Rose offers the jewels to the mummy who hands her a small box. Tyzonn says the box isn’t registering a reading. But once they actually open it, their Trackers go off as they see the Pink Emerald is inside it. Rose says the box probably had some metal that blocked the jewel from their trackers.

Rose thanks the mummy. But it suddenly explodes as Chillers storm the mansion. Flurious laughs as he makes his grand entrance. He thanks Mr. Hartford for finding all the jewels for him. “I’ll remember you fondly.”

Flurious orders the Chillers to attack and the Rangers battle them all over the mansion. But they have some trouble against the huge army. The Rangers morph and get the extra firepower they need to take care of the Chillers, though the mansion is left in pretty bad shape. 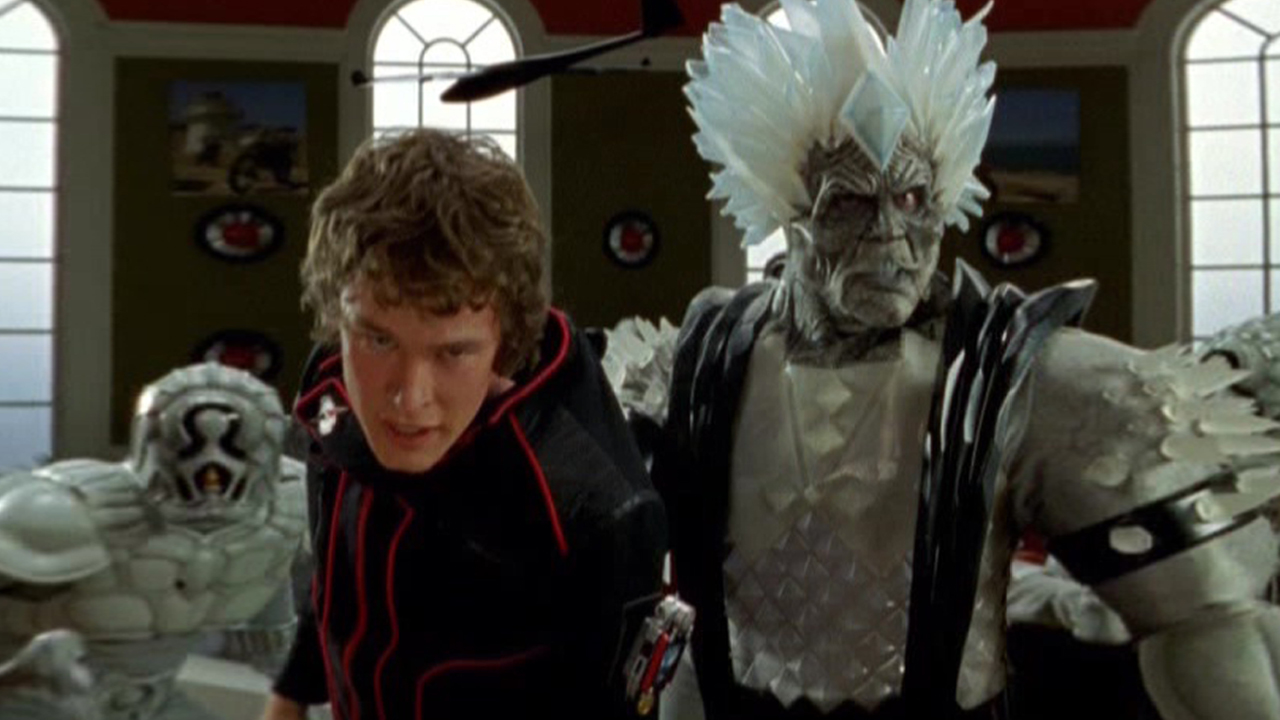 Flurious shoots at Mack and forces him to demorph before he grabs him and demand they hand over the jewels. 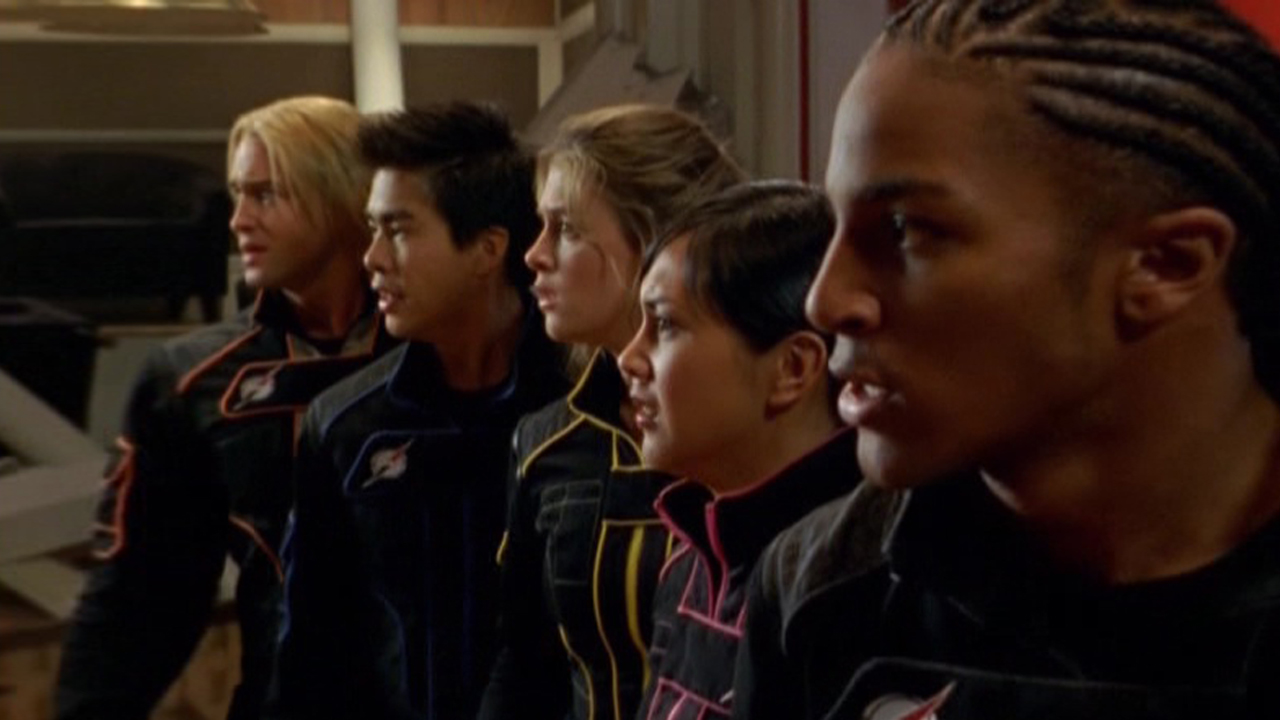 Mack tells them not to do it and to keep fighting. “I’m not important!”

“You are to me,” Hartford says. He hands Flurious the Pink Emerald. The other Rangers step forward, but Mack pleads with them. “That’s everything we’ve fought for!”

Will says sorry, but they all believe Mack’s life is important to them too.

Later, Mack approaches his father to ask why he just gave the jewels up like that. Hartford tells him that he couldn’t sacrifice Mack just for them. If it meant it would give him another day, another hour with Mack, he would give it all up. 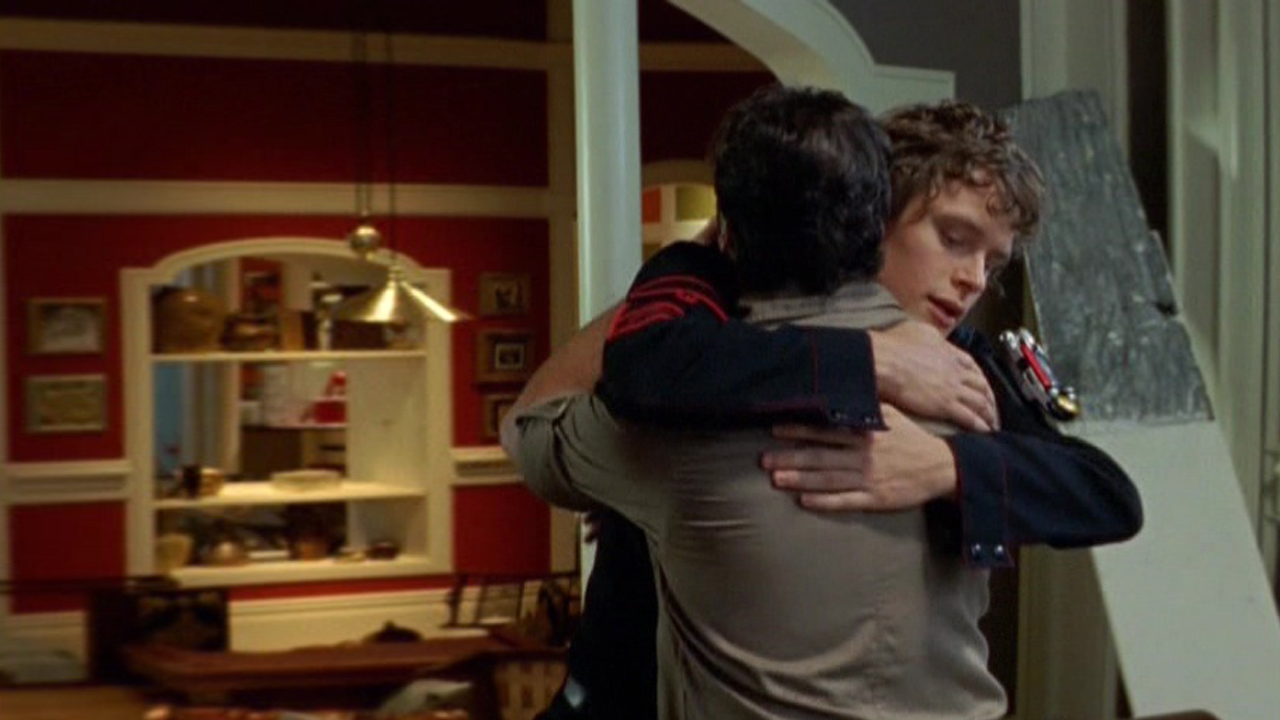 After the happy reunion, Hartford says that as long as they’re still breathing, this is not over yet. 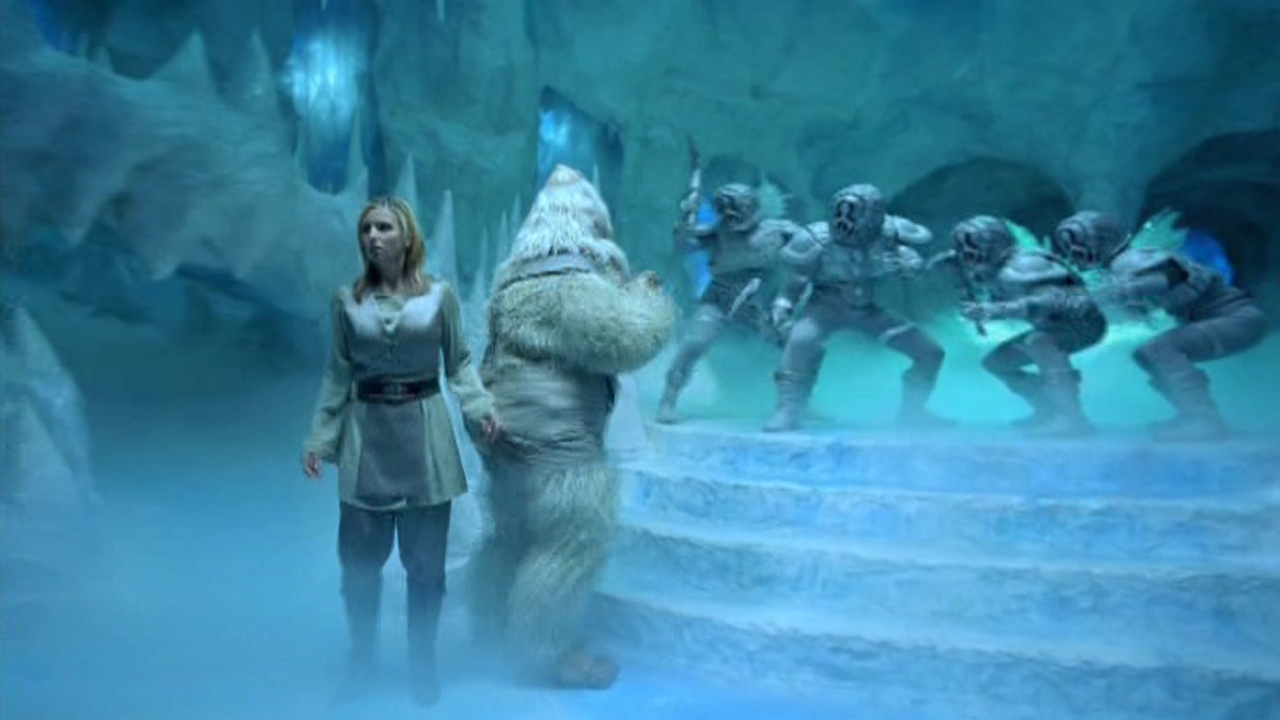 Meanwhile, Flurious addresses his army of Chillers saying it is time they conquer this world. Norg asks if he can come with Flurious, but Flurious says he no longer needs Norg’s uselessness. Flurious orders some Chillers to “take care” of Norg and Vella.

As Flurious and the army of Chillers leaves the ice lair, Norg is excitedly thinking about how the Chillers will take care of him and Vella. But Vella clues him in that by “take care,” Flurious means to kill them.

Norg refuses to accept that and begins to take on the Chillers.

Back at the mansion, Hartford rallies the Rangers, telling them how proud he is of them and how he couldn’t have chosen a better team. But now, it’s time for them to take back the Crown. Spencer detects strong jewel signatures, pointing them to Flurious’ location.

The Rangers hurry out. Spencer tells Hartford that he raised a fine boy.

Flurious lays the jewels out in front of the Crown and they revert to their original forms. He places the jewels on the Corona Aurora.

But the Rangers arrive and defiantly face Flurious. As they prepare to morph, Flurious summons a new ice age. All of San Angeles, including all its citizens are frozen in ice. But the Rangers break out of the ice and are able to morph.

Flurious places the Corona Aurora on his head and he gains a terrifying new form. The Rangers charge toward Flurious and do their best to try and counter his immense new power.

Flurious holds out and embiggens. The Rangers hop into the Battlefleet Megazord, but Flurious makes quick work of them. The Rangers are forcibly ejected from the zords and forced to demorph.

Flurious shrinks back to normal size and summons hundreds more Chillers. He says no human could ever beat him while he has the crown. Mack steps forward and says no human might not, but he can.

Mack walks toward Flurious and morphs. He turns to the others and tells them to handle the Chillers while he goes for the crown.

The Rangers charge into battle. As they fight off Chillers, each of the Rangers morph. Mack upmorphs to Sentinel and the Rangers finally gain the upper hand.

Mack delivers a finisher at Flurious. San Angeles is unfrozen as the Rangers finish off the last of the Chillers.

Flurious has returned to his original form. He motions to pick up the Corona, but Mack grabs his arm and sends him flying back. Sentinel Knight cautions Mack and asks what he’s doing. Mack says he’s using all the power he has. 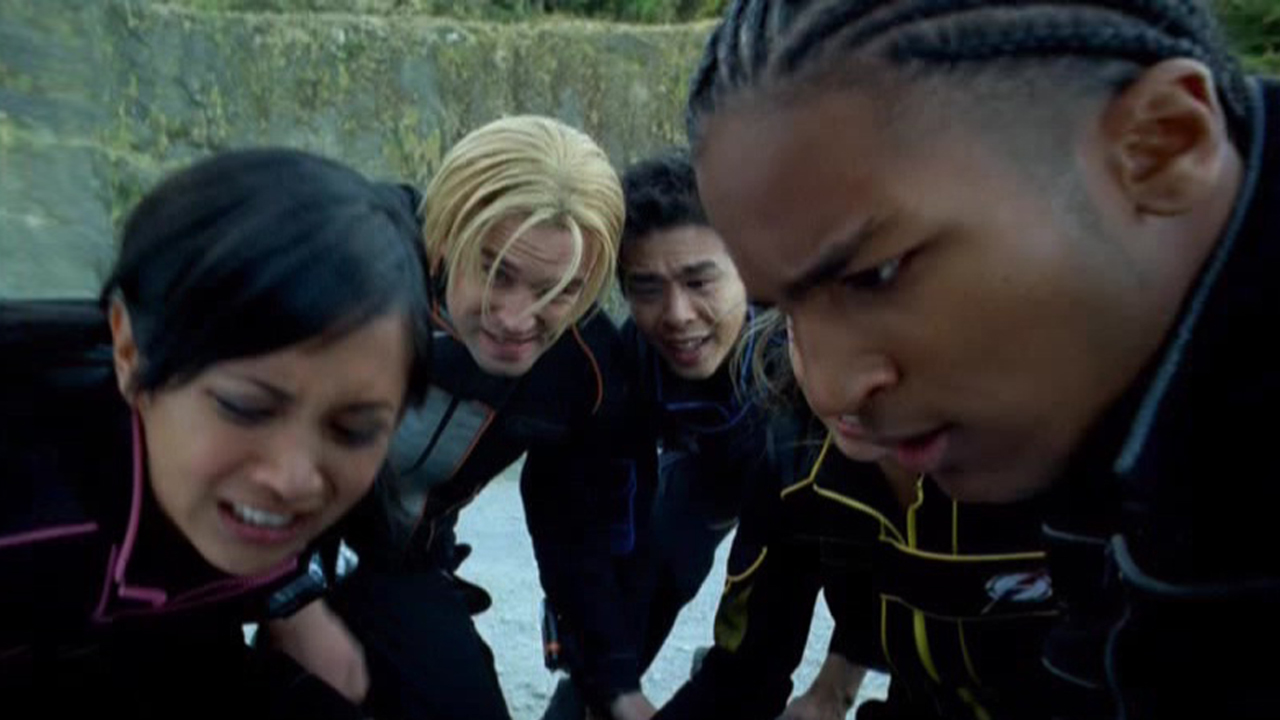 Flurious cannot believe it. But Mack finishes him off for good.

The other Rangers celebrate the victory. But they are shocked when they see a lifeless Mack on the ground. They rush him back to the mansion. 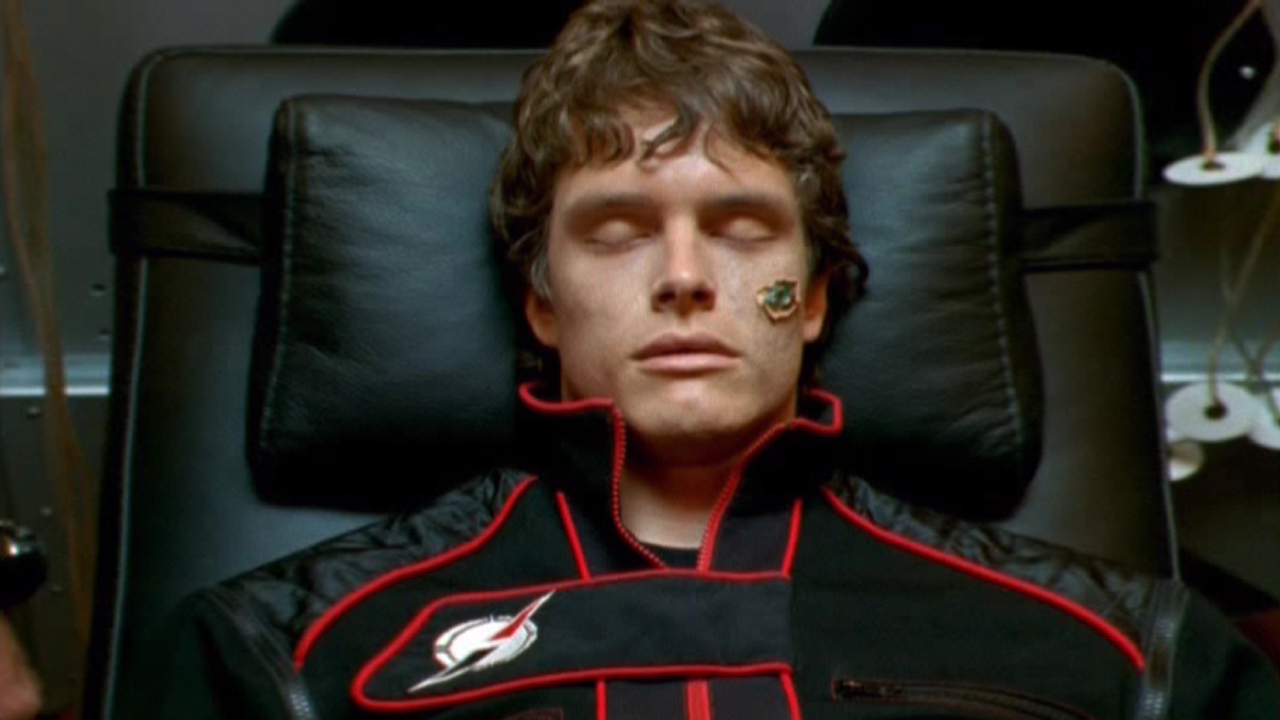 Hartford and Spencer analyze him, but Mack is gone. The Rangers refuse to believe it. Ronny says Hartford built Mack once and he can do it again. But Hartford says it wouldn’t be the same Mack.

Just then, Sentinel Knight appears and says with the Corona Aurora back in the right hands, he has returned to his true form. And it is all thanks to the Rangers. “The universe will forever be in your debt.”

Sentinel Knight notices they are not happy and sees Mack’s lifeless body. He commends Mack for sacrificing his life in service to the universe, all to protect the Corona Aurora which can not only take away life, but restore it as well. 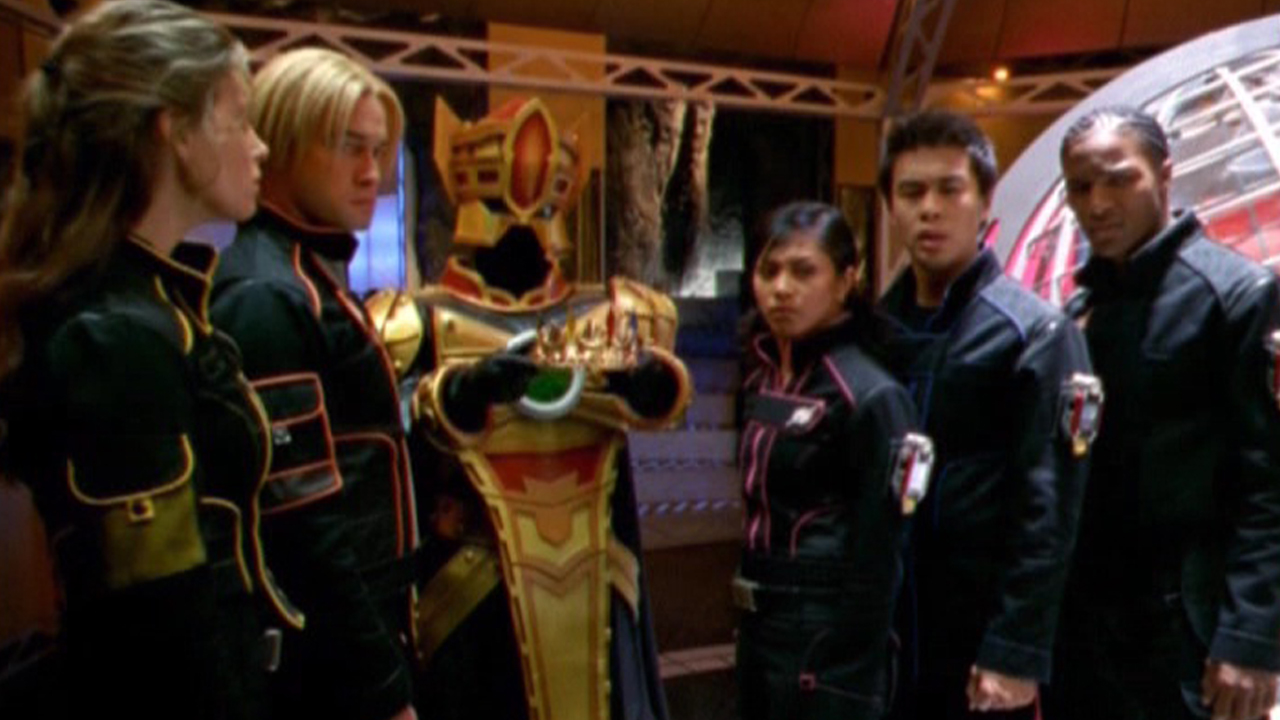 Hartford says it’s no use to Mack as he was never “alive,” but just a machine. Sentinel Knight doesn’t believe it. He says Mack fought with heart, yet they are telling him he had none even when he saw it with his own eyes.

Sentinel Knight asks Hartford and Spencer to sit Mack up. He places the Corona Aurora on Mack’s head and it begins to light up.

Suddenly, Mack’s body is healed and he opens his eyes. He sees everyone starting at him.

Mack is shocked to be able to feel a heart beating inside of him. Everyone is overjoyed.

A while later, the Rangers say their goodbyes. Rose says she is going back to teaching and Ronny is heading back to the track. Will says he learned that there’s no “I” in team. So he will be training a team of “artifact recovery specialists” to help in his work. As for Dax, he has decided he wants to direct movies.

Tyzonn says he will search the galaxy for Vella. But Spencer surprises them with Norg and Vella who have arrived. Tyzonn and Vella share a happy reunion while Spencer is annoyed that Norg ate all his geraniums. Hartford promises to buy Norg more.

Ronny asks what Hartford and Mack are going to do now.

Next we see of the father and son, they are off on their latest dangerous treasure hunt expedition.

Definitely a very fast-paced, full final episode. One of the criticisms about it is that the finale was only one episode instead of the usual two-parter. But that actually works for Operation Overdrive considering its serialized nature. Every episode ended with a cliffhanger and would lead into the next one.

So unlike other seasons where the endgame doesn’t even get mentioned until the almost-separate two-part finale, Operation Overdrive essentially had a 32-part finale. I’m kidding, of course. But essentially, you’re watching all 32 serialized episodes. A clear beginning, middle and end. And this was the climactic end.

Climactic it was too. It was jam-packed with action and emotion.

First off, you gotta love some good finale command center destruction. That first battle was bonkers, in a good way. Just ravage the entire set one last time. It was very exciting and a fitting start to the episode.

The idea of having the final jewel right under their noses too was great. You’ll always find what you’re looking for where you least expect it. So it was a great way to cap off their worldwide jewel quest.

Later, Norg taking on the Chillers to save himself and Vella was pretty exciting to see. It’s the perfect culmination of a season of abuse from Flurious. And seeing Norg go on a rampage like that was fun.

All the other action sequences were even better. The Koichisplosions were put to good use. Excellent use actually. The scenes were indeed explosive. Fight choreography was on point. And you could tell which was New Zealand footage and what was Boukenger footage because the original NZ footage featured much more dynamic and explosive scenes. Which is definitely the opposite of what we see on today’s Power Rangers.

For a final battle, you want to see explosive craziness. You want to see people getting knocked around. And they delivered on that front.

Perhaps one of the most iconic moments were the Rangers insta-morphs during that final battle. That has to be one of the best morphing sequences/scenes from any season of Power Rangers ever. That entire scene was so well done and definitely feels like an epic moment. An excellent sequence of badassery from the Rangers. Rose and Ronny’s morph was especially amazing. But the Rangers morphing by slashing their morphers on Chillers, boulders and each other really set the tone.

Mack’s sacrifice of course is huge. A pretty dark turn and darker than most seasons of Power Rangers would even attempt. But that too was a perfect culmination to his story. It’s a pretty bold story to even try on Power Rangers. A robotic soldier on a suicide mission to save the world. It had that emotional impact thanks to the excellent development ever since the iMack reveal.

Though Flurious’ demise felt rushed in the end, the focus was really more on Mack and everyone’s reaction to his initial “death.”

I still remember first watching the moment Mack became a real boy on the day it first aired. Some may say it was cliché and Disney-fied or whatever. But it worked. It hit the mark. It was emotionally satisfying and very exciting. A sincerely happy and joyous moment. Something that you don’t see quite often on Power Rangers either.

At least, not without the strong foundation this season built to lead up to this moment. That moment would absolutely not work otherwise.

But it did work. And it was excellent.

The epilogue was fine. A quick look at what everyone would do in their post-Ranger life.

Overall, this was a great finale. A truly exciting finale with actual stakes and sincere emotion. It was a great way to end this season. Thoroughly satisfying and very exciting.