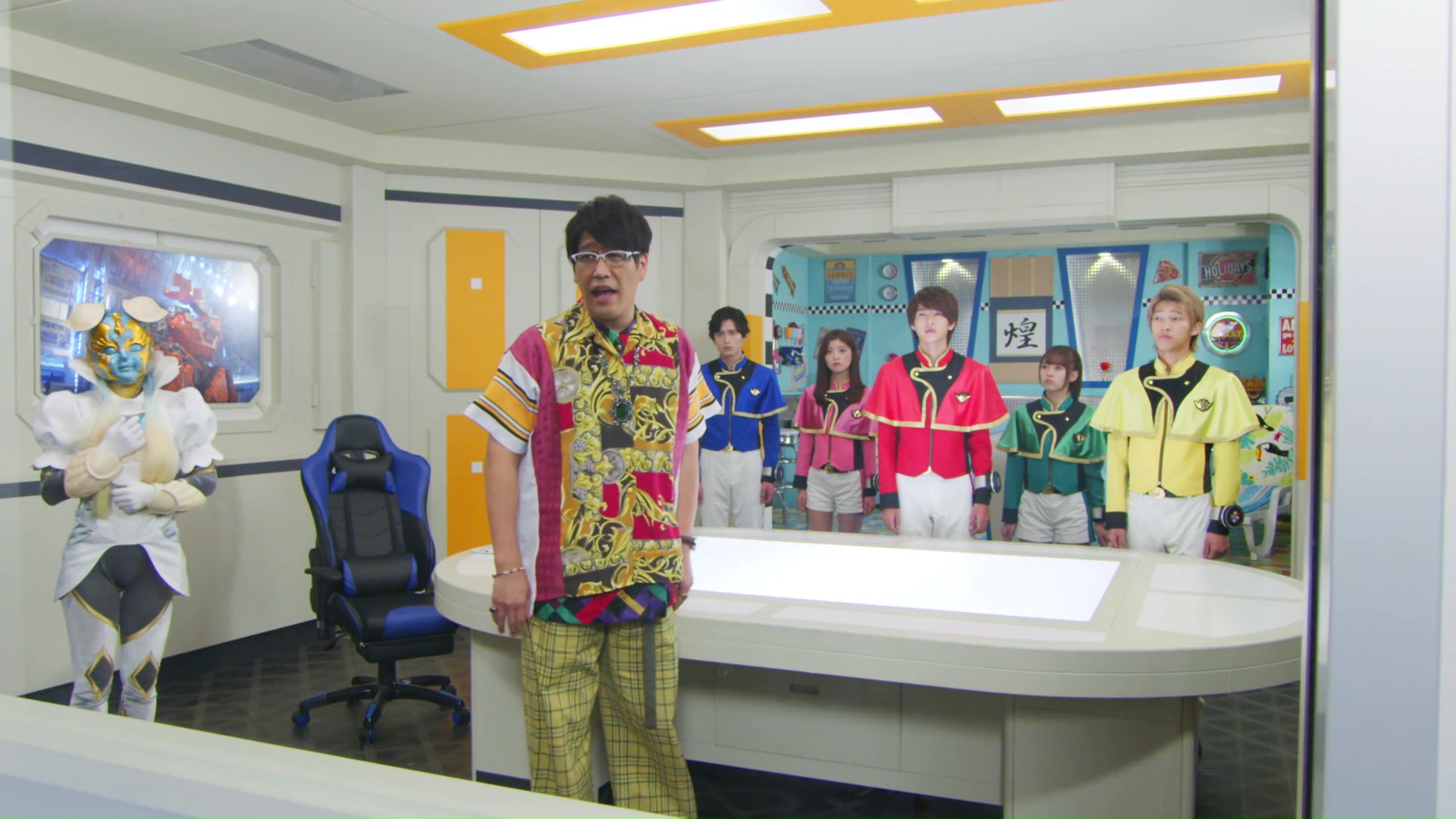 A Hammer Jamenju, which somehow appeared before a Jamenshi, slips through the Kiramagers’ hands. Back at the coconut tree, Muryou informs them Drijan can turn into a Grand Guardian like Kiramaizin and King Express. But to do that, they need a Silver Kiramai Stone to power it up.

Just then, Takamichi comes stumbling in saying he’s found the treasure he’s been searching for. But it involves a mansion and its owner who requires anyone to play through a game in order to reach the treasure inside.

The mansion’s master presents him a table of gold. But Takamichi is more interested in a stone attached to a grandfather clock. He gives the game a try, but is unable to get past the Whac-A-Moles. 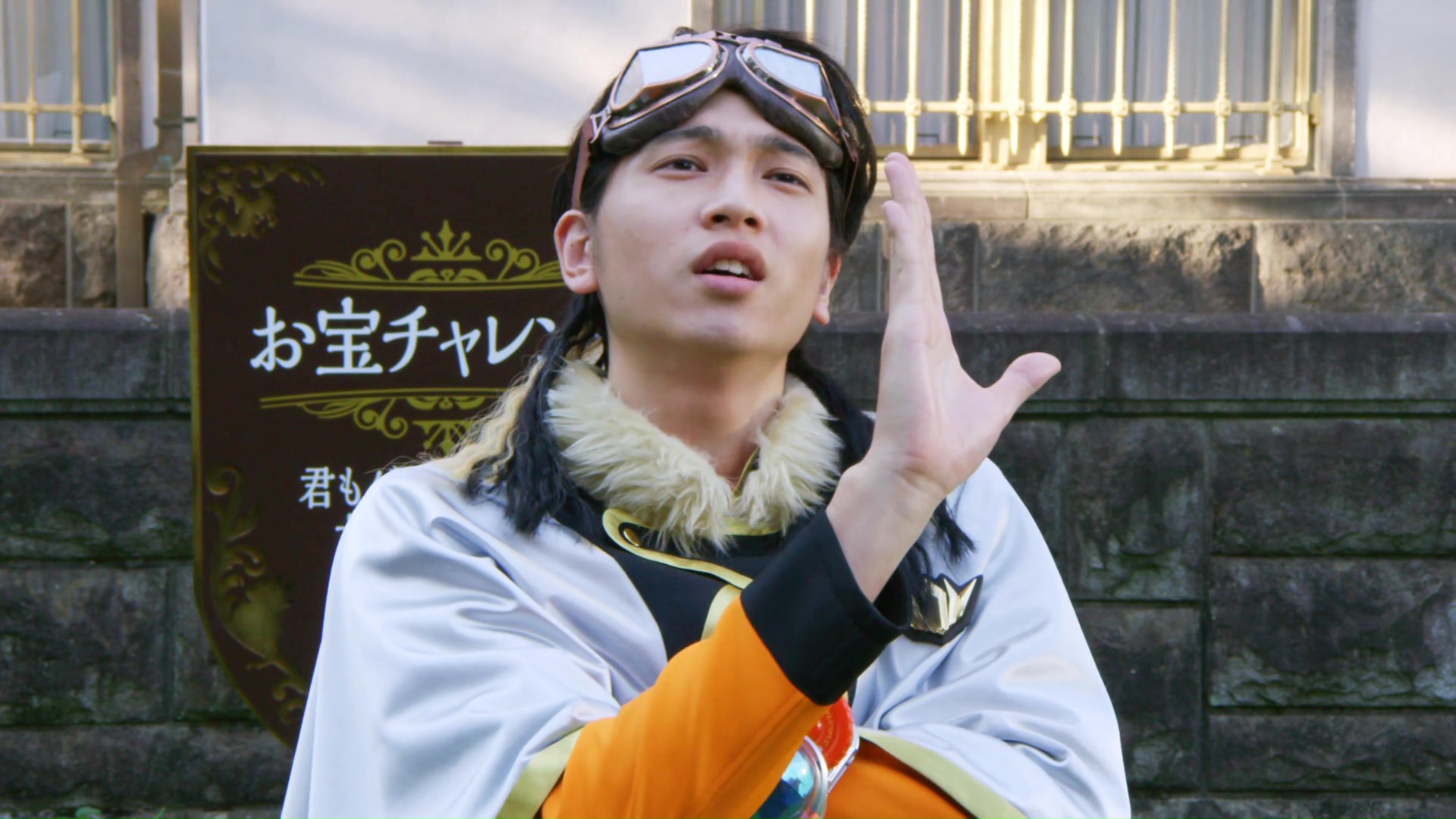 Takamichi asks if Tametomo can help him. Mabushina scolds her brother and wonders why he is so reckless when it comes to treasure. Takamichi says this is very important to him. But Mabushina says she does not want him to involve the others in his “selfish” pursuits.

Tametomo comes forward and says he’s willing to help. He speaks privately with the others before they head out to the mansion with Juuru joining them as well.

Tametomo henshins and calls Shove-ji to join them, but as a Kiramai Stone. Juuru has already had a Hirameking off-screen upon Tametomo’s request. And that allows Shove-ji to turn into Yellow Stone Hammer.

Tametomo uses the Shove-ji Hammer to clear the first round of Whac-A-Mole.

The mansion’s master hops down, surprised that they are actually Kiramagers. He reveals his true self as being Mogura Tataki Jamen.

Tametomo had already figured most of it out based on Takamichi’s information. The Jamenshi lures humans into unsuccessfully playing for the treasure and then traps them in cards in order to collect the Darkness.

Having found the Jamenshi, Juuru calls the others. But Carantula sends the Jamenju back to town. Juuru has to leave to join the others and tells Tametomo they’re one call away.

Tametomo asks Takamichi what his treasure hunt is all about. Takamichi hesitates, but explains that the gem inside the mansion is a Kanaema Stone. Shove-ji explains that there are four such stones in the universe and together are the ultimate treasure.

They ask why Takamichi is after the Stone. But he says he’ll tell them only once they obtain it.

Tametomo points out how Takamichi has continued to be closed off despite vowing to fight alongside them. He says it’s about time someone find the key that will unlock Takamichi’s heart to them.

The guys make their way to the next stage inside the mansion and are met by Bechats and the Jamenshi. But much to their surprise, Garuza pops out as well. Tametomo tells Takamichi to leave the game to him. They both henshin.

Tametomo fights his way to the top floor of the mansion. Along the way, he gets mysteriously slimed by a defeated Bechat all as the Jamenshi laughs.

Takamichi and Garuza take their battle outside. But Garuza leaves after he shoots some mysterious thing into Takamichi.

Takamichi hurries inside and it turns out one of the Bechats unleashed a poison on Tametomo that will paralyze him as it spreads through his body.

But Tametomo says he will never give up. He is here representing the Kiramagers while his friends are putting their lives on the line in battle. 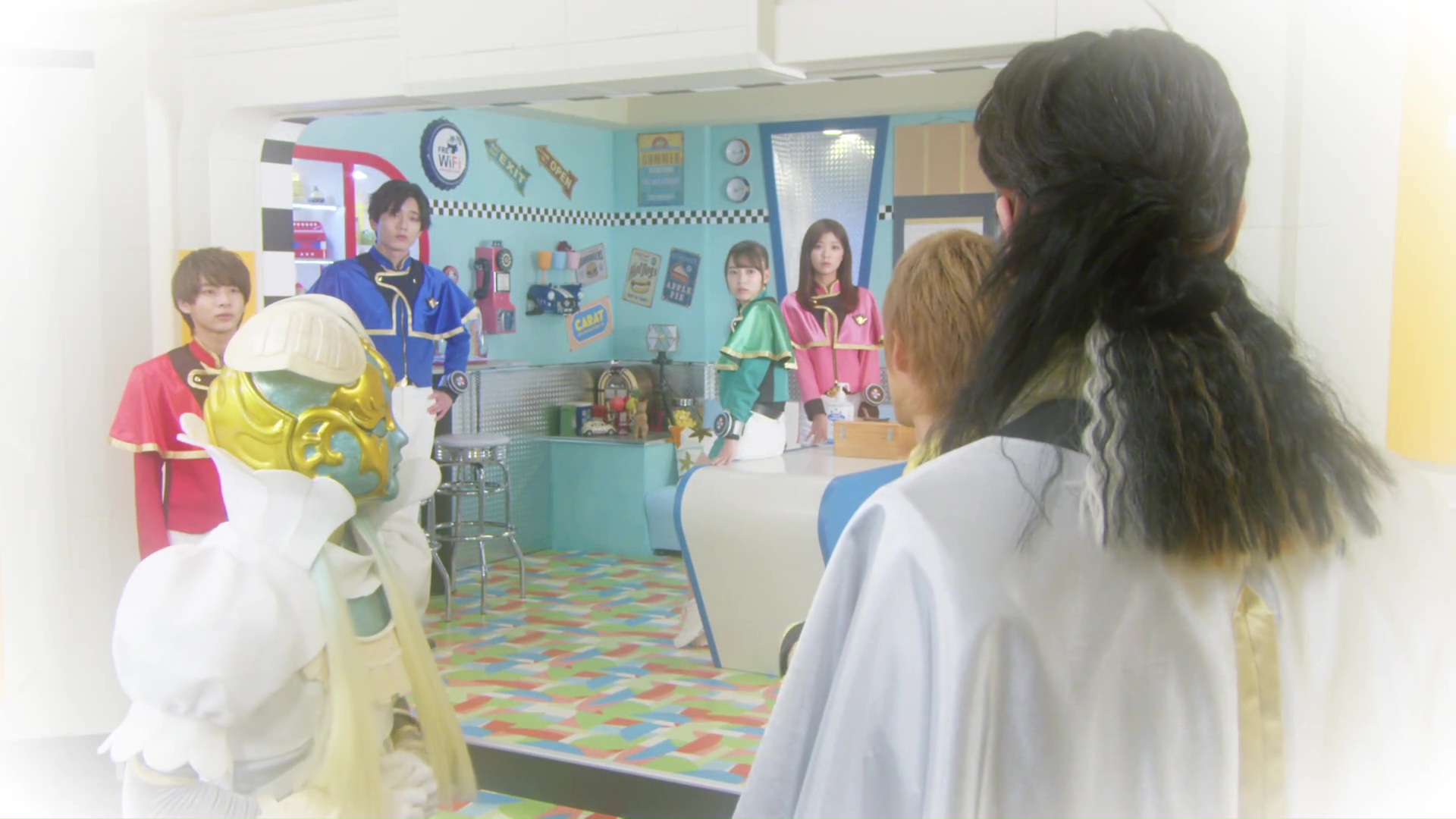 Earlier, the Kiramagers agreed that Takamichi wasn’t treasure hunting for selfish reasons and decided they would help him with his quest as it’s best for all of them to be kirakira. Takamichi can’t believe the others would put his treasure hunting first.

Tametomo believes this way, both he and Takamichi will get what they want. And what Tametomo wants is for Takamichi to open his heart as full member of the team.

Just then, Tametomo realizes what he needs to do to defeat the Jamenshi. He and Shove-ji are able to overcome the poison and together they deliver a decisive hit on one of the Whac-A-Moles. Tametomo figured out the Moles were connected to the Jamenshi itself. Thus attacking the small moles would be a direct hit at the Jamenshi. 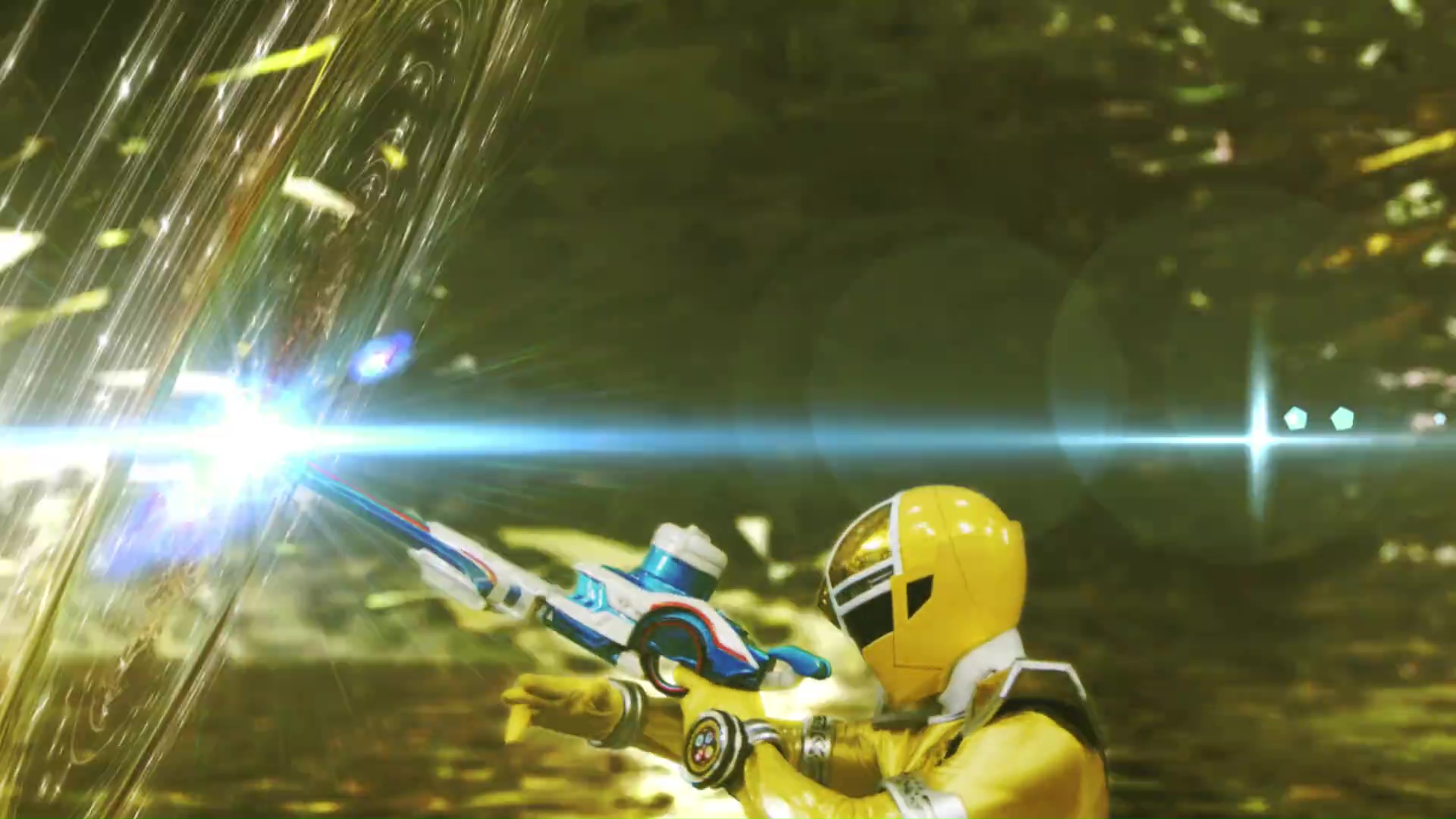 Shove-ji returns to normal and Tametomo summons Kiramai Buster to finish off Whac-A-Mole Jamen for good. That allows the card people to return to normal as well.

Tametomo says he and Shove-ji have to go and help the others and Takamichi can stay to retrieve what he came here for.

The others are struggling against the Jamenju. But much to their surprise, Takamichi has accompanied Tametomo here even before he was able to grab the Stone.

Takamichi says of course he will prioritize fighting alongside his friends. He thanks them for what they did for him earlier. Tametomo is happy to see he was able to get what he wanted, Takamichi opening his heart to them.

While the others form Kiramaizin, Takamichi and Drijan move forward to try and wear the Jamenju down. But it backfires and the Jamenju bounces back to knock Kiramaizin on its behind.

The Jamenju approaches Drijan and a worried Mabushina calls out to her brother. Takamichi remembers the happier times he had with his little sister and somehow that memory powers him up. He realizes that now that he has friends he can open up to, he can and will change.

Takamichi says that’s it! He will use the Kiramai Stone inside of him to become a Grand Guardian himself.

Takamichi activates a shining Wonder Change to turn himself into a Silver Kiramai Stone. This way, he and Drijan can combine to form Gigant Driller.

Mabushina says this is a wonderful miracle!

Takamichi and Drijan as Gigant Driller make easy work of the Jamenju. 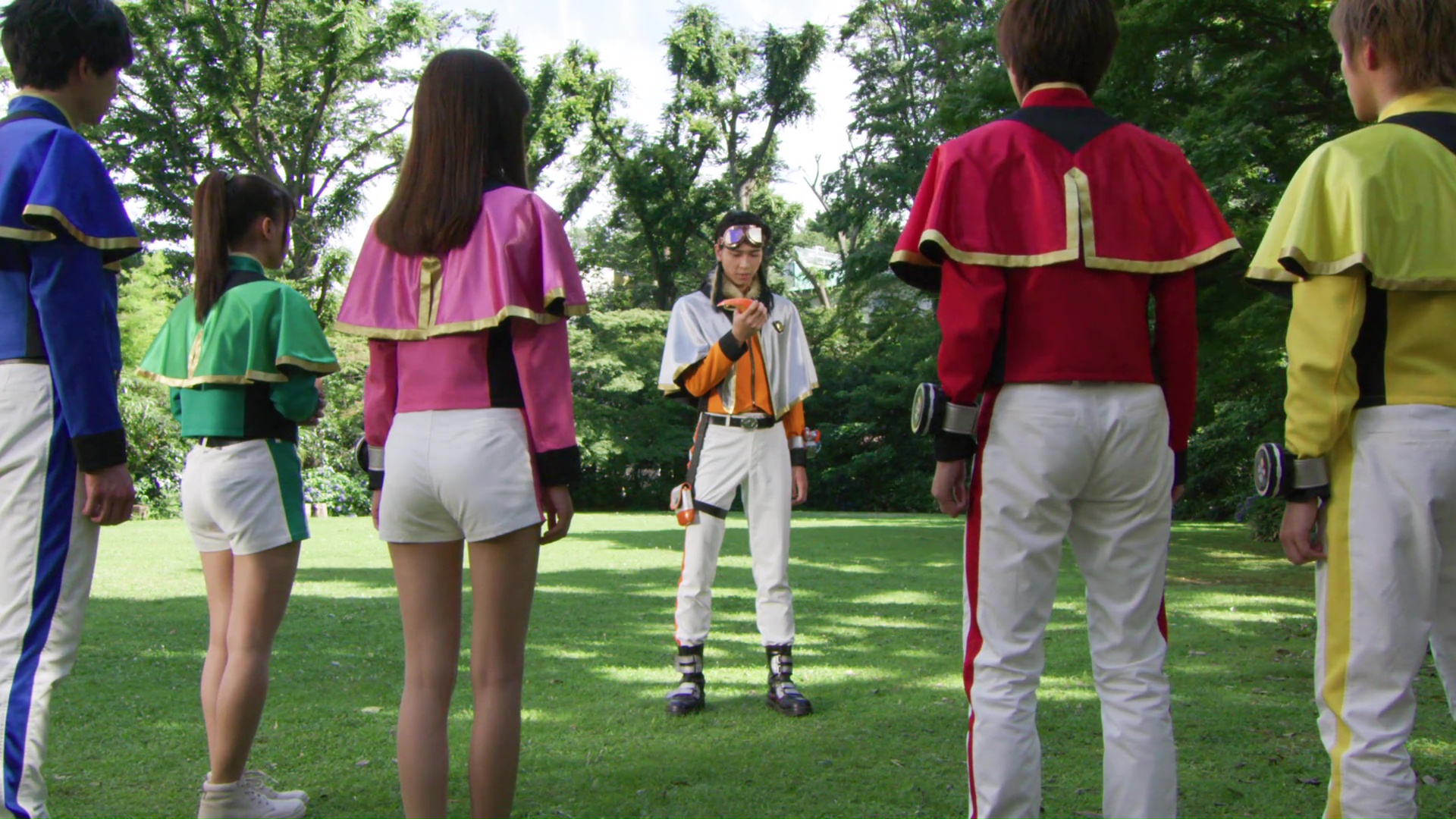 Later, Takamichi heads to the mansion to finally retrieve the Kanaema Stone. He finally explains to the others that when the four Stones are gathered, they can grant any wish.

Takamichi says thanks to them, he has been able to realize many things. But what he’s about to tell them must stay between them, the Mashins and Muryou only.

The others realize Takamichi has specifically left out Mabushina.

At the coconut tree, Mabushina opens a chest containing a crown(?) seemingly belonging to her mother. Speaking to her through it, Mabushina excitedly wants tell her all about what Takamichi has accomplished. 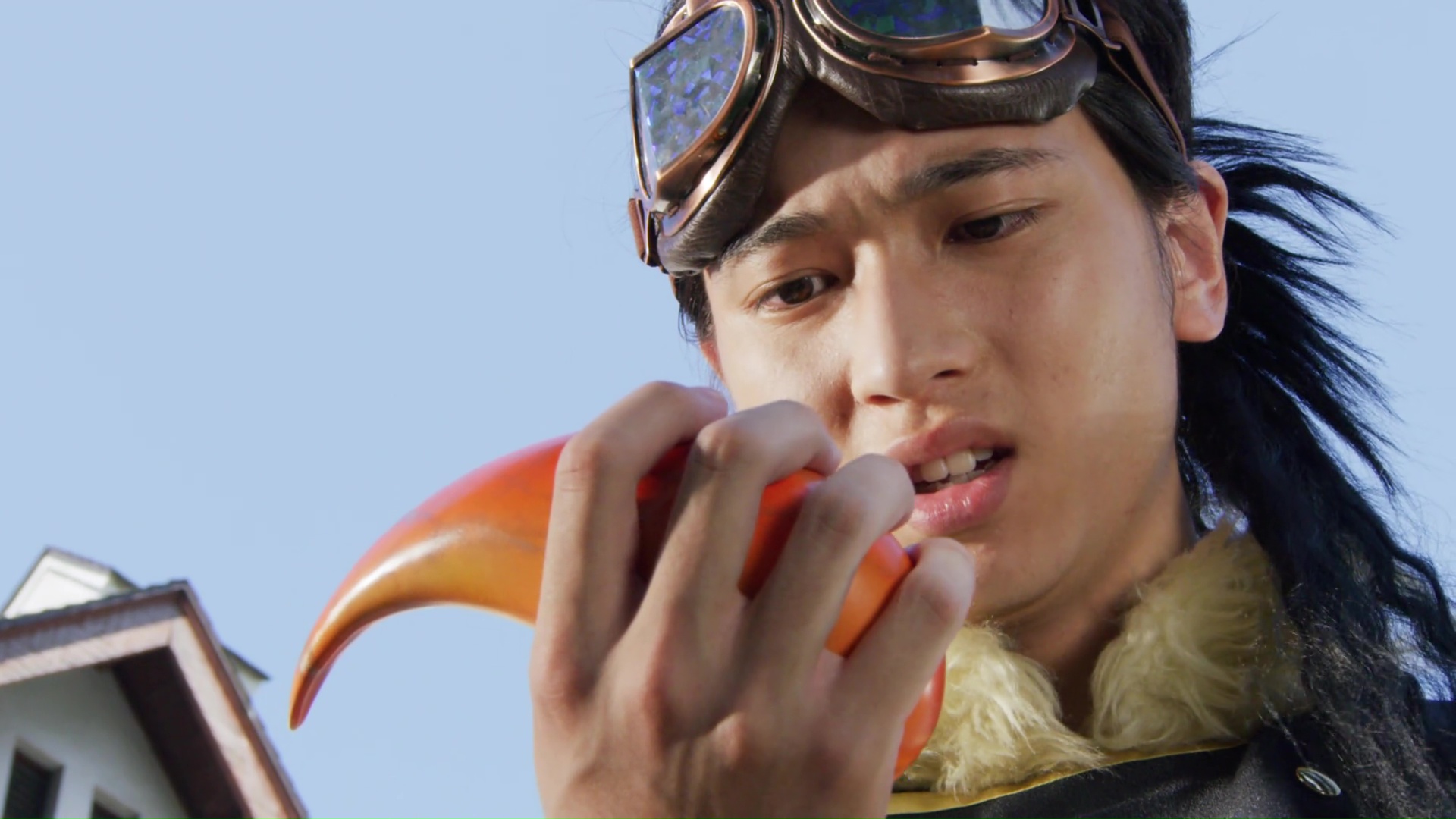 Back at the mansion, Takamichi says the only thing he wants is to save his sister. And if he doesn’t do something, Mabushina will be lost forever thanks to a curse of darkness.

Much later, Shove-ji suggests Tametomo also turn into a Stone, but that’s not possible.

Wowowow! Now that was a shocking ending!

The episode started off pretty silly and was looking like another light, fun episode. But boy did they throw another curveball with the great character moments between Takamichi and Tametomo. That would’ve been enough for me. But then they go and throw a changeup that took me completely by surprise.

Thematically, it was a wonderful episode. Tametomo wanted Takamichi to open his heart to them. Even though they trust him as part of the team, they felt like he was holding back. And they knew that this treasure hunting was more than just a simple leisure activity.

For Takamichi, opening up and opening his heart was unloading the huge weight on his shoulders to not only reveal the danger to his sister, but also his sincere feelings for her.

I admit, that was definitely a MaGMCM for me. And it came at the most unexpected moment. I definitely wasn’t expecting such an emotional reveal at Episode 17!

The Kiramagers, especially in the episodes since coming back after the hiatus, have all gotten some great character development and focus. Tametomo got a great semi-focus here.

But the Crystalia Sibs have really been the best characters this season so far. Mabushina being such a great character on her own and getting the same level of depth as the Kiramagers themselves allowed for this surprising revelation to really be emotionally effective and hit the mark.

Not to mention of course this being the big reveal of what Takamichi’s secret motive was. His need to hurry and not waste time is put into a different and very meaningful light.

Okay fine. So then within a few seconds I wondered if Takamichi was hoping to wish King Oradin back alive. But then we see Mabushina expressing herself to her (I assume) dead mother and I thought maybe Takamichi wanted to bring the Queen back to life for his sister.

But nope. He actually wants to save his younger sister from a fate drawn about from the Darkness.

I lost it right there. What a heartwarmingly shocking revelation. I think that whole sequence was perfectly executed. And again, this coming at the end of an episode that effectively played out the idea of a 6th Ranger opening himself up to the others.

If that’s all that happened in this episode, then it would’ve been enough to make it a great one. But this episode also contains the debut of the 6th Ranger’s mecha. And talk about another surprise!

When they talked about a Silver Kiramai Stone at the beginning, I was like “Doesn’t Takamichi have one in his body? Can’t they use that?” Later I realized they can’t remove it even if they knew how, or he’ll die of course. lol But I definitely didn’t expect that Takamichi himself would actually turn into a Kiramai Stone. I thought maybe use his Stone energy to power up the transformation somehow. But turning himself into a Stone then Mashin to combine with Drijan? Did not see that coming!

Needless to say, A LOT happened in this episode. We didn’t even mention Garuza doing something to Takamichi that will seemingly play out next episode.

A lot happening. A lot of it unexpected. All of it so good!