Dean fills Sam in on what’s been happening while he was out, including having Crowley in the trunk.

While Abaddon is being restored into a new vessel, Sam and Dean return to the batcave. Kevin recounts his harrowing days alone, locked down inside after the machines went crazy. But his relief turns into worry when he sees Sam hauling Crowley inside.

The Bros have him tied up and demand he tell them the name of every single demon and their vessel that is on Earth. Crowley laughs, saying they would’ve closed the gates of hell or killed him already if they really wanted to. Sam says he saw him breaking during the cure and that maybe a part of him is still human.

But if no info, then they can torture him. Crowley welcomes the possibility.

“Can’t wait to see Sam in stilettos and a leather bustier, really putting the S-A-M into S&M.”

What’re you going to do to me that I don’t do to myself every Friday night, just for kicks, he asks.

The Bros smile, turn off the light and leave him in the dungeon.

Back upstairs, Kevin is hysterical. Why isn’t he dead? They explain that they need him so they can take care of every demon left on Earth. And he will break and tell them. They just tell Kevin to stay away and in the mean time, try to see if the angel tablet has anything that could reverse the falling.

Elsewhere, Abaddon is trying to round up some troops to back her up when she storms into hell as its new queen. She tries to convince them they shouldn’t be paying (in the form of deals) for what they should be taking. One of the demons in a grandma meat suit is a little defiant, saying she wants proof Crowley is dead. But Abaddon decides to send her back to hell with the message that the queen is coming.

So now she has three soldiers and it is only fitting they actual military men as their new meatsuits.

While Abaddon’s new men capture a sexy hunter hunting a vampire, Sam and Dean head to the scene of where the demons leave their old vessels.

But the local sergeant doesn’t think the FBI should be anywhere near this case and demands a chat with their boss. Dean calls Kevin, who has no idea what’s going on at first. The sergeant even thinks his voice is too young, but Kevin, Kevin Solo, hacks into the military network to find pics of her doing body shots off a naked man in a luchador mask in Cabo last June.

She backs off like a scared little puppy when Kevin says he’ll send these pictures to her commanding officer if she doesn’t give Sam and Dean clearance.

Dean gives Kevin a “Good job buddy.” and joins Sam in the bus looking at the meatsuits. The sergeant shows them surveillance video of the scene and they are surprised to see Abaddon on it.

Meanwhile, Abaddon is trying to torture a hunter into telling her where Sam and Dean are. He eventually gives her Dean’s number which she calls and Kevin answers.

Kevin quickly calls Sam and Dean and tells them she has two hunters in her custory (Tracy, the sexy hunter from earlier and Irv, a good hunter friend of Bobby’s). Dean asks Kevin to look up info on knights of hell.

Sam and Dean drive over to Oregon, the coordinates Abaddon gave.

Down in the dungeon, Crowley is still alone with his thoughts. The lights come on and it is Kevin in the next room. He taunts him and Kevin decides to face him and unleash his anger over Crowley killing his mother.

Are you sure she’s even dead? Crowley asks. But Kevin punches him.

Sam and Dean find Irv and Tracy, make sure they aren’t demons and try to prepare for Abaddon’s men. This whole time, Tracy is pretty hostile toward Sam and she reveals she watched her parents be killed by a demon who couldn’t stop talking about celebrating some “dumb kid” who let Lucifer out of his cage.

Crowley uses his salesman pitch on Kevin. He offers to give Kevin his mother back if he lets him out. Trying to convince him, he says Sam and Dean are only using Kevin for their needs and would dump him for the next prophet when they’re done with him.

“I may be the one in chains, but we’re both prisoners here.” 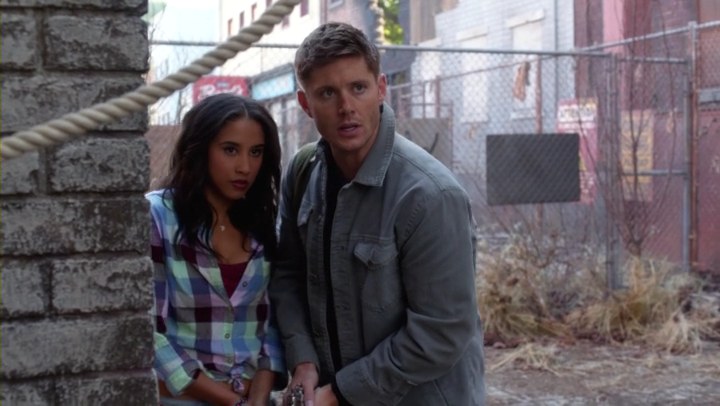 Irv gets shot and killed and Sam gets knocked around by the three soldiers, while Dean and Tracy run into Abaddon.

Dean gives Tracy the keys to the Impala and tells her to go get more bullets and weapons. That leaves Dean alone with Abaddon who easily gets the upper hand and demands Crowley’s head. But she also gets the idea of using Dean’s body, which she definitely likes, as her new vessel.

Inside the diner, the soldiers have Sam all banged up, but suddenly his eyes light up (literally). It’s Ezekiel. He stands up, glows, spreads his wings and blows the soldiers up.

Abaddon is shocked. She hurls Dean into a clothing store window and leaves.

Dean hurries into the diner and Ezekiel says he protected Sam. He was knocked unconscious and will not remember any of this. 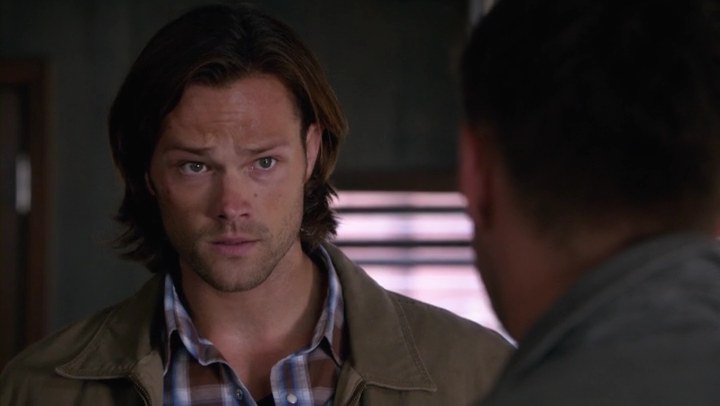 Winchester BrosDean and Ezekiel Emo Moment of the Week
Ezekiel senses Dean is still troubled. Dean feels guilty about talking Sam out of closing the gates of hell. But Ezekiel understands Dean did it out of love which is why he said yes to this set up.

“I’m trusting you Zeke. I just hope you’re one of the good guys.”
“I am. … Dean Winchester, you are doing the right thing.”

A little later, Sam wakes up and Dean says he took care of the demons.

“Geez, you are pretty damn awesome.”

Tracy drives up in the Impala and they leave the abandoned town.

Sam and dean head back to the batcave and call for Kevin, but no answer.

They hurry down to the dungeon and see Crowley there, but all bloodied up. He gives them two names of low level demons and offers another deal, implying Kevin has run off.

Winchester BrosDean and Kevin Emo Moment of the Week
Dean finds Kevin upstairs, bag packed and ready to go. Kevin tells Dean about Crowley saying his mother may still be alive. Dean says even if she is, she is dead in every other sense.

Dean says he understands what he’s going though, but this is the safest place for him.
“And we need you man.”
“Cuz I’m useful.”
“Because you’re family. After all the crap we’ve been through, after all the good that you’ve done… Man, if you don’t think we would die for you, I don’t know what to tell you. Because you, me, Sam and Cas, we are all we’ve got. But hey, if none of that matters to you, then I won’t stop you.”

Dean tells Sam that he’s helped more people than he’s hurt and that’s all in the past. He proposes they toast to now.

They toast and Sam asks if Dean is ready for it… fallen angels, Abaddon, halo-less Castiel, Crowley in the basement.

Dean asks how Sam’s doing and he replies that he’s felt better than he has in a long time. He has friends, family. He’s happy with his life for the first time in like, forever.

Episode Thoughts
Wow, this was an excellent episode. Even if only for that last act. I started getting a little teary eyed, especially with Dean’s pep talk for Kevin and reassuring him that he’s part of the family.

Osric Chau was especially great this episode and great to see Jared get a chance to play a slightly different character too.

Paired with last week’s episode, it definitely kept the momentum and helped really setup what should be a full season. (I hope.) Everything from Crowley’s humanity, Kevin’s insecurities, Sam’s guilt, Dean’s guilt to all the big arc stuff like Queen Abaddon and the fallen, there’s plenty of stories that can be told this season. There shouldn’t be a filler in sight!

A great start to season so far.

Miss the episode or want to watch it again?
Download full episodes of Supernatural on

Also order Season 8 on Blu-ray and DVD at