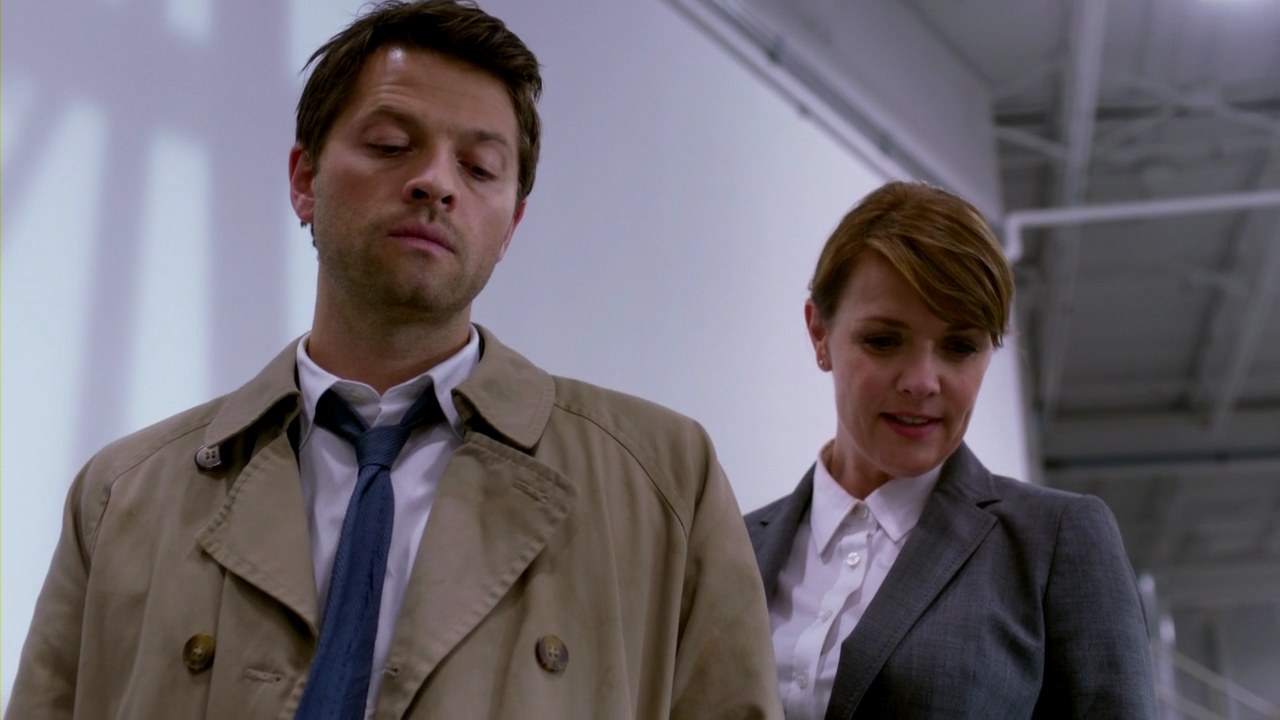 Castiel sticks an angel blade right into Dean’s chest.
Training. Naomi walks into a large room of dead Deans saying Castiel is finally back to normal and now able to kill a Dean without hesitation.

Real Dean’s in the bat cave sorting through boxes of artifacts while Sam coughs up blood. Dean finds a vintage Voluptuous Asian Lovelies magazine, but to more important things, Sam finds a bunch of dead bodies with eyes burned out and punctured hands all over the Midwest.

Before they head out, Sam gives Dean 10 minutes with the lovelies, but Dean notices the tissue of blood in the trashcan.

On the job, Sam and Dean talk to the victims’ families and friends and put together that they were all demons, seemingly looking for something until they were mysteriously ganked.

They end up talking to a woman who says she was contacted by one of the victims asking about a map of the original city and the location of an orchard lost when the city was wiped out by a flood.

There’s a knock on the door and in walk three demons. One of them snatches the map while the other two attack. One of them posses the woman’s body, but Castiel suddenly pops in to help. 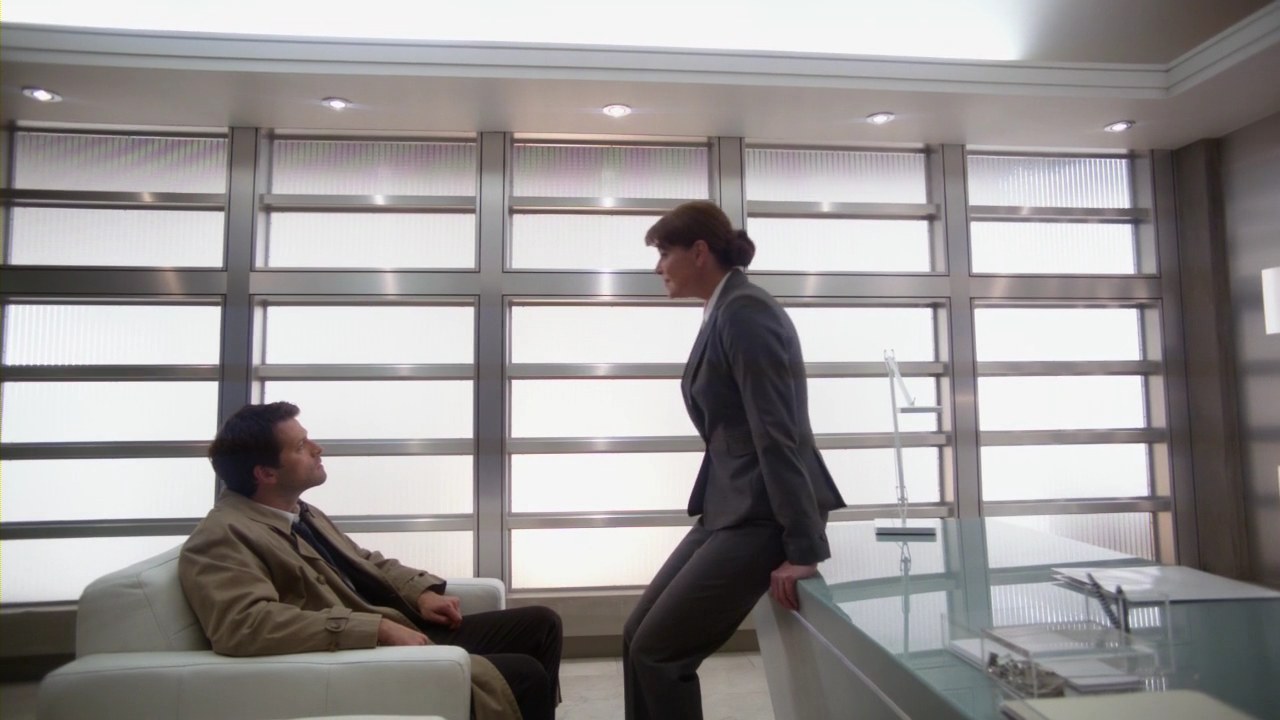 Sam and Dean want to know where he’s been. Following Naomi and his discussions about how to have all this play out, Castiel explains he’s been hunting demons Crowley has set out to find Lucifer’s crypts in order to find a parchment that could decode Crowley’s half of the demon tablet. (A lie.)

They are definitely suspicious of him, but they join him in the kitchen to interrogate the demon who says they have a hostage that’s told them where the crypts are.

But before the demon can tell Sam and Dean what they’re really looking for, Naomi tells Castiel to kill it.

What the hell was that?! Castiel says they have what they need and he flies on ahead to the motel where the hostage is. The Bros hurry over and they find him already finishing off the guards. 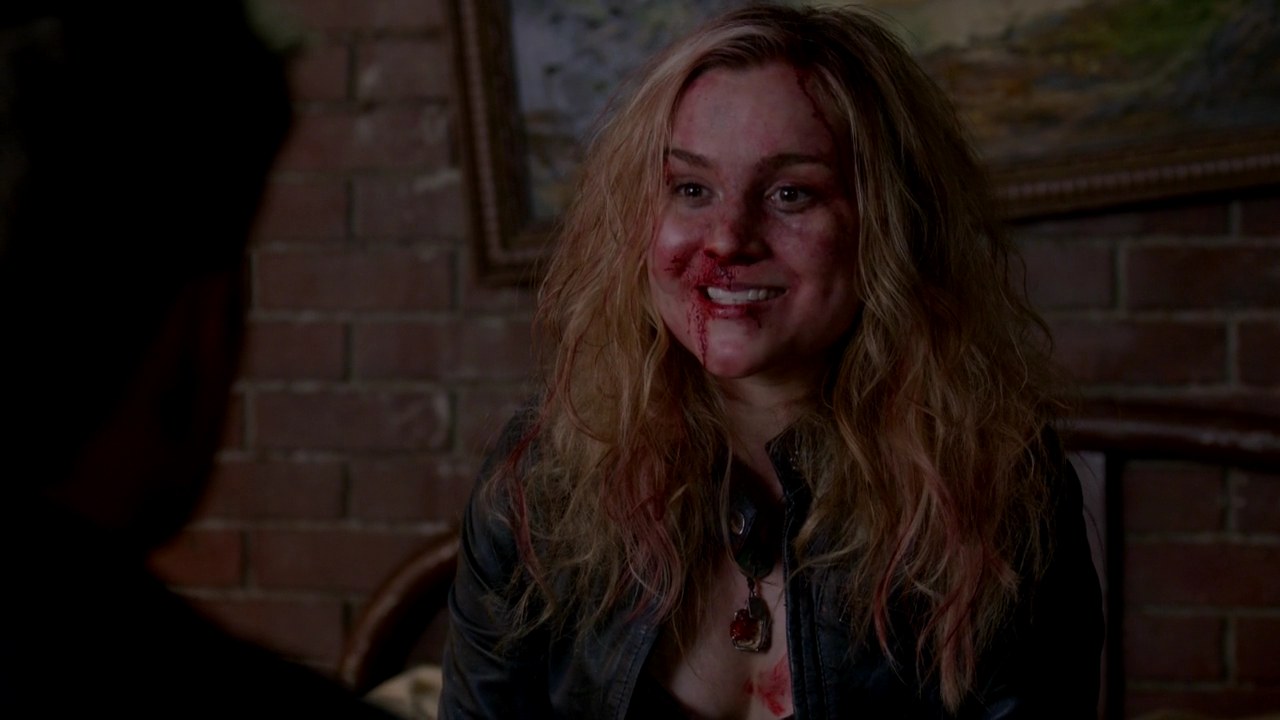 They find the hostage… and it’s Meg.
She explains that she’s been leading Crowley on wild goose chases to stop her torture until she can at least find a way to escape his clutches. Castiel and Naomi powwow about what to do now and he persuades her that they must work with Meg to find the crypts, even if it is “unclean.”

Meg tells the Bros the real reason for all this hunting… the angel tablet. It’s likely hidden in one of the crypts. Castiel pretends this is news to him and asks Meg to help them.

They bring Meg to the relief map in the basement of the one of the victims and she points out where the crypt was. 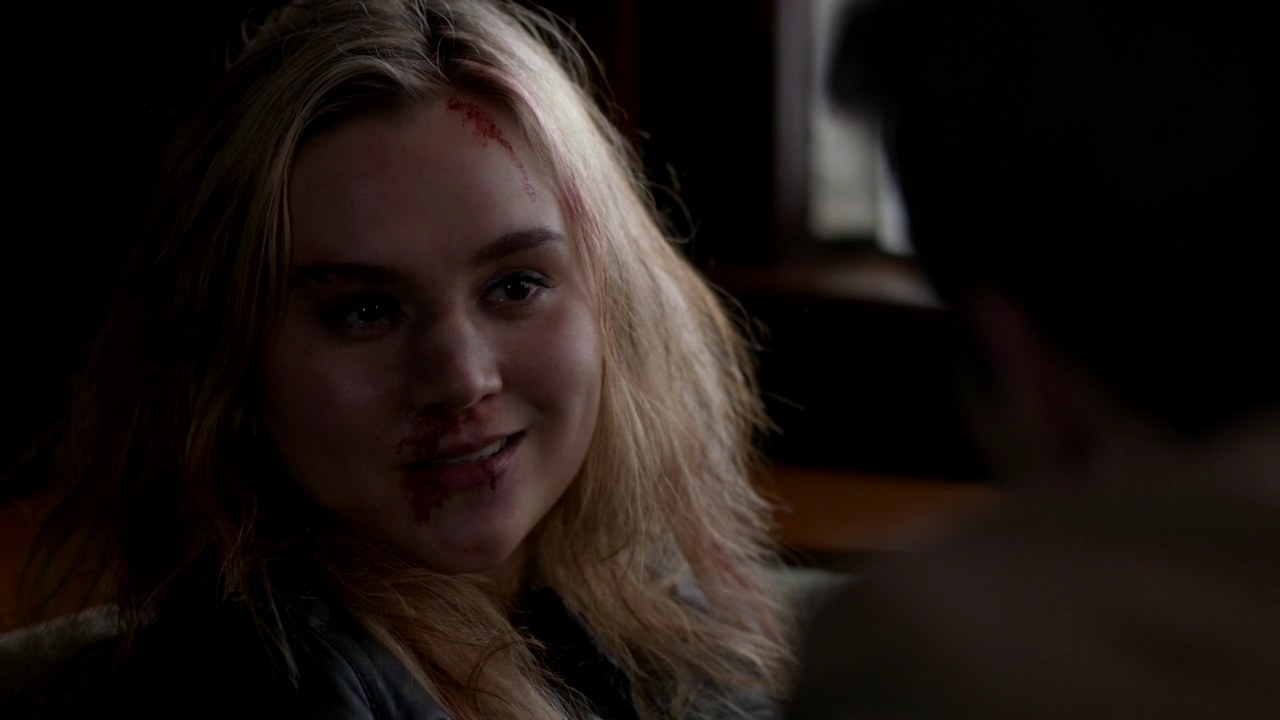 Meg and Castiel head upstairs while Sam and Dean wrap their heads around Castiel lying to them and about the existence of an angel tablet.

Castiel cleans up Meg’s wounds and they flirt. She asks if his noodle’s all better and he says yeah, he remembers everything. She smiles, asking “everything??”

He confirms, yes, he remembers everything, including “the pizza man.” And it is a very good memory.

Sam and Dean find the location of the crypt and decide they have no choice but to trust Megstiel.

Megstiel continue their sexual tension. She says she misses the apocalypse, back when she was bad and he was good. Things were so simple. Now, she’s kinda good (which sucks) and he’s kinda bad (which is very hot). She proposes that if they survive all this, maybe they can do the pizza man and “move some furniture.” Castiel takes a second, but he understands and they both smile as the Bros come upstairs.

They foursome get to the abandoned warehouse that stands above the crypt. Dean says Sam will stay outside with Meg while he and Castiel go in. Sam protests, but Dean says he saw his “bloody rag.” Sam says he’s fine, but Dean says Sam’s not been fine since the first trial. Meg’s ears perk up.

Dean and Castiel head inside. Sam and Meg are sealing the place off. She can’t believe after she took bullets for them that they didn’t even look for her. Now, Sam won’t even open up about trials and being damaged?

She can’t believe after everything, they would still doubt her being “Team Sam.” She reminds him that she’s spent time inside him and knows he wants to live a long, normal life away from creepy crawlies like her. He tells her about realizing that was possible after spending a year with…

“Wait, that’s how you spent your last year? With a chick?! Lame.”

But she wants to know more. 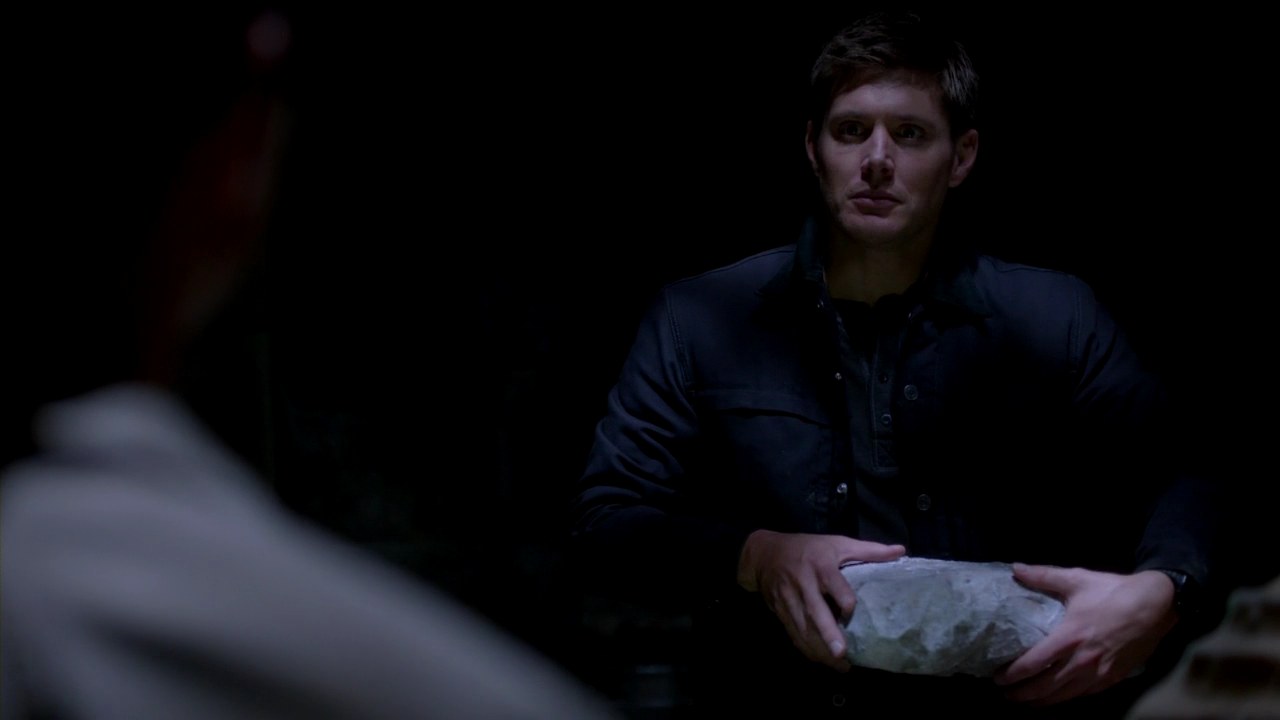 Dean and Castiel find the crypt and he immediately reports to Naomi who tells him to handle the situation. The box is warded against angels, so he needs Dean to open it.

The tablet is indeed inside. Castiel asks Dean to hand it to him to take it to heaven. No, Dean says, they’ll take it to Kevin to translate.

Castiel tells Dean he can’t and won’t let Dean take the tablet.
Dean asks how he got out of purgatory as Naomi pushes him to kill Dean.

Sam’s finished telling Meg his story. She asks why the hell would he stop after hitting a dog? But really, she gets it, what Sam realized in that year. Crazy to think someone exists that could get Sam to leave hunting behind. A unicorn!

Castiel doesn’t want to hurt Dean. Naomi pushes him. Who’s Naomi?
I fixed you, Naomi says. After all the blood on his hands from his rampage, she fixed him.

Sam and Meg fight the demons that have arrived as Crowley joins the fun.
Castiel fights Dean, the tablet is released from the stone. Naomi demands he bring her the tablet. 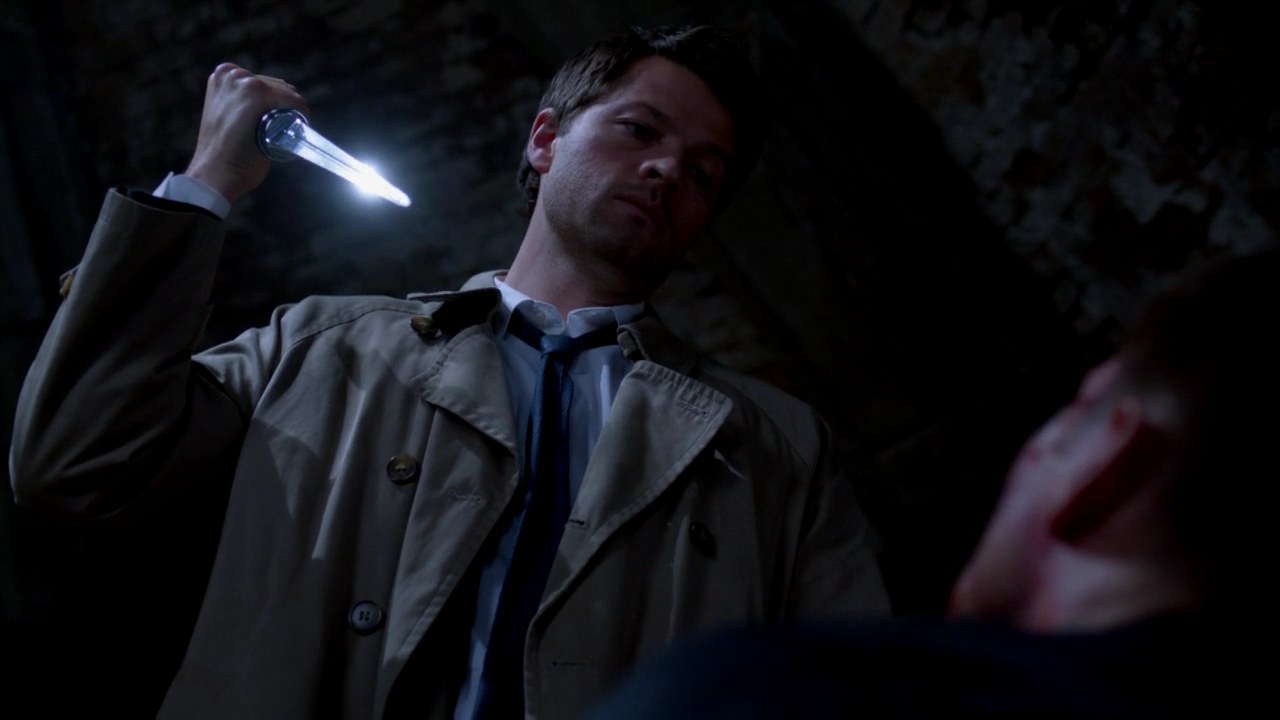 Dean pleads with Castiel. They’re family. “I need you.”
Naomi tells Castiel he must choose between “us or them.”

“Castiel! So that’s who’s been poking my boys and not in the sexy way.”

Meg tells Sam to go save his brother… and her unicorn. Sam heads inside.

Crowley tells Meg about the Bros’ plan to seal the gates of hell and to kill all demons. She smiles, if it means Crowley’s dead too, they hey. 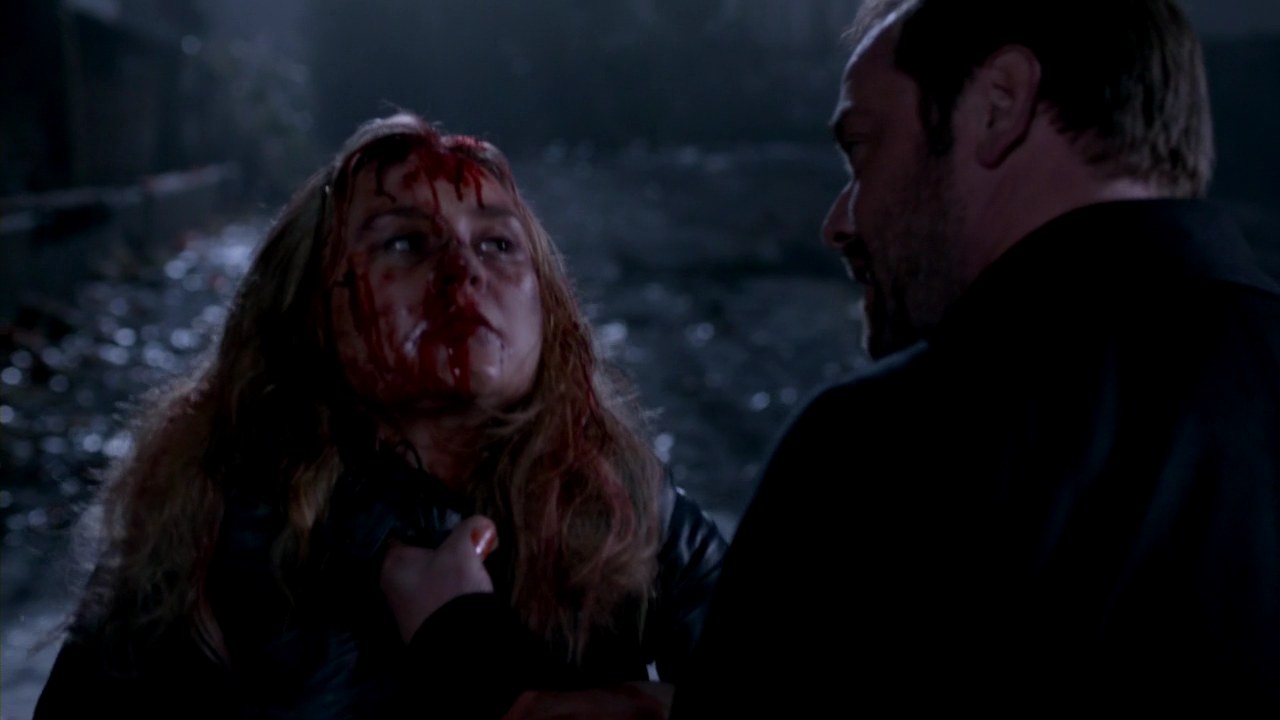 Castiel tells Dean about Naomi, but now he’s got to keep the tablet safe. From Naomi… and from the Bros. He flies away as Sam arrives.

Crowley’s chewing on Meg. They see Sam and Dean hop into the Impala. The distraction allows Meg to stab Crowley’s arm, but Crowley then stabs Meg right in the ribs.

Crowley and Naomi meet in the crypt. They seem to have a history in Mesopotamia and he wants to offer a deal, but she flies off.

Winchester Bros Emo Moment of the Week
I can’t take anymore lies, Dean says, from anyone.
Sam apologizes for lying about the mouth blood and promises to be more open from now on.

Dean says he may not be able to carry the burden of the trails, but he can carry Sam.

Castiel’s in a bus with the tablet in a knapsack.

Episode Thoughts
Well, a very amusing episode. Just like the only thing Meg got out of Sam’s story about his lame chick was the dog, maybe the biggest thing I got out of this episode was Castiel being Meg’s unicorn.

Damn. How romantic. Is it wrong that I think… no, no. It is definitely not wrong that I think this whole Castiel and Meg happily ever after fantasy is much more rootable and interesting and romantic than Sam and whatsherface. Honestly. Meg pretty much described that whole story well, “Lame.”

Maybe it’s because it wasn’t shoved down our throats for half the season, but the idea of Meg and Castiel having bonded through all the crap they’ve been through together and separately with the Bros and their rebellious streak against their respective bosses, it’s very touching. “The feels!” as they say. (I can’t believe I used it, eek.)

So Castiel having to go on the run, Meg left for dead (though we know not), that was more heartbreaking than Sam losing his normal life with the married woman.

Strangely enough, the angel tablet stuff was alright. Any Kevin-less tablet scenes are already less interesting than the scenes with Kevin. The parallel Earth-Naomi’s office scene cuts were interesting on their own, but not so much in the overall scheme of things. We haven’t really gotten a sense of where that part of the story is going. We know where Crowley and the demon tablet story is going, but not the heaven stuff.

Anyway, it was a good episode overall and great if only for seeing the Sam, Dean, Castiel and Meg together as the Four Muskateeers

Miss the episode or want to watch it again?
Download full episodes of Supernatural on

Also get Season 7 on Blu-ray and DVD at