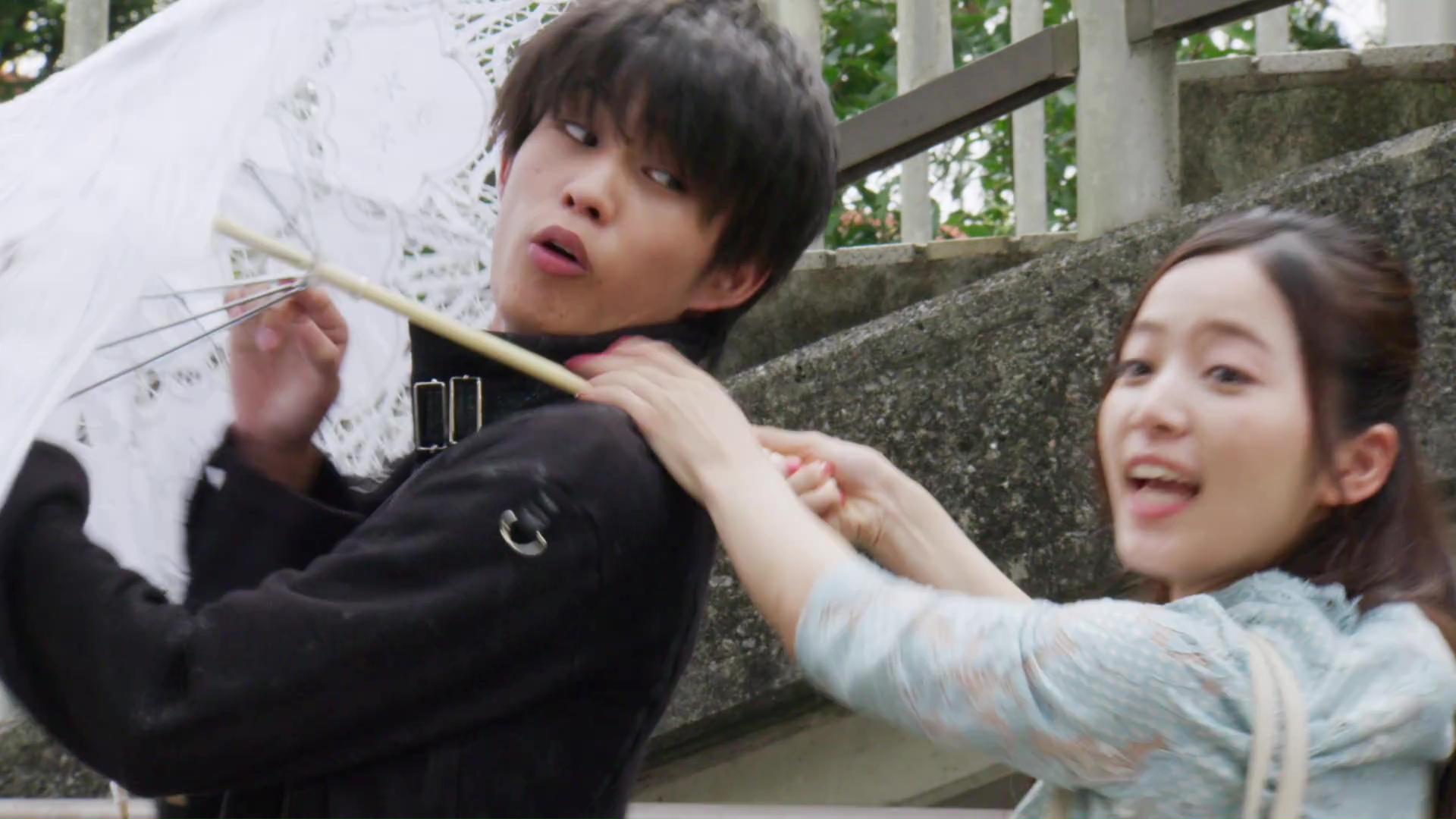 Tsubasa has just enjoyed a nice lunch when the detectives find him and give chase. He is of course able to escape their clutches, but he is not so lucky with Ijuin Mizuho. She recognizes him as the wanted fugitive and asks to become his student in the art of thievery. Tsubasa has no idea what she’s talking about, but she threatens to turn him over to the cops if he does not agree.

Mizuho explains that she would like to become a kaitou. She has even already made a calling card to leave at the scene. Tsubasa tells her that kind of stuff only happens in the movies, plus she shouldn’t really be signing her real name on it.

Tsubasa says he is not a kaitou, but innocent. After another threat of outing him, Tsubasa gives in and listens to her story.

Mizuho would like to steal a painting entitled Secret by the late art prodigy Aota Takeo. Tsubasa asks why she would want to do that. But the question triggers the Hitotsuki inside of her, desiring the painting very much.

Tsubasa henshins, but is shocked to see Mizuho seemingly stopping herself from attacking people. He chases after her when she runs away.

Mizuho explains that Secret is a portrait of her by Takeo, seemingly her boyfriend and his final piece as well. She says he had always intended to leave it to her, but it was stolen from his studio.

She resists the urge to transform into a Hitotsuki again and suddenly gets an alert that Secret is being put up for auction. She is happy that they won’t have to steal it anymore and asks Tsubasa to accompany her. She has a lot of moneys, so it should be okay.

Over at Donbura, Master Kaito is also very much interested in Secret and asks Shinichi and Haruka to go to the auction to get it for him. He thinks it’ll look great in the café.

Tsubasa is with Mizuho at the auction as they wait for Secret to come up. Shinichi and Haruka are here, but so is Tsuyoshi who is here with his boss as their president has tasked them to also win Secret.

Mizuho gives the nod to Tsubasa to bid on 5 million, but he is a bit embarrassed with his clumsiness. Shinichi and Tsuyoshi are surprised to see him here.

As the bids go higher and higher, Mizuho remembers her time with Takeo. She had never modeled for anyone before. But he approached her and she accepted since she enjoys trying new things. She admits she grows tired of things quickly and wonders if this will be the only time she will pose as a model for someone.

She returns for a second time, however, much to Takeo’s surprise. He thinks she’s an interesting one. But Mizuho says posing like this feels like she is bound. Takeo says she is. Observation is a form of bondage for the subject, he says.

Takeo suggests they take a break and asks his apprentice Sano to get them some tea.

In the present day, Mizuho bids 8 million. With the go-ahead from Master Kaito, Haruka confidently stands up and bids 9 million… kibidango. The room is floored, literally.

Mizuho’s memories continue to play in her head. She has returned for a third painting. Takeo says painting her like this makes him feel like he understands her. Mizuho feels the same way about him. “You love me,” she says.

Assistant Sano is surprised by Mizuho’s forwardness. Takeo says he is the medium through which his own vision of her appears on the canvas. She asks if he prefers the real-life Mizuho or the one in his paintings.

Takeo understands that Mizuho must love him as well. She says she actually hates him since he isn’t faithful. Takeo says he hates her as well as she is just too much.

In the present, Tsuyoshi goes overboard with bidding, not wanting to lose. But Mizuho raises her paddle and makes the winning bid of 50 million. 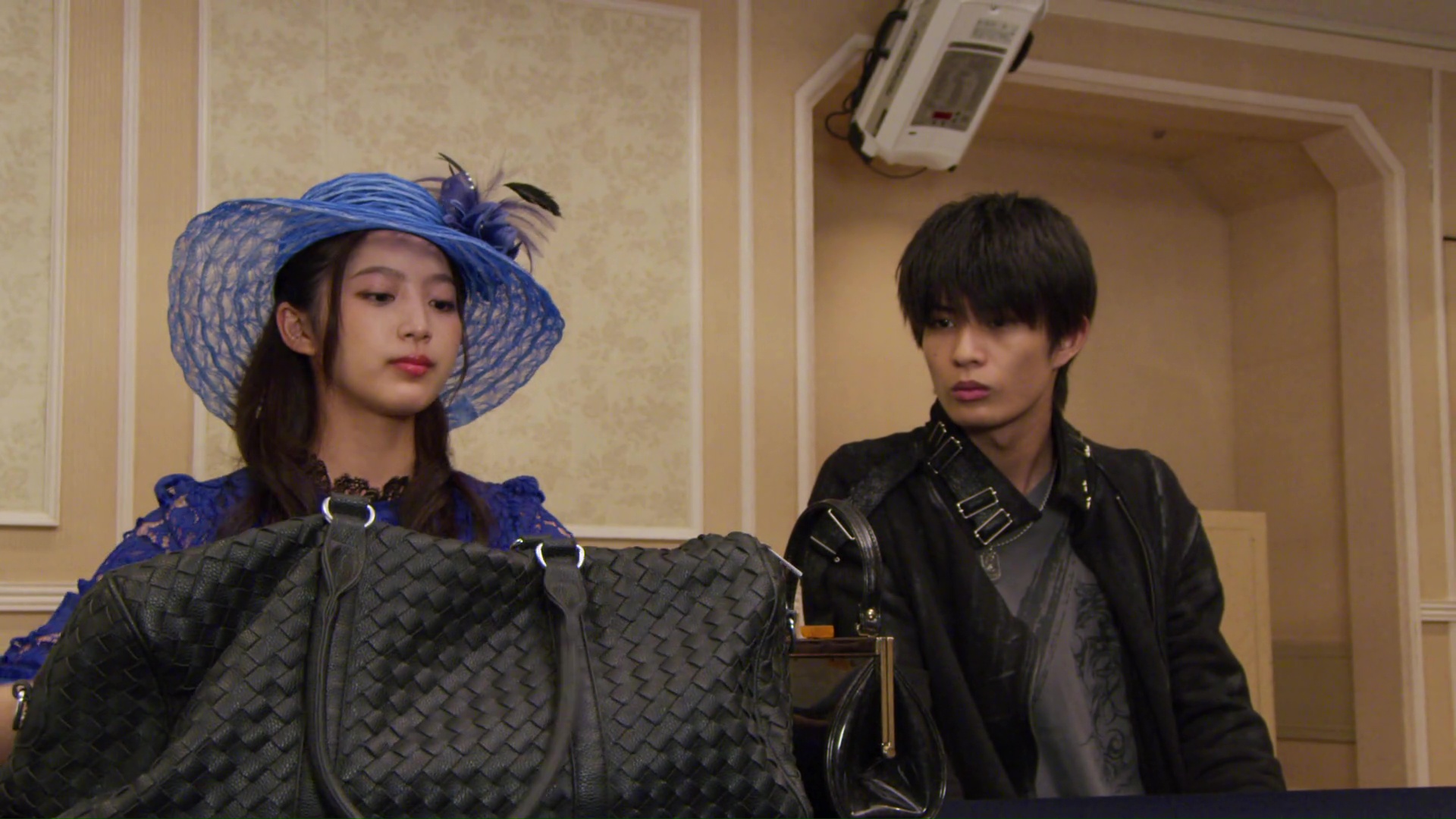 Tsubasa accompanies Mizuho into the next room where they are to pay for and claim the painting. Haruka and Shinichi are also in the room with Haruka maintaining communication with Master Kaito.

Mizuho is surprised when the painting’s current owner walks in. It is Apprentice Sano. She pulls out her duffle bag full of money and gives it to Sano. Haruka is ready to make an offer of 100 million kibidango. But Sano is livid when he sees that the “money” in the bag is just blank pieces of paper.

Mizuho turns into the Hitotsuki, takes the painting, grabs Tsubasa and escapes through a virtual door. Haruka and Shinichi henshin, but they lose the thieves. 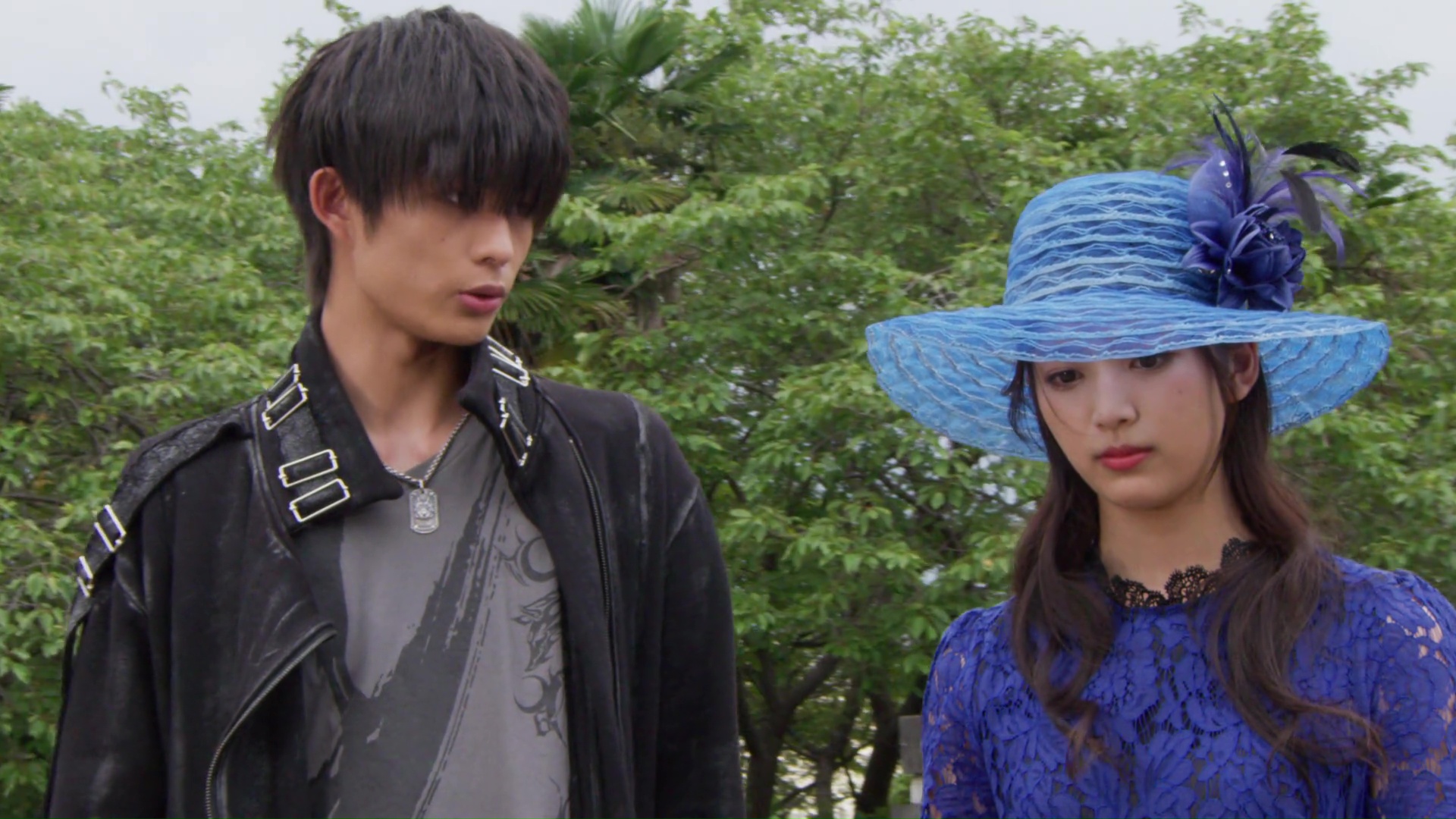 In a scrapyard, Mizuho goes over the painting and concludes that it is actually a fake. But she at least knows it was Apprentice Sano who stole the painting. And she now knows exactly what they need to.

Meanwhile, Sano has hired Haruka and Shinichi as bodyguards for the painting since he received a warning letter from Mizuho about taking it. Sano tries to pass off him presenting a fake at the auction as a simple mix-up. But he quickly changes the subject and admires Haruka’s face. He feels inspired by her and thinks she is a perfect model. Haruka, of course, accepts. But her pose involves her having to blow up a balloon. 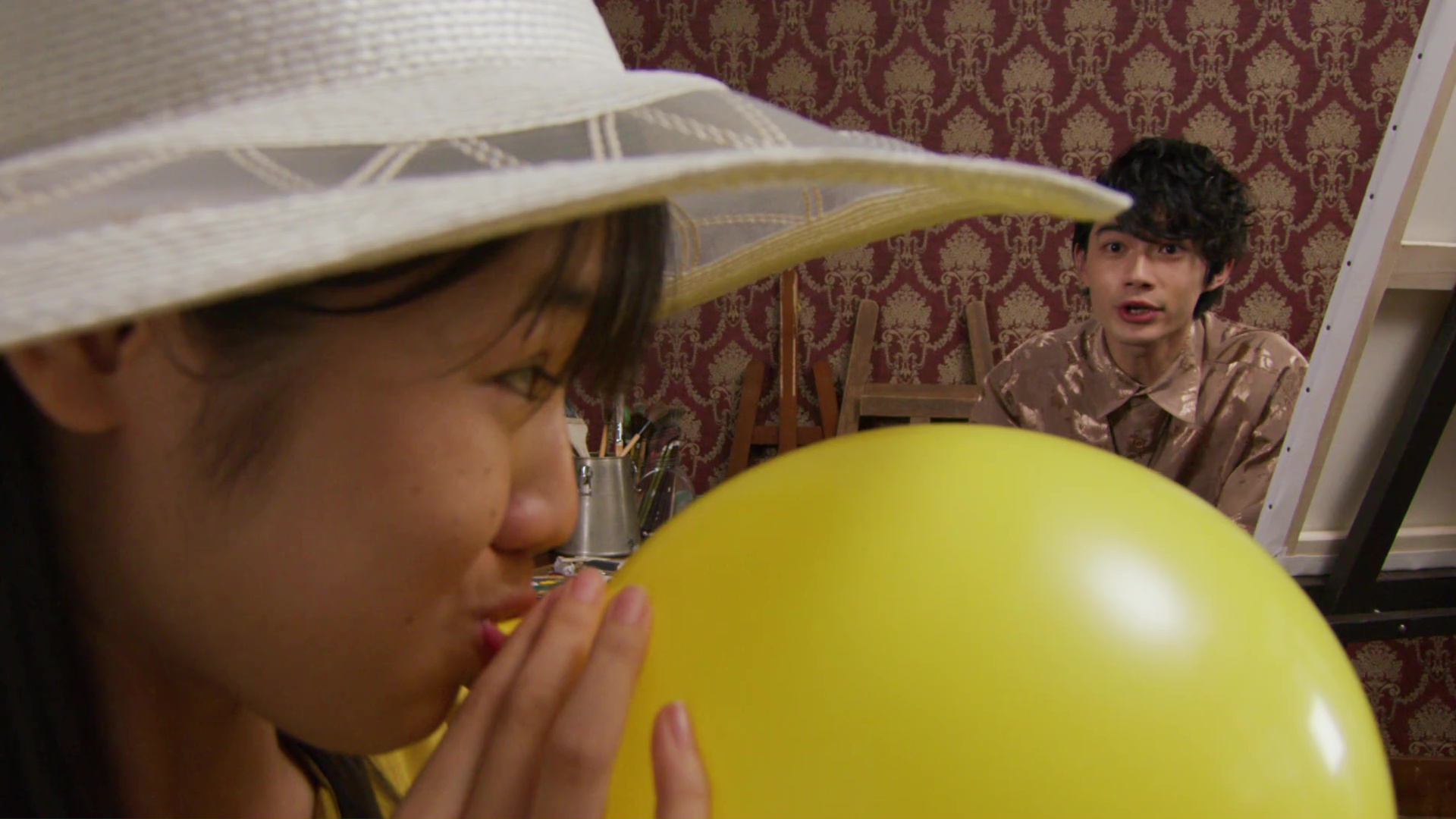 While Sano is painting Haruka in the other room, Shinichi seems to fall asleep while guarding the painting. That gives Mizuho the chance to sneak in and take the painting. But Shinichi was ready all along. Too bad for him as Tsubasa was also ready. He is able to kick Shinichi out of the way and allow Mizuho to run out with him.

Shinichi interrupts the painting session and drags Haruka out to give chase. They catch up to Mizuho and Tsubasa. But Tsubasa fights back, even as Tarou and Tsuyoshi arrive. The other Donbros question Inu Brother actually teaming up with a Hitotsuki. But Tsubasa says the Hitotsuki will turn back to normal as long as they give her some time.

The Donbros don’t buy it and they face-off. They all play hot potato with the painting. Tsubasa gets a hold of the painting, but Mizuho lets out a huge explosion at them all.

Jirou arrives and is about to henshin, but abunaiJirou takes over instead. He henshins, but Tarou won’t let him hog the spotlight. The two of them deliver finishers at the Hitotsuki, but it immediately embiggens into a Hitotsuking.

Tarou confronts Tsubasa about what’s happened. Tsubasa says a lot has happened, but if it has come to this, he has no choice but to join the others in fighting Mizuho.

The Donbros combine into Don Onitaijin with the Jirous forming Toradragonjin. But Tarou says even if they’re rivals, they should dai gattai together for the greater good.

The Donbros all combine for the first time into Toradora Onitaijin. Their powerful combi is able to defeat the Hitotsuking for good using a mix of new attacks.

Tsubasa accompanies Mizuho back to the scrapyard. She tosses the painting into the fire and stops Tsubasa from trying to pull it out. Mizuho says this is what Takeo wanted.

Mizuho remembers Takeo’s wish. He concluded that the painting was a failure and asks her to burn it if he were to ever die. Seeing Takeo including himself in the painting with a smile, Tsubasa does not agree that it was a failure. He believes Takeo knew how much he loved her and realized he couldn’t express it all. The greatness of that love is likely Takeo’s Secret.

Mizuho says that is absurd. She knew exactly how Takeo felt, it wasn’t a secret to her at all.

Meanwhile, Haruka arrives at Donbura with a painting. Master Kaito is excited, thinking it is Secret. But actually, it is Sano’s painting of Haruka. 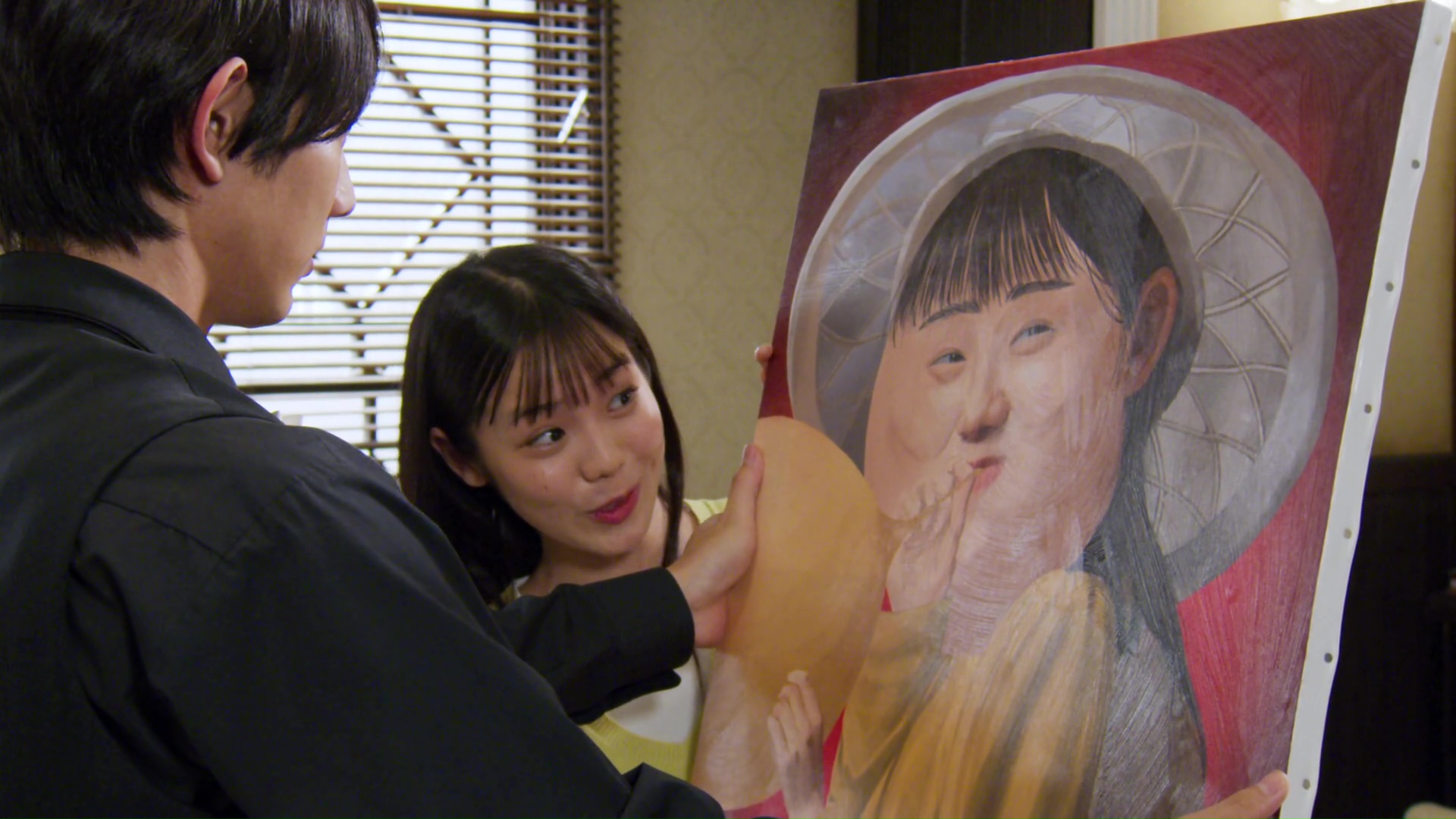 Haruka proudly says she was the model and asks where they will be hanging it in the café. Kaito, however, does not want it.

Wonderful episode! I enjoyed it very much. This was one of those Donbrothers episodes where the Hitotsuki of the Week has a pretty emotional story, but there’s still plenty of well-placed comedy and humor. That balance is very much Donbrothers‘ strength and makes a more complete, enjoyable package than other seasons.

First off, the recap at the beginning of the episode was funny since it showed the tragic end to the Tarou-Sonoi love story with the jolly music playing in the background. Lol Though I guess it’s not really an end since it continues next week when Tarou and Sonoi play out their own Sleeping Beauty/Romeo & Juliet/Snow White story. Something to look forward to!

But this week’s episode was great. It’s always nice to have Tsubasa actually show up in person. Again, they better be preparing a HUGE episode when he and the other Donbros finally figure out each other’s identities. Because the longer they drag that out, the higher the expectations!

Having Tsubasa be the focus of this love-themed episode certainly fits in with his story. That and him actually involved in some potential thievery of course.

The Hitotsuki of the Week story reminded me of the Haruka-focus episode with the ghost. Similarly tragic love stories injected with lots of fun moments. The show manages to make it work and it’s always a treat when it does. They hit all the right notes. It is emotional and dramatic when it needs to be. And it’s fun and hilarious when it needs to be.

I laughed out loud so many times this episode. Haruka confidently bidding with kibidango was hilarious and then coupled with the room just losing it. That’s the kind of fun, slapstick humor you can’t help but smile with. Then at the end with the unveiling of her painting; if I was drinking at that moment, I would’ve absolutely spat my drink out.

Trying to remember my high school History of Christian Art and college Appreciation of Visual Art classes, but was it Botero who had those portraits with the big round faces? That’s exactly how the painting of Haruka looked like. And I think it was so funny just because I didn’t expect that at all. I mean, I knew it would be Sano’s painting of her. But I didn’t expect it to look like that! lol It’s a good painting of course, but it’s the unexpectedness of it. lol

Finally, Toradora Onitaijin is crazy! lol I couldn’t even follow where every piece was going or coming from. But it still looks cool when fully formed. And the CGI was blended well with the physical suit of the Hitotsuking. Seamless transitions for a fun mecha battle. One that included a double buttslam! Lol

Non-CGI Donbro of the Week 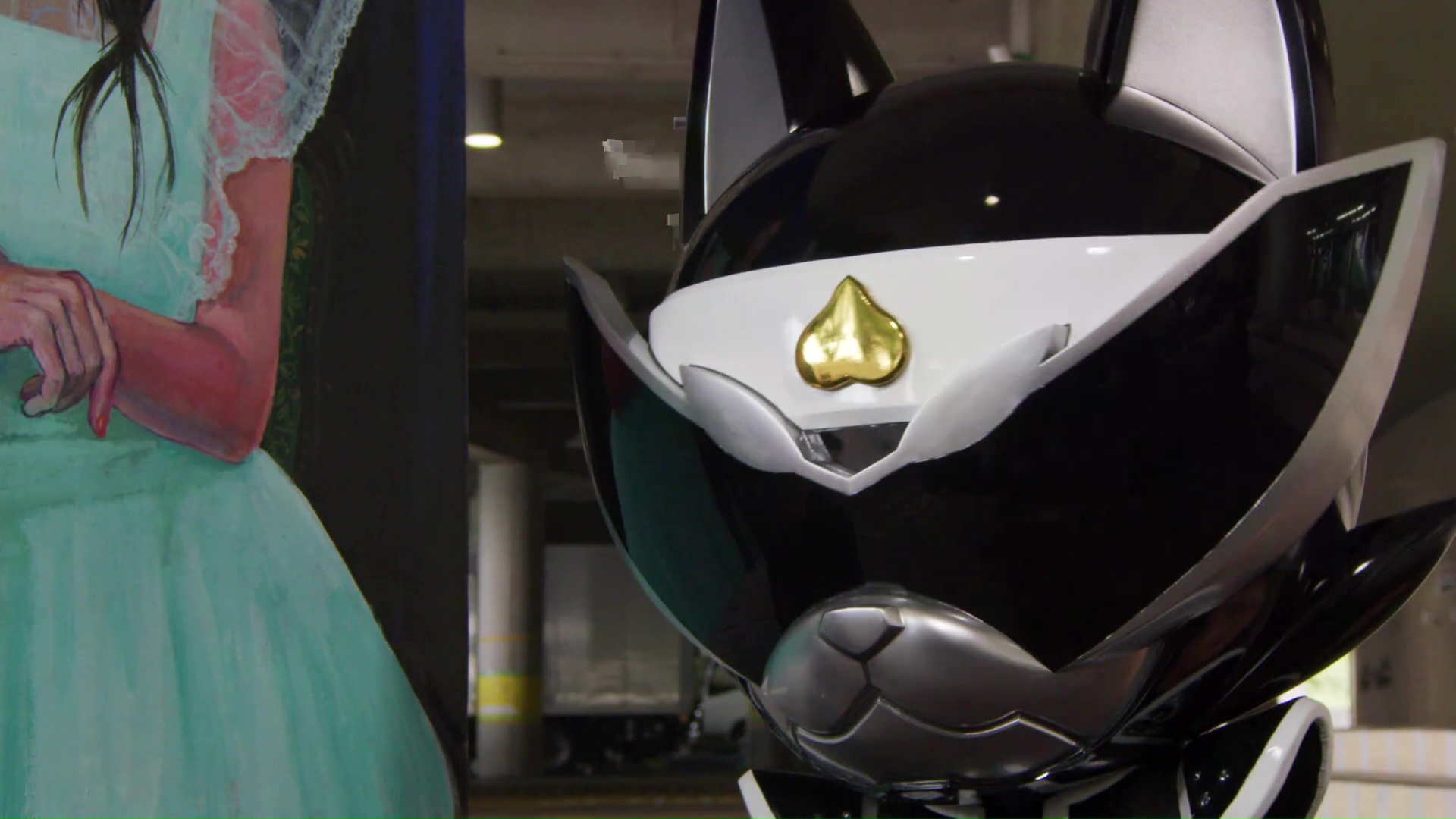