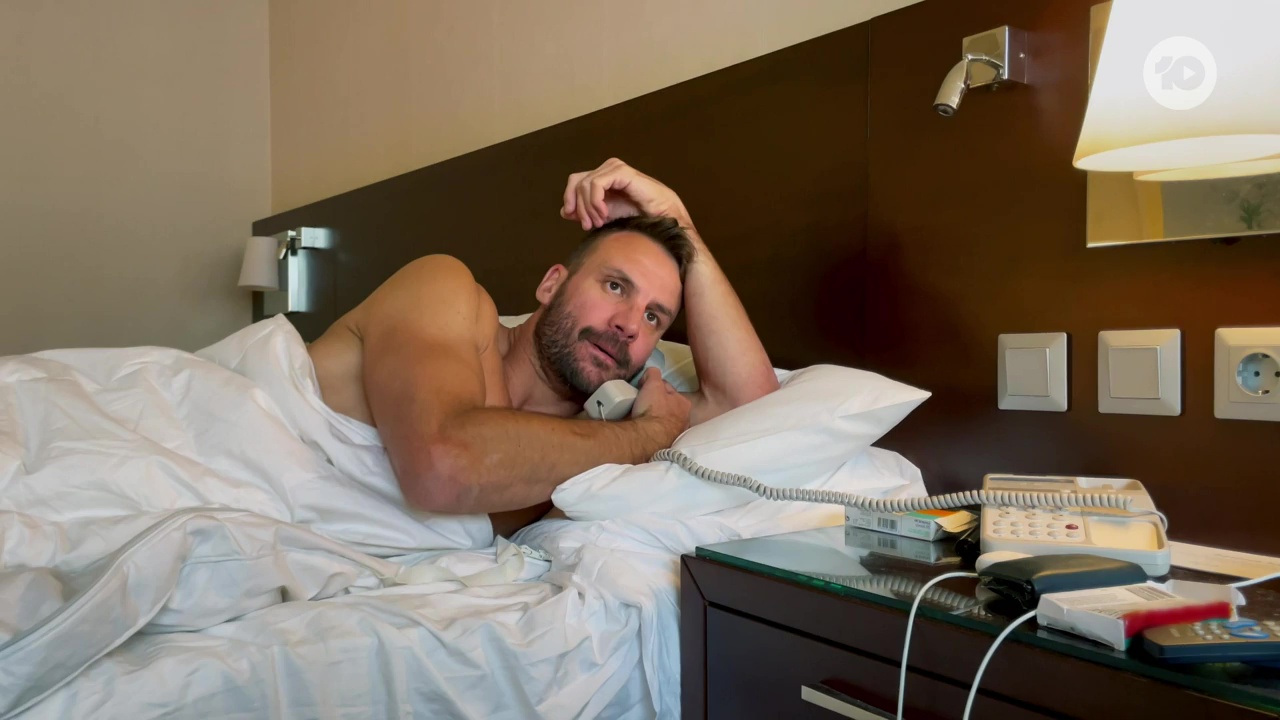 The 7th Leg of the Race begins with teams opening the first clue telling them to fly to Izmir, Turkey/Turkiye. But not everyone will be traveling today. Kathy & Chace are still COVID positive. And now Stuart & Glennon AND Beau himself have also come down with COVID and must quarantine.

Upon arrival in Izmir, the 13 teams that actually are Racing will first make their way to L’Agora Old Town Hotel where they must learn and perform a traditional Turkish belly dance. 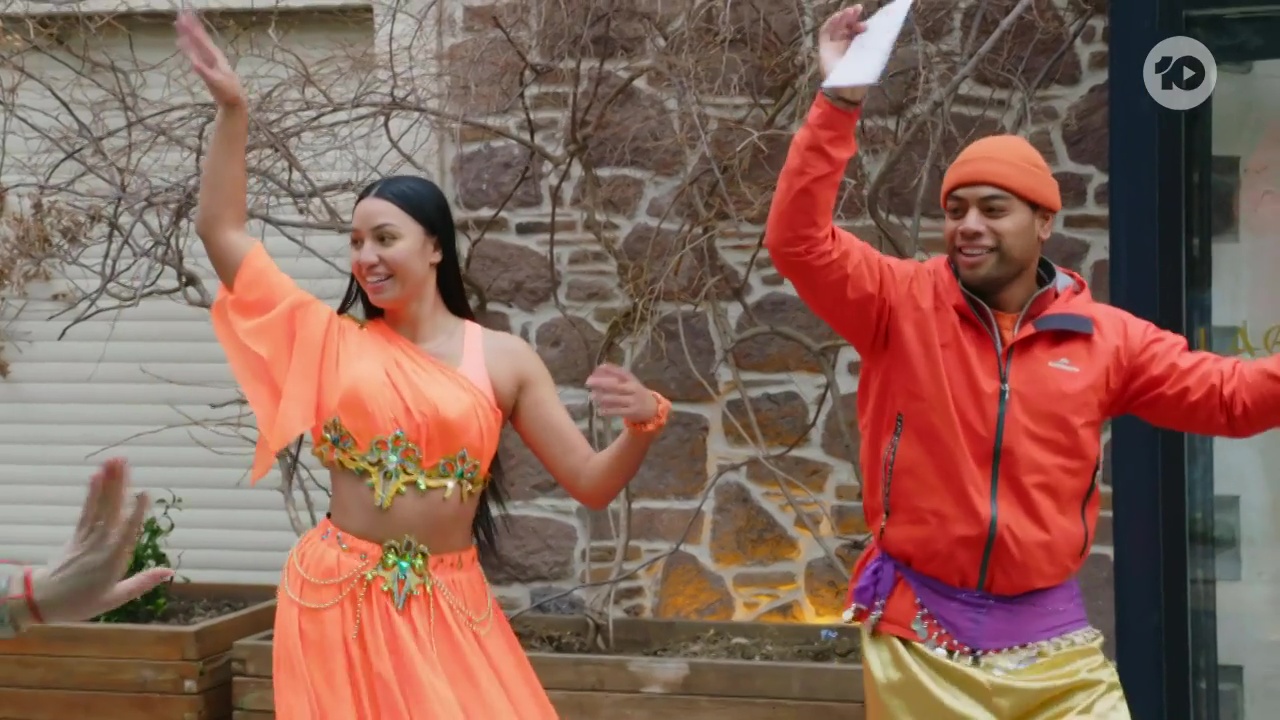 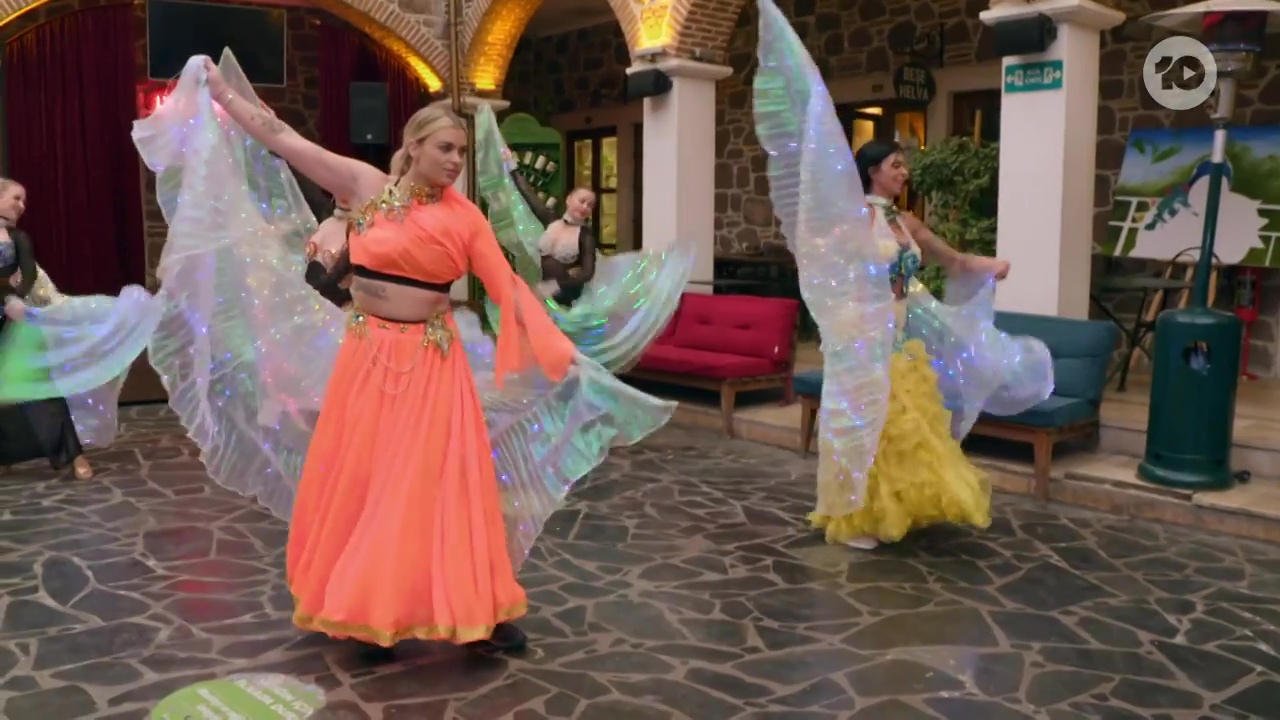 Flick & Gabby decide to immediately give it a try since they’ve got nothing to lose. They seem to have gotten the routine down, except for the very last drop of their wings.

After the belly dancing, teams will now hop on for a magic carpet ride. This magic carpet is actually a remote-controlled electric skateboard and teams must navigate a course that includes keeping to the right or left of colored cones, weaving through cones and then stopping within a designated zone. If teams fall over or knock a cone over, they’ll have to start again. 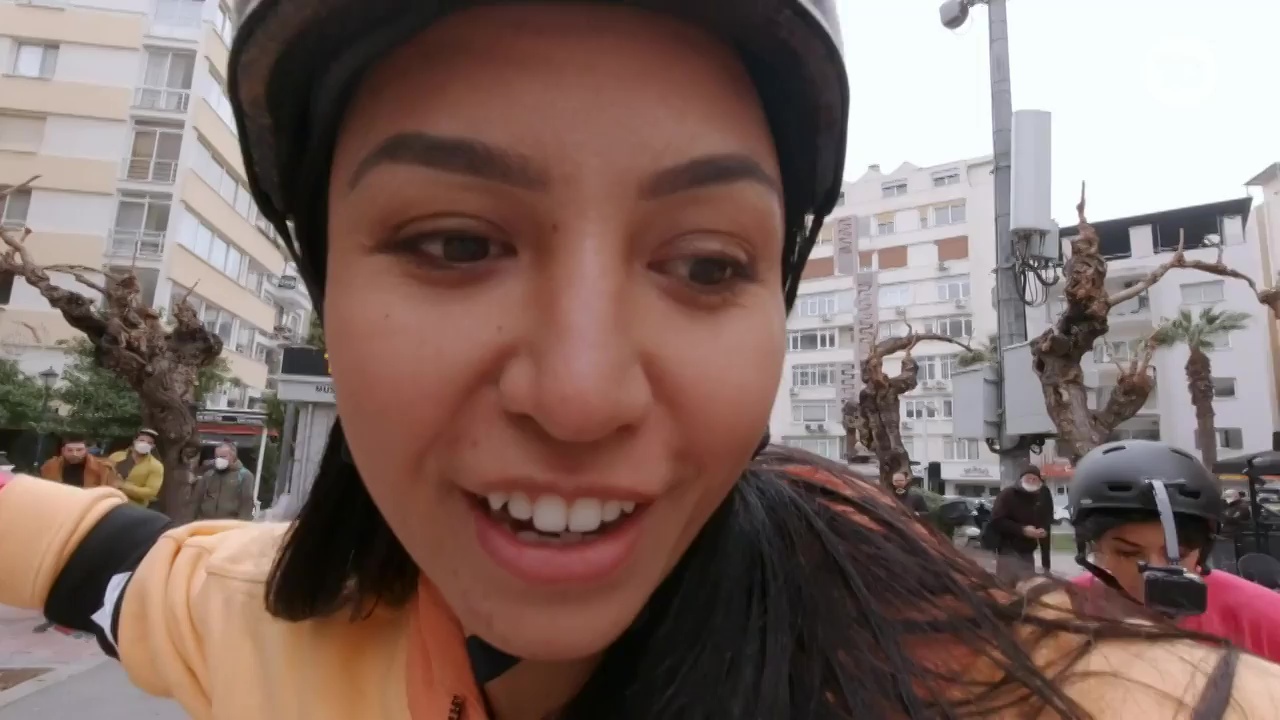 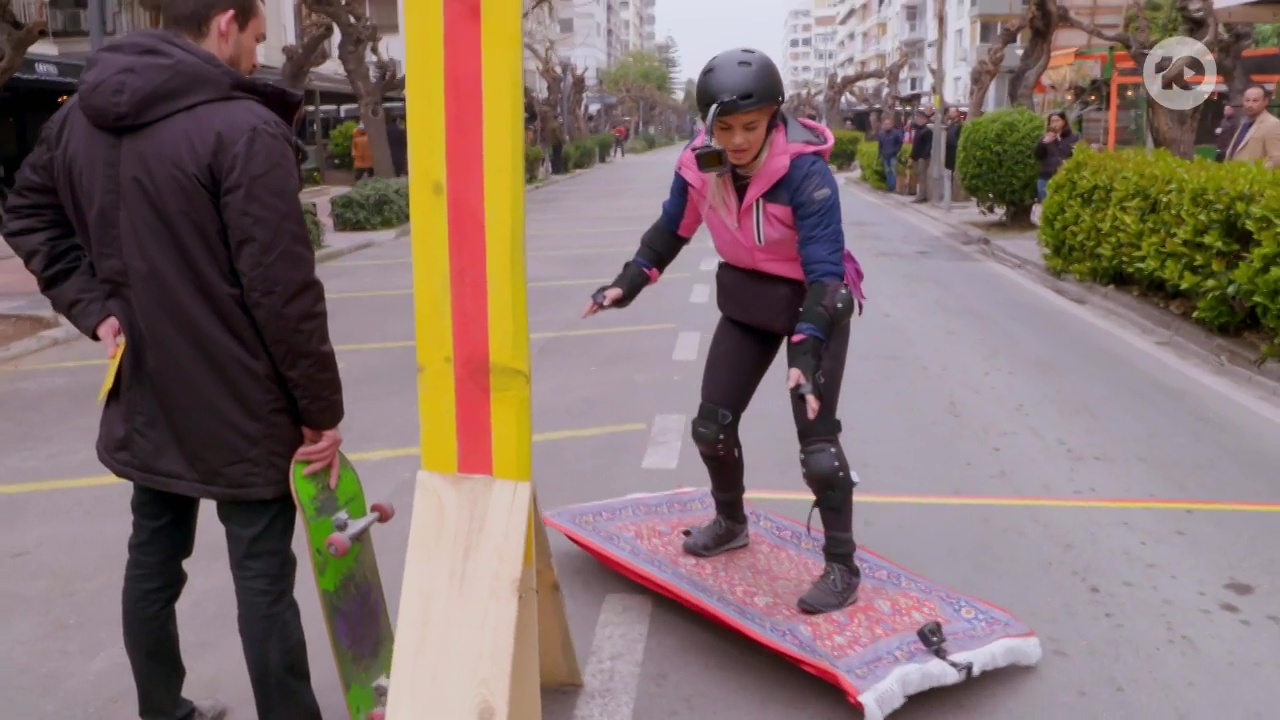 On the way to the magic carpet street, Angel & Frankie’s cab gets hit by another car. Angel tries to tell the cab driver to just drive off, but of course he’s not going to do that. Later, Angel says the car had T-boned them into Frankie’s side of the car and that they were almost “killed” by that driver.

Anyway, it’s another quick blur of teams finishing the belly dancing task and teams catch up at the magic electric carpet.

Pako & Mori maintain their lead and open the next clue revealing the Road Block: Who’s feeling sheepish? For this Road Block, teams must prepare kokorec by tightly wrapping intestines and stomach lining onto a skewer. After getting their spit approved, they will exchange their raw kokorec for a cooked version to eat and receive the next clue. 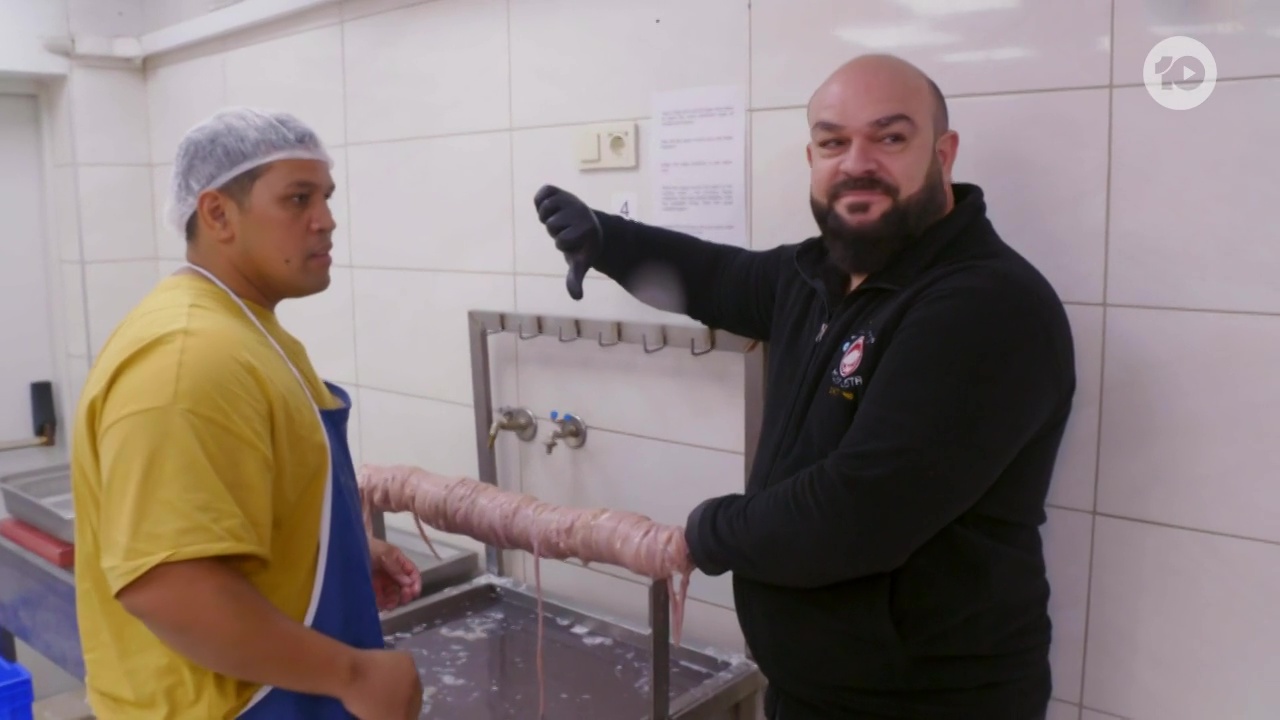 Angel & Frankie, Morgan & Lilli, Chelsea & Jamus are next to finish. Flick & Gabby decide to switch positions. They think they’ve finally got it, but they get the thumbs down and grow frustrated. Finally, they pass with Fliss & Tottie and Tammy & Vincent close behind. Another blur of teams finish, leaving Crystal & Reem in last place at the electric carpet.

On the way to the Road Block, Georgia is crying because she has decided to do the task, but she is a vegetarian. Kelly suggests they just take a penalty for the eating part. 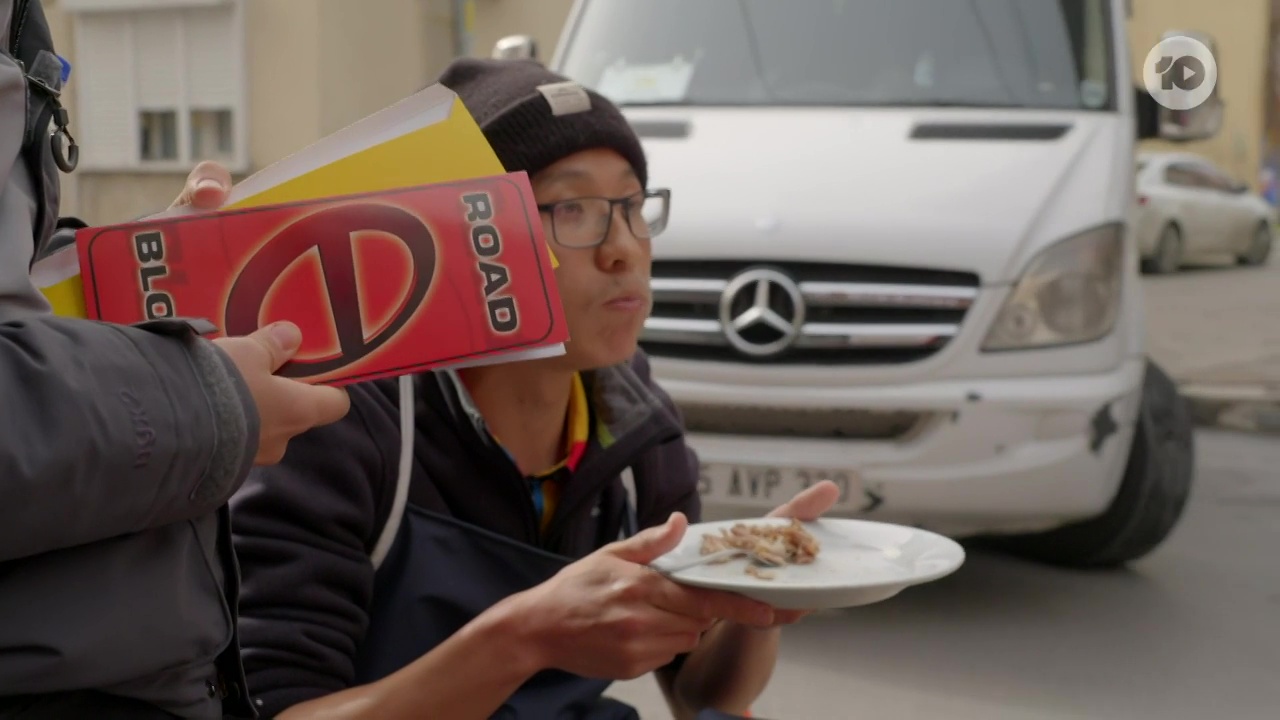 At the kitchen, teams have caught up, but must wait their turn since all the stations are full. Angel is the first to get her skewer approved. She and Frankie head to the restaurant and she scarfs down the plate of cooked kokorec.

Angel & Frankie officially move into the lead and can now head to the neighborhood of Kemeralti where they will use traditional poles to carry 100 gevrek each to deliver to a street vendor on the other side of the market.

Back at the Road Block, Chelsea is frustrated as a few teams have already left while Jamus is not doing the task correctly. They call each other “ding-dong.” More teams arrive and leave. Georgia gets into the kitchen and is absolutely disgusted by the whole experience. But even though she and Kelly fall to last place, she is able to get through both the wrapping and eating.

At the gevrek, Angel & Frankie have no problem delivering their 200 pieces and they get the next clue directing them to Izmir Cumhuriyet Meydani for the Pit Stop. As they are leaving the market, some nice Air Force 1s catch their eye and they go in to try some on, hoping to secure a pair. But they realize they’re in a Race, so they have to pass this time. 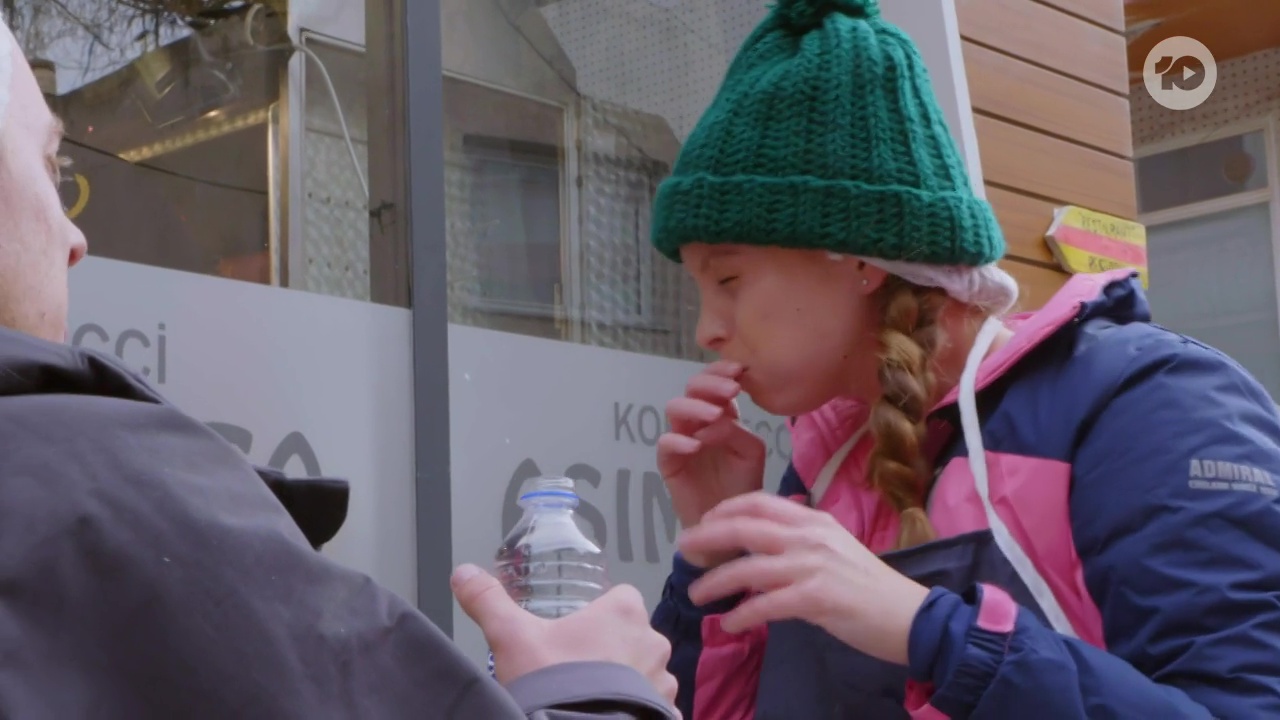 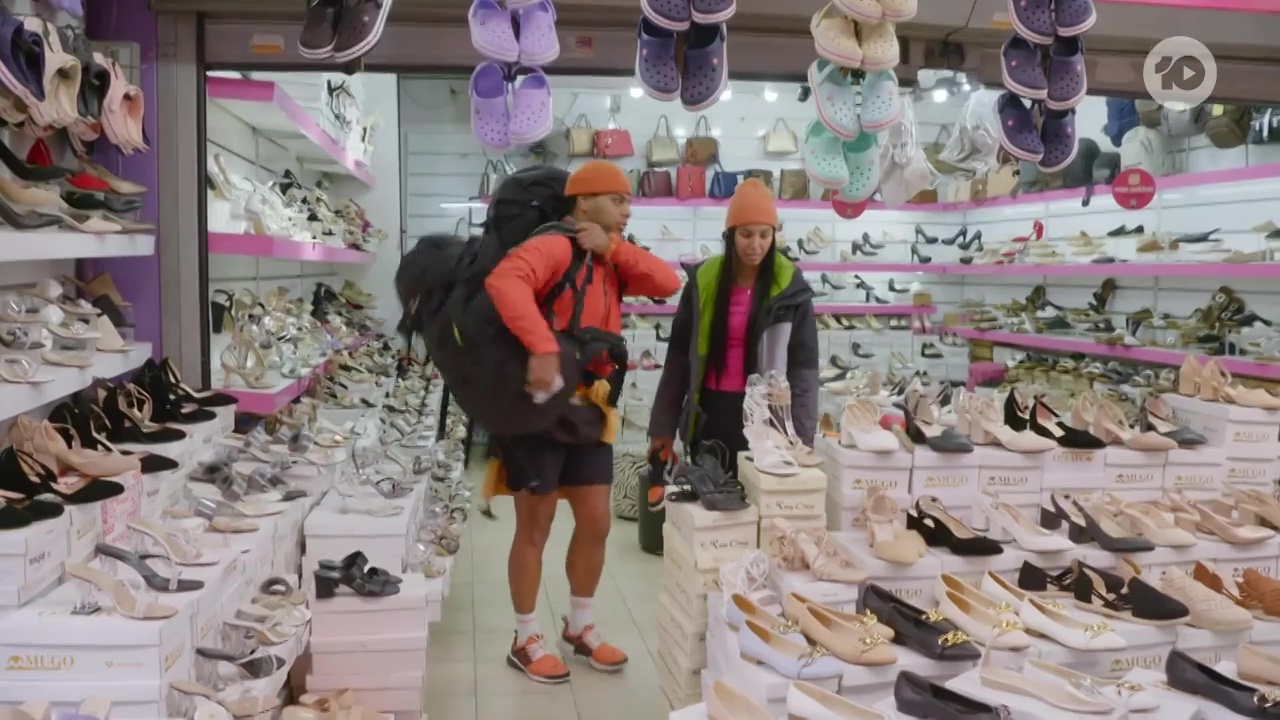 All of a sudden, Chelsea’s gevrek slips off one end of her pole and she decides to just drop the rest on the ground. She wants to quit the entire show and hopes they are last today. But a local helps her pick up her gevrek, she thanks him and she gets a fresh set of bread with Jamus’ encouragement.

Meanwhile, a bunch of other teams deliver their 200 gevrek. But it is the Church Friends who get to the Mat and are welcomed by Ada who fills in for Beau. She checks them in as Team #1 and tells them they’ve won a family holiday to Nickelodeon World at Sea World with a Dolphin Family Adventure.

Ada dances with Angel & Frankie a little bit and tells them to enjoy a break.

At the gevrek, Kelly & Georgia notice Crystal & Reem are not carrying the pole of bread above their shoulder. Knowing they are all fighting to avoid last place, the Newlywed Teachers tell the vendor about it. Crystal & Reem didn’t realize they had done that, but now have to just go back and get more gevrek.

The last three teams are now scrambling to find the marked taxis and to get themselves to the Mat. Kelly & Georgia manage to check-in as Team #11. Ada commends Georgia on eating the kokorec. Jodie & Claire are 12th.

That means Crystal & Reem & Dog are last and eliminated. Beau FaceTimes the Middle Eastern Mates to congratulate them on a good Race nonetheless, but makes their elimination official. He hopes to embrace them soon.

Not a bad Leg and episode. Pretty good, actually.

Let’s get the annoying out of the way first.

If I were on a modern Amazing Race, I would fake a positive COVID test all the way until the Final Leg. I mean, why not? Apparently, that’s the easiest way to get through the Race in 2022. Just pretend you have COVID, stay in quarantine and then wait until you can just slip back into the Race after sitting in a hotel for 20 Legs. Good strategy!

Anyway, it’s not the teams’ fault they caught COVID. It’s the Race’s fault for not knowing how to deal with such situations in a better way.

Back to the Leg, processional tasks are okay from time to time. But when you have 31 teams, it makes those tasks tedious for the most part. And then awkwardly rushed when you just show teams getting the thumbs up one after the other.

The tasks themselves were fine. The belly dancing is an easy, straightforward task. Of course, judged tasks can be all over the place. So you just have be lucky to be one of the first.

They could’ve snuck a Detour in there though. Maybe have the Magic Carpet be one side of the Detour. It’s a creative task that blends in modern technology with a fun, cultural fantasy kind of thing.

The Road Block was great. It’s one of those tasks that’s very TAR. Getting teams immersed in local culture and something that might be foreign to them, but just everyday things to the locals.

The gevrek delivery was great to have all teams have to do it. It’s been done on many TARs before and it usually always delivers. Interesting that the biggest drama from this version of it was a team telling on another team for not holding it correctly. Lol Why were the last teams struggling to hold their poles though? Lol Just put it on your shoulder bro.

Finally, nice to see Ada fill in for Beau. I wouldn’t mind having her fill in every Leg, to be honest. But we’ll see our guest host next time.

Overall, one of the more solid Legs and episodes this season.

The teams were alright this episode. I’m sad my favorite teams Flick & Gabby and Tammy & Vincent are kind of middling now. When teams are so close together, middling can equal elimination. So I hope they can step it up in the coming Legs.

A well-deserved win for Angel & Frankie. I will be surprised if they don’t make it all the way to the end of the 61st Leg. They are a strong team and definitely have a competitive nature. Their little shopping trip was amusing. If it were a different team, I might have been annoyed lol Such as…

Pako & Mori may be the strongest team overall though. They’ve been the most consistently at the top. They can get annoying sometimes, but they’re strong Racers.

Crazy to see Morgan & Lilli in 4th. They’ve been one of the least featured teams. Nice to see Tiffany & Cynthia in 3rd though. They’ve been in the back of the pack, but have gotten pretty good screentime.

Chelsea & Jamus are delivering with the drama. Chelsea freaking out at the Road Block was hilarious, especially since Jamus really wasn’t doing it correctly. But I was cringing a little at Chelsea’s little tantrum with the gevrek. Especially since they made a point to say it was a bit disrespectful to drop gevrek on the ground.

Lauren & Steph, Heath & Toni and Jodie & Claire were the quiet teams this Leg.

Kelly & Georgia were interesting. I can’t really relate to a vegetarian, so Georgia freaking out about the meat was meh to me. But I can definitely appreciate her deciding to go ahead and eat it anyway. It’s a Race and competition. And her eating meat this one time shouldn’t take away from her philosophy. It’s just a game. Now, them tattling on Crystal & Reem was kind of funny though because there are few teams that seemed to be holding their poles in a similar way. Including Kelly & Georgia themselves. But whatever.

I really liked Crystal & Reem at first. But that really all changed when they just turned in Stuart & Glennon’s work and then took offense to Angel asking them to do the same. Hypocritical for that part. But also lazy in the Race sense. They were doing so well until then. Too bad. But not sad.

Lauren: “I’ve got enough bellies for five people. I might take someone out with my belly if I have to wriggle it.”
Steph: “Well, then less people in the Race!”

Kelly: “I’m glad they got penalized.”

Recap: The Amazing Race Australia 6, Episode 21 – “Take the initiative and eat it!”

Recap: The Amazing Race Australia 6, Episode 18 – “We don’t eat on this show ’cause of budget problems.”