Everyone is confused. Kathy wonders if the other group was American or New Zealand teams. The teams huddle together to figure out what the hell is going on. Angel comes across as “bitchy” to Flick.

Beau emerges to officially announce that they are all Racing together now. He passes out clues to all the teams and flags them off a second time. 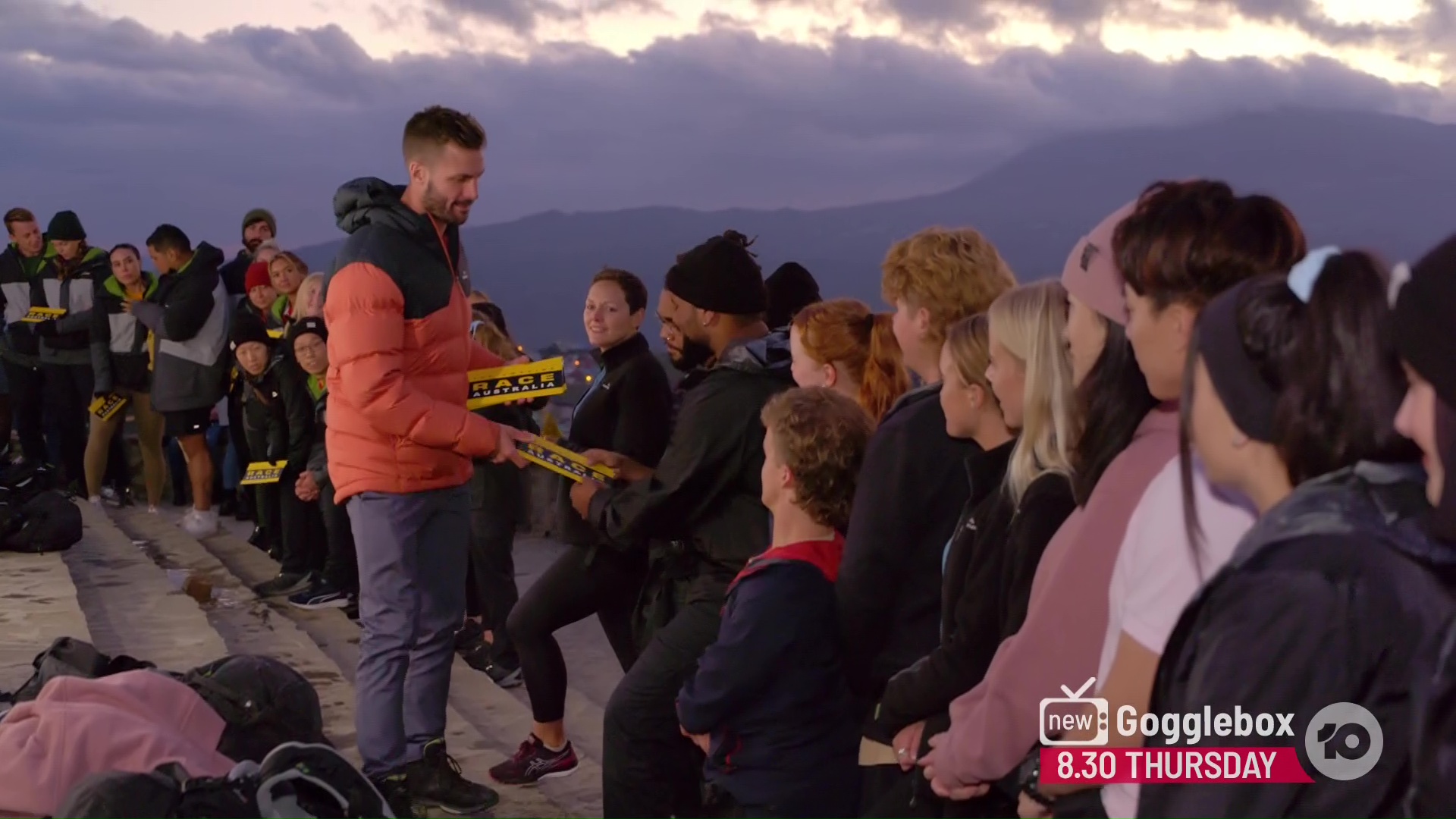 Teams must now make their way to Plaza Outa el Hammam. They must learn the traditional gnawa dance by keeping the tassel spinning on their fez for 90 seconds, twice between them.

As teams hurry to the plaza, some teams believe they should stick to a Sydney vs. Melbourne dynamic. Meanwhile, Toni trips and falls to the ground, hitting her head. Heath is very worried, but she gets up and soldiers on. Lauren & Steph help by carrying Toni’s bag to the plaza.

Dragon Boat Mums Jodie & Claire are the first team to get the thumbs up and they open the clue revealing the Road Block: Who needs a good scrub? Teams must find La Botica de La Abuela Aladdin where they will take a number to sign-up for the order they will attempt the Road Block tomorrow morning.

Teams pass one after the other. A frustrated Jake & Holly are now in last place and have been attempting the task for two hours. They decide to quit the task and take the penalty. But they regret it when they find out they have to take a number and wait in line at the Hours of Operation anyway.

Next morning, teams will face the Road Block. Teams will go into the shop in groups of three. They must search for soap stacks with a small Race flag on them. When they’ve seen it, they must memorize how it looks and then recreate the stack with the same exact colors, order, sizes and shapes. Teams may work together, but will have their soaps judged separately. 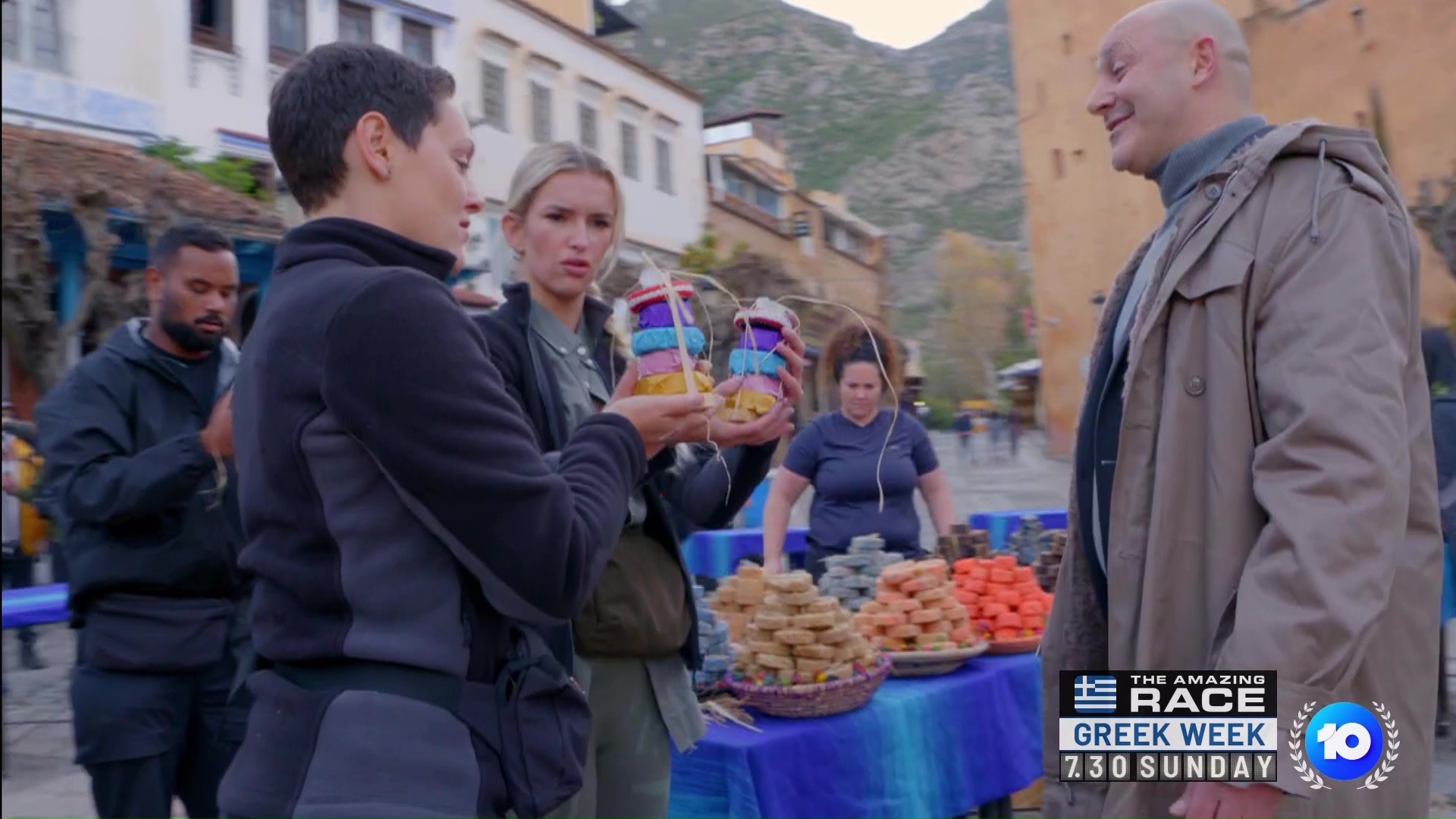 None of the first groups can find the soap stacks on first attempt. But Mori is able to spot the stack and tells Steph and Stu. They split the stack between themselves to remember and go out to recreate it together. Soon, all teams are clued in to the soap stack being on the second floor of the shop.

Fliss & Tottie are first to leave followed by Tammy & Vincent. Before leaving, Vincent gathers the other Melbourne teams to tell them the correct order.

Teams must make their way on foot to find these steps in town. They will use a tiny paint brush to paint an entire step blue.

The other teams get the soapy thumbs up, one after the other. Holly is the last one left and she and Jake hurry to catch up.

It gets crazy at the steps as the teams are all on top of each other. Chelsea & Jamus are first to finish and open the next clue directing them to Chefchaouen’s bluest alleyway. Teams must collect a photo album with pictures of dozens of blue doors. They must find three doors from their book of photos and write down their corresponding street number in order to exchange them for the next clue.

Back at the steps, Angel & Frankie and Crystal & Reem clash as they step on each other’s step. Kathy & Chace finish their step and leave with the Church Friends and Heath & Toni close behind them. Jodie & Claire, Stuart & Glennon, Kelly & Georgia, Sam & Alex and Morgan & Lilli are next. Jake & Holly are able to move into 10th. Tammy & Vincent and Sam & Stu are the last to finish the steps. 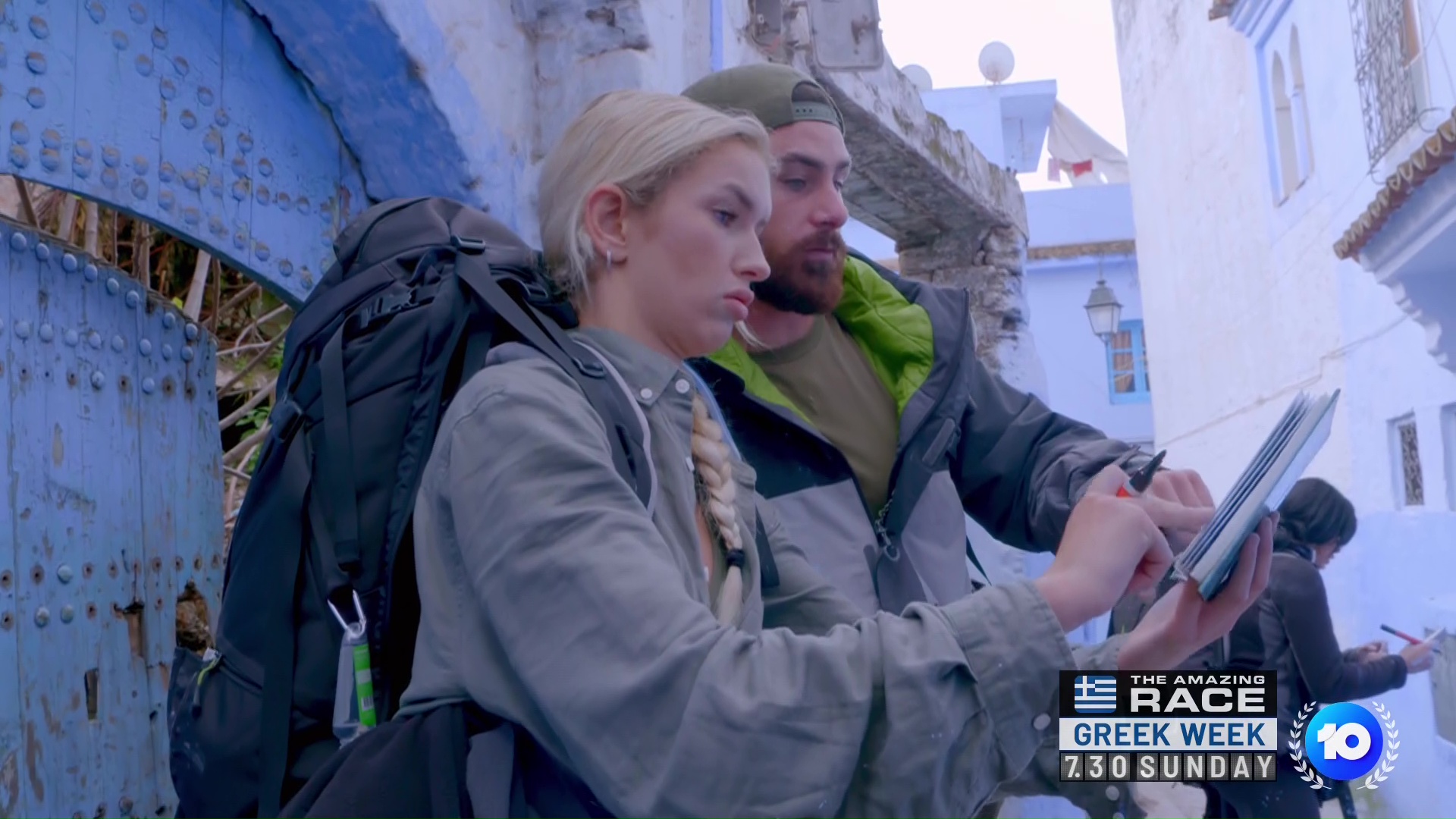 Dragon Boat Mums Jodie & Claire are approached a nice young man who offers to help them with the doors. Jake & Holly run into Flick & Gabby and Pako & Mori. They all share numbers with each other. The other two teams allow Jake & Holly to get a check first because of their penalty.

Teams can now make their way to the Pit Stop at Restaurant Triana.

Beau tells Jake & Holly that ten minutes of their penalty have passed so far.

Beau says there are two minutes left in the penalty. Jodie & Claire arrive and step on the Mat. They are Team #17.

That means Jake & Holly, who arrived first at the Mat are now last and eliminated.

Nah, there’s really too many teams on screen. It’s crazy. Messy. Sometimes even a clusterfrak. Having a split Starting Line is a fine twist. But there’s just too many teams here. I get Australia loving their loooooong reality show seasons. Okay fine. But this episode was a perfect example of how messy it can be with too many people you need to follow.

Now some might point out TAR8 had 40 people Racing at first too, four team members per family. But those were still just ten specific and distinct teams. Here, you have 18 teams running around. Now obviously, the show will be unable to give all 18 teams good screentime (if any). But for most of the episode, you essentially had a procession of teams just checking-in and getting clues. At each Route Marker, it was just one team after another. They didn’t even show some teams getting the clues so they would just randomly pop up again later.

I can’t even get mad about this potential Sydney vs. Melbourne alliance because my head was spinning most of the episode more than the teams at that task. It’s really too much.

That being said, I will prefer this mess over last year’s mess though. I’ll take 42 teams all on top of each other over teams skipping Legs to get pampered or having Stowaways randomly popping in every other Leg.

This army of teams, however, brought about the unprecedented (and yes, “world first”) ending where a team falls 18 spots from 1st place to eliminated.

But this makes it the third episode in a row where we see TARAu’s odd penalty rules rear its ugly head. How come Jake & Holly had to serve their penalty at the Mat whereas the two teams in the first two Legs had to wait out their penalty at the task they quit on? Of course, here it wouldn’t have mattered if they waited out the time at the gnawa task since there was an Hours of Operation. But if that was the case, why not have them do the penalty in the morning before the Road Block? That’s what Bren & Anja did for their first(!) penalty.

And even though 30 minutes doomed them here, it is still a lenient penalty. But whatever, most of Network 10’s TARAu is random and off the cuff it seems.

Anyway, it was very nice to see a different city in Morocco for a change. Chefchaouen might have similar cities like it around the world. But it is a different vibe for a Moroccan TAR Leg which will usually be limited to Marrakech or the desert.

Having teams running around town definitely helped to keep them close together. All within 30 minutes of each other! But the Leg was pretty barebones. It felt like a Pekin Express episode or something, not that it was barebones. But in how it played out. Just one task after the other without really getting a sense of where teams were compared to each other.

I know the night atmosphere was best for the gnawa task. But perhaps having the entire Leg start in the morning instead. Or even putting the gnawa task at the end so the Leg ended in the evening.

It’s always great to have all teams neck and neck all day. But it’s hard to appreciate or enjoy it here when there’s 43 teams and you can’t even keep track of where everyone is.

Ten teams? Keep them within minutes of each other. But 56 teams? Spacing them out is actually better. So I would’ve held the teams until the next day, or rushed them into Chefchaouen earlier so they ended in the evening instead.

I want to point out that it’s interesting how they used the new graphics for the leaderboard (another TAR China-ish element!), but did not adopt it for the rest of the show. Just something I noticed.

Overall, Chefchaouen is a great location and it’s awesome to see it on the Race. But TARAu will need to go back to the drawing board next season (if there’s a next season) to find a better way to fill 24 episodes.

My goodness, where do I even begin?!

Tammy & Vincent were my favorite team from Episode 1. But when Tammy said “There better not be another Asian team,” I was shocked! We need MOAR Asian teams! We need more Asian contestants on reality shows. What was she talking about?!

I know she was kidding. But seriously, the networks pretending to promote diversity, but always disregarding Asians? That’s a discussion we need to have.

I still love the Scientific Siblings as well as Flick & Gabby and Kathy & Chace. I also really liked Jake & Holly this episode and was sad to see them go, even if they did quit unnecessarily. I get they could be frustrated after TWO hours. But other than that, it was wonderful to see their story fleshed out this episode. Even though that seemed to be a clear sign that they were doomed.

*exhale* Do I really have to go through all 29 teams?! I legit think some of them didn’t even appear in the episode.

The one team that definitely did appear though was Angel & Frankie. They are definitely an uber-competitive team and I would love to see them go far. If only to rile the other teams up. Let’s get more conflict instead of hand holding on TAR please! They will be a tough team to beat.

Jodie & Claire definitely owned the first part of the episode with their momentary first place position. And I definitely gasped when Toni fell and hit her head. Seeing her push forward though, even when Heath was worried about her, is inspiring to see. Kudos to Lauren & Steph for helping them out as well.

Chelsea & Jamus emerged a little bit this episode. Crystal & Reem fell behind a little. Everyone else was just part of the pack.

I hope the next couple of Legs are all eliminations. We need to thin out the herd sooner rather than later! lol

Recap: The Amazing Race Australia 6, Episode 13 – “It’s not going down the hole.”

Recap: The Amazing Race Australia 6, Episode 12 – “Don’t feed any kids along the way.”