Grandma Yacchan is singing “Colorful☆Wonderful” as she serves “Stacey’ a delicious Colorful sundae. Kaito, Zyuran, Gaon and Secchan join in as well. “Stacey” thanks Yatsude and leaves.

As soon as he’s gone, the others ask Grandma Yacchan if she’s noticed anything different about Satoshi. She says he seems much less lonely now and that the shadow hovering over him seems to be gone. She tries to assure them that people can change over the smallest things, just like how Magine has become much happier as well.

Speaking of, Magine and Vroom are heading home from grocery shopping when they run into Omikuji World who is slapping people with very bad omikuji fortunes. People experience various levels of bad luck depending on what is printed on the fortunes. 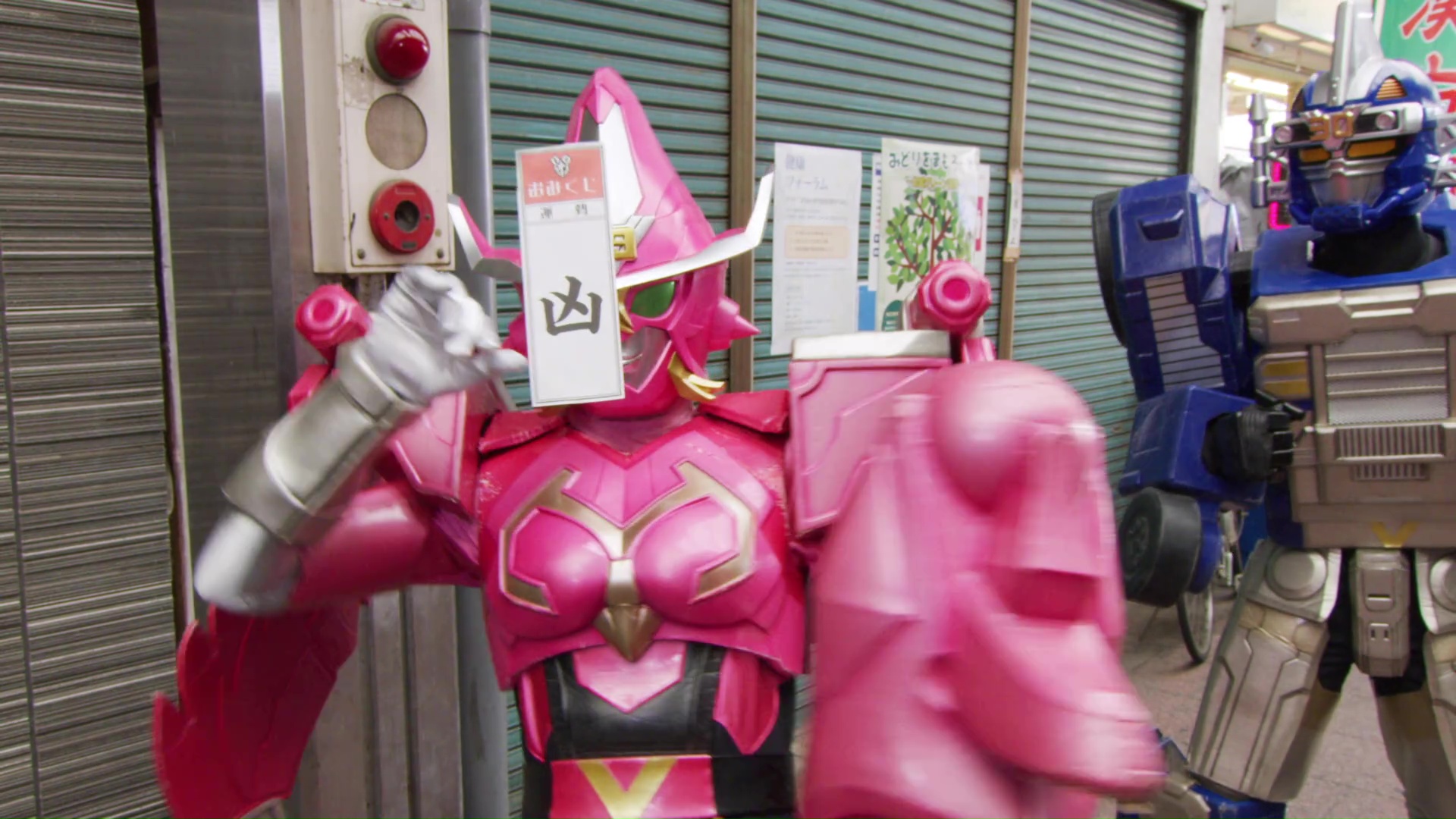 Magine and Vroom try to fight Omikuji World, but get slapped with bad luck fortunes themselves. They end up sliding into a pile of trash as the others arrive and the Tojitendo escapes.

Over at the Palace, Ijirude is briefing Bokkowaus on Omikuji World. Bokkowaus thinks this could be a great opportunity to defeat the Zenkaigers. Barashitara snipes that Ijirude is just trying to suck up to Bokkowaus and get back in his good graces.

Gege says now is a good time especially with the pirate family gone from this world. Bokkowaus says that’s thanks to the World Gege sent into action. Barashitara notices Gege’s odd hesitation at that compliment.

Later, Barashitara finds Gege altering the Parallel World Gates and wonders what he could be planning. Especially if he was responsible for letting Stacey escape.

Back at the shop, Vroom and Magine continue to experience horrible luck. Gaon wonders if an omikuji-hit person will continue to get a new fortune every time they open something or pick the fortune up.

Secchan turns on the breaking news on TV showing the city in chaos due to bad luck everywhere. Kaito, Zyuran and Gaon hurry out and quickly find Omikuji World. They henshin and must first battle Kudakks. But Omikuji World shoots good luck fortunes at the Kudakks rendering them much more powerful against the Zenkaigers who have to deal with bad luck.

Magine and Vroom arrive and try to help. But their bad luck continues and Omikuji World shoots more bad fortunes at Kaito, Zyuran and Gaon. The five of them end up getting pooped on by birds.

Secchan suggests Kaito use Kyuranger Gear to summon some Yosha Lucky vibes. But he gets struck with more bad luck before he can even lock it in. 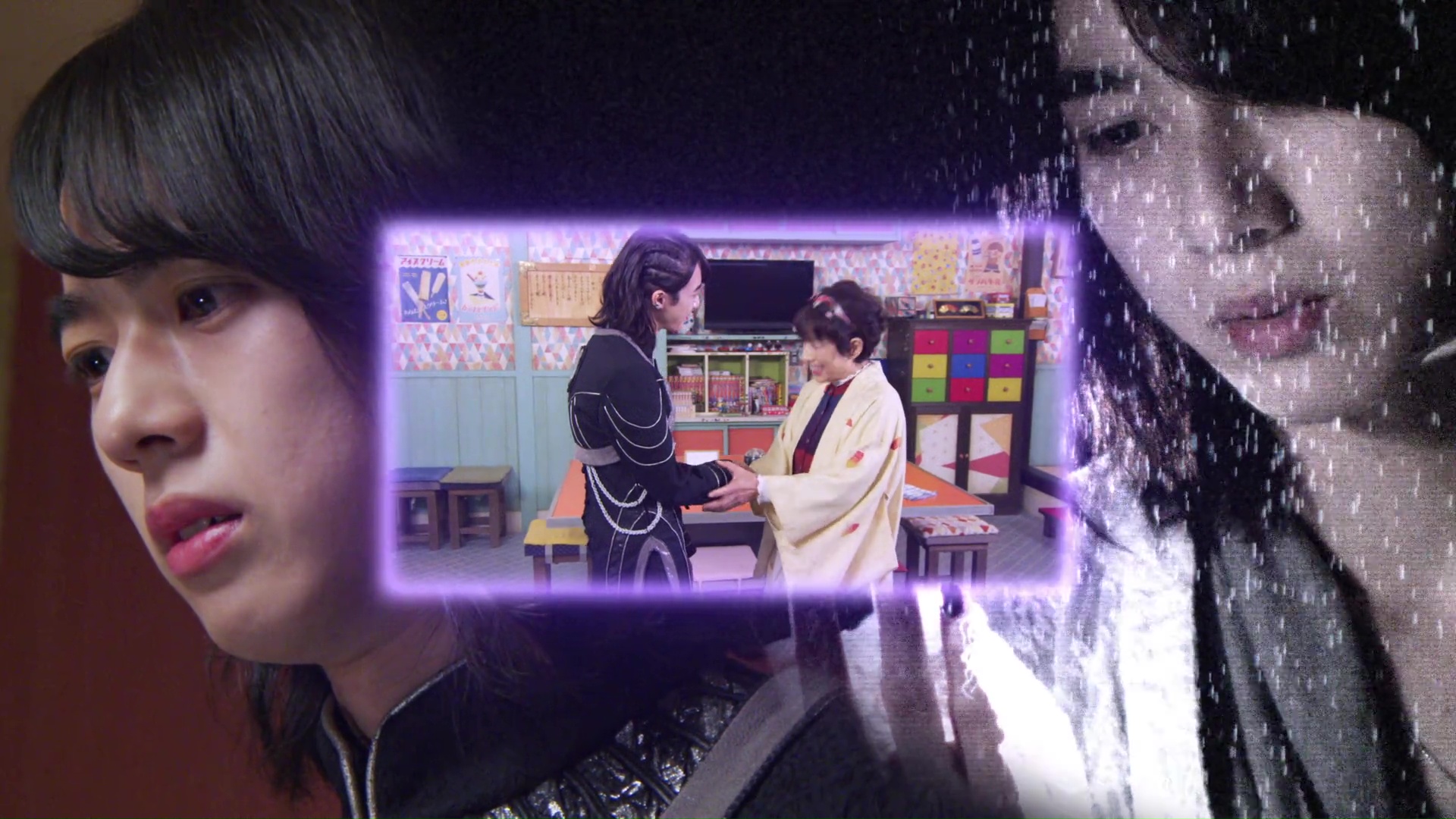 Elsewhere, Stacey wakes up in a karaoke room with the TV playing the music video for “STACY THOUGHT”. He wonders where he could be and remembers he must have been able to escape the Palace.

Stacey pulls the Colorful coupon Grandma Yacchan gave him and thinks about how he promised never to see her again. Stacey ends up subconsciously making his way to the shop. But before he walks in, his eyes glow and the other being possessing his body takes over once again.

“Stacey” follows a father and son who have just come out of the shop with a bag of treats. He puts his arms around them and tells them it’s time for them to go home. “Stacey” opens up a World Gate and throws them in.

“Stacey” smiles that everything is going according to keikaku.

Back on the battlefield, Kaito summons legendary Sentai. But the three that pop up are three of the unluckiest Sentai members of all time. (Read: they died.) Secchan is about to call Zox until he remembers they’re not on this world anymore.

Magine uses her crystal ball and it shows Super Bad Luck. But Magine starts to laugh hysterically. Her fortunes are always wrong. Which means that she will actually have super best good luck!

Magine charges toward Omikuji World and gets beat by him. But she will not give up. The others are inspired by her positive attitude. And with Magine’s character song playing to hype them up, they fight through the bad luck and even use it to their advantage with creative attacks.

They hurl Magine at Omikuji World with a Pink Vibrance attack and that destroys him. Dai Omikuji World appears and plasters fortunes all across the city.

Magine is a bit tired from the attacks, so Kaito, Zyuran and Gaon form ZyuranGaon and then go ZenkaiOh Super Zyuran. But Dai Omikuji World continues to use good luck to his advantage.

Suddenly, “Stacey” appears, holds his hand out and sucks away all the fortune slips from the city, crushing them in his hand.

They reunite with Magine and Vroom who tell them that it was Stacey who restored the world. They are shocked.

“Stacey” decides it’s time to come clean with them. The truth is he created these worlds. 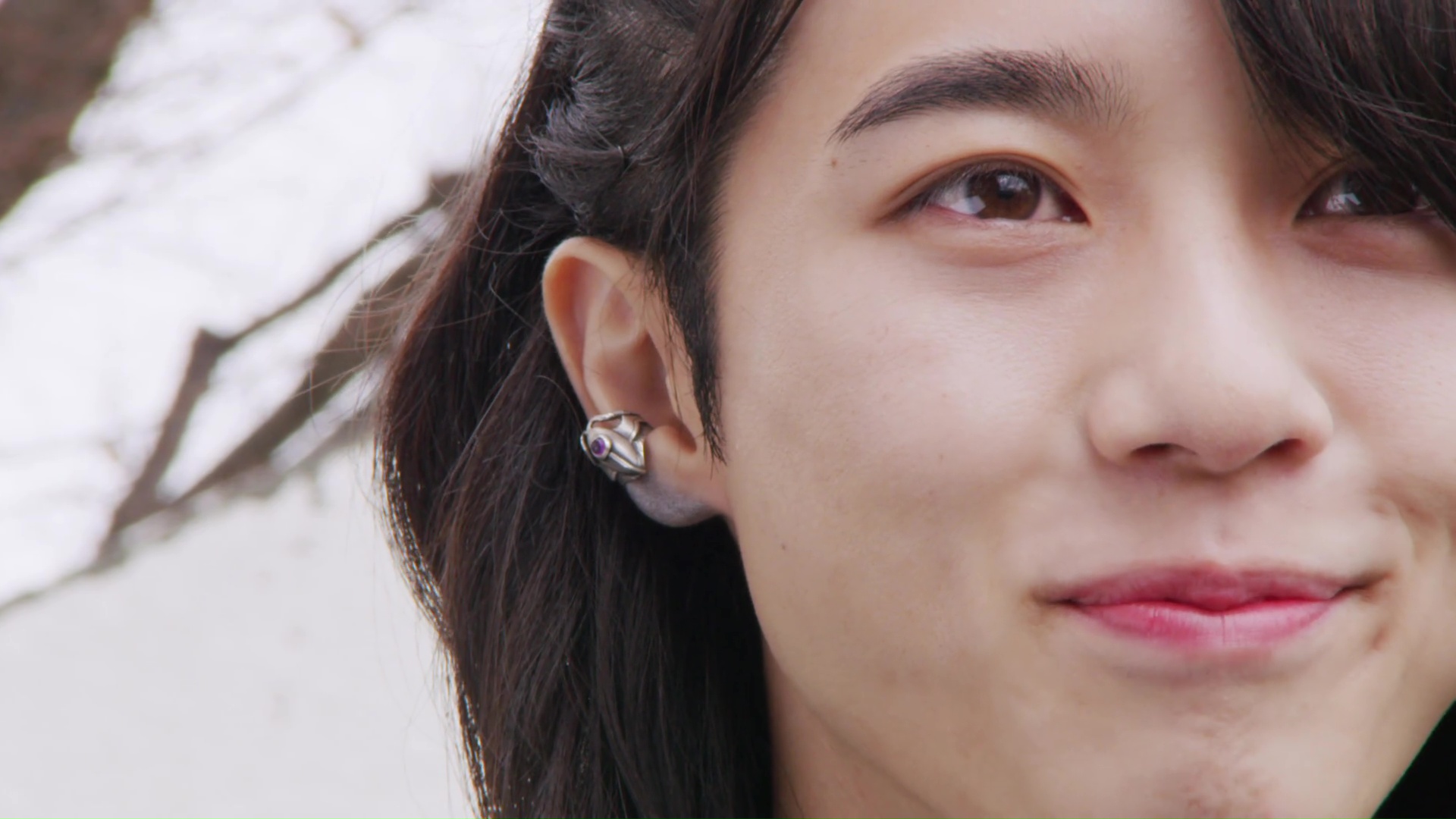 Gegegod? Uhh… okay? Lol I had the same exact reaction as the Zenkaigers when he said that. lol

I don’t know if they’re trying to plant seeds that something/someone else is possessing Gege who is then also possessing Stacey. I guess they could and point to the different voices to show that something is amiss with Gege. (I vaguely remember a reference to the change in voice actor for Gege before, but I’m not sure.)

That little bit of hesitation from Gege when Bokkowaus talked about the World he sent out was suspicious. Was he talking about SDtopia World? And that shuffled the pirates away from Earth? I dunno. I think my brain has shut down to trying to figure out Zenkaiger and I’m just resigned to hop along for the ride. lol

Anyway, I can’t really judge how good this potential Gegegod twist could be until we actually see it play out next week. It really could go either way. But we’ll see.

I felt so bad for the father and son “Stacey” first tossed into the portal. Like what the hell man?! Jerk! But that’s obviously part of the plan for whatever this mysterious final boss is planning.

It almost feels like a clean slate on the Tojitendo side, to be honest. At Episode 45, that might seem weird. But again, we’ll just have to wait and see. I have no expectations anymore on that aspect of the story. Will just have to go with the flow.

I really don’t understand what that whole scene was with the side-by-side of Stacey and the “Stacey Thought” music video though. Lol Was it just to promote the new character album? Or is there a deep character plot point there for Stacey? Again, I have no idea! lol

The show teased the Satoshi-Yatsude connection again. But I’m not sure anymore where they could possibly go with that now. Or if there could even be a satisfying conclusion to that plot thread either.

Speaking of character moments, it was a pseudo-Magine focus episode. It was her positive attitude that helped them overcome their bad luck. They made their own luck by using clever ways to outsmart and outplay the bad fortunes. Grandma Yacchan mentioning how Magine is much happier now is a nice reminder of how she had been really insecure and shy at first. Especially when it came to her fortune telling. Using Magine’s wrong fortunes in a positive way was fun.

But while I wish they had dug into that a bit more (as well as into the backstories of the other Kikainoids as well), it’s fine here. And resulted in some nice moments.

Overall, an okay episode. Another fun and enjoyable one that I wish I was more excited about.