After digging through the rock face, Takamichi is surprised Juuru followed him in. Juuru says he wants to help with the treasure hunt, but Takamichi says No thanks.

Takamichi finds the spot based on the clue in the notebook. Juuru excitedly unfolds his shovel to help dig, but Takamichi calls on Shiny Breaker and bursts through easily himself.

Juuru is excited when Takamichi uncovers a Kiramai Stone. But Takamichi wants nothing to do with it.

The Kiramai Stone says hello and Juuru invites him to come with. The Stone hops into Juuru’s hands and Takamichi says they would have no use for a small Stone like that.

Muryou calls as SL Jamen chugs through downtown. The other four try to stop it, but SL Jamen does not want to fall behind schedule. It speeds forward and almost hits two garbage collectors. But Juuru tosses the Kiramai Stone in the air and pushes them safely out of the way. 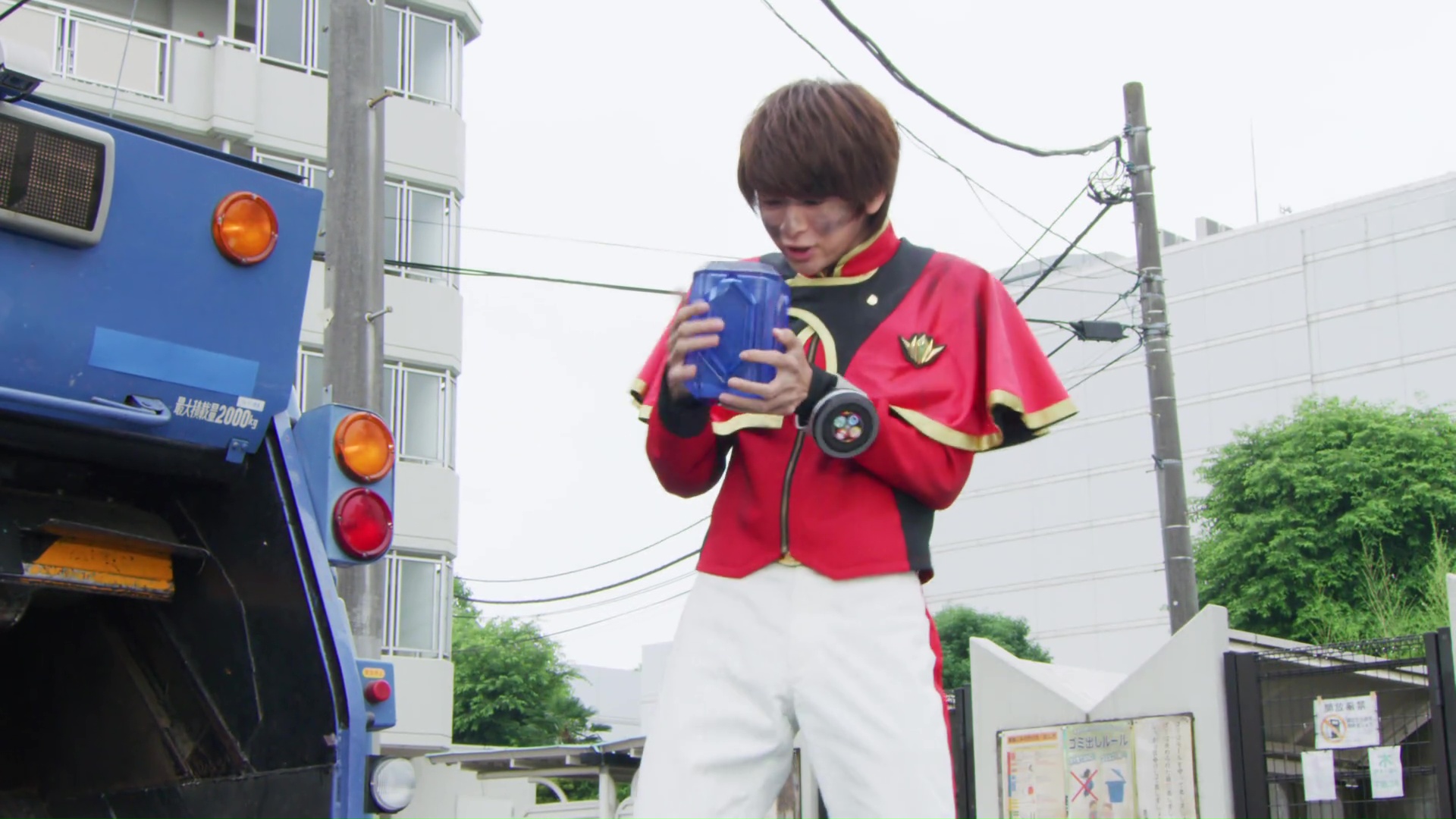 Before the Kiramai Stone falls into the garbage truck, Sena makes a good catch. The Kiramai Stone hops back into Juuru’s arms and Sena points out Juuru’s face is full of soot.

Takamichi henshins and is able to stop SL Jamen in its tracks. The others are able to catch up, but Takamichi’s attack on SL Jamen also hits them. Tametomo argues with Takamichi and that allows SL Jamen to speed away.

Juuru catches up as well. But both he and Takamichi are covered in soot so they decide to go to a local bathhouse.

Watching the proceedings, Garuza laughs at Takamichi’s self-centered nature and says he should continue acting that way.

Garuza flashes back to Crystalia when Mabushina was helping Takamichi move the throne even though he says he could easily carry it himself. Mabushina says it’s more fun if they work together and Takamichi initially agrees. But Uncle Garuza comes in and tells Takamichi he doesn’t need to humor the weak when he can handle things on his own. That’s when he can shine.

Takamichi seems to agree with his uncle instead and proceeds to carry the throne himself.

Takamichi remembers the same moment and says to himself that working with others is just not as efficient. He believes he shines brighter on his own.

Juuru admires Takamichi’s confidence, but wishes they could fight together.

While Takamichi and Juuru are enjoying their baths, the others try to figure out the Jamenshi’s plans and wonder if it has something to do with its route.

Juuru comes out first and says Takamichi will take a little longer in the bath. Shiguru uses his actor’s charm to thank the bath house owner for opening up early for them.

Muryou and Mabushina call to update from the coconut tree with more on the Jamenshi’s route. The Kiramagers realize the Jamenshi is circling back to its original departure point. And right in its tracks is this very bath house.

The Kiramagers quickly henshin when SL Jamen comes rumbling through the bath house.

Carantula explains to Garuza that SL Jamen’s circular route will engulf the city in darkness and create a permanent portal for them. 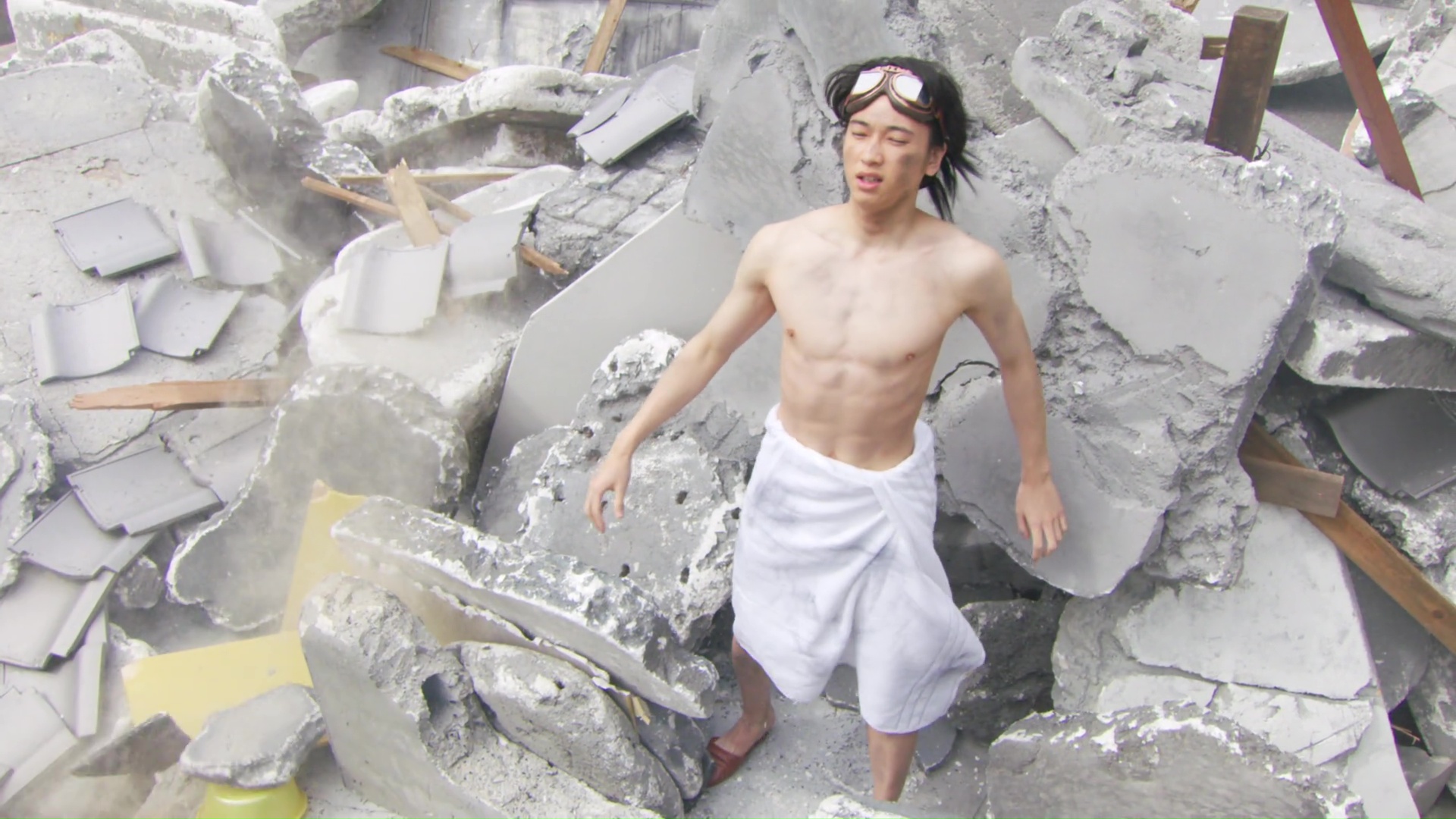 The Kiramagers are able to save the bath house owner as the building collapses. Takamichi emerges from the rubble and says he’s fine. He wants to confront SL Jamen for interrupting his bath, but it continues chugging along his route.

Takamichi tries to henshin, but he doesn’t have his Changer since he left it in the dressing room. He starts digging through the rubble as the others have to chase after SL Jamen.

Takamichi struggles with the rubble and again remembers his Uncle’s words to him. Takamichi admits to himself that there’s nothing shining and sparkling about him being by himself. Between digging here by himself and Crystalia’s fall… 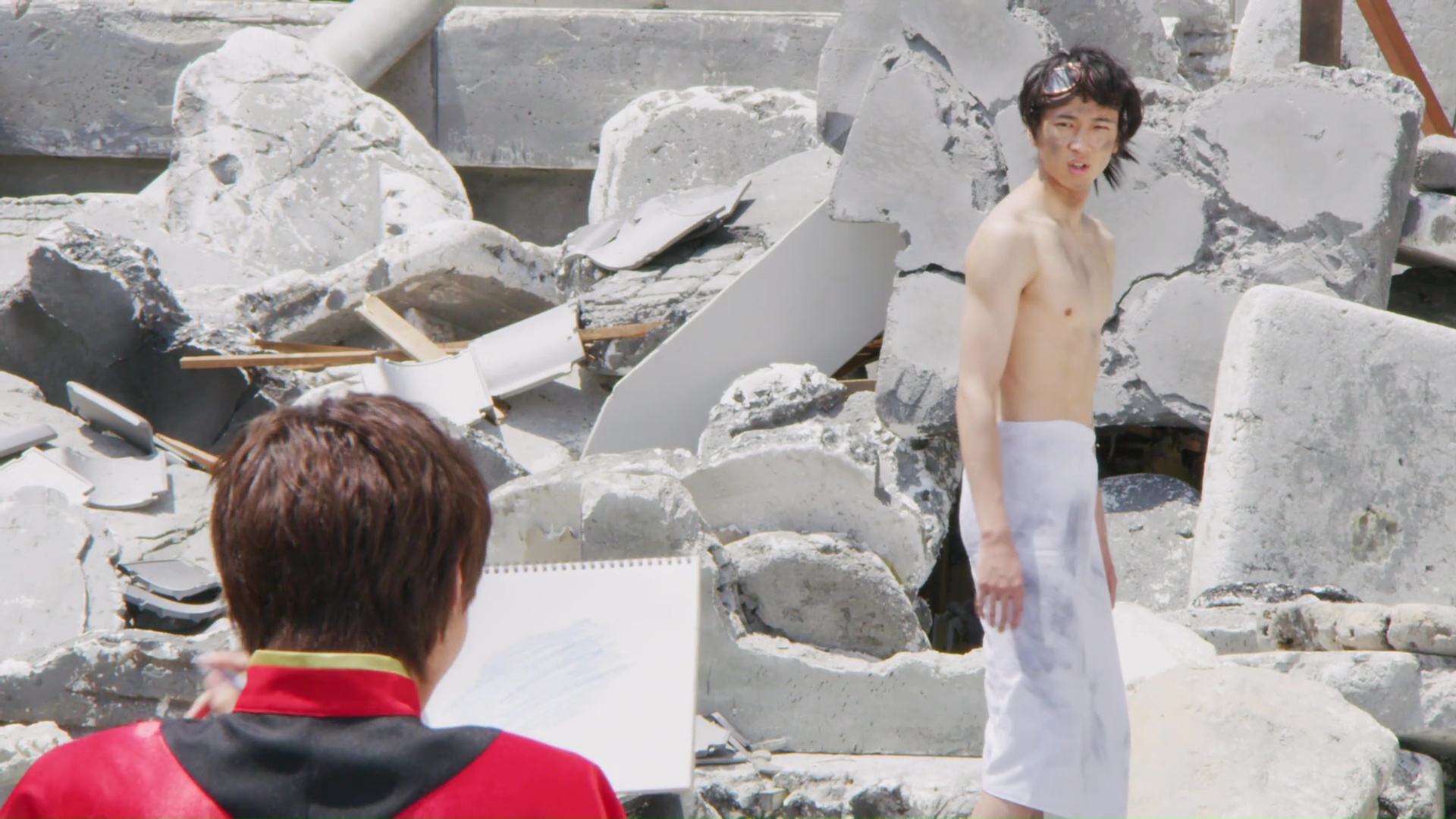 Juuru comes running. Before Takamichi can deny the help, Juuru draws a brand new Mashin inspired by the garbage truck earlier. The Kiramai Stone comes flying in and turns into Mashin Duston.

Juuru starts tossing the rubble into Duston. But Shovellow, along with Carry and Lifton, arrive after Tametomo told them to come help. They quickly clear out the rubble.

Juuru explains that whatever gets loaded into Duston gets compressed. Takamichi is in awe and remembers his hasty words earlier about the Stone being unhelpful. In reality, he’s the one who needed the help. 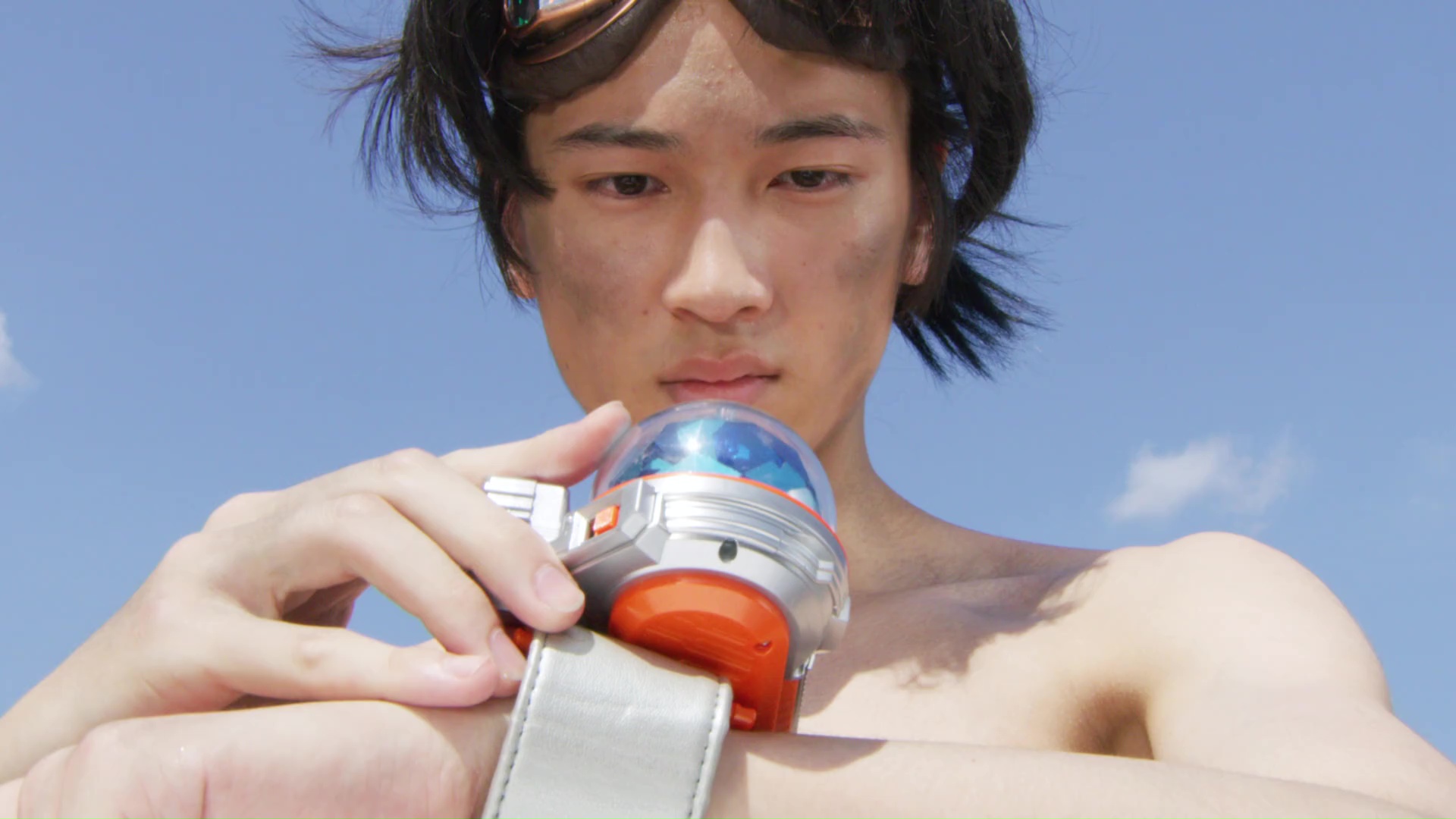 Juuru says it’s nice to have help. And just like that, the rubble is cleared and Takamichi’s Changer is in sight.

Mach arrives, upon Lady Sena’s request, to pick up both Prince Takamichi and Juuru. They hop on and hurry over to the others who are having trouble with SL Jamen.

Takamichi acknowledges that he might have been wrong about working alone. He asks the others if they can fight together and wonders if he can join in the roll call.

The six Kiramagers do a roll call together for the first time.

They realize they must stop SL Jamen’s smoke. But to do that, they need to stop it from moving. Juuru has an idea. Takamichi acknowledges him as the leader and says he will take care of holding down the Jamenshi while the others work on the rest.

Juuru asks Duston to give them the compressed rubble and the Kiramagers are able to use it to plug up SL Jamen’s smokestack.

Garuza arrives in Smog Jouki and tells SL Jamen he can borrow it for now.

Takamichi confronts his Uncle Garuza and asks if his advice of shining alone was just a ploy to sabotage him. Garuza admits it and says it’s too bad Takamichi didn’t stay ignorant to that fact.

Takamichi says he’s got five friends now and that sparkles much more than Garuza ever could. That also makes him much stronger. Garuza says they are no match for him as he’s got all of Yodonheim at the tip of his fingers.

The others hop into Kiramaizin and says they’re all with Takamichi. Juuru summons Mashin Express and says Takamichi can hop in. It combines with Smog Jouki to form King Express. Takamichi shakes SL Jamen out of Smog Jouki. 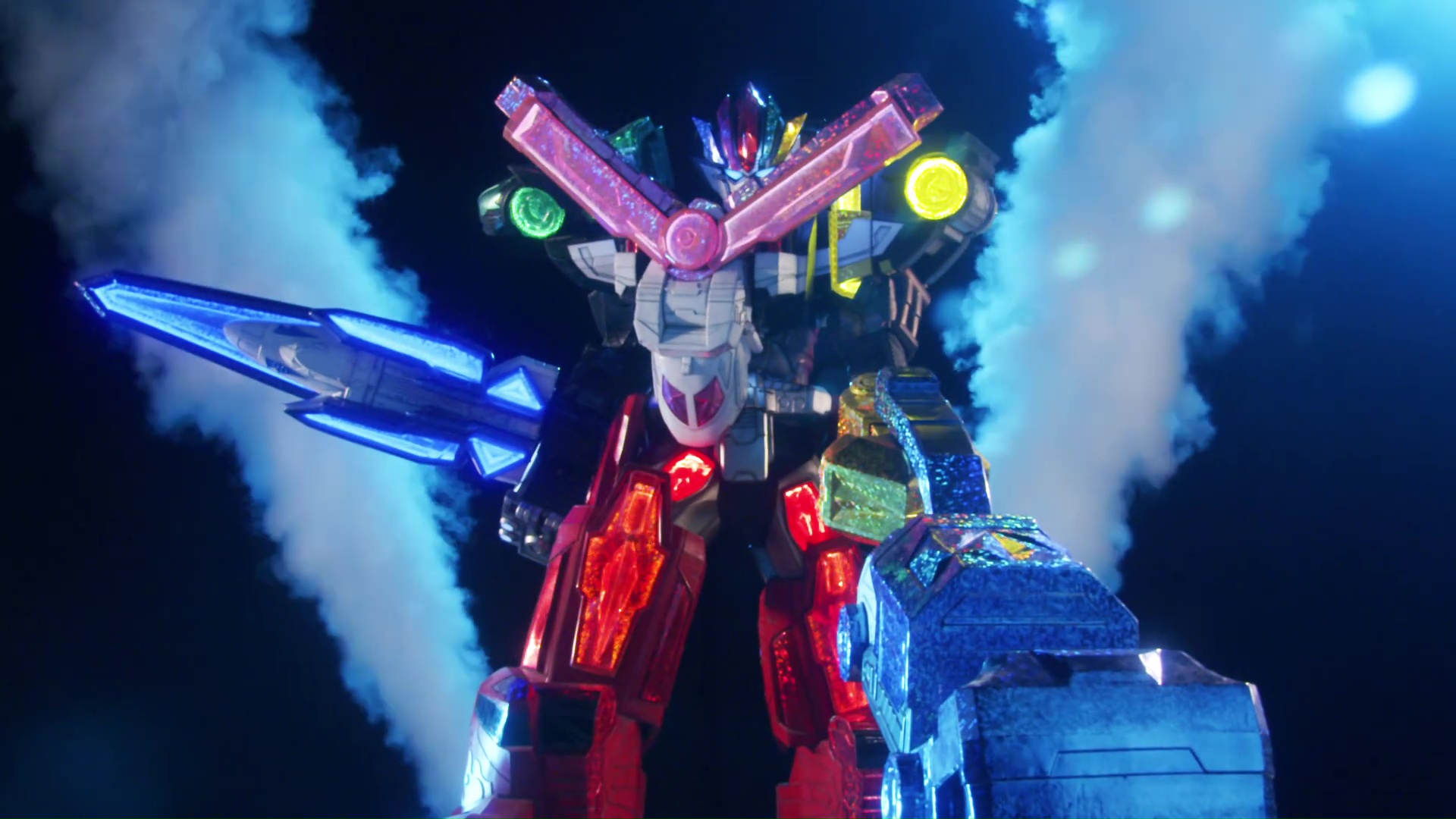 Diesel Basra steps on SL Jamen. Juuru has another Hirameking and calls Duston to come help. They combine into Kiramaizin Duston and together with King Express finish off the Jamenju with a pair of finishers.

Garuza takes back Smog Jouki and heads back to the darkness.

The Kiramagers tell Takamichi he was very cool and he thanks them for everything.

Back at the coconut tree, Muryou comments on how awesome Juuru continues to be as he was able to get his stubborn older brother to work with them. But Mabushina isn’t so sure that is a good thing. 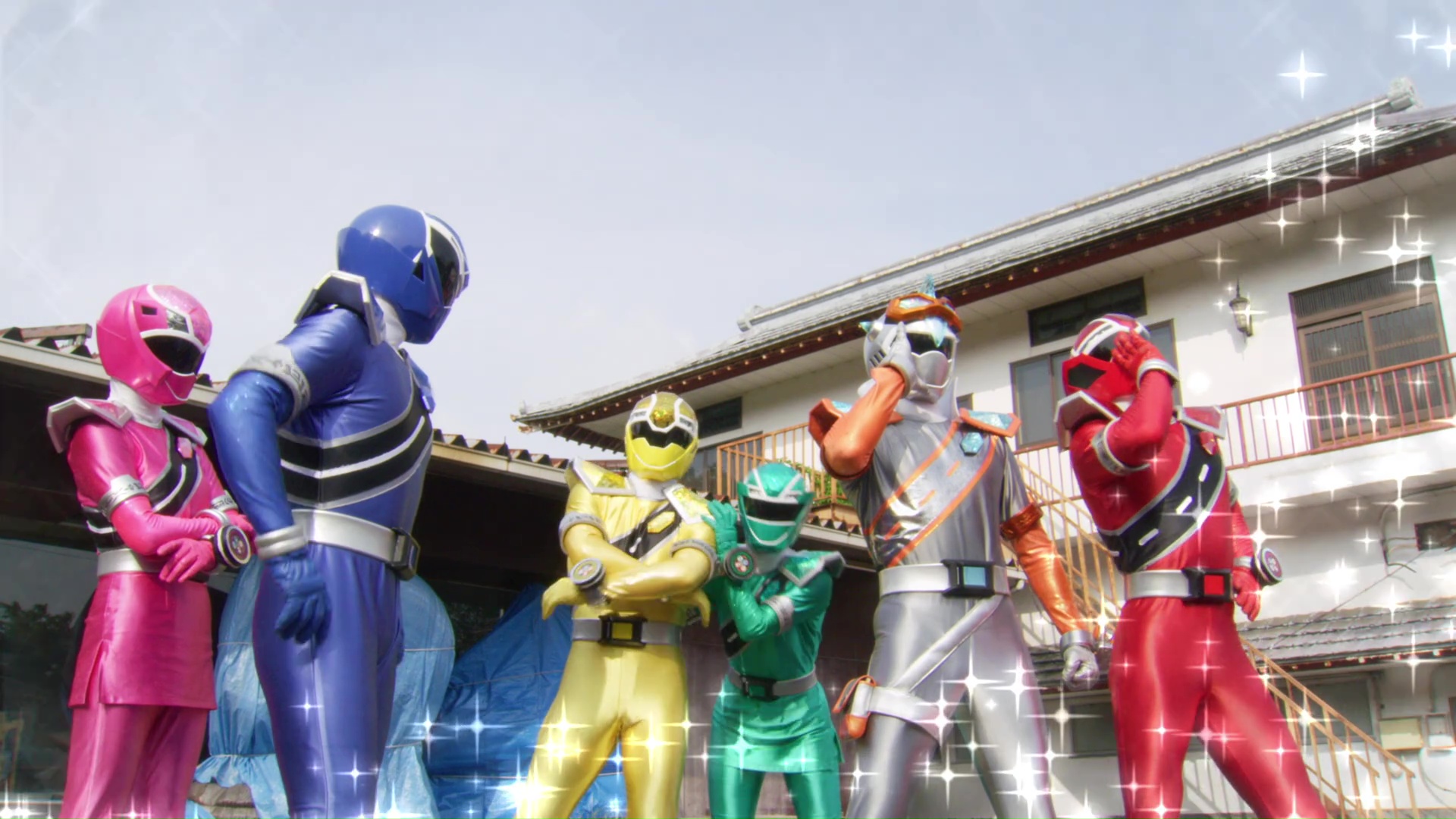 Definitely a fun episode. While this was the typical 6th Ranger teamwork episode, it had other more important tidbits too.

While it was a quick resolution to that backstory, it was interesting to see Uncle Garuza’s influence on Takamichi so directly. Why was Takamichi so susceptible to that dark influence in the first place though? Especially since we know he and Mabushina were really close. Hopefully that will play out more as we resolve Takamichi and Mabushina’s distance, which we also added a layer or two more to as well.

We got to see more of Takamichi’s inner dilemma and again, we know he’s a nice guy. So getting to understand where he kind of fell off the tracks (Oho!) should be a good story moving forward.

Speaking of, my ToQger-loving self loved all the train action. Kiramager really feels like ToQger‘s baby or something. And I’m certainly all for that!

Mashin Duston had a pretty good introduction as it worked well with the main character-driven plot of the episode.