Evox is excited about a malware-filled dart that will infect the Rangers’ new weapon.

Over at GBHQ, General Burke introduces the Beast-X King Zord, a secret project he and Mayor Daniels have been working on. It is a top-notch weapon made with lion DNA. The plan is to build an army of them to protect the global network of Morph-X Towers.

Megan walks in with Mayor Evox and the Rangers are completely and utterly repulsed by the sight of her.

Megan steps forward and says she is truly sorry for what she did before. But when she was approached by the mayor, she was ready to help.

Megan shows them the wrist activator that can summon the King Zord, but for this presentation, she will control it from her tablet. She directs them to the screen and shows them a majestic new zord.

What they don’t know is Blaze and Roxy are already in the woods and they toss the dart right at the zord, putting it under Evox control.

Megan finds she is now unable to contact the King Zord and that malware has infected it. Nate and Commander Shaw throw Megan dirty looks as Devon hurries over in his zord to stop the King Zord from rampaging any more.

Nate continues to berate Megan with Mayor Evox piling on, knowing his plan is moving along quite well. Nate jumps in to be the hero of the day and tells Megan to stay the hell away from their work.

Ravi and Steel hurry over with a dish.

Megan tries to offer help to Nate who barks at her to back off.

Megan appeals to Zoey and again apologizes for all the wrong she did before. She understands now how selfish she was and how she let her ambition hurt other people. But she has changed for the better and she sincerely wants to help. That’s why she helped build the new Zord to show them how much she’s changed and wants to help.

Megan knows what Nate is planning and it is going to backfire.

Zoey will only believe her boyfriend and walks away.

In the woods, Ravi and Steel set up the dishes to send new programming into the King Zord. They shoot at it, but Nate’s plan completely fails. He merely activated its Battle Mode, which Megan installed and would’ve told them about had they not ignored her sincere attempts to tell them.

Nate says he has to think of something. Zoey says Megan might be able to help, but Nate snaps at her before eventually setting his huge ego aside to run to Megan for help.

Megan explained that the signal Nate sent to the Zord activated an auto-defense mechanism. Something Nate could have never come up with.

Megan says they must use something to physically attach new programming just like Evox’s crew did with the dart. Happy deus ex machina, Nate has a new Ultra Bow.

Ravi arrives and is surprised to see Megan breathing the same air as them. But Nate admits what was true all along, they are all on the same side.

After implanting lion DNA into the bow, they now have the Beast-X King Ultra Bow. Nate finally thanks Megan for her genius work and the Rangers hurry out.

Blaze, Roxy and Tronics meet them and they battle. Nate slinks off to shoot the arrow at the King Zord when Devon has a hold of it.

The King Zord turns back into a lion and settles down.

Mayor Evox is pissed and stomps off.

Blaze hops into his own personal zord and battles Devon. But the King Zord is able to help them defeat him when they activate the Beast-X King Zord Battle Mode.

The others defeat Roxy and they all head back to GBHQ. 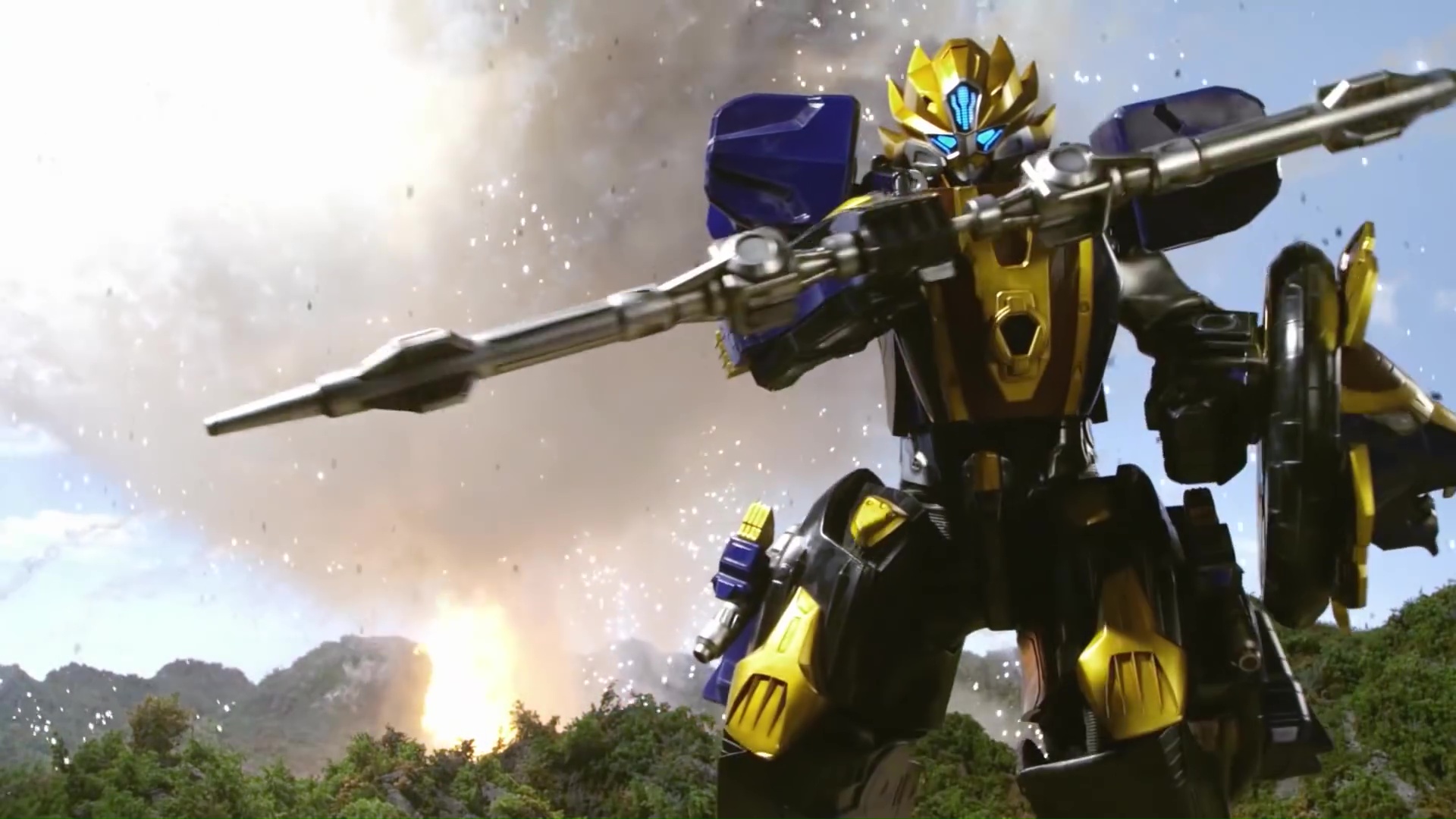 Nate sucks up to Megan and hugs her. Megan thanks everyone for allowing her a second chance.

I honestly was so excited to learn Megan was coming back for an episode. She was one of the most refreshing and interesting things about the first half of Beast Morphers. Her total nastiness and bitchiness last time was actually pretty awesome since it helped break the blandness of the season up to that point.

She was also a refreshing character that you don’t normally see on Power Rangers. They tend to avoid making humans too nasty. So it was great to see her. And obviously, she is one of the memorable things from last year too.

The scene of Devon and Cruise fighting the King Zord was actually one the most exciting sequences of Beast Morphers so far. I guess that was because it was Go-Busters footage. But the music sounded great paired with the footage. Definitely not the normal, stilted Beast Morphers action scene.

The unmorphed fight in the woods was actually good too. Very much above average.

So the episode benefited from being all action with the only story/character-related stuff being Megan-releated.

Nate isn’t a tech god, so it was nice to have him knocked down a peg. There is such a thing as humility, after all. And the show tries too hard to make Nate out to be some kind of infallible genius.

Overall, a positive episode thanks to Megan.