The Ryusoulgers run toward Koh who has collapsed to the ground. Bamba charges at Nada and after an unflinching pause, they battle.

Bamba and Nada have their blades at each other’s necks when Nada pauses before Gaisorg engulfs his person once again. Gaisorg knocks Bamba back. 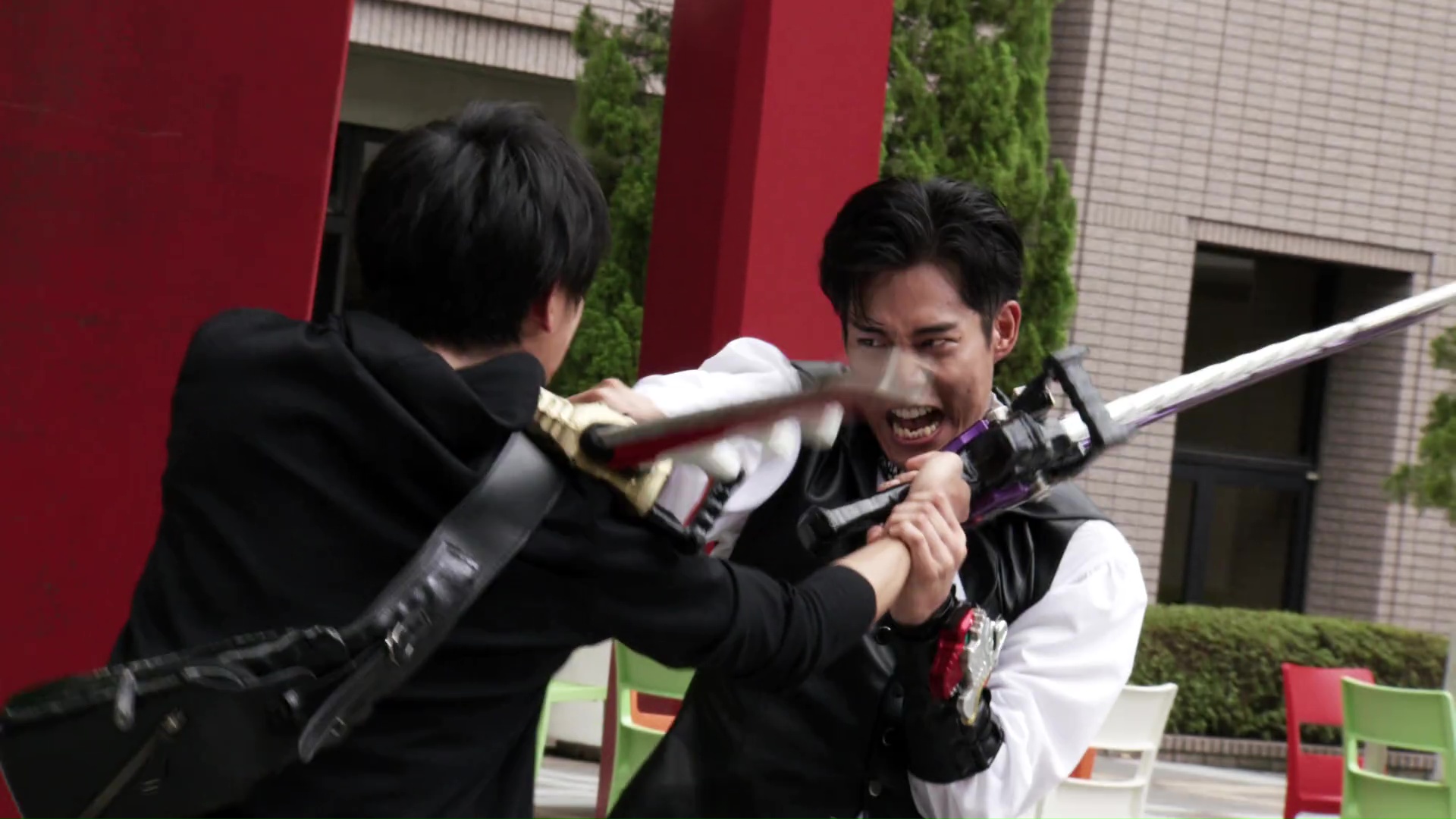 Canalo prepares to henshin to take Nada on as well, but Melto suggests they fall back for now. Asuna uses KakureSoul to whisk them back home.

Melto tries to use KagayakiSoul to heal Koh’s wounds, but it does not work at all. Seto appears and says KagayakiSoul won’t work because the Ryusouls were not created for the Ryusoul Tribe to use against each other.

As Koh is in pain, Towa tells them about what Nada told him earlier about the Gaisorg armor. Bamba says Nada is no longer himself then.

Koh is relieved to hear that as that means Nada did not choose to attack them because he wanted to. But Bamba disagrees and says Nada chose to put on the armor out of his own free will just so he could obtain the power.

Canalo says they must defeat Nada then and he asks Melto if he agrees. Melto says Yes.

Just then, Ui happily arrives and brings everyone outside to show them a strange, beautiful music-playing thing floating in the sky above Tokyo. 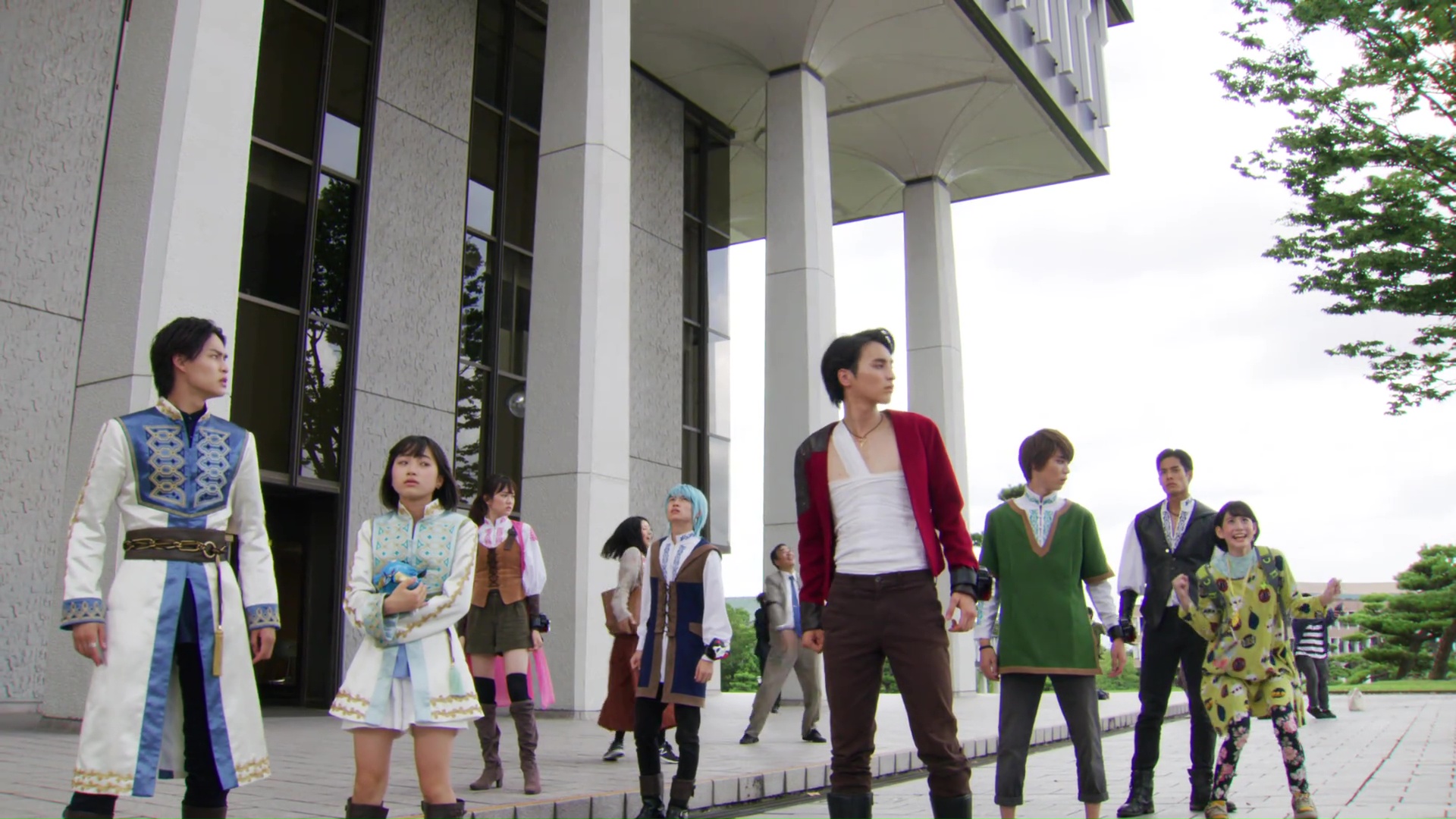 Everyone around them is dancing to the happy music. And soon, Towa, Melto, Asuna and even Bamba can’t help but dance as well.

Canalo and Oto are unaffected because of their water-adapted eardrums. But neither is Koh for some unknown reason.

Canalo tells Oto to hurry back home while he and Koh henshin.

Up on a rooftop, Waizuru explains that the music will make everyone happy and carefree so much that they won’t care they’re about to be killed.

Nothing Koh or Canalo throw at the Minosaur in the sky works. That’s when Koh has an idea.

They bring the others back home with them. Canalo uses NemuSoul to put the others, including Papa Naohisa, to sleep and stop them from dancing.

Koh and Canalo wonder if they can release the seal on Pii-tan so he can help them fight in the sky. Pii-tan says that’s a good idea, but he doesn’t know how to break the seal. Koh remembers the seal on their Kishiryu was broken when the temple was destroyed. So perhaps Pii-tan’s seal will be broken if he feels he is in danger.

Koh, Canalo, Oto bring Pii-tan to Dimevolcano and Pachygaroo who attack him with fire and punches. But neither breaks Pii-tan’s seal. Oto feels sorry for Pii-tan and tells them to stop it.

Suddenly, Gaisorg approaches. Koh tries calling to Nada, but Canalo says it’s no use. Nada can no longer hear him.

Canalo says the Minosaur is their priority right now, however. He henshins and faces off against Gaisorg.

Gaisorg swats Canalo away and sets his sights on Koh. Koh tries to reach out to Nada again, but it’s no use. Gaisorg shoves Koh away. But that seems to ignite something in him.

Koh rips his bandages off his body and screams. He henshins and battles Gaisorg.

On the other side of town, the Minosaur birther, a musician who has no money to rent out a studio, has all his minus feelings flow out of him. That embiggens the Minosaur even more, now able to plant itself into the ground and broadcast its music even louder.

Canalo makes sure Koh is okay. But Koh says he is able to keep his focus because of the pain from the wound Nada inflicted on him. That pain reminds Koh that he must save Nada from the armor’s curse and that he must defeat the Druidons.

A fired up Koh unleashes on Gaisorg.

On the other side of town, Oto continues to try and find a way to scare the seal off of Pii-tan. But Waizuru and Kureon appear. Waizuru shoots at Oto and Pii-tan, sending them over the side of the railing.

That seems to do the trick. The seal on Pii-tan is broken and he morphs into a brand new form, Pteradon, allowing him to save Oto and fly her to safety.

Pteradon lets Oto down so she can give Koh the new HieHieSoul.

Koh uses it and is able to uphenshin to HieHie Armor. That allows him a brand new line of attack against Gaisorg.

Pteradon, meanwhile, bombards the Minosaur with a freezing attack. That allows the others to wake up from their sleep and they hurry out.

Melto, Asuna, Towa and Bamba join Koh and they tell him to finish off the Minosaur while they deal with Gaisorg/Nada.

Koh flies off to meet with Pteradon so he can shift into YokuRyuOh. Koh uses HieHieSoul to uphenshin and also have Pteradon freeze Tokyo in an icy wonderland.

Melto, Asuna, Towa and Bamba use their belief in Koh to hold their own against Gaisorg. They get knocked back, but Towa stands and uphenshins to Tsuyo Armor. He charges at Gaisorg and for a moment, Nada emerges from the armor.

“Towa… I’m sorry…” Nada says before Gaisorg engulfs his body again. He attacks Towa and forces him to dehenshin.

A pain suddenly takes over Gaisorg and he runs off.

Back to Koh, he and YokuRyuOh are able to defeat the Minosaur with a Blizzard Claw Strike. The Minosaur’s defeat unfreezes Tokyo. 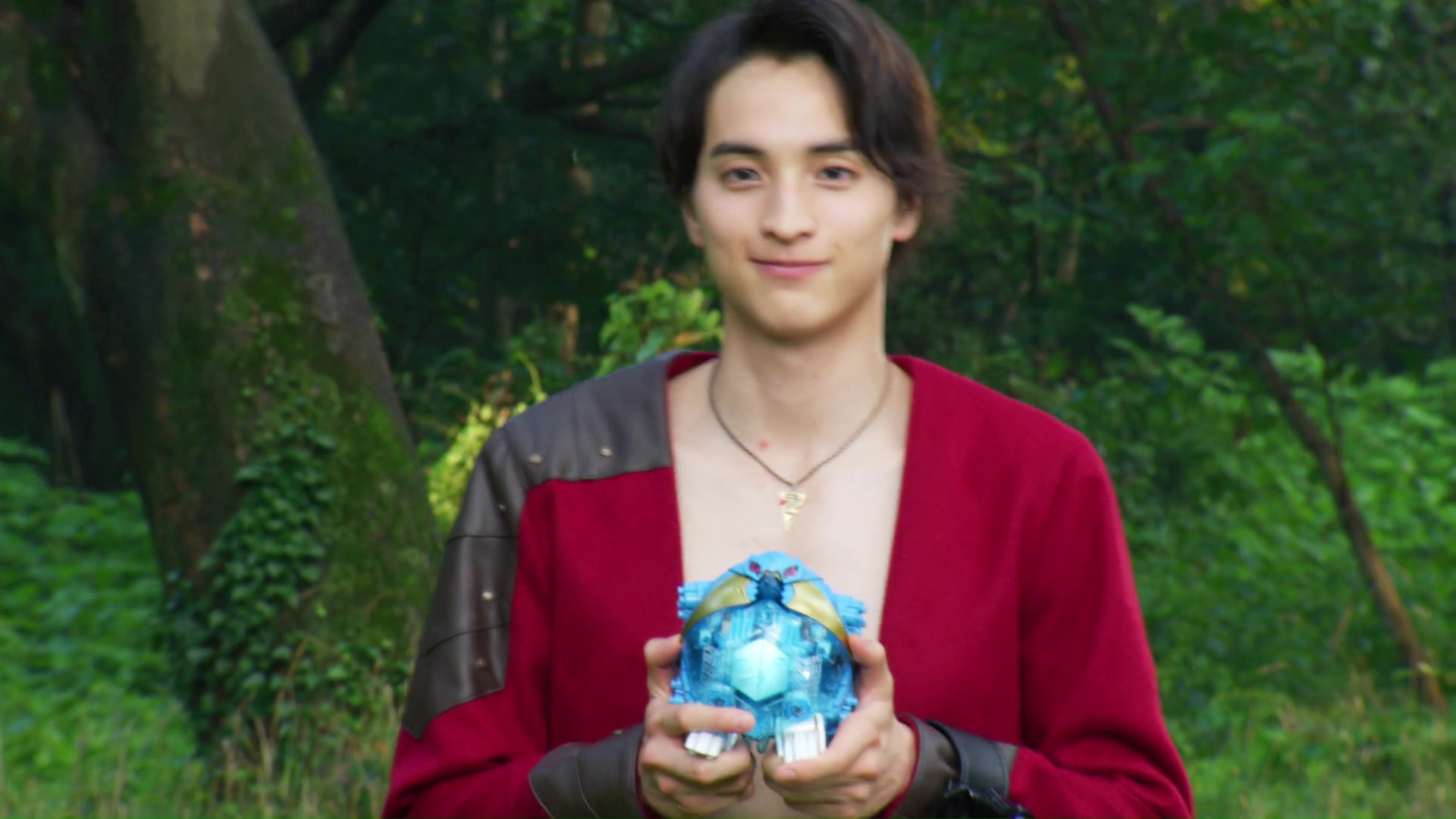 Koh and Pii-tan meet up with the others. 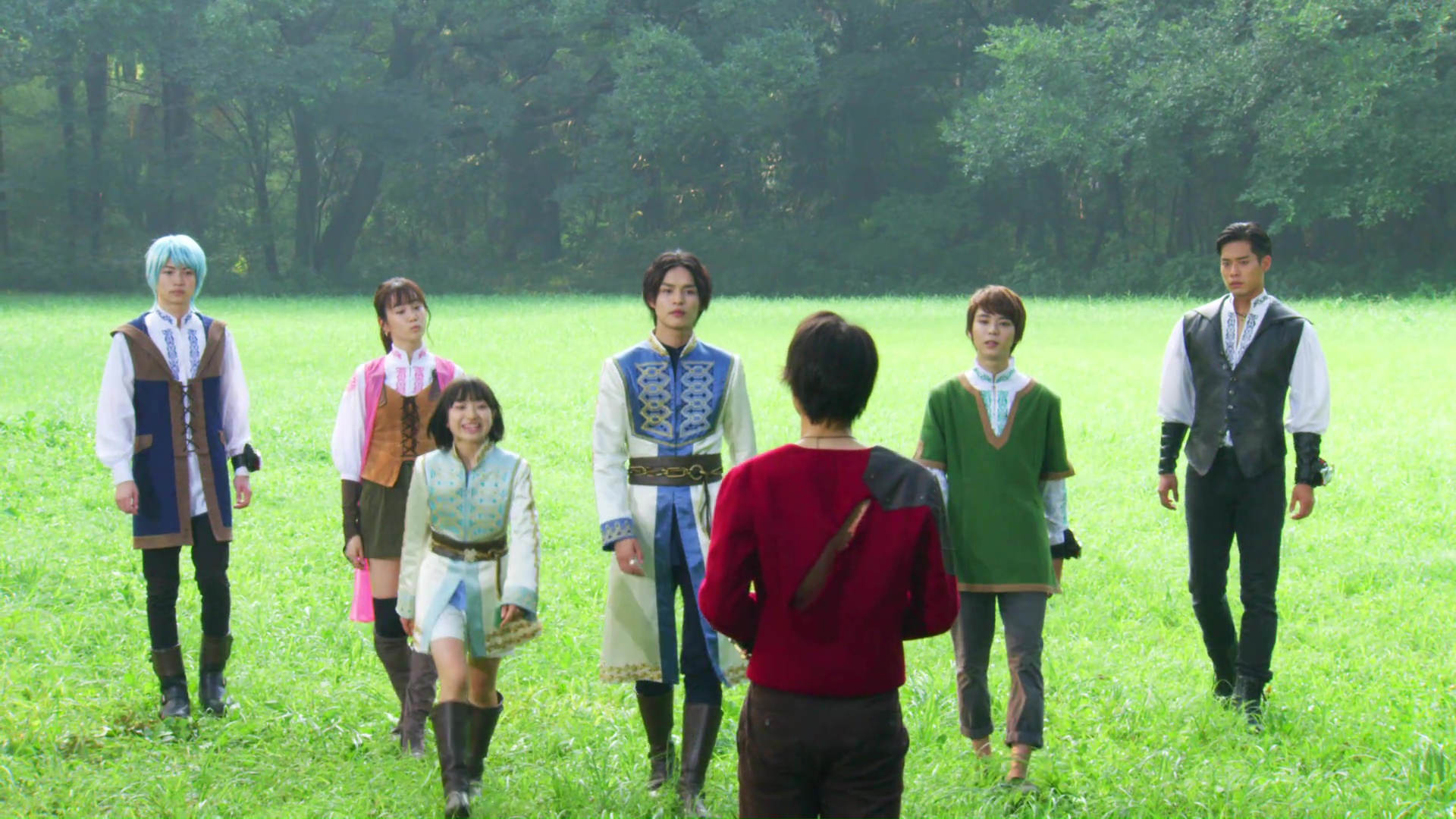 Pii-tan says his egg form is not bad.

Towa tells Koh that for a moment, Nada emerged from the armor. That may mean Gaisorg hasn’t fully taken over Nada yet. Koh is happy to hear that Nada hasn’t given up. So they shouldn’t give up either.

Koh vows they will save Nada.

My favorite part about it has to be the really beautiful fight choreography this episode, both in and out of suit. Great directing for those scenes as well. For example, that face-off between Bamba and Nada at the beginning was filled with great tension and urgency. The scene playing out without music in the background and just the grunts and emotion from the two guys really played up the dramatic moment and it set the tone of the episode.

Which is definitely interesting considering we got more than a few funny and comedic moments throughout the episode. This was an episode that placed the humor in spots that didn’t interrupt the flow of the main plot.

But the action was really great and dynamic. Quite the opposite of other certain toku shows that have bland and uninspired action sequences.

The battles in this episode were fun to watch. But each also had some nice character moments for pretty much everyone. Obviously at the beginning for Bamba. Then Koh’s shirtless scream before his rage-fueled attack on Gaisorg and continued belief in Nada. Melto and Asuna were the #TeamKoh cheerleaders throughout the episode, very much in-line with the bond we know of them three. Canalo facing off against Gachireus with the little moment of disappointment when Oto didn’t give the HieHieSoul to him was in character as well.

And the focus on Towa being the one that “gets” Nada. From the conversation last week with Nada to him being very observant of Nada’s actions this week, it’s a positive light on Towa’s skills and perception.

Like I mentioned last week, Nada’s story is good because he isn’t completely innocent. That is, he already had negative (minus?!) feelings in his heart which opens him up to Gaisorg’s control. Gaisorg manipulated and took advantage of that weakness. (Though that doesn’t totally mesh with what happened in Saikyo Battle regarding the armor?)

I assume we will get Nada realizing the error of his ways. And his “I really hate that about you” lines could refer to seeing how the Ryusoulgers are much better people than he is. That through their actions, he sees they truly are deserving of being Ryusoulgers. But of course, it won’t be too late for him and he’ll get the opportunity to change for the better after he can get rid of Gaisorg/break the curse.

If I were to nitpick about anything, it’s that the Druidons seem to be completely pointless lately. Waizuru and Kureon especially seem to have been relegated to comic relief status. Though I don’t mind their antics because they’re fun characters and both have strong foundations that the show can easily get back to. Especially Kureon.

I guess since we’re in this Nada/Gaisorg arc, the Druidons take a step back for now. But it just reminds me how the endgame for the season still seems to be up in the air.

Regardless, I’m enjoying everything. Ryusoulger has been the kind of lighthearted fun with bouts of sincerely great dramatic story that I feel was missing with LuPat last year. And this episode might have been a good example of that good balance in story matched with great direction.