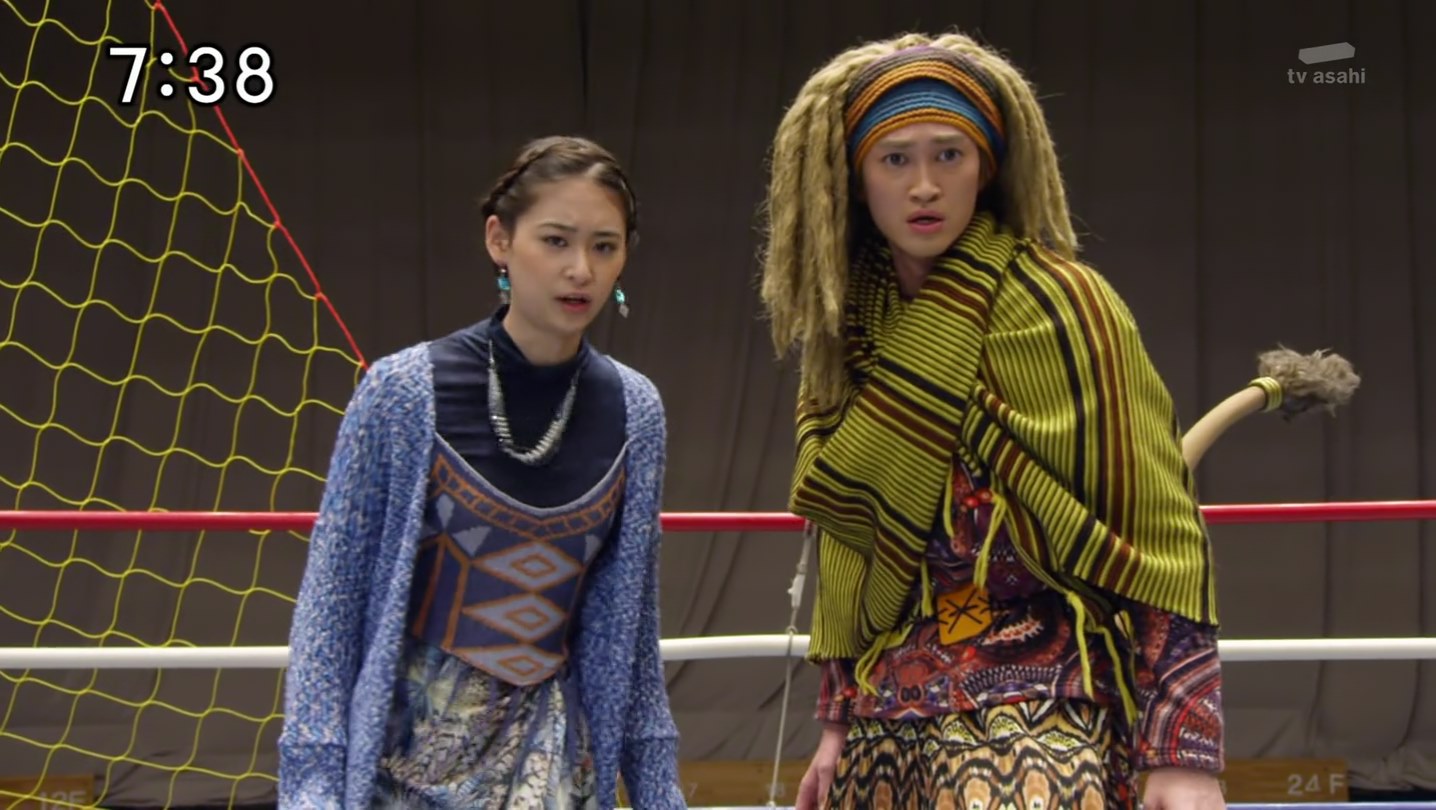 Uncle Mario has asked Amu and Sela to go shopping and Leo has decided to follow them. Tusk tells Yamato that Leo’s got a thing for the ladies.

Leo offers to take their bags. Amu is happy to let him carry them, but Sela says she doesn’t need such help.

Their tails suddenly stiffen as a player from Team Kubaru, Amigard, is overseeing his Battle Show in which he has two friends or loved ones fight each other. The winner is free to leave the Battle Show, but will have to live with the fact that the loser will get thrown into space until they die.

Amu, Sela and Leo arrive and henshin. They get the people out of the nets, but Sela and Leo end up getting trapped by Amigard. Amigard takes them away to a boxing ring and also takes the King’s Marks.

Amigard orders them to fight, otherwise, they can’t leave the ring. If they do, at least one of them can be saved. Leo appears ready to fight and they do. 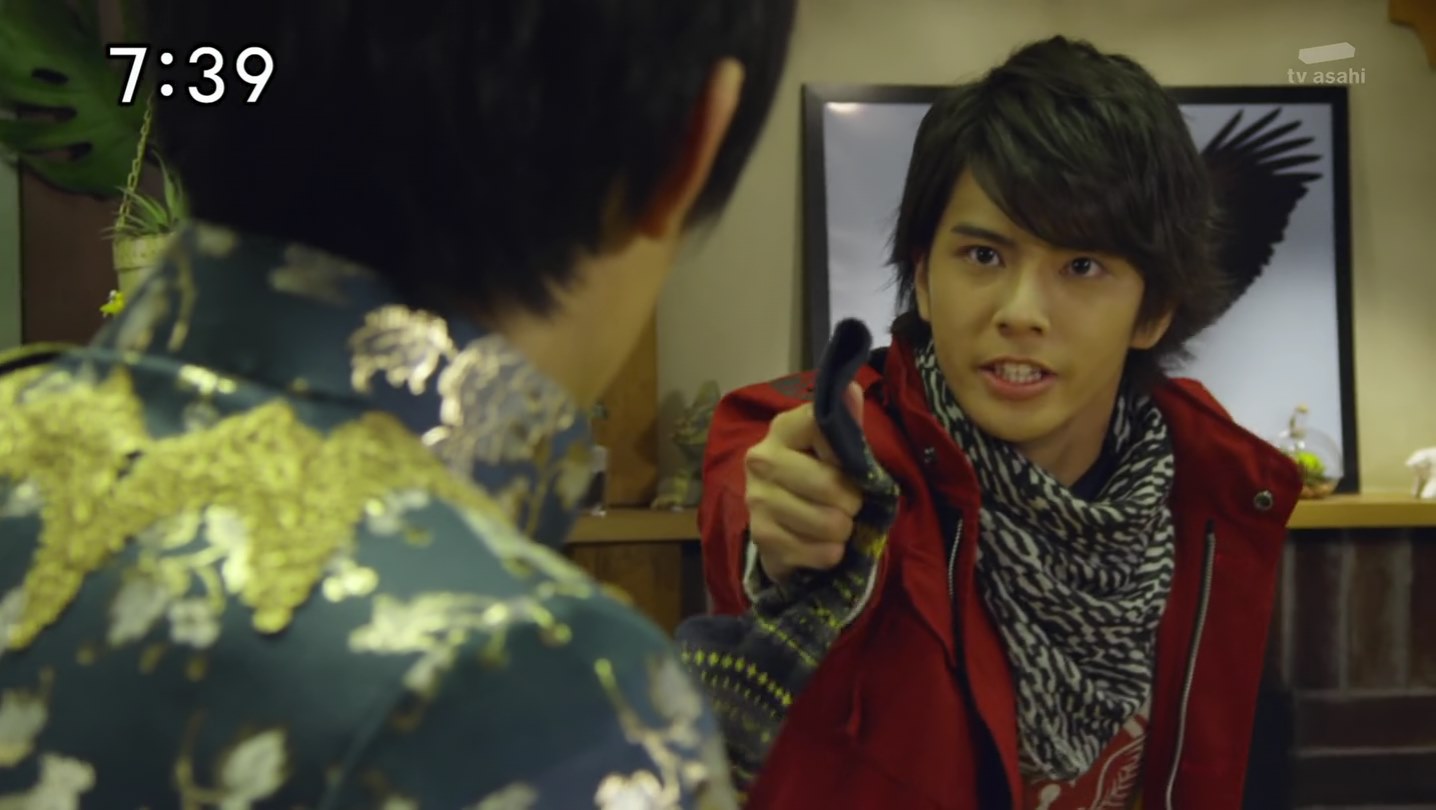 Yamato flies around, but even with his super sight, Sela and Leo are nowhere to be found. But he gets an idea. They hurry back to the treehouse.

Yamato asks Tusk to sniff Leo’s sock and use his super smell to track Leo and Sela. Tusk doesn’t want to. Amu asks if he would prefer smelling Sela’s things. Yamato says there’s many reasons why that would be a problem.

Tusk decides to just smell Leo’s stinky sock then, but Uncle Mario comes into the room and is not really sure how to react to what he’s seeing.

Leo and Sela are battling in the ring. Leo seems very intent on beating her, but Sela sees right through him. He’s holding back. Indeed, Leo admits that he would never want to fight a woman. Men should protect women.

Sela says she’s always hated that about him. She recounts the time he let her win their match at the martial arts tournament. She never felt good about that win knowing Leo held back.

Amigard zaps them and forces them to resume fighting or else they will both get shipped off into space.

Sela tells Leo he better fight her fair and square. They both go Zyuman. Sela cuts Leo’s face. Ginis loves the show. The sight of conflict and distress really turns him on.

Yamato, Tusk and Amu arrive just as Leo and Sela are about to deliver big blows. They henshin and free them from the electrified ring. Yamato manages to take Leo and Sela’s cubes back and he tosses them over.

Yamato says Leo and Sela can sit this one out, but Sela says she’s pissed and won’t be satisfied until she kicks Amgiard’s ass.

The Zyuohgers take care of the newly summoned Moeba while Leo and Sela team up to take on Amigard. The others help finish off his first life. Naria drops a Continue into Amigard and he embiggens.

The Zyuohgers hop into their cubes and Yamato, Leo and Sela form ZyuohKing.

Amigard catches Tusk and Amu in a net, but Yamato summons Cube Kirin who slurps up the net and frees them. Yamato then uses Kirin Bazooka and they take care of Amigard for good.

Back at the treehouse, Tusk is getting the laundry ready, but Uncle Mario still thinks he’s some kind of sock-smelling freak.

Sela confronts Leo about their fight earlier. She knows he was going to take her punch if the others hadn’t come to save them. Instead of answering her, Leo decides to do the laundry himself. Sela vows to fight Leo for real someday.

Outside, Leo tells himself that he’d rather Sela hate him than be forced to beat her up. There’s nothing cool about fighting a girl. That’s how a man should be.

Elsewhere in the forest… Mr. Gorilla?

First off, the idea of pitting friends against each other is definitely dark. Though, the Blood Game is pretty morbid to begin with. It really seems to be like The Most Dangerous Game. Making a game of people killing each other or people dying. It’s entertainment for the Deathgaliens. I mean, Ginis gets turned on by pain and suffering. How twisted is that?!

Almost as twisted… The sniffing socks and other garments and the implication of it was a strange gag to include. It was definitely more awkward than funny. Like, really Uncle Mario? That’s the first thing you assume? Tusk wasn’t even holding the sock close to his nose. It’s not like he was stuffing his face with other people’s clothes.

I think there was some women’s empowerment message in this episode somewhere. But I think it was lost in the strange innuendo. Plus, the episode played out more like it was setting up a Leo-Sela romance than to show how Sela wants to be a strong, independent woman.

There’s definitely good character stories in Sela learning that she can accept other’s help while still be a strong woman and in Leo being a gentleman while still acknowledging girls and women don’t need to be babied, etc. But the episode didn’t really do a good job of parlaying those points to us the audience.

A great part of this episode though was hearing that new song during the morphed fight sequence outside the arena. Sounds like a great song.

Overall, I think this might have been the weakest episode of the four so far. Not bad, just a little awkward in its overall execution of whatever it was they were trying to do with it.