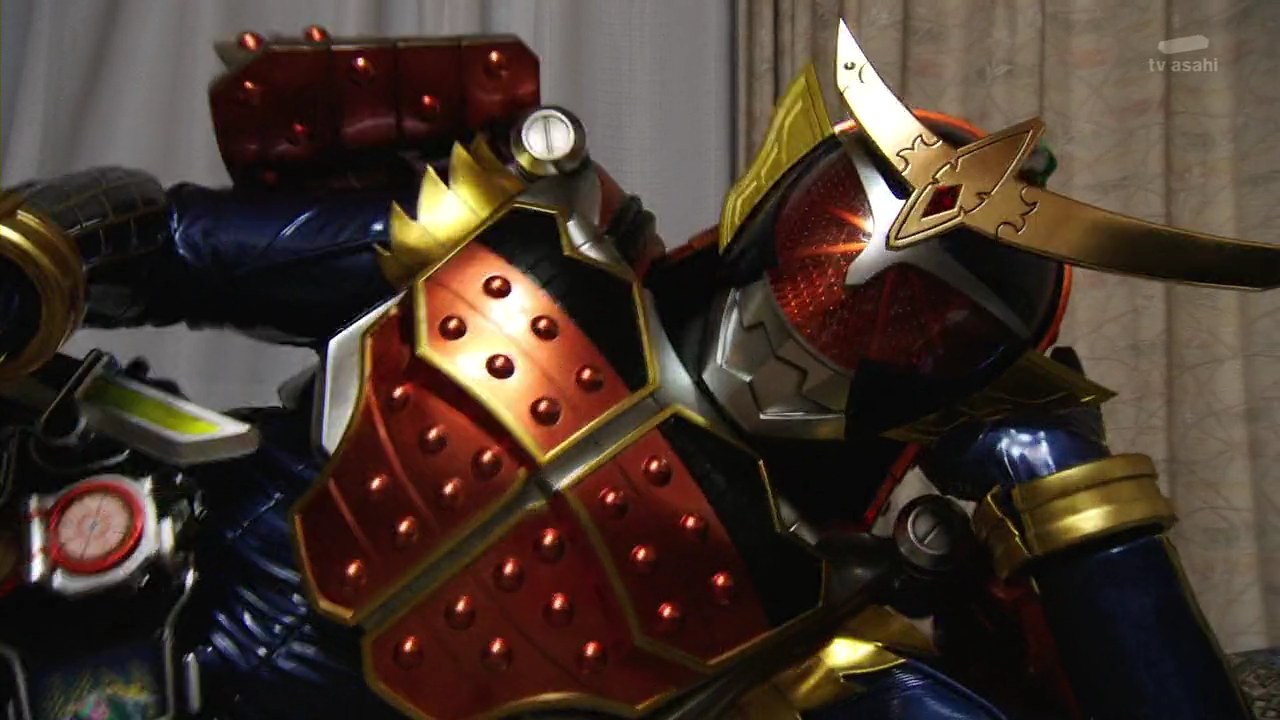 A group of Yggdrasill Corp employees are investigating the strange fruits and Lockseeds in the colorful forest when they are suddenly attacked by a few Inves. A melon looking Rider appears to save them.

Meanwhile, Kota excitedly heads home and tells his sister that he’s transformed. He goes into his room and henshins. Akira hurries over to see what all the strange sounds and lights are about and opens the door to see Kota in full suit.

She smiles uncomfortably and leaves him to whatever he was doing.

Kota plays around with the Lockseed and driver, thinking of different ways he could activate the henshin. He wonders what he could actually do with it though.

Next day, he goes to work at the Indian restaurant and decides to henshin to make his first delivery of the day. He tries to get on his scooter, but he’s too big and falls over as bystanders watch.

At his construction job, Kota decides to henshin again to take the cans of paint up the scaffolding, but it only causing more trouble.

On his way home, he comes across a crying little boy stuck in a tree. He decides to henshin, but can’t find the Lockseed buckled to his butt.

Kaito comes along and has a different approach at getting the boy down, telling him to either keep crying and stay up there or buck up and jump down. The boy decides to jump down and Kaito catches him. 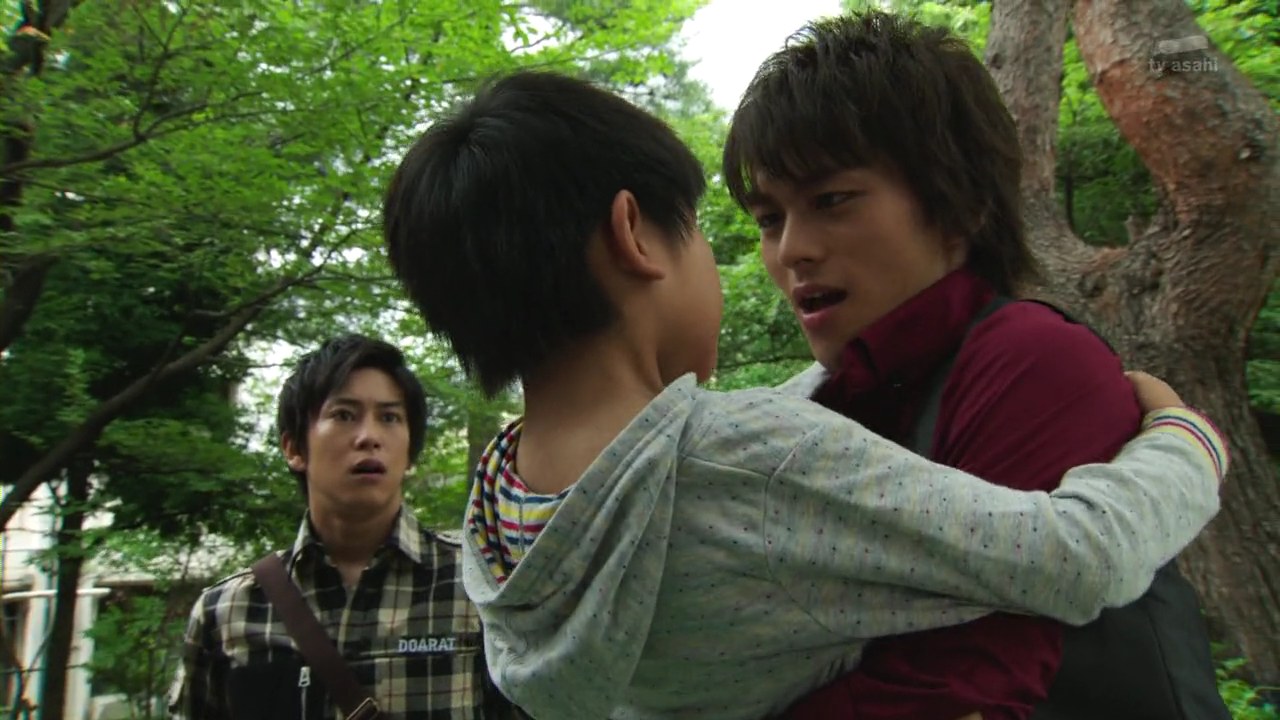 He tells the boy to remember that he can only rely on his own strength.

Kaito walks away and Kota heads home when Mai calls him asking if he knows where Yuya might be. He hasn’t returned home or appeared at the Gaim garage since yesterday. 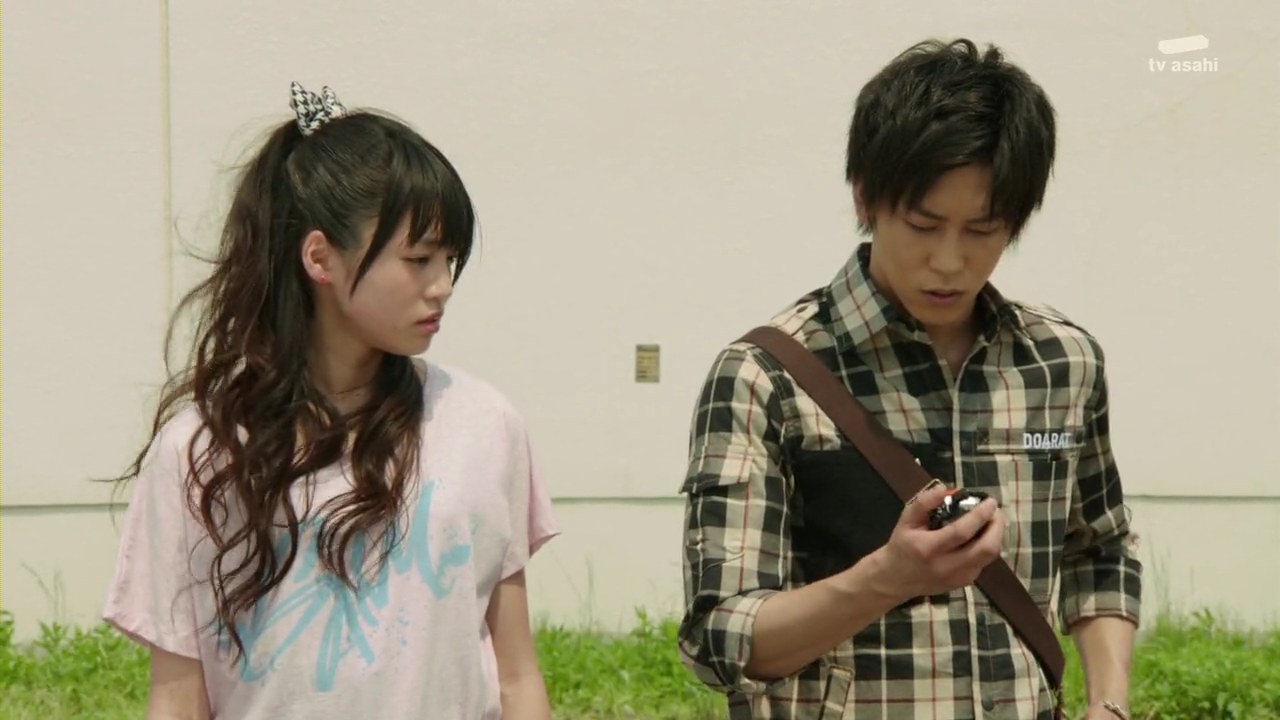 They meet up and head to where they found the zipper opening to the forest, but it’s gone now, including the fauna that had grown outside of it too. Mai is worried Yuya might be trapped in the forest, but Kota says Yuya is strong enough to take care of himself.

Mai says the team needs Yuya and remembers the belt thingy from yesterday that Yuya promised would help them. She asks Kota to hand it over, but when she tries to attach it to her waist, nothing happens. 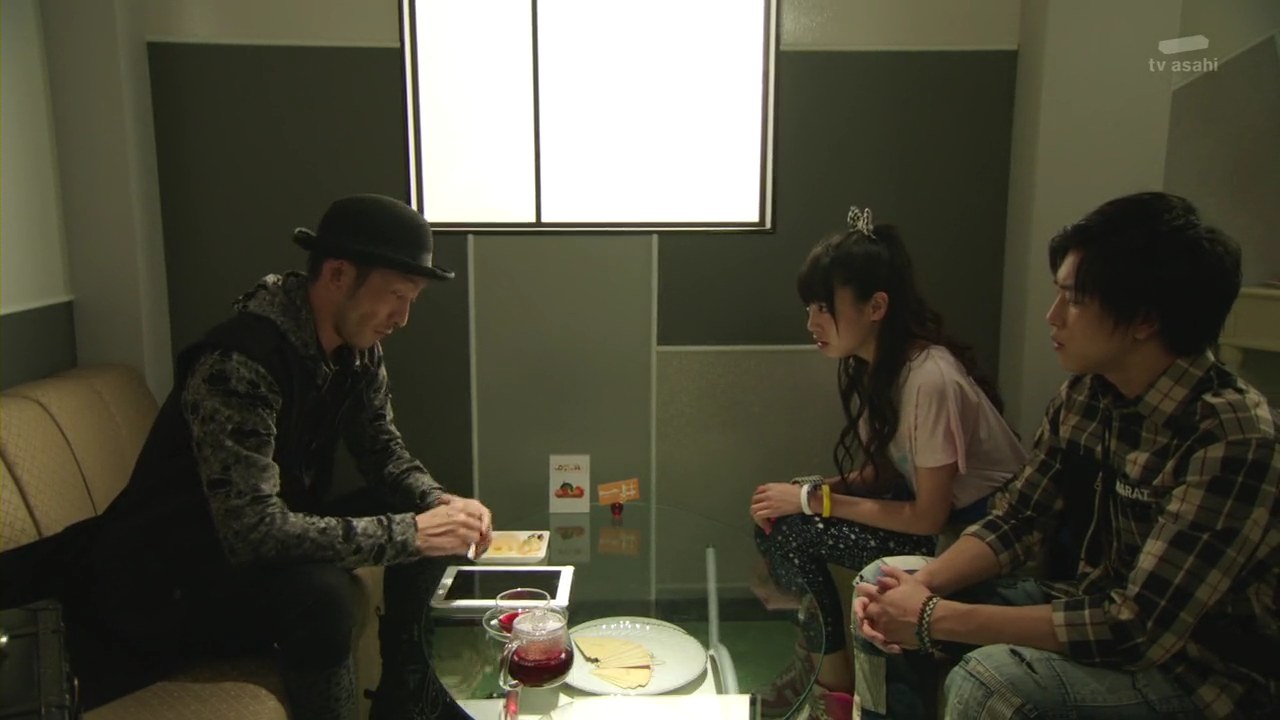 They decide to go ask Sid who says the belt is the Sengoku Driver and it can only be used by the first person that puts it on. Sid offers to sell them some Lockseeds to help in their battle against Team Baron. But they cannot afford any of the top of the line Lockseeds needed to beat the ones Team Baron have.

Across town at the stage, Team Baron is performing for the crowd when Team Raid Wild appears, headed by leader Ryoji. 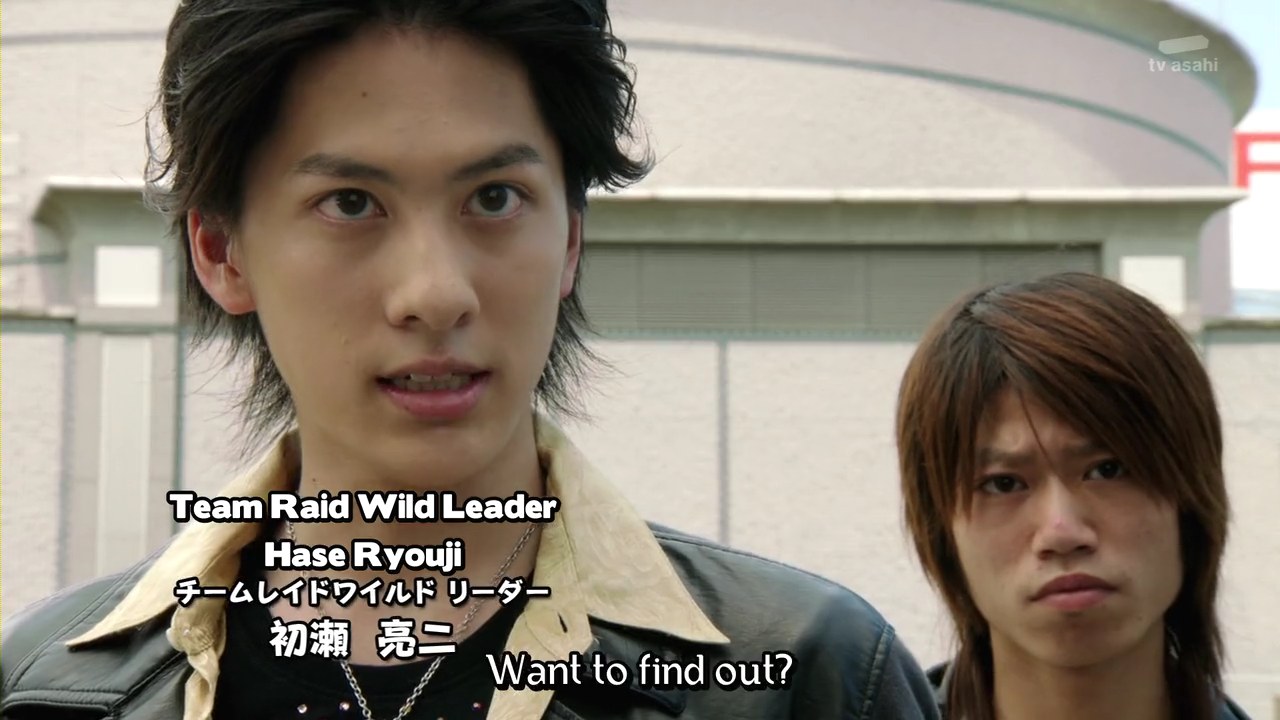 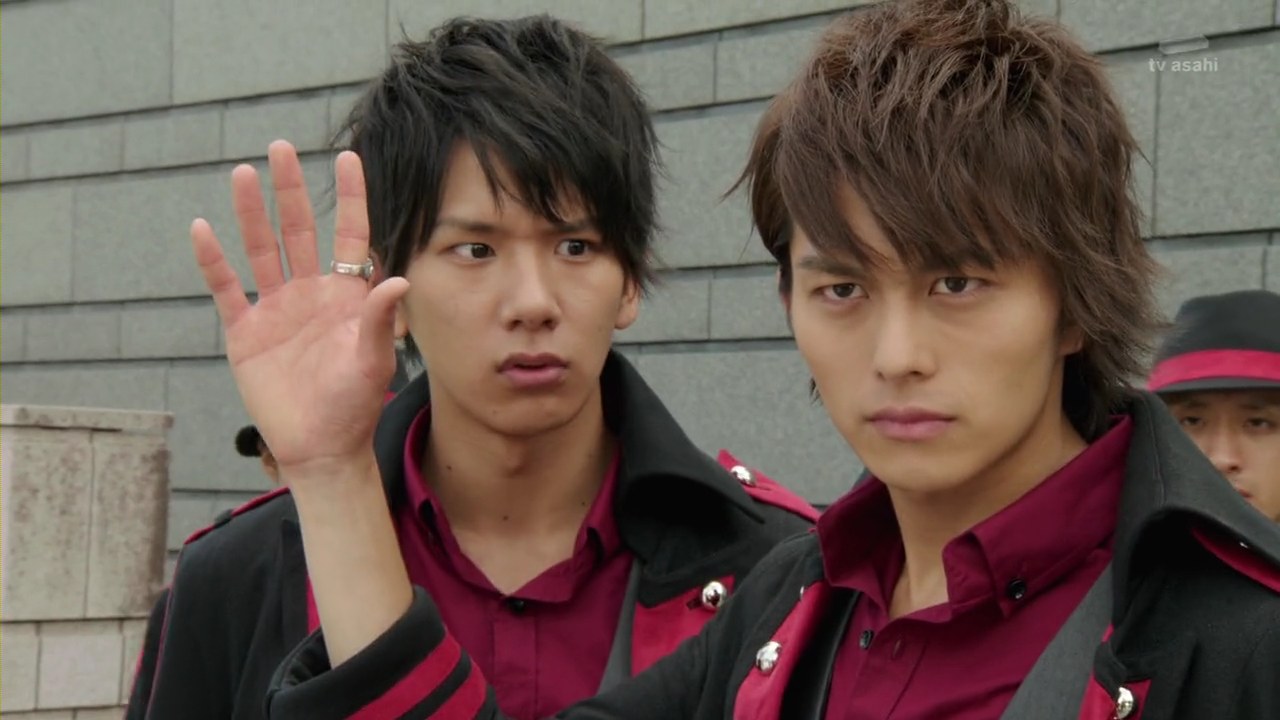 Ryoji asks Kaito to let them have the stage and they decide to duel for it. Ryoji gets his Inves ready while Kaito gets his three Inves ready. Needless to say, the three beat the one. 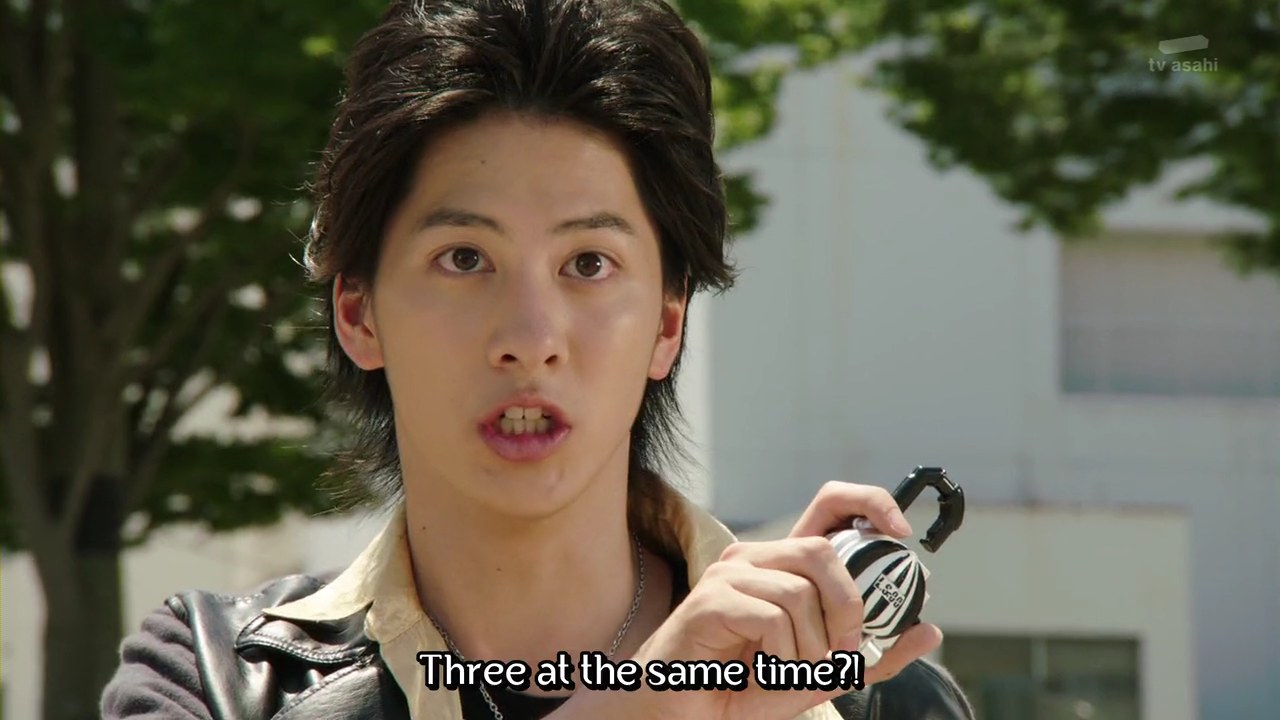 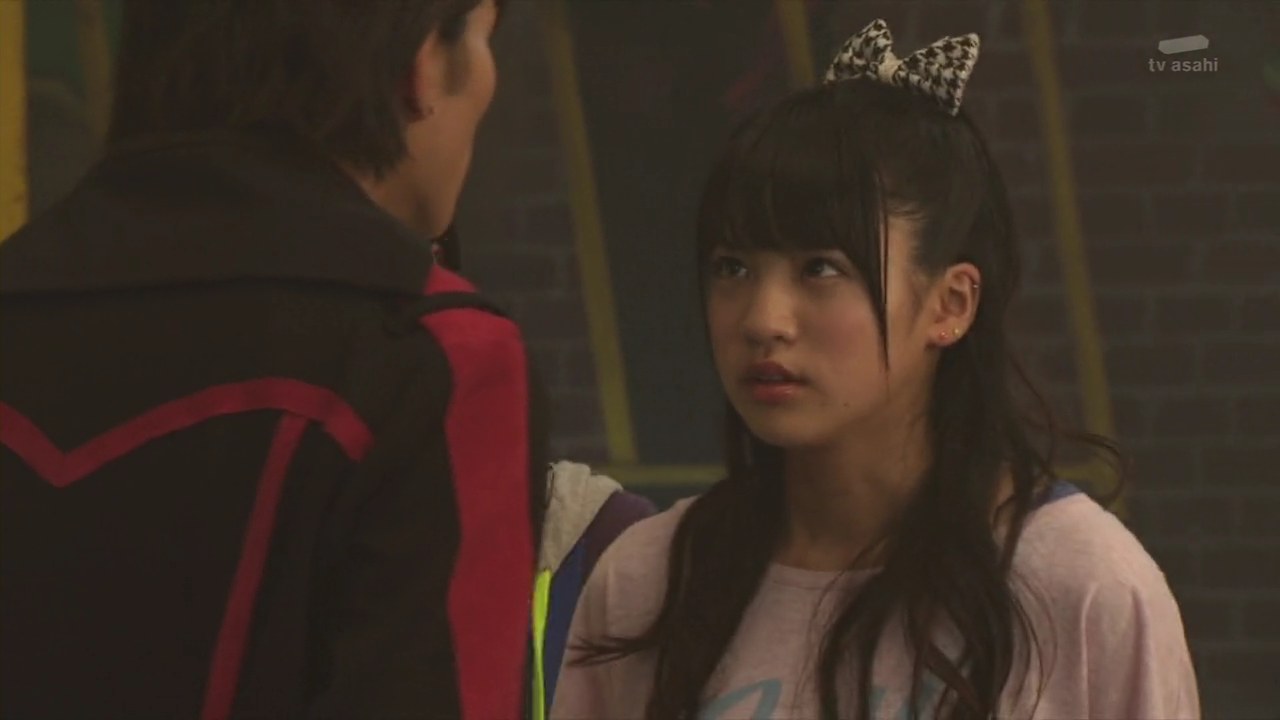 Later, Mitch calls Kota and asks for help as Team Baron is at their garage demanding their Player Pass. Mai is standing up to Kaito who wants them to duel. Team Gaim wins, they get the West Stage back and a Class A Lockseed.

Kaito calls them weak and loser dogs just as Kota hurries in and shows them his own Class A Lockseed, one of the two he pulled at the forest.

They all head outside for the duel. Kaito adds that if Team Gaim loses, they hand over their Player Pass and must disband. Zack nods to Peco to do their usual plan to ensure Team Baron’s victory.

Kaito unlocks his three Inves, but everyone is shocked when Kota unleashes his Inves… a very large Inves.

Kota’s Inves easily and quickly wins the duel, but Peco still knocks the Lockseed out of his hand, causing the Inves to escape the virtual ring and start attacking the onlookers.

“What the hell are you doing?” Kaito asks Peco, “Are you trying to make me look like a fool?”

Kaito decides this is exactly what he needs to use the Sengoku Driver. He takes it out, unlocks his Lockseed and henshins as everyone watches in awe.

The Inves picks the Lockseed up off the ground, sticks it in its face and embiggens.

Kota bravely faces it head-on, but gets knocked around and drops his sword. Kaito picks it up and charges over, but the Inves also knocks him off to the side. 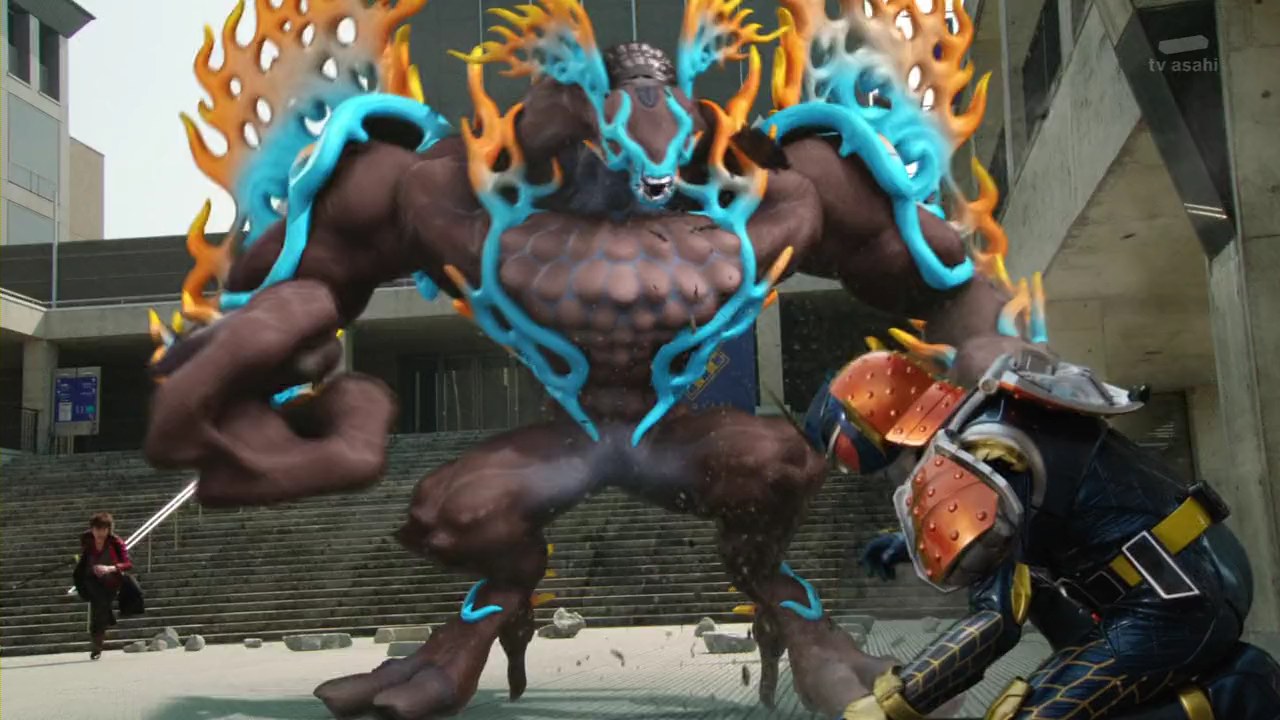 As the Inves continues to rage, Kota pushes the knife on the Driver down three times and his orange armor folds back up to cover his head inside the big orange to launch into an attack. 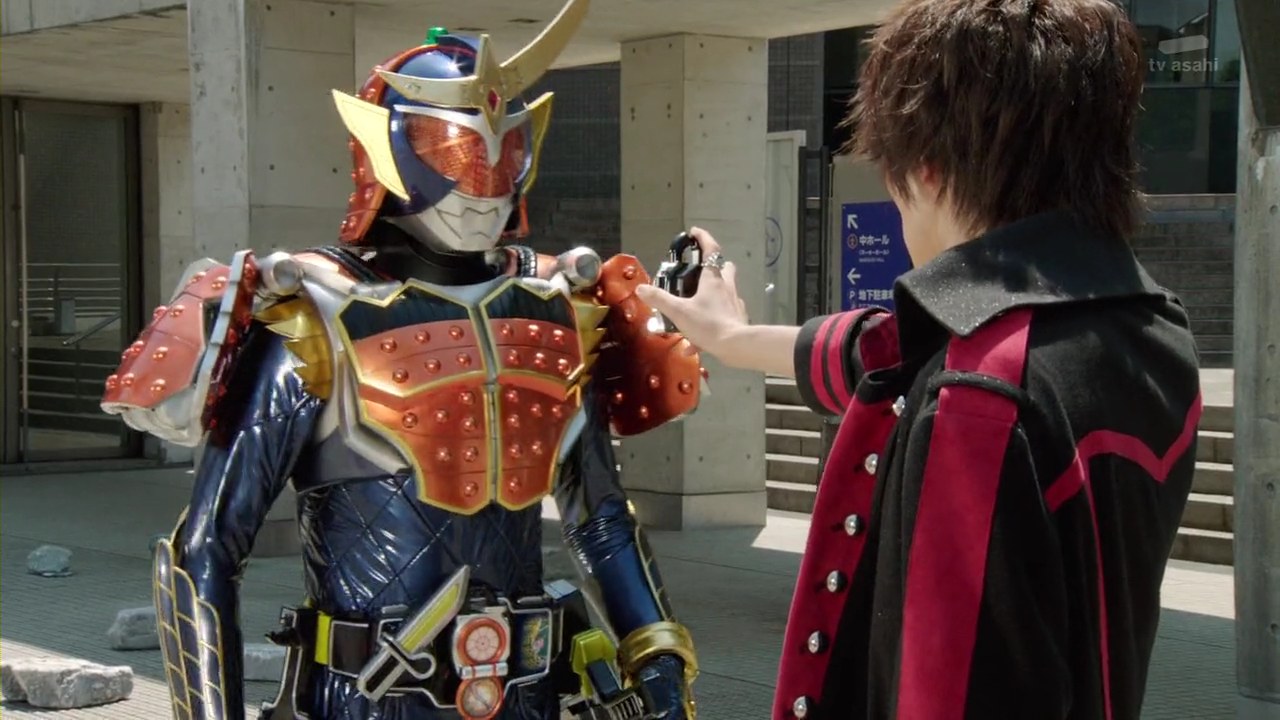 Kota then asks Kaito for the Lockseed he had promised since Kota did win the duel. Kaito begrudgingly hands it over and once Kota sets it into the Driver, the Orange Arms disappear and are replaced with Pine Arms. 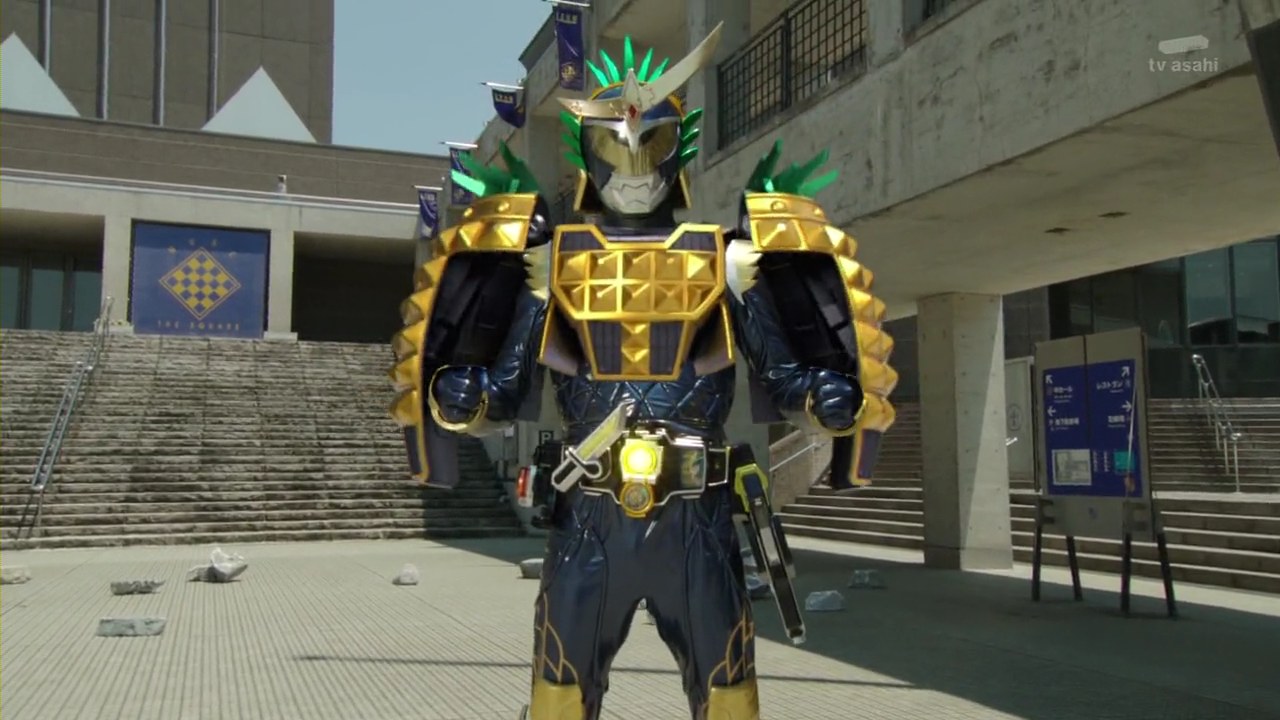 Kota uses the included Pine Iron by pressing down on the knife once and kicking it over to attach onto the Inves’ head allowing him to do a Rider Kick to finish it off.

Team Gaim goes over to congratulate Kota while Kaito wonders just who the hell he is.

The annoying DJ shows up as he broadcasts footage of the battle on his show.

Watching the broadcast is Takatora Kureshima, an official of Yggdrasill Corp and apparently the owner of a certain Class A Lockseed.

“Things are proceeding as planned.”

Episode Thoughts
I definitely got some Sentai/Power Rangers vibes from this episode. And the other Riders haven’t even really shown up yet.

But the whole teens and dance crew angle really gives the show a youthful energy. I know reaction so far to the season is mixed, but I am liking it. Again, Fourze was a fun, satirical take on high school. Here on Gaim, it feels very much like a young idol drama. And the casting of all these idol performers by Toei finally comes in handy since it seems we’ll be seeing plenty of dancing.

The fruit concept seemed odd when first announced, but so far, it seems very novel and amusing and not in a bad way. Kota’s messing around with the driver also adds a sort of whimsy and fun that we haven’t seen much elsewhere (or I haven’t seen much). I liked that scene of Kota henshining in front of everyone with their shocked faces.

I am looking forward to the different “factions” when it comes to Riders since that’s something I’ve wanted to see on Sentai for the longest time.

So, I might be in the minority, but I’m thoroughly enjoying Gaim so far.