While the Rangers try to grasp Evox now having three MegaTransporters, Nate finds Roxy’s StasisPod life system has been corrupted. That means if Roxy doesn’t wake up soon, she dies. Zoey reminds them all they have to do is destroy Roxy’s avatar.

They want to rush out to kill avatarRoxy. But Commander Shaw reminds her son not to let his emotions cloud his judgment. They must first focus on figuring out what Evox is planning with the Transporters.

Devon, meanwhile, is at his father’s reelection rally. Commander Shaw tries contacting him, but the Mayor is in the middle of a speech.

The Burke Sibs somehow stumble upon a van with the Transporters. But they have to speed off on their bikes when it is full of Tronics. The Tronics chase after them and they all end up at the Mayor’s rally where they shoot into the crowd. 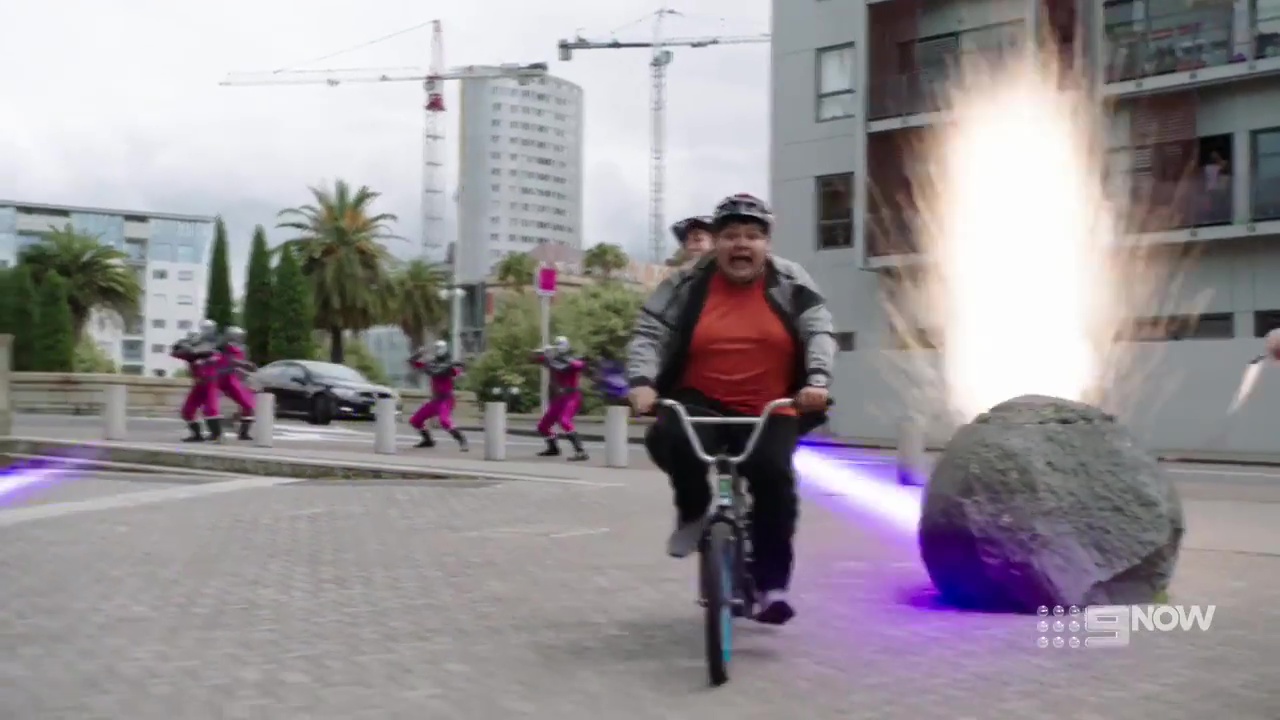 The people run to safety. The Mayor’s assistant says he must get to safety as well, but the Mayor says just like the Power Rangers, they can’t leave until they are sure everyone is alright.

Devon runs off so he can morph, but the Mayor, not knowing why, cannot believe his son could be such a coward. Devon meets up with the others as they take care of the Tronics hounding the Burkes. The Sibs point the Rangers toward the van full of Transporters. 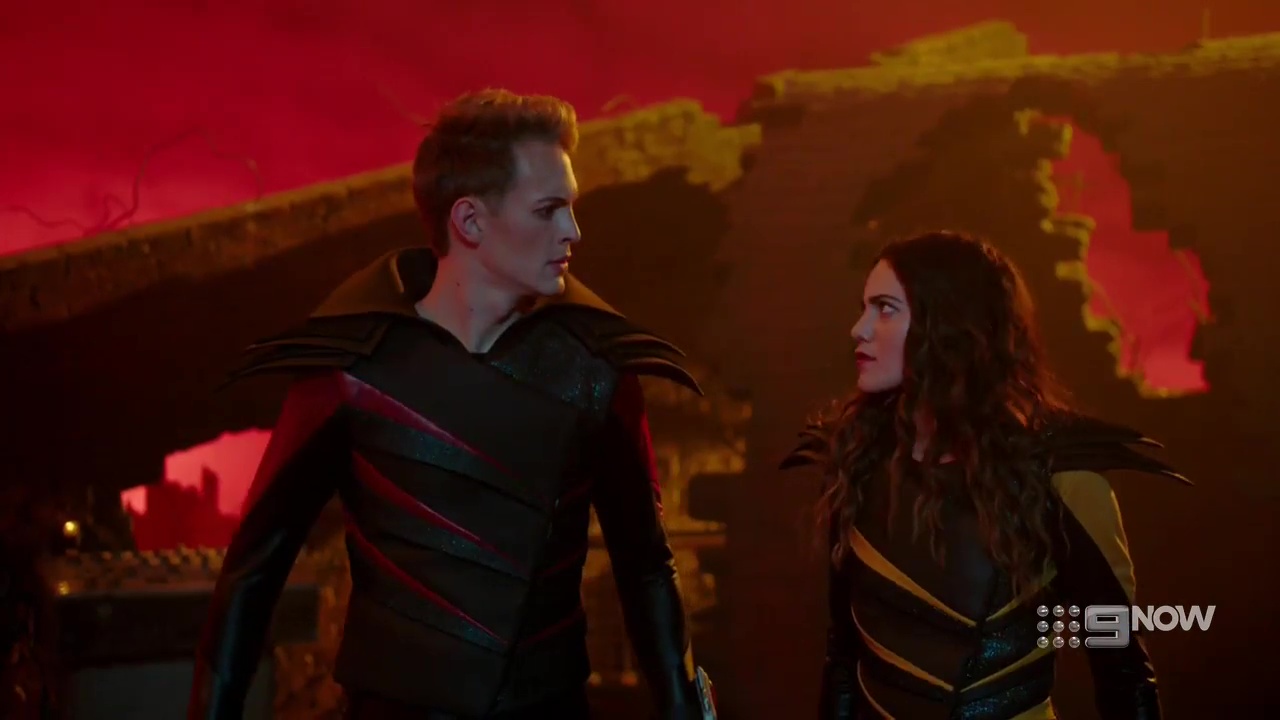 Blaze and Roxy order Scrozzle to transport the Morph-X Tower to the Cyber Dimension already. But Scrozzle says that is impossible when the Transporters are sitting in a van and about to be taken back by the Rangers.

Blaze orders Scrozzle to send in a Gigadrone to distract the Rangers.

The Rangers are able to secure the Transporters. Ravi asks his mother for an update and she says Roxy’s condition is deteriorating. She tells Ravi his #1 priority right now though is to return the Transporters while the others deal with the incoming Gigadrone. 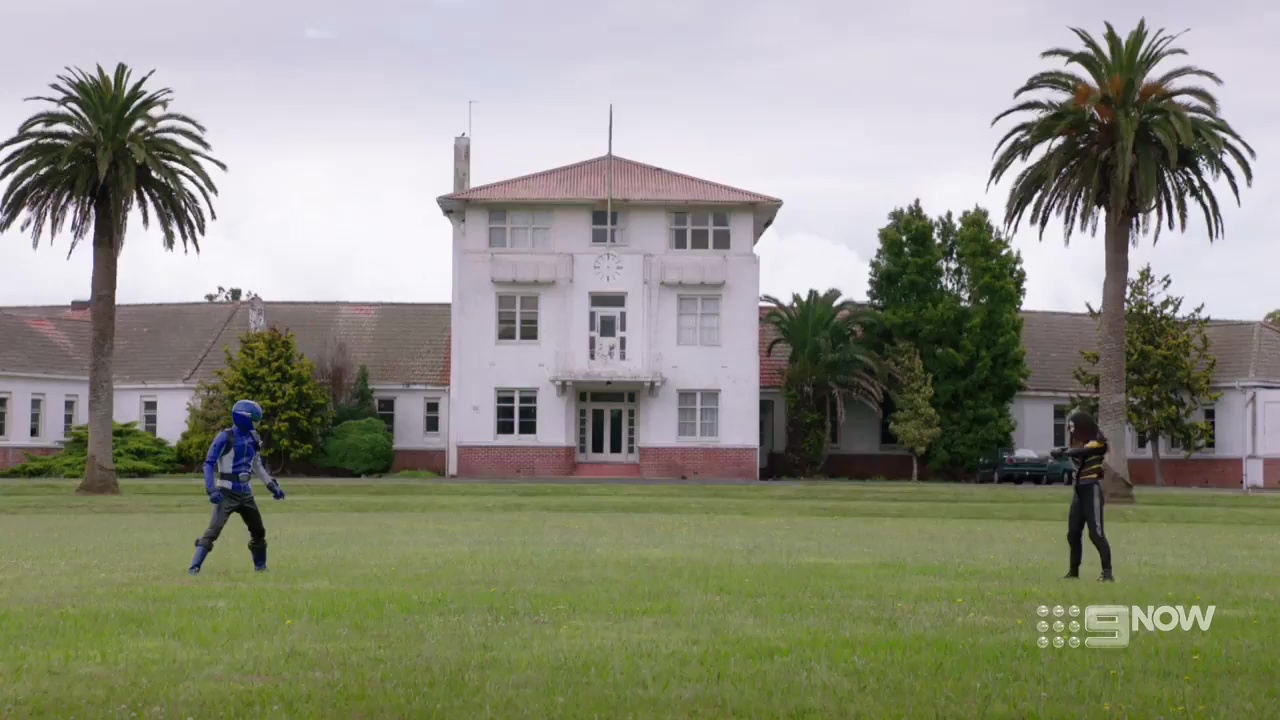 Roxy has a plan to distract Ravi. She tries to lure him away from the Transporters. Ravi remembers his mother warning him not to stop for anything. But Ravi decides to chase after Roxy so he can destroy her for good.

Roxy morphs and she and Ravi battle. The others hop in their zords to take care of the Gigadrone.

The sprinklers turn on, cooling Ravi down.

Ravi is relieved that Roxy is saved. But Blaze has gotten behind the wheel of the van and has driven away with the Transporters. He reports back to Evox who is upset that Roxy has been destroyed. But Blaze ensures him that the Morph-X Tower will be transported.

Ravi hurries back to GBHQ, but the real Roxy still hasn’t awakened and her condition continues to worsen.

Commander Shaw demands Ravi face her. She reprimands him for disobeying her order and putting the entire city in danger. Ravi says he will accept responsibility if the entire city is killed by Evox. 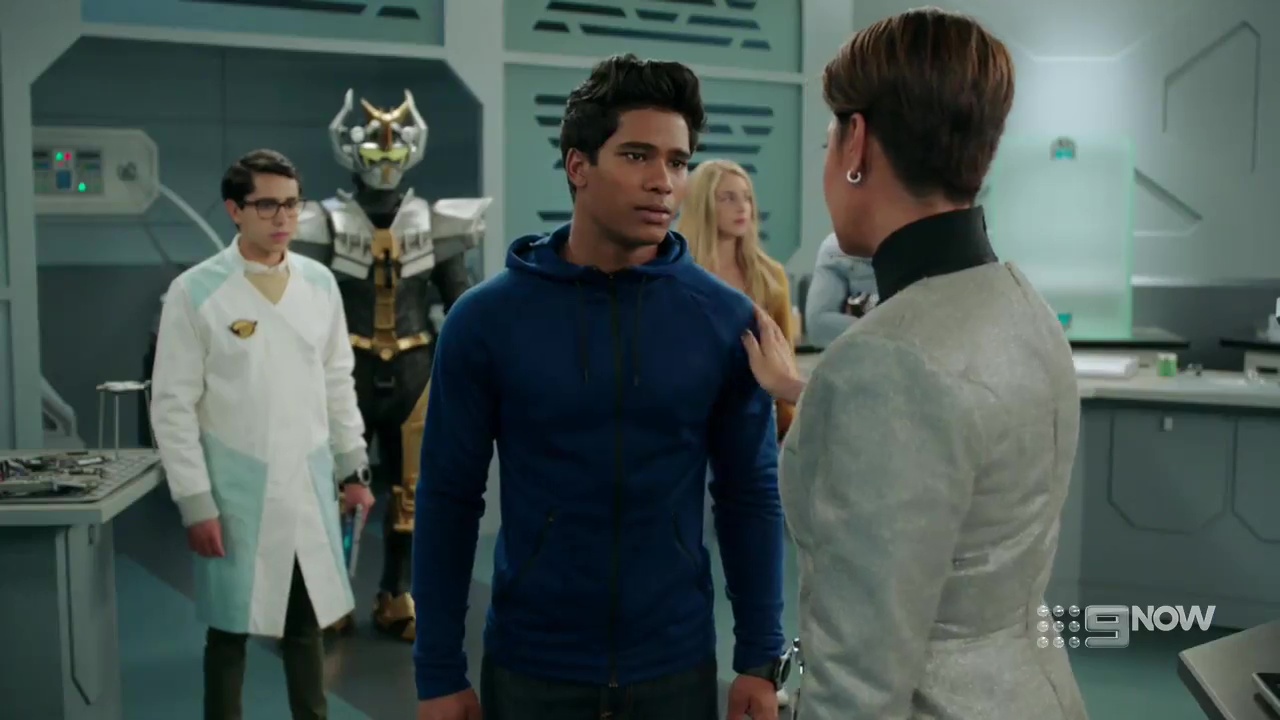 Commander Shaw comforts her son and says she is sorry about Roxy.

Just then, the Burke Sibs call in to say they’ve found one of the Transporters. The Rangers hurry out and they realize Evox’s target is the Tower.

Mayor Daniels calls Devon over and scolds him for running off. He believes Devon is a complete bum. 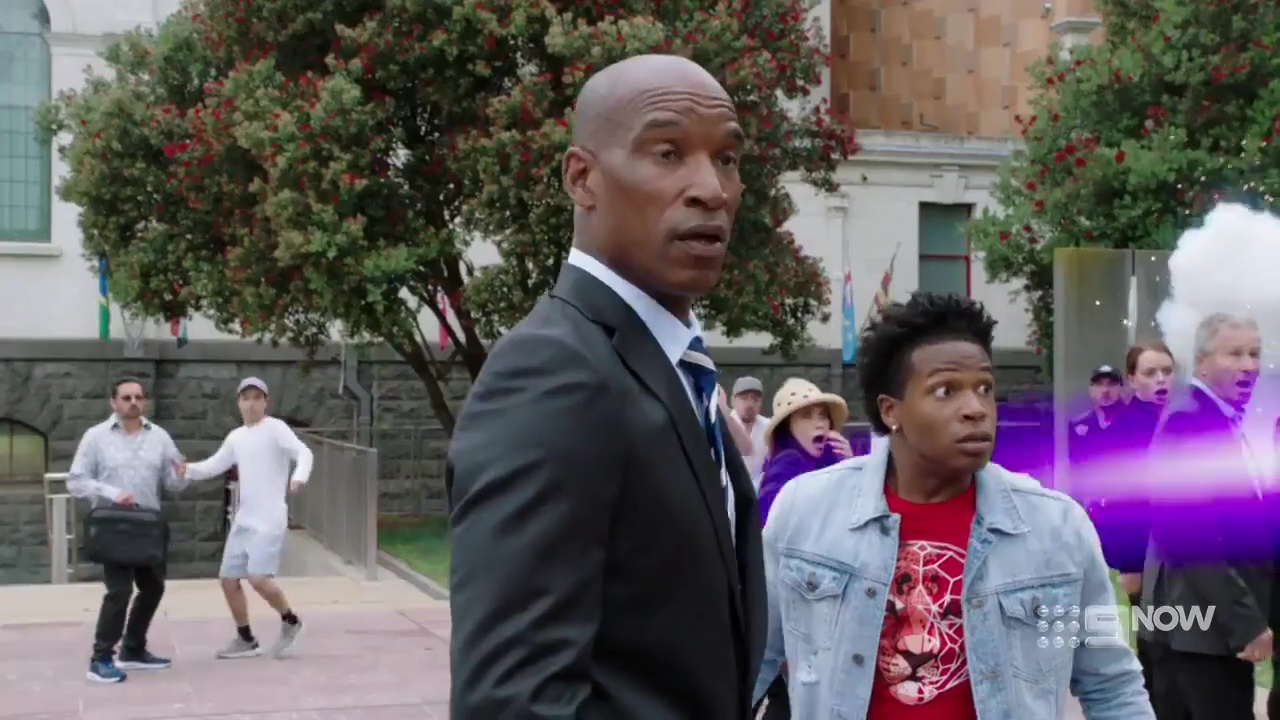 Blaze appears with an army of Tronics. Devon, Ravi, Zoey and Steel fight off a group of Tronics while Nate tells the Burke Sibs to ensure the Transporter is returned to GBHQ.

Mayor Daniels sees Tronics surrounding Ben and Betty so he goes to help them by fighting off some Tronics. Betty hops into a shopping cart with the Transporter and Ben pushes. Betty uses groceries in the cart to fight off the Tronics along the way.

The Rangers morph and take on the Tronics.

Blaze activates the two Transporters. Ben and Betty load their Transporter into a GB SUV, but don’t close the hatch. That allows Blaze to just take the Transporter and reposition it. Before he can activate it though, Devon kicks him and they battle.

Mayor Daniels comes running and hides behind a tree to watch the chaos. Blaze has Devon all tied up and forces him to demorph. Mayor Daniels is shocked.

Blaze is able to activate the final Transporter and the Morph-X Tower, along with Blaze and Devon, are transported to the Cyber Dimension. 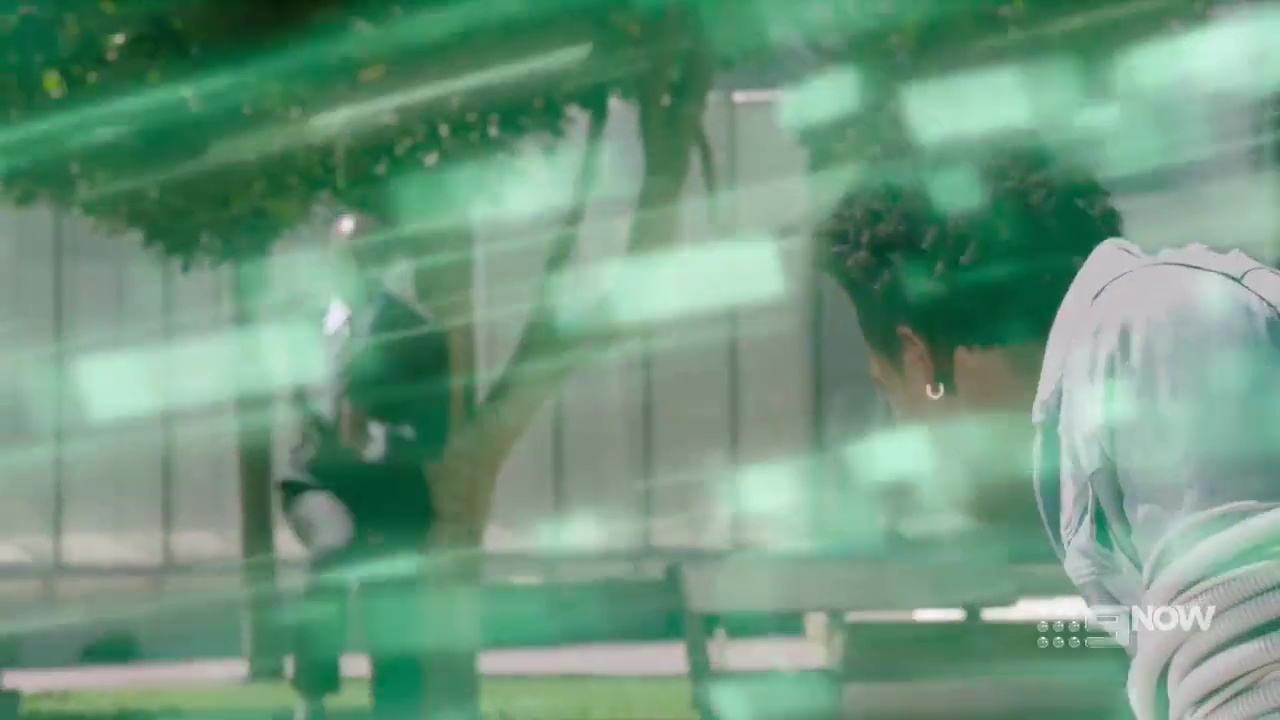 Mayor Daniels runs to his son, but it’s too late.

The Rangers head back to GBHQ. The plan is to rebuild Scrozzle’s Cybergate so they can go directly to the Cyber Dimension to rescue Devon. 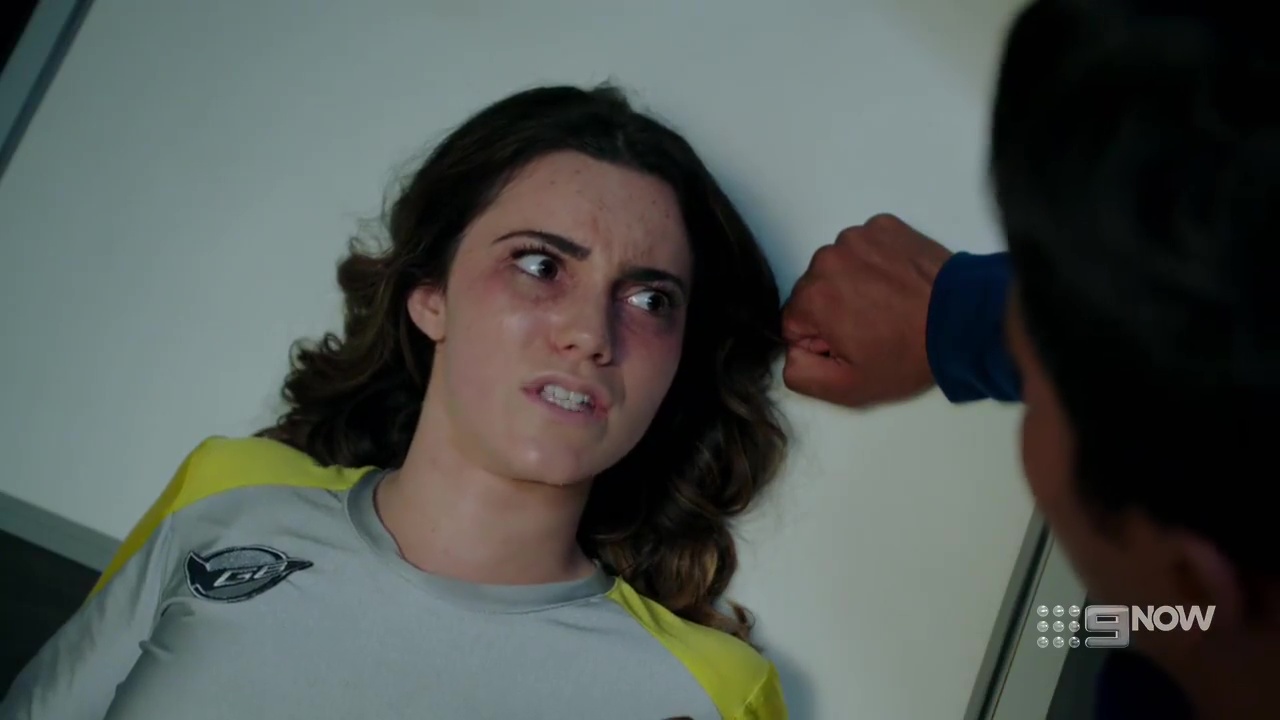 Just then, the Pod alarm sounds and Roxy finally wakes up.

Ravi tells her to take it easy, but Roxy has big news. Her mind was connected to evilRoxy the entire time and she knows the big plan.

Scrozzle begins the transfer of Evox into a physical body. And Roxy says once that happens, they’re all dead.

Well, if only the rest of the half-season were this exciting, right?

This episode definitely packed a lot into it. I even feel like it packed two episodes worth of story into it. A few things didn’t have time to breathe, like Ravi’s battle with avatarRoxy or Mayor Daniels learning Devon was the Red Ranger. (It was a very underwhelming reveal, tbh.)

Still, it’s hard for this episode not to be exciting when so much was happening all at once.

Other than the sort of underwhelming reaction from Mayor Daniels, the rest of the episode was strong. This episode had probably the best and most dynamic New Zealand-original action sequences all season. Ben and Betty’s shopping cart takedown of the Tronics was even more enjoyable than most of the action sequences and fight scenes from the season. Creative and fun.

Ravi has really become the season’s most developed character. And the moment with his mother who went from reprimanding him to comforting him was so good.

Blaze actually being able to enact a plan was also refreshing. Like I mentioned after the last few episodes, the villains have been pretty pathetic when it comes to their plans and actually causing trouble for the Rangers. That’s why Vargoyle was such a welcome addition and definitely gone too soon.

So seeing the plan actually be successful this time was good. It gives the dire situation more legitimacy, so to speak.

What I’m most interested in is what actually happens after the midseason finale. I can only assume Evox ends up destroyed. (Otherwise, what’s the point of this midseason finale, you know?) So I’m very interested to see who becomes the new big bad.

I supposed it could be Blaze, to mesh with the Go-Busters footage. But thinking about the footage, I knew avatar Roxy would have to bid farewell before the end of this midseason. Should be interesting to see where Roxy fits in after she recovers.

Overall, a very exciting episode and great lead-in to the midseason finale. Definitely one of the strongest and most enjoyable episodes of Beast Morphers so far. But again, probably could’ve been great as Episodes 18 and 19 instead.