Marvelous tells Yamato, Kagura and Stinger he’s fine in Gaisorg’s helmet and he will use it to find Luka. He takes off, but Yamato tells Kagura to follow and make sure he’s alright.

Marvelous finds where Luka and Takaharu are chained up and he frees them. But Marvelous can’t control Gaisorg taking over. Luka acts fast and shoots at the helmet, knocking it off and releasing Marvelous.

Kagura and Takaharu rush over to Marvelous, but Luka just kicks him in the stomach and he regains consciousness. She scolds him for acting foolish, but he says he knew it’d be okay since she was here. 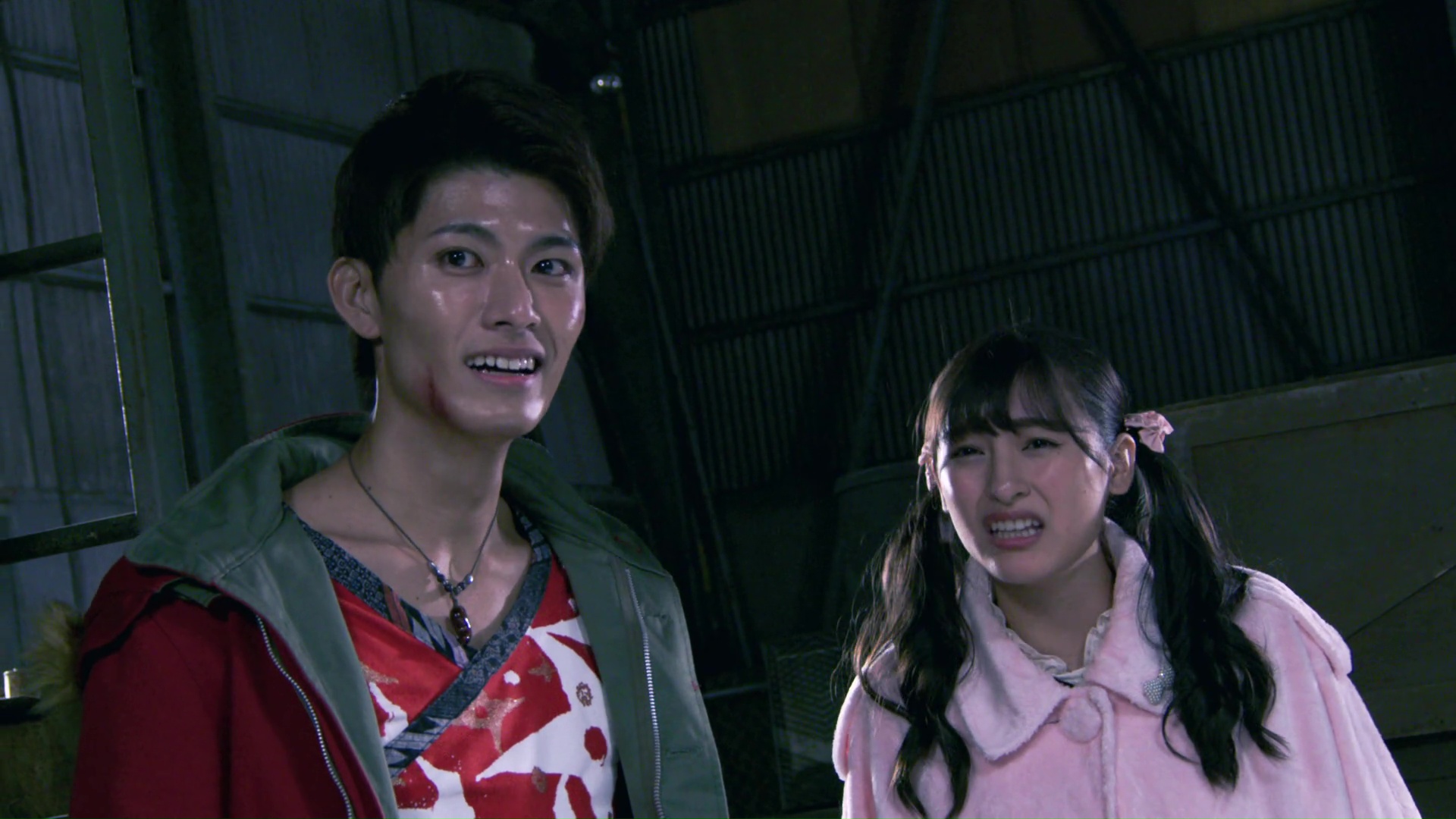 Luka calls him an idiot. Takaharu and Kagura just watch amused and in disbelief at their dynamic.

Meanwhile, Stinger asks Yamato to hold up a minute. He apologizes for acting on his own. But Yamato says without Stinger, they wouldn’t have found out about Ultimate Dai Satan in the first place. Stinger appreciates the kind words. They hurry over to Rita.

Luka explains the Gaisorg armor was created from the emotions of an aggressive tribe that tried to conquer the galaxy and has wandered tens of thousands of years searching for the strongest hosts.

Just then, Rita gleefully calls to the now activated gem to grant her wish. Yamato and Stinger arrive and try to stop her, but she proceeds with her wish. The large gemstone glows.

Stinger asks what happened to the former guardian of the stone and Rita basically says she killed them. Because she couldn’t collect the stones herself, she used Super Sentai to do it for her.

Rita does not care if she too is killed by Dai Satan. She’d rather the entire universe disappears.

Stinger calls Marvelous to allow them to listen in to Rita’s explanation.

Rita says there was no justice on her planet. Everyone served evil. She heard stories of heroes from across the galaxy, but no one ever came to save them on their poor planet. Instead, people pretending to be heroes victimized even children. That’s how she lost faith in everything. 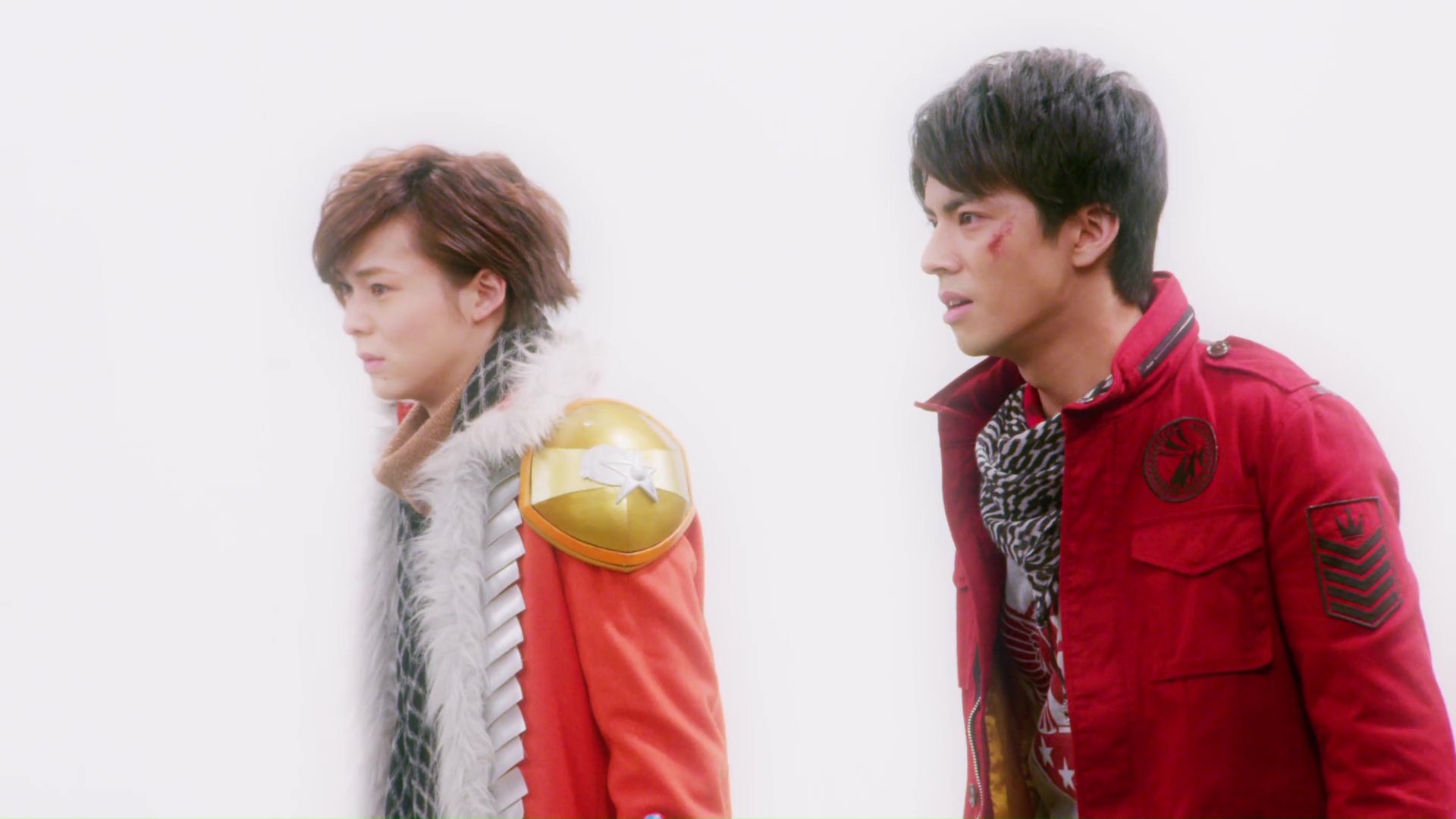 Rita says even if she lives, she would have nothing to believe in. So she might as well destroy the universe and die right along with it.

Stinger says she should believe in herself then. He says if she can hate the universe for having no justice, then she can’t possibly be evil. Even when people around her served evil, she didn’t, because somewhere deep down she wanted to fight for justice.

Rita tells Stinger to stop talking to her like he knows anything about her. Stinger tells her about his brother who hated evil, but fell to it when seeking power to fight it. He lost his sense of righteousness in pursuit of power and there was no turning back.

Rita refuses to be fooled by Stinger’s words. She sends both Stinger and Yamato flying as they immediately morph.

Rita heads to the quarry. She tosses her staff into the ground, the gemstone activates and crashes, causing the ground to open up. Dai Satan emerges.

Rita calls out for Dai Satan to begin ending the universe and huge explosions engulf Stinger and Yamato. They try leaping up to attacking Dai Satan head on, but they just get swatted back down to the ground, forcing them to demorph.

Marvelous, Kagura and Takaharu arrive and quickly join in to take on and finish off the grunts.

The Oddball Team are on the battlefield for the first time together. Marvelous tells Yamato to take the lead.

The Oddballs morph and deliver an explosive roll call.

Rita is not impressed. She is confident Dai Satan can handle the five of them.

The Oddballs all power up and fly straight at Dai Satan before running through and jumping up in the middle of explosions. They then fire at Dai Satan as Marvelous calls Luka to check on her progress.

Luka gets to the mechanism blocking the off-planet frequency. A dozen grunts appears and she easily fights them off. She morphs and shoots at the contraption.

The Oddballs all use their finishers at Dai Satan, but the attacks get swatted right back at them. Dai Satan stomps the ground and the surge of fire forces the Oddballs to downmorph to their base forms.

The Oddballs refuse to give up. They remember all their Super Sentai comrades entrusting the fate of the universe to them and they use that trust and belief in them to give them power they need.

Just then, Akarenger appears to Marvelous and gives him a key with the power of all Super Sentai heroes ever.

The jamming contraption has knocked Luka around and forced her to demorph. But she is now able to shoot at the contraption, shattering it and deactivating the signal jamming seal around the planet.

Marvelous summons GokaiGalleon and has it ram into Dai Satan, pinning him to the rockface.

The Oddballs get in formation for a Super Sentai Special Storm.

They each kick and whack the super ball to each other before Marvelous uses a Final Wave to send it flying to Dai Satan and finish him off for good.

The Oddballs are forced to demorph. 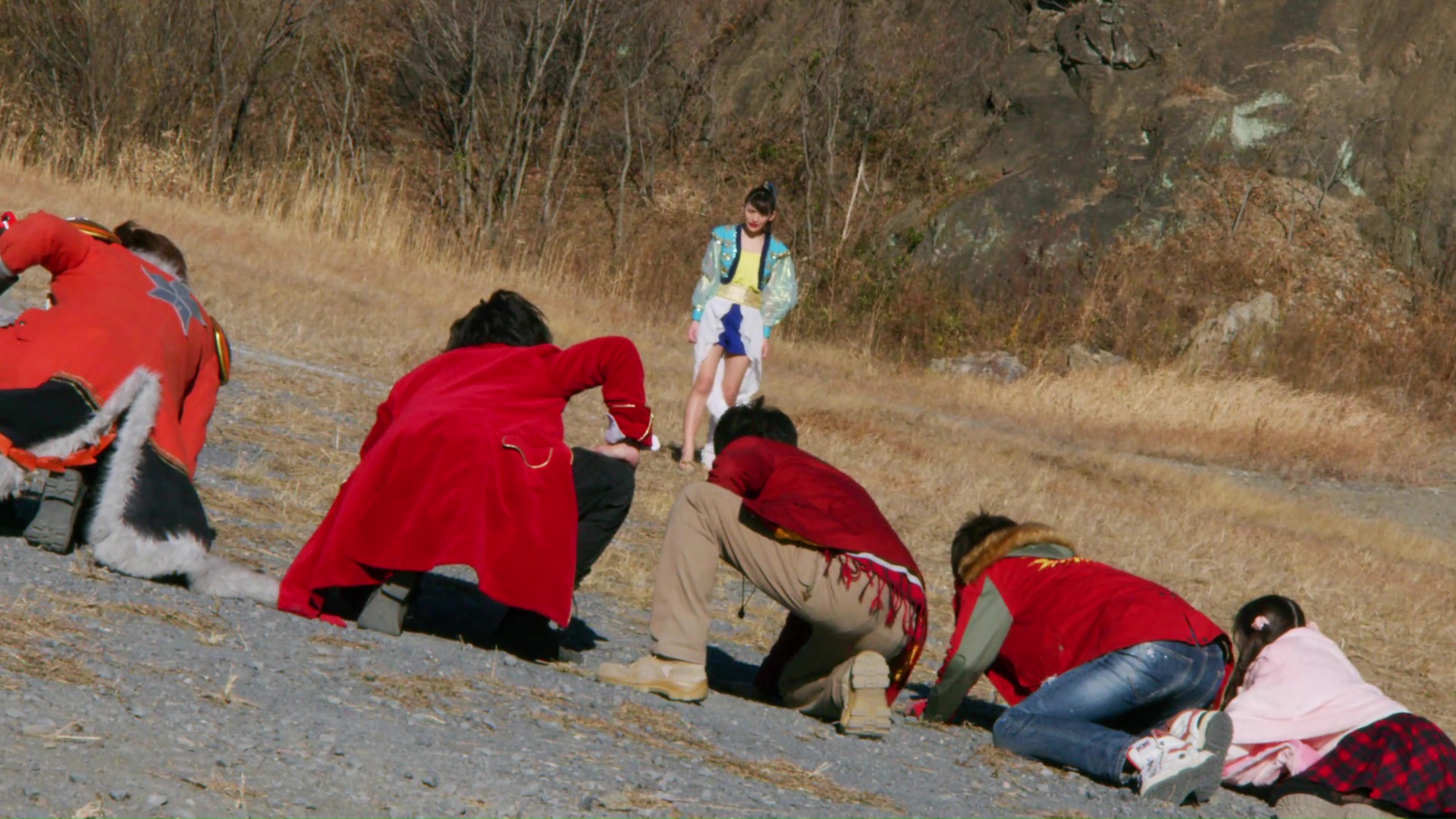 Rita is incensed and she summons the Gaisorg armor for herself which she is able to control on her own.

Rita delivers an Ancient Break Edge at the Oddballs, but two Ryusoulgers appear and take her on.

Rita takes Kagura hostage, but the Ryusoulgers use their Ryusouls to grab Kagura before slicing the Gaisorg armor off of Rita.

Kagura gives everyone a high five, but Marvelous isn’t in the mood. 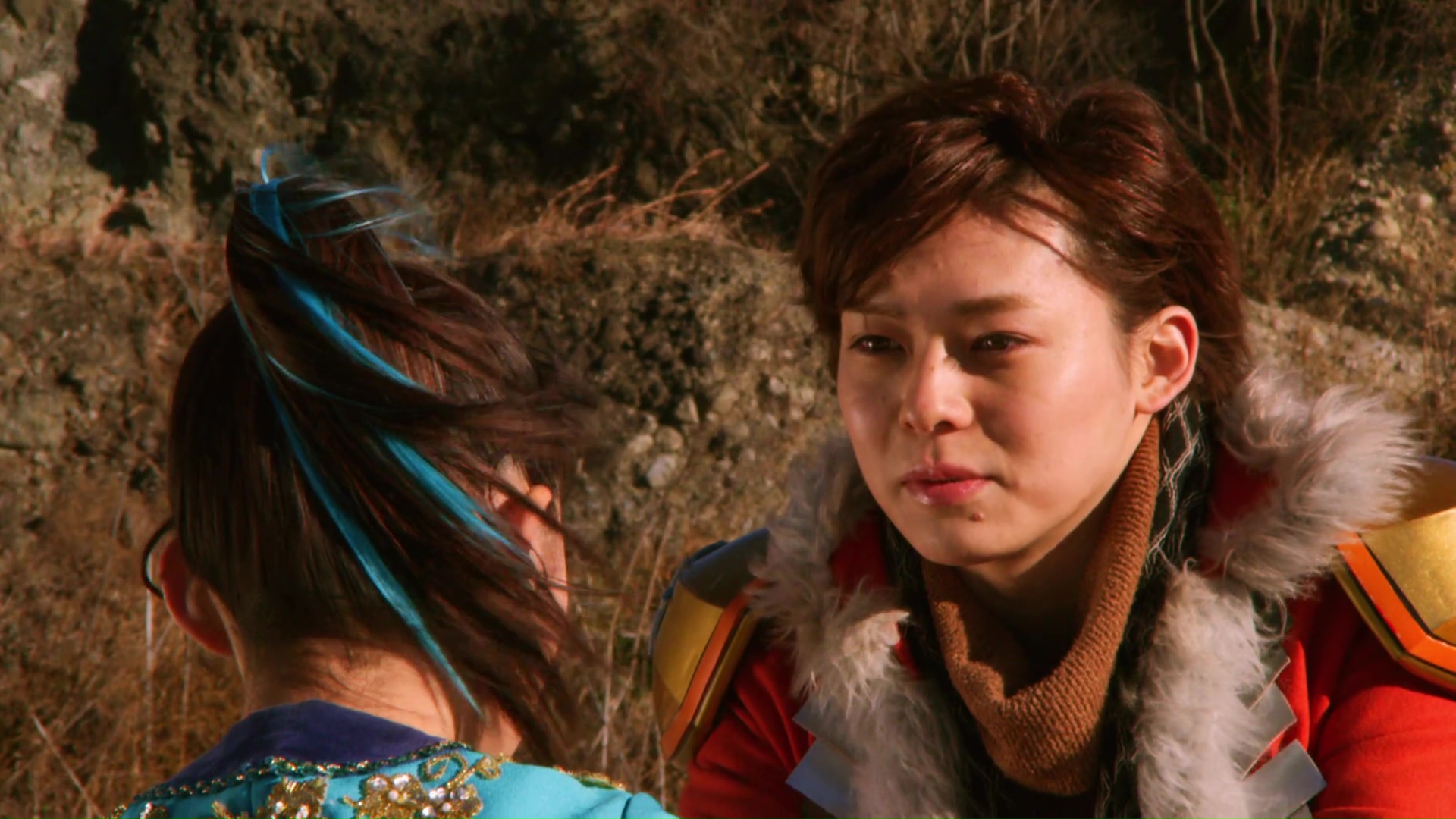 Stinger walks over to Rita and puts the handcuffs on her. He tells her he wants to see her smile someday. So she must atone for her crimes first. She nods.

Yamato asks Marvelous if it’s okay for him to forget his “treasure”. He says it should be okay. Luka is annoyed she has to wait this long to get picked up.

The Oddballs prepare to say goodbye to each other.

Kagura says she is glad to have met them all. She may not have gotten her wish granted, but she feels like she has worked hard. Takaharu says she definitely did.

Yamato adds that while some dreams may be impossible, they can lead to new dreams as well.

Takaharu finds a gem fragment in his pocket and gives it to Yamato for his wish.

Kagura hopes they can meet again someday. Yamato is sure of it. As long as Super Sentai continues.

Someone picks up Gaisorg’s helmet. And one last Ryusoulger teaser.

This has really been a great little miniseries. Ryusoulger looks interesting, but I definitely wish we got more of the Oddballs. They really crammed in a lot into these four weeks and there was a lot of material to really stretch this out even a month or two more.

Still, I definitely enjoyed the four episodes we got. This was a solid finale though things got a little haphazard in the last third of the ep, especially with the requisite pop in for the next season team that we usually get in the VS movie.

Rita’s motivation as she explained it was pretty good and definitely the stuff fit for a full season worth of story. Unraveling that side of a villain or Big Bad would’ve been a great story. But it was definitely sad and relatable to hear her story as she described it. Obviously, you don’t have to go the lengths she did. But for anyone who was traumatized like her, most likely, you can see how she could be driven to madness like she was.

Stinger’s words to her definitely fit with his character. And we’ve seen him have compassion and understanding for people who may have been driven to the dark side. First his brother, as they reminded here. And then of course there’s the problematic Episode of Stinger movie. So him wanting to lift Rita up, but not disregarding her sins is again very much in character for him.

And that’s been the case the whole series. Each of the five Oddballs, plus Luka, really got their time to shine on their own. And except for the first episode or two with Takaharu, each character was as we know of them. The series pulled from their history and backstories to really tie everything together. And that was a really great tribute to the series as a whole, as well as the respective seasons of course.

Always great to sneak in some singing Yousuke Kishi of course, even if only in the background. And I was getting very romantic vibes between Marvelous and Luka. It was definitely more than the simple banter we saw during Gokaiger and all their other visits after. Hehe

The episode was also one of the best Koichi Sakamoto explosion extravaganzas ever! Completely insane, but definitely lots of fun and enjoyable.

I really could’ve done without the Ryusoulgers popping in to take on Rita. I would’ve preferred the Oddballs be the ones to face off against Rita as well after Dai Satan. I get the need to promote the next season, like I do with the movie cameos. But I still prefer not having those cameos instead.

Anyway, while I’m looking forward to Ryusoulger, I’m definitely going to miss the Oddballs and wish we got more than just four episodes. But they were four amazingly fun and enjoyable and emotional episodes. And that’s definitely great.

Recap: Mashin Sentai Kiramager, Episode 39 – The Emperor is a Sniper