Ora appears and freezes time so she can reinsert the reactivated Watch into the father, Ida, so Another Ex-Aid can be revived. That causes Emu to dehenshin and they all exit the game.

Emu doesn’t know what’s going on and it appears he has also lost his memory of being Ex-Aid. Tsukuyomi reiterates that when Another Rider is revived, the original timeline is changed.

Emu asks them what they’re doing here and Sougo says they’re here to help the unconscious patients like him.

Emu asks them to stay out of this as what he’s doing conflicts with what Sougo and them are doing. Emu leaves and they head back to the shop.

Geiz says they can’t depend on Emu so he will go to 2016 and defeat Another Ex-Aid. He asks Sougo to stay out of this and leaves.

Tsukuyomi reminds Sougo what he said in the last episode about friends in trouble. Geiz and Tsukuyomi had many friends who died while helping them try to fight Oma Zi-O.

And they weren’t able to save them. That’s why Geiz sees Sougo not as who he is now, but who he will become.

Sougo asks if Tsukuyomi feels the same way. She doesn’t know, but she does want to help Sougo down a path in which he does not become Oma Zi-O.

Geiz arrives in 2016 just as Emu and Hiiro are finishing off a battle. They head back to the hospital where Geiz explains the situation.

Hiiro thinks it is nonsense and he leaves. 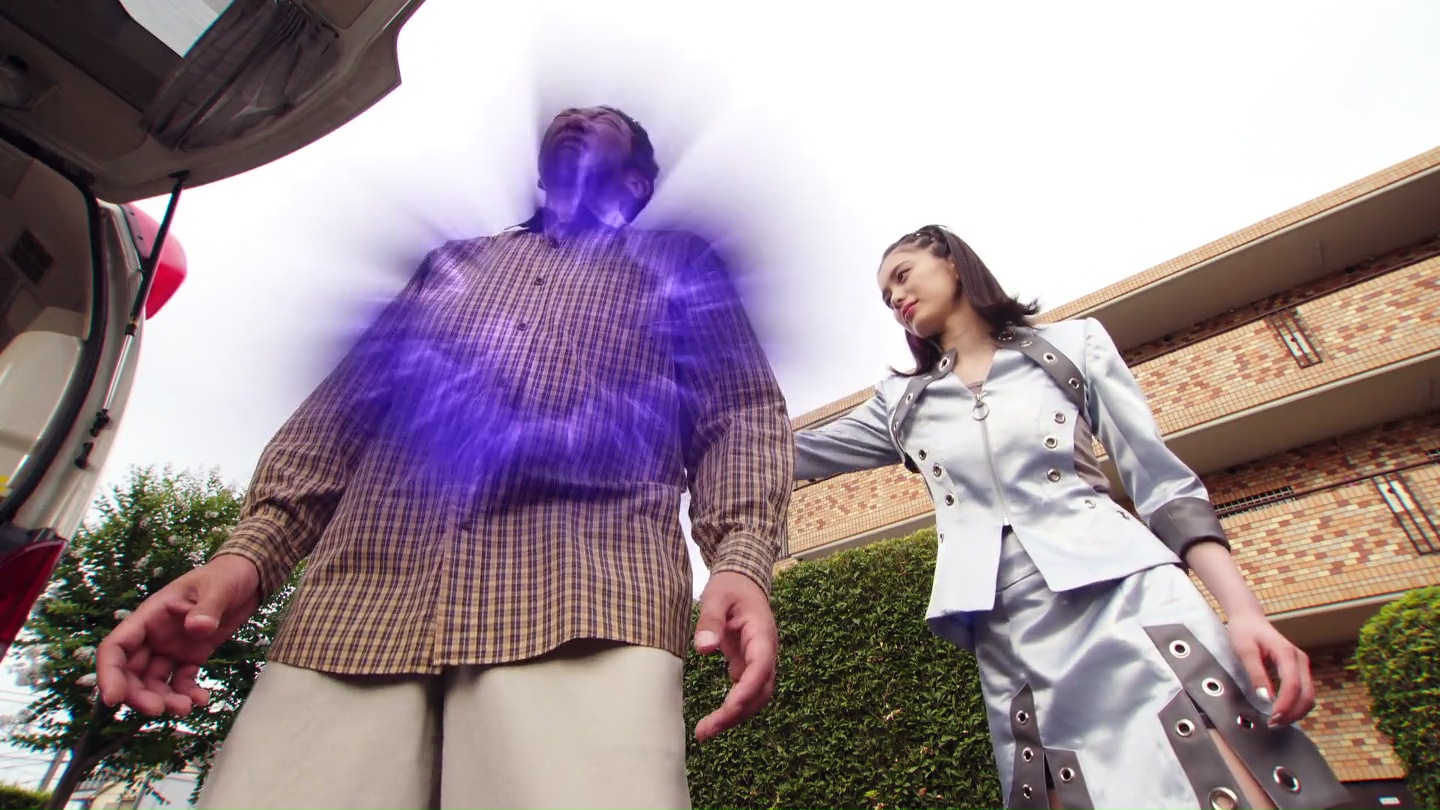 Across town, Ora enters the contract with Ida, the father of the sick boy, to become Another Ex-Aid. She activates the Watch and shoves it into his body. 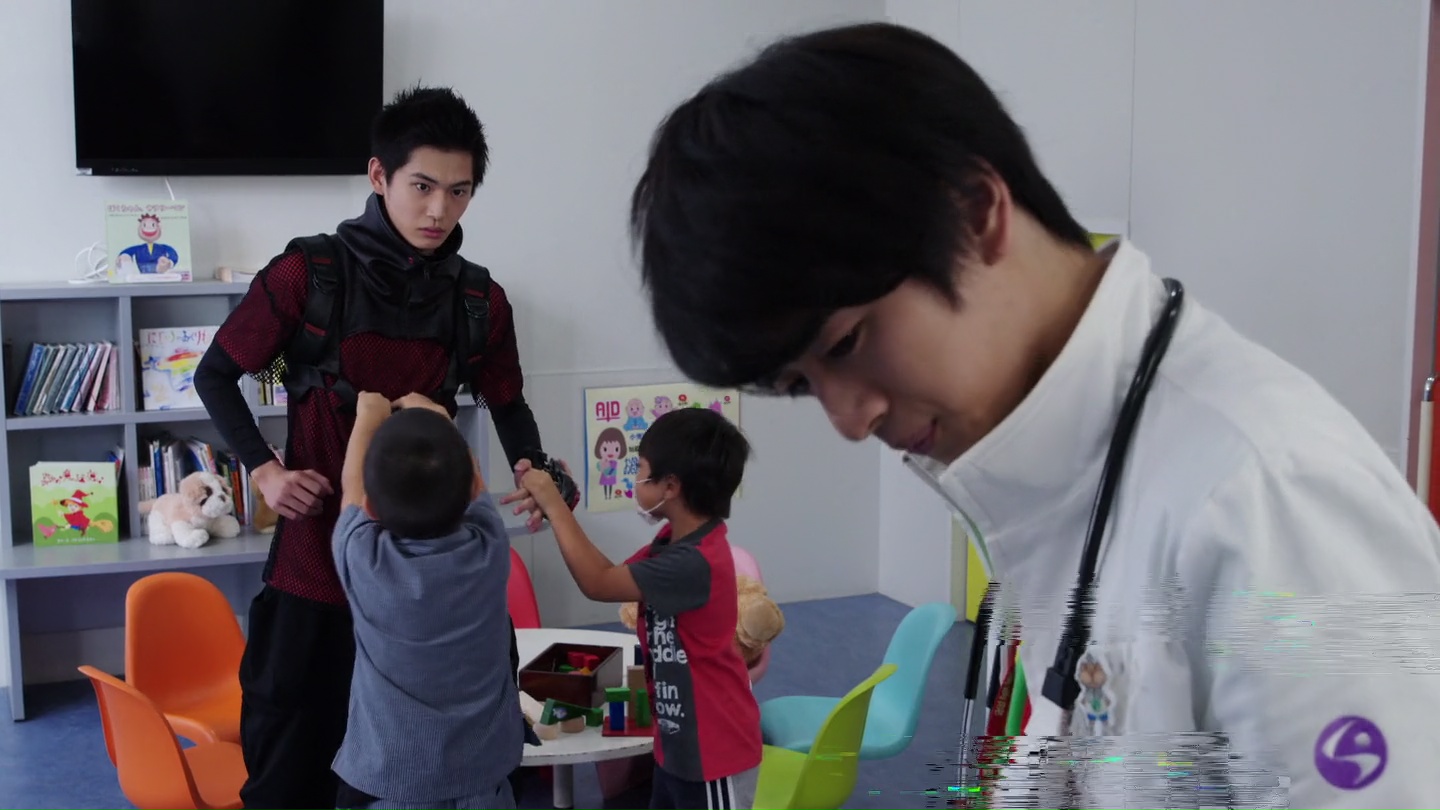 Back at Seito University Hospital, Geiz notices something is happening to Emu and realizes it has begun.

Geiz finds Another Ex-Aid and is able to destroy it, but is surprised when it quickly revives. He calls Tsukuyomi to tell her what’s happening and asks her to find out how to defeat it.

Sougo wonders what Emu is trying to do.

Emu is on the rooftop and enters the game world where he tries to get Ida, as Another Ex-Aid, to stop his rampaging and instead be there for his son Keisuke. Ida transforms back to his human form and says he has no other options. If doctors can’t save his son, then he will do it himself.

Ida tells Emu to get out of his way. But Sougo, with Tsukuyomi, appear to say Emu isn’t in his way. After looking into it more with Hiiro’s help, they found that all the victims have similar-sized organs. Keisuke needs a heart transplant, so all the victims were possible donors. But Hiiro says it is too late for a transplant now.

Sougo says that’s why Ida created this game. And Emu was trying to give Keisuke the will to live by having his father Ida by his side.

“You know everything,” Emu says.
Sougo says it’s because he knows someone like Emu. That is, Tsukuyomi who knows someone that needs to be defeated, but is still trying to save him anyway.

Sougo says the common thread between all of them is their resolve to save the people they want to save. But sacrificing other people is not the way to go about it.

Ida does not want to hear any more of this. He transforms back to Another Ex-Aid and leaves.

Sougo tells Emu that he doesn’t need to do this alone. Sougo will let Emu take care of the patient while Sougo takes care of Another Ex-Aid, Ida. Saving his people is the duty of a king, after all, Sougo adds.

Emu is amused by Sougo’s words and gives him the Ex-Aid Watch. Emu doesn’t know where it came from, but he feels he should give it to Sougo.

Sougo hops in his Time Mazine. But before he can zoom through the portal, Uhr pops in to try and stop him. Sougo henshins and they battle. Sougo is able to best Uhr in this battle and get himself a chance to jump through the time highway. Uhr is amused.

In 2016, Geiz is still battling Another Ex-Aid as Sougo arrives. “So you really want to go down the path of becoming Oma Zi-O?” Geiz asks as he grabs Sougo’s collar.

Sougo says no. But he believes Geiz and Tsukuyomi. That’s why he will fight.

Sougo henshins and he and Geiz battle Another Ex-Aid and basic Bugsters. 2016 Emu arrives and he also henshins to help.

Woz pops in and reminds him that a Rider’s power is needed against Another Rider.

Because of the double Ex-Aids, Emu is forced to dehenshin. Sougo takes the Ex-Aid Watch 2018 Emu gave him and he activates Ex-Aid Armor.

Woz makes the Zi-O Ex-Aid Armor proclamation and Sougo takes on Another Ex-Aid.

Geiz finishes off the basic Bugsters and Emu tells Sougo to uses his finisher.

Sougo prepares a Critical Time Break which Emu sees is very different from a Mighty Critical Finish. But it still does the job. Another Ex-Aid is defeated and Ida is back to his human form.

Ida regains consciousness. Sougo says he and his son will be fine. He introduces Emu and Ida to each other and asks Emu if Ida can bring his son to Seito University Hospital.

Sougo also asks Emu to hold on to the Ex-Aid Watch. Sougo says it is what will connect them in the future.

Back in 2018, Sougo spots Ida with a fully recovered Keisuke on his way to school.

Before dinner, Geiz wants to know what Sougo meant by him believing in Geiz and Tsukuyomi. Sougo says his dream is to be the king and he will follow the path he sees will take him to that dream. But if he chooses the wrong path, he is sure Geiz and Tsukuyomi will do what they think is right and kill him if needed. He trusts their judgement.

Sougo says he isn’t sure if he truly is on the path to Oma Zi-O, but he’s happy to have found friends in Geiz and Tsukuyomi.

Emu and Hiiro pop up for a live check-in. Emu corrects Hiiro when he calls him an intern. Hiiro says there’ve been so many epilogues, he can’t keep up.

Sougo asks Emu and Hiiro if it’s hard to play themselves with different memories. Emu says of course it’s hard. He shows Sougo a script and it shows that after a timeline change, “After Hiiro” is labeled as “A Hiiro.” When Another Rider appears and history changes to a world where they never become Riders, they are known as “After”.

Sougo is confused, but Geiz and Tsukuyomi says Sougo should put in a little more effort to follow.

Hiiro demonstrates how A Hiiro and B Hiiro are different by delivering his catchphrase. But he says it actually shouldn’t be any different since his personality wouldn’t change even if their history did.

Emu says he is either “A M” or “B M”. Hiiro thinks that’s absurd and he leaves. Emu goes after his sempai.

What is it about the 2nd halves of these two-parters? After actually kind of being able to follow along more last week, I’m back to being a little lost again. lol

So… umm… I think. lol Just reading what I’ve just typed has confused me all over again. I mean, I know lots of things have gone over my head for sure. But it does seem like there’s an unending loop in that process that doesn’t completely add up somewhere. Like, they need the Watch to defeat the Another Rider, but where did the Watch first come from?

It’s also hard to keep track of what year they’re in since they appear to keep going back and forth. At least on first watch. It seems Zi-O needs multiple watches to be able to catch everything. I mean, the years pop up, but you’re still trying understand what’s happening everywhere else. lol

But I believe the Timejackers and their contracts take place in the past. Obviously in the year that the original Riders existed. And all Another Riders get defeated once before being officially revived by a Timejacker? (Different from the instant reviving?) Which then initiates the retconning? I mean, new timelines?

I think I’m getting confused now with what information we are getting in-series and only through the X.5 episodes lol Like, I was surprised Geiz didn’t know or did not remember that they need the original Rider’s Watch power to defeat Another Rider. Like, he was surprised Another Ex-Aid just revived after what should’ve been a finishing blow.

Overall, it was an enjoyable episode if you don’t think too hard about what’s going on. The story of the episode itself worked in that it was a nice little thing to save the boy’s life. But of course, the ethical dilemma of changing history and all that is a discussion to be had later. If at all. Alongside everything else we’ll have to sort out. Ahhh! lol