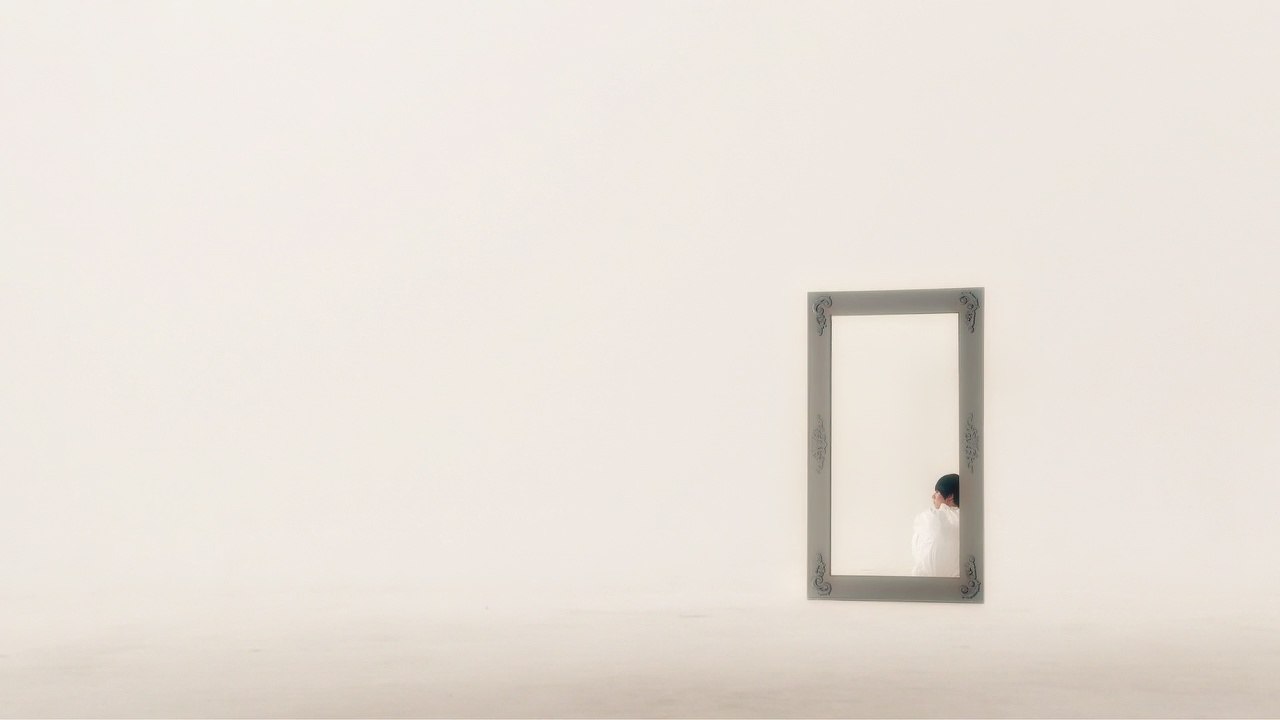 計画通りダ!
Papa Katsu declares everything has gone according to keikaku. Not only did he lure them here just to turn the Bottles into Lost ones, Evolto is still alive with his genes sucked into the Driver. Papa Katsu says Evolto cannot revive as long as the Driver is in the ice canister.

Papa Katsu invites them all into the Tower to explain some more. Evolto used his own body to purify the Lost Bottles for the Black Panel. Genius made Evolto develop human emotions and that satisfied the requirement for creating Lost Smash. The original plan was for Papa Katsu to revive Evolto afterwards, but Papa Katsu says he was never going to.

Ryuga doesn’t understand what’s going on. Kazumin says Papa Katsu has always been on their side. 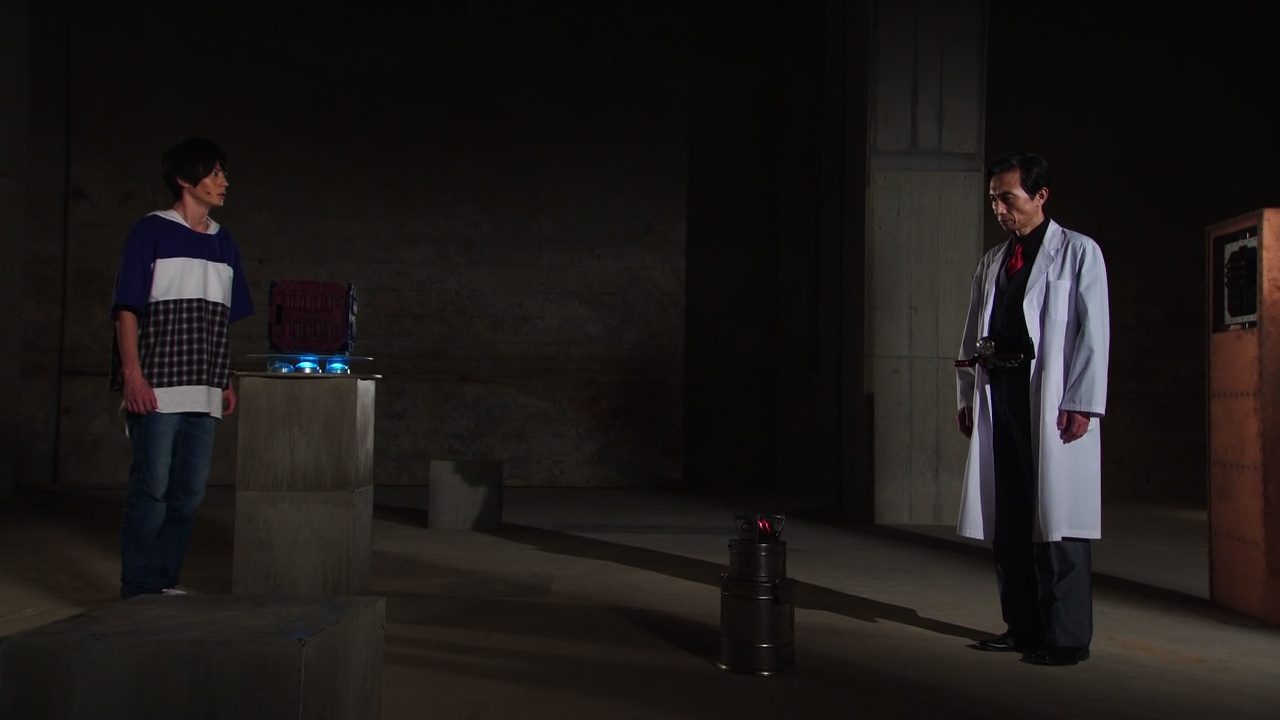 Sento says there is no way he would believe his father now after deceiving them for ten years, thus resulting in the death of millions of people. Papa Katsu says it was to protect humanity.

You should’ve done it faster, Sento says. Papa Katsu explains that there was only one way to fix what happened on the day of the Skywall Tragedy. And that is to create a new world. Once the Black Panel is full, it will create a wormhole that will allow warping.

Warping will allow them to travel to any planet. Usually Evolto absorbs all the energy into himself after destroying a planet. A wormhole would allow Evolto to gobble up more planets at a faster rate. Sento asks how that would help humanity. 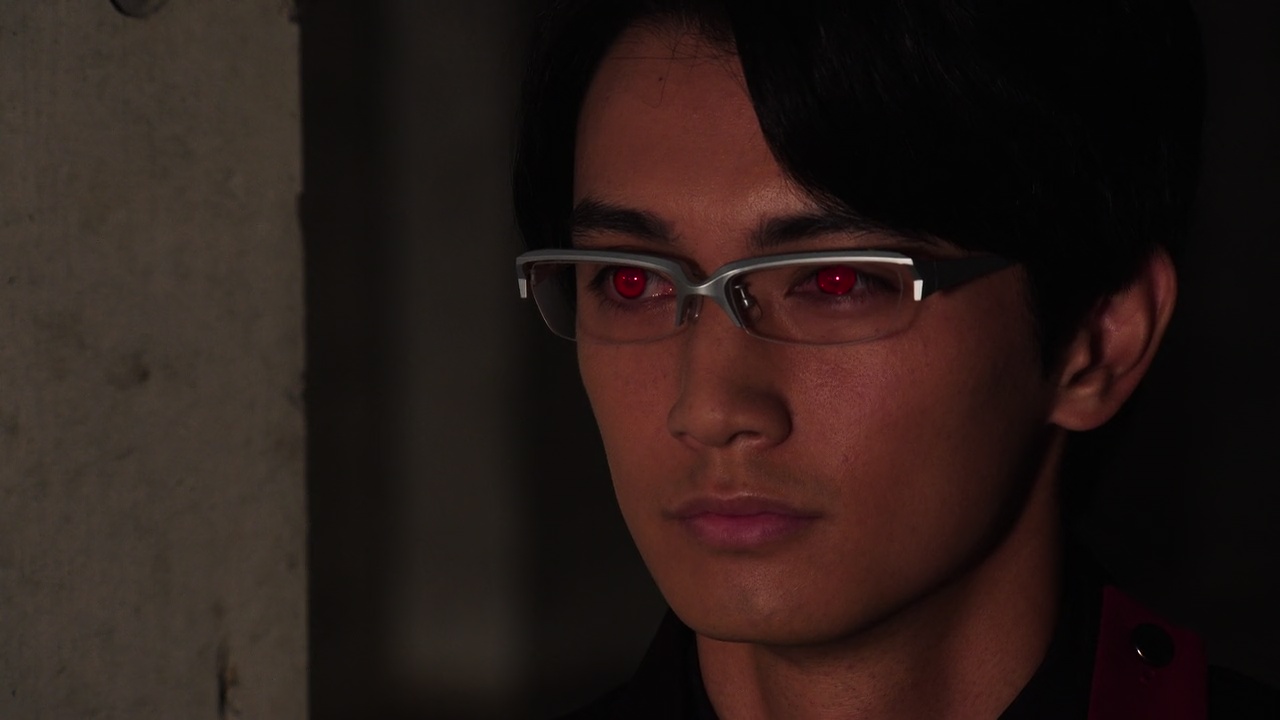 Just then, Nariaki arrives. But he is actually being possessed by Evolto who escaped in a blob just before he blew up. Achieving his complete form allows him to more freely control his genes. He knew all along that Papa Katsu was going to betray him.

Evolto stings Papa Katsu with poison. Sento runs over to his dying father as Evolto henshins. Ryuga, Kazumin and Gentoku also henshin and they battle.

As Papa Katsu begins to turn into shiny specks of light, he gives Sento two cards and whispers some final instructions to him. Papa Katsu then runs his hands through Sento’s hair and the both of them flashback to him doing to same to Takumi. 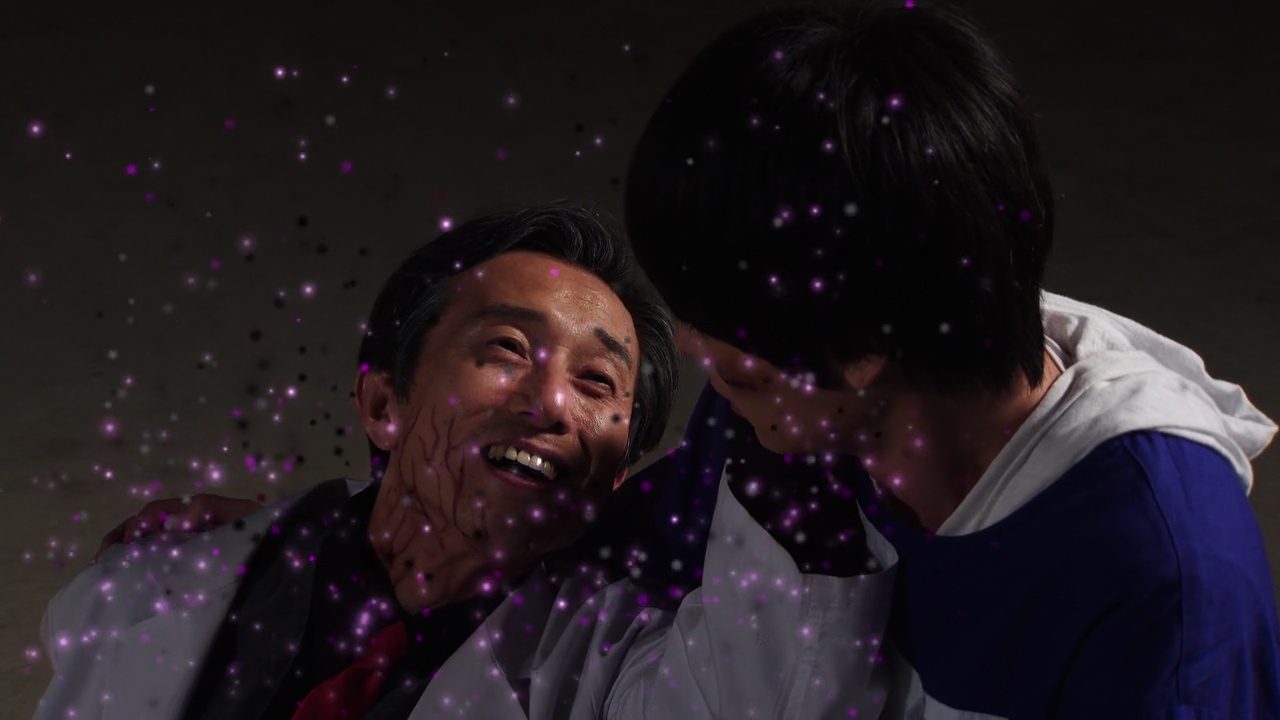 Kazumin is distracted by the scene and that opens the door for Evolto to attack him with some red gene-colored squiggly lines. That forces Kazumi to dehenshin.

Evolto opens the cryogenic canister to retrieve his Driver. He ejects Nariaki from his body and uses his own Driver to henshin into Evol Cobra.

Gentoku tries whisking them all away. Ryuga grabs the Black Panel and Pandora’s Box, but Evolto shoots at him, causing him to drop the Panel before Gentoku can whisk him away too.

Back at Nascita, the Gang watches the news reports of a new Japanese government being formed. Sento, meanwhile, has been downstairs all night and day trying to figure out the password to unlock the information from the two cards his father gave him earlier.

Sento’s flashback reveals Papa Katsu told him about a White Panel and the Hazard Trigger. Takumi pops in to say the White Panel does not exist and that Sento should not trust their father. After all, it was Papa Katsu who drove them to create the Rider System that has killed so many people. 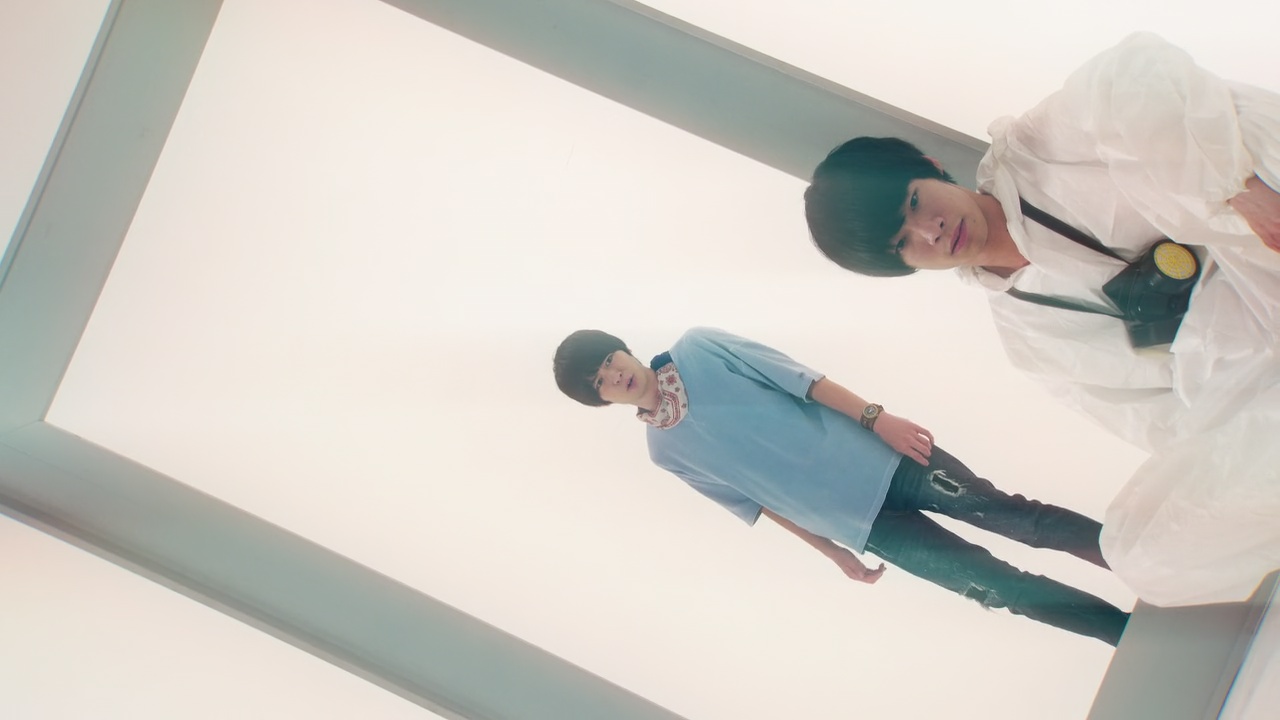 Sento says their father only pretended to be the enemy in order to defeat Evolto.

“Are you sure about that?” Takumi asks. “If he were a good person, he wouldn’t have designed something like Hazard Trigger that makes you lose yourself.”

Sento insists the Hazard Trigger was created for a different purpose he doesn’t know yet. Takumi thinks Sento just wants to justify their father’s actions.

“I won’t let him fool me anymore.”

Misora comes running down to tell Sento there’s trouble. But the rampaging in the city is just to lure Sento, Ryuga and Gentoku to Evolto. An angry Sento wants to avenge his father, but the Genius Bottles does not turn on.

At Nascita, Kazumin suddenly awakens and zaps Misora and Sawa unconscious. Misora drops the last Lost Bottle which Kazumi picks up and zooms over to the rooftop to hand it to Evolto.

Evolto removes himself from Kazumi’s body and returns to his own to make himself complete again. He tosses Kazumi over the guys and then inserts the final Bottle onto the Black Panel. He shoves the Panel into his chest and Evolto evolves.

The three charge at Evolto, but he just swats them away. Kazumi henshins and joins in the fun only to get kicked aside as well. Evolto’s power is really overwhelming now. He grabs Sento and takes him to another planet through the warp. 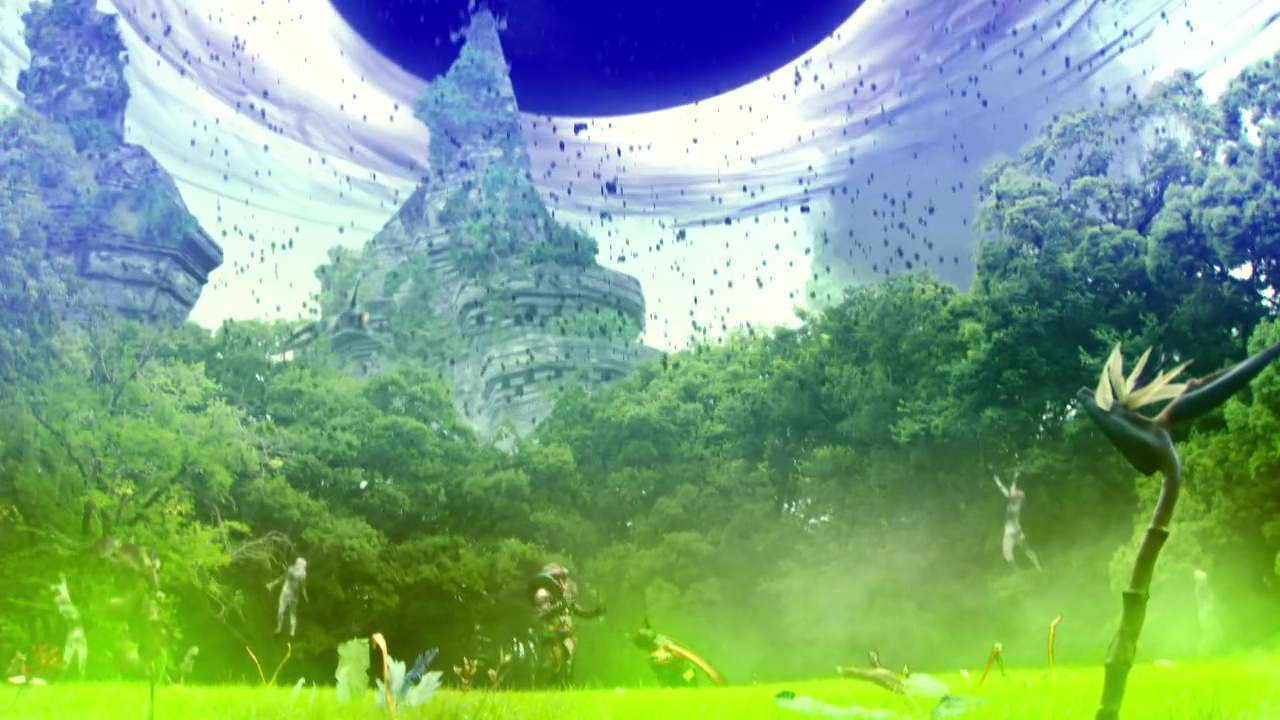 Evolto says he will absorb every planet and create his own universe. He begins with this planet as he creates a black hole that sucks in the planet and all its translucent blob people. Evolto takes Sento back to Earth and then grows new arms thanks to the newly absorbed power.

Evolto then hurls Sento through buildings and slams him on the ground, forcing him to dehenshin. “How do you like the power your father gave me?” Evolto asks. He says it is time for Earth to become a part of his body.

Sento flashbacks to the day of the Skywall Tragedy as Takumi. He is with Papa Katsu who tells him about starting to research alien lifeforms who might attack Earth. And if that ever happens, Papa Katsu wants Takumi to protect Earth alongside him. Sure, Takumi says. 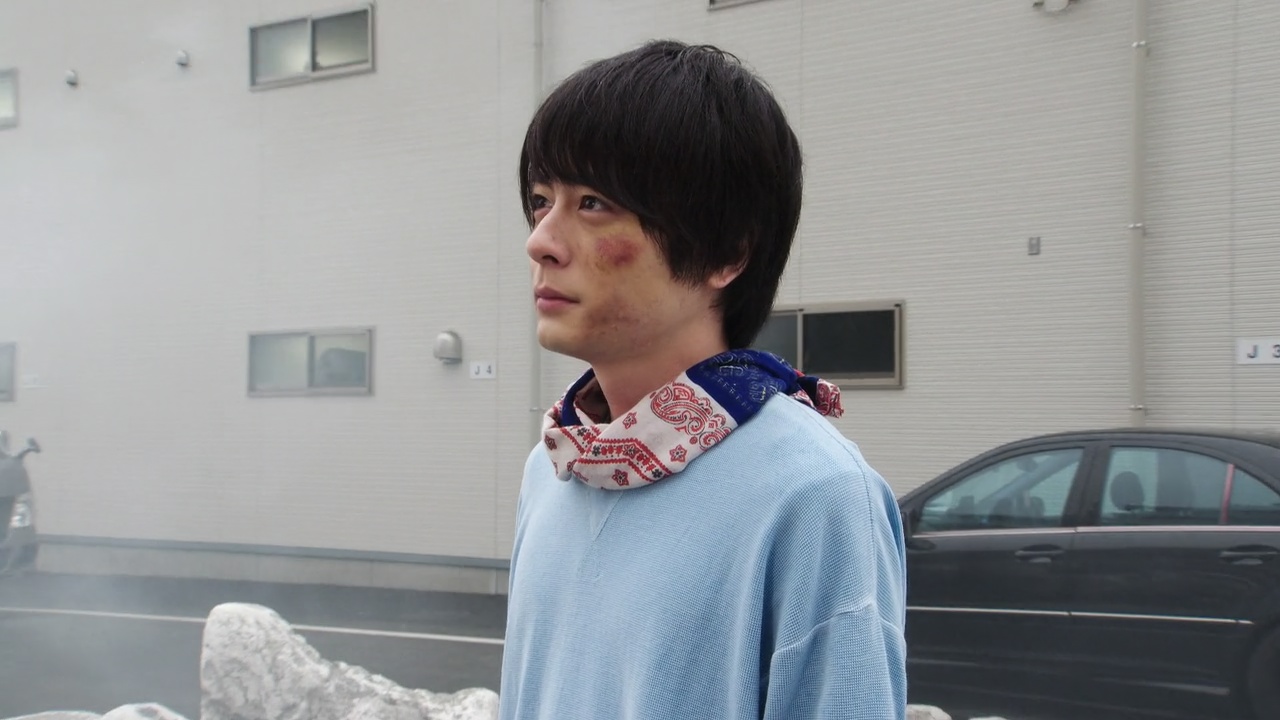 Sento laments the promise they made each other. But he remembers the Rider System was created for justice and hatred does not give them strength. That realization allows Sento to now use the Genius Bottle.

He henshins to Genius and the other three guys join him as they attack Evolto by kicking through huge fireballs.

The kicks seem to pull the Black Panel out of Evolto’s body. Sento then uses a Hazard Finish to punch the Panel, which causes two Bottles to pop out and regain color. Evolto grabs one Bottle and Sento grabs the other.

Back at Nascita, Sento realizes Hazard Trigger purified the Lost Bottles. So Papa Katsu is redeemed!

Sento has another flashback of a happier time with Papa.

Back at the Tower, Evolto watches the news report of the three new governors of Japan. Nariaki walks in and starts talking, but Evolto grabs his neck and tells him to shut up.

Later that night, Sento has finally unlocked the cards and declares he can now defeat Evolto. 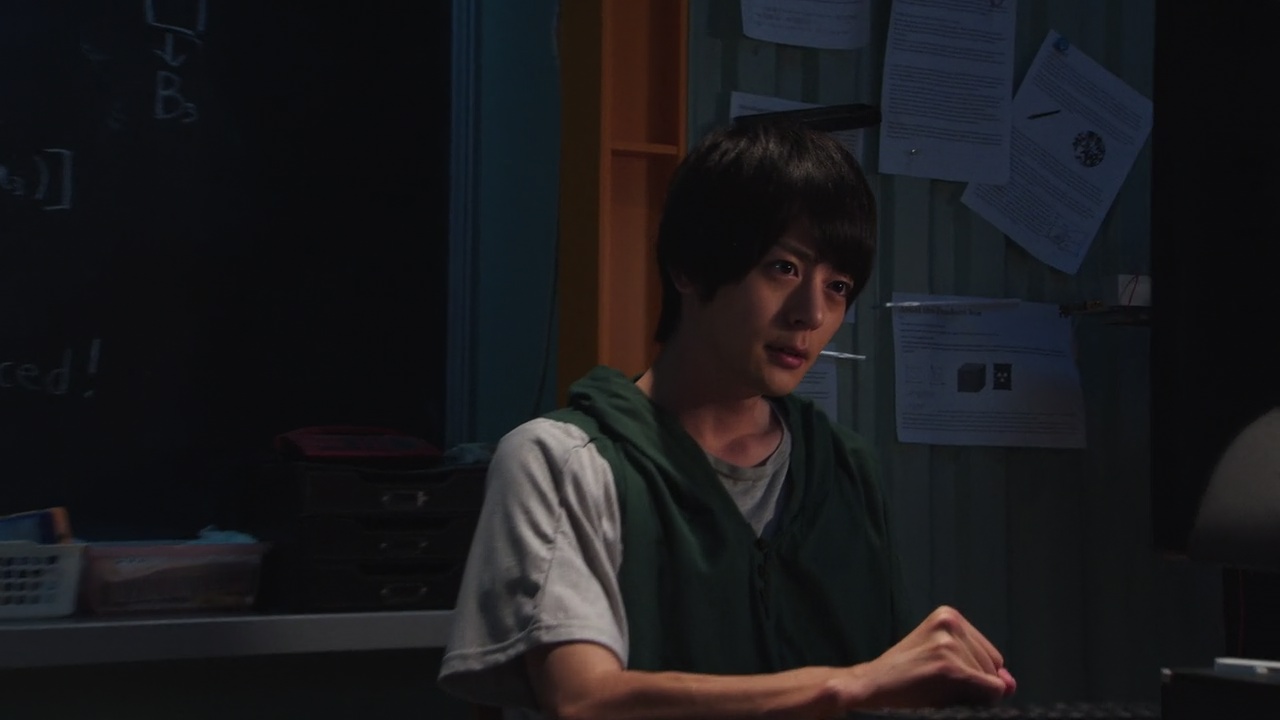 I am definitely rooting for the idea that Papa Katsu really is too far gone and Sento/Takumi will eventually have to see him dead and destroyed at the end of the series. I assume Evolto is not truly done yet. There’s always a chance. But I would be really disappointed if Papa Katsu is fully redeemed or just waved off too easily. It would be very cliché, especially for Build which has done that twist too many times this season already.

So basically, everything went according to Papa Katsu’s plan except for him thinking he can outwit Evolto. Everything else, like making his son suffer for 10 years, the murder of millions of Japanese people, the PPV Rider battles arc… all part of Papa Katsu’s plan to destroy Evolto.

I dunno. It’s hard to care about Papa Katsu’s death since Sento only started caring about him a few episodes ago. I mean, we’ve only just gotten to know Takumi much better. And honestly, Takumi resenting and doubting his father was much more emotional and impactful than any of the scenes between “Sento” and Papa Katsu.

After all, because of Papa Katsu, Takumi is basically trapped inside someone else’s body.

And it was illustrated perfectly by this shot at the end: 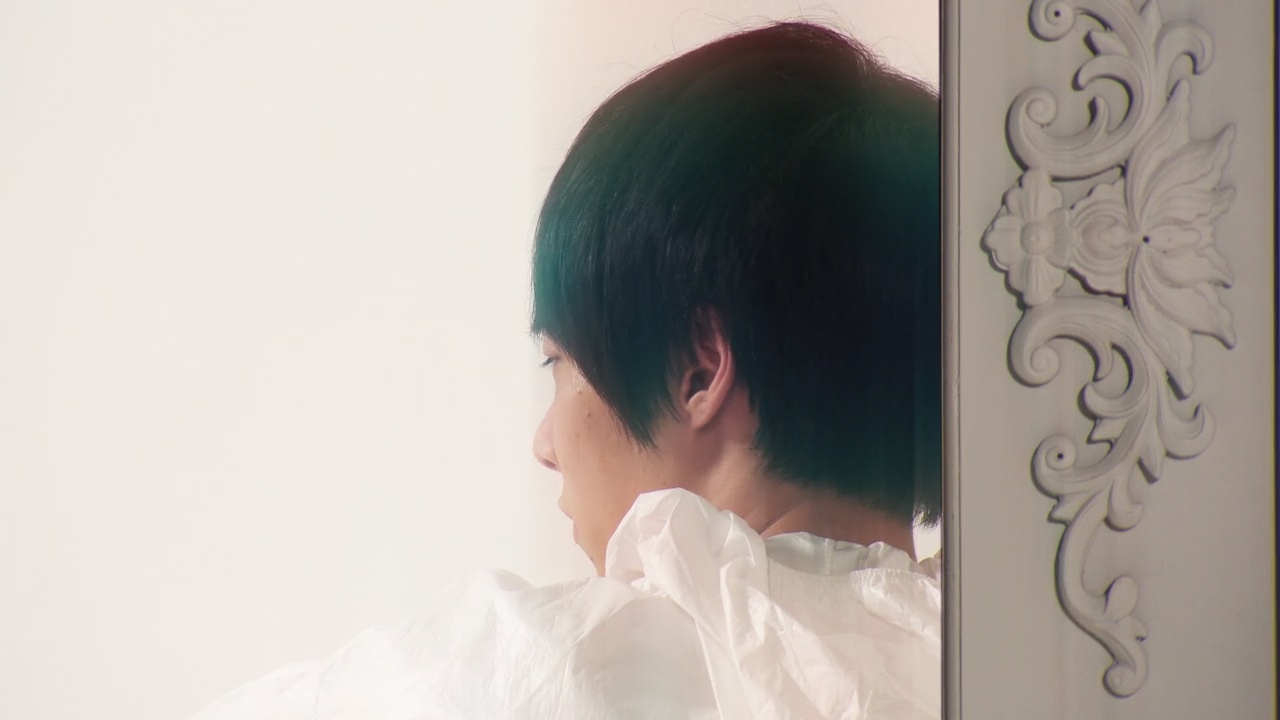 I think that moment alone was more meaningful than the other stuff with Sento, tbh.

I wonder if we will get something more from the apparent disagreement over their father. Honestly, Sento and Takumi’s conversations have been one of, if not the most interesting parts in recent weeks.

Anyway, Papa Katsu’s death was certainly not as impactful as Papa PM’s death which was very effective. We were more invested in that story with Gentoku, even if it also could’ve used a little more development.

I was even more upset about all the translucent blob people from the green planet that died getting sucked into the black hole.

A lot of this episode was really deja vu. Everyone getting possessed. Understanding Sento getting his penchant for keikaku from his father.

The red attack from Evolto at Kazumi already seemed suspicious at that moment since they made a point of Evolto possessing Nariaki just a few minutes earlier. And the red-colored attack obviously matches the red blob.

Still, Kazumvolto attacking Misora and Sawa like that was still a shocking moment. Like, leave them alone. Lol

Otherwise, nothing else in the episode was “shocking.” It all feels like things that have happened in some form already earlier throughout this season. Heck, Evolto wanting to absorb the universe is basically recycling Kyuranger‘s final arc/endgame.

So, while last week kind of perked up my hopes for the final episodes, this episode made me temper my expectations. Again.

I think maybe Build‘s strong start raised my expectations too high for this final third of the season. But who knows what else they’ll pull out of… I mean, they’ve got up their sleeves next.

Recap: Kamen Rider Zero-One, Episode 19 – “An aqua current that encompasses everything around it.”

Recap: Kamen Rider Zero-One, Episode 16 – This is the Dawn of ZAIA