While the time travel team fly through the portal, they suddenly get an alert that there are stowaways on the Orion. They split up to find them and they turn out to be Indavers. Commander Ronpo and Raptor find one first. Tsurugi and Spada find the next one whose face surprisingly falls off. And it can talk!

Turns out Indavers can speak perfectly fine when their masks are off. Stinger and Champ find another Indaver, but there’s one more left. Commander Ronpo tells them to bring the Indavers they do have to the bridge for now.

Commander Ronpo goes back through the ship to look for the last one. Tsurugi and Spada continue to interrogate the Indaver they have. It explains that they are Inda, a lifeform created by Jark Matter who are forced to work as Indavers when wearing the masks. But they are getting tired of the low wages and frequent overtime, so they hoped to ask for help from the Kyurangers.

The Indavers had snuck onto the Orion while the Kyurangers were down on Earth enjoying the barbeque. It also turns out they’ve met before.

This Indaver with Spada and Tsurugi was defeated by the Kyurangers in Episode 1. Spada recaps the first few episodes for Tsurugi who is amazed at how legendary Lucky’s luck can actually be.

Meanwhile, Stinger has his Indaver in a Texas cloverleaf when suddenly Commander Ronpo comes chasing after a female Indaver.

But Commander Ronpo’s back gives out and the Indaver is able to run off again. Stinger and Champ go after it and leave the hurting Indaver with him.

The Indaver tells Commander Ronpo that they were jealous of how many comrades they had and how deep their bond was. The Indavers hoped to join the team.

This Indaver had been defeated by Kotaro when he first became a Kyuranger. Commander Ronpo recaps how he and Kotaro became the 10th and 11th Kyurangers.

Hammie still feels guilty about causing Naga to go dark. Lucky recaps Naga’s emotional journey to remind her that their bond is strong enough to ensure he will be fine.

Back on the Orion, Stinger and Champ are having trouble catching the female Indaver. Spada uses the Andromeda Kyutama to chain her up and then recaps how Kyutamas work and how they found Tsurugi. 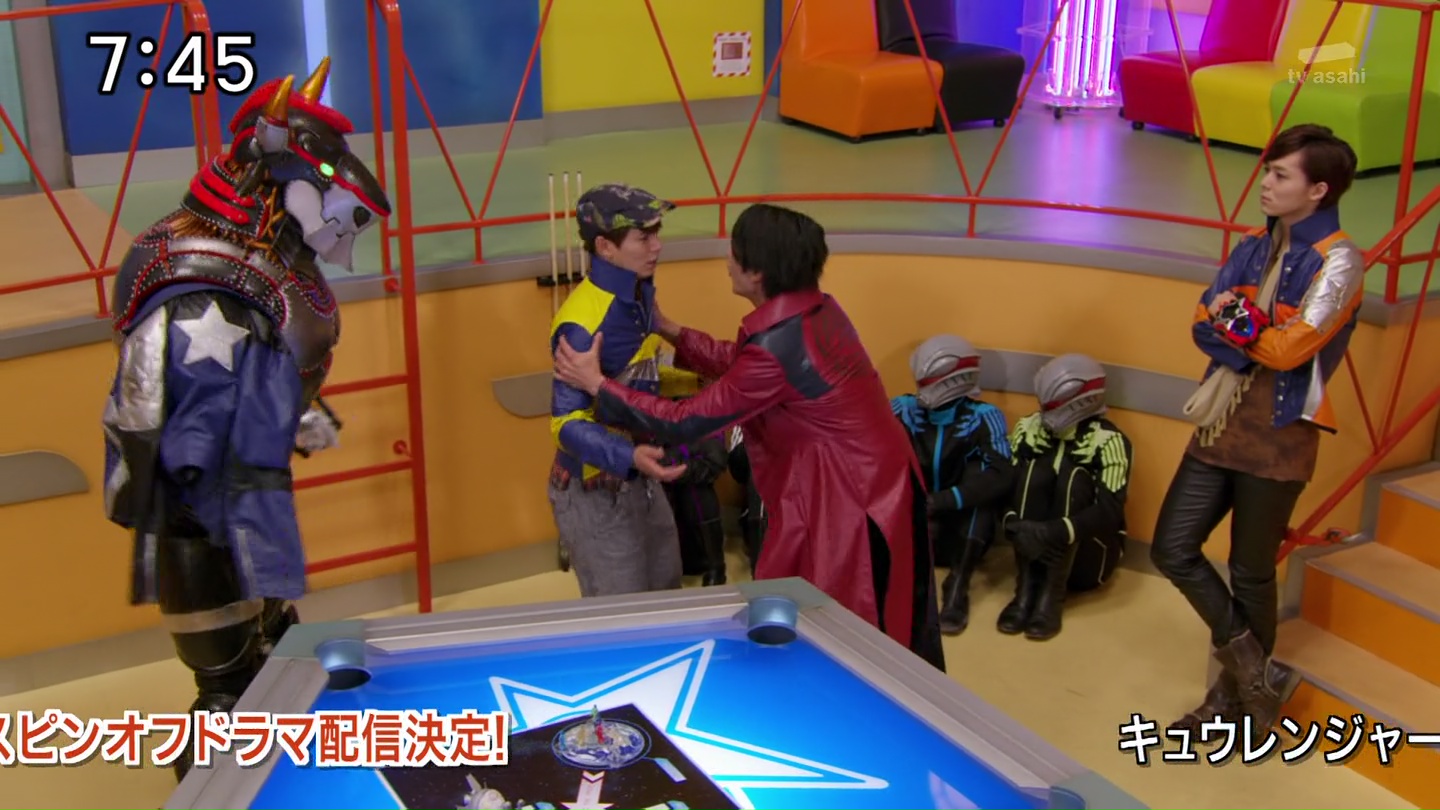 Everyone is back in the bridge. Spada thinks the Indavers are fine since they seem to have reformed. Tsurugi doesn’t believe that and says they should throw them out the hatch. Spada and Tsurugi argue. But Champ and Stinger think maybe they have some use to them.

Tsurugi thinks their naivety will trip them up someday. Some cackling is suddenly heard. It’s a fifth, red-jacketed Indaver! He has made his way to the main computer room as per orders of Akyanba to stop the Kyurangers from reaching the past by any means necessary.

While the red Indaver explains they have zero problems with their Jark Matter working conditions, the others argue about how they’ve gotten into this mess.

The red Indaver tries to get their attention.

But they tell him to shut up. He continues his explanation and says the five of them will be promoted to Tsuyoindaver if they successfully stop the Kyurangers from reaching their target date.

The four Indavers in the bridge cause the Orion to crash land. Raptor says there is minimal damage and will work on restoring the system. Commander Ronpo, Spada, Stinger, Tsurugi and Champ are down on the planet and encounter a huge dinosaur.

Stinger and Champ think the dinosaur is Don Armage, but Tsurugi says of course not and Spada says they aren’t even in their target destination era yet.

The dinosaur leaves. But the Indavers are watching from behind a tree. Red Indaver decides to use Tsurugi to divide and conquer.

Back on present day Earth, Hammie is still down about Naga. Kotaro wonders how the time travel team is doing. Garu is worried about Tsurugi’s trustworthiness, but Lucky recaps how he began trusting him lately as their comrade.

Tsurugi leads red Indaver on, but ultimately reaffirms that he is meant to create a new legend with his new comrades.

Red Indaver says they have better teamwork than the Kyurangers and they do a Jark Sentai Go-Indaver roll call. They fall over after their own roll call explosion.

Commander Ronpo steps forward and says none of them need to morph to defeat these Indavers. They do an unmorphed roll call and Commander Ronpo’s back gives out again.

Spada, Stinger, Champ and Tsurugi take on the Indavers.

They are able to knock them around pretty easily. Commander Ronpo gets up, but his back gives out yet again. Spada, Stinger and Champ check on him when suddenly Tsurugi decides to morph and finish off the Indavers with a single Phoenix End.

They head back on the Orion as Raptor gets them back on track towards their destination. They realize that the fact Jark Matter wants to stop them from doing so means there truly is something hidden in the past they must find out.

So I’m definitely disappointed that this was a clip show after last week’s exciting episode. But it’s certainly not a surprise that we’re getting one now at this point of the production calendar.

Still, I enjoyed this episode. It wasn’t a total waste. Especially that awesome, but still too short unmorphed battle at the end. The roll call and just seeing them take care of the Indavers without needing to morph was really awesome. I loved it.

I also loved seeing a little more of the Orion as well. I’ve been wanting for them to show off other parts of the ship and at least give the impression of how big it is.

The only complaints I have for Kyuranger so far this season are the cop out of staying on Earth instead of exploring different planets and meeting different peoples and not being able to explore more of the Orion. Otherwise, I’ve been loving the season.

And I think this recap episode did a nice job of showing why one would enjoy Kyuranger.

The plot of the episode itself was fine. Akyanba sending Indavers on a suicide mission is not very surprising at all. And while the Kyurangers maybe were a little too accepting of the Indavers, it would be interesting to meet an Indaver or Tsuyoindaver who actually is tired of Jark Matter and defects to the Rebellion. That would be a great story and certainly one that’s been done on both Sentai and Kamen Rider over the years. Maybe every year, really. lol

Other highlights of the episode… Stinger was pretty awesome all episode. Some random, hilarious moments of badassery from him. Lol First the wrestling hold and then this scene…

It’s even more amusing considering the big revelation a couple of episodes ago that he’s actually really shy. Haha.

Commander Ronpo (who has really become a fan favorite, I must say) and the victim of Stinger’s submission move nursing their pain together was funny. And while they included one back crack too many, the running gag was okay for this clip show. Otherwise, there’s really no need to keep reminding us that he’s old. We get it. lol

The quick check-ins to Earth were nice. I could see arguments for those short scenes as well as for them being completely unnecessary. But it’s okay. One of the plot points this episode was to get the Kyurangers to believe the Indavers wanted to join because they were jealous of the tight bond the Kyurangers have made. So it makes sense to include the Earth team as well and use that one scene to reinforce that they really do share a tight bond.

Anyway, I’m bummed we got a clip show after last week’s exciting episode. But it was fine and enjoyable nonetheless.

Oh, and I have to say, I absolutely hate toy spoilers. As hard as I try not to see any toy catalog scans and whatnot, it’s unavoidable. I’m not big on the toy collecting even though I’ll buy something from a season I absolutely love. So I’m just a guy here wanting to enjoy some colorful heroes and big robots for a half hour every week. So toy spoilers… *thumbsdown* Hmph.

Of course, I’m referring to that white Kyuranger thing that’s apparently plastered all over Toys R Us even. But I will try as hard as I can not to find out anything more.