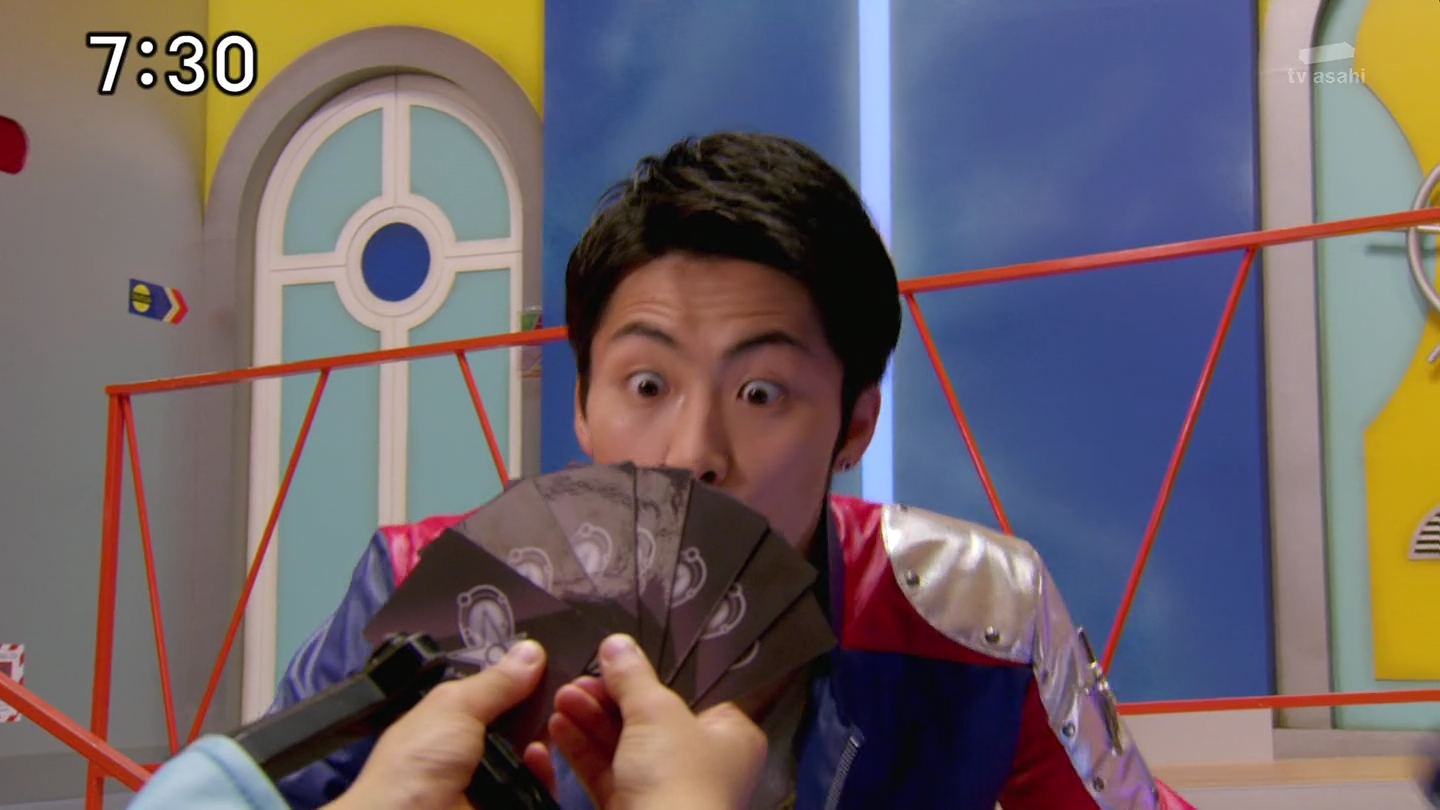 Kotaro presents everyone their official Kyuranger Rebellion Licenses. Balance asks if Tsurugi gets one, but Lucky says he doesn’t consider him a Kyuranger. Before they can debate the issue, Tecchu starts rampaging down on Earth so Commander Ronpo tells them all to deploy.

Tecchu, accompanied by Daikaan executioner and right hand man Gyapura, is completely overpowering the others as Tsurugi arrives. Gyapura wants the Kyurangers to get in his belly so they can fuse with his blood. Lucky manages to trip on the stairs which allows him to escape Gyapura’s tentacles which grabs the others into his body.

Tsurugi steps in front of Lucky and morphs, saying he will be Tecchu and Gyapura’s opponent. He mentions to Tecchu about being immortal, but Lucky remembers Eris saying he had given up his immortality in that suicide attack against Don Armage.

Lucky morphs and protects Tsurugi from Gyapura’s attack. He confronts Tsurugi about him actually not being immortal. Distracted, they are vulnerable to Gyapura’s attack. But Tsurugi pushes Lucky out of the way and absorbs the attack himself, forcing him to demorph.

Tecchu prepares to kill them for good, but Don Armage appears and tells them to fall back. Since Tsurugi is no longer immortal, they can finish him of whenever they like.

Tecchu and Gyapura retreat. Don Armage addresses Tsurugi and knows he must be surprised that he’s still alive. Don Armage mocks Tsurugi and says all he did was sacrifice his immortality and the lives of his comrades. Don Armage leaves.

The others are losing energy by the second while inside Gyapura’s body. Lucky and Tsurugi are up on the Orion. But Tsurugi is eager to go find Tecchu for some revenge. Lucky tells him to get it together and that saving the others should be the priority. 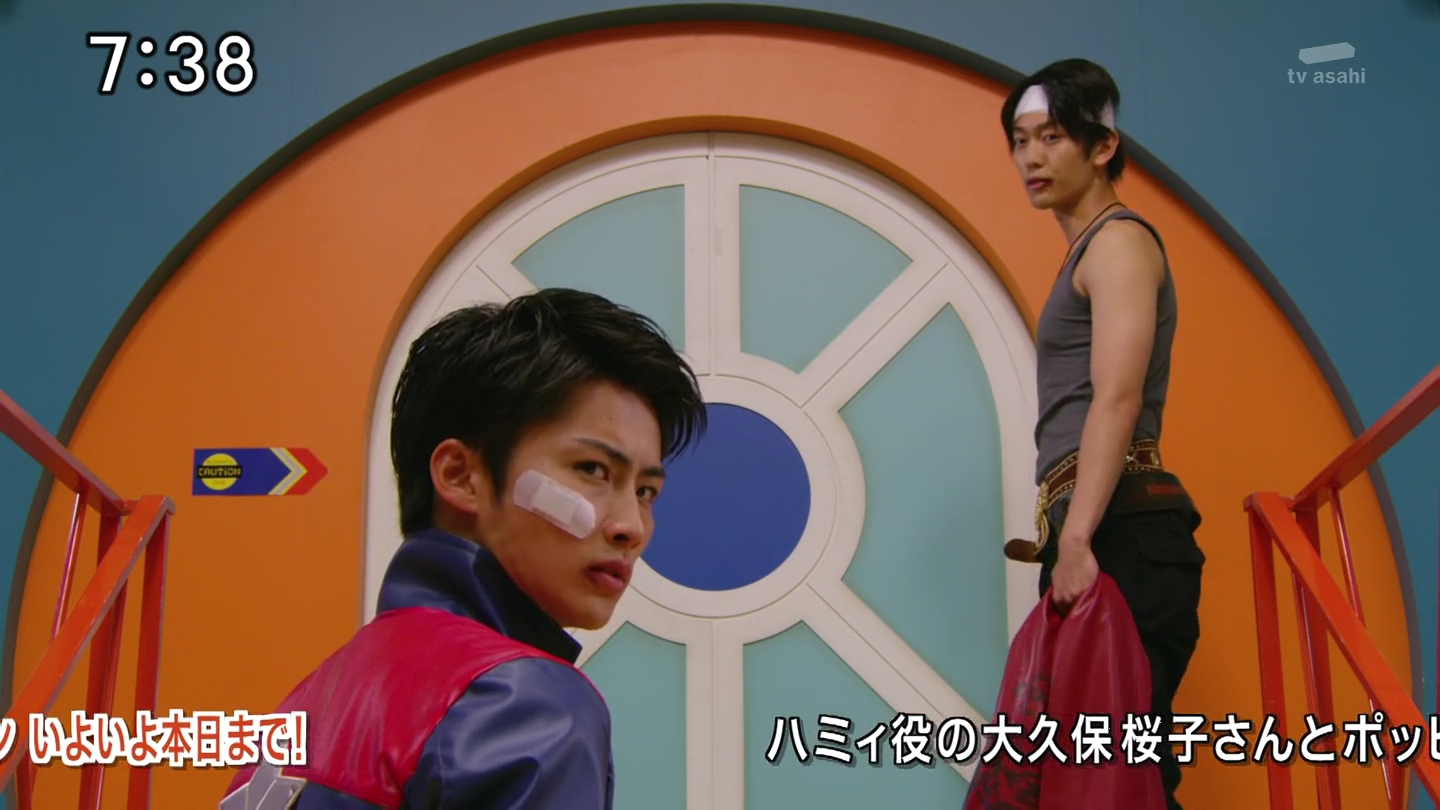 Commander Ronpo tells them comrades should not fight, especially at a time like this. But Lucky says he does not consider Tsurugi as his comrade. Tsurugi says he doesn’t need anyone who won’t be a shield for him.

Tsurugi leaves. Lucky is incensed. But Commander Ronpo says maybe Tsurugi just wants to save them on his own. He points out that his words and actions don’t always line up. Like earlier when he saved Lucky from Gyapura’s attack. Commander Ronpo thinks Tsurugi must be carrying some heavy burden.

Lucky finds Tsurugi on a rooftop and tells him that they both want to save the galaxy. But if Lucky were to be a shield for him, he has to know more about Tsurugi.

Tsurugi tells Lucky about one of his 88 comrades from the original battle against Don Armage; Quervo of the Corvus Constellation. Tsurugi asked Quervo to be his chief strategist, but Quervo insisted on fighting at least to be Tsurugi’s shield whenever he’s in a pinch. Even if Tsurugi is immortal, Quervo wants to ensure Tsurugi is protected so he can save the galaxy. Tsurugi agrees they should save the galaxy, but together.

When his comrades were falling one after the other, Tsurugi used his immortal energy for the suicide attack. It did not work. Instead, Don Armage killed almost all the remaining warriors. Tsurugi was ready to give up, but Quervo reminds him that he is his shield. He should never give up.

Quervo steps forward and, as a shield, absorbs Don Armage’s attack, dying as he saved Tsurugi.

Lucky knows Tsurugi does not want to sacrifice any more comrades, that’s why he fights alone. 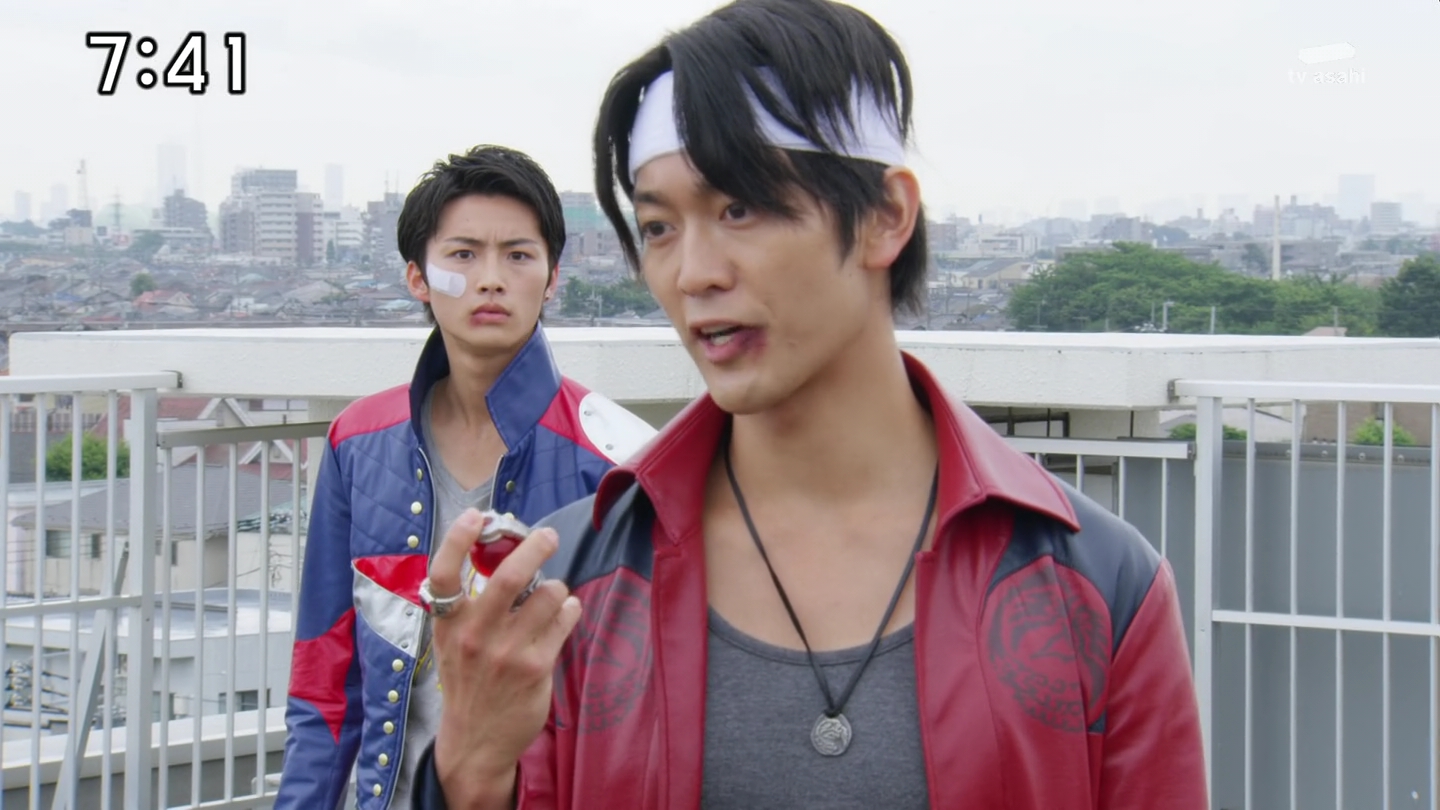 Commander Ronpo calls with the location of the others. Lucky takes out the Houou Kyutama, but Tsurugi grabs it and says he should be the only who needs to go if he doesn’t want to sacrifice any more comrades.

Tsurugi finds Tecchu and Gyapura. He morphs and they battle, but Tsurugi is quickly forced to demorph. Before Tecchu can deliver a finishing blow, Commander Ronpo and Lucky arrive. 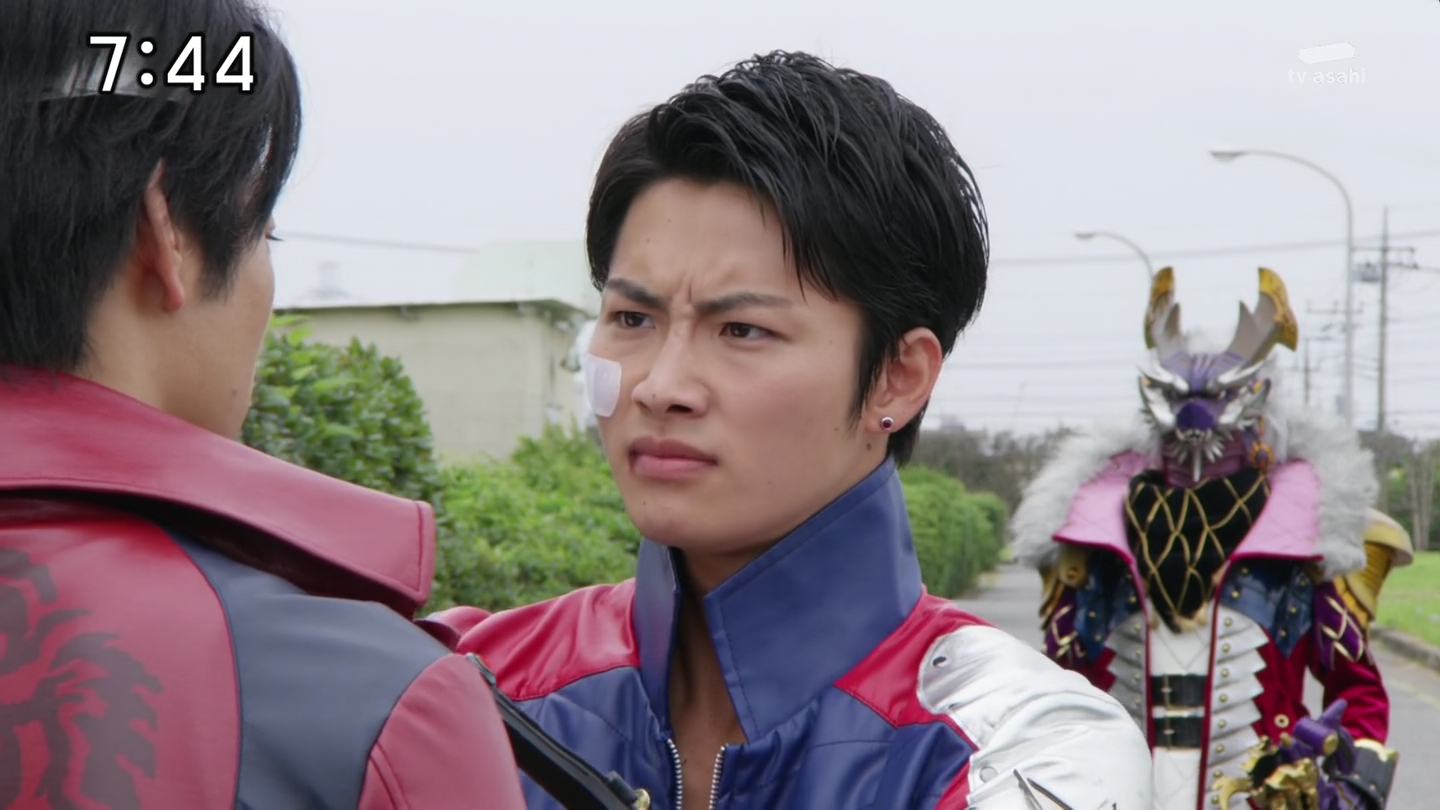 Lucky grabs Tsurugi’s collar and asks “How long are you going to fight like you’re immortal?! Cherish your life! If you die, then everyone who died for you will have died in vain!”

Tsurugi remembers Quervo’s words and says he is a legendary savior. Lucky says he is a savior as well. He is willing to be Tsurugi’s shield, but he will fight as well. Current and past saviors should work together to create a new legend. Commander Ronpo joins the savior fun and Tsurugi is finally convinced.

Tsurugi hands Lucky the Houou Kyutama back and the three of them morph.

Lucky and Tsurugi argue over who should be the fighting shield since it’s so fun. Commander Ronpo points out that they work pretty well in spite of everything. He steps forward and after a shot from Tecchu says he will take on the Vice-Shogun while the two new comrades save the others.

Lucky and Tsurugi take on Gyapura. Lucky goes Tsuki and then delivers an Eclipse attack, teeing Gyapura up for him and Tsurugi to deal the finisher.

The others are released from Gyapura. 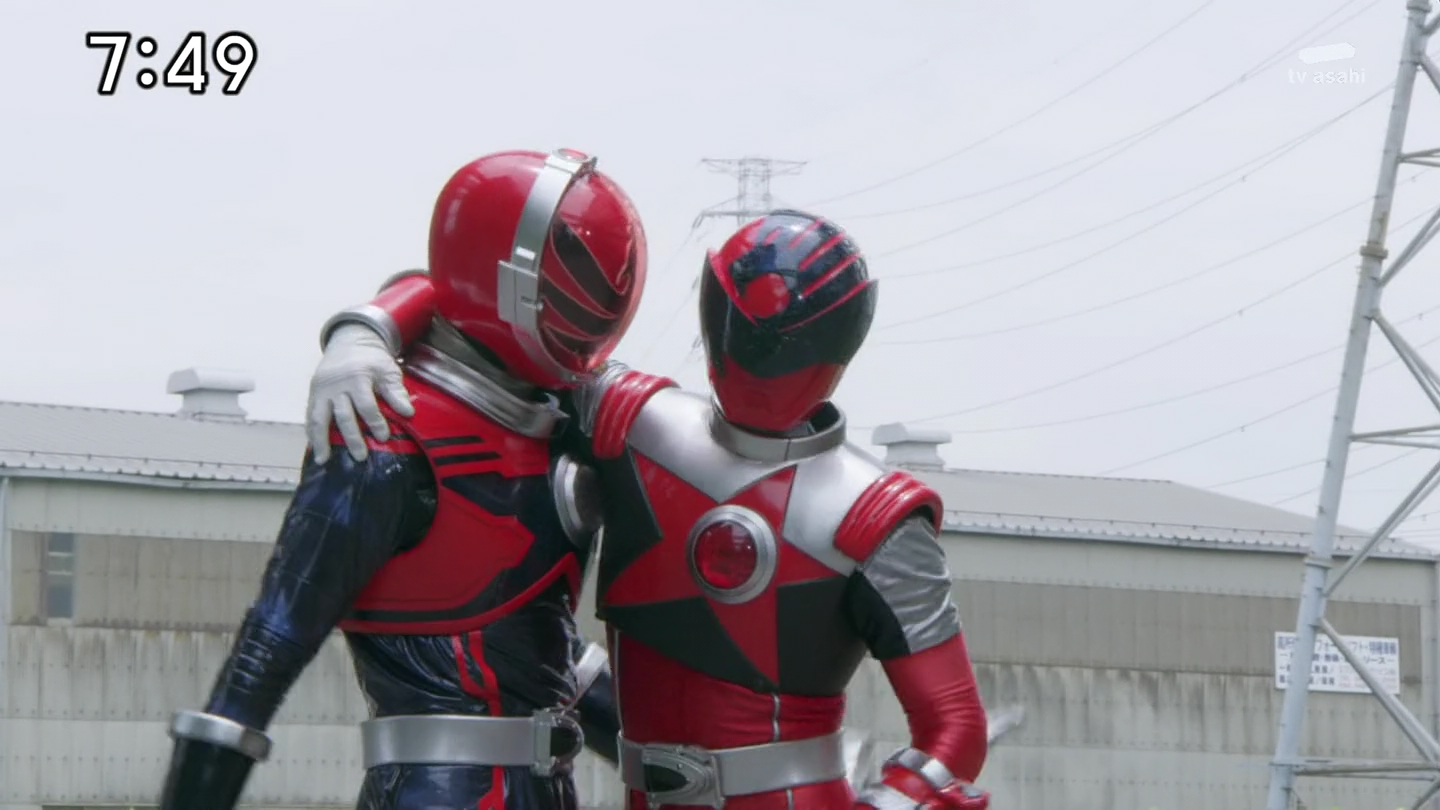 Gyapura embiggens. Lucky and Tsurugi hop in their Voyagers. But Tecchu also embiggens himself to help out. Lucky and Tsurugi are overwhelmed. The others prepare to morph, but their Kyutamas instead fly off on their own, including Spada and Raptor’s.

Lucky and Tsurugi allow the Kyutamas to do their thing and they all combine to form KyutamaJin.

The two of them decide to pilot it on their own and take on Tecchu and Gyapura. They others cheer them on as they are able to get the upper hand on their Jark Matter opponents. They unleash a Super Galaxy Meteor Booster. Tecchu shoves Gyapura in front of him to be his shield.

Tsurugi thinks it is horrible that someone who use their comrades as a shield. Lucky points out the obvious.

Back on the Orion, Lucky gives an excited Tsurugi his Kyuranger License. Kotaro asks where Raptor is since he wants to give her her license too.

Tsurugi he sent Spada and Raptor to the Planet Toki to look for the Tokei Kyutama which can control time, including going back in the past. Stinger thinks Tsurugi wants to go back in time to defeat Don Armage, but he actually just wants to find out exactly what happened in that battle.

Spada and Raptor call in asking them to quickly come and help.

Another great episode! It was definitely the episode filmed alongside the summer movie considering the absence of most of the cast. For which, I’m excited if only to see this scene and make gifs of it lol:

But WTF at Raptor not morphed in that scene with the others. Come on now. And where’s Kotaro? (I believe there’s a specific reason Commander Ronpo isn’t part of that scene.) Anyway, the movie looks great.

But back to this episode, it was still fun and exciting. It was definitely a great episode to finalize Tsurugi being welcomed to the team and resolving his and Lucky’s conflict.

I mean, you definitely have to agree with Lucky. Who the hell would want to just be a shield for some cocky “legendary” guy anyway? I wouldn’t be so willing. So Lucky’s objections were pretty valid. But of course, Commander Ronpo gets him to see that maybe there’s more to the story and there was. Tsurugi might not have gone about it the right way, but it worked out in the end. I was definitely amused by Lucky’s “You’re one to talk!” to Tsurugi when he pooh-poohed Tecchu using Gyapura as a shield.

This episode was a nice focus for Lucky too, again showcasing how great a leader he is and that he’s definitely much more than a simple catchphrase. They’ve really done well developing Lucky’s character. His words to Tsurugi later in the episode were just awesome.

I hope we get to see more of the 88 warriors that fought alongside Tsurugi. Not only because we get to meet more beings from different planets, but of course 88 people in a battle can be very exciting. Hehe. At the end of Kyuranger, I hope we get to see a similar battle or just scenes of different beings from all the planets coming together. Whether to join in the fight or just to cheer on the Kyurangers. I don’t know if they have the budget for that. But I’d love it.

Loved all the little touches in this episode. That was a lot of blood from Tsurugi! The new dramatic and action music was awesome. And it was great to see moody moonLucky again. Very fun. Also nice to have in-show speilling confirmation:

Overall, another great episode of Kyuranger. I am just loving this season so much, tbh.

Lucky’s Luckys of the Week

Recap: Avataro Sentai Donbrothers, Episode 16 – Switching to the Dark Side