While Spinferno, the next player on Galaxy Warriors, gets ready to face the Rangers, Mick and Redbot are busy in the shop paint booth successfully making Ninja Stars with the help of the Prism.

Mick and Brody introduce the Element Stars to the others (who are all wearing fancy new training uniforms). With the Stars, the Rangers can use the powers of fire, water, earth, forest and metal.

Calvin gives the water attack a try, but it backfires on him. Brody says they should try fire next, but no one wants to take the chance just yet. 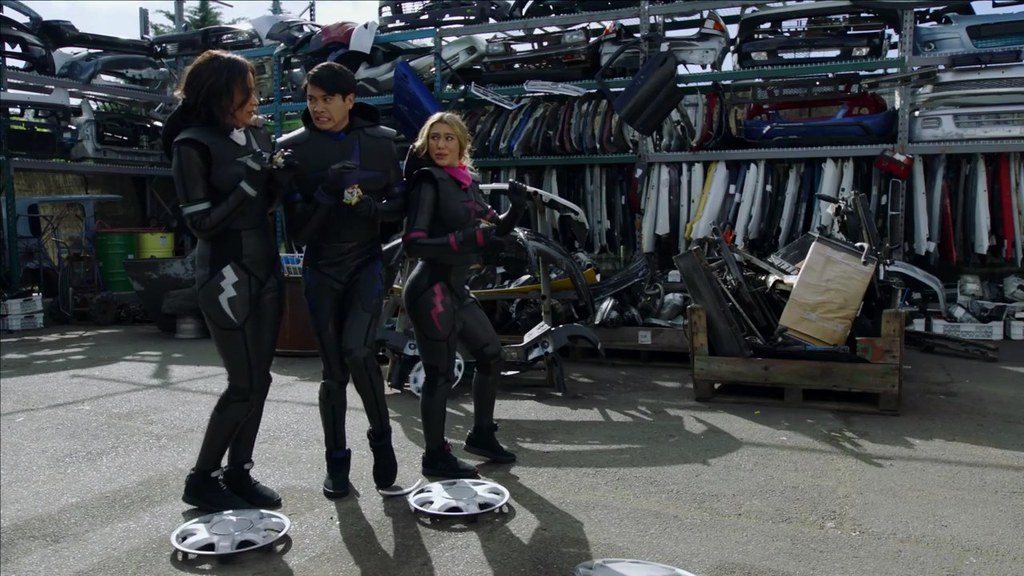 The Rangers are back at their command shop as school is about to start. Preston lends Brody a backpack, but it has a hole in it. Brody says it’s perfect. But while the others go to class early to study for the quiz, Brody gets an alert on his datacom announcing the new Galaxy Warriors that’s about to start at Summer Cove Plaza. Brody doesn’t want to interrupt the others studying so he goes by himself.

Brody uses his datacom to ask Computer how to fight Spinferno and is able to force him away.

Brody returns to class just as everyone is watching a video of the battle that’s gone viral. The others question why Brody went at it alone instead of letting them know so they could all go. Brody says it’s alright. Victor, however, is jealous of all the views.

Mrs. Finch arrives and lets Brody introduce himself for 2 seconds before getting to their quickfire quiz. The class is split into teams and Brody uses his datacom to answer all the questions. He doesn’t think there’s anything wrong with it.

“So much for teamwork.”

An annoyed Vincent sees Brody using the datacom and tells Mrs. Finch who thinks it is so absurd. Brody puts the datcom in his backpack, but it falls out through the hole after class. Victor picks it up and asks it how to become more popular than Rangers. Computer says to defeat a monster.

The others try to explain to Brody why the datacom is not to be used all the time. Preston comes to tell them Spinferno is back. But Brody only now realizes his datacom is gone. He tells the others to go ahead so he can go look for it.

Victor and Monty are actually the first to face Spinferno. Monty films while Victor fails with a fire extinguisher. Spinferno shoots the datacom off Monty’s wrist and sends both him and Victor flying.

Preston, Sarah, Zoe and Calvin arrive to take on Spinferno.

Back at school, Mick appears out of nowhere while Brody continues looking for datacom. Mick tries to get Brody to realize that he doesn’t need the datacom to be a great leader.

Brody realizes his mistake and hurries over to the others. They all decide that the only thing they need to fight is in their hearts, no Computer needed. Brody morphs and they do their first roll call.

Calvin challenges Spinfire to a race and he is able to get the hang of the water attack. He leads Spinfire right into their trap where the others use a forest attack and then a Final Strike to finish him off.

Cosmo Royale asks the audience if they should give Spinfire another chance, but Spinfire gets a big “X”. Instead, Cosmo Royale summons a gigantified Skullgator.

The Rangers summon their zords and Brody suggests they combine them into the Ninja Steel Megazord. They get into the cockpit, but it doesn’t seem to be energized. They find Stars in the cockpit and they use them to upmorph to Ninja Master Mode.

That seems to get the Megazord going.

“Being a Ranger keeps getting better and better!”

After a little battle, the Rangers deliver a Master Slash and the “show’s over.”

Galvanax is obviously upset. Cosmo Royale says the crowd loved the megazord. Of course, Galvanax says,”It’s amazing, but it defeated us, fool!”

Galvanax threatens to fire everyone if they send him another loser.

Brody meets the others at the school pool table and apologizes for relying on his datacom instead of his friends. To make it up to them, he and Mick made Ninjacoms for them to be able to connect with each other. Teamwork!

Victor and Monty arrive just as everyone at school is watching a remix of Victor’s hero fail earlier. Turns out Monty edited and uploaded it. He tries to apologize, but Victor actually loves it because the video now has more views than the Power Rangers!

Interesting! I thought this was a good episode. It was definitely more calm than the first two and is probably more illustrative of what most of the season will be like. I do think it should’ve had a little more of the training stuff, but I guess the episode was used more to establish the school side, including the spiffy new hidden base.

The training uniforms look amazing. (I want one!) But at the same time we don’t know where they came from. It almost felt like there was an episode missing in between the 2nd and this one. I definitely hope we see Brody training the others in future episode. But also in a way where he hasn’t automatically inherited his father’s “greatest (last?) ninja” title. Having the Rangers not perfect and still learning as they go is always good to watch.

I definitely enjoyed seeing this scene brought over to Ninja Steel:

The original Megazord cockpit looks like a typical Saban Brands Era-cockpit. Same with Master Mode, though I think it looks good.

Ninninger‘s episode was a kinda sorta-Nagi focus episode. Ninja Steel‘s was more a Brody focus. So if we’re talking about differences (and I’m not sure I’m doing that specifically this season), this was definitely a more original episode. With using the Ninninger footage however, I felt a bit of the contrast.

Like, it’s been a while since I saw Ninninger Episode 3, but I could easily tell which was Sentai and which was new NZ footage. I could especially notice the Yellow Ranger being very Nagi. And I don’t think Calvin has really shown (or even gotten a chance to show) much of his own personality yet to decide if it’s in contrast with Nagi’s more youthful vibe in the morphed scenes.

It was also interesting to see the Ninninger role call alongside the Ninja Steel morphing sequence.

Anyway, overall this was a good episode. Very enjoyable.

0 thoughts on “Recap: Power Rangers Ninja Steel, Episode 3 – "Being a Ranger keeps getting better and better!"”