Why Does AXN Not Want People to Watch The Amazing Race Asia 5?

So, this actually isn’t a recap of Episode 4 of The Amazing Race Asia 5. And that’s because I’m not sure I’ll be able to watch it.

Posting full episodes on your official websites and/or YouTube (or Sohu) channels and making them available, without geographic restrictions, worldwide is truly amazing. And millions of fans and viewers around the world are very grateful.

CBS and CTV make episodes of their own Amazing Race franchises available to people in the United States and Canada, respectively. Though geoblocked, at the very least, fans in those specific countries can catch up on their show if they needed to.

Which brings us to The Amazing Race Asia and AXN.

It was a very exciting surprise when AXN announced The Amazing Race Asia would be resurrected for a 5th season after a long six year absence. Fans in Asia and beyond were looking forward to the return of the series, especially with The Amazing Race US on its own indefinite hiatus.

But that excitement has pretty much been stomped on by AXN’s inexplicable decision not to post full episodes of The Amazing Race Asia on their own website. Worse even, posting the season’s first two episodes only and then deciding not to post any more.

Here’s a few of the responses from the official Amazing Race Asia Facebook page:

And Allan Wu himself: 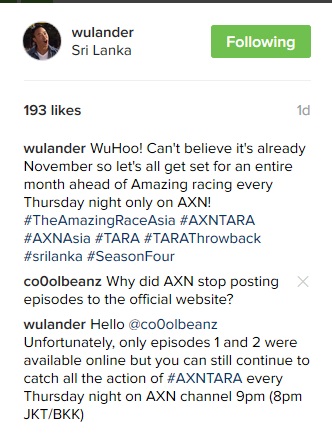 Including in reply to season 4 winner Richard Herrera: 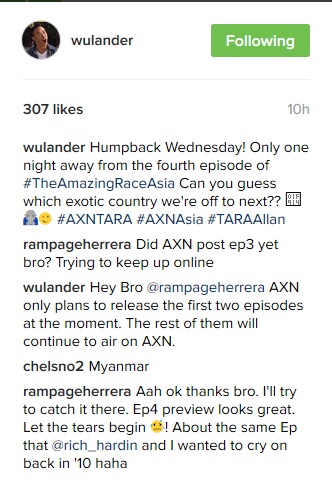 If you look on their official Facebook page, YouTube channel, on the show’s and Allan Wu’s Instagram and on Twitter, there are dozens, hundreds (and more) people asking why Episode 3 had not been posted to the official website like the first two episodes had. And the only response is “Watch on Thursday and/or the encores only on AXN. Bye!”

Okay. A few problems with that. Let’s forget all the international Amazing Race fans outside of AXN Asia’s availability.

According to a news report/press release, the premiere of The Amazing Race Asia 5 was the most watched English-language original program ever to air in Asia. Or something. Great! And that was only people watching on TV. But then there were many more who watched the show for the first time on AXN’s official website.

The fact is not all Amazing Race fans or potential viewers in Asia have access to AXN. It is a pay-TV, cable/satellite channel. Meaning, it’s not free. It’s only available on cable or satellite TV packages in which people pay extra to access more channels, AXN included.

I mean, it’s pretty crazy that one of the season’s strongest teams (Tom & Anita) can’t even watch the show in their home country Thailand. Here’s some of Tom’s tweets: 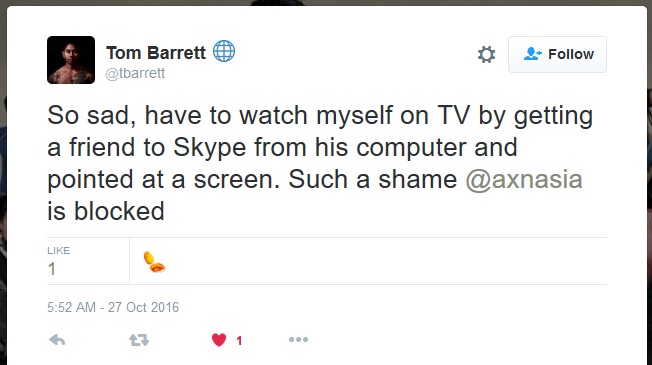 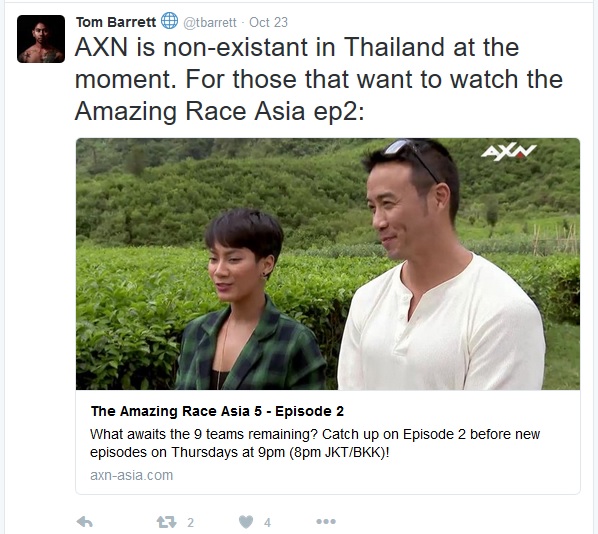 So what possible reason would AXN have to basically prevent people from watching their own show?

Let’s take a look at some of those reasons.

That doesn’t mean online sources aren’t profitable. Especially when networks and production companies are making content available through official channels as opposed to regular people recording and uploading their content to video sites and torrents.

So what’s the argument against AXN posting full episodes of The Amazing Race Asia on their official website? Nothing really. For one, not everyone is going to be at home to watch on AXN on TV on Thursday nights or any of the encore airings over the weekend. So why not make it available for those people?

Maybe a person who regularly watches on TV misses it one week. And if they haven’t seen that episode, they may not be inclined to continue watching the rest of the season.

But if it’s all about money. Well, if you don’t know how to monetize your official network website… what are you doing with your life?

I mean, I highly doubt people at Sony… Sony! don’t know how to make money. Come on now.

They can still show ads, whether the video is being hosted on AXN-Asia.com or YouTube. Simple. And if they don’t want people outside of AXN Asia countries to watch the show (which is also inexplicable), then they can block them. Just like they did with the episodes they did post to their official website.

AXN doesn’t have the rights to put the episodes online. Apparently, there’s a “rights issue” that prevents AXN from putting them online.

Rights? You OWN the show. It’s being produced by Bertram Van Munster’s own production company. Who’s preventing AXN from posting episodes of AXN’s show on AXN’s official website?

If a local Asian network has rights to the show in their country, then the episode on AXN’s official website can be blocked in that country. It’s pretty simple. Especially for a network owned by Sony. I think Sony knows a thing or two about technology.

There’s really no downside to posting full episodes to AXN’s official website. If anything, there’s plenty of upside.

Well, Indonesia will certainly have a hard time attracting those potential foreign tourists when their expensive commercial (The Amazing Race Asia) isn’t even available for those people to watch and see.

The Amazing Race Asia is also an entertainment program for entertainment channel AXN and its production companies. And it’s a program that’s being produced to make a profit. But there won’t be any profit if no one is watching.

And we’re back to the main point of this recap rant.

Being inaccessible to your audience and preventing your audience from watching your show is a pretty easy and quick way to toss the show back in a grave again.

But if that’s the ultimate goal for The Amazing Race Asia, they’ve certainly set themselves on the right path.

And that’s a shame when the actual content, The Amazing Race Asia 5, has been very good. Too bad only a few people will get to see it.

178 thoughts on “Why Does AXN Not Want People to Watch The Amazing Race Asia 5?”