After Takeru absorbs the huge Adelmaizer attack, Alain whisks everyone back to the temple.

Aria watches as Adel thinks about everyone questioning his father’s original ideals. The Ganmaizer annoys Adel by repeating Takeru is the key.

Everyone gathers around Makoto’s bedside like he’s dead or something, but he’s just sleeping. Akari asks Edith for answers. He tells them about the Deep Specter Eyecon and how the clone must have something to do with the Ganmaizer. Edith says that while he is responsible for creating this, Makoto chose this path himself.

Next morning, Takeru gets the feeling. He and Alain head to the river where they face Adel. They all henshin and battle. 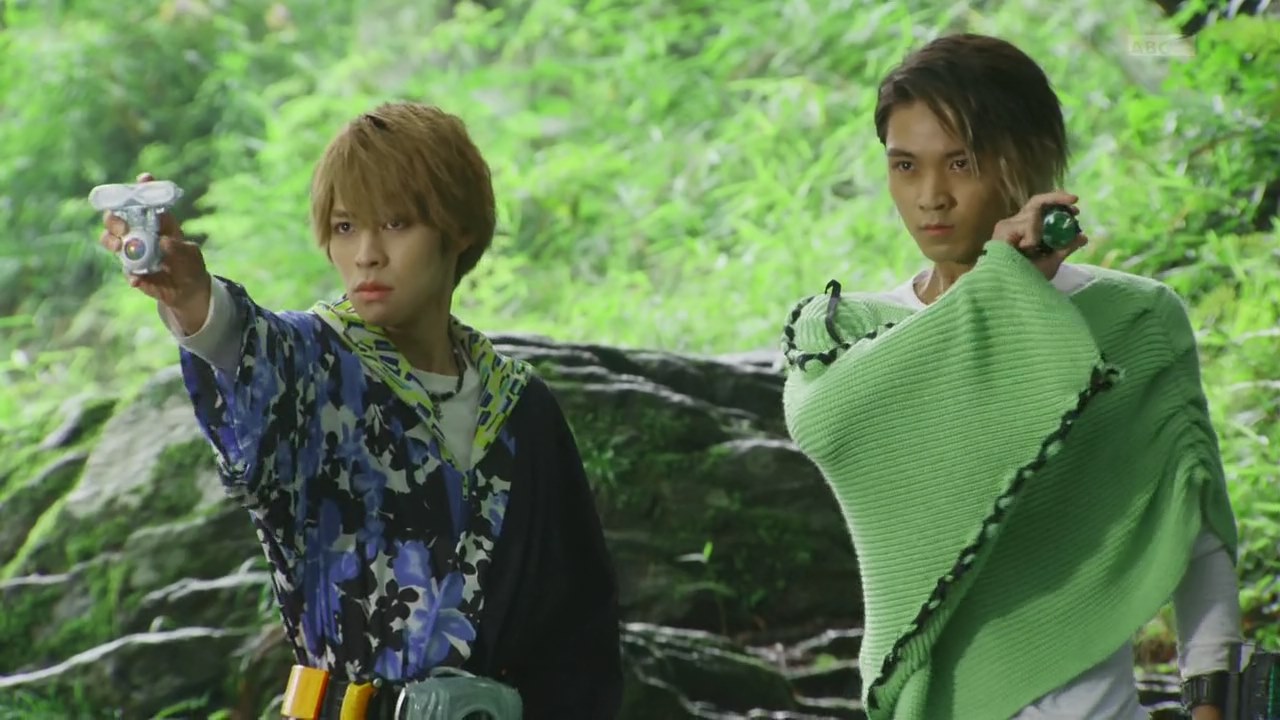 Alain goes Sanzou and his bird friends pop out to help. He tries to get Adel to wake up from his madness, but Adel just knocks him around and wishes Alain dies.

Alain tries to explain humanity to Adel, but Adel just wants his perfect utopia. He reaches in and forces Alain to dehenshin.

Alain grabs Adel’s leg and asks why he killed their father. Now he is alone and no one can live alone. Adel just thinks Alain is an irrelevant weakling and kicks him into the river. Takeru hurries over to Alain as he loses consciousness. Edith watches as Takeru absorbs another Adelmaizer attack, forcing him to dehenshin as well.

Before Adelmaizer can deliver a finishing blow, Edith henshins and whisks Takeru and Alain back to the temple. Edith’s Eyecon bursts from the huge attack.

Takeru wakes up in the lab with Akari, Onari, Narita and Shibuya tending to him. Yurusen is smelling Alain next to him.

Takeru is worried about Edith bursting. But he pops out of a fresh Eyecon saying his real body was hidden in a safe place, thus, he’s immort…

Everyone pauses. Kanon helps oniichan down the stairs. Alain wakes up. Yurusen tells him not to look.

Yurusen floats over to Edith and says he’s wearing the wrong clothes. Oops!

Edith/Grampa Sennin tries to use some aegyo, but the awkward silence is just too much.

Meanwhile, Adel unsuccessfully continues to try and connect to the Great Eye. Aria says he’s clueless. The reason why Adonis kept him away from the Prayer Room was because he was afraid Adel, who sincerely believed the utopian ideals, would cause a huge disaster if he connected to the Great Eye.

But Adonis did not hate him. Aria tries to say that Adonis loved him, but Adel doesn’t want to hear any of it. To make matters worse, the Ganmaizer repeats that Takeru is the key and that he’s actually still (relatively) alive.

Back in the lab as everyone reels from the incredibly shocking revelation, Sennin apologizes for deceiving them. But Akari steps forward and just wants an explanation, especially on how to save Takeru. Sennin says when Takeru survived the first 99 day countdown, he went beyond what his powers could do. Akari realizes that Sennin could’ve brought Takeru back to life himself in that first 99 days.

Grampa Sennin confirms that and says he is not sure about Takeru’s current state or whether he even really can come back. He bows his head to apologize.

Akari recounts the three times she saw Takeru die and how painful they all were. She will use those feelings to find a way to save Takeru for sure this time. Onari agrees and says an apology from Sennin won’t do that. Takeru is taken aback as Narita, Shibuya and even Kanon join in on piling on Grampa Sennin.

Takeru did not realize everyone was so worried about him to provoke this kind of anger now. He apologizes to everyone for being so dense. He recalls seeing Igarashi’s memory and how Grampa Sennin had the same determined expression as everyone in the room wanting to protect this word. It was sincere.

Makoto adds that he was able to survive in the G World thanks to Gramps.

Takeru says Sennin was able to help Takeru connect with souls and people. And for that he is grateful. Grampa Sennin is in turn grateful for Takeru’s words.

Beethoven sucks Takeru into the Eyecon. Takeru says he understands that anger can also be a nice motivator. But Beethoven cautions that it could also cloud judgment. Takeru smiles and says he’ll figure it out.

Takeru asks Sennin to lend him his power and to believe in human potential again. Akari puts her hand out for Sennin and they shake on it.

Takeru touches Sennin’s hand and of course that means a memory flash. He sees Sennin admitting to Papa Tenkuuji that this is all his fault. Takeru understands.

Yurusen pops in to say Adel is back, so everyone rushes out.

Takeru and Adel henshin and begin to battle as everyone else watches.

Takeru tries to reason with Adel. But Adel says his goal is to fix imperfect worlds, especially ones being destroyed by horrible humans. Indeed, Takeru admits, humans are imperfect. But they can still have faith in infinite potential!

Takeru manages to send a Convictions Impact at Adel which forces out and destroys one tabletmaizer.

Takeru continues to defend humans while drawing out and destroying more tablets.

His friends cheer for him.

As the back and forth continues, Edith Sennin suddenly recognizes Takeru’s familiar words. Line-for-line, things are playing out exactly as they did in the past. Takeru and his father vs. Adel and, back then, Grampa Edith himself.

With a God Omega Drive, Takeru seems to have taken care of Adel’s power up.

Sennin remembers having lost to Papa Tenkuuji, acknowledging he has lost to a human. Ryuu held out his hand and asked Sennin to fight alongside him.

Takeru does the same to Adel who seems to have realized just what human potential is really about. Only… nope.

Akari says it’s alright. She is sure Takeru has connected with Adel. Sennin happily agrees.

Takeru asks his friends to lend him their power.

While Onari and Yurusen bicker, Edith Sennin says he likes this world very much. 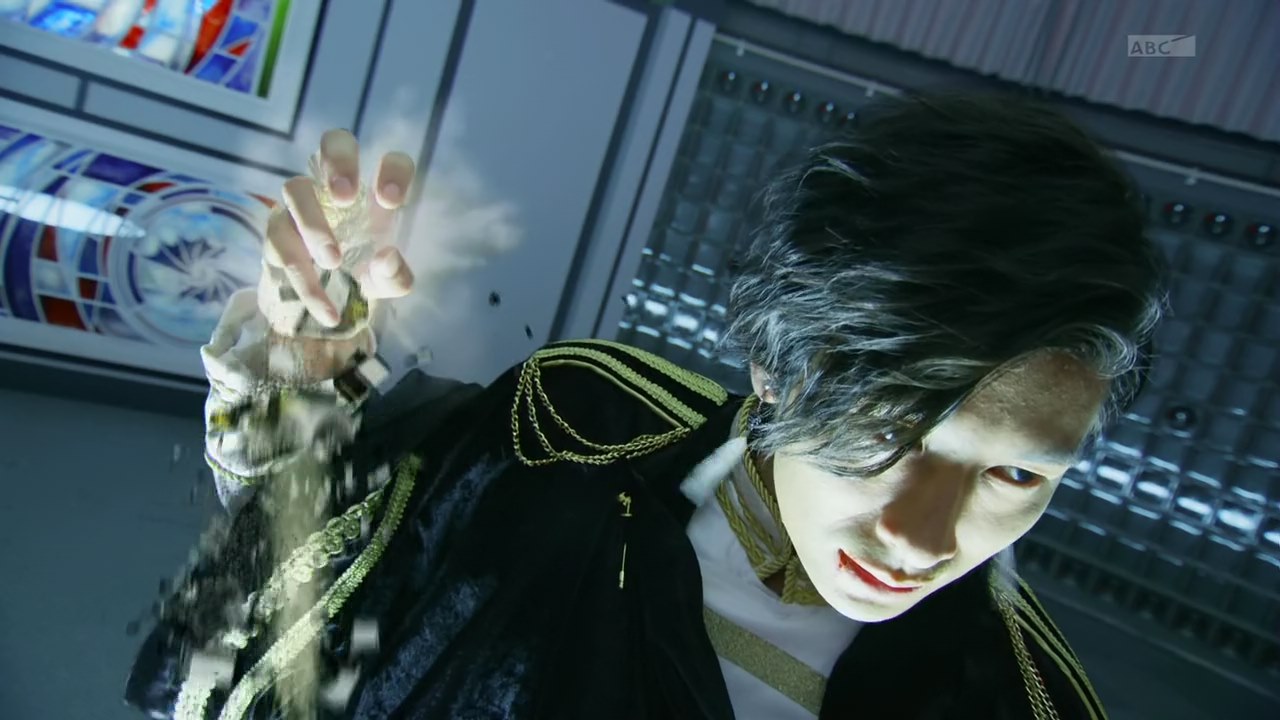 Back in the G World, Aria watches Adel return. He says he no longer wants to create a perfect world. Instead, he wants to BECOME the world. 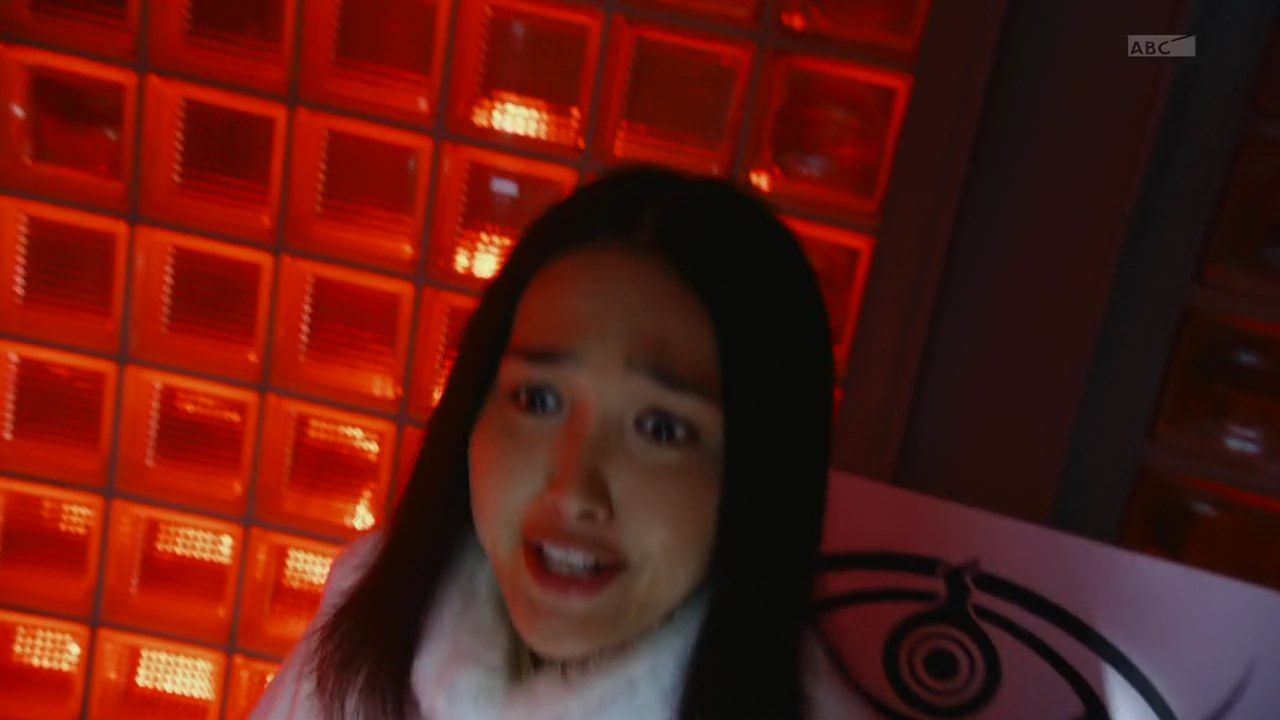 Aria watches in horror as Adel yanks an Eyecon out of his person and destroys it, thus himself as well.

In some alternate universe, Takeru falls into an Eyecon planet where he comes face to face with this: 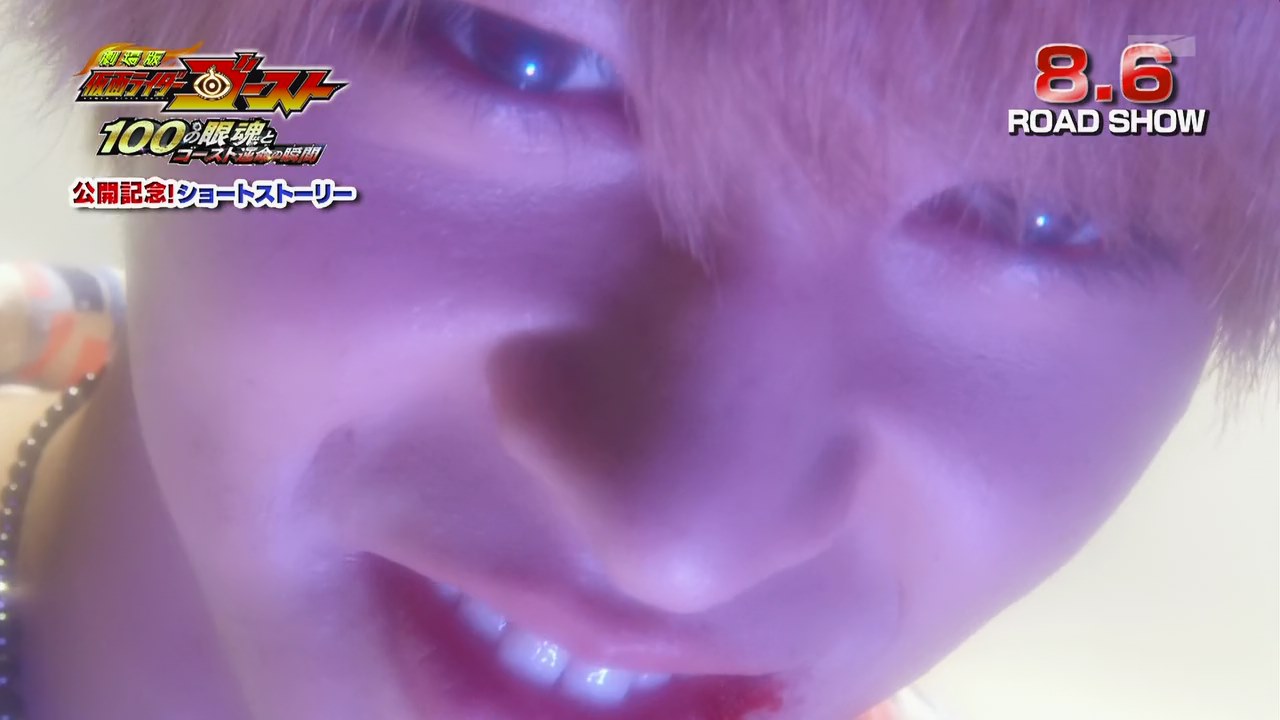 So, this episode wasn’t as lifeless as recent weeks, at the very least.

I think Adel could’ve been a really more epic villain if the show had laid the groundwork for him and all these utopian ideals much earlier than they did. We didn’t even know what the Ganma were (actually, we still don’t) and where the villain aspect of the season was going.

Anyway, we’re here now. And the objective is to get Takeru his mortal life back while stopping Adel from poking eyes out.

Of course, the most important part of this episode was finally the confirmation that Edith and Grampa Sennin are the same person. And I think everyone had the same reaction as these guys:

I know I did. It wasn’t a surprise at all. And I don’t think the show meant for it to be a surprise anyway, judging from the very-meta reaction by the gang.

But at the same time, I actually felt sorry for Edith Sennin when everyone started piling on. He looked so kawawa and pitiful. I was very surprised I felt that way since Edith Sennin may have been the most consistently random characters of the season.

He certainly was no DJ Sagara/forest spirit thing. Some of it maybe flew right over my head. But basically, I assume Edith defected from the G World and has been working secretly to power these chosen humans to destroy what he created for fear of it falling into the wrong hands.

That’s a little weird considering what we’ve seen from Edith these last few episodes, especially since we are to believe what he’s saying to himself when alone are his true feelings. At the same time, we did regularly see Sennin surprised at Takeru’s various deaths and resurrections.

So for now, I will believe he’s now #TeamTakeru with no other plans or ulterior motive. Though that could certainly change with a couple of episodes still to go.

Overall, there were some nice action scenes and actual movement in what’s being passed off as a “story.” That’s an improvement over the last few weeks.