Takaharu wakes up at the dojomanse. Father carried him home after Grandfather knocked him out.

Father is surprised when Takaharu tells him about the Last Ninja rule.

Meanwhile, Kyuuemon sends Gabi Raizou out and into an Advanced Youkai Oboruguruma. Thinking Takaharu is still doing the test with Grandpa, the cousins henshin and hop into ShurikenJin and Bison King.

But Takaharu arrives and they hop into Gekiatsu Dai-Oh. They manage to take down the Oboruguruma and Gabi Raizou retreats.

Takaharu tells the others about what happened with Grandpa. They say they would’ve given the same answer as Takaharu about not killing Grandfather.

Kyuuemon arrives, laughing and introduces himself as Kibaoni Kyuuemon Shingetsu. He explains how he used them and the Last Ninja to revive daddy Gengetsu, including how he exploited Grandpa’s lack of trust in them.

Kyuuemon says Grandpa was afraid that telling them the truth about the Last Ninja rule would discourage them from attempting to become it. And of course, none of them have the guts to kill him, thus none of them will become Last Ninja. That leaves it open for Kyuuemon to take the title and the Finishing Shruiken of the End for himself.

The Ninningers henge, but Kyuuemon reminds them he was trained in Igasaki style by easily countering their attacks. 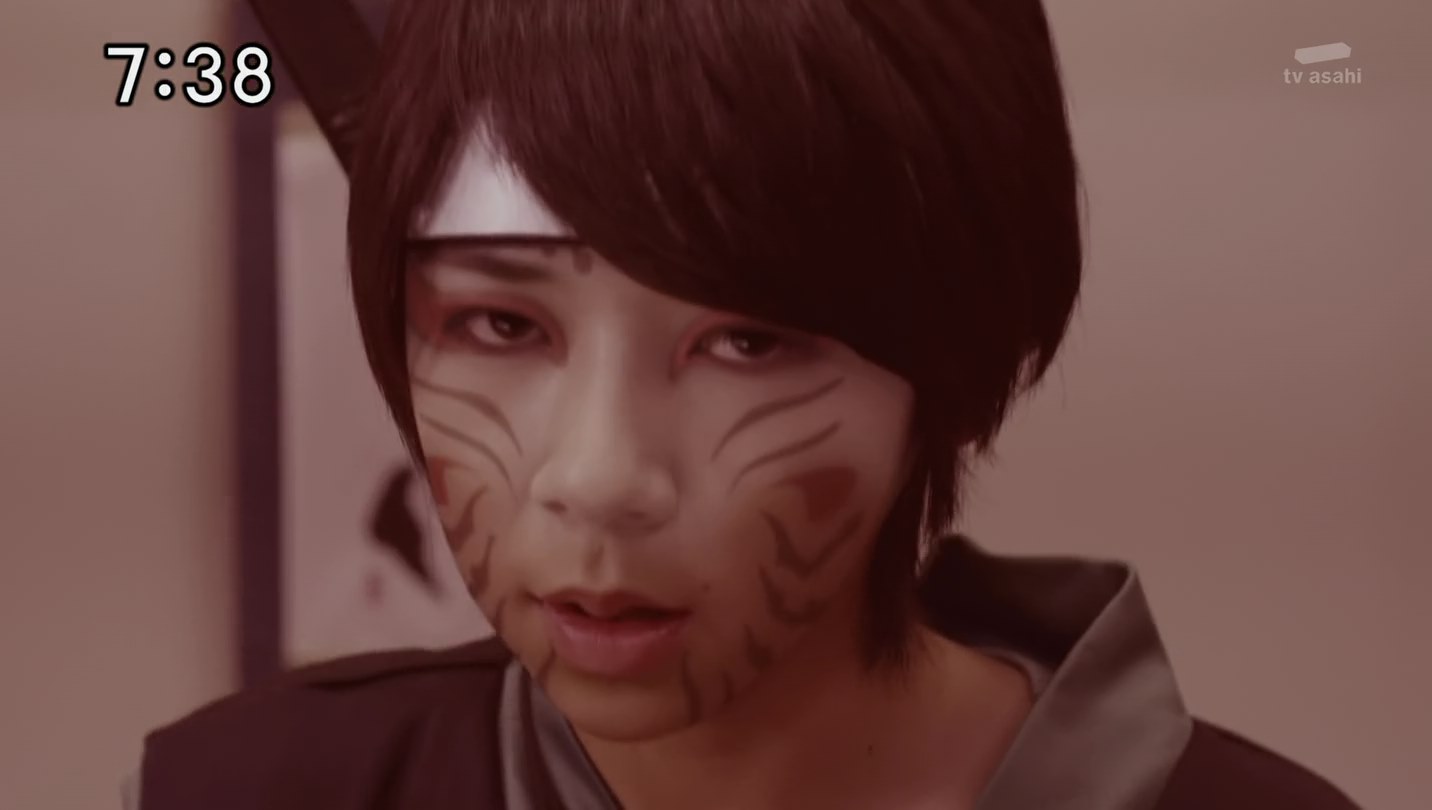 Kyuuemon flashes back to him originally taking the mallet and “forbidden” Shuriken. Grandpa tried to take it back, but only got the mallet while Kyuuemon took the Shuriken.

Kyuuemon tries to deliver a Crossfire Technique on them, but the Ninningers escape for now.

The Ninningers return home and ponder their seemingly impossible predicament. They wonder if they really have no options left. Kyuuemon gave up his humanity, after all, just to reach this point. Kinji thinks otherwise.

He tells them about his encounters with Kyuuemon who saw the weakness in his heart. Kyuuemon must have been able to feel it because he has the same feeling. Kinji is not sure, but they might be able to exploit that to their gain,

Kinji says he wants to repay them for saving his life many times. This time, he will save them. Father says he will help by looking around the dojomanse for any clue Grandfather might have left them.

Next morning, Grandfather goes to confront Gengetsu at the castle. Gengetsu hops out.

Grandpa says he only had enough power to seal Gengetsu before, but now is ready to defeat him once and for all. Gengetsu is confident that today will be the day the Kibaoni Clan will take over the world and destroy the Igasakis for good.

Grandpa says he will settle this himself without involving his family.

Grandpa charges at Gengetsu who counters with a blast.

The cousins hear the explosion, but Kyuuemon stops them. They henge and take on Kyuuemon.

Father has turned the dojomanse inside out looking for any clue, but not finding anything. He turns to the only place he hasn’t looked yet, the tanuki by the wall. He rubs his stomach and picks it up. There’s something inside. 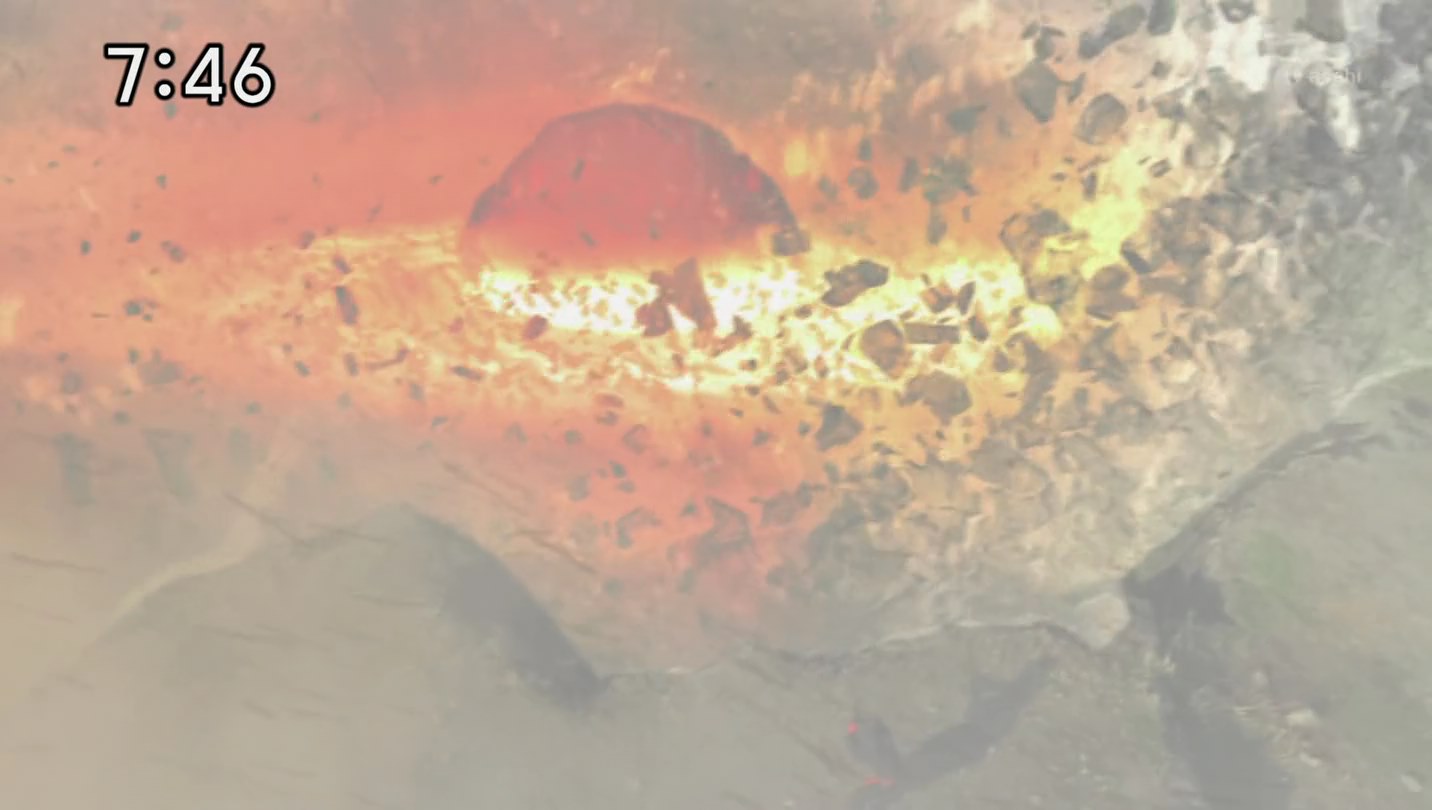 Grandpa and Gengetsu are engaged in a huge, explosive battle. Grandpa uses every Ninpou he’s got up his sleeve. Huge explosions, thunder, wind, fog, all elements. Mountains are blown to bits. Craters are made. Fireball nuclear explosions.

Gengetsu is impressed, but he also has some big power stored. He completely eliminates all of Grandpa’s attacks with the wave of a hand.

The Ninningers are engaged in their own explosive battle with Kyuuemon in the Toei warehouse. It’s a well matched fight until Kyuuemon is able to take all six of them on and eventually knocks them down.

“I already told you! You’re nothing compared to me!”

Kinji answers. “That’s true. We’re nothing like you.” He says having darkness in one’s heart makes it easy to be tempted by power. That is Kyuuemon’s weakness.

Kinji gives Takaharu the Gekiatsuto and turns himself into a Shuriken using Nagi’s Possession Fusion Technique. Takaharu uses Shuriken Kinji as a weapon against Kyuuemon. 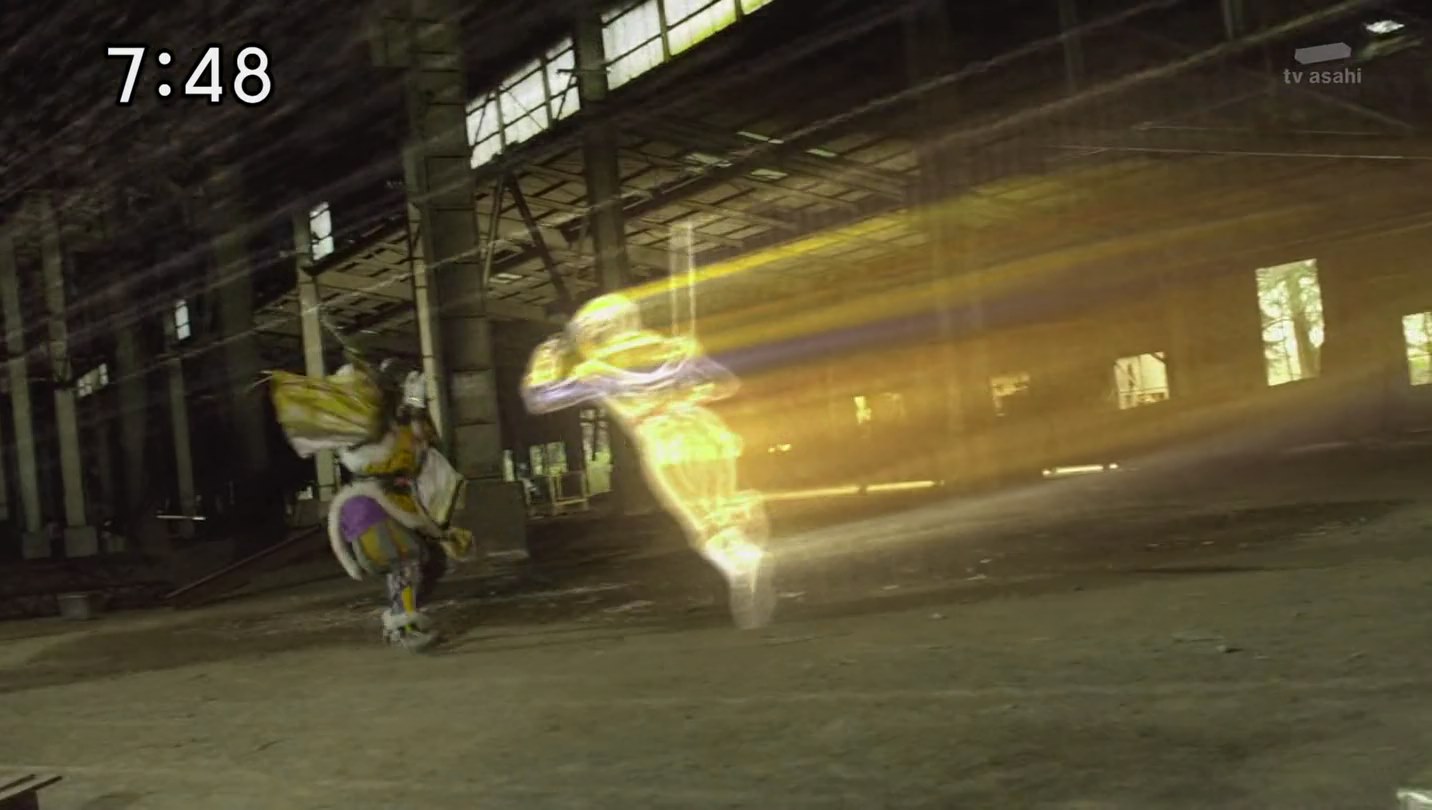 Kasumi says this is definitely not their Grandpa’s Ninpou. They have truly created their own path. Fuuka says they will become the Last Ninja their own way.

Kyuuemon thinks they’re fools living in a dream world. But they remember what Father told them. You can never easily see the path to your dreams. That’s why you must open and light your own path to them.

Father arrives just as the Ninningers get their second wind. They charge at Kyuuemon who doesn’t understand what’s happening. They cousins explain that Kyuuemon is stuck in the old times while they have learned how to forge their own way.

Kyuuemon will not have any of this talking down. But the Ninningers unleash a Shocking Explosive Slash together.

Somehow, that attack releases Father’s Nintality from Kyuuemon. Takaharu tells his father to proudly take back what’s rightly his.

Father steps forward and declares himself a Ninja once more as he finally gains back his Nintality.

Gabi Raizou arrives to whisk his young master away despite Kyuuemon wanting to stay and enact his revenge.

They head outside and Father thanks them for getting his powers back. But the Ninningers thank him for teaching them about dreams and helping them be resolute in their battle.

Takaharu tells Grandpa that while they did not have the resolution Grandpa wanted, they have gained the resolution to forge a new path and legacy for the Last Ninja.

Grandpa likes what he hears. He tosses Father an Ichibantou and Takaharu gives him the new Shuriken… a Tsumuji Shuriken.

Grandpa jumps up to the cliff to join his family. 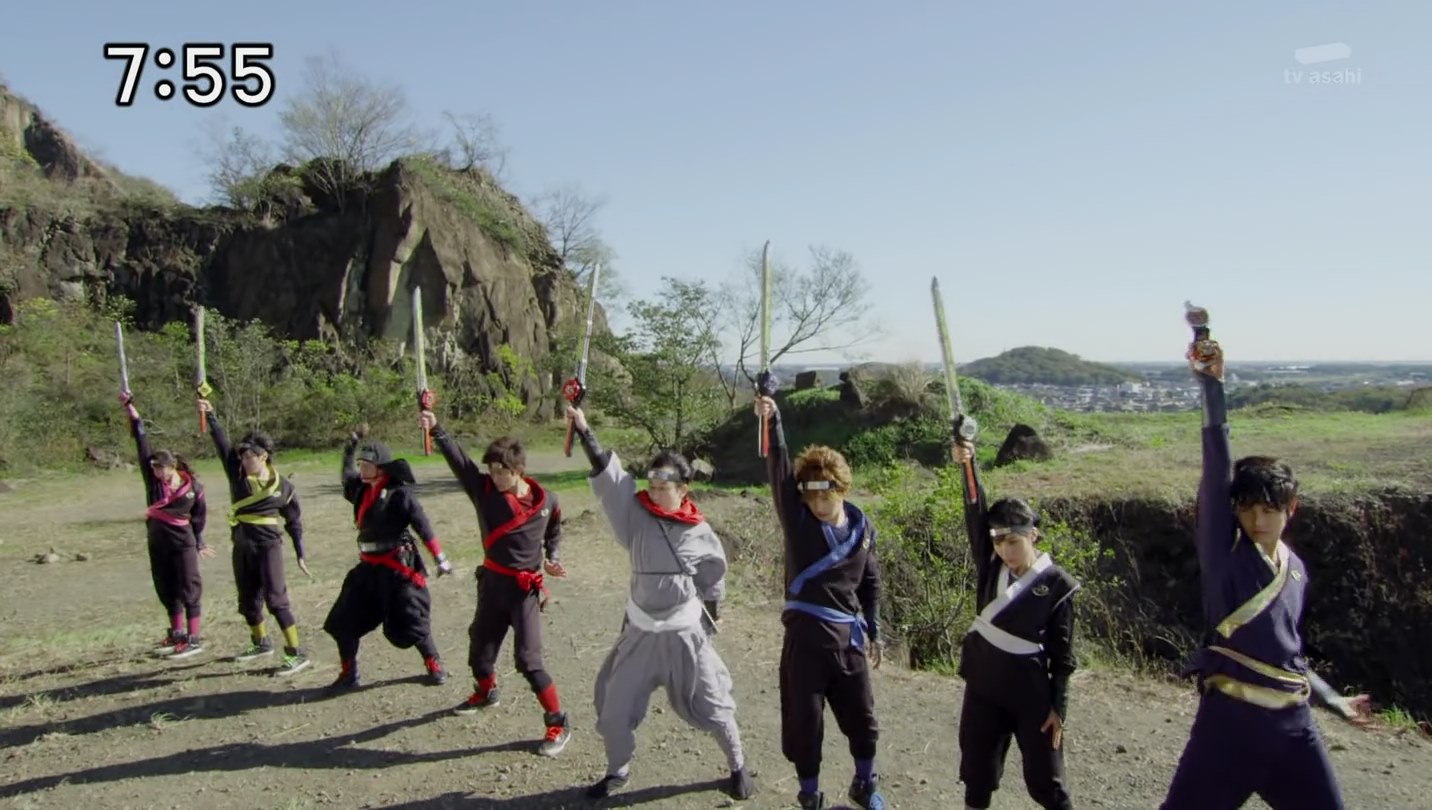 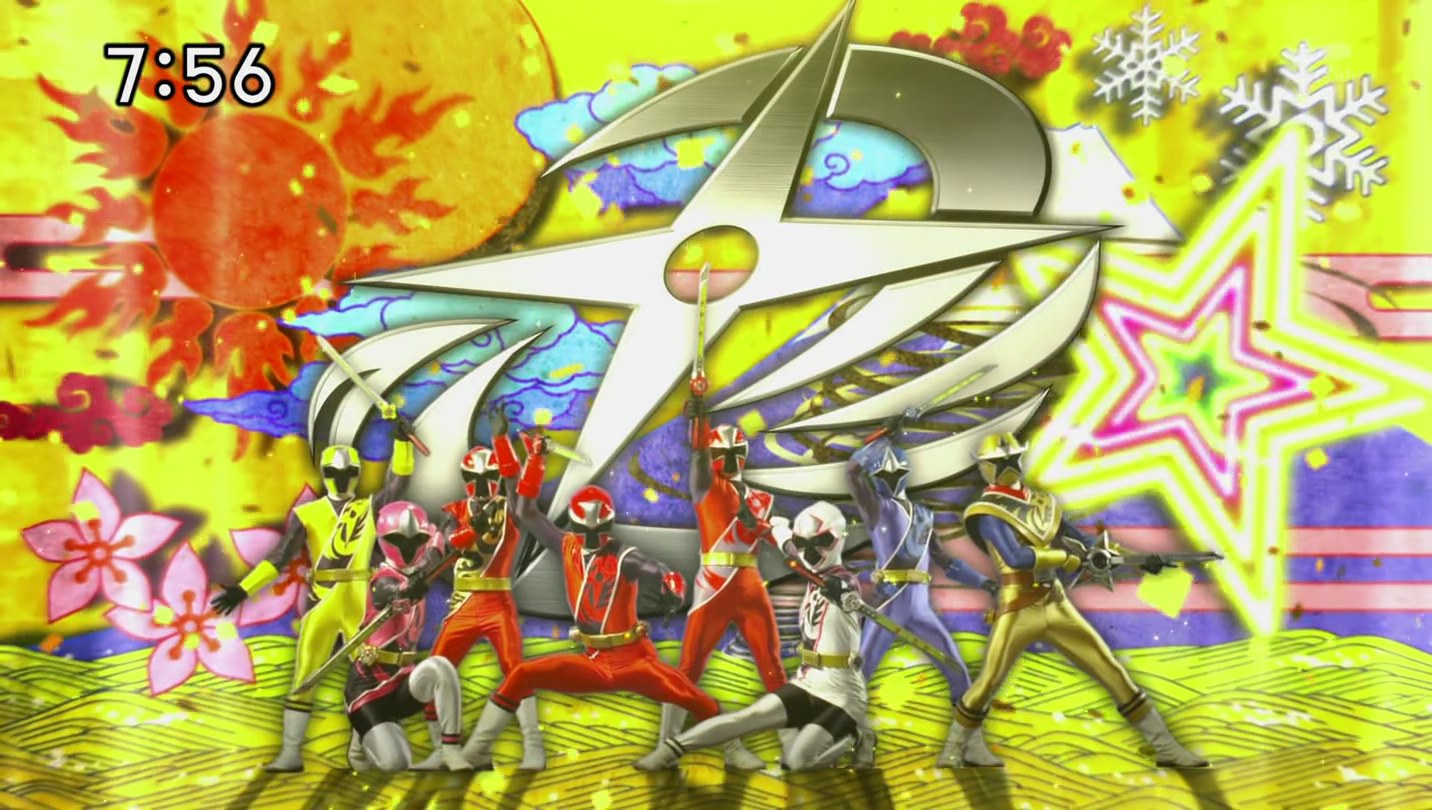 An they’re all ready to rampage. 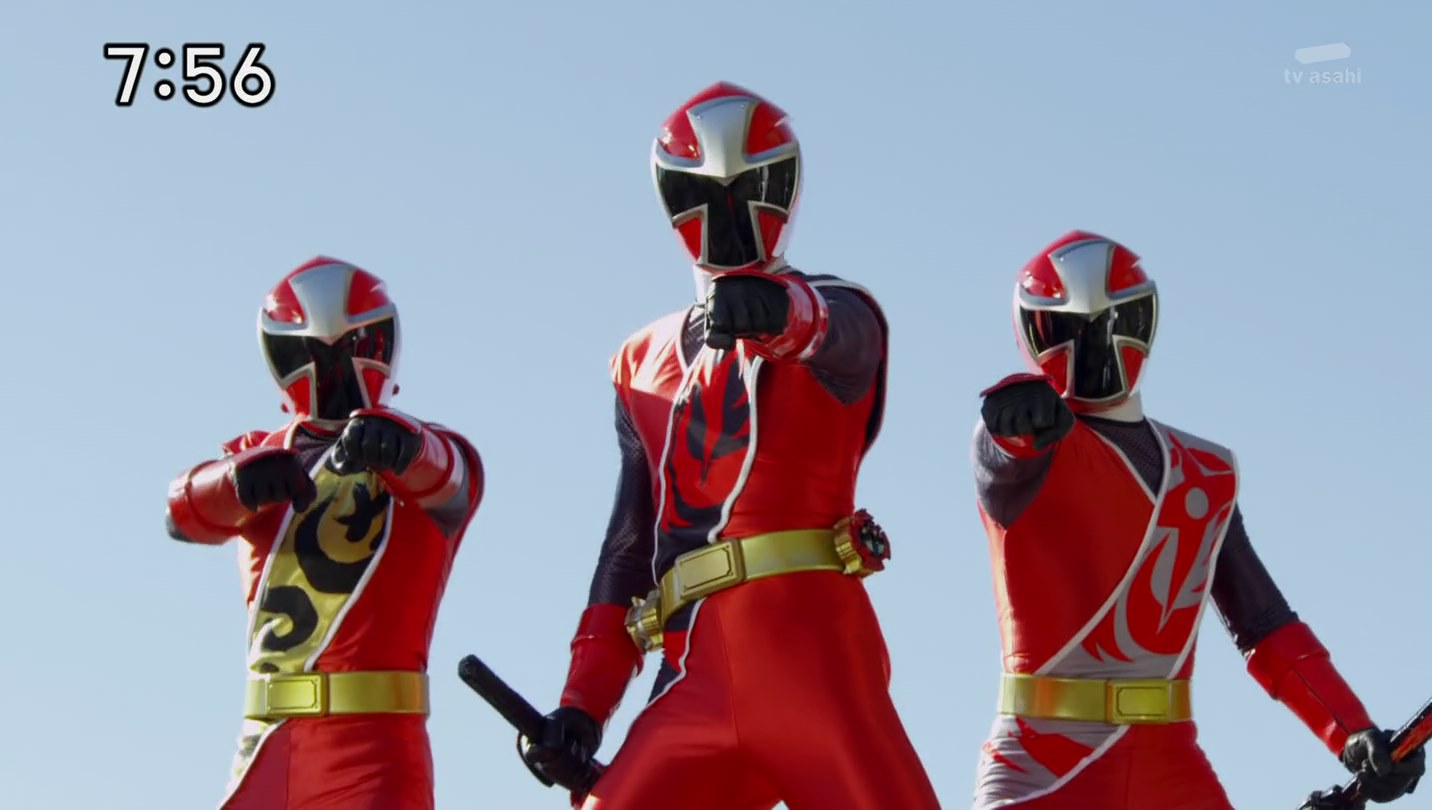 Great place to end this episode! Very nice. I definitely enjoyed this one. Things definitely kicked into high gear.

The fight scenes… no, the BATTLE scenes were amazing. Those were huge! Lots of special effects with Grandpa and Kibaoni’s fight. It was INSANE! It was like some Koichi Sakamoto-level extravaganza. I loved it. The Ninningers battle with Kyuuemon was amazing as well. The entire sequence of them in the warehouse was done excellently.

I really liked the direction in this episode. Some very nice cinematography, some subtle and artsy angles and shots. It was great. Added a great sense of drama and tension which culminated in the great scenes of the whole family together.

I’ll repeat it every episode until the end. The strongest aspect of this season has been everything about family. If ToQger was about the bonds of friendship as family (in a world of imagination of course), Ninningers takes that idea and runs with it. The idea of family topping anything else and how family doesn’t only mean by blood. I expect the last two episodes to continue emphasizing that theme and bringing it home.

The Igasaki morph was beautiful.

I wonder what Father found in the tanuki statue. Finishing Shuriken of the End maybe? Where you least expect it of course.

I assume the last episode will be the ultimate battle with Kyuuemon. Gengetsu will probably be killed in the penultimate episode, yeah? Kyuuemon just has to be the final battle. And I hope we get to see more flashbacks of him before the end. That flashback of him and Grandpa and the mallet was great.

Overall, definitely a great and exciting episode. I’m very excited for the final two. Definitely different from ToQger‘s final episodes which had me drowning in my own tears. (Which I absolutely love and do not regret.) Ninninger instead has me pumped, especially after this episode of pretty explosions and action.

Recap: Avataro Sentai Donbrothers, Episode 37 – I and Ni and Za and Shi