Teams are making their way to Malasag Eco-Tourism Village and Gardens in Cagayan de Oro City. Matt & Phoebe are excited to be in first, but Kelvin & JP are right behind them.

Phoebe decides to go first. She is worried about these Tagalog questions for Matt.

Kelvin & JP arrive and Kelvin goes first. He explains AJ & Jody are most likely to lie to them since they voted for them since the start of the Race. Kelvin & JP have the best teamwork. And Zarah & Osang as the first team eliminated.

Kelvin answers Jet & Yna for Question 4 even though he’s not really jealous. And Matt & Phoebe helped them the least because they never gave them the answer at the Stock Exchange in Leg 1. 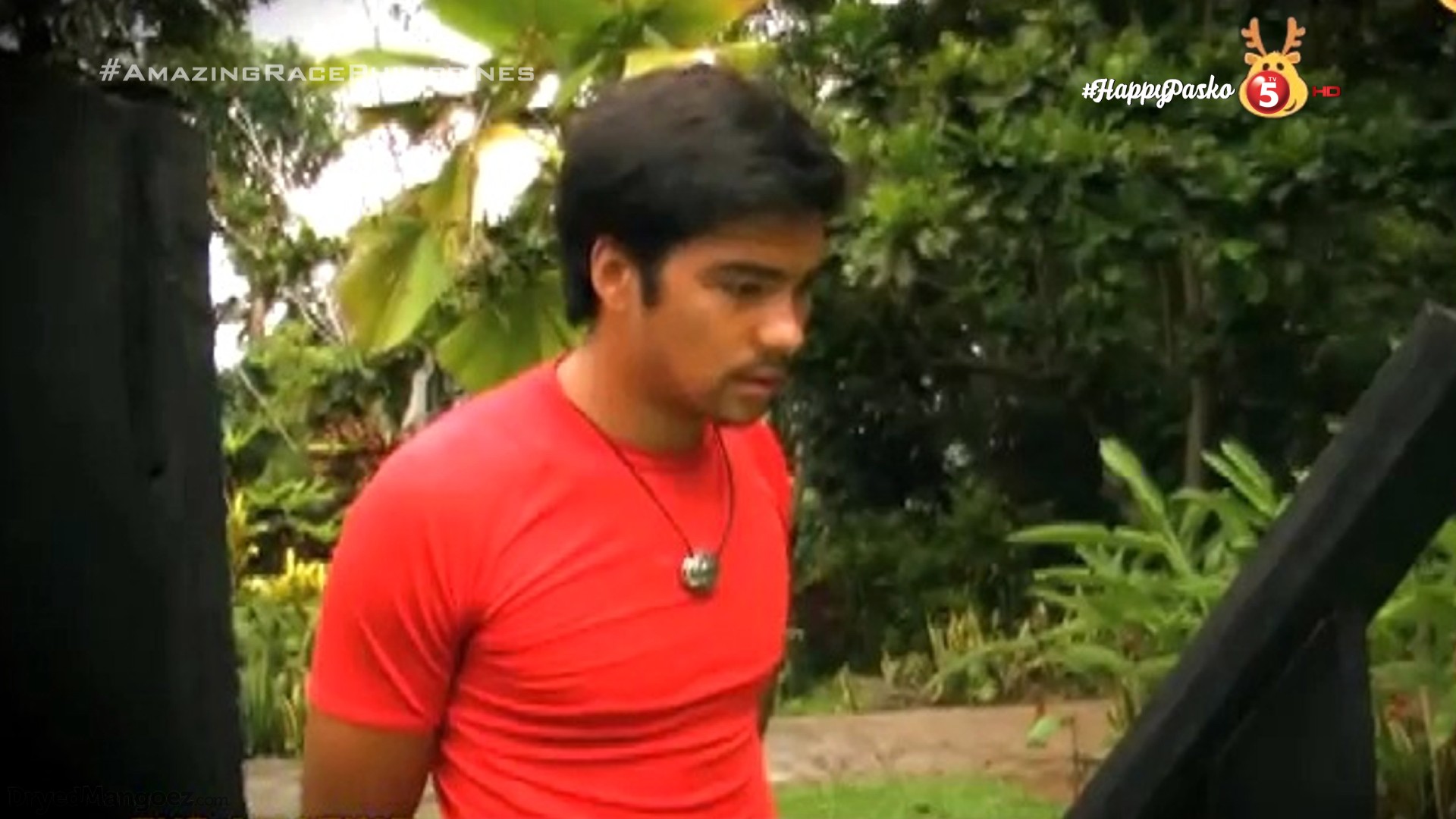 It’s Matt’s turn to answer. He answers Zarah & Osang for Question 1 because he and Phoebe didn’t help them in the first Leg. AJ & Jody for #2 because they lied at the Vote Board. Jet & Yna for #4 because they always fight with each other and also for #3 because they have a family construction business. And for #5, he thinks they, Matt & Phoebe are “pinakalayas.”

But none of them are correct.

Matt is unsure and doesn’t even know what some words mean. 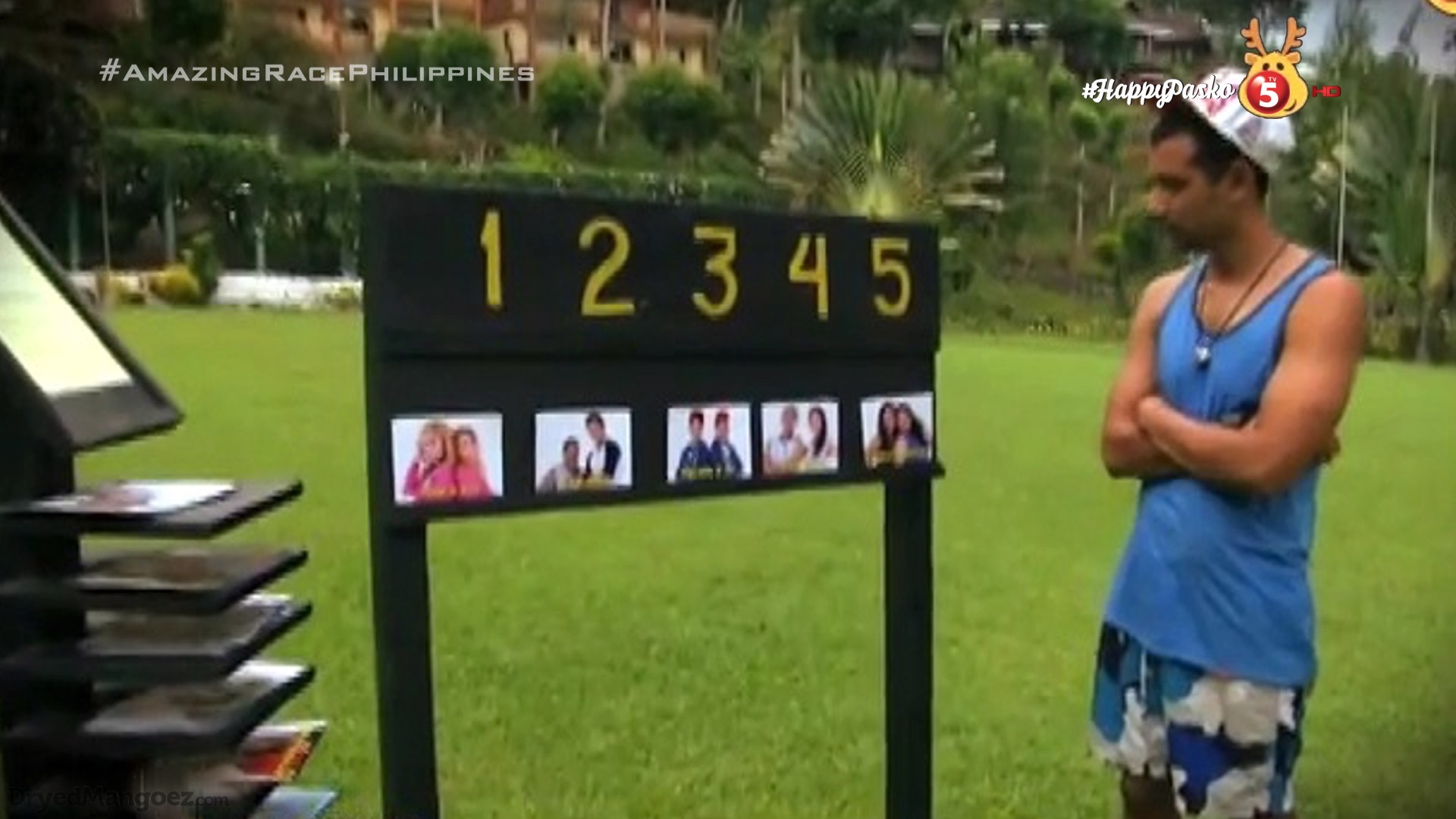 JP goes to the board. Roch & Eji helped them. AJ & Jody lie. Kelvin & JP have the best teamwork. Zarah & Osang are the unluckiest. And RR & Jeck have the best relationship with God and husbands.

Matt and JP switch pictures around. Still nothing. JP is frustrated because he and Kelvin already talked about this kind of challenge before and Kelvin didn’t do his part, he thinks.

Tina & Avy helped them the least because they didn’t even see them the entire Race. Matt & Phoebe lied to them twice. Jet & Yna have the best teamwork. They are jealous of Vince & Ed’s relationship. And finally, Matt & Phoebe are the team that’s “pinakamalakas” (strong) not “malas.”

Yna goes. She gets Questions 2 and 3 correct as Roch & Eji arrive.

Roch goes first. She answers how she thinks Eji would answer.

On the other side of the grassy field, meanwhile, JP finally matches all five answers and he gets the next clue.

Teams can now head to the Pit Stop at Mapawa Nature Park.

Matt & Phoebe are close behind.

As Eji gets started, Yna is struggling to think about which question Kuya Jet’s misunderstood because they always have a question and answer session every night.

Back at the task, Jet realizes he’s made some kind of mistake and Yna realizes what that is.

But it’s too late as Eji gets the correct answers. He and Roch happily reunite and they run off.

Yna finally switches in Matt & Phoebe for the last question and she receives the next clue. She tells her Kuya Jesy his very malas mistake and he apologizes for misreading the question.

Roch & Eji dance their way to the Mat where Derek officially checks them in as Team #3.

Jet & Yna arrive. Before Derek gives them the bad news, they have a chat. They talk about their goals: First, to join The Amazing Race and then not to be the first eliminated. Yna is happy to have been able to grow during the Race, gaining more confidence in herself. And they are happy that their relationship has remained strong and they hope they’ve been able to show what a strong family can accomplish.

Okay, what is Active TV’s obsession with that “How well do you know your partner’s opinions of the other teams?” task? Like, seriously. lol TARA, TARAu and now both TARPHs? Pig or Jig is a task you can repeat over and over because it’s awesome. But this task is just random and unnecessary, especially in the penultimate or final Legs.

It’s also the task that gave us one of the worst winners in Amazing Race history (Eric & Danielle, TAR11) and robbed two of the best teams ever (Charla & Mirna and Dustin & Kandice) from historic wins. Hmph.

So I am definitely not a fan of this task, especially not as the final task of the penultimate Leg to decide who goes into the Final Leg. And then Jet & Yna committing the same mistake Sheena & Gee made? =(

The strangest thing about this task though was the teams voting AJ & Jody as the team most likely to lie to them.

Did we miss something? AJ & Jody have been pretty quiet the entire Race when it came to the other teams and pretty much did whatever #TheBrainTrust wanted them to for the alliance. So… that was very strange.