Kiriko finds Shinnosuke lazily hanging out in the cafeteria again. Shinnosuke says to get back into high gear, he’s got to rest a bit. Belt-san, speaking through the Shift Car, doesn’t disagree.

Chief Jun comes over the PA and calls all the members of the Special Investigations Division to the office. They get up to leave, but Kiriko sees a Shift Car arrive. “Vegas… it can’t be!”

Shinnosuke and Kiriko meet Otta at the museum where a pair of female students have gone missing after a Gravity Shift. They head back to the office to report their findings, but Otta insists no monsters are involved.

Kyu thinks otherwise. He shows them info about a haunted atelier incident from last week where a monster seemed to be eating the ghosts of beautiful women. It seems to match the M.O. of this new case.

Kyu and Otta argue. Chief Jun decides to rearrange the team based on their compatibility readings for today. Otta will be paired up with Rinna (who isn’t here today) while Kyu joins Shinnosuke and Kiriko.

On the way to the atelier, Shinnosuke asks Belt-san about Kiriko seeming different after that new Shift Car appeared. Belt-san says there are Shift Cars conducting their own investigations. Dream Vegas is searching for a perp closely connected to Kiriko. 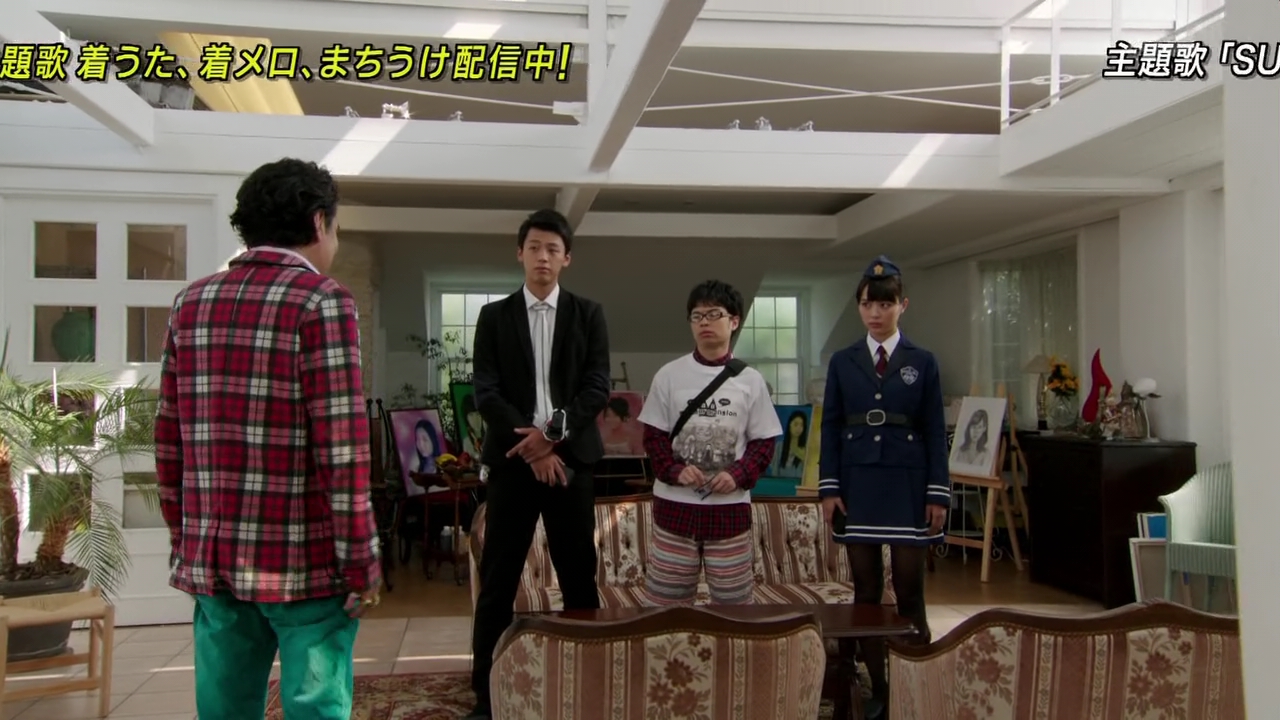 They arrive at the atelier and talk to Asaya Kazuhiro, an artist and owner of this specific workshop. He’s apparently a famous avant garde painter of beautiful women. (Creepy!)

They show him their IDs, but when Asaya gets to Kiriko, he feels up her arm and takes her hand. (Creepy! x2) She jerks her hand away from the creepy man and he apologizes. She’s so pretty that he wants to paint her.

He says he won’t do anything bad to her, he’s only interested in what’s above the neck, as seen by all his paintings. He thinks he might even remember something about the night of the incident if he paints her.

Asaya’s student, Fujimiya Hajime, walks in and says it’s rude for him to ask a lady to sit for him on their first meeting. Asaya takes Fujimiya’s sketchbook from the easel and tosses it back at him saying that’s why all his drawings are so dull.

Fijimiya leaves as does Shinnosuke-tachi. They agree this Asaya guy is suspicious. 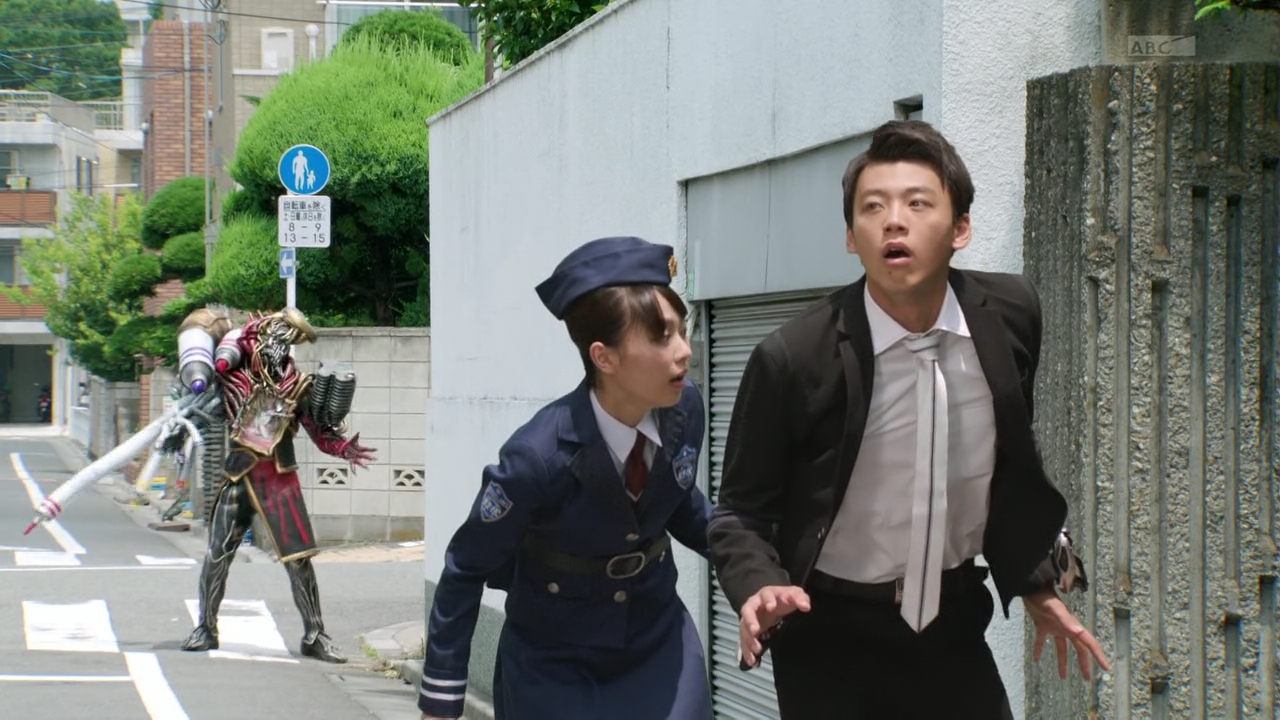 While still outside the atelier, they sudddenly feel the Heaviness! A Roidmude appears and suddenly, Kiriko’s hand starts to turn into threads of color.

She flashes back to a rainy night just as Dream Vegas and other Shift Cars arrive to help both Shinnosuke and Kiriko break free of the Heaviness. Belt-san arrives in Tridoron and Shinnosuke runs over to grab him and henshin.

Kiriko knows this is the same Roidmude from before.

Shinnosuke fights it. Belt-san says this Roidmude is evolved, it can turn humans and objects into threads of color and light.

This painter Roidmude sends a thread of light toward Shinnosuke and it pierces the tire. Belt-san tells him to change. 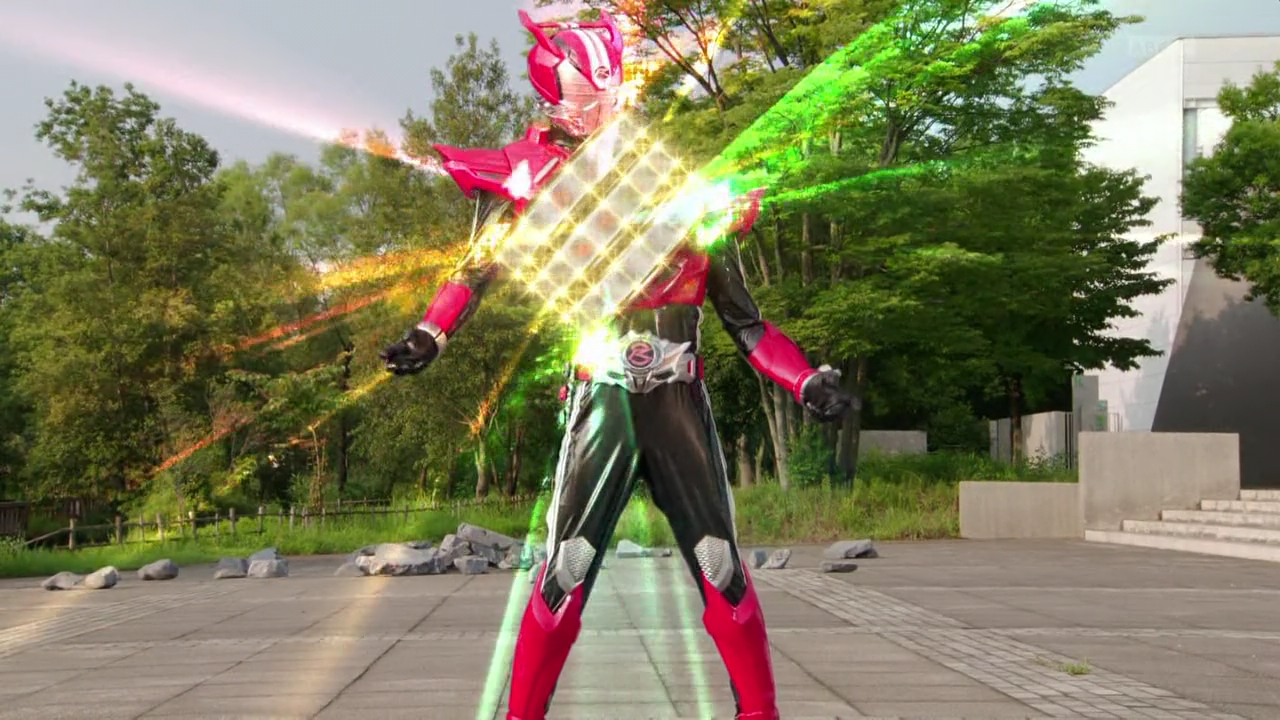 Dream Vegas arrives and Shinnosuke uses the new Shift Car and its two slot machine reels as weapons. Shinnosuke initiates the Vegas finisher which attaches the two reels to the third one around his chest. The three reels spin, but according to Belt-san, he lost this bet. No finisher.

The Roidmude attacks and escapes. 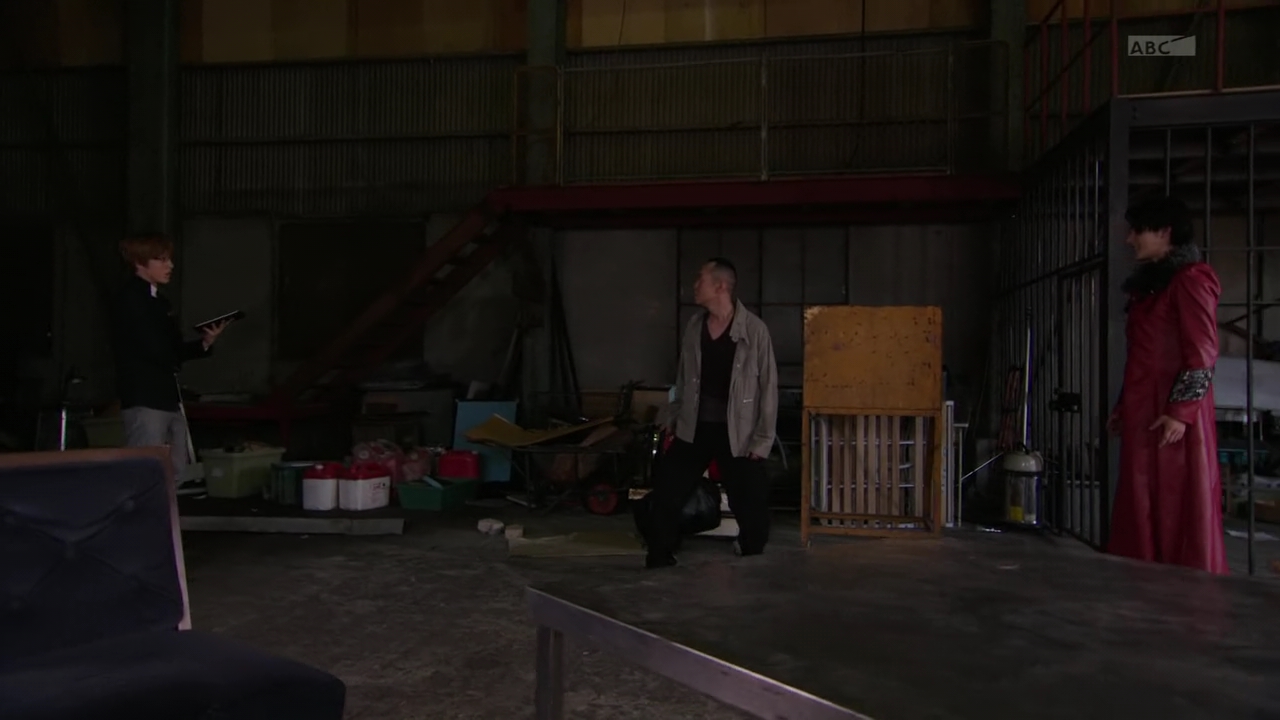 Across town, Heart and Brain are cornering another Roidmude who has just robbed a bank. Brain says it was too loud, expensive and haphazard. The Roidmude turns to see Chase, who he calls the “Grim Reaper!” shoot at him.

The Roidmude, 051, morphs into his Roidmude form. Chase, meanwhile, henshins into his own non-human form.

Chase finishes 051 off and the number floats into his tablet. They agree that they need to keep an eye on Paint Roidmude. 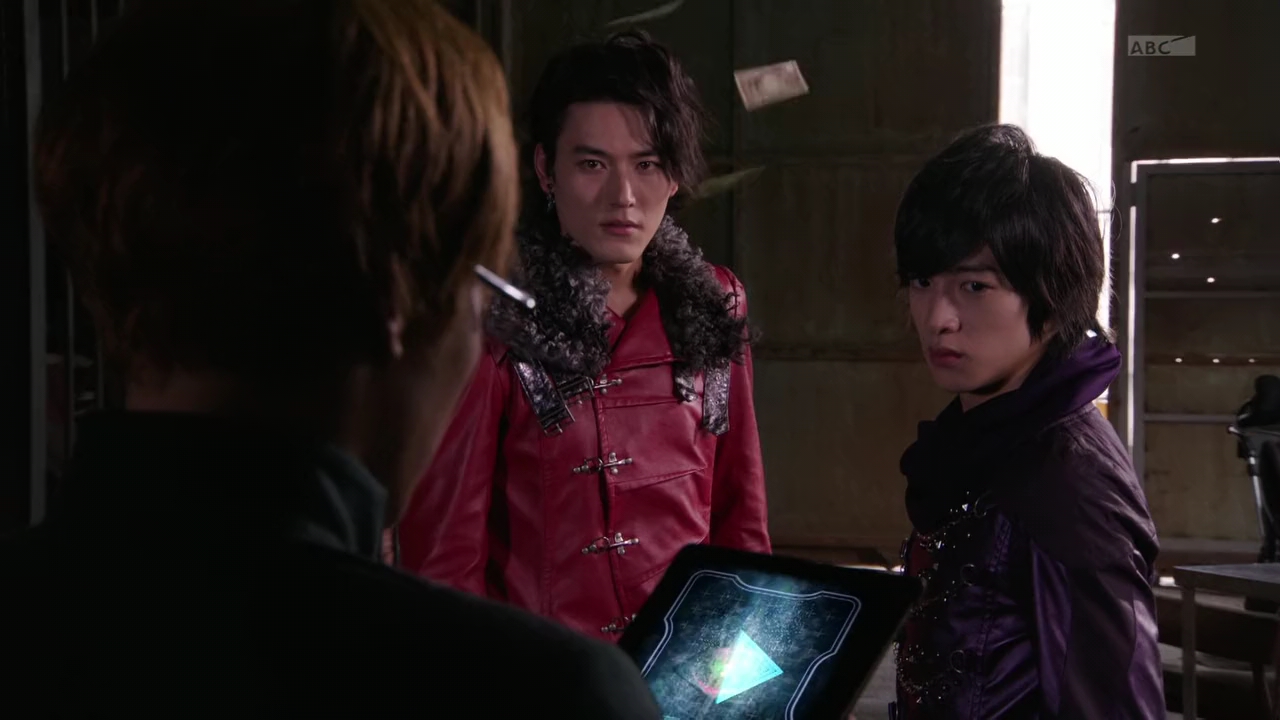 Shinnosuke and Kiriko are taking Gravity Shift readings outside of the atelier when Ayasa and Fijimiya arrive. 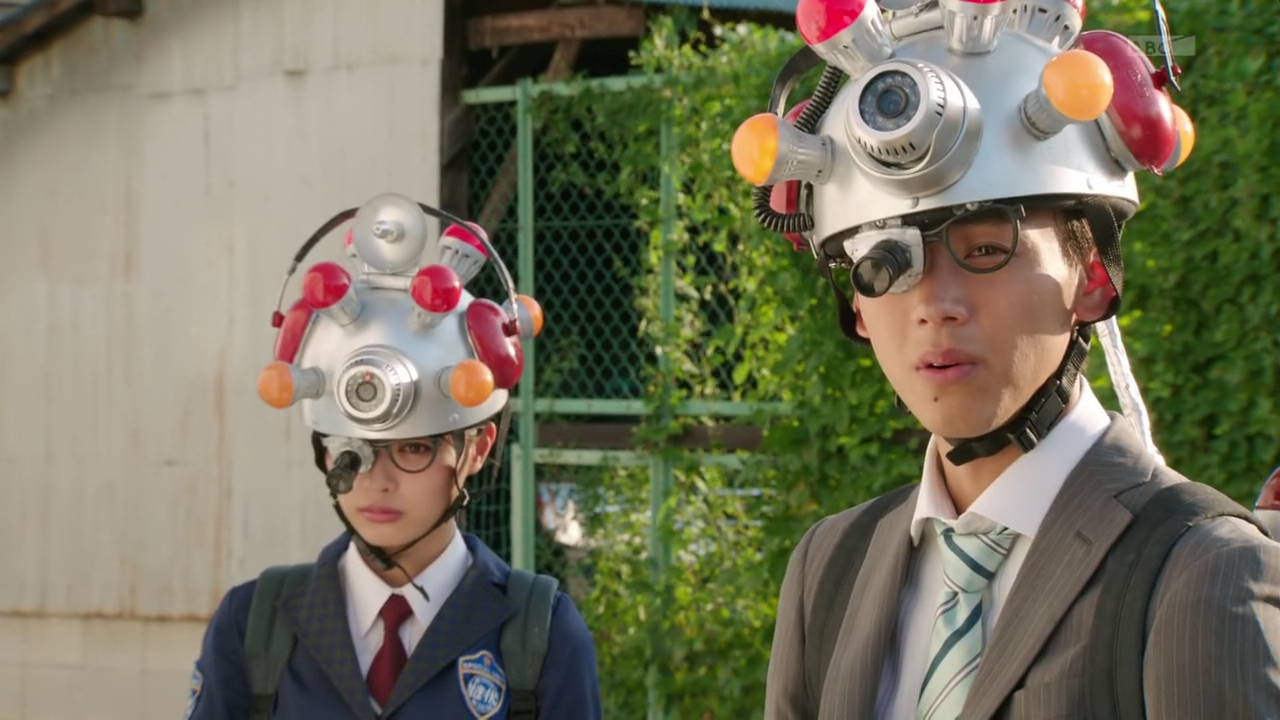 Ayasa touches Kiriko’s shoulder while Fijimiya accidentally bumps into her before they walk in.

Back at the Pit, Belt-san explains that the Roidmude cover themselves in an outer skin similar to a human form and can mimic other data like bodily functions. And since they can’t detect Gravity Shift particles from their bodies, they can’t do anything until they reveal themselves.

But how many more women will be victimized before they can stop him? Isn’t Shinnosuke the one who can save them?

Shinnosuke is surprised by Kiriko’s impassioned plea, but they can’t do anything at the moment with Ayasa blending in the way he is. Kiriko understands that, but the one who can overcome all of that is…

Belt-san explains. On the night of the Global Freeze, Kiriko was attacked by a monster who could turn humans into data. She believes this Roidmude is the evolved form of the monster from that night. 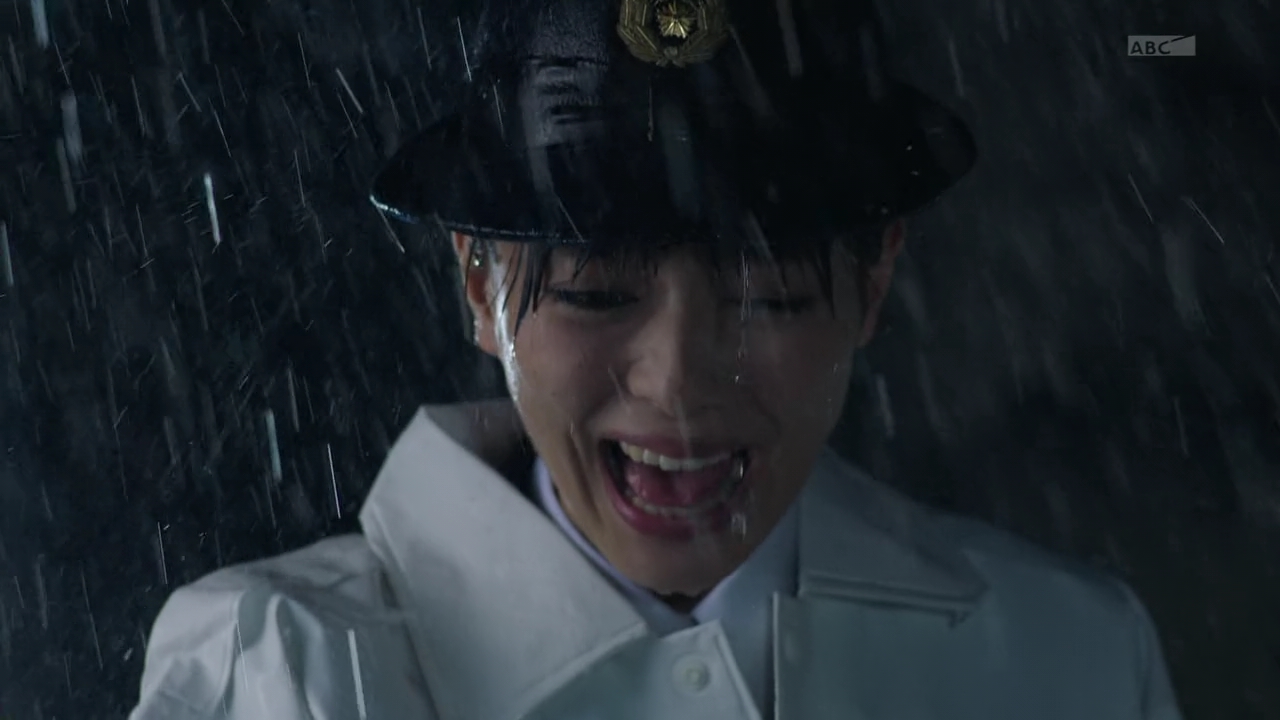 It was thanks to Proto-Drive that she was saved. That’s when the Roidmude named him “Kamen Rider,” their nemesis.

Shinnosuke acknowledges his Drive-senpai and Belt-san says he was defeated by the enemy and lost his life. But unlike Shinnosuke, Proto-Drive did not have the power to destroy the enemy.

Kiriko heads to the storage room and finds a note from Fujimiya that he snuck onto her Gravity Shift detector earlier. He asks to meet her, alone, at the atelier. He leaves the backdoor open and she enters. 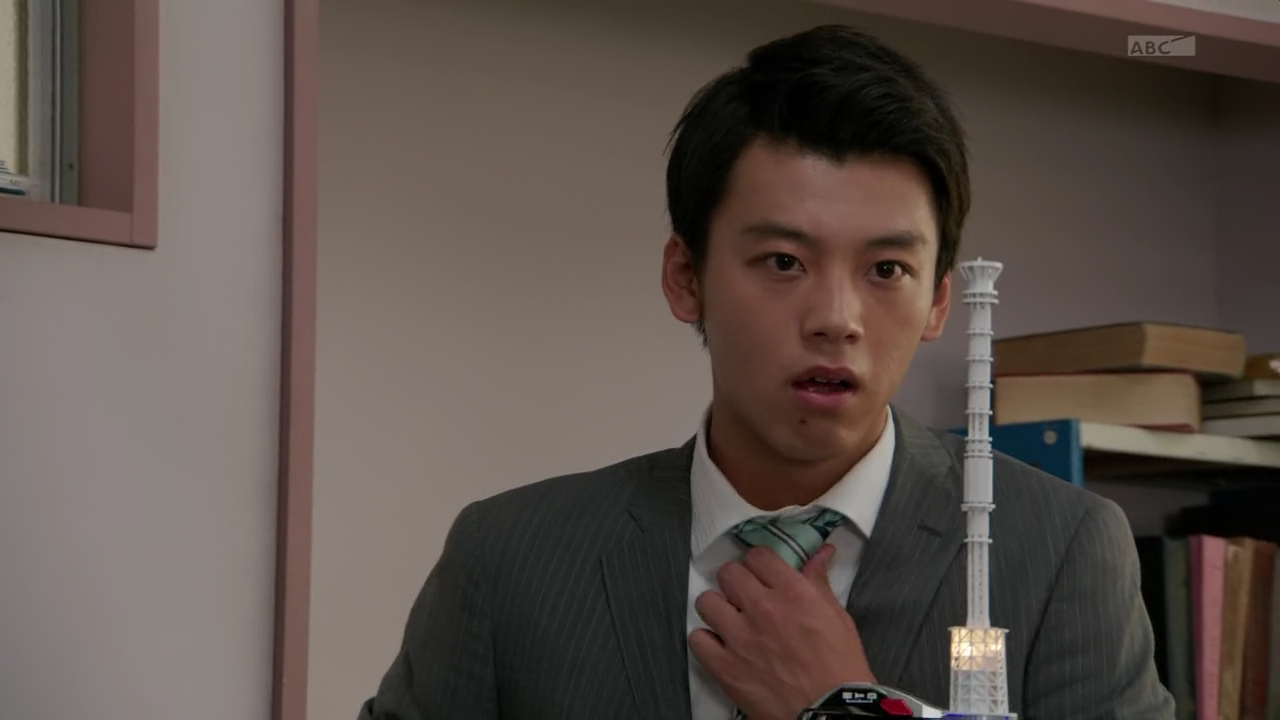 Back at the SID office, Kyu shows Shinnosuke a list he’s compiled of the missing women. Shinnosuke notices something with one of the women’s pictures and that clue has now put him in top gear. He fixes his tie and calls Kiriko to come with, but Chief Jun says she left a while ago.

Shinnosuke realizes where she might be and he hurries.

Kiriko walks over to the paintings and she sees the women are trapped inside them! They call out for help. 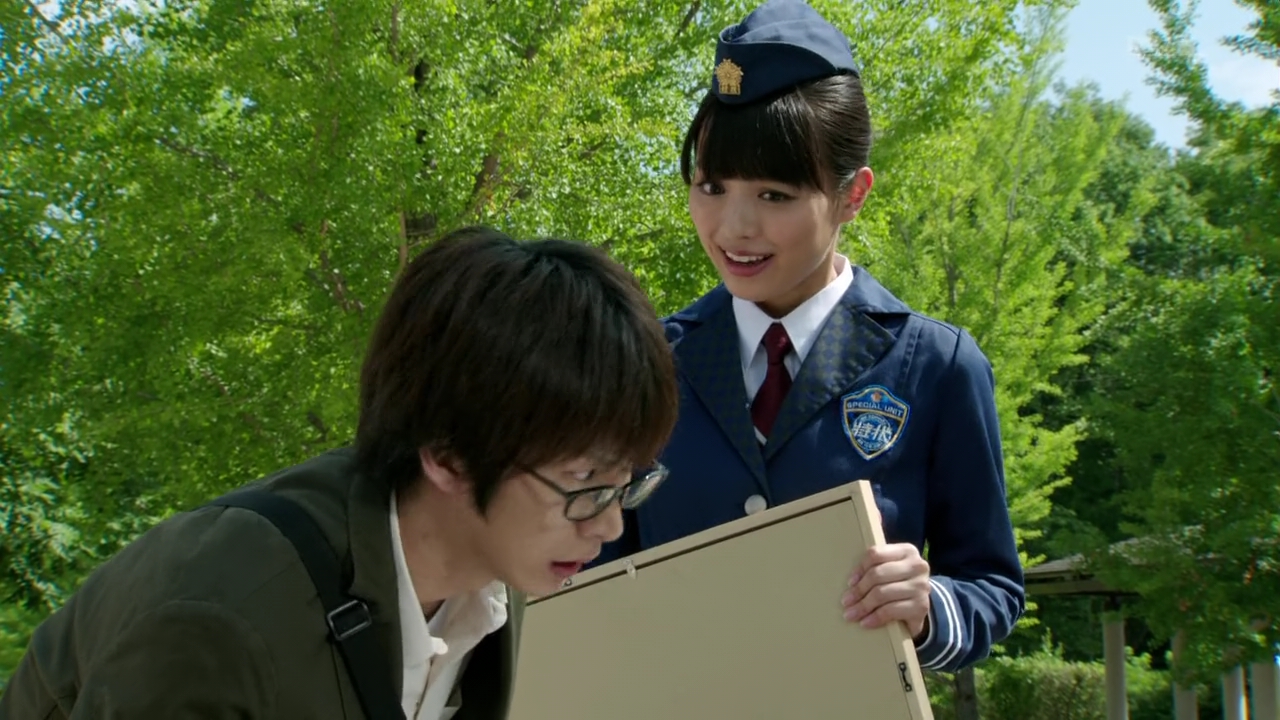 Fujimiya grabs Kiriko just as Ayasa walks up to the atelier. They run away from the atelier. But Fujimiya reveals his true colors. He too is a Roidmude, but he sketches his women instead of painting.

He wants Kiriko to be one of his sketches as he morphs into his Roidmude form and initiates a Gravity Shift.

Shinnosuke arrives just in time and he tosses two Shift Cars to help Kiriko counter the Heaviness. He tells her he realized the faces in the sketchbook resemble the faces of some of the women who disappeared.

Shinnosuke explains the haunted atelier case is about this Roidmude, 084 pulling back the humans escaping from the paintings. 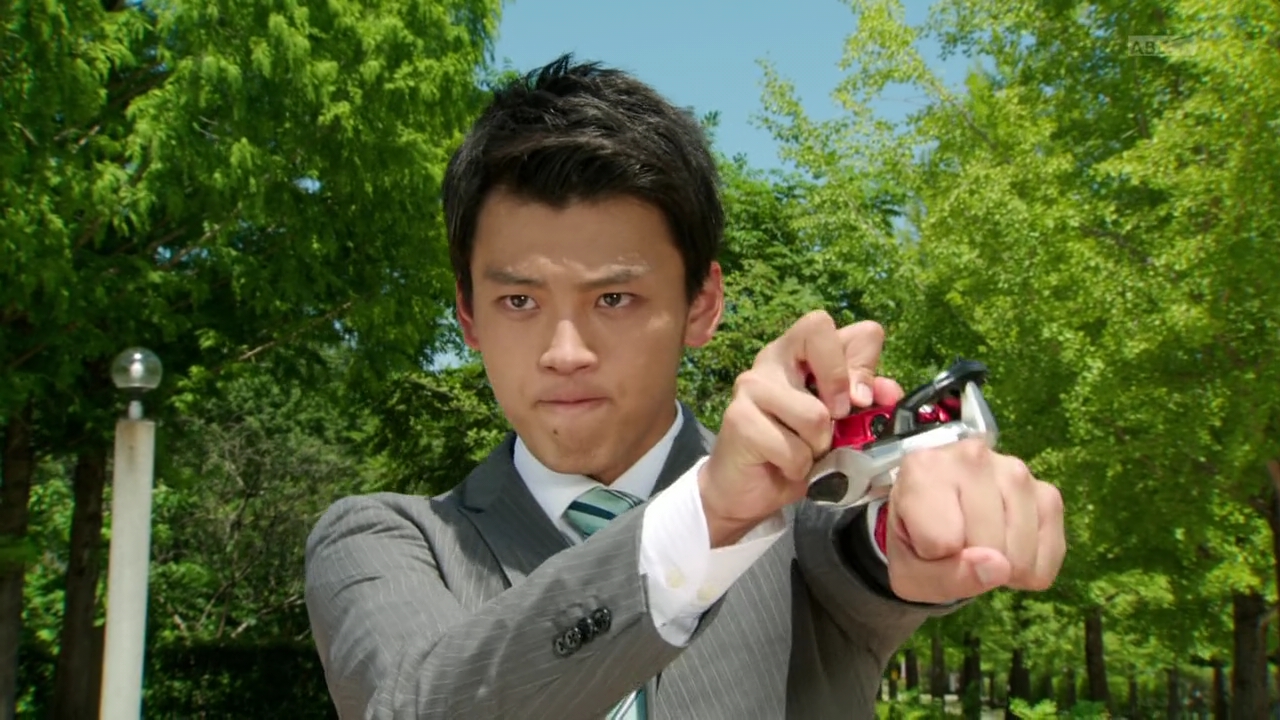 Shinnosuke henshins and they fight.

084 wraps Shinnosuke in spider webs and Belt-san calls two other Shift Cars to come help. Shinnosuke changes into Spin Mixer tire and uses the finisher to trap 084 in cement. He then uses Massive Monster tire finisher to take care of 084 for good.

The woman in the sketch returns to normal, but the paintings are still there. They must be from a different Roidmude. Kiriko remembers that Fujimiya’s number is different from the one who attacked her which was 010, likely Asaya.

Suddenly, Chase appears and shoots at them. Chase henshins and introduces himself as Mashin Chaser, the guard of the Roidmude. Also known as The Grim Reaper.

Paint Roidmude happily watches from the bushes as Mashin Chaser and Shinnosuke start to fight. 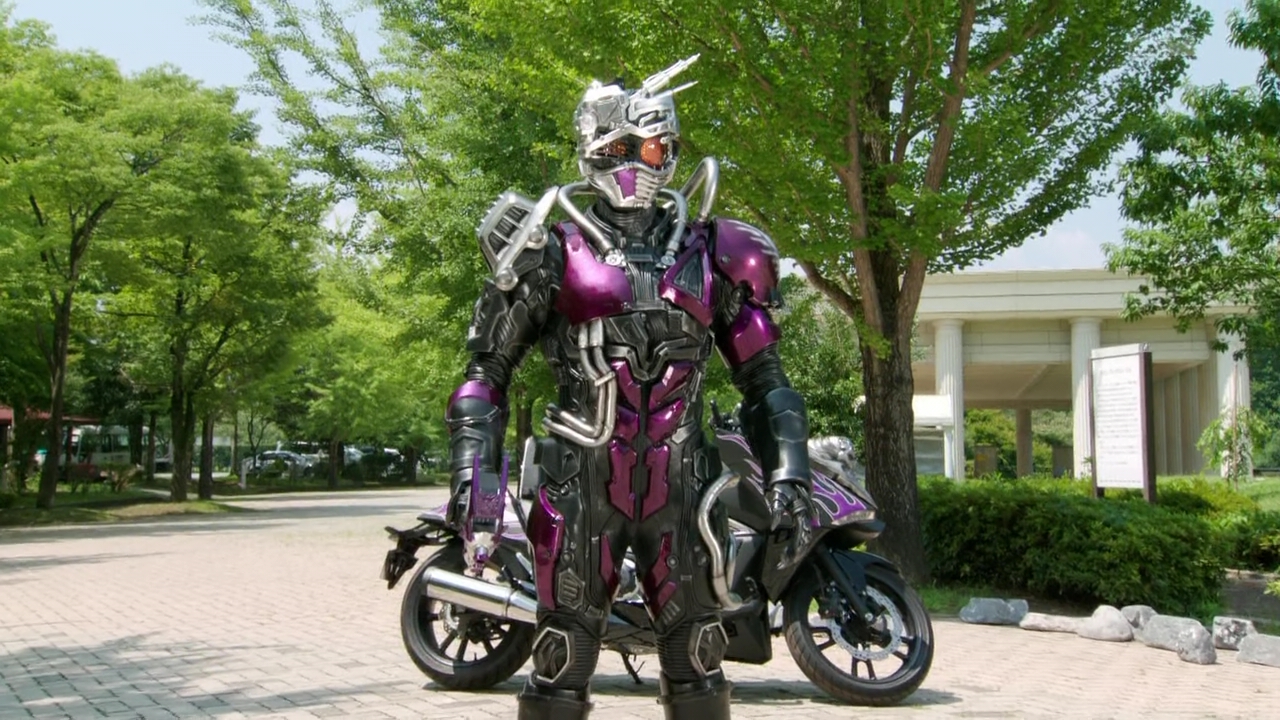 Another good episode. I’m liking the cases so far. They’re simple, but I hope we get more Gotcha! moments in the future.

But ewe at the suspects. So creepy and sleazy. lol

I really liked getting to learn more about Kiriko as well as the Roidmudes. How the Global Freeze affected others is also something I wouldn’t mind seeing more of too.

Mashin Chaser is interesting. Is he not a Roidmude? Is he a Rider?

The seemingly endless assortment of Shift Cars is definitely a toy gimmick, but it’s a fun one. Like we saw here with Dream Vegas, the other Shift Cars don’t all necessarily use tires. So conceivably, anything round can get plopped onto Drive. We’ll see what crazy stuff they can come up with there.

Seeing all these gimmicks suddenly reminded me of the huge missed opportunity Toei and Bandai had with Go-Busters, which is the only season of Sentai or Kamen Rider recently that didn’t have some sort of toy collectable gimmick. Hmph. #StillBitter

Anyway! Drive‘s story is moving along very well so far. Enjoying it very much.

Recap: Kamen Rider Zero-One, Episode 20 – “Warning, warning. This is not a test.”