Recap: Kamen Rider Wizard, Episode 35 – The Other Side of Sora 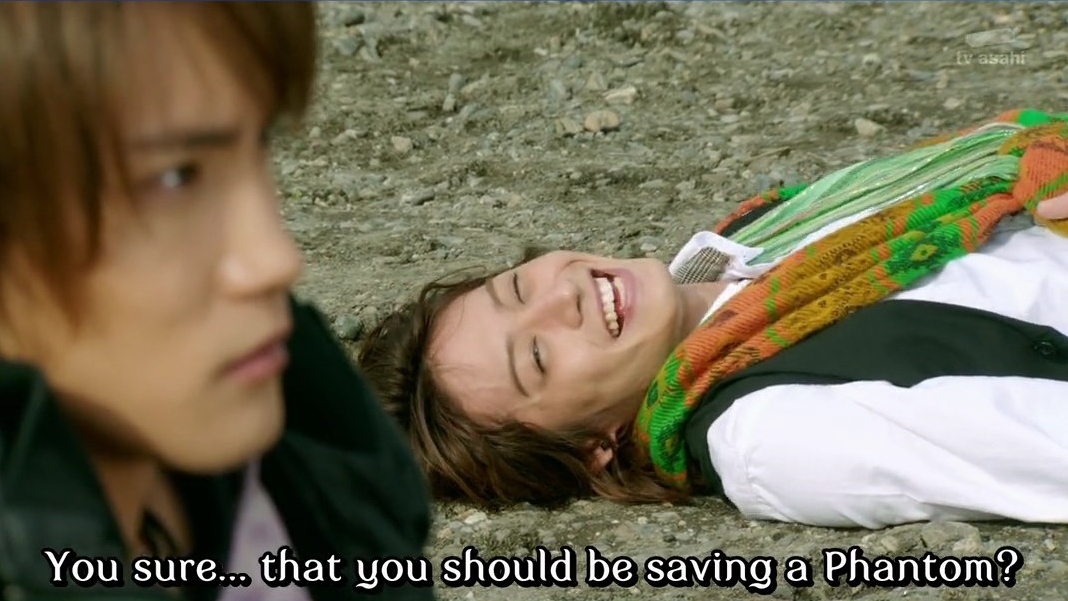 Haruto jumps into the water and brings Sora back to shore. He’s lit a fire when Sora wakes up, looking for his hat.

Are you sure you should be saving a Phantom? Sora asks. Haruto’s not sure, but he felt like he should, so he did.

Haruto helps Sora look for his hat in the water, but asks for info in return. Why are they gathering all these Phantoms? Sora says it’s to prepare another Sabbath.

This angers Haruto, for good reason, but Sora tells him to calm down. Haruto says he’ll never let anyone be like him or Koyomi…

Oh yes, Sora remembers, Koyomi is another one that is neither Phantom nor human, she’s just a “puppet that runs on magical energy.” 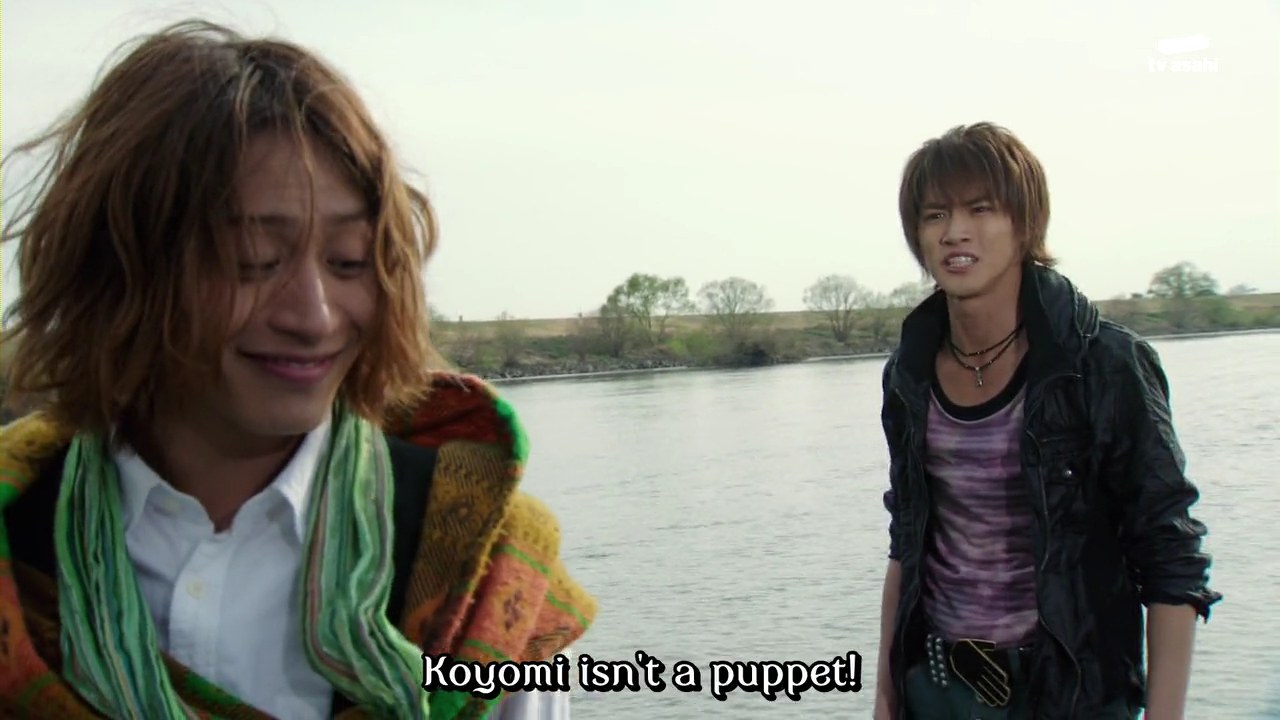 She’s human, Haruto says, she’s the living remnant of a Gate after a Phantom was born from her. That’s peculiar, Sora says, since Phantoms don’t leave behind bodies once they’re born.

Back at the shop, Koyomi worries about Haruto while Chiaki insists on going to her next scheduled job. Kosuke is still annoyed by her apparent hunger for fame, but they all calm down as Chiaki’s manager tells her to go home and rest for now.

Sora says he liked that hat, but oh well. And since he gave Haruto some info, they’re even. Haruto asks if he’ll continue attacking people as a Phantom, but Sora reiterates that he is not a Phantom, he is Sora.

Plainly, “I’ve still got my human heart, like you do. That’s all.”

Sora happily skips away from Haruto as the sun sets, but later is pensive standing on another rooftop.

Next day, Chiaki is at another photo shoot when Argos pops up again. Kosuke and Shunpei run into the studio as Kosuke henshins to spar once again with the Phantom.

He takes Chiaki and they run, but Argos follows an they continue the fight outside.

Chiaki watches from behind a pillar when Sora pops up and grabs her hand. He says this is their chance and he whisks her away. She thanks him for saving her life a second time. He comments how her hair is now a mess and offers to fix it for her since he’s a stylist. 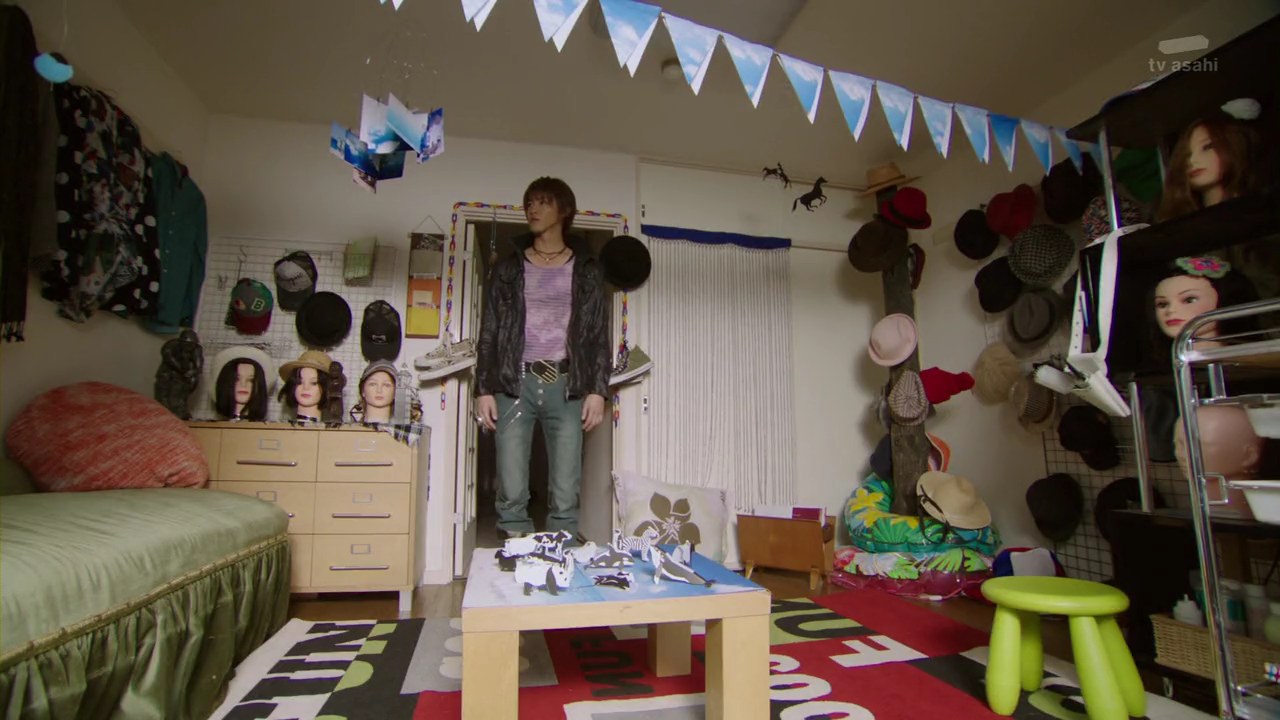 Haruto heads to Sora’s old apartment which seems pretty normal. Rinko calls him and tells him to hurry over to the National Security Bureau.

Chiaki’s manager tells Kosuke and Shunpei that she’s got an important reason for doing all this work just as Griffon reports on her whereabouts.

Sora removes Chiaki’s blindfold and welcomes her to his salon. Looks pretty normal, and pink. Sora comments on how beautiful her hair is and Chiaki divulges that it is a memento of her late mother. If she wears this dress, she hopes her father will recognize her once she’s famous. When her mother died, he became depressed and left her.

Sora says he has a similar memory. 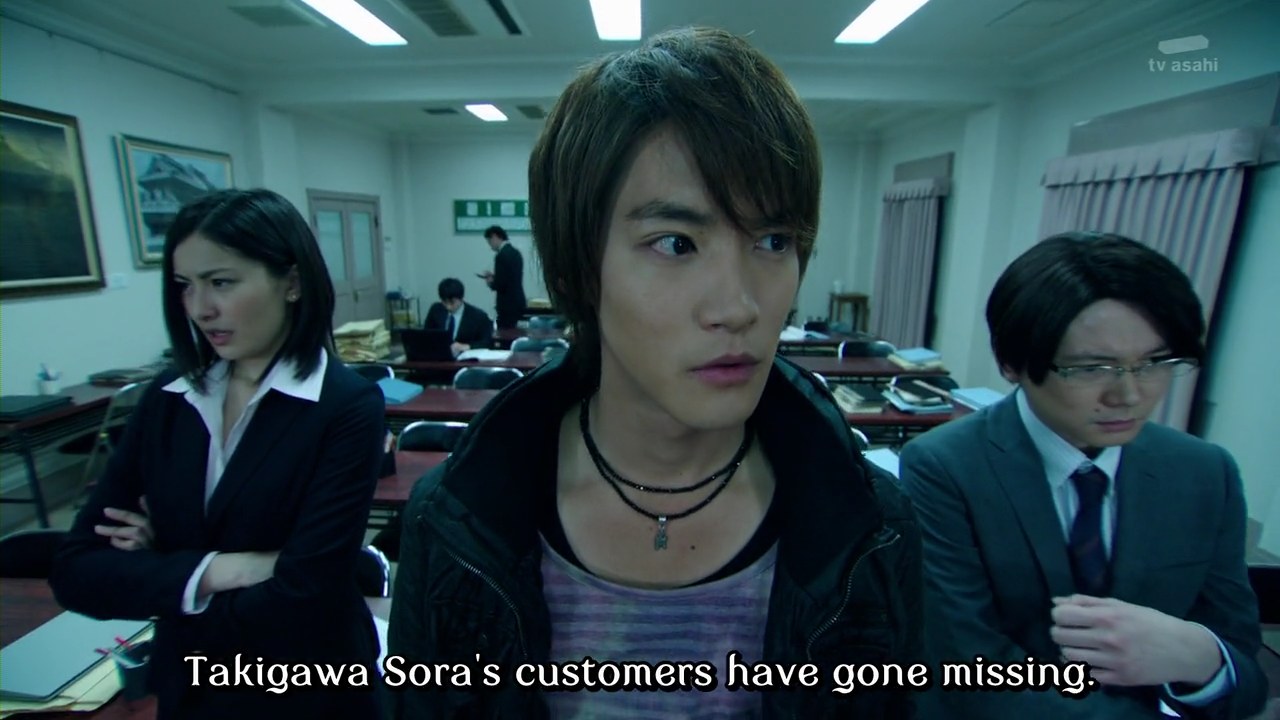 At Department 0, Rinko and Kizaki tell Haruto all about Sora. All of his customers have gone missing and all of them had long black hair. All of them wore white dresses the day they went missing. The kicker though? All of this happened before the eclipse, before Sora became a Phantom.

Haruto puts the pieces together as Sora tells Chiaki his story. He too was abandoned by someone dear to him. 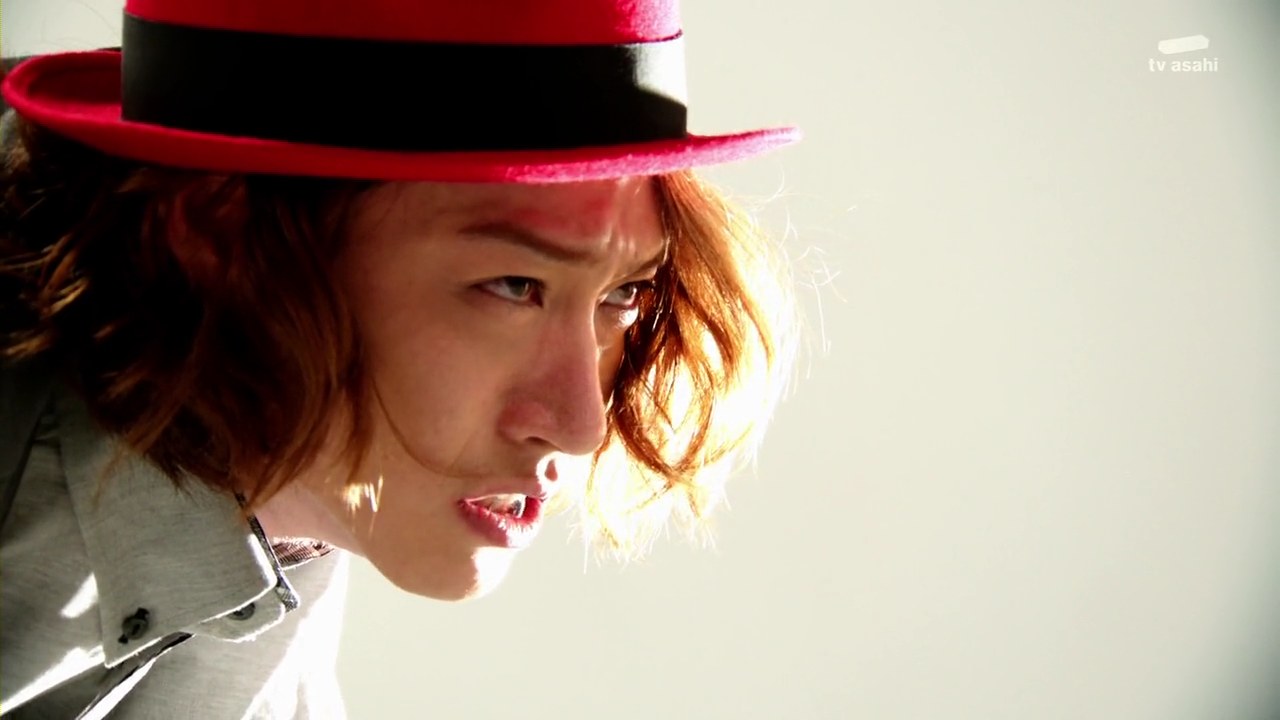 Flashback to a white dressed, long haired woman turning her back to him. He collapses to the floor, distraught. But his expression quickly changes as he removes his red hat and pulls out a pair of scissors. Next thing you know, the woman’s long hair falls to the floor, as does her body.

Back to the present, Sora happily cuts Chiaki’s hair, telling her that he will be the one doing the abandoning. And if she becomes a Phantom from despair, then yay! Bonus!

Sora turns full on serial killer as Haruto, Kosuke and Argos all arrive at Sora’s salon, which is actually a little cubicle in an abandoned warehouse.

Haruto and Sora are left in the salon alone. Sora admits this was all so he could attack Chiaki himself. He laughs when Haruto asks about attacking other women in the past.

I’m not human now, Sora laughs, just like Haruto. I am nothing like you! Haruto fires back. 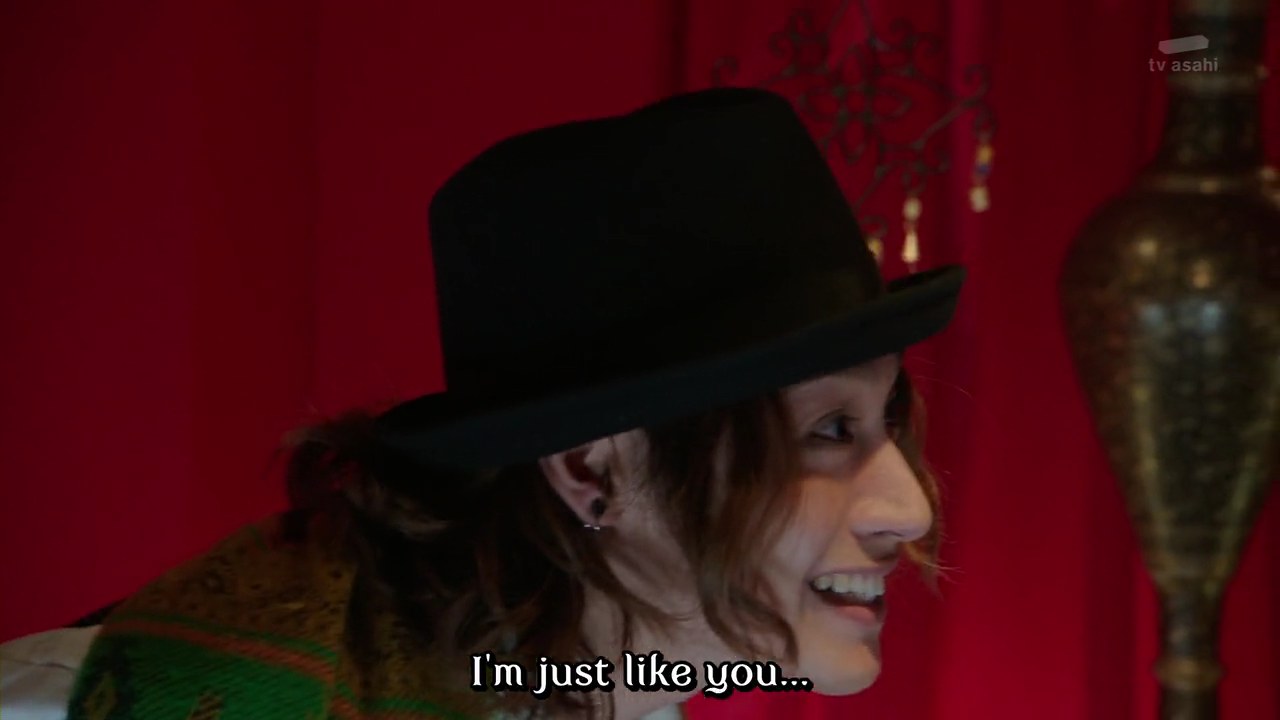 Sora says he thought they’d be able to get along. Haruto says he’s sorry he’s not interested. He henshins, as does Sora and they proceed to fight it out.

Back inside, Haruto goes Infinity, but Sora continues putting up a fight. Haruto attempts to do a High Touch Shining Strike, but Sora retreats and says they’ll fight next time after he’s obtained the Philosopher’s Stone. 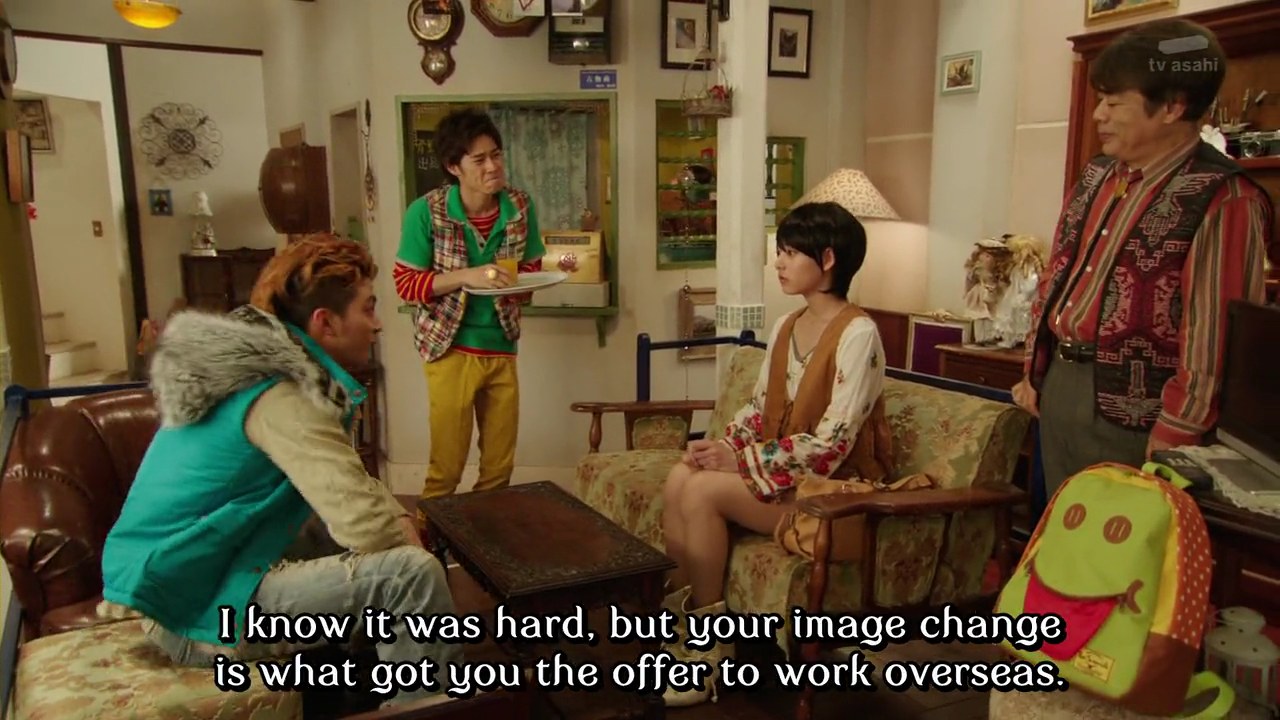 At the shop, Chiaki shows off her new short haircut as well as her softer, nicer personality when her manager runs in with a letter from her father. It is a nice letter telling her he will always cheer for her from afar.

Haruto and Rinko are by the water. He says it was his indecision with Sora that put a Gate in danger. But Rinko says he should think brood over the past and instead accept the present and move forward.

She’s right, he says and he vows to stop another Sabbath from happening ever again. Koyomi comes running towards them saying they’re all going to eat together.

While Rinko and Koyomi chat, Haruto think about what Sora told him about Phantoms never leaving a body behind and how peculiar Koyomi is.

So are you telling me Sora was some kind of sexual predator and serial killer.

I was floored. This children’s program has a jolly character turning out to be some kind of unstable murderer who preys on women after his girlfriend (or something) leaves him. Wow.

Absolute insanity. At first, I was like, dude, this has nothing to do with Phantoms and magical stones. This guy was a certified psychopath who killed three whiteboards-worth of women.

Then, I guess I saw what he meant when he said he still had his human heart with him even after becoming a Phantom since his heart was already evil before the Sabbath.

But come on now, this is some dark shit. Yes? 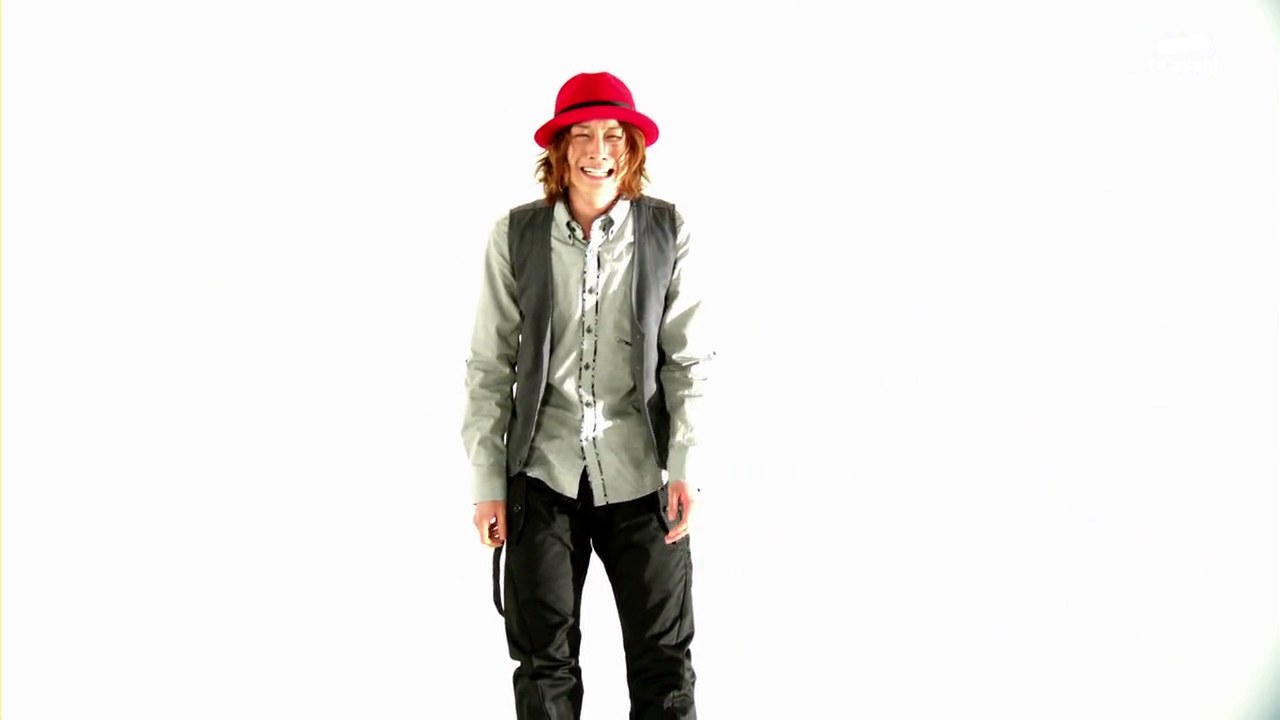 So what does this make Koyomi? While I am definitely interested in seeing how her story plays out, I don’t like how they’ve developed her character or more, presented her character. She is supposed to be some shell of a person with no emotion and that’s the way she was in the beginning. But now she’s very expressive, showing emotion all over the place. I don’t get it.

Anyway, I guess this was a good episode though I still feel all creeped out at having liked this green jolly rancher so much when in fact, he’s actually a sociopath.

Looking Back at (and Ranking!) the 12 Seasons of “Kamen Rider” I’ve Watched So Far