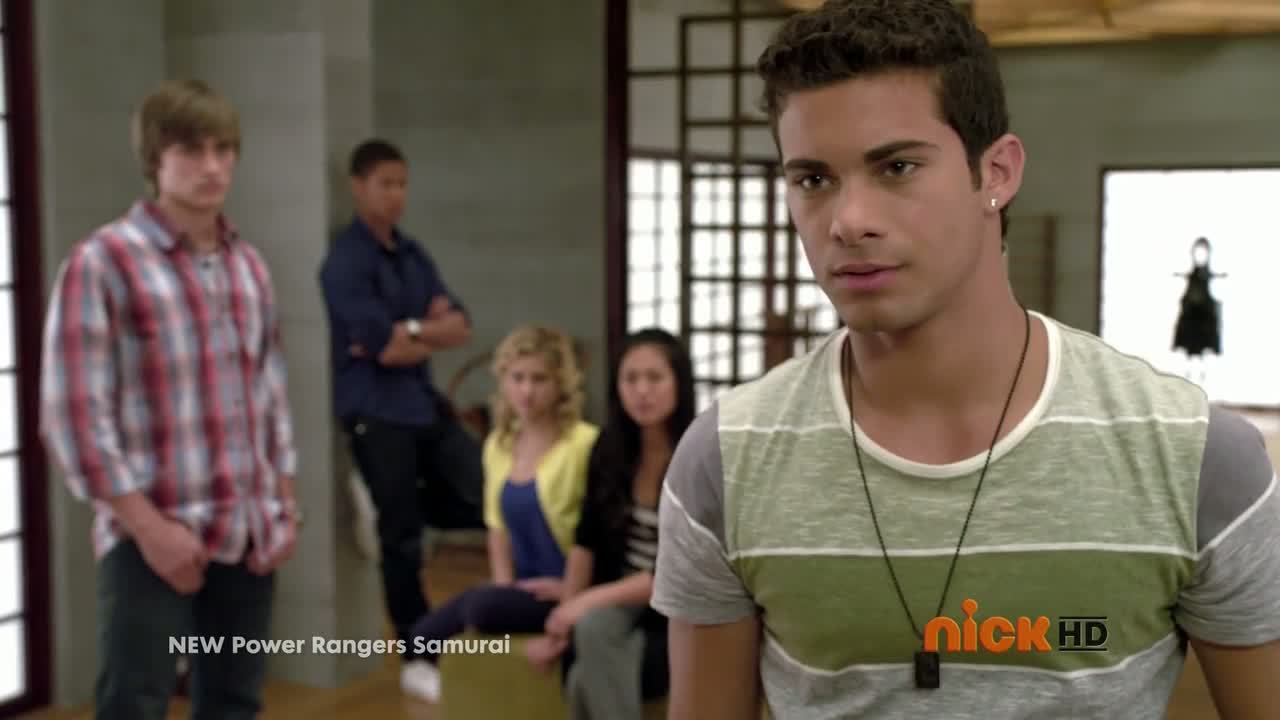 The Rangers are dividing up the three new discs they reacquired.
Jayden keeps the Tiger Disc and since he caught it, Kevin keeps the Swordfish Disc.

For the Beetle Disc, Mike fully expects to be the recipient, but Mentor (Jii? Or are they dropping that?) says Mia is the most capable and in control of her symbol power to handle the disc.

This upsets Mike and he heads outside to train hard while the others eat lunch. Emily tells the others he’s been working overtime lately. And Mia feels bad for being given the disc. (???)

Mentor says that even though he’s been trying, he needs to work harder and has to listen (as if he’s been stubborn and rebellious all this time).

A Nighlok arrives and makes it rain down on people, causing them to become self-deprecating. The Rangers take off and morph. They decide, hey let’s use the new discs. But the Nighlok shoots at Mia causing the disc to fly up into the air. Mike goes to catch it and instead of handing it back to Mia, he puts it on his spear but can’t get it to work, letting the Nighlok get away.

Mentor lets Mike have it back home and asks him to hand over his Samuraizer. Mike is suddenly indignant and uses his symbol power to mess with Mentor using the leaves of a plant that ends up falling to the floor and breaks. He takes off.

Kevin wonders why Mike was acting so childish, but Mia and Emily are on Mike’s side and feel Mentor made a mistake in giving the disc to Mia. (Talk about self-deprecating.) 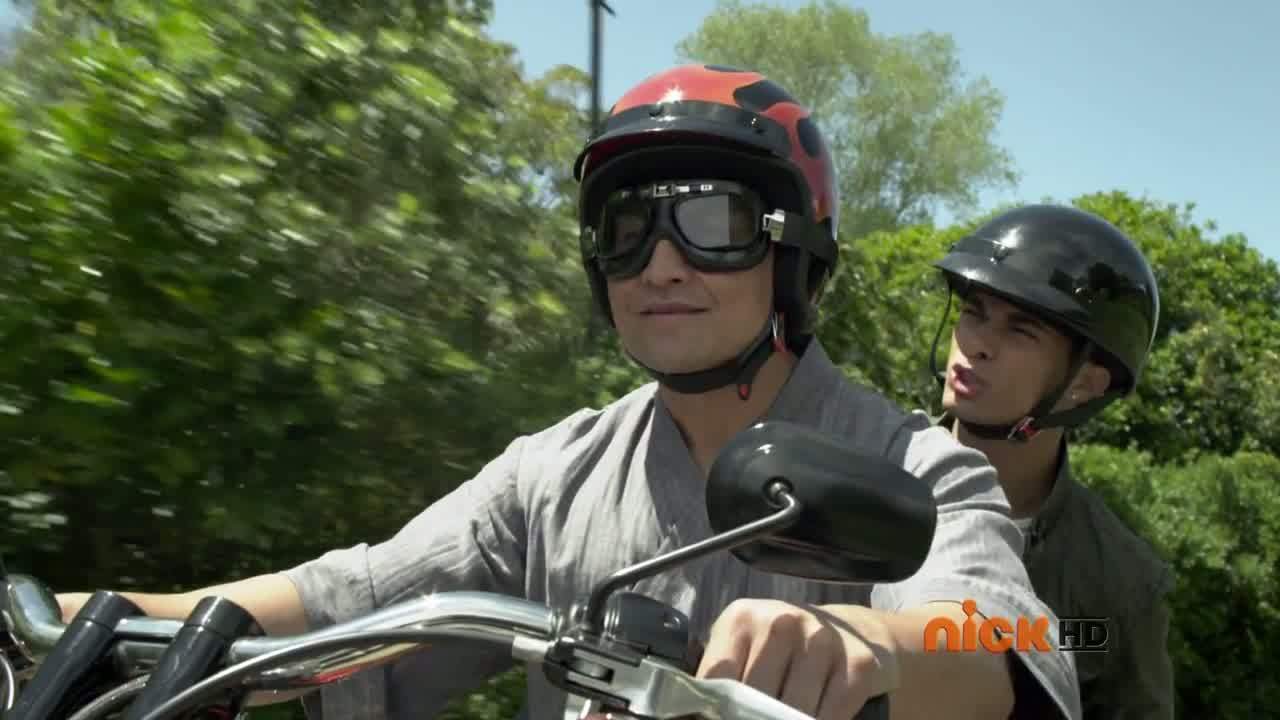 Inside, Jayden mentors Mentor and tells him to understand Mike a little better.

Mentor arrives at the arcade on a motorcycle and takes Mike into the forest and tells him to connect with his symbol power, the forest. He hands him back his Samuraizer and apologizes. Mike apologizes as well.

Jayden calls Mike for help when the Nighlok returns and he runs off to help them. When the other four are down, Mike takes the lead and defeats the first life of the Nighlok with a full understanding of environmental issues and conservation.

With the second life, they zord up and Mia hands Mike the disc. So the three guys combine into the new Samurai Battle Wing and finish off the Nighlok with the help of “girl power” (is that an official zord power?).

Back at home, Mike gives Mentor a new plant to replace the one that broke. 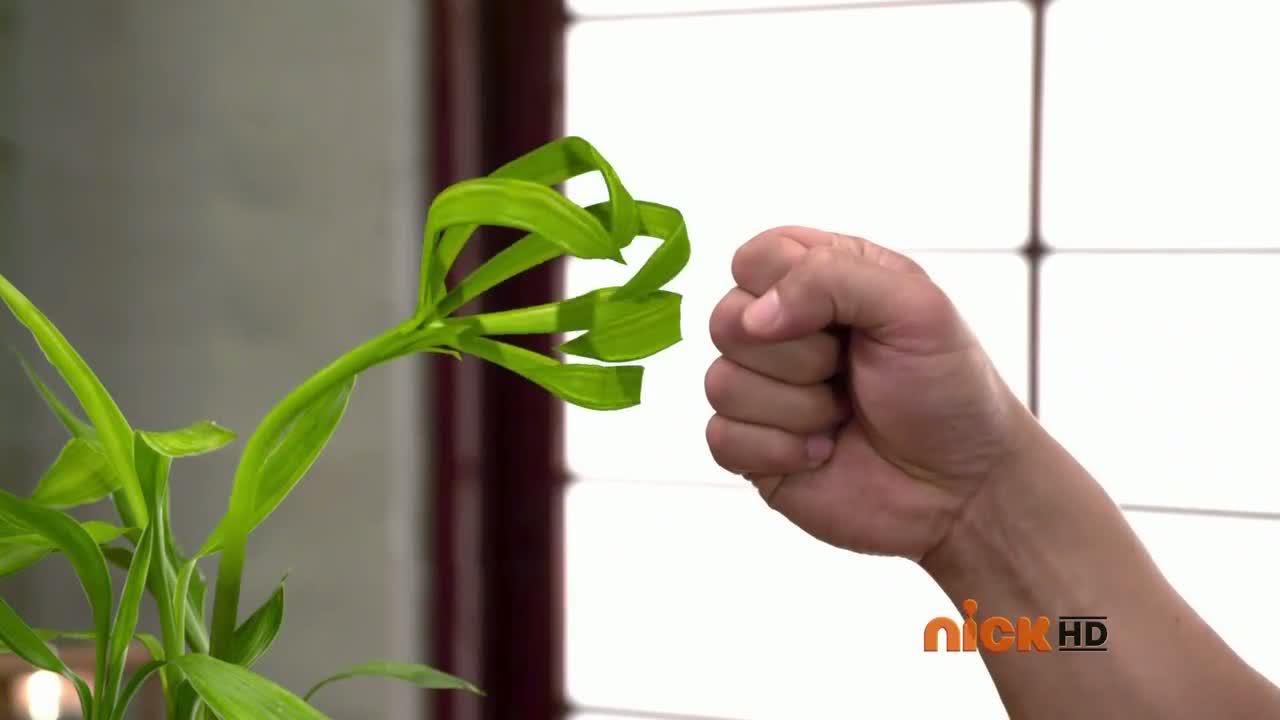 …to highlight why Saban and Co. need to ADAPT instead of TRANSLATE.

Did they seriously just plug the scripts into Google Translate?

Mike is not Chiaki. Kevin is not Ryunnosuke.
Chiaki was stubborn and driven by his want to be the best and to best Takeru. Mike is a goofball, a fun loving guy who loves pizza.
Ryunnosuke was over-dramatic and self-deprecating (see: standing in a water fountain to punish himself). Kevin… well, Kevin is not much of anything really. He certainly doesn’t think he’s lame (even though he is).

But they still copied the story and even included the horribly out of place line…
“Everyone’s so glum, it’s like everyone’s become Kevin.”

No… that absolutely does not work on Samurai! A hilarious line in Shinkenger turned into a WTF moment (one of many) on Samurai.

I seriously have no idea why they insist on translating Shinkenger word for word, scene for scene, shot for shot. Multiple zooms and all.

They seemed to have crammed environmentalism and dreaming big into this episode. Not to mention using their saved up puns from the last two weeks.

But on a good note, it was nice to see Ricardo Rick Medina in the opening credits. But they ruined his one good scene by throwing in a stupid line about the most epic fracking duel or something at the end of it.

And finally… are they just laughing at us by continually showing scenes from the “lost” premiere? That quick flashback to Jayden summoning a horse using symbol power is supposed to be from the REAL first episode of Samurai (it was in the premiere of Shinkenger).

That plus the clips of the “summoning” just adds to the annoyance.

Sentai or Power Rangers?: Sentai
Corresponding Shinkenger Episode: Act 10 – The Great Sky Combination
Well, really by default, Shinkenger had the better episode since it was actually written for Shinkenger and the Shinkengers themselves.

Honestly, PRS is turning into a schizophrenic character-driven series because of the direct translations. What worked for Shinkenger will not always work for Power Rangers Samurai.

What made the episode even worse is while both kind of downplayed the disc being given to a girl, Samurai pushed it even further by basically treating the girls like they were just for show. GIRL POWER! Really? Plus Mia and Emily basically feeling like they don’t deserve any power because there’s another guy on the team without it. And Mike thanking Mia for being a good friend when she gives him the disc after he goes all-diva (out of nowhere, mind you) and walks out.

Recap: Power Rangers Dino Fury, Episode 21 – “No one wants to put the ones they love in danger.” + Check-In Review