Ace wakes up with apparently no memory of the DGP. He leaves for his day of being a big star. Tsumuri tries to express her disapproval of Girori’s interference in the game, but he says it is necessary in order for the DGP to survive.

Later, Girori speaks with the gardener who is surprised that Geats has been eliminated. But the gardener says that means it’s time for his Jyamatos to run the world and he has the perfect Last Boss to make that happen. Girori warns him not to underestimate the remaining Riders.

The Final Boss begins rampaging in the city and Tsumuri sends Keiwa, Neon and Michinaga off on this final battleship round. They must protect the city until the threat passes. Player with the most points will win the DGP and have their desire granted.

Michinaga is set on going straight for the Last Boss. Keiwa and Neon try to take on the minor Jyamato to ensure the peoples’ safety for now. Both Michinaga and Keiwa notice that the Jyamato Riders seem to utter some memorable lines from their dead DGP competition.

Keiwa and Neon feel hopeless and say they only got this far because of Ace the God. Without him, they have no chance. Michinaga tells them to quit their moaning and declares he will take the win. Girori believes that will be the case as well. Michinaga tries to force his way onto the Last Boss ship, but gets swatted back to the ground.

When his photoshoot is interrupted by Jyamato, Ace hurries outside and finds the others as they are struggling. Ace tries to help Michinaga up and warns him to not be reckless. Michinaga doesn’t listen and is determined to avenge the needless death of DGP players at the hands of their selfish rivals.

Neon screams that Michinaga should not reject everyone else to do so. But Michinaga takes a couple of steps in the direction of the Last Boss only to get engulfed in a huge explosion. He is forced to dehenshin.

Ace hurries over to Michinaga who wants to know what makes them so different. Michinaga remembers Ace telling him to keep at it until he eventually wins the game. But now wonders if it was just a lie.

Michinaga removes his Driver and pushes it onto Ace’s chest. 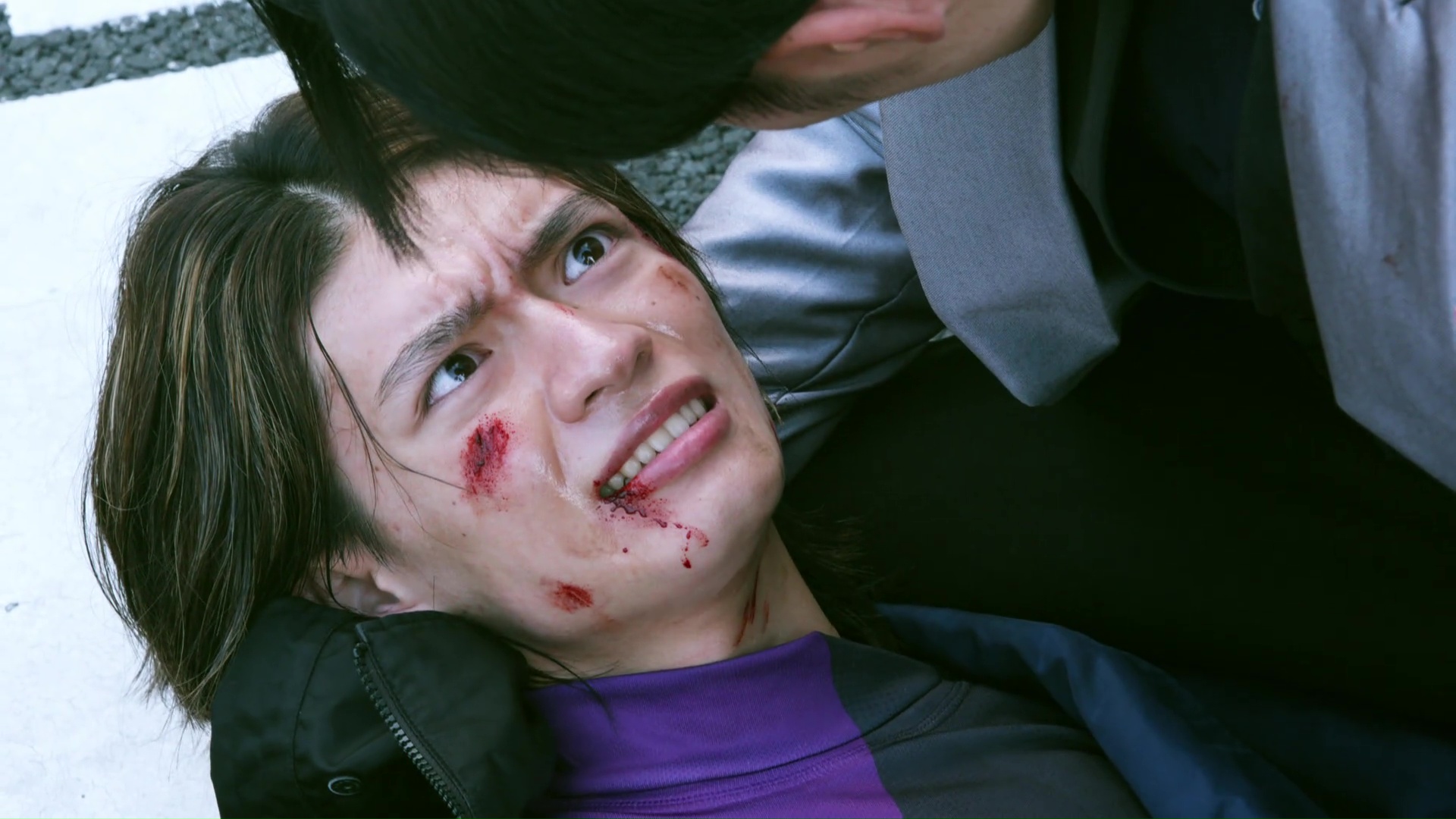 “If you mean it… prove it. Give me something to make me believe in you.”

Ace hurries over to Keiwa and Neon and whisks them back to safety at the DGP green room where Girori asks what he’s doing here. Ace says he got his memory back once he touched Michinaga’s Core ID. And then proceeds to reveal to Keiwa and Neon that Girori is Game Master.

Ace asks for his Geats Core ID back. Not to beg for his spot back in the game. But to help support the remaining Riders in order to not have the Jyamar Area be destroyed. He says he knows Girori would hate that.

Girori wants to put his faith in Keiwa and Neon. But with realizing the Jyamato have something to do with dead Riders and all his insecurities, Keiwa is not sure he can go out and fight. Neon agrees that they are not strong yet.

Girori gives them a Boost Buckle to help them out and convince them to keep fighting. But Ace says they are not pawns and they will fight only if they choose to do so. 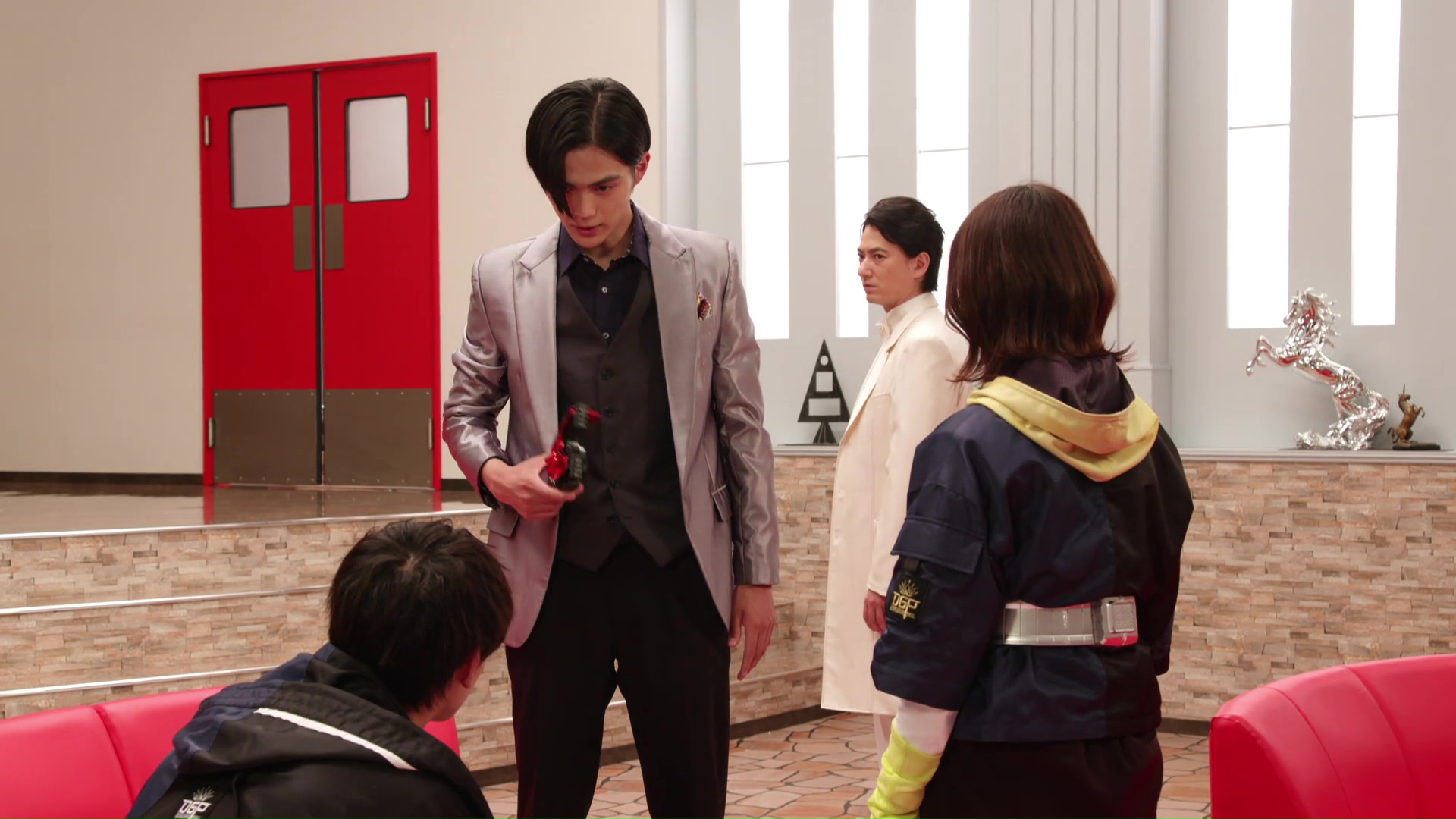 When Girori asks why Ace wants to fight then, Ace says he just wants to protect this, his world. Ace takes the Boost Buckle, but Girori reminds him that he is no longer qualified to be a Rider.

Tsumuri says that is not true. Ace is still qualified because his original granted wish was to be able to compete in every DGP season until he dies. Thus, Ace will always be Kamen Rider Geats no matter what.

Ace reveals that he had left secret messages to himself around his room in order to point him in the right direction whenever the time came that he would be eliminated and memory-wiped. That way, he would always have an opportunity to regain his memories and find his way back to the DGP.

Tsumuri gives Ace his Driver and Core ID and he hurries out to the Jyamar Area to battle regular Jyamato first.

Back at the green room, Neon says she knows about her father being a DGP sponsor. Keiwa wants to know what the DGP is hiding from them. Tsumuri says it might be time to tell them. But Girori tells her to shut it.

DGP executive Niramu, watching the live feed, celebrates Geats’ win as being a dose of “realism.”

But Ace wonders why the game is not over yet. Tsumuri tells him to head back to the DGP for an announcement.

They don’t call him “Ace” for nothin’! Ace knows all. Ace does all. Ace is all. Everything. Everywhere. All at once!

Nothing in this episode was a surprise. Perhaps the closest thing would be Michinaga’s “death.” But when the episode starts out with revealing the Jyamato Riders are somehow connected to the dead DGP players and then specifically reminding us of Keiwa’s desire… I think it’s pretty obvious Keiwa will win the DGP. Before Michinaga’s death, I assumed maybe next “season” or the one after that.

But considering Ace has unlimited lives in the game, Keiwa could very easily win this season in order to bring Michinaga quickly back to life. And bringing back a character like Morio also allows some filler in the antagonist role until we get to the DGP villains too.

Also considering DGP rules can twist and bend however Girori or whomever random board member wants, they could throw in a Neon win this season and then make the next season of the DGP have just a few players and be only one round or something. Then Ace could be back in the god seat, no problem.

Then of course we have the rule reveal for this episode being the season isn’t over until Game Master says it’s over. Well then, the season could go on all the way to the end of the Geats season if Girori or any other Game Master wants.

I don’t mind random, off the cuff rules. This isn’t The Amazing Race, after all. It’s a Squid Game-inspired competition where anything goes depending on the whims of people in power. The main conflict or mystery of the season is who is truly behind the DGP, how it began and what does Mama Yukiyo have to do with anything. Oh, and figuring out the Jyamato nursery too.

Just to add on, what a lame way to reveal Girori’s identity to Keiwa and Neon. And I just had to laugh out loud at Michinaga’s “Give me something to make me believe in you” line.