Murasame has brought Sonoi’s dead body to the Noto Council elders. They are shocked by Sonoi’s demise, but commend Murasame for bringing him here and would like to grant him anything he wishes. Murasame says he would like his freedom, though he will continue to use his power for the Noto.

The red elder says Murasame escaped before fully maturing and is unstable as a result. Murasame says he will learn and reach completion on his own.

Murasame visits Mother and asks if this was the right decision. She tells him that he did well, but he is unsure of his existence. Where did he come from and where is he going? Mother says all he has to do is continue to fight. And through this battle, he can reach completion.

Over at Shirokuma, Tarou bites into his jumbo cutlet sandwich to find a funeral invitation in it. He heads to Donbura and plays the hologram message for the others. The Council is inviting Tarou to Sonoi’s funeral, but in order to attend, he must bring…

The message is choppy because of the cutlet sauce. Anyway, the others believe this could be a trap and offer to accompany him. Tarou says they don’t have to. He was the one that killed Sonoi, so he must go on his own. Plus, he has something he’d like to say to the Council.

Just then, Tarou disappears from the café and finds himself naked in a bath for purification purposes before the funeral. He is being waited on by Noto assistants.

Meanwhile, Sonoza wonders why he and Sononi weren’t invited to the funeral. Sononi says mourning the dead isn’t very productive. Instead, she wonders what Sonoi’s final words to them meant: “If something were to happen to me, seek out Murasame.”

Back in town, a Juto is attacking an Anoni and is about to suck it up. But Murasame arrives with Mother telling him to protect the Anoni. Before Murasame can chase after the Juto, Jirou arrives to challenge him.

Jirou asks what Murasame is, but he does not answer. As they battle, abunaiJirou takes over and senses Murasame’s sorrow that he felt before. abunaiJirou says he does not want to waste his time fighting someone who wishes to die.

Just then, the Juto appears and is about to attack abunaiJirou from above. But Murasame shields him and impales the Juto with his sword, killing her.

Sononi and Sonoza watch this all unfold and understand what Sonoi was trying to tell them: Murasame might be the only one who can take on the Juto.

abunaiJirou explains to Murasame that there was only one of him when he was born. He was resolved to dominate and become the ultimate warrior. But one moment changed all of that.

abunaiJirou remembers when Rumi and his friends first approached him when he was a kid. They have him sit in the middle of them as they form a circle and play Kagome Kagome. After they finish singing, Jirou correctly guesses who is behind him. And at that point, the other Jirou emerged.

“He was someone who would laugh along with those who stood behind and in front of him.”

Jirou takes over control of his body. Murasame asks what he should do now and what it even means to live. Jirou says he too has the same questions and believes that’s why there’s two of him. He and abunaiJirou will figure it out together.

Murasame says there is also two of him, “isn’t that right, Mother?” Mother says that is right and from now on, she will try to listen to his feelings more.

Over in the Noto world, Tarou has just finished teaching the masseurs how to do a proper massage before he is treated to some traditional Noto food. He stops a servant from feeding him and says one must eat with their own hands.

Tarou gives the food a try, but it has no taste. Still, he will eat it anyway because they have been so hospitable.

Murasame grows weak and Mother tells him to rest for now. He hops into the sword and flies away.

Meanwhile, Tsubasa is running away from the Juto Sayama when the Ninjarksword comes flying in and into his hands. The sword seems to possess Tsubasa and he leaps over crates to slash at the Juto who ends up running away.

Juto Natsumiho zooms in and comes face to face with the Ninjark’d Tsubasa. She senses that this is not ordinary bloodlust and quickly flies away.

Sononi and Sonoza find the Ninjark’d Tsubasa. As he attacks them, Sononi tries to get Tsubasa to snap out of it saying that this type of fighting does not suit him. She grabs the sword from him and it possesses her now.

Tsubasa has no idea what just happened.

Over in the Noto world, Tarou is led to the hall where Sonoi is lying in state. Dancers are performing around the coffin that is filled with flowers.

The Council elders welcome Tarou and want to praise him for his strength in defeating Sonoi. Tarou says he does not care about that, so the elders tell him he can offer his condolences now.

Tarou says he has nothing to say, but he does have one regret. He promised to go on an oden date with Sonoi, but never got the chance to.

Tarou thinks about what that would’ve looked like with Sonoi enjoying his first taste of delicious food.

Tarou says the main reason he came here is to complain about putting the funeral invitation in his sandwich. Because of it, he lost his appetite. So, not wanting to waste food, Tarou wants the elders to eat it instead. He tosses the sandwich to them and tells them to savor it and not just swallow.

As Tarou turns to leave, the elders announce that it is time for the final ritual. The dancers leave the room and Sonoi’s Noto form emerges from his body to fight Tarou.

Tarou senses that this is not the real Sonoi, so he chops his head off. Turns out he’s right and that this Sonoi is just an empty puppet. Tarou laughs at this pointless ritual. But when Tarou sticks his word through the fake Sonoi, it drains him of his power.

Back in the human world, Sonoza is able to knock the sword from Sononi’s hands. Shinichi grabs it and he too gets possessed. He fights Haruka and Tsuyoshi.

Tarou is transported to the scene. He tries to henshin, but it does not work. Tsuyoshi and Haruka are able to knock the sword out of Shinichi’s hand and it lands right in front of Tarou. 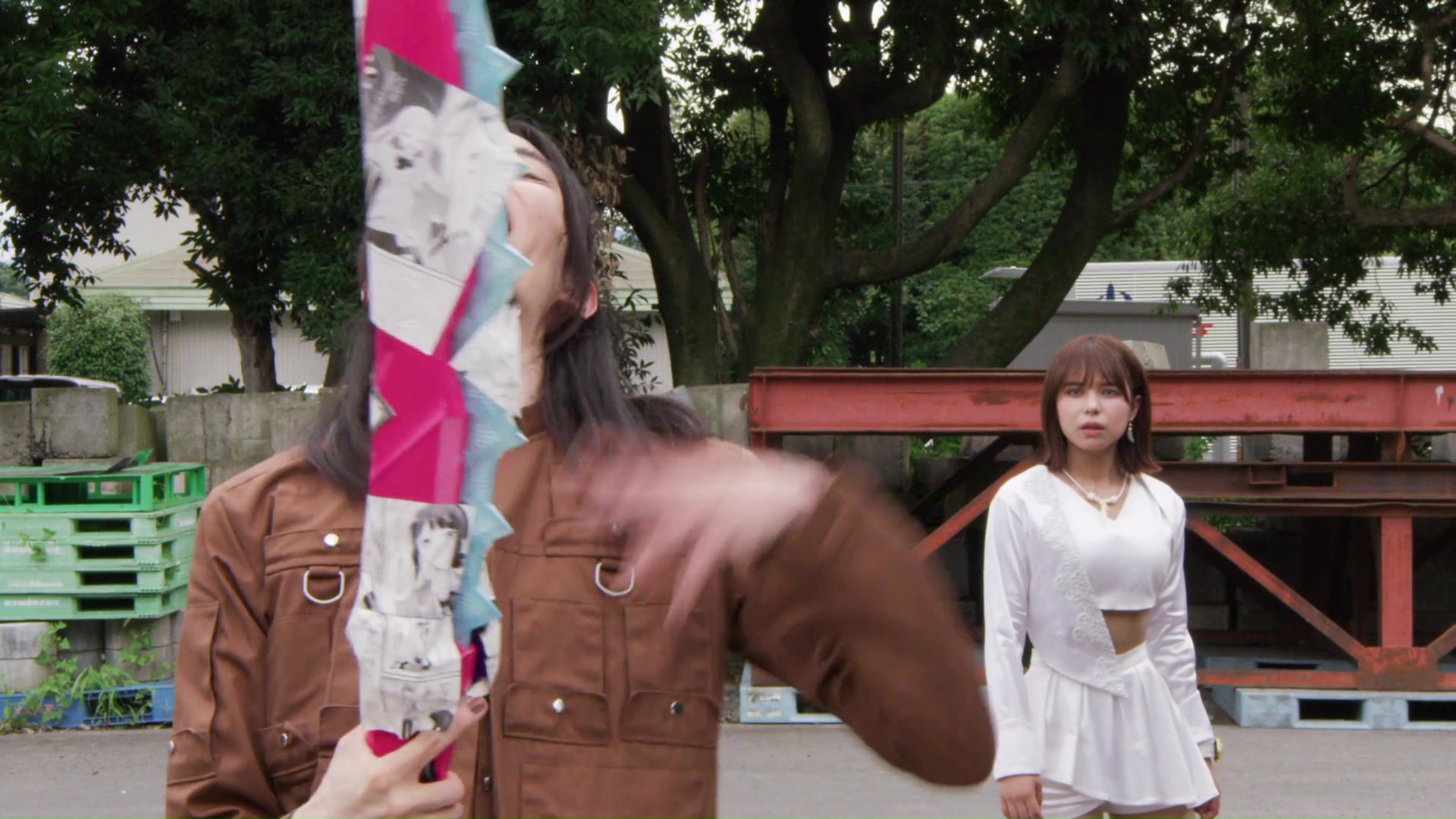 Later, Sononi and Sonoza find the Ninjarksword. Sonoza decides to seal it with pages of Hatsukoi Hero.

Over in the Noto world, the Sonoi suit is laid next to Sonoi. They twist his head off and pour its liquid contents into the coffin. Sonoi opens his red eyes.

A very full episode with lots happening, but I’m not sure if I understood everything that did happen. Lol It’s definitely one of those Donbrothers episodes that kind of touches on everything in little bites.

We got some insight into Murasame even if it was a bit sudden. It was resolved pretty quickly too since Mother was much more understanding that she has seemed to be so far. With there being two sides to Murasame who himself was just created by the Noto, it’ll be interesting to see how that plays out. I hope he doesn’t just become a power-up of some sort. And instead he does reach “completion” or singularity or whatever.

With Jirou, it was very interesting to get that flashback to his childhood. So he was abunaiJirou before he was able to make friends which then opened up the other side of his personality. I wonder if that could play similarly with Tarou. Or at least, with the way that Tarou also grew up with some loneliness. But not have an abunaiTarou take over his body.
But the idea behind it does play in to the idea of people being overcome by their desires (inner demons?!). Different parts and pieces that make up someone’s complete person. (Hello again Murasame!)

And then there’s the Noto seemingly wanting to genuinely learn about these strange things called human emotions. Instead of their hollow shells, they will soon be filled with those feelings and knowledge that they’ve never had.

Elsewhere, it’s always nice to see JutoNatsumiho pop in. I’m all for a tragic ending to the Tsubasa-Natsumi romance and Sononi swooping in to dry his tears. Yes please! Lol Sononi finally learning what love is! Woohoo!

I think learning more about the Juto will play in to Tsubasa’s eventual joining up with the Donbros. I think you can’t really do one without the other. That is, revealing what the Juto actually are and what their true goals are alongside Tsubasa (and Tsuyoshi) learning the truth about their loves and the Donbros eventually coming together for real.

Finally, we got more of the Tarou-Sonoi bromance. All the Tarou scenes in preparation for arriving at the funeral hall were randomly amusing. But I guess it made sense in the end as he needed to be prepared for whatever that power juice they extracted from his was to revive Sonoi. Or at least, a red-eyed Sonoi for now.

Overall, a solid episode. Lots of things happening. And it was in typical Donbrothers-style. Slowburn is real. And I’m certainly invested in the long game. But I hope hope hope that this will all be very satisfying soon enough.

Non-CGI Donbro of the Week