Vice draws Ikki back into the family photo. He apologizes that the contract can’t be changed. But Ikki accepts that this is the life of a Kamen Rider.

Mama Igarashi calls them in for dinner. But Buu-san suddenly appears to give them an update on Papa Igarashi. He is now in Weekend hands where he was able to have an emotional reunion with Sakura. Papa Igarashi apologizes to her for causing them to worry.

Papa Karizaki says Vail has been written out for now. And until the show decides to pick that plot point back up, Weekend will keep Papa Igarashi in hiding.

Vice points out that the family is all scattered around in pieces. But Mama Igarashi takes issue with his pessimistic assertion and says the Igarashis are the best fam ever and will overcome everything. Ikki is sure their family will be whole again in the future.

Aguilera sulks in an empty aquarium remembering the happy, joyous memories when the Gifu cultists used to chase her around when she was a kid. Simple times.

Next morning on the way to school, Sakura asks Hikaru what made him join the Weekend. But he reminds her that she is to mind her own business while a member. She says there’s nothing wrong with being a bit more open. Unlike Tamaki who is much too open.

Tamaki appears and tells Sakura to come visit the spa soon. But he’s really just following her around in the hopes that he’ll find Aguilera who he knows stalks Sakura. Sure enough, Aguilera pops up. She lets Tamaki fall on his face as she approaches Sakura and challenges her to end her.

Sakura is initially reluctant to fight until Aguilera calls her chicken. Sakura henshins and they battle.

At Fenix, Daiji reports the disturbance to Director Akaishi. But the director says to just let them be. They’re not important.

Daiji, George and Doctor Akemi talk about the director being sketch. Doctor Akemi tells the guys about seeing him talking to Vail. She says she’ll go digging herself, but Daiji tells her to be careful.

Tamaki and Hikaru watch their women fight. But Aguilera is able to repel Sakura’s Lovekov attack. Lovekov seems to be feeling off and that cause Sakura to dehenshin. Aguilera can’t believe this nonsense and leaves.

That evening, Sakura visits home to tell them about what happened. Ikki wonders if Lovekov is being affected by Gifu’s revival. Vice suggests Sakura is just overworking Lovekov.

Sakura says Aguilera feels different too. She thinks Aguilera was goading her into defeating her. Tamaki says Aguilera probably just wants to end herself on a high note after losing her glory as the “queen of evil” with all the adoration of their Deadman acolytes. Tamaki acknowledges she did some evil things, but she shone much brighter back then. A far cry from how dull she is now.

Sakura asks Ikki to separate Aguilera from her demon. He says Aguilera doesn’t even want that. But Sakura doesn’t want her to end herself. Ikki says they should hire demon-less Aguilera after all this is over.

At Fenix, Doctor Akemi sneaks into Director Akaishi’s office where she is shocked to see all the Vistamps that were supposed to be destroyed. Director Akaishi kicks her face, shows her Gifu’s eye on his palm and laughs maniacally as a pair of Giftarians appear to the screams of the doctor.

At Weekend, Papa Karizaki says there’s nothing wrong with Sakura’s Driver. But Lovekov’s issues must be Sakura’s doubts getting passed on to her. Papa Ushijima tells Sakura to finish off Sakura next time they meet. Hikaru, understanding Sakura’s hesitation, tries to soften the situation. But Papa Ushijima tells him to sit down.

Sakura confesses that she wants to return Aguilera to human life. Papa Ushijima and Papa Karizaki says Aguilera will suffer no matter what happens next. “Righteous paths can exist without them being the correct ones,” Papa Karizaki advises.

Next morning, Daiji asks George if he’s seen Doctor Akemi. They look at CCTV footage and see her sneaking into the director’s office right before he walks in as well. Daiji hurries over to confront the director who feigns ignorance.

Before Daiji can lay into the director some more, Fenix officers alert them to Giftarians that have popped up downtown. Daiji hurries over to take care of them.

Meanwhile, Tamaki finds Aguilera on a rooftop. He begins telling her how much he means to her and asks if she can grant him one wish. But before he can continue, she shoves his face to the ground when Sakura arrives with Hikaru as well as Ikki.

Ikki invites Aguilera to work at Happy Spa as a human. “Are you f-ng serious?” she asks as she clenches her fists. She says she misjudged Sakura.

They all henshin. Sakura tells Lovekov to go hide as the battle begins.

Aguilera is frustrated that Sakura does not understand her wishes. Ikki and Sakura continue with their humanization plan. Sakura is on one knee as she begs and pleads with her brother to save Aguilera.

Ikki prepares a Thunder Gale. Tamaki cries, saying this is not what Aguilera wants. Suddenly, an angry Lovekov bumps into Sakura and enters the Driver. The Driver short-circuits and pops off Sakura’s waist, causing her to dehenshin.

Sakura remembers Papa Karizaki saying Lovekov is absorbing her doubts. So as Ikki is about to deliver the finisher at Aguilera, she runs over and shields her. Ikki swerves out of the way and is forced to dehenshin upon impact with the ground.

Aguilera pushes Sakura off her. “WTF are you doing?” Vice asks. Sakura apologizes and says she has to be the one to do this thing. 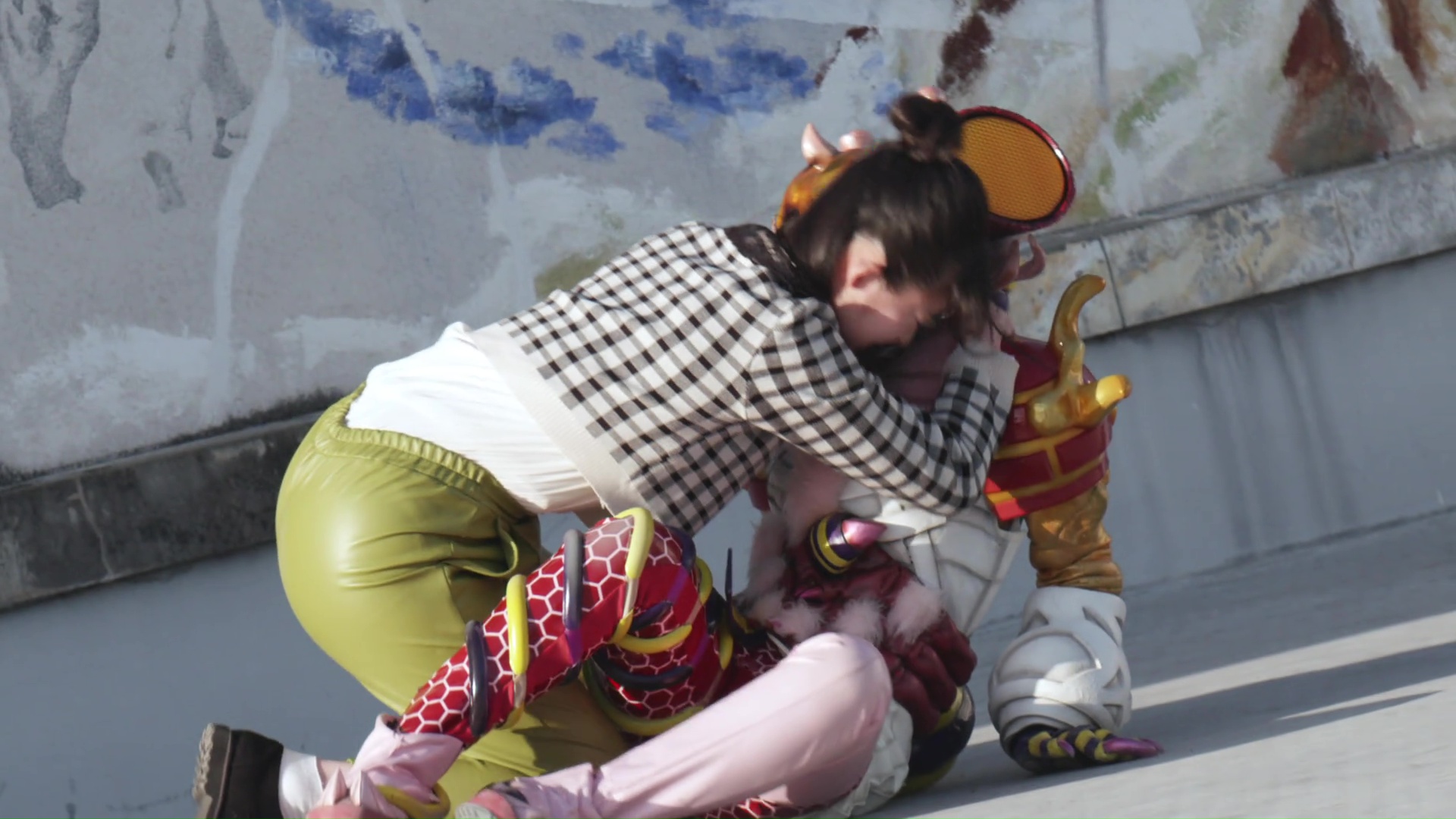 I love how this episode ended exactly where it began. Like, in a “We’re right back where we started” kind of way. What was the point of it? lol

Before we get to this forbidden love plotline or whatever, let’s talk about Buu-san randomly popping up at Happy Spa at the beginning. Which of course was just a reminder that Papa Igarashi still exists and is apparently perfectly fine. We had what should’ve been an important moment in Papa Igarashi and Sakura’s first post-Vail reunion just pass by like a throwaway line.

I guess they’re saving Papa Igarashi’s journey to recovery for another TTFC miniseries.

But really, they’re obviously still focused on family being the heart and soul of the season. Yet they’re either shortchanging all of the potential story for the Igarashis in favor of other, less interesting things. Or just shuffling any actually good story away behind TTFC’s 960 yen paywall.

Anyway, speaking of less interesting. This episode was, I guess, setting up the decisive battle between Sakura and Aguilera who are still in denial that they love each other or something. I actually just realized we have a love square, not love triangle with Tamaki-Aguilera-Sakura-Hikaru. They’ve completely dismantled Juliamaki so much, I forgot he existed. But he’s still there, yearning for his Aguilera-sama. Basically two guys chasing after two girls who want nothing to do with them.

Seriously though, that would be a much more interesting story to tell than what we’re getting with them.

Now, Aguilera feeling lost and stuff is actually a story that would make sense. She was kidnapped as a child and literally groomed to become the wife of an old block of wood. The first lady of the cult. Of course she will feel lost when she ends up back with the commoners.

But in cutting the Deadmans out so early, the show kind of undermined any idea of Aguilera being queen bee. Or as Tamaki put it, “queen of evil.” No no. She was no queen of evil. And she isn’t a queen bee just because her Driver says so. We barely saw anything close to that. We might started seeing the beginnings of it. But especially not after that premature revelation of Olteca pulling the strings and Aguilera being just a figurehead of some sort.

Perhaps if the show had kept the Deadmans around longer. Have Aguilera be a boss for a longer period of time. Maybe even up until Gifu’s resurrection. Or better yet, made that slap from Gifu a few weeks ago be the moment of realization that she was not going to marry some wooden sugar daddy. Then we could’ve had something.

But instead, we have Revice‘s version of Kento’s sulking about last year. And dare I say, Saber actually did it better. *GASP* Yeah! At least with Kento, I actually believed he was all messed up from the shit he saw while he was in the dark sword place. Even though his story eventually went nowhere in the end. With Aguilera, this whole decisive battle with her rival-turned-lover Sakura feels like the climax to a story we actually didn’t get in-series. Are they also saving that for a TTFC original?

I dunno. If next episode brings about the end to this plotline, then thank goodness. I’m over it

Elsewhere, Director Akaishi continues to be as creepy as can be. That scene with the eye palm and kicking Doctor Akemi was completely nutso and disturbing. Part of me wishes he had been a fixture from the beginning if only so he didn’t feel like he came out of nowhere and is now supposed to be the main villain’s right hand man. Or right palm. Whatever.

What is happening to this show? lol I cannot remember a season that I started out loving so much to now I’m at a point where I’m all…

Watching this episode after having watched the beautiful Dear Gaga this past week is definitely a wild contrast.

Good Ol’ Review: “Kamen Rider Revice: Battle Familia” a Reminder of What Could’ve Been for the Main Series