Daiji can’t stop worrying about Hiromi. Kagerou pops up to taunt Daiji about being all mopey and suggests they trade places. Daiji tells him to shut up and leaves. But Kagerou reminds him that they are one and the same. 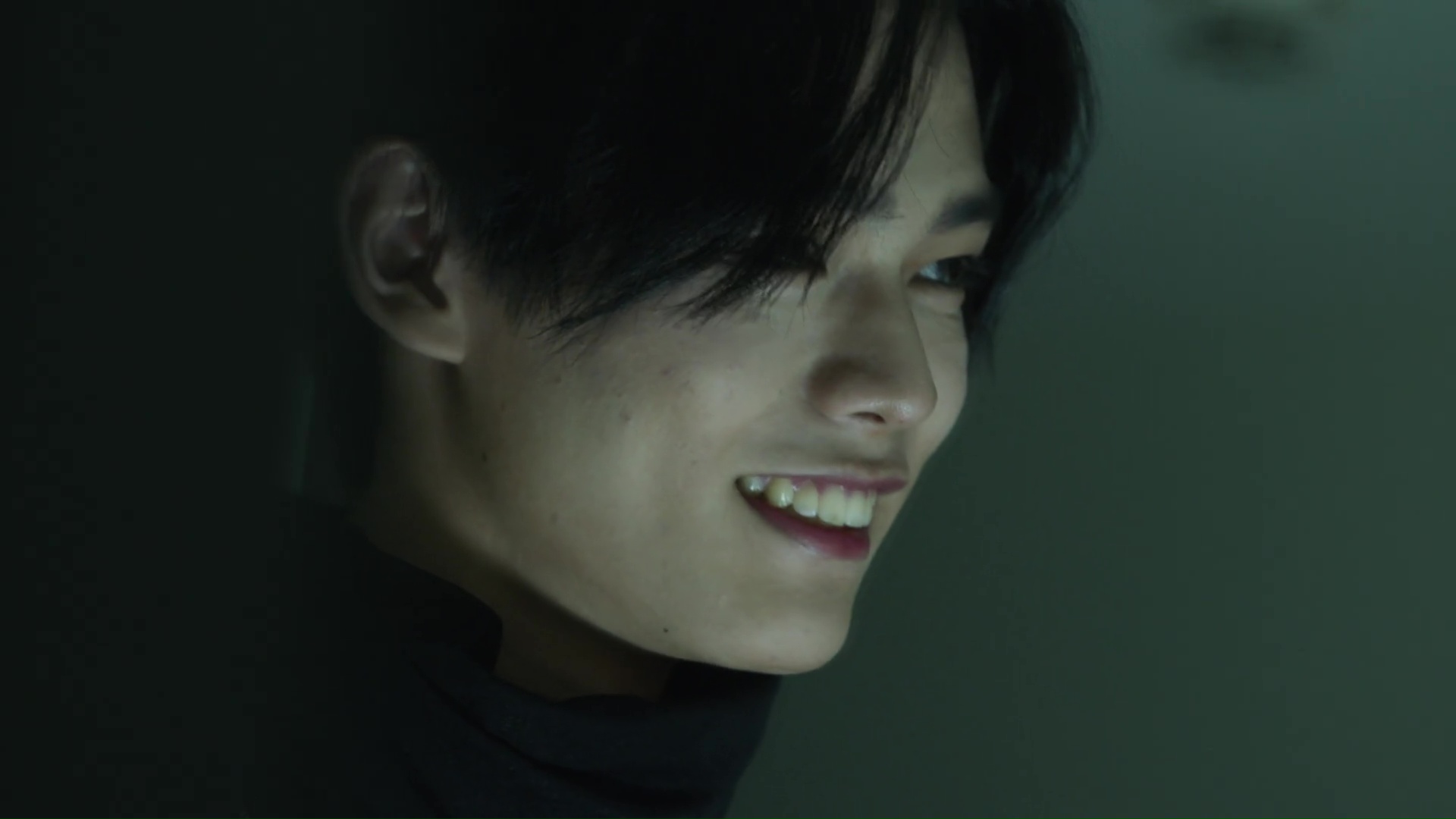 While Olteca has a chat with the Demons Driver, Aguilera is sitting in the middle of a plaza with a cup of coffee thinking about Sakura pointing out how something seems to be holding her back. Julio brings her some ice cream, but she dismisses him since he is of no use to her anymore. She gets up, leaving him in shock.

At the Spa, Ikki is annoyed by George’s seemingly nonchalant nature after what happened to Hiromi. But George says he’s just here to freshen up ahead of the memorial service for his father’s death anniversary. 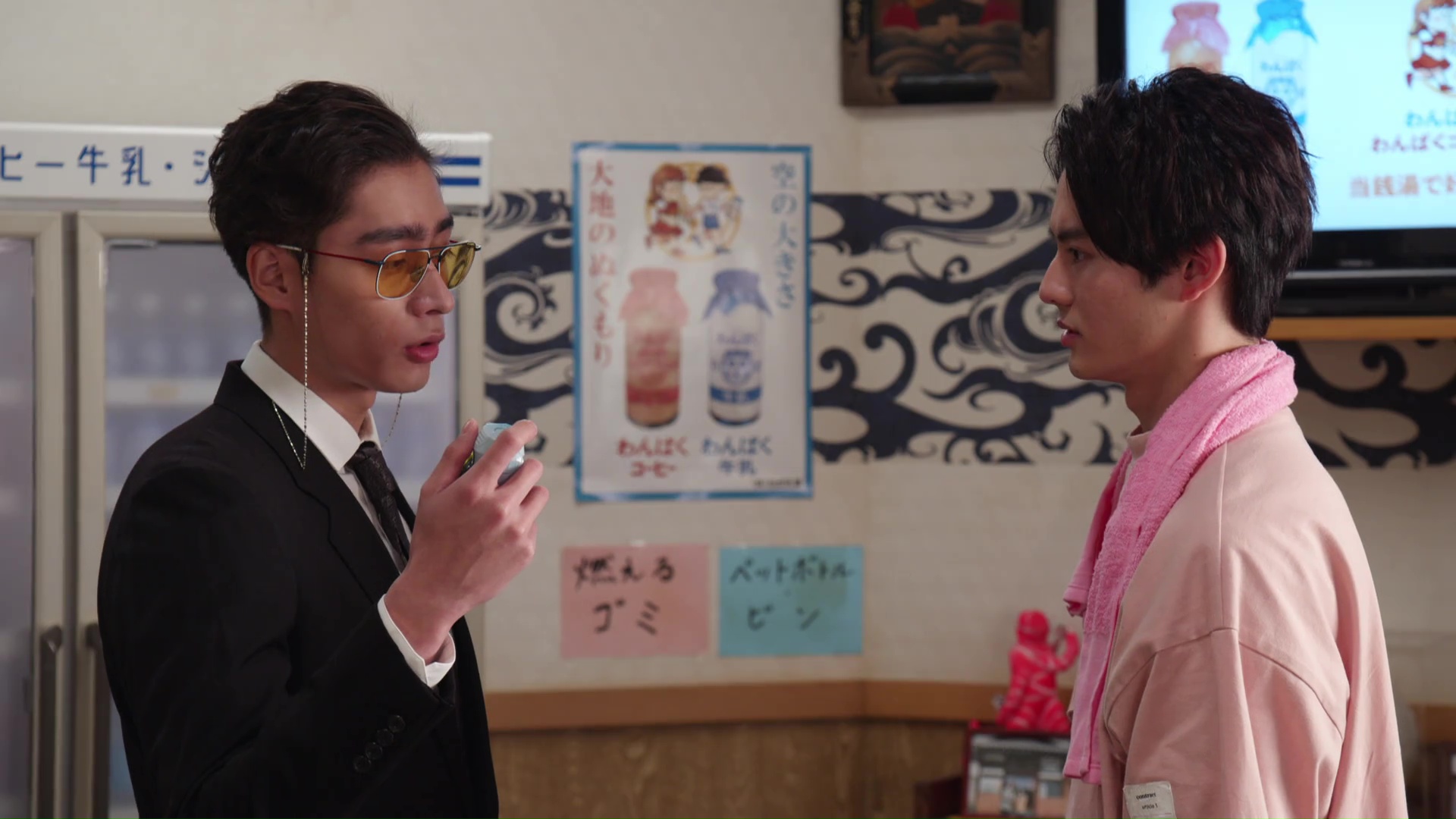 Mama Igarashi notes how different George looks in a suit and tie. He tells Ikki he’s envious of him having both his parents alive. Anyway, George has a new Neo Batta Vistamp for them. Ikki is snarky asking George if this is another one of his experiments. George understands where he’s coming from, but reminds Ikki who created the Revice Driver in the first place.

As George leaves, a man and woman come in with a potential Deadman-related concern. They are from a talent agency and their popular comedic duo Kuuki Kaidan is receiving threats. Manager Mayu and her boss have narrowed down the suspects to two other comedy duos. Papa Igarashi suggests Ikki and Vice form a comedy duo to go undercover.

Ikki and Vice head over to the audition for a show and the judge is quickly amused. He gives them the thumbs up and tells them to get a five minute concept ready for filming tomorrow.

Ikki and Vice meet with Manager Mayu and Katamari, one-half of Kuuki Kaidan. The other half, Mogura, is running late. Katamari says he doesn’t have any suspects in mind and he just figured someone wanted to knock them down a peg after they’ve become so popular.

Just then, Mogura comes stumbling into the room in just his underwear. He gets on his knees and apologizes for oversleeping. Ikki introduces himself and asks if Mogura can give them some tips for video content. Mogura says no. 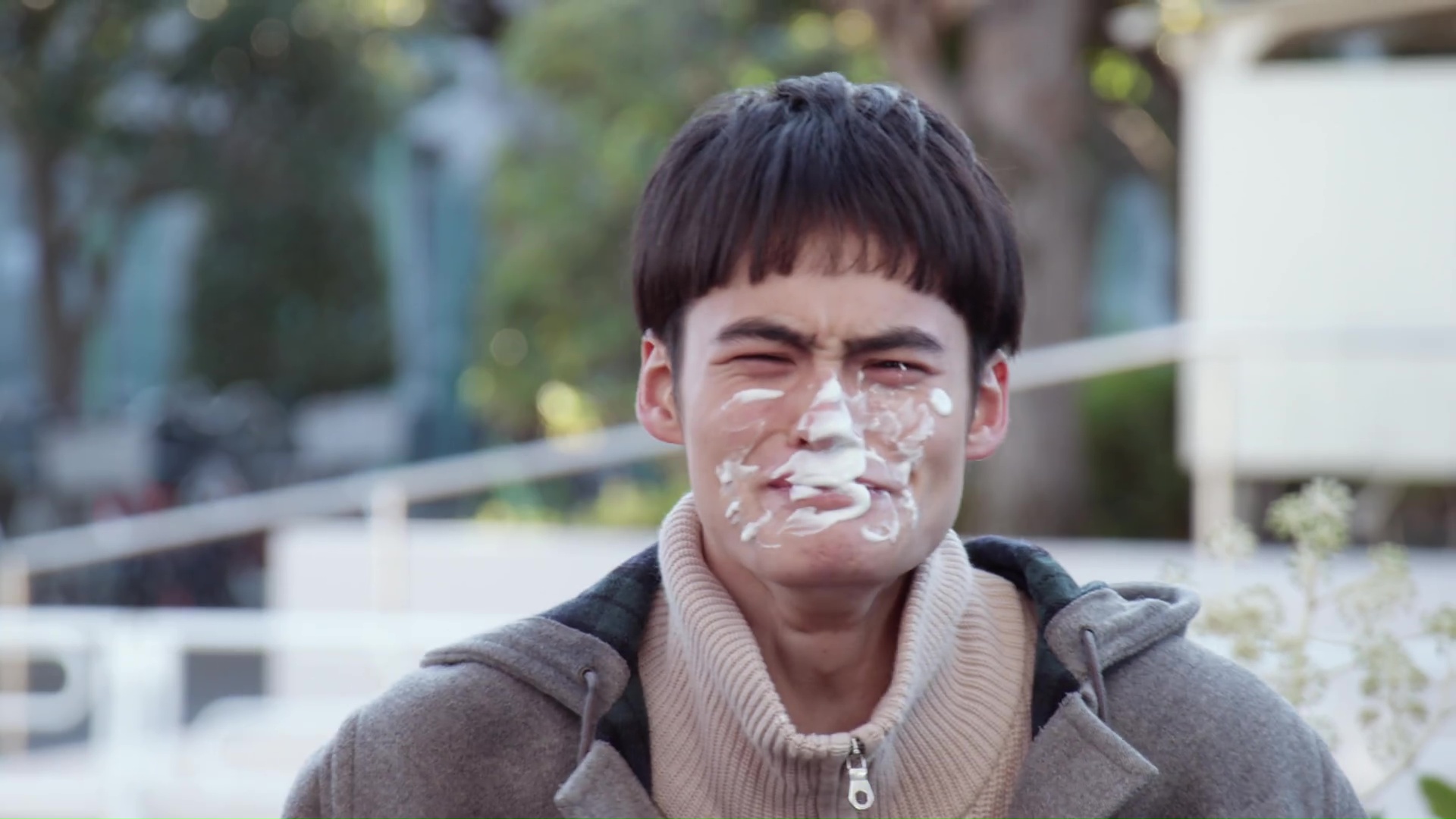 Downtown, Sakura is eating cake with her friends. But she can’t help thinking about her meeting with Weekend. Suddenly, Julio pops up still holding the ice cream from yesterday, now melted. He starts crying as he tells Sakura that Aguilera has thrown him in the trash.

Back at the network studio, Ikki and Vice listen in on two other duos gossiping about Kuuki Kaidan: Kashiwamochis and the senior duo Pavlov’s Dogs.

Ikki quickly dehenshins when Vice is in pain again.

When the Kashiwamochis come up to the rooftop, Ikki and Vice confront them. But the duo have no idea what they’re talking about. Ikki and Vice turn their attention to Pavlov’s Dogs, but they’ve already gone home for the day.

Over at Fenix HQ, a still worried Daiji meets with Director Akaishi and asks about the search for Hiromi. The director is very apathetic to the situation and says Hiromi is easily replaceable. He expects a lot from Daiji in Hiromi’s place.

Doctor Mikoshiba later tries to cheer Daiji up by giving him some of the same black coffee Hiromi used to love. 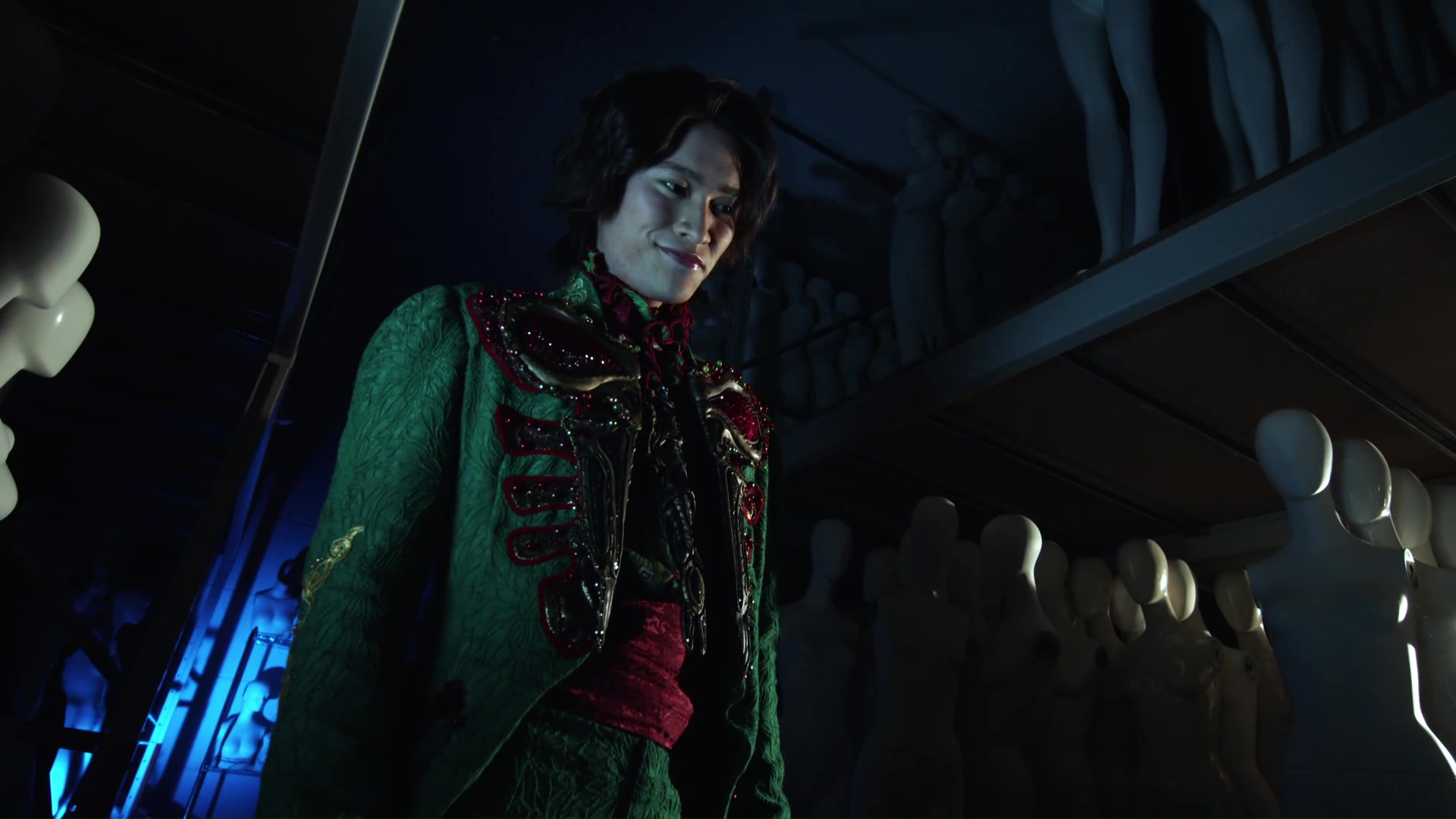 Meanwhile in mannequin land, Aguilera meets with Olteca and proposes they team up. Olteca laughs at her, but she says they share the same goal of retrieving her beloved Gifu-sama from the enemy.

At the Spa, Ikki and Vice try to piece together what they know so far, but they aren’t making any progress. Anyway, Ikki says it was fun seeing all the different kinds of duos today. Kind of like how they are a duo as well. Vice says there must be a lot of things you can only experience on your own though.

Vice is excited thinking about what’s next for them two. Ikki says only the best of course.

Suddenly, a Fenix officer comes in with a new, interestingly-shaped Rolling Vistamp from George to help stabilize Vice’s recent difficulties.

Sakura comes in, hoping to speak with her brother. And that is to talk about allowing Tamaki to move in with them. Next morning, Sakura is introducing Tamaki to her parents. He is grateful that they’ve allowed him to stay.

Papa Igarashi asks Sakura if he’s her boyfriend, but she responds by punching her heartless and sick father in the stomach.

At the network, the director is scolding Manager Mayu for Mogura not being on time again. Pavlov’s Dog offer themselves up to take Kuuki Kaidan’s place for today. 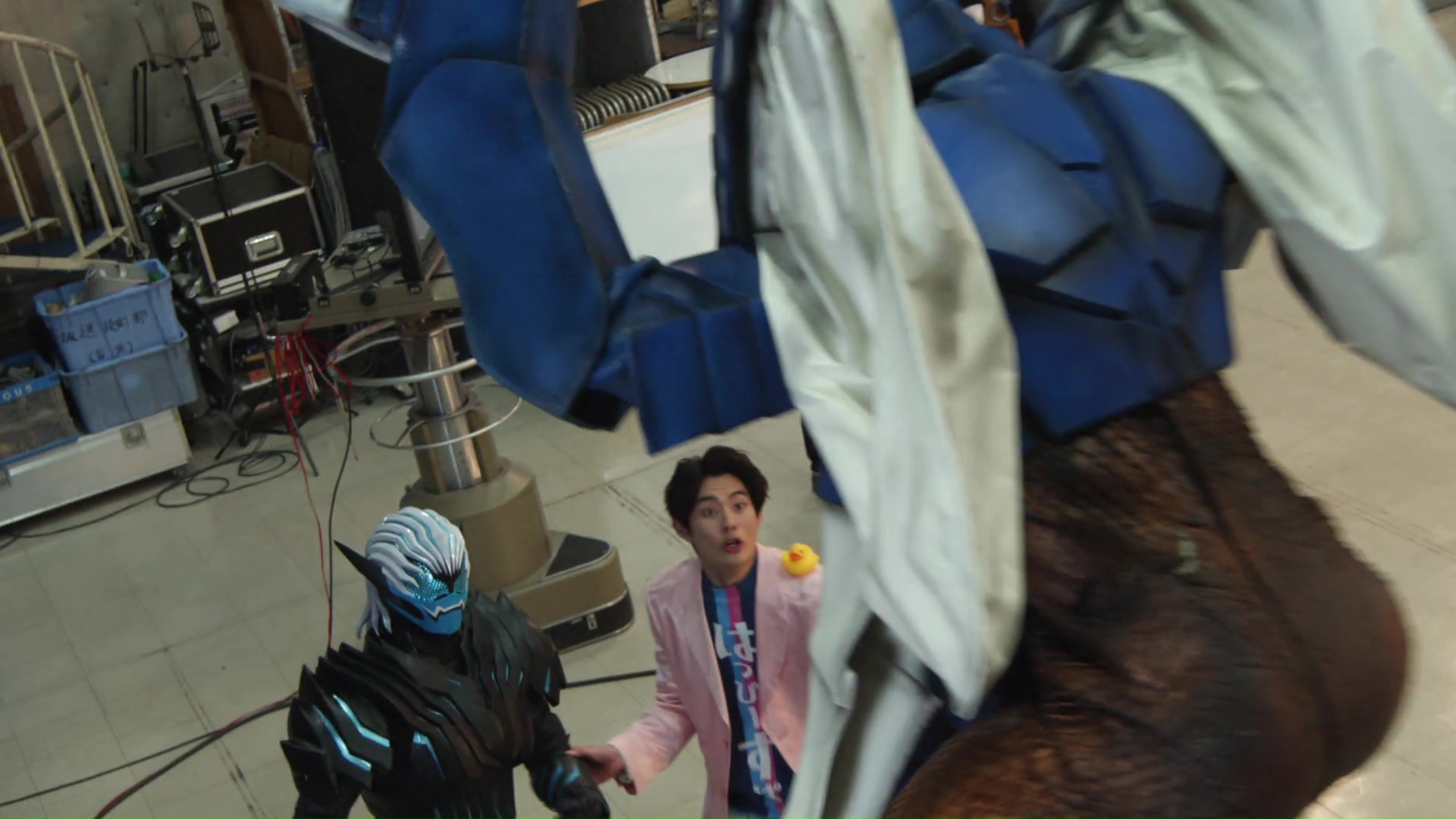 Manager Mayu explains to Ikki and Vice how Kuuki Kaidan has been oddly “busy” since winning the competition. She was their biggest fan even before they made it big.

Manager Mayu excuses herself when she gets a call. And just then the two Deadmans appear. Ikki and Vice henshin and take the battle outside. Daiji arrives and helps people evacuate the area.

Ikki and Vice try delivering a finisher at the Deadmans, but Vice gets a headache. He begs Ikki use the Rolling Vistamp.

Watching from Fenix HQ, George is absolutely incensed as he never made such a Stamp and vows to make whoever created it pay.

Vice is surprised to find himself on his own, but makes the most of the situation and relishes the opportunity. Daiji watches in awe as a newly-powered up Vice makes easy work of the Deadmans.

Vice dehenshins and lets out an evil cackle, Ikki nowhere to be seen.

Not gonna lie, I was checking the clock very often during this episode. I was honestly just waiting for it to end. This appeared to be the typical “breather” week after a big, heavy episode. But instead of being a welcome calm after the storm, it just felt very kinda weird and out of place.

After so much happened last week, all of it felt like it was put on hold. It was sort of an abrupt halt to what had been very good momentum in terms of story and character development so far. I mean, no Weekend? Just a passing mention of Hiromi?

I guess the main takeaway from this episode is the mysterious Rolling Stamp that allows Vice to go solo and Ikki to be on the inside this time. I guess it’s a bit interesting paired with Kagerou randomly popping up to remind us that he’s still inside Daiji. It all plays into the idea of a demon possessing a human body. And as the opening credits tease, it’s possible Vice takes over Ikki’s body in the future much like Kagerou did to Daiji. (Though not like Olteca or Julio? I have no idea. Lol)

I do appreciate Kagerou being used much better here than the last time he randomly appeared. Now that appearance was bad. But it’s always great to see Wataru Hyuga get to play Kagerou again.

Speaking of Daiji, I wouldn’t mind seeing Doctor Akemi turn out to also be on the nefarious side. The way she gave Daiji that black coffee was very sus. Lol Almost looked like she was drugging him and about to seduce him. Very awkward vibes from that moment lol

I just wondered, what if the good doctor has Hiromi imprisoned somewhere. She must have some part to play in Hiromi’s story specifically for the show to have introduced her in this way.

And Aguilera tossing aside the only person who’s on her side like he’s irrelevant garbage? All because she’s eager to resurrect her husband-to-be from the dead? Yeah, no sympathy for you madam.

Bring on the Julio-Sakura-Hikaru love triangle instead. Thank you lol

So this was also one of those episodes where they reference the movie that most fans outside of Japan (myself included) haven’t seen yet. Though they didn’t do something as crazy as bringing an actual character onto the show (*cough*Saber*cough*), which is a relief.

I can’t even guess where the Rolling Stamp came from. But it was very refreshing to see George not actually know what’s going on for once.

Anyway, this is certainly not going to be one of my favorites of the year. I don’t think I’ll even remember it next week. Everything from the attempts at humor to the attempts at potentially new things just fell flat, especially compared to the last couple of weeks.