Ikki, Vice and Daiji are able to destroy the Deadman, but Amahiko creates another demon that takes Seiko-san away.

Later, Daiji demands Sakura hand the Driver over. Though Ikki tries to take a more measured approach, Daiji scolds Sakura for putting more people in danger thanks to her stubbornness and not heeding their warning. She made things worse and even got Ikki hurt.

Sakura leaves and Vice notices something lurking within her.

At the Skybase, George doesn’t understand how “karate girl” Sakura has the Driver that he knows he scrapped. But Commander Wakabayashi says their main concern now is the Planarian Deadman. Especially as now the Deadmans can mass-produce Phase-2 Deadmans with one Stamp.

Amahiko is with the Deadman3. Julio asks what Amahiko’s goal is and he jokes that maybe he wants to take over as Gifu and become Aguilera’s new family. Aguilera does not think that is funny. 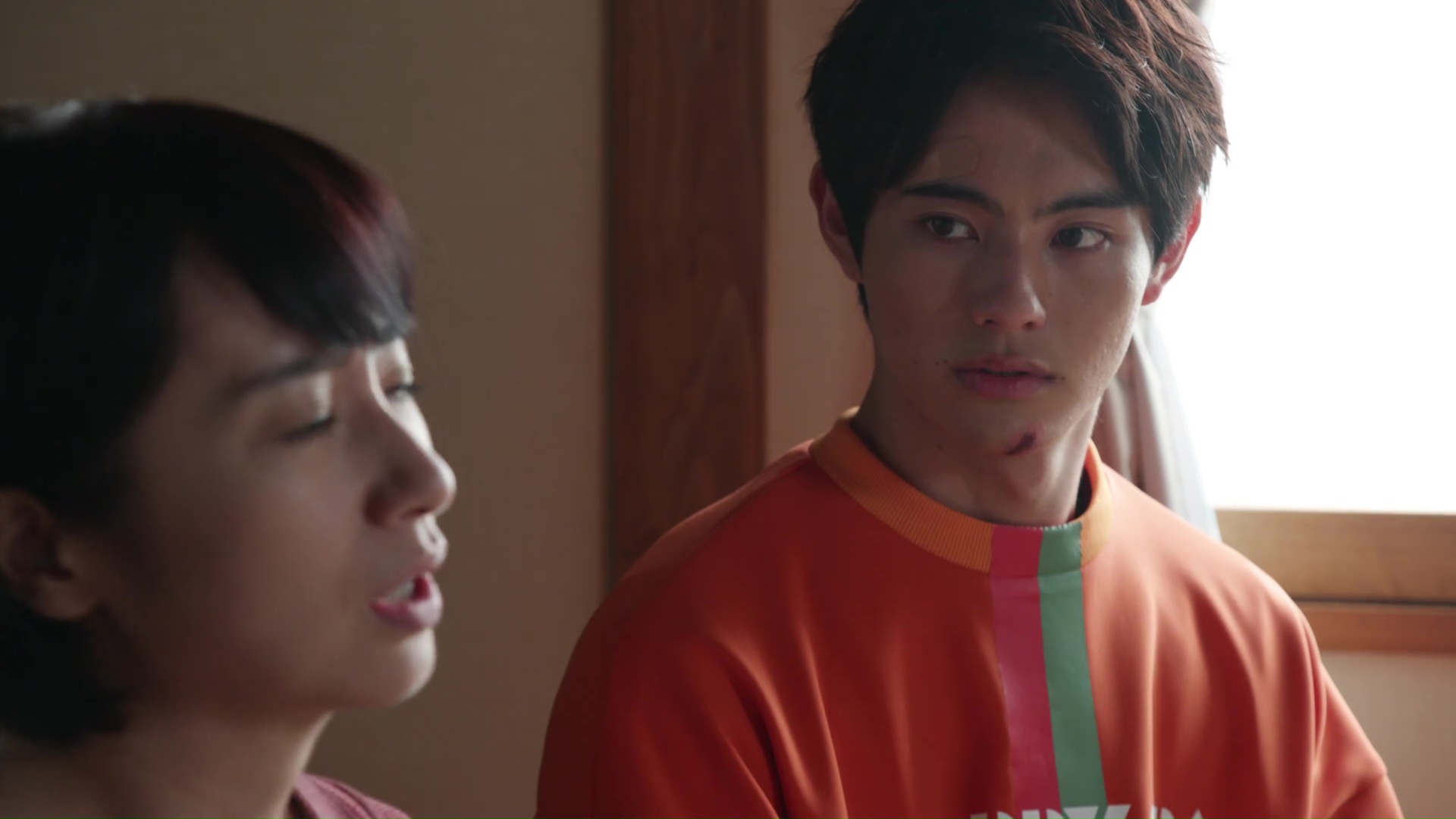 At Happy Spa, Ikki tries to play off his concern about Sakura. But both Mama and Papa Igarashi have noticed Sakura’s behavior as well. Mama Igarashi says Sakura always comes to her with her troubles, but that’s not the case this time. Ikki tells her not to worry and that he will go talk to her.

Sakura is by the river when Aguilera approaches her to ask if she’s made a decision about joining Team Deadman. Aguilera says she’s very thankful to the Deadmans as she’s been with them since she was a baby. They have made her happy.

Sakura says Aguilera doesn’t look happy, but Aguilera snaps at her to say that happiness can come in many forms. 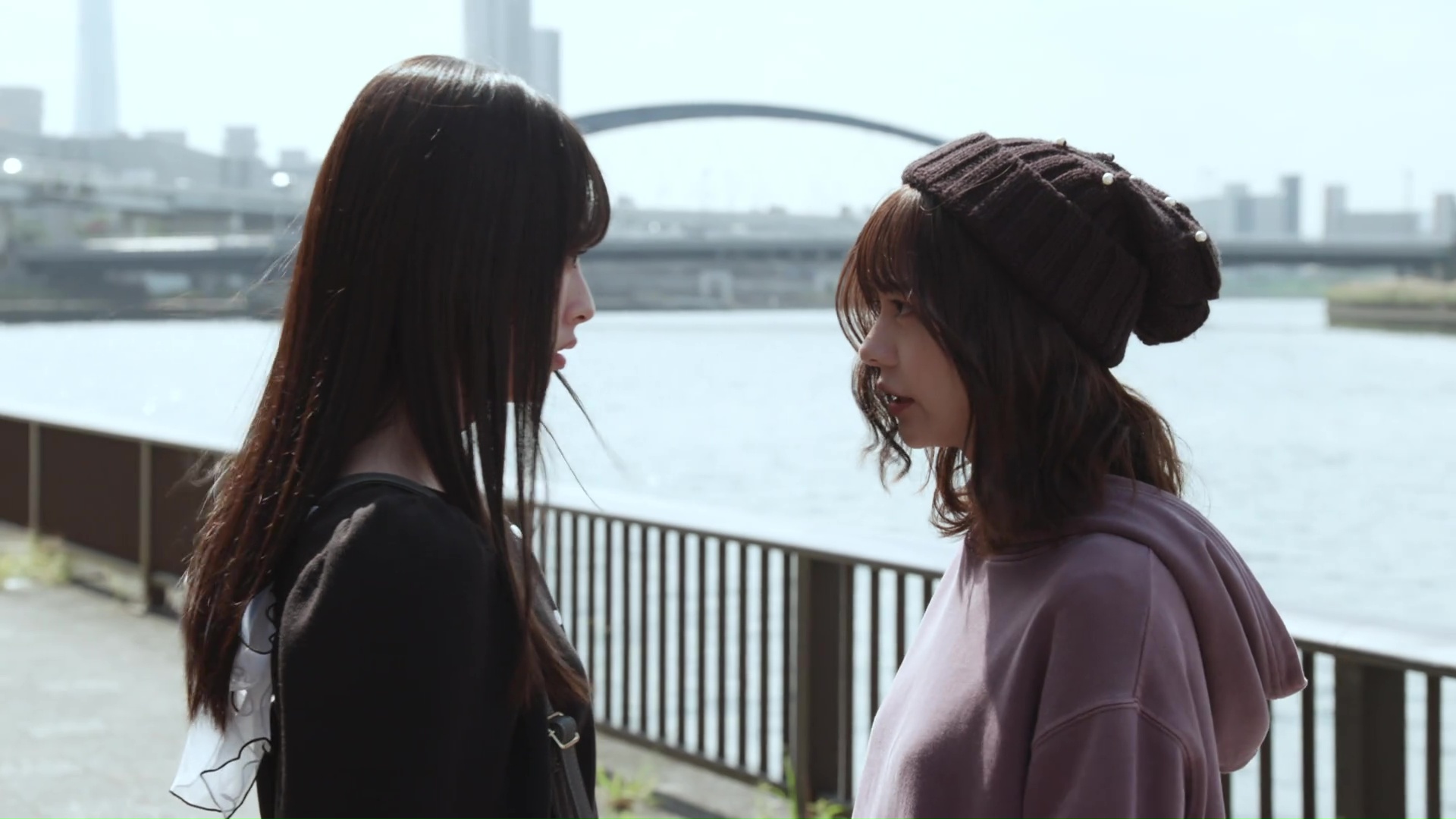 Aguilera leaves after telling Sakura that she will have an easier time henshining if she joins them. Sakura demands they release Seiko-san, but Aguilera says there’s no use in listening to the words of a weakling.

Amahiko and Olteca are watching as the Deadman is rampaging downtown. Daiji and Hiromi arrive as Fenix forces try to subdue the Deadman. Before henshining, Hiromi suddenly confesses that he was bullied as a child. Daiji is taken aback by the sudden admission. But Hiromi says that he always waited for a hero to come save him. Now, he will be that hero for others.

Ikki finds Sakura at the playground from their childhood. She asks why everyone is against her wanting to join in the fight. Ikki admits that it’s because he is afraid of losing anyone from their family. Daiji is the same way, especially as he knows the dangers of actual battle.

Sakura doesn’t understand having to just stand back and watch as people she cares about are in danger. Ikki says he is not here to stop her, but to say he wants to see a truly strong, whole-hearted Sakura.

Ikki gets the call about the Deadman and he hurries over after telling Sakura to drop the tough act since just looking the part won’t be of any help.

Ikki and Vice arrive just as Hiromicchi is down for the count. They henshin and join in the battle that now includes Julio and Olteca.

Sakura is at the dojo and she repeatedly tries to henshin, but is unsuccessful. She falls to her knees in frustration, not able to understand why she is not strong enough.

Just then, Ikki’s words resonate with her and she realizes she was just fooling herself about being strong all this time. She isn’t invincible.

Sakura cries. But suddenly, her inner demon appears to her and she smiles.

Amahiko thinks the end of the Riders is upon them. But Aguilera says not yet. She points over to Sakura arriving at the scene.

Sakura apologizes to her brothers and says she was weak all this time. But not anymore. She acknowledges her weakness and that is what makes her stronger.

Sakura activates her Stamp and henshins to Kamen Rider Jeanne. She has an easy time against the Juniors.

Ikki, Vice and Daiji notice Sakura’s inner demon getting caught in the crossfire. Sakura says the demon represents how she used to be and asks them to help take care of her please.

Ikki tells Vice to go protect her and he hurries over as the cute little demon tries to slither away from more Juniors.

Sakura finishes off her share of Juniors before finishing off the Planarian Deadman and releasing Seiko-san who Vice catches out of the sky.

Aguilera is excited to see Sakura’s triumph. She cheerily calls Julio and Olteca for them to go home. But Amahiko is quite the opposite. He is fuming and he glares at Sakura who realizes he was the doctor who was nefariously comforting Seiko-san.

Before Fenix takes Seiko-san to rehab, Sakura tells her to not give up hope especially since Ryou himself continues to fight. 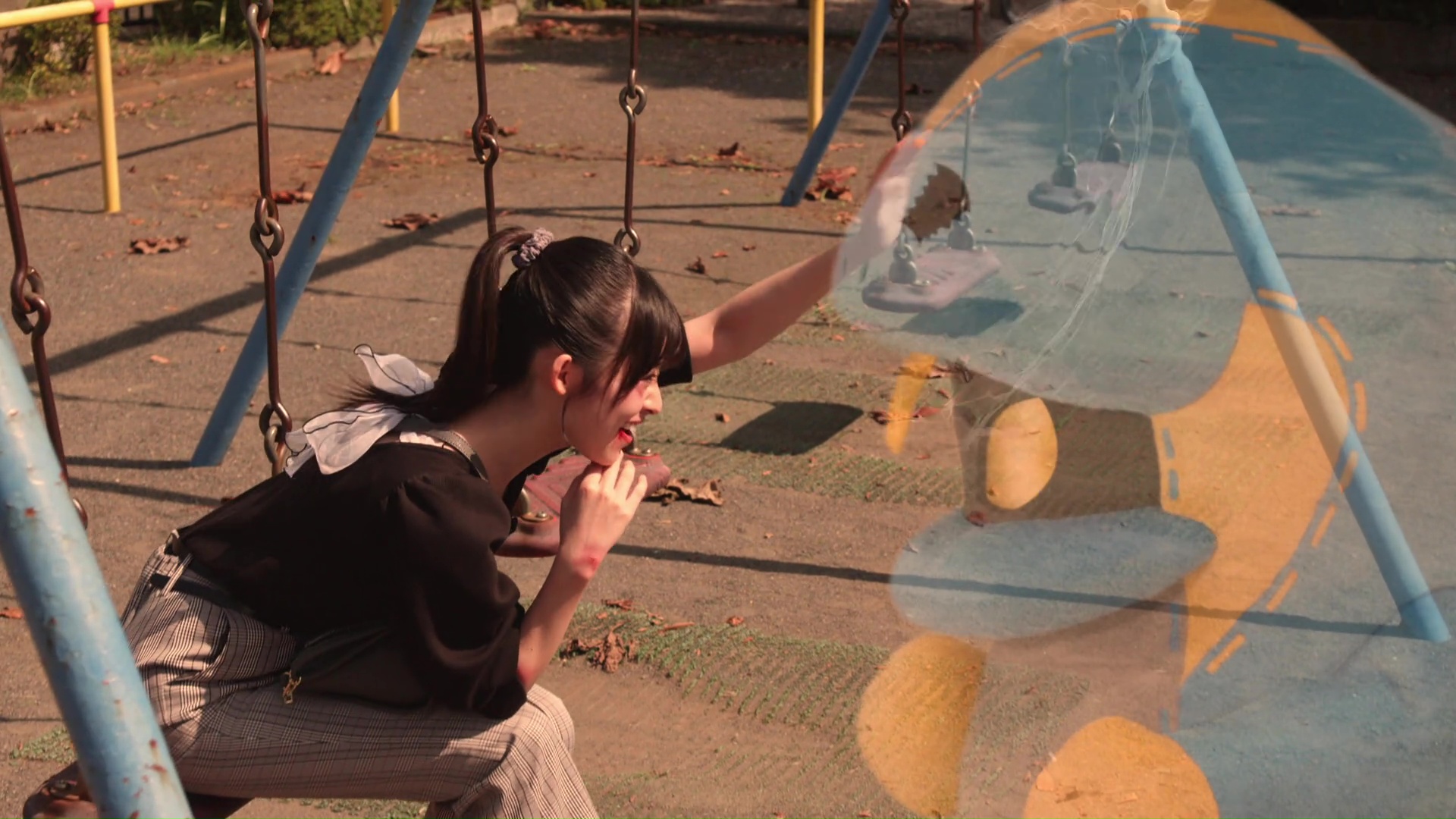 Later, Ikki and Daiji find Sakura at the playground as she happily talks to her demon. 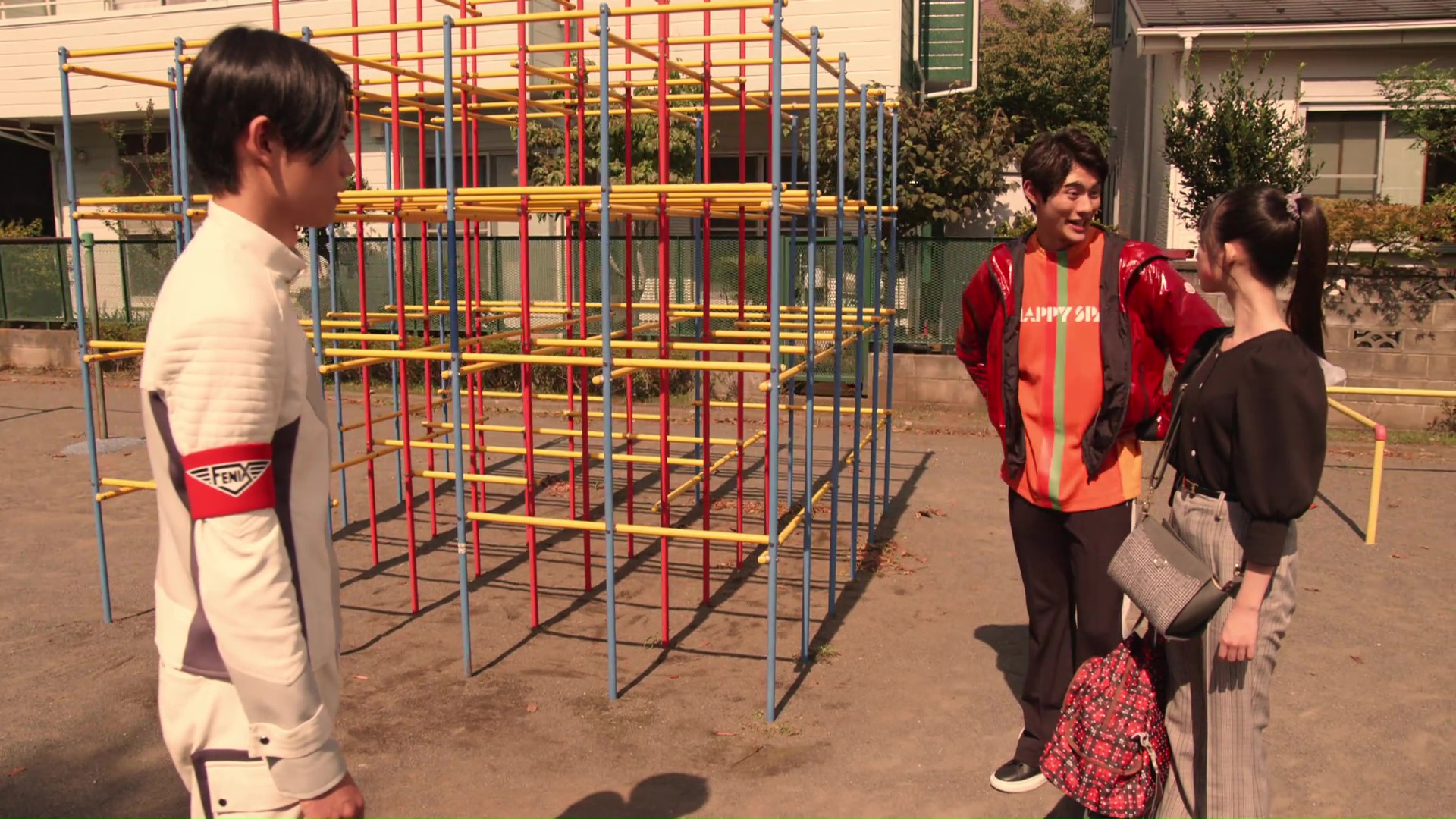 Sakura asks her brothers if she can join the fight. Ikki says Daiji already asked Fenix to help with Ryou’s treatment. Sakura apologizes to Daichi and he apologizes for being so harsh. She says he can make it up to her with ten pudding cups, but he says he’ll only get her one.

As they leave, Vice decides to name Sakura’s demon Lovekov since that’s all she seems to be able to say. He says that since he is her sempai, she should be careful not to show him up. However, Vice can’t help but think Lovekov is very cute and that could make her more popular than him. Lovekov jokingly calls him a loser.

Sakura takes one look back at the playground with a smile. 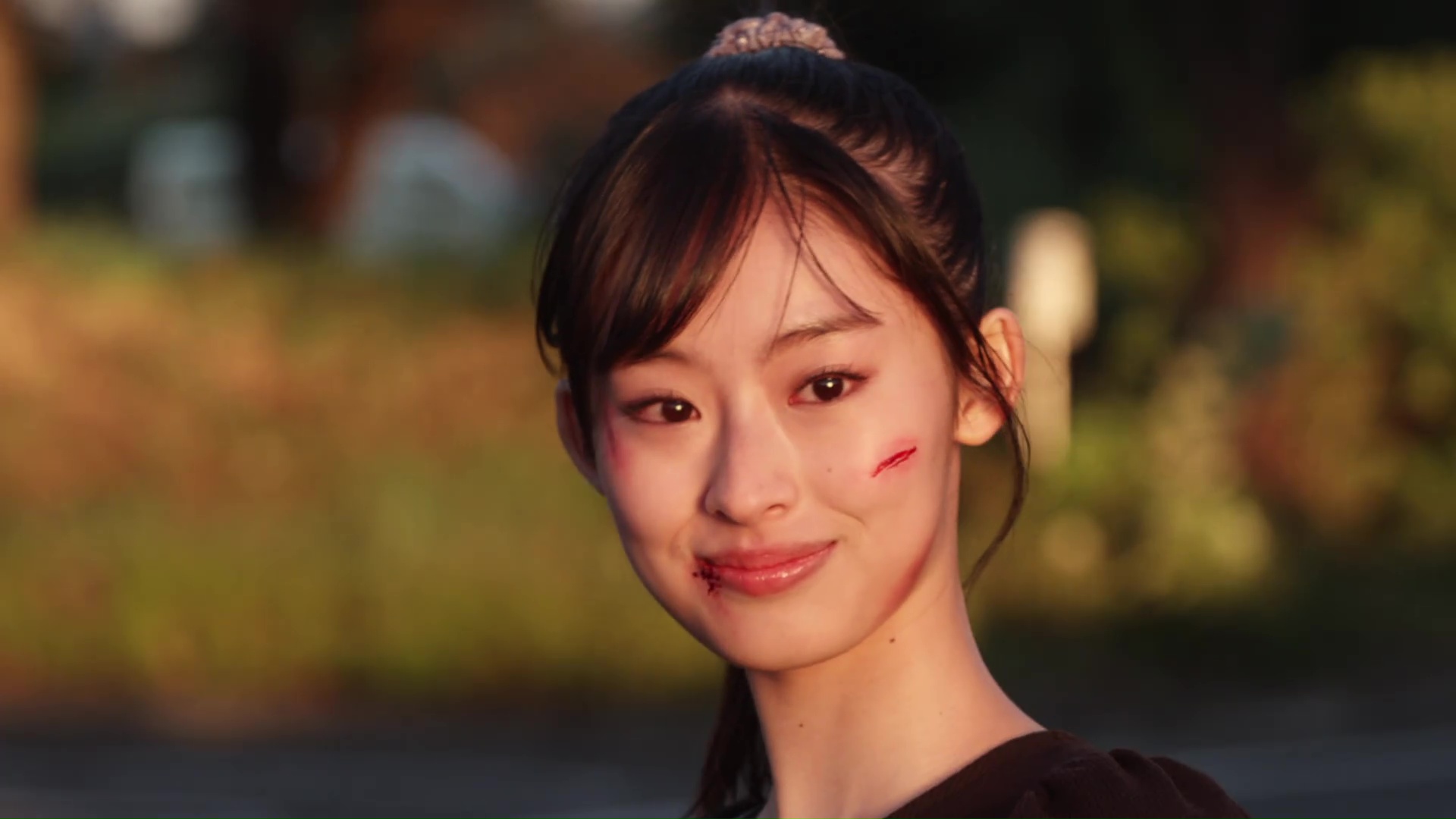 A good debut for Kamen Rider Jeanne. Again, I’m so happy to have not been spoiled by the name nor the design. So that definitely helped to make the episode more exciting for me.

The sibling energy that was central to the episode was awesome. Of course big brothers will want to protect their baby sister. It’s a familiar sibling dynamic. And the show used it very well here. I especially loved the scene between Ikki and Sakura. Short, but impactful. Ikki’s scene with his parents concerned about their children too was welcome.

But of course, it’s all about Sakura being able to overcome her struggles and any hurdles on her own. (With some help of course.) I was kinda worried that it would be Aguilera’s words that get things clicking for her. I honestly would not have liked that. Ultimately, I will take that it was her brothers that nudged her in the right direction. And not necessarily anything they said in the present. But more so that innocent childhood memory from the playground.

Though I wish they explored things a bit more for Sakura’s character, I think it developed okay. But it seems like nothing came out of Julio’s lurking about in the dojo. That part is kinda disappointing.

Being able to introduce Lovekov and the idea of nicer, less-antagonistic demons worked very well. There are some interesting story possibilities with that.

It fit well with Sakura’s struggle over accepting her weakness. Weakness can be strength indeed. Being able to acknowledge and overcome weakness can definitely be a strength. And that being Sakura’s inner demon is almost a literal depiction of what “inner demons” can traditionally mean.

Also, I hope this is the start of a Sakura-Amahiko rivalry. That would be a refreshing direction for them to go in and gives Sakura her own story as well. Especially if the show continues the Sakura-Aguilera plot thread too.

Elsewhere in the episode, the moment with Hiromi and Daiji was funny. Bullying is not funny of course, but the random way they inserted it here and Daiji being taken aback by the sudden confession by Hiromi was amusing. I very much like seeing a character like Hiromi also get fleshed out a bit. Even if it was a bit of a throwaway scene played for chuckles.

Overall, a great debut episode for Jeanne. Good character moments for Sakura and the rest of the family. And some very nice action as well, especially for Sakura’s first henshined battles.