The teams finally leave Queensland and head to the Northern Territory. But at Darwin Airport, Beau has a surprise for the teams. He gathers them together to shock them with a Stowaway Team, footy mates MJ & Chelsea. 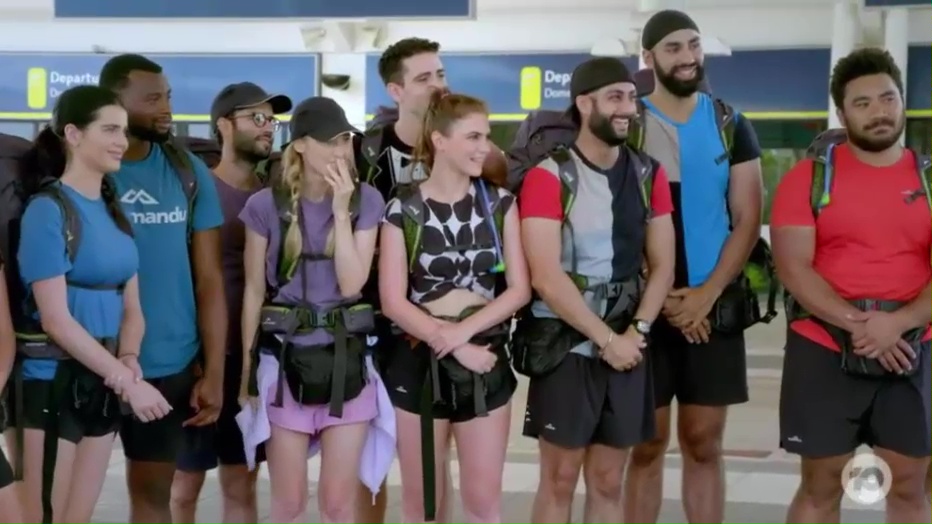 To allow MJ & Chelsea to earn their spot in the Race, Beau gives the other teams a whopping five-minute head start to the first clue on the nearby cars. Teams must drive themselves to Crocodylus Park where they must transfer a saltwater crocodile, measure it and then release it into the lagoon.

Dwes & Katherine arrive at the park in first with Jaskirat & Anurag right behind them. With Sefa & Jessica getting lost, they arrive at the crocodile park in last even behind MJ & Chelsea who had to wait out their excruciating five-minute penalty. 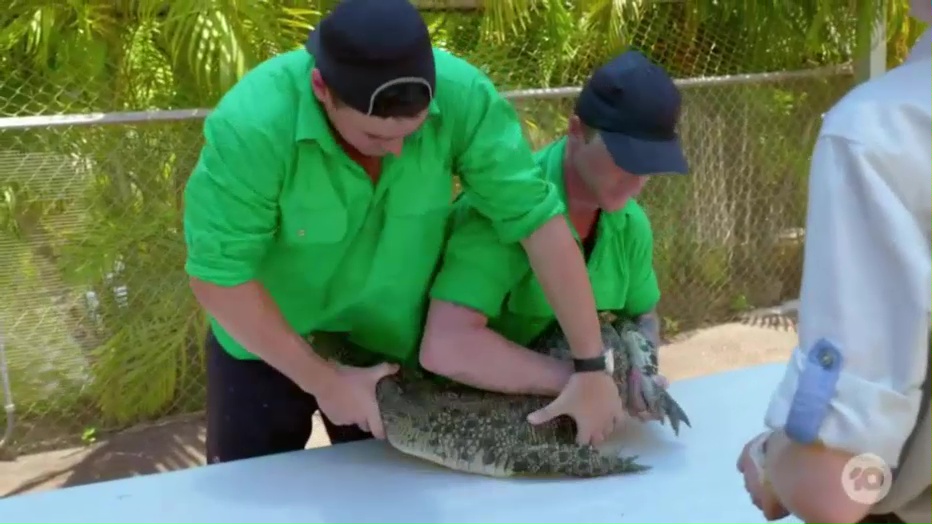 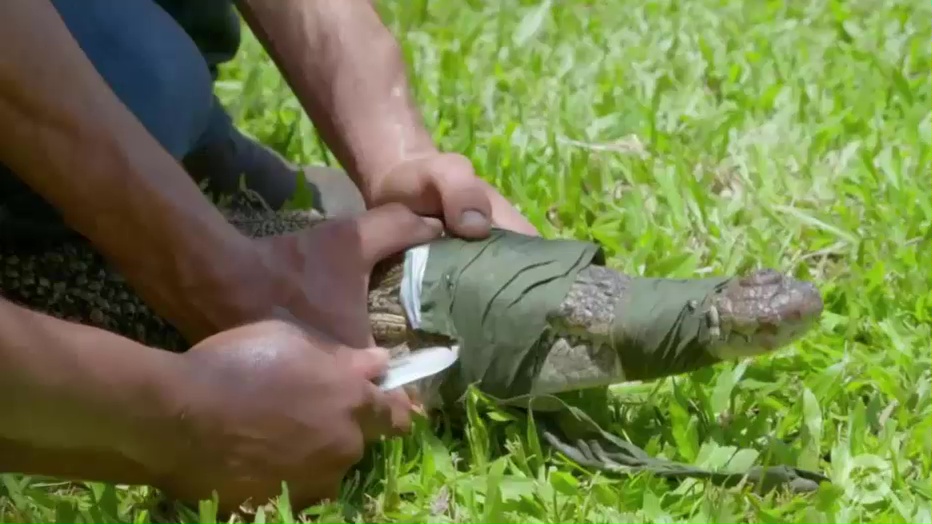 The cousins and the Super Sikhs maintain their leads and open the next clue revealing the Detour: Treat It or Eat It. In Treat It, teams must make their way to Royal Flying Doctors hangar. Here, teams must identify three wounds (a burn, a head trauma and a snake bite). They will then treat each wound on the patient according to the corresponding treatments in a medical manual to receive the next clue. In Eat It, teams must head to Laksa House and follow Amye Un’s world famous recipe to make some of Darwin’s signature dish in order to receive the next clue.

The cousins and the Super Sikhs both choose the laksa. They both fail their first attempts. Meanwhile, Chris & Aleisha are first at the treatments followed by Brendon & Jackson, Holly & Dolor and MJ & Chelsea. Sefa & Jessica are close behind.

At Laksa House, Dwes & Katherine tweak their recipe and Auntie Amye gives them the thumbs up. They open the next clue revealing the Road Block: Who’s the sharpest? For this Road Block, teams head to a famous billabong, swim to a pontoon in the middle of the water to grab a knife and then swim back and use it to hit a target. 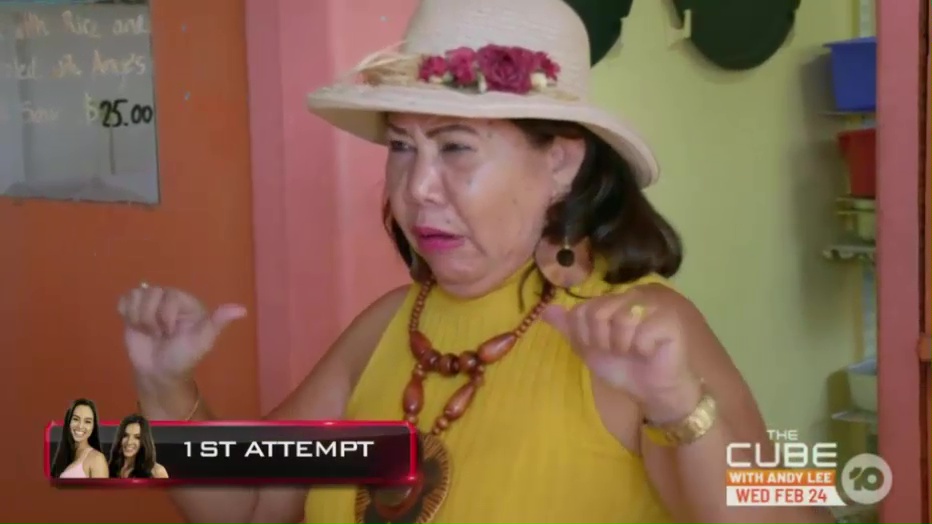 Chris & Aleisha are first to finish the treatments. Over at Laksa House, the Super Sikhs have already left before Skye-Blue & Jake and Ashleigh & Amanda arrive.

Ashleigh & Amanda are struggling with the laksa while Jordan & Violeta, having gotten lost, just start the treatments when the only remaining team Sefa & Jessica leave.

Over at the billabong, Dwes jumps into the water and must keep an eye out of the crocs lurking about. When he gets back on land, Dwes struggles with hitting the target with the knife as Jaskirat arrives and gets started with the Road Block. Dwes gets it on his 20th attempt.

Dwes & Katherine can now make their way to Hidden Valley Raceway. They will jump in a car and make sure to keep water in a fishbowl above the line while drifting around the track. If the water falls below the line, they must start over again.

Meanwhile, MJ & Chelsea have arrived 3rd and MJ gets started. Chris & Aleisha arrive next and Chris chooses to do the Road Block. MJ hits the target on her 8th attempt.

The Cousins and the Super Sikhs arrive at the racetrack at the same time. But Jaskirat & Anurag manage to hop into the first cars.

Back at the Road Block, Jessica is struggling in the water. Skye-Blue decides to help her by getting a knife for her. Jessica is grateful to Skye-Blue for being nice unlike “some other witch” Ashleigh who was “flaunting” their knife. Jordan & Violeta, who arrived last, are able to leave before Skye-Blue & Jake and Sefa & Jessica.

Meanwhile, Jaskirat & Anurag and Dwes & Katherine finish neck and neck. They can now make their way to the “Pit Stop above the pit stop” here at Hidden Valley.

It is the Super Sikhs who check in as Team #1 and win a trip to Darwin. The Cousins settle for 2nd place.

At the Road Block, Skye-Blue hits the target on her 78th attempt. She and Jake leave Jessica struggling at the target. She finally hits it on her 81st attempt. 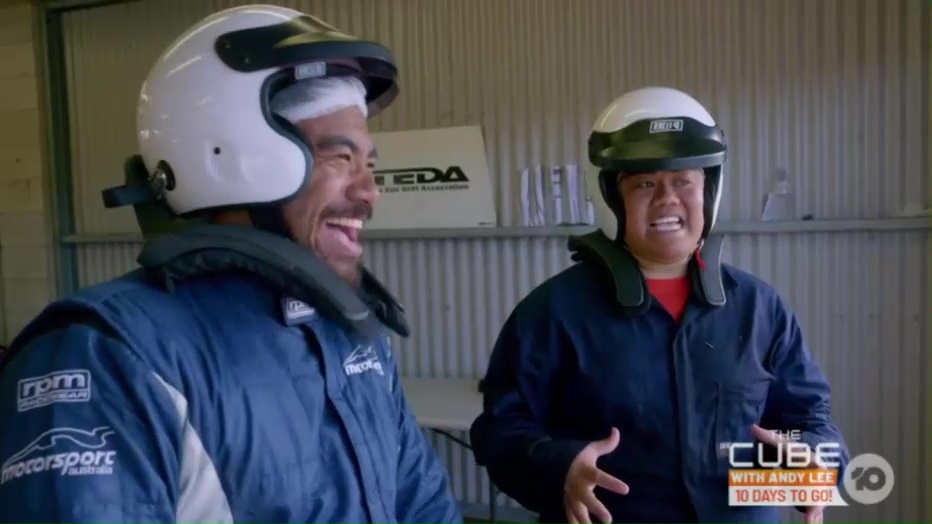 Ashleigh & Amanda check in as Team #6 followed by Skye-Blue & Jake and Holly & Dolor in 7th and 8th, respectively.

Jordan & Violeta take 9th. And that means Sefa & Jessica are last and sadly eliminated from the Race.

An emotional farewell for The Besties, Sefa and Jess ❤️ You did yourselves proud by overcoming your fears…what a great run 👏 #AmazingRaceAU pic.twitter.com/YMDMZr4CO4

So what in the TAR China is this? lol I think at this point, I’m not really surprised by any random twist TARAu5 throws into the season. But at the same time, I never expected them to trot out this doozy from TAR China. I wasn’t a fan of it even though it randomly brought in two popular Korean celebrities for a Leg at the end of the Race (!) lol. And I’m not really sure I like it here either.

Again, I have to be consistent. I wasn’t a fan of even bringing back Dwes & Katherine nor am I a fan of First Class teams skipping Legs. So I can’t be happy about a team popping up on the 7th(!) Leg of the Race.

It really is such a Survivor or Big Brother kind of twist. Nothing against MJ & Chelsea who seem like a fun, competitive team. But the twist itself is just so unnecessary. And obviously feels so unfair to the eliminated teams. I honestly hope they don’t make it to the Final Leg. I think that would be so crazy. Having that asterisk by a possible winner would not be a good thing.

I had to laugh at Beau saying MJ & Chelsea had to earn their spot on the Race by having to serve a *gasp* five-minute penalty. Whew! What an impossible amount of time for them to overcome! Totally comparable to the Mums not being able to speak to each other or even Jordan & Violeta wearing goggles all Leg. So difficult.

Speaking of First Class teams, LOLOL at Ashleigh & Amanda not having to draw lots to determine departure position on this Leg. Not only that, ALL teams departed at the same time at Darwin Airport. Lol Uh, okay. All of a sudden the Race disregards the placements from the last Leg.

Anyway, this Leg was otherwise quite normal. The most normal of the season so far (minus the Stowaways). The crocodile task was a good Active Route Info task to start the Leg with.

The Detour was also very good. Perhaps the best Detour of the season so far. Both sides of the Detour were actually good, interesting tasks. Auntie Amye was awesome and would make the Detour great just by herself. But both tasks had their unique challenges and it was placed in a good spot on this Leg.

The Road Block was also very creative. A good solo task to do. Straightforward, but also challenging.

Speaking of TAR China (which is the franchise I first saw this task in), the fishbowl task was fun. Though I think TAR China’s monster trucks was a little more amusing to watch.

Not too much of a fan of having a processional task like this right at the Pit Stop location. But whatever. It’s TARAu5 after all.

Overall, maybe the strongest Leg and episode of the season. As long as we ignore the new twist.

Sefa & Jessica are such a great team to root for. So I am so sad they have been eliminated. I don’t think there’s any other team I can root for as much as I would have for Sefa & Jessica (or Jobelle & Rani). They Raced well, they were fun. A great combo for a TAR team you just enjoy watching.

Ashleigh & Amanda definitely struggled a bit at the Detour. Not the kind of performance that should come after their great momentum. I would have loved to have seen a Sefa & Jessica/Ashleigh & Amanda rivalry though. lol

Dwes & Katherine were the most fun to watch this Leg since the first Leg. They obviously did very well and handled the lead awesomely. This was their Leg to win had it not been for Tom & Tyler, I mean Jaskirat & Anurag.

Speaking of, Jaskirat & Anurag are definitely back to being the Tom & Tyler of this season. Though obviously, they hope to have a better result than the footy bros. The Super Sikhs are just able get though tasks and get ahead. Almost effortlessly. If I were the other teams, they would be a U-Turn target. Because I think that might be the only way to slow them down. Otherwise, I honestly think it’s their Race to lose.

Holly & Dolor were much more quiet this Leg. Though Dolor definitely had some amusing moments at the crocs and at the racetrack. I don’t think I saw much of Brendon & Jackson this episode. They were mostly in the middle of the pack, so they weren’t a focus at any point during the ep.

Props to Skye-Blue & Jake for helping Jessica. I probably would’ve said it was a bad decision to grab a knife for another team. But since it was for a team I like, it’s cool. lol

I feel like Chris & Aleisha have the potential to be a more interesting team. They’ve shown moments here and there, but I would love to see more fun moments from them. Jordan & Violeta are hanging on so far.

And MJ & Chelsea seem like a great team. It would’ve been nice to have seen them from the beginning instead of just popping up in Leg 7. I don’t dislike them at all. I just dislike the twist.

Jessica: “Those legs can squash heads.”

Holly: “Sorry I got you really wet.”

Recap: The Amazing Race Australia 5, Episode 11 – “I’d rather be a really good human than a really rich one.”

Recap: The Amazing Race Australia 5, Episode 10 – “Get back on the train!”