Recap: Kamen Rider Saber, Chapter 6: Like the Wind, He Arrives. 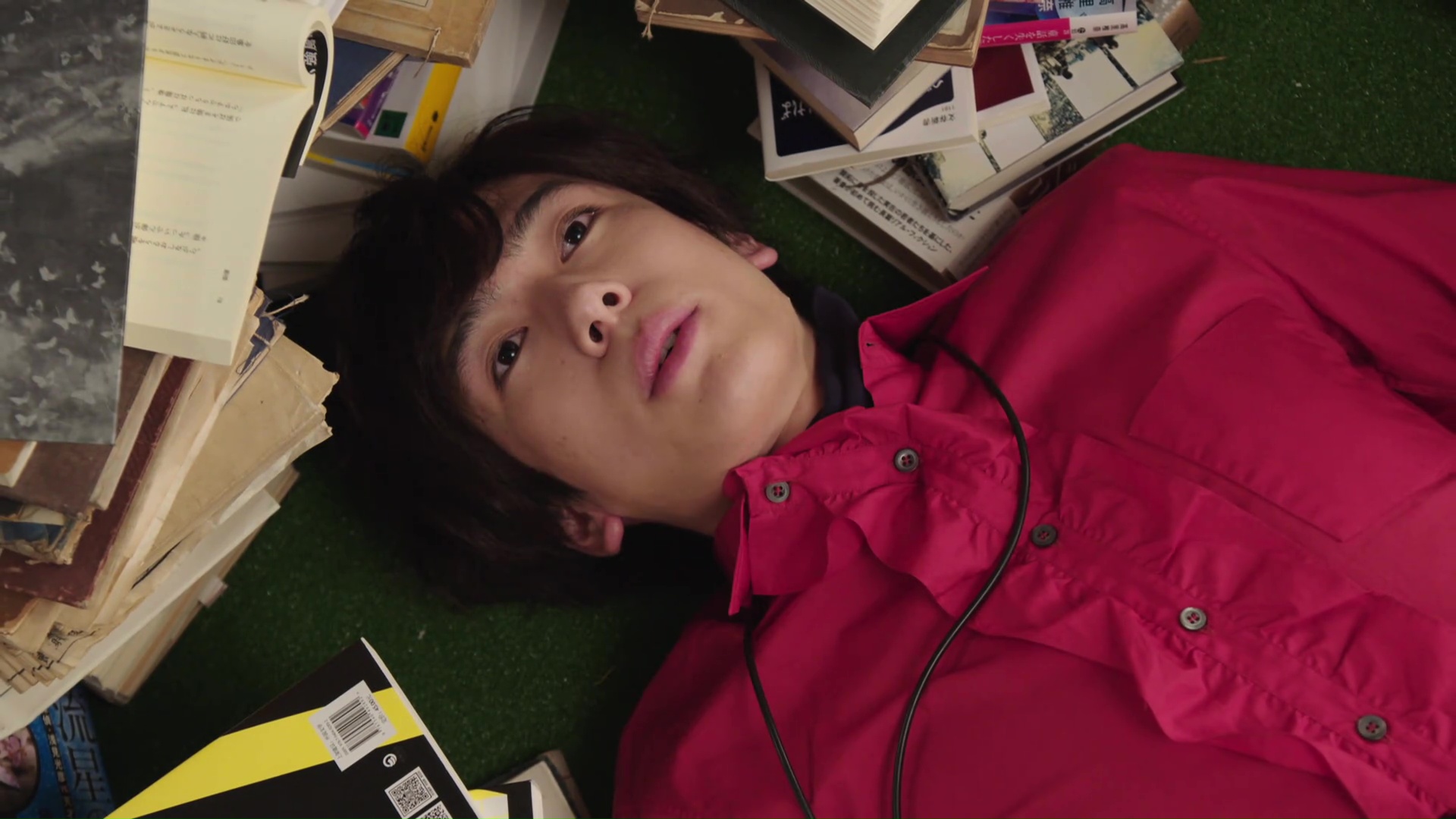 Touma thinks about how the SoL and the Megid are all fighting over books when they’re supposed to bring people happiness. He heads to the North Pole and asks Kento to tell him more about Wonder Ride Books.

They are interrupted when Akamichi Ren walks in from training in the Liberation. Kento introduces Touma as the new Saber. But Ren calls him a scrub.

Sophia comes in to say that Zooous has appeared. She adds that they aim to invade the Wonder World, the source of power for all Wonder Ride books. She tells Kento to help Rintaro who is already looking for them.

Tetsuo also pops up and takes Ren’s sword, saying it needs to rest.

Touma asks Sophia if he can read the books here. She says of course. Books can provide answers to anyone who seeks the knowledge and inspiration contained in them.

Sophia says Touma can ask Slash if he has any more questions. Touma isn’t sure who Slash is, but appreciates the help.

Touma takes some books back to his shop to read. Ren pops up and Touma attempts to ask him about Wonder Ride Books. But Ren says he’s only concerned with strength.

Tetsuo walks in and says Wonder Ride Books come from the Book of World Creation and contain great power. They have the power to save the world, but can be very dangerous when in the wrong hands. The Megid create Alter Books which create new and dangerous worlds.

Ren wants to know how Kento is so strong. He brushes off Touma saying that reading books is just as important. But Ren says nothing else matters in the battle for justice than strength. Touma says trust is about what’s in the heart.

Tetsuo says both are important.

Ren says he doesn’t understand Touma and challenges him to a fight for the Kobuta 3 Kyoudai Book. They get Tetsuo to referee. Whoever hits the other with their newspaper sword first wins.

But just as they begin, Touma’s phone rings. It’s Kento-kun, which immediately distracts Ren and allows Touma to tap him and claim victory. 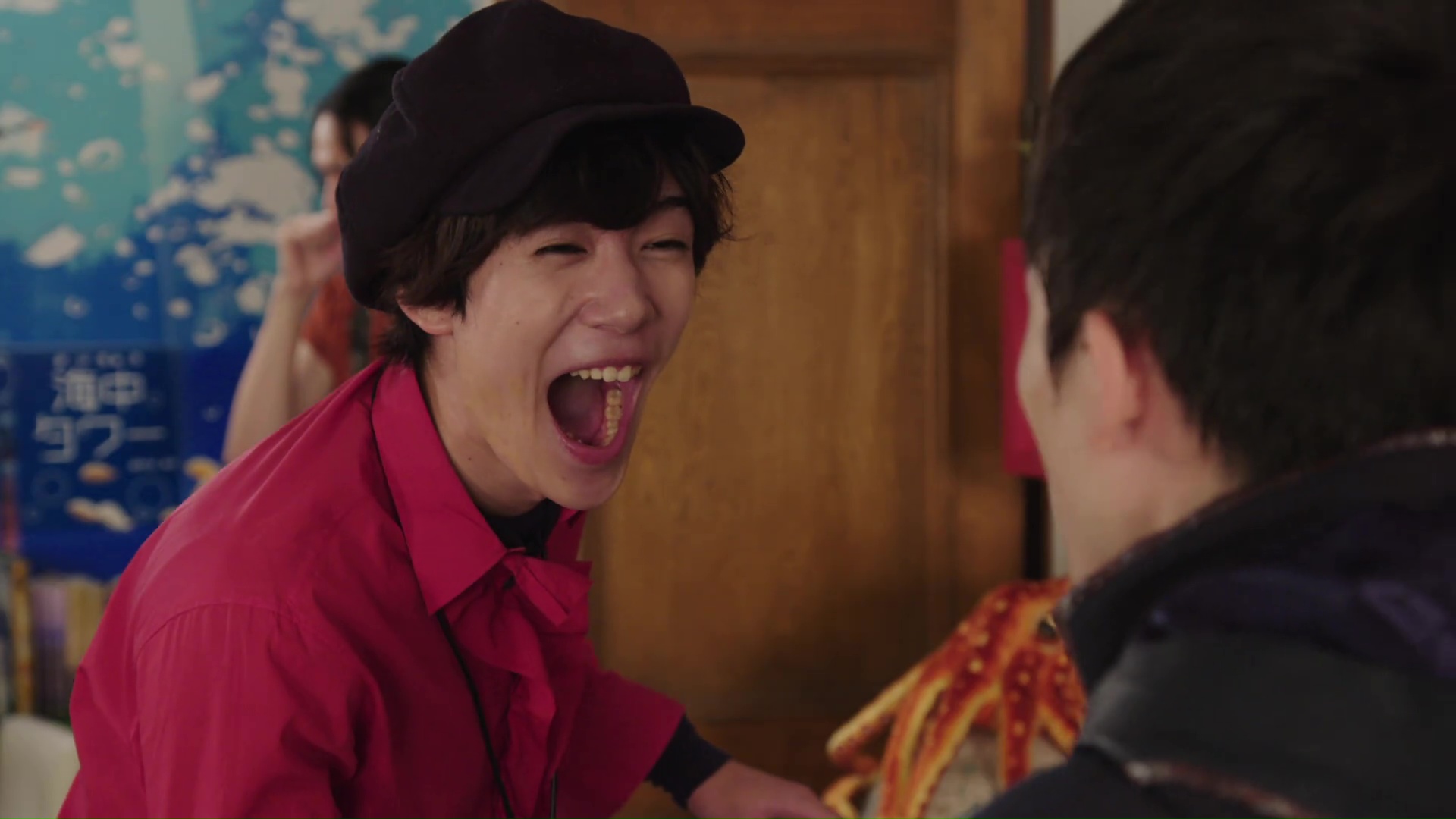 Ren doth protest too much and says Touma’s tap doesn’t count. But Touma takes the Book and Kento’s call.

Kento is struggling against a female Piranha Megid. Touma hurries over. But he has to face Desast. Touma triple book henshins with the new Three Little Pigs Book and takes on Desast.

Touma somehow gets Piranha Megid to play the role of the Big Bad Wolf in the Three Little Pigs which allows him to finish her off for good.

Just then, Storious appears. Touma approaches him thinking he’s just an innocent bystander. But Storious warns Touma not to take the bait all the time because it may be poisonous.

Storious opens his Book, which somehow removes the Storm Eagle Book from the Driver and locks the Rekka in, preventing Touma from pulling it out. Desast picks the Book up and Storious says Touma will need the “power of a lost place” for him to be able to draw his sword again.

Up in the North Pole, Ren taunts Touma for losing Ogami-san’s Book. Tetsuo finds that a seal has been placed on the Rekka. And the only way to break it may be to travel to Avalon.

Tetsuo explains that Avalon is a lost place that holds a dormant power that they could harness. But no one knows where it is.

Touma asks Ren to go with Kento to save everyone. He hands Ren the Three Little Pigs Book. Ren proposes another challenge, believing he can defeat the Megid before Touma finds Avalon.

Touma agrees to it and Ren follows Kento out. 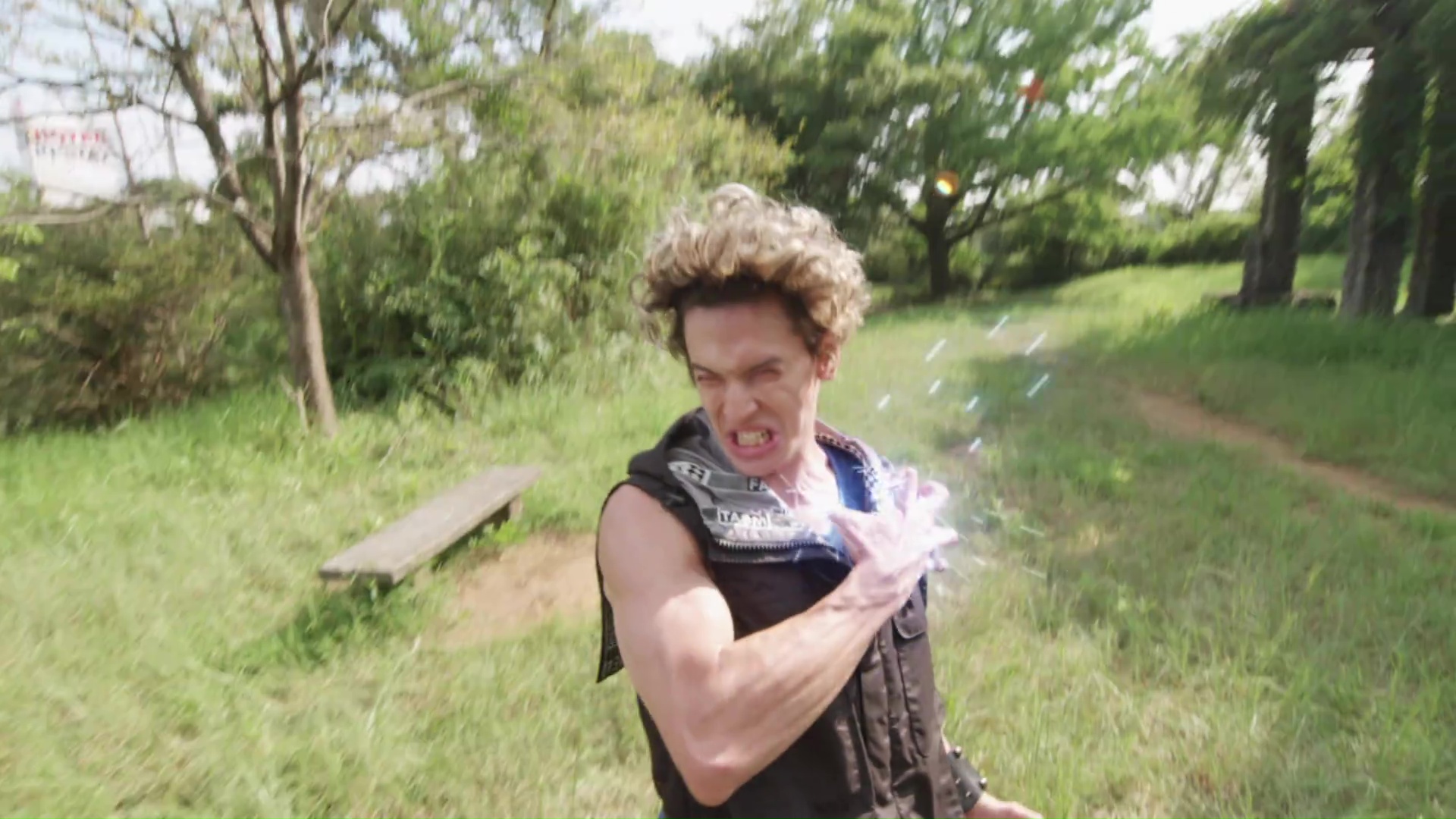 Elsewhere, Zooous is about to hop into a Book when Rintaro and Mei find him.

Zooous transforms and Rintaro henshins. Zooous discovers Rintaro is a water swordsman and remembers when he fought one long ago. Zooous says that man was an upstanding guy with a backbone. But it’s too bad that he killed him.

Rintaro cannot believe it. That was his master.

Meanwhile, Kento and Ren find the Megid. Ren proclaims he will show Touma that his strength and justice will win. Kento says Ren does not need to compete with Touma. But Ren does not listen.

Ren henshins as does Kento and they take on the Megid.

Back at the North Pole, Tetsuo tells Touma that Avalon is the place where a once uncontrollable power was sealed.

After looking through lots of books, Touma asks Tetsuo if there are any forbidden books which might hold the key. They rush up the stairs to the shelves. And thanks to Tetsuo pointing them out, Touma touches three books which releases a forbidden book from above.

Tetsuo says Touma can’t read it. But Touma believes it contains the answers they need. He reads about 13 stories being connected by a sword and he gets an idea. 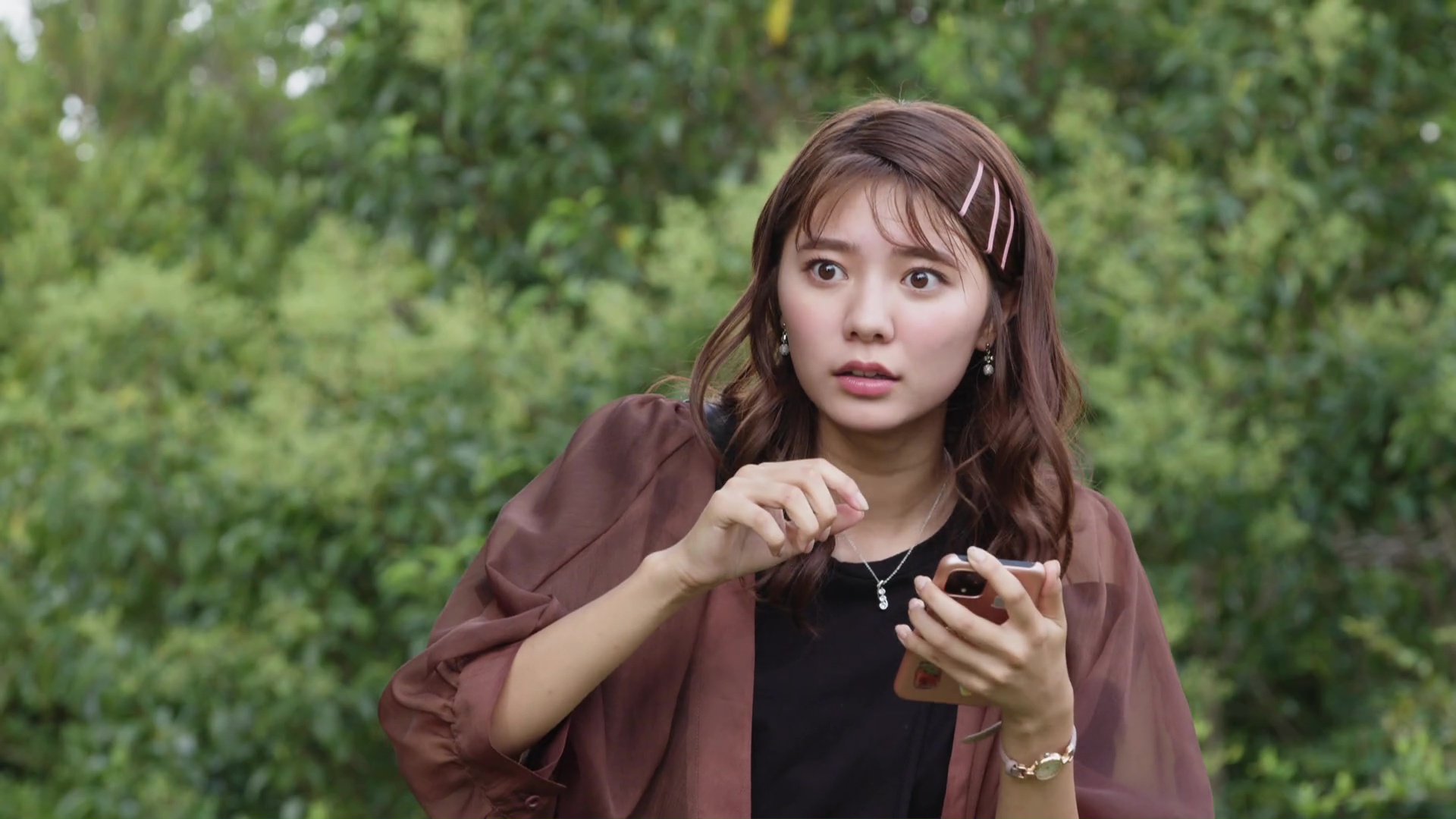 Mei cheers Rintaro on and says she will call for backup. But Rintaro tells her not to as he must be the one to strike Zooous down.

As Desast takes Ren into the video game world and Kento takes on the Megid, Touma outlines connections over a page showing different symbols based on what he has read. A sneeze from Tetsuo seems to give Touma the final piece he needs.

Storious hands Calibur the Book that should open the time rift that gets them to Avalon. But Storious asks what Calibur will do after he obtains the power.

Zooous grows bored with Rintaro and says he’s not even worth killing. He picks up Rintaro’s sword and hands it to him, mocking him by saying he can go cry to mommy now.

Zooous turns to leave. Rintaro tries to chase after him, but he can’t. Mei runs over to Rintaro after he dehenshins.

Rintaro cries out in pain.

Tetsuo says Touma must make it to Avalon. Touma thanks Tetsuo and realizes he is the “Slash” that Sophia mentioned earlier. Tetsuo says Sophia is the only one that calls him that now.

Later, Rintaro storms into the North Pole HQ and takes the Tenkuu no Pegasus Book.

“I refuse to give up on myself,” Rintaro says before he walks through the doors.

Well that was a hectic episode, for sure. But in the midst of everything that was happening, I gravitated most toward Rintaro and Mei’s continuing side-adventure and getting to meet Tetsuo a little more. Everything else felt disconnected or just too crazy to unpack at the moment.

As is usually the case for me, I enjoy our title hero a lot more when they calm it down and get serious. I mean, I appreciate their comedic shenanigans and all. Though I guess that actually helps. That is, their loud, physical comedy bits are always a contrast to the moments when they get down to business. Like in this episode, Touma being focused on learning more about this crazy book world and then having to search for a way to unlock his sword/travel to Avalon. That was very interesting and some nice character moments for him. But not necessarily interesting in the bigger picture, if that makes sense.

Touma’s reading and research also allowed a longer introduction to Tetsuo who might just have shot to the top of my favorite characters list for the season. (Right alongside Rintaro and Mei, I think.) It was great to see the bashful, shy guy we were introduced to be revealed as someone who is very thoughtful. He’s obviously a tech/weapons wiz and thus, knowledgeable with all sorts of things. So it was great to see that laid out in a way that let us and Touma get to know him much more.

I think Ren’s chaotic debut also helped make Tetsuo’s part in the episode that much more engaging since it was such a calmer contrast.

With Ren, again, I know it’s not like we’re getting more Riders than the usual season. But somehow the way Saber is trotting them out just feels overwhelming. Especially when they should be laying the foundation for the season a little better, having all these Riders in addition to the still mysterious Megid trio + Calibur and now Desast; it’s all a lot to keep track of.

Ren being such a big personality right out of the gate also didn’t really help. His first impression was basically telling Touma to keep his hands off Kento. Like a “Back off, he’s mine” sort of vibe in the guise of being some young, upstart hotshot rookie. It really felt mildly chaotic on its own. Even more so paired with everything else in the episode.

What to say about the Megid when I have no clue what they’re talking about. Therefore, not knowing enough about them or what they’re doing to even care.

Which brings us to Rintaro and Mei. Setting aside the fact that Mei had time to get her hair done since Zooous’ attack last week, they were a very welcome sight towards the end of the episode. I was honestly waiting for them the entire time. So I cheered as soon as they popped up. Their fun chemistry is great. Like this fun odd couple duo who go on fantastical adventures. (And as a hopeless romantic, also with the possibility that they fall for each other in the future. lol)

But as soon as they popped up, they immediately grabbed my attention. Even more so when we get the big reveal about what Zooous did to Rintaro’s master. (I was totally expecting the former Blades to be his father of course lol) It will be exciting to see some Rintaro Rage.

Overall, a very full and pretty hectic episode. I’m still trying to get a feel for the season even though I do like a lot of different parts of it so far.

Recap: The Amazing Race 32, Episode 3 – “I didn’t realize that drama was happening.”