Recap: The Amazing Race 3, Episode 7 – “I’m Supposed To Be Indebted To Her For The Rest Of The Race?!”

Recap: The Amazing Race 3, Episode 7 – “I’m Supposed To Be Indebted To Her For The Rest Of The Race?!”

With only a dollar for this Leg, teams must now fly to Munich, Germany and find friend Kasperle in the Friedensengel.

Teri & Ian hope to maintain their almost two-hour lead on the other teams by leaving Morocco as soon as possible. They are able to make the 6:05am flight to Munich via Zurich.

Flo & Zach, Ken & Gerard, Derek & Drew and John Vito & Jill, who leave within minutes of each other in the 5am hour have to fly to Casablanca in order to find more flights.

Andre & Damon, departing the Pit Stop at 7:04am, arrive at the airport and find there are no more flights out of Marrakech. Andre wants them to leave immediately for Casablanca, but Damon insists on asking a few more airlines. Instead of going to the train station, their taxi driver offers to drive them to Casablanca for 1000 dirham.

Already in Casablanca, the other teams find all flights to Europe are overbooked and they scramble. It’s the original Brotherhood vs Flo & Zach/John Vito & Jill. Flo and Drew talk about the two-on-two competition in a very flirtatious way.

Ken & Gerard, Derek & Drew and John Vito & Jill are able to score standby tickets on an 11:45am Air France flight via Paris. Flo & Zach have to settle on a 3pm Lufthansa flight via Frankfurt. 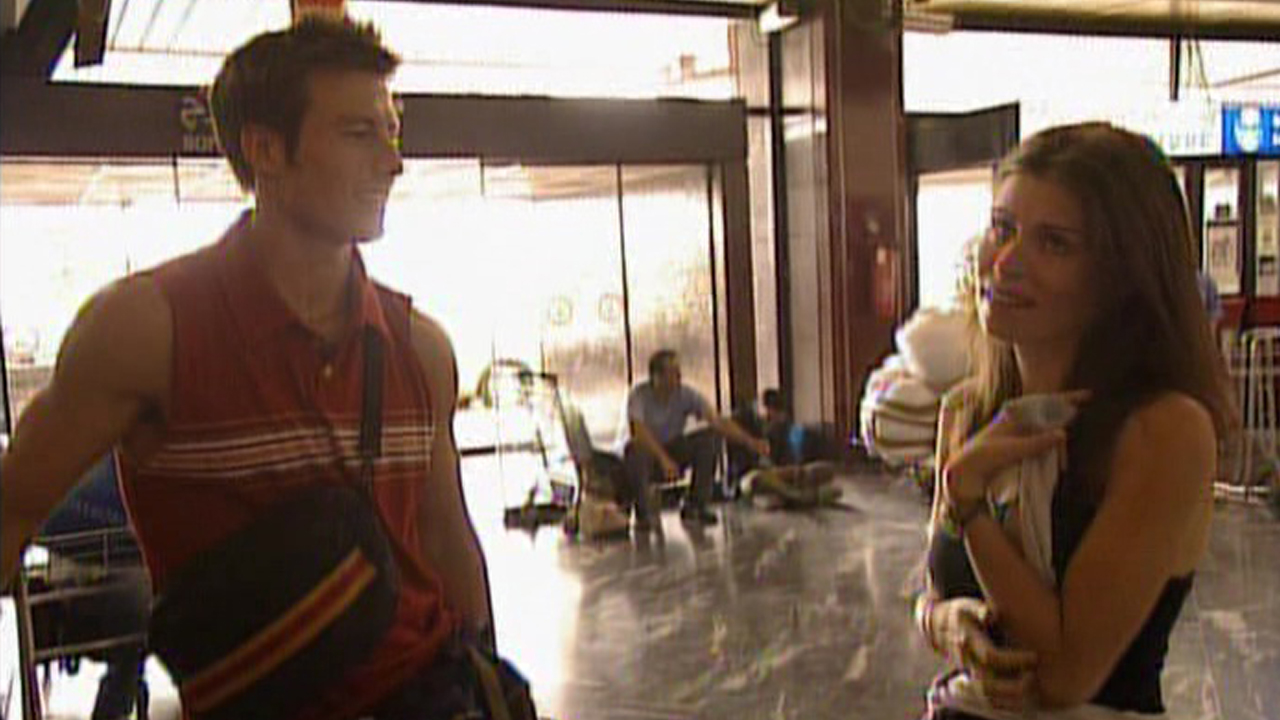 Meanwhile, Teri & Ian have just arrived in Munich and they make their way to the park where Kasperle hands them their next clue. And that clue tells them they won’t be in Munich for long as they must now take a train to Kasperle’s original hometown, Innsbruck, Austria.

In Paris, Andre & Damon have to make a tight connection. On the bus to the other terminal, they meet a nice Lufthansa employee who offers to help them. But she is unable to get them on the flight as it has already been closed.

As the other teams are in Munich waiting for the train to Innsbruck, Teri & Ian are already there. They make their way to the Annasaule where they find the next clue revealing the Detour: Sled or Skate.

In Sled, teams will ride along with a team on a bobsled track. In Skate, teams must join a team to perform a speed skating relay.

But! There are Hours of Operation and both locations will open at 8am, completely erasing Teri & Ian’s lead. They decide on the bobsled and make their way to the track to secure their spot as the first team to run.

Derek & Drew spot the numbers board in the dark and try to whisper to Ken & Gerard to grab the next number before John Vito & Jill. The three teams reunite with Teri & Ian to sleep outside for the night.d

Flo & Zach arrive in Munich and debate whether to go for the Fast Forward. Flo says her only concern is the whereabouts of Andre & Damon who they don’t know are stranded in Paris until next morning.

They decide to find the Eisbach and then search for someplace to sleep in for the night. Zach wants them to save money, so they find a cheap motel, much to Flo’s annoyance.

At 7am, Flo & Zach must find a surfer riding a standing wave in the Eisbach River to ask for the clue. And that clue directs them to drive to the Pit Stop in Fussen, Germany.

Over at the bobsled track, Teri & Ian speed down first followed by Derek & Drew. The next clue points them to the Gondola Nordkette which they must take to the Seegrube Station for their next clue.

Teri & Ian quickly jump into their taxi which they had asked last night to return for them at 8:30am. Derek & Drew hop into a cab as well. But Ken & Gerard and John Vito & Jill have to wait for theirs, even though they also asked for three cabs to show up in the morning.

Teri & Ian and Derek & Drew arrive at the next Route Marker and open the next clue revealing the Road Block. For this Road Block, teams must descend from the gondola on a rescue cable to receive the next clue.

Teri, Drew, Jill and Gerard decide to do the Road Block. Drew thinks the cable looked cheap and flimsy.

While waiting for the gondola back down, Derek has misplaced his clue. Teri points out that he left it on the counter and he thanks her. On the gondola, the twins are looking in their guide book for the Pit Stop. Ian approaches them and asks if they’ve found anything yet. Derek says they shouldn’t give out information for free.

Teri & Ian can’t believe they’re saying that after Teri pointed out where their clue was. Derek does not think he should be indebted to Teri for the rest of the Race.

After the Road Block, teams can make their way to the Pit Stop on the meadow below Neuschwanstein Castle in Fussen, Germany by driving a new Mercedes.

Flo & Zach arrive at the Pit Stop and claim their win as well as a pair of Kodak EasyShare Digital Cameras.

Meanwhile, Andre & Damon are on the train and fall asleep. They completely miss the Innsbruck station and ride right past.

The other teams hop into their Mercedes and drive on to the Pit Stop. It’s chaos as no team knows where they’re supposed to go. The Wonder Twins, on their own, explode at each other while Ken & Gerard’s tire blows up too. The Oh Brothers decide to drive on with a flat tire for a while until they have to go get it fixed.

Andre & Damon finally arrive in Innsbruck and are told to go directly to the Pit Stop where they are eliminated. They decide to return the $1 to Phil.

Recap: The #AmazingRace 3, Episode 7 – "I'm Supposed To Be Indebted To Her For The Rest Of The Race?!" – https://t.co/ot1W76efUA pic.twitter.com/yV4WUULFSS

So half of this episode was about the teams getting out Morocco. And I am again reminded of how crazy logistics must have been back then. The Leg was really not well-designed. And look no further than seeing the first place team a day apart from the last place team. That’s crazy.

Obviously, TAR was VERY different back then. And this type of Leg design and airport maneuvering was very much the standard at the time. But looking at it from a 2020 perspective, you can see why the show made the changes they’ve made. That’s not to say the barebones Legs of the most recent seasons are better.

But looking back, it’s hard not to wonder how things could’ve been different with a tighter Race.

Anyway, Andre & Damon were done before even leaving Morocco. That obviously already removes any excitement from who might be going home. But then again, maybe that’s why they devoted such a huge chunk of the episode to the airport drama.

Teri & Ian encountered two equalizers just to have the other teams catch up to them. (The train and then the Hours of Operation.) I love Teri & Ian and loved seeing them so far ahead. But it’s just so crazy to think about the logistics to have made than happen.

The Fast Forward was very lame. Like, have the teams actually do the surfing. Not just find the surfer and ask him for it. Of course, when you have a Fast Forward every Leg, they’re going to do very simple things like this instead of stage a whole separate task that may go unused.

The Detour was okay. Typical early TAR-type of task. But definitely fizzled out since only four teams had to do it.

The Road Block was better, though still very simple and straightforward. Back then though, things like that were so extreme and uncommon on TV that it was so exciting.

Overall, not the most exciting Leg. And not even many fun moments compared to other episodes.

Phil has kept talking about Teri & Ian being in danger every week at the start of each episode. I feel like maybe it was to lead up to this episode. They were so far ahead of the other teams, they probably could’ve finished the Leg before the others even arrived. So crazy! But from now on, Teri & Ian would be able to prove themselves without a Fast Forward-induced lead.

John Vito & Jill stepped out on their own a little bit this Leg. After working with Flo & Zach in Morocco, they had to go on their own. They did work a little with the Brotherhood. But it was good to see them with different teams for a change.

Ken & Gerard get some points deducted after this episode for their unfunny crack about Teri & Ian being stranded in Casablanca and being grumpy ugly Americans. This is of course happening at the same time Teri & Ian are hours ahead of them already in Innsbruck. Even more wisecracks later on. It reminds me that they were kind of cocky at points during the Race. And if they were a team on today’s TAR, they might not be as likable to me as they were back then, tbh. Yikes! But their flat tire situation is the type of Ken & Gerard I enjoy the most.

Flo & Zach‘s dysfunction continues to simmer. I think we’re also seeing Flo starting to tire out a little bit. But Flo’s move at the airport speaking to the ticket agent in Spanish(?) to not sell tickets to Andre & Damon was a great move. I do wonder if her flirting with Drew also contributes to how she gets crazy towards the end of the Race.

My favorite moments of Derek & Drew are when they’re upset with each other. And this episode had one of my favorite moments from them. The “It says Fussen on the fucking map!” is a quote I always remember for some reason and it was a funny moment.

Andre & Damon have really been running on fumes by this point and it’s a good spot for them to go. The remaining teams have all showed they are contenders, so the competition should really step up a notch with Team 911 gone.

Ken: “We might be up the creek… up the mountain without a bobsled, for God’s sake.”

Teri: “I would dangle again anytime.”

Recap: The Amazing Race 4, Episode 12 – “He’s A Couple of Ticks Away From Having a Heart Attack”

Recap: The Amazing Race 4, Episode 11 – “Such a Nice Pheromone Smell to You; Just Makes Me Want to Stay Close to You”