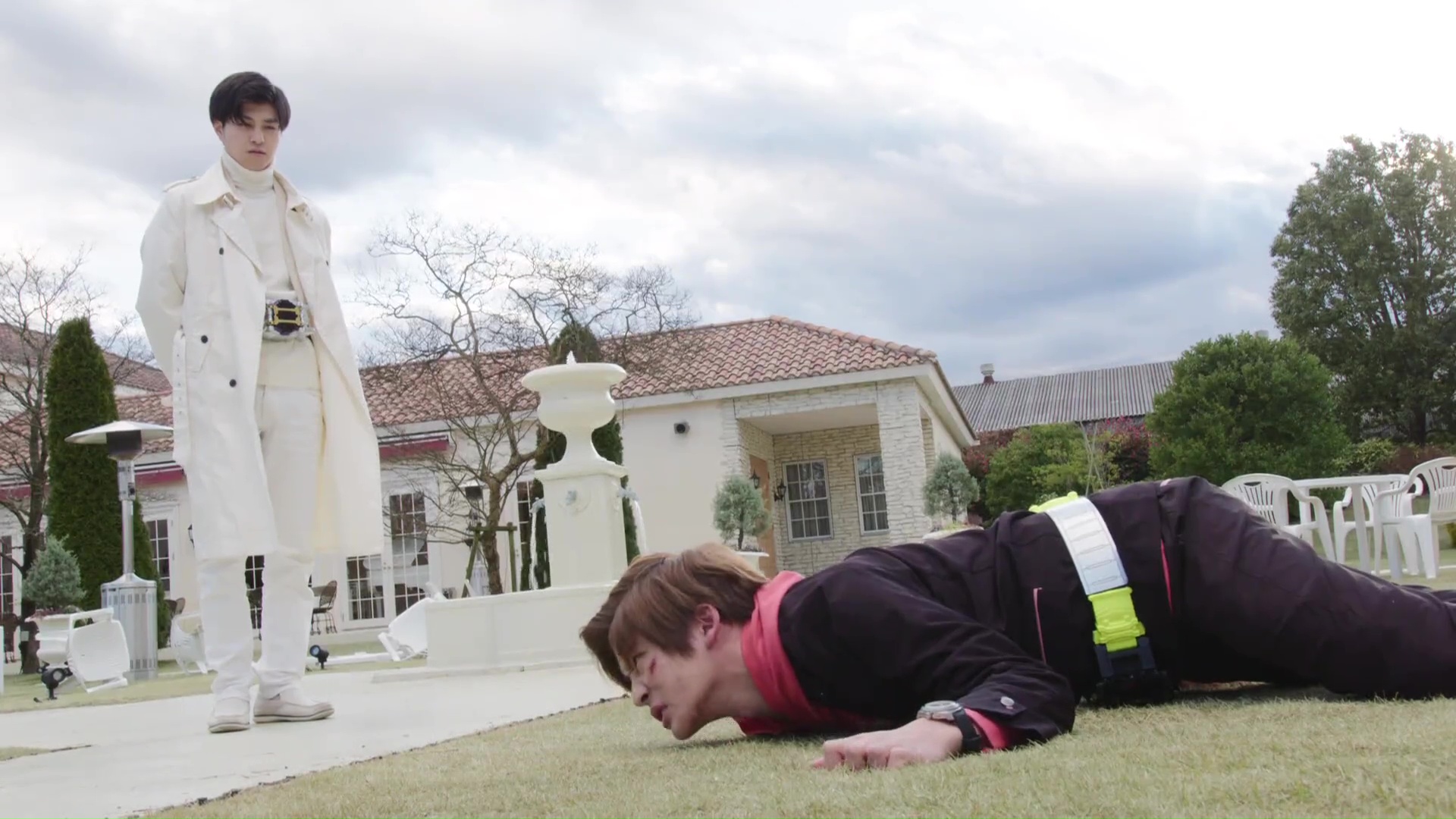 Metal Cluster is able to knock Gai onto his back. Enji tries to stop Aruto, not knowing he is being controlled by the Ark. Metal Cluster knocks Enji away and returns focus at Gai.

Gai delivers a Thousand Break at Metal Cluster and that is able to dehenshin Aruto, releasing him from the Ark’s grasp.

Gai predicts Aruto will be killed by the Humagears. Aruto loses consciousness.

Before Gai leaves, Enji approaches him and says he will abide by the will of the Ark.

Three days later, Aruto finally awakes in the hospital. He wants to quickly get back to work as he is afraid more Humagears will go berserk. Izu asks if he really thinks that will happen.

Aruto apologizes and says he of all people should trust in Humagears.

Match walks into the hospital room with flowers for Aruto, but also with some good news. He was able to find Chiharu a best match. He admits that he wanted to pretend to go out of control so as to nudge Chiharu toward Terou. Match had concluded that they were the best match from the start. And now they are engaged. 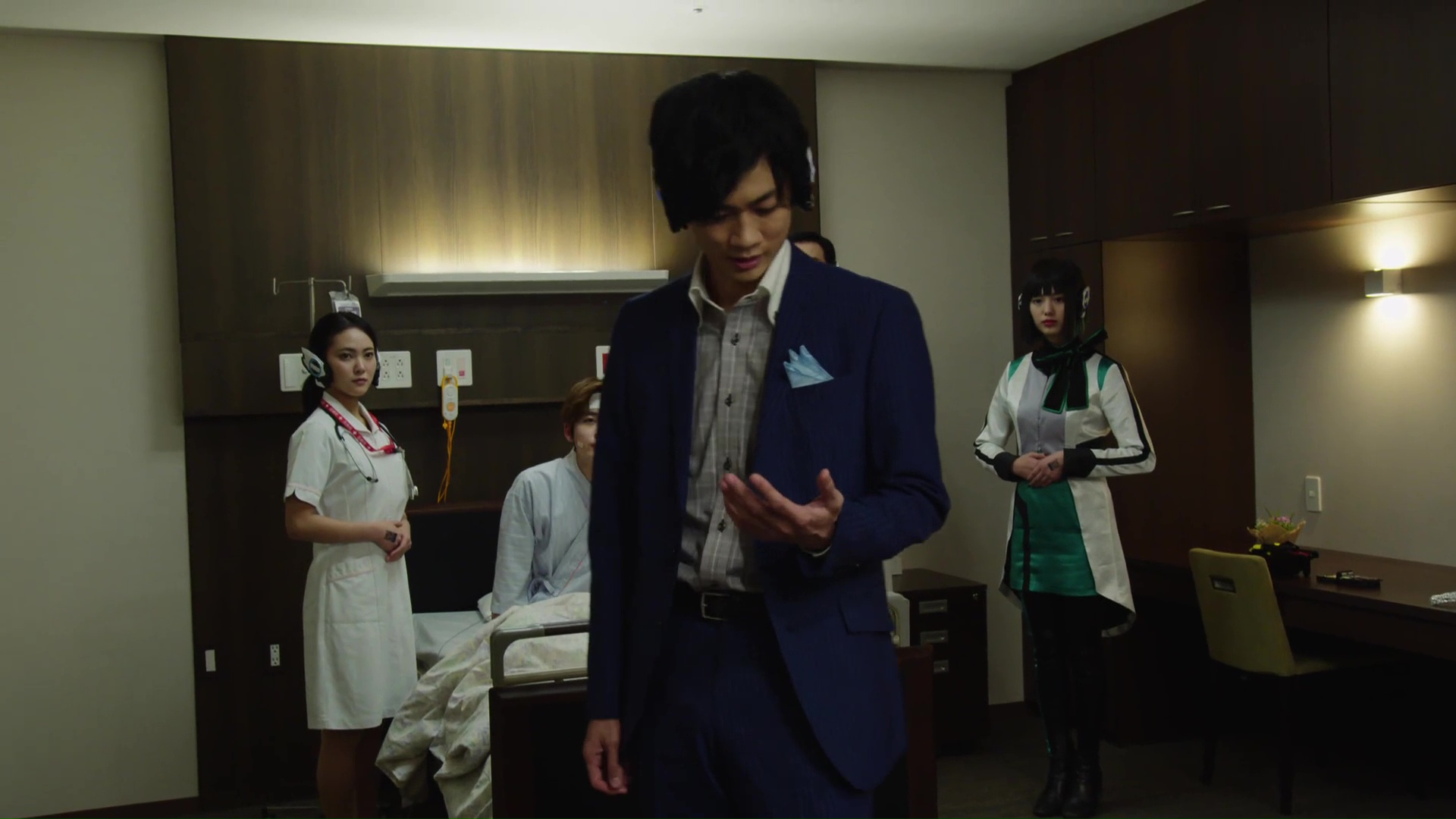 However, Match did not anticipate the Ark’s power to be so powerful that he lost control of himself.

Izu asks Aruto if he can entrust the Metal Cluster Key to her and for him to believe in Humagears once more. Izu contacts Subaru.

Meanwhile, Horobi tells Isamu that he and MetsubouJinrai act all according to the will of the Ark. And soon, all Humagears will bow down to the Ark. Isamu thinks it is pathetic that they would do whatever the Ark tells them to. But Horobi says Isamu is the same.

Horobi asks how Isamu can be sure he acts on his own free will?

Isamu kicks Horobi over and grabs him by the collar. Horobi just laughs.

Meanwhile, Enji is meeting with Gai, apparently ready to fully go along with whatever Gai wants him to do. Enji suggests he hack Hiden Intelligence from the inside. 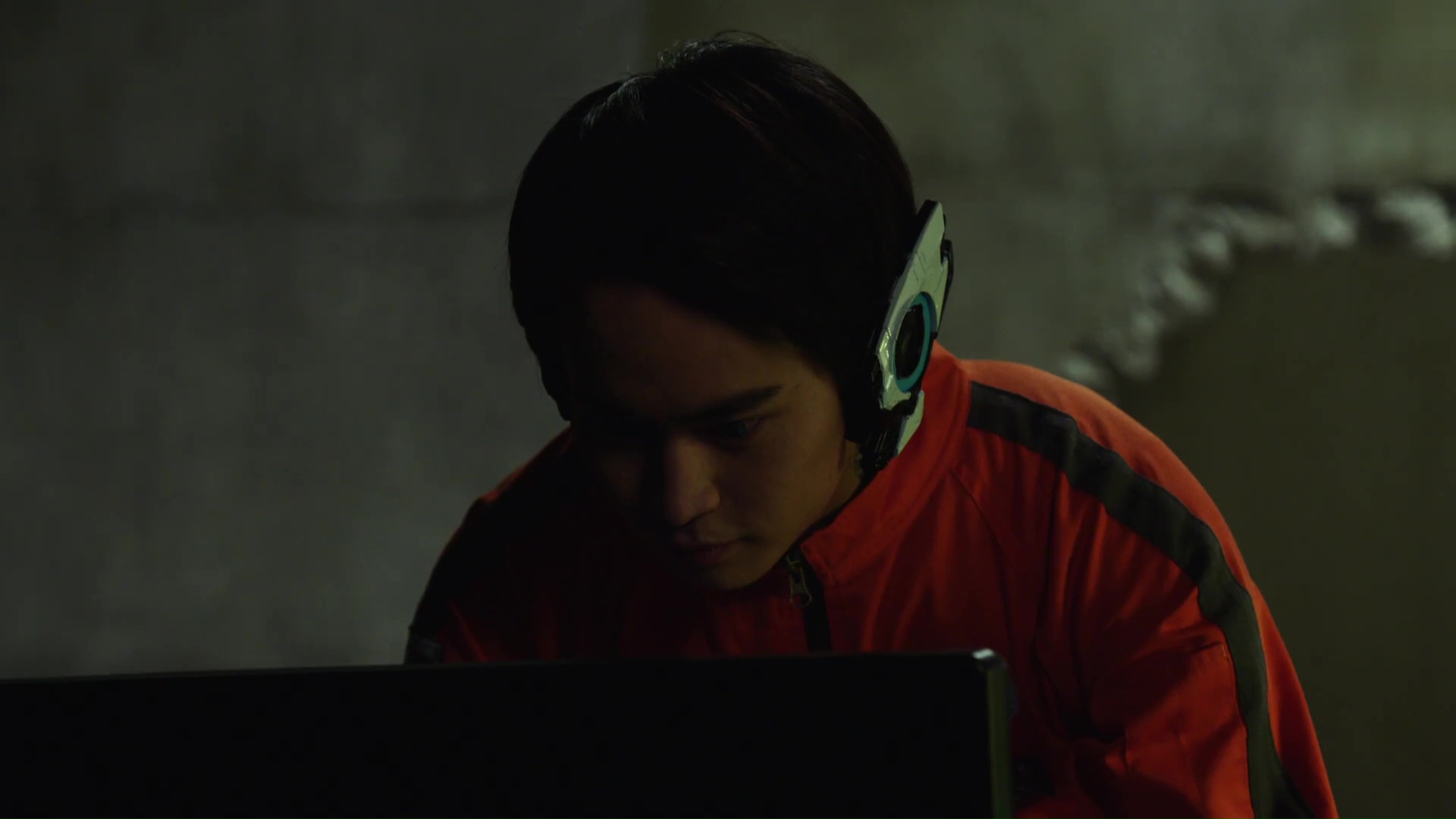 Over in Daybreak, Subaru and Oyakata are able to find Horobi’s control room in the Ark. Subaru is able to obtain data on Hiden Metal and the Metal Cluster Key and he immediately sends it to Izu.

Izu then calls all the Humagears Aruto has interacted with to ask them for good data in order to help their President who once helped all of them. With all the data, Izu is able to give ZEA the information needed to fabricate a new weapon she believes will help Aruto.

Later, Yua calls Gai to tell him that someone’s stolen data from the Daybreak computers.

Gai confronts Enji who admits that he was just doing what he’s programmed to do: acting. Enji tricked Gai into revealing the location of Hiden Metal data.

Gai slaps a Zetsumeriser on Enji and he turns into a Magia.

Dr. Omigoto hurries into Aruto’s room to inform him of what’s happened and officially discharges him from the hospital so he can deal with the situation.

Gai is battling the Magia to teach Enji a lesson. Aruto arrives and tries to stop Gai, but he just gets whacked back. 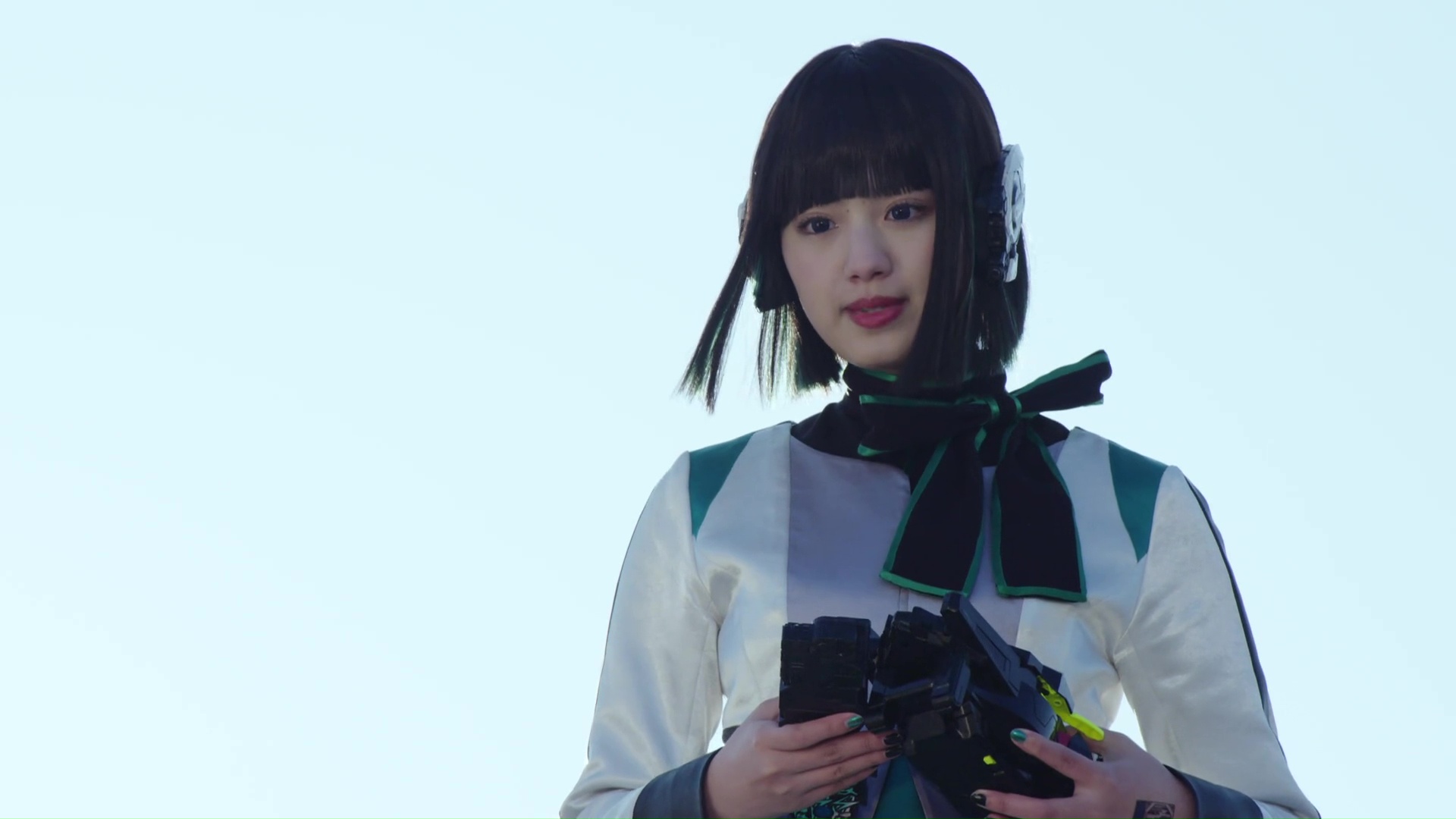 Izu hops down and hands him the Progrise Hopper Blade which uses the good data from all his Humagear friends to transport him from the Ark up to ZEA instead. 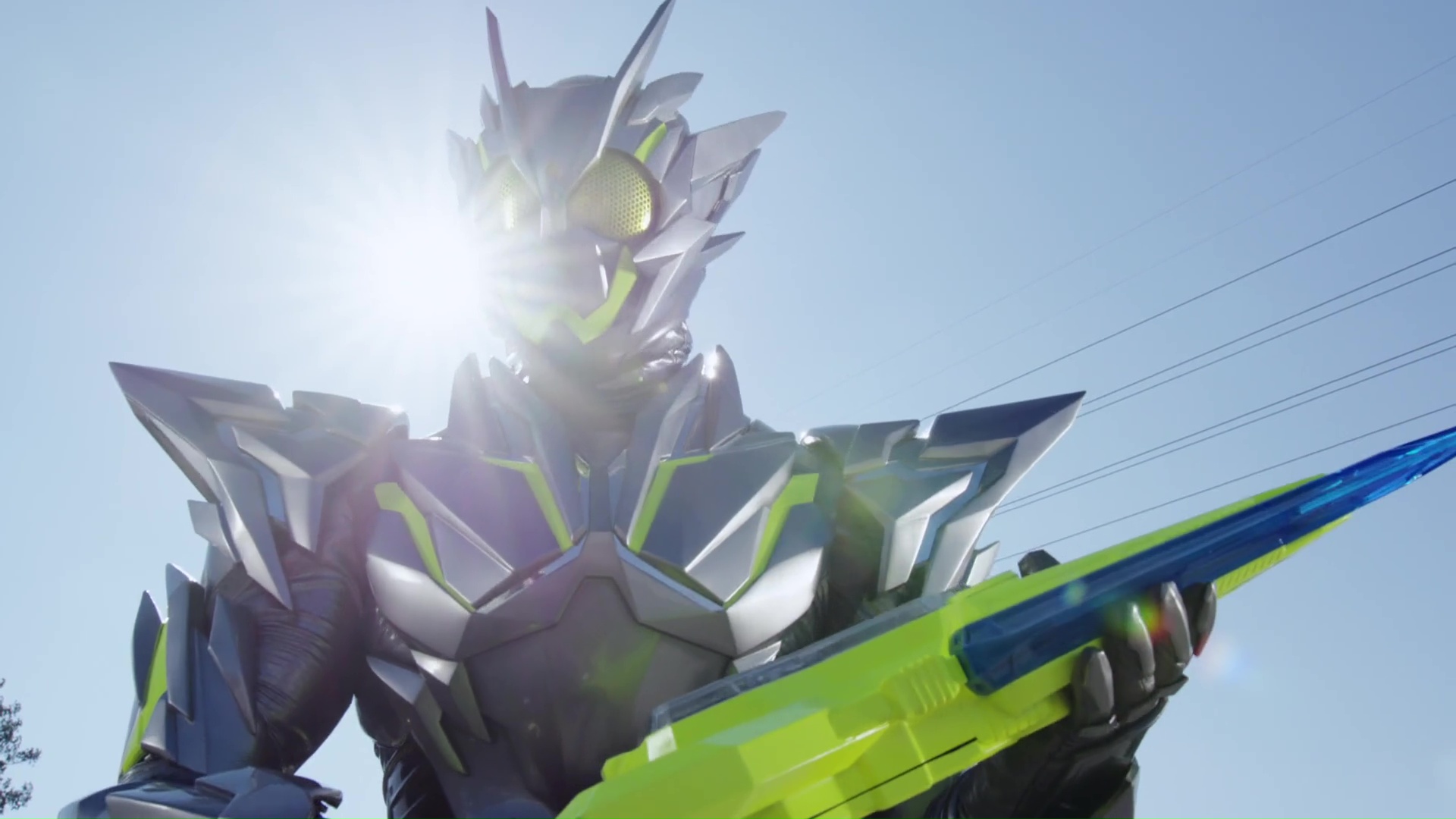 Metal Cluster has now been released from the Ark and Aruto is fully in control.

Aruto charges at Gai who is completely shell-shocked by this unexpected development. Aruto uses a Progrising Strash finisher at Gai, but Gai grabs Enji to shield him and absorb the attack.

Aruto catches Enji as he falls, dehenshining from the Magia. Aruto is surprised that Enji still remembers him even after being turned into a Magia.

Izu explains that the Blade appears to be able to restore Humagears who have been hacked by the Ark.

Izu takes Enji to safety and Aruto turns his attention back to Gai. Gai charges at Aruto, but Aruto delivers an Ultimate Strash at him, forcing him to dehenshin.

An indignant Gai vows to win next time.

Back at Hiden HQ, Izu reports that Hiden’s stocks and sales are back to normal. Aruto thanks Izu for what she did for him. But Izu says it was possible thanks to Aruto’s belief and trust in the Humagears. 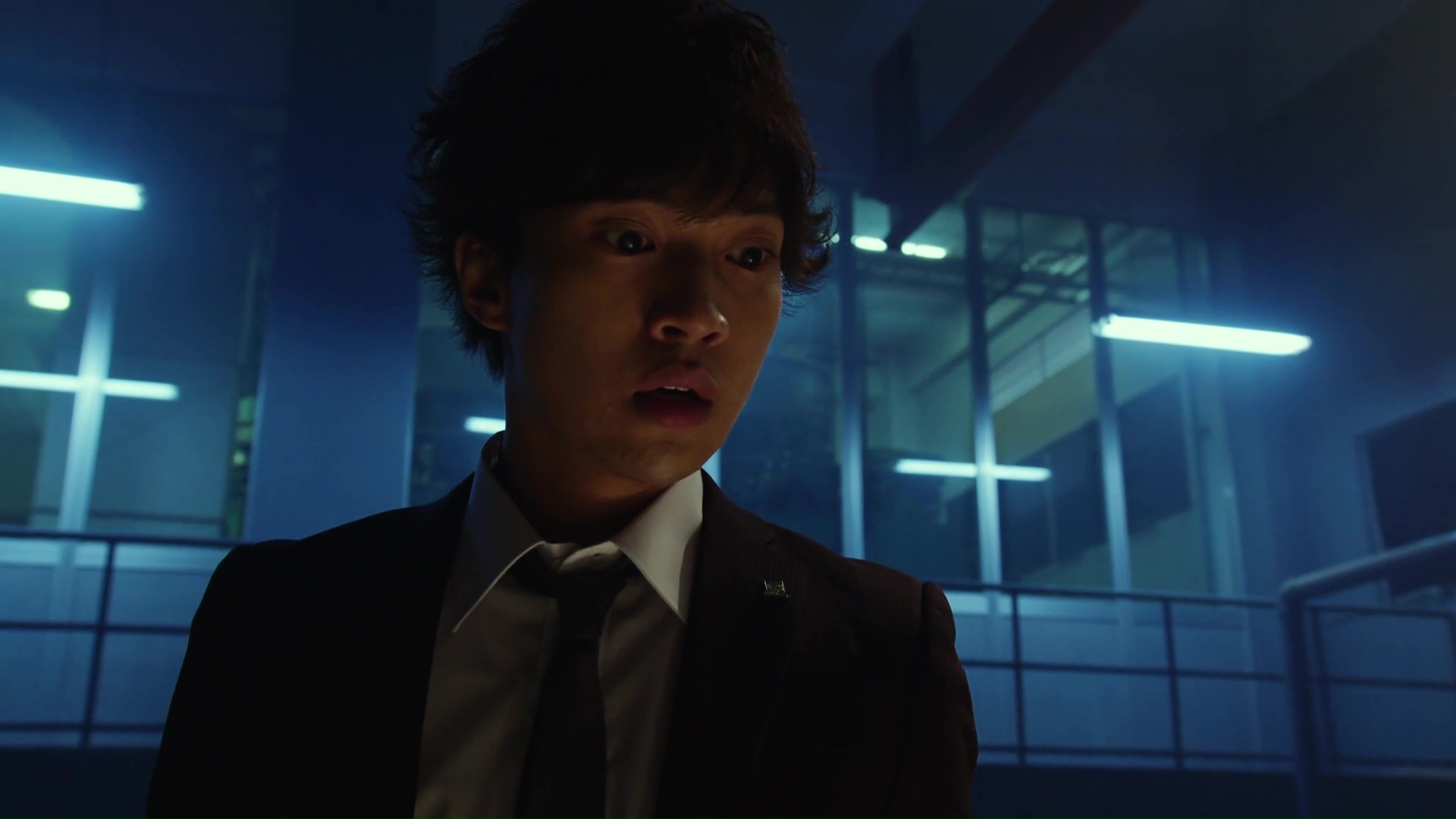 Meanwhile, Isamu is shocked to see Horobi has escaped!

This was definitely a great episode that concluded this mini-arc from the last couple of weeks. It also set-up the next chapter very well too.

Using the featured Humagears that Aruto personally helped and cared about was a great way to bring about the new power up. As we’ve always been reminded of, Humagears are able to accomplish their responsibilities through learning. Or, they could also be corrupted by being fed bad data. Here, we saw that good data was able to counter the corruption of the Ark. That is, data of not only good deeds in general. But of good that Aruto personally showed the Humagears.

It was a great moment getting all the familiar faces to join together to help Aruto.

I see the Blade’s power gives us the path for Jin to finally return! And I am definitely excited for that. Especially now that Horobi has apparently escaped, we’re definitely revving up for some big things.

What was very interesting was Horobi asking Isamu how he knows he acts of his own volition. Are we going to get into some kind of free will discussion on the show? Oh boy. Even more philosophical questions! Hehe. Looking forward to what that conversation leads to.

I hope that wasn’t Gai’s ultimate comeuppance. It was like a mini one to knock him down a couple of pegs, but not his ultimate embarrassing moment, you know? Either way, it was awesome and fun to see. And all these last weeks of him being an asshole made the moment here all the more satisfying! Lol

Overall, another great and satisfying episode!