The Boss henshins to Kamen Rider Grease. Ryuga quickly engages him, but Grease has too many fresh tricks up his sleeve and is able to get Ryuga down for the count. Misora runs over to Ryuga and Boss Grease is taken aback. He seems to recognize her.

Grease dehenshins, saying that’s enough for now. The Crows are disappointed their boss isn’t going to retrieve their Bottles for them.

Sento asks where Grease got the Driver. It was Soichi. Grease and the Crows leave for now, but Grease swears he’s seen Misora somewhere before.

Back at the lab, Sento realizes Soichi must have stolen the Sclash data. Misora remembers that night she found Soichi in the lab and apologizes for not realizing it sooner.

Anyway, Sento doesn’t want Ryuga to use the Sclash Driver anymore because it makes Ryuga more powerful than him. Sento says he is supposed to be the hero here. Plus, kids will be upset if a secondary Rider becomes stronger than the main Rider.

Just then, Sento gets a call and he goes upstairs to take it in private. Ryuga, Misora and Sawa listen in though. It is Soichi who admits he stole the data and had Nanba Heavy Industries make the Driver. Soichi says he knows Ryuga used it. But Sento does not want to let him anymore because he knows the Sclash Driver gives in to the effects of Nebula Gas and has side effects similar to the symptoms caused by the light of Pandora’s Box. That is, every time the Sclash Driver is used to henshin, it raises the user’s lust for war.

Soichi says they won’t have any hope of beating Hokuto without the Driver. But Sento says he will be the one to use it.

Soichi says he won’t tell Hokuto about Sento’s location because it would make the game boring. “What are you really trying to do?” Sento asks. Soichi says he merely wants to see them grow.

Next day, Sento and Ryuga meet Gentoku. Sento puts on the tracking bracelet and says they will fight off Hokuto, but not as weapons of war, only to protect Touto. 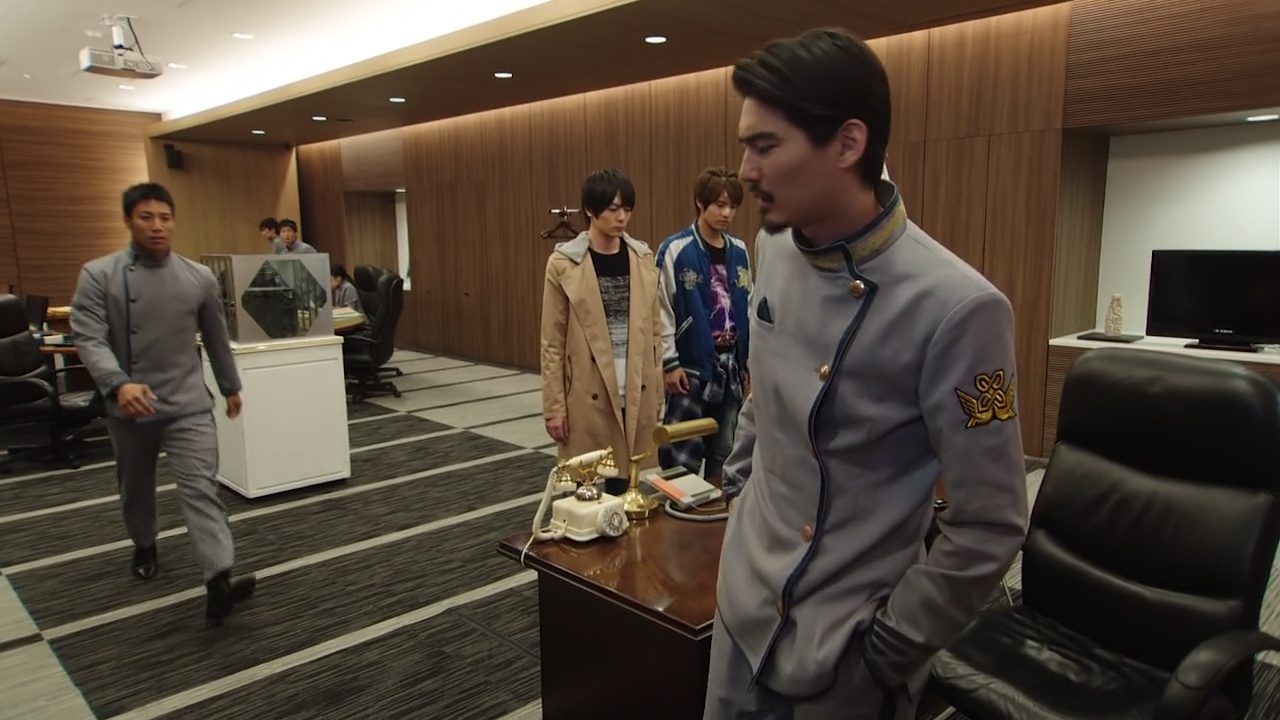 Gentoku asks how Hokuto got their hands on the Sclash Driver. Sento tells him about Soichi and Nanba. Gentoku decides they must figure out what Nanba is planning.

Meanwhile, Grease Boss takes over Touto’s news station to announce his arrival as Hokuto’s ultimate and only possible weapon in this new war. He says they are only after Pandora’s Box and the Bottles held by Kamen Rider Build. They will pull out of Touto as soon as the obtain them. They won’t be attacking civilians in general, but if they get in the way, they will be taken care of.

Sento says if Ryuga can use the Sclash Driver, then he should be able to as well.

Grease Boss calls the Hokuto PM to warn her not to get in his way. He has his own way of doing things, so she must not interfere. 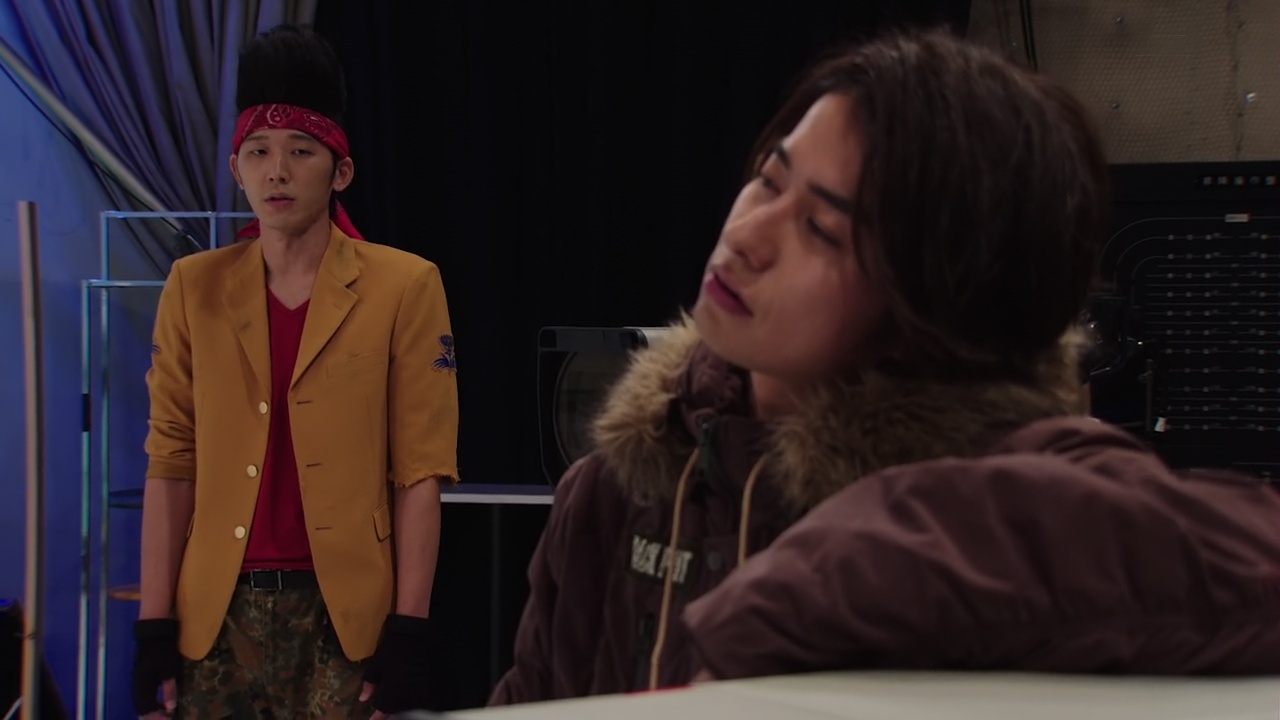 Akaba asks if Boss regrets doing this for the other Smash and their families. But Grease Boss says he’s just enjoying himself, that’s all.

Guardians arrive at the news station. Grease Boss heads out, henshins and takes them all on himself.

The Crows watch their Boss make easy work of the Guardians. But Sento and Ryuga come running. Sento tries to use the Sclash Driver, but it does not work on him at all.

Ryuga runs over and tries to grab the Driver, but Sento stops him. Ryuga says he has to do this instead of Sento because if something ever happened to him, Misora wouldn’t have anyone left.

“Even I died, no one would care. I’m most suited for this role.”

Ryuga straps on the Sclash Driver and henshins. He and Grease battle.

The Crows surround Sento and demand their Bottles back. Instead, Sento uses the Phoenix and Robot Bottles to henshin to a Best Match Phoenix Robo.

Sento forces Kiba to demorph from his Smash form. Sento Builds Up to Smartphone Wolf and forces Aoba to demorph. 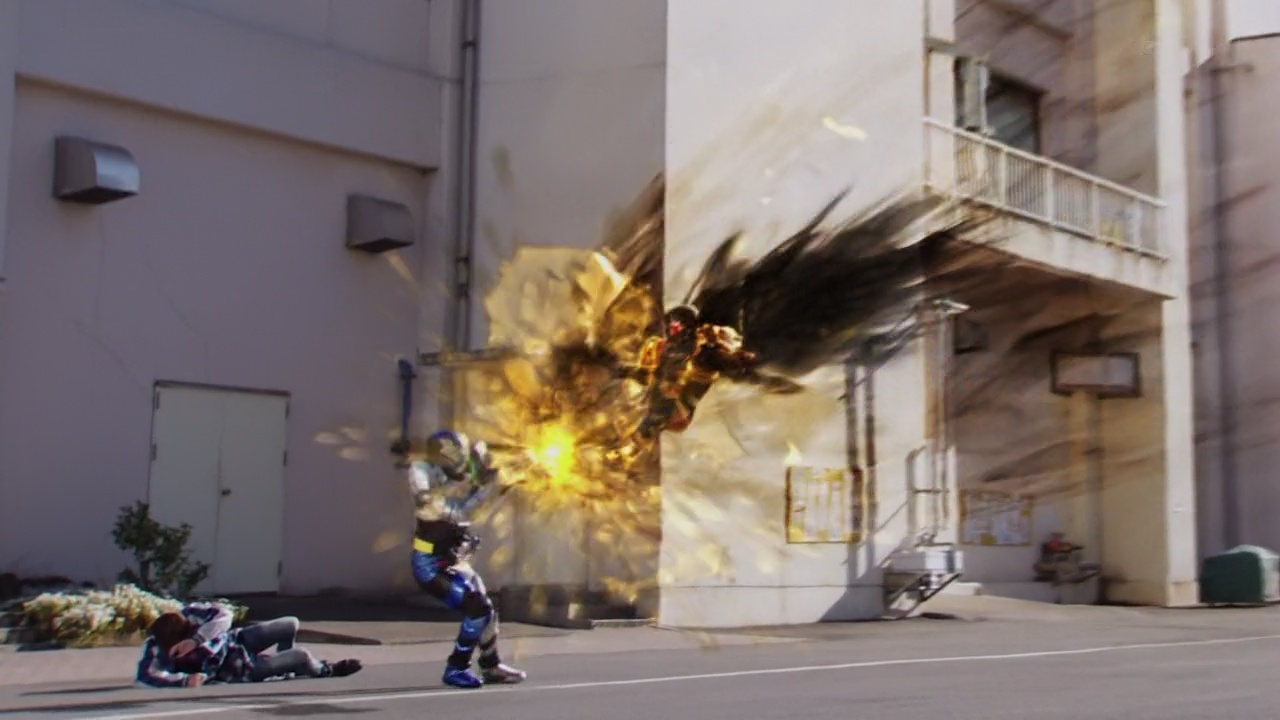 Ryuga asks Sento why he would do that. Sento says Ryuga is wrong about no one caring about him dying. Sento vows not to let anyone die. That’s what he’s all about. Grease Boss says that’s nonsense since they must kill each other in war.

Grease Boss kicks Sento and the Hard Smash’s FullBottles fall out of his pockets. Kiba and Aoba collect their Bottles. 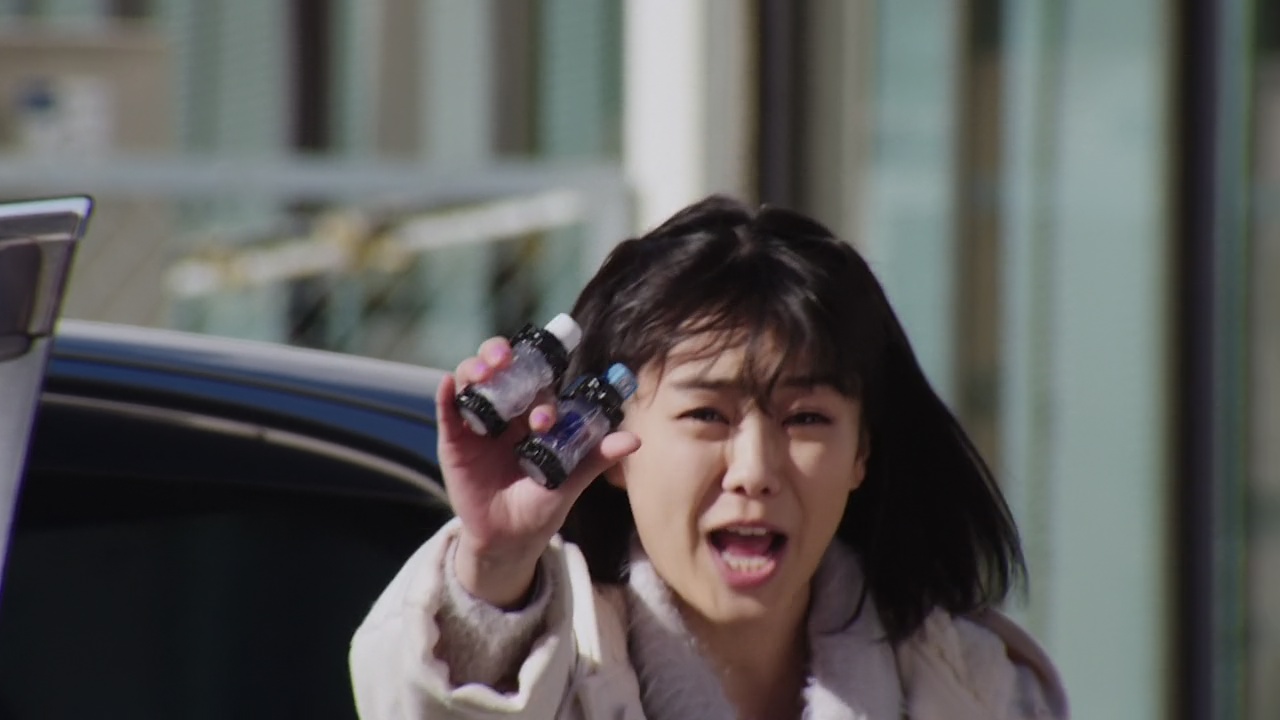 Just then, Sawa and Misora come speeding through. Misora tosses Sento two FullBottles and he henshins to Rocket Panda to allow him and Ryuga to escape.

Grease Boss is again mesmerized by Misora. He finally recognizes her. She is…

That night, Gentoku heads over to Nanba Heavy to meet with Nanba, but instead he is shocked to be met by…

It was a good episode, a solid introduction to Kazumi Sawatari. Though for now, he feels a little too much like Kyuranger‘s Tsurugi on first impressions. I will say that I was very amused by that fake out re: him recognizing Misora. On one hand, I was thinking “What is she? His sister? Daughter? Mother? Girlfriend? Grandma?” But, I think I prefer him just being a Miitan fanboy. I definitely wasn’t expecting that, especially considering we haven’t seen Miitan for a while and Misora has been out and about the last couple of episodes.

I’m interested in the Crows and possibly other Hard Smash family members, whatever that might mean. There’s definitely still a lot to reveal about their origins and what and who they even are exactly. That they can have emotions and personality is of course different.

I liked seeing the Sento-Ryuga bromance back in action. Though Sento didn’t come right out and say “I would care if you died” to Ryuga. And also Ryuga thinking Misora wouldn’t care about him either, especially since earlier in the episode, she ran straight to him after that big kick from Kazumi. (And everything we’ve seen between them so far of course. Hee.)

I enjoyed seeing Misora and Sawa come speeding in to the rescue as well. And the scene of them and Ryuga listening in on Sento’s phone call with Soichi was great. No point in needing to keep it secret from them of course. And it was something they would totally do anyway. Lol

Finally, the little twist with Nariaki at the end is cool. Nice to see there’s something more there and also nice to see Gentoku not in control of everything.

Also! Why did they use the Kyuranger bumper music for Grease’s debut henshin?


That was very strange. I recognized it immediately. Has that been done before? I don’t recall if the track was actually used in-show for Kyuranger too.

Overall, a good, solid episode. Setting up a lot of interesting paths forward for Build!