It’s another Leg for our ten teams who learn that their next destination is Colombo, Sri Lanka!

Once in Colombo, teams must find the Arcade Independence Square shopping mall and search the area for their next clue.

AND! The Forced Double U-Turn Vote Board sponsored by Samsung and Smart. If activated. 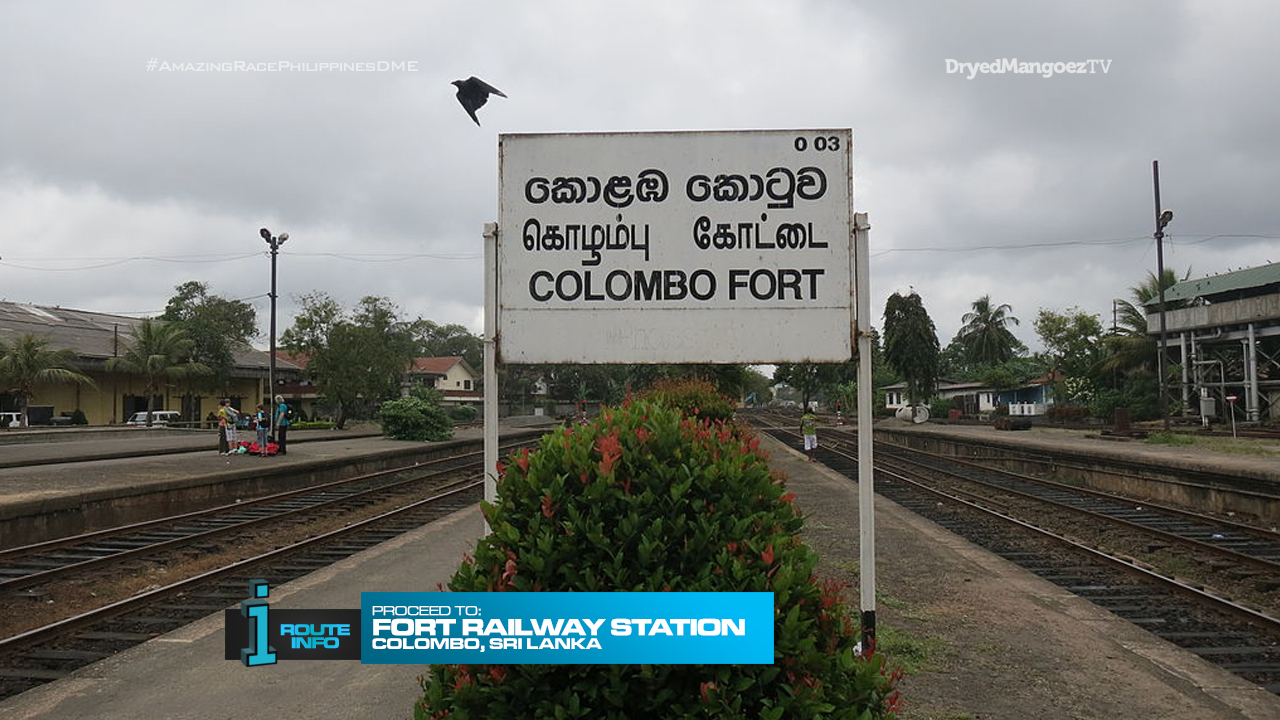 After voting for the two teams they wish to be U-Turned, teams must now make their way to Fort Railway Station where all teams will be on the same train to the town of Alawwa. 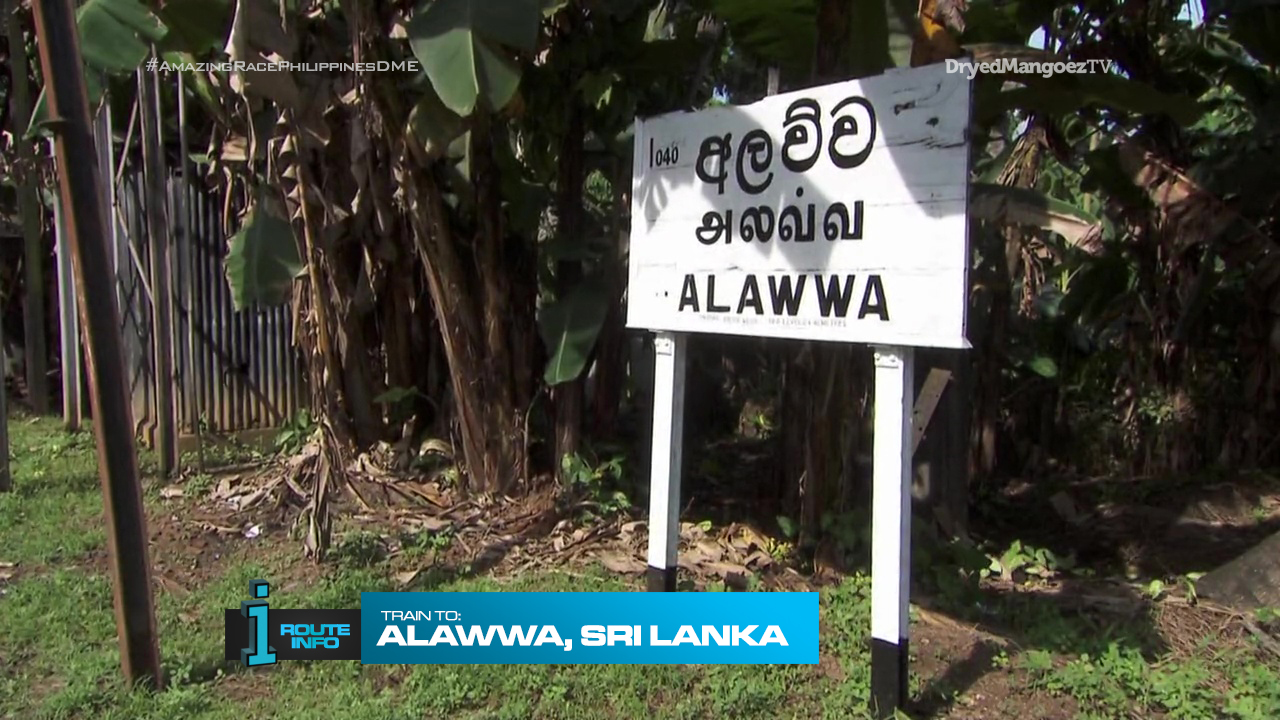 Once there, teams must find the Ceypetco Fuel Station for their next clue, the Road Block: Who’s ready to fill ‘er up?

For this Road Block, teams must choose a color badge inside the gas station and then search along a line of parked tuk-tuks for seven that have a matching colored badge on the windshield. Teams must then lead the tuk-tuks to the gas pump and fill their tanks with 3 liters worth of fuel each. Once they have seven full tanks, they will receive the next clue. 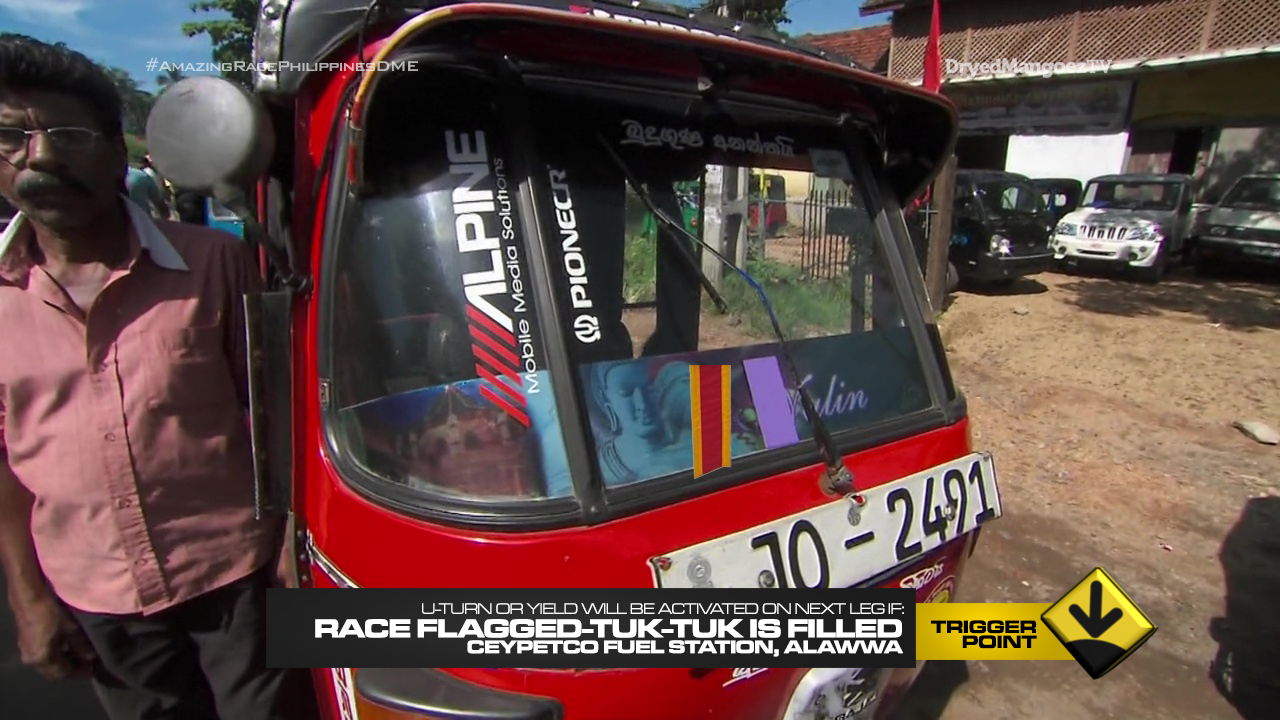 This is also the Trigger Point for this Leg. If any team fills up a tuk-tuk painted with Race colors on the front, the U-Turn or Yield will be activated on the next Leg.

Teams must now hop back onto a train to Rambukkana Railway Station. Their clue awaits outside. 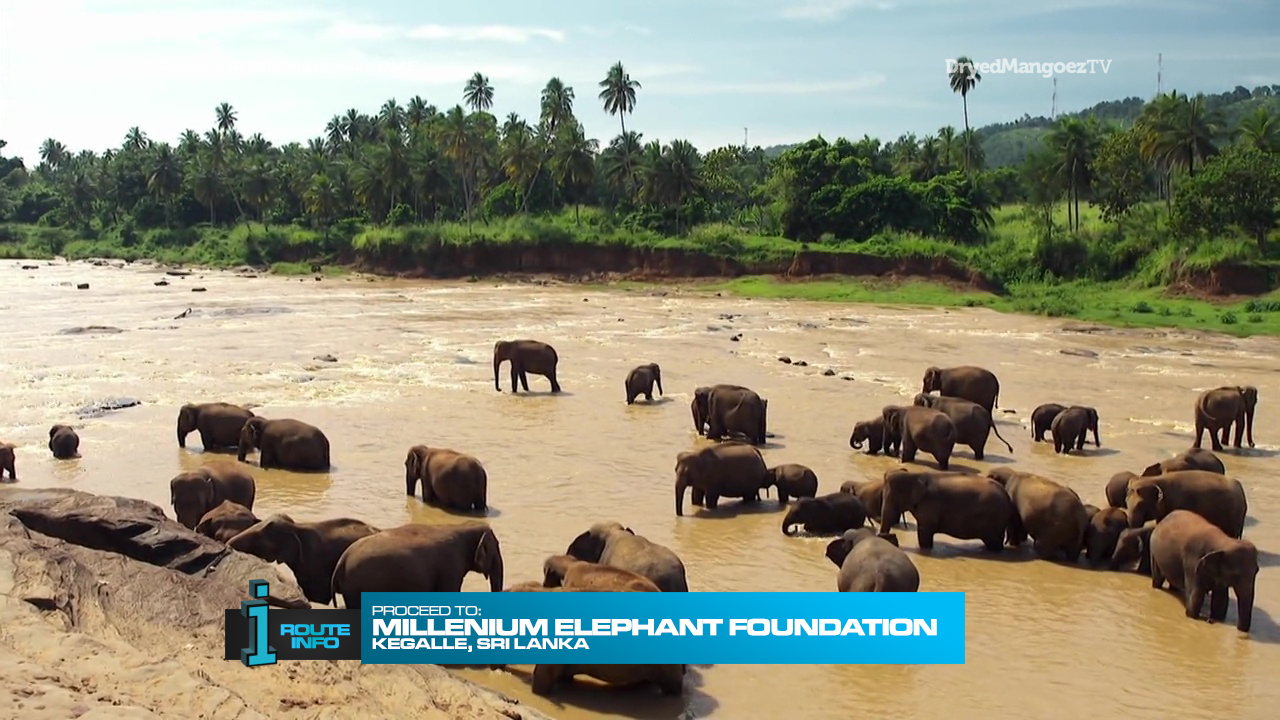 That clue directs teams to take a tuk-tuk to the Millennium Elephant Foundation in Kegalle. And here, teams will find the Detour: Log On or Dung Off.

In Log On, teams will work with a new elephant friend to transport 2 logs each to a waiting truck. Teams will then have to bathe their new friend and feed them a snack to receive their next clue. 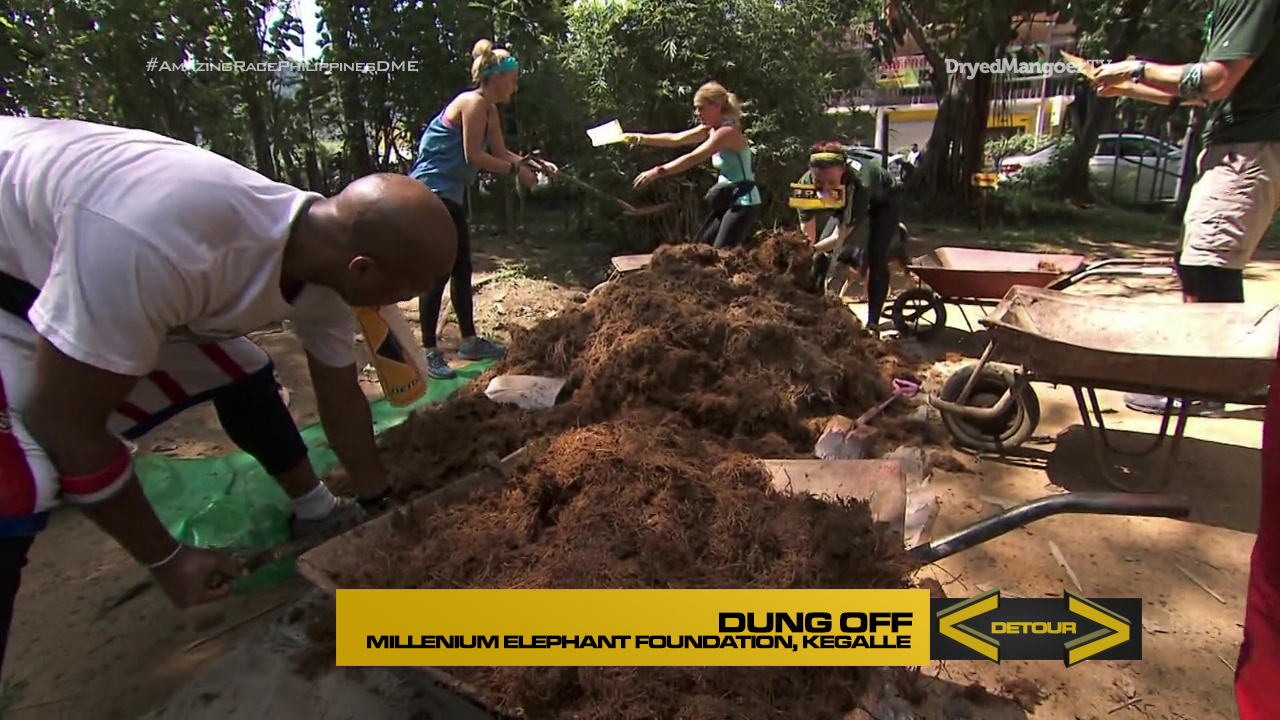 In Dung Off, teams must collect elephant dung in a wheelbarrow and use it to create pulp to be used to make recycled paper. Once teams have made 10 full sheets of paper and hung them to dry, they will receive their next clue.

After the Detour, teams must search the area for the U-Turn Reveal Board before moving on.

Teams will now take another train on to Kandy.

Once in Kandy, teams must find the Ceylon Tea Museum.

Here, teams must identify 10 different types of tea by only their sense of taste or smell to receive their next clue. 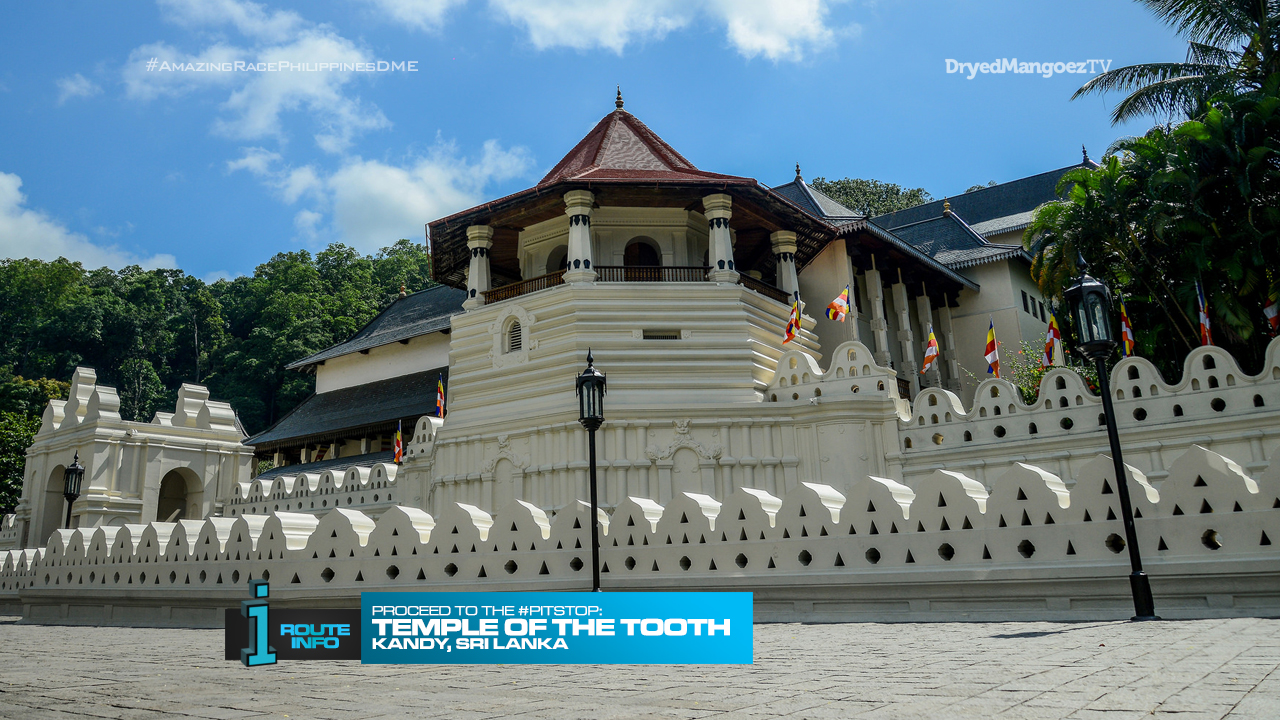 And that clue directs teams to the Temple of the Tooth, the Pit Stop for this Leg of the Race.

The last team to check-in here… WILL NOT be eliminated! This is the first Non-Elimination Leg of the Race and this last place team will now choose a Non-Elimination Penalty Envelope:

I might have mentioned it before, but I really have no idea why I keep recycling legs from the season that must not be named. lol This Leg is certainly another one of those. And honestly the only reason that I recycled this leg for prospective Filipino Racers is just to have that Road Block with the tuk-tuks. That Road Block was really one of the best examples of having teams racing side-by-side instead of artificially spreading them out. Imagine if only one or two teams have been doing that Road Block at one time. It would have been a complete failure. But as we saw on TAR24, the madness of having all those teams there and doing the Road Block at the same time was really the main appeal of that task.

So I’m definitely going to have that here on this Sri Lanka Leg which is more of a logistical necessity connecting Indonesia to wherever our next destination will be.

I know there are certainly better locations and even better tasks across Sri Lanka that have not yet been done on any Amazing Race. But of course our lack of on the ground scouting prevents us from finding those tasks and locations. Lol

The Road Block is also a little more difficult since teams have to do seven tuk-tuks here. It’s also a great spot for the Trigger Point. And with 10! Teams this time, it should be even more insanely hilarious.

I decided to just recycle the Detour. Working with elephants is great and a once-in-a-lifetime experience of course. And both sides of the Detour are made a little more challenging than the original.

For the last part of this Leg, I decided to have teams continue on to Kandy. I think a whole Leg could probably be staged in Kandy alone. But with all the train rides this Leg and the horrible possibility of teams getting left behind, I decided to make this a Non-Elimination Leg. It’s a good spot for it.

The tea task in Kandy is certainly not new for TARPHDME. But it’s a good extra task at the end of the Leg.

So overall a pretty solid leg that hinges on the craziness that we want to see at the Road Block and any drama and tension that might arise from having to take the train the entire leg.