Everything’s peaceful in the two worlds again. The Gang prays in front of Papa Ryu’s grave, happily telling him of Takeru’s resurrection. They all also promise to spread their connecting powers.

Javert arrives and wants to apply at the temple.

Downtown, a little boy emerges from an eye gate looking for someone who holds the key to changing the world.

Later, Takeru comes home from school, a little overwhelmed after being away for half a year. Akari offers to tutor him. He wants to take a break, but Akari reminds him that tonight is his second birthday party, so they must study now.

Alain is downtown painting the pretty blue sky and promising Fumi-baa that he will bring the blueness to the G World. Elsewhere, Makoto and Kanon are coming home from grocery shopping. Makoto tells Kanon that he wants to carry on their father’s wish and help Alain in his efforts.

Suddenly, they all see the eye gate appear from the sky.

A funny looking Rider approaches the little boy who is holding something in his hand. Makoto and Alain henshin and chase the Rider off. The little boy doesn’t say anything except “Tenkuuji Takeru,” so they bring him home.

Takeru asks the boy his name and the boy says “Ayumu.” Instead of answering Takeru’s other questions, Ayumu starts talking about strange things like saving the world and why Takeru didn’t just stay dead.

Takeru says life is a miracle.

They invite Ayumu to the birthday party to celebrate Takeru being born again.

Alain thanks Takeru for teaching him how awesome it is to be human. That’s why he must say goodbye soon so he can return to the G World and change it to what he wants it to become. Makoto and Kanon say they will join Alain to help as well.

While Grampa Sennin, Narita, Shibuya and Javert start dancing, Takeru decides to grill Ayumu. Alain draws a picture of the guy chasing him.

Ayumu shows them the strange thing and says it holds the power to change the world which is why the guy is after him.

Takeru wants to know if it can change the world for the better, but Ayumu says that’s pointless since the future is only dark and depressing. Onari says Ayumu’s parents must have taught him to have hope, but Ayumu just thinks everyone’s an idiot and runs into the other room to sleep.

Takeru, Akari and Onari watch him as he sleeps wondering why he’s so weird.

Ayumu calls out his father so Takeru sleeps next to him.

Next morning, Alain (armed with a takoyaki maker), Makoto and Kanon leave for the G World.

Ayumu thinks the three of them are on a futile journey. The world can’t be changed, he says. Takeru says their feelings will be enough to accomplish the world changing. That’s how he was able to do it here with his father, luminaries and friends’ help.

Ayumu runs into the forest and runs into strange boxes and creatures growing from strange blobs on the ground. It’s a strange situation, so Takeru henshins to fight them off.

That’s when another, pink Rider arrives to also fight off the orange-headed creatures.

The pink Rider approaches Ayumu and asks for the world thing. Takeru thinks this is the same guy who attacked his friends, but the pink Rider denies that.

Needing another quick fight scene, more orange head things arrive so Takeru and pink Rider finish off those as well. Takeru dehenshins and he shakes hands with the pink Rider who says they’ll see each other again in the future movies.

The pink Rider hops away and releases an Ex-Aid Eyecon for Takeru.

Takeru tells Ayumu that meeting and connecting with people is what will change the world. Ayumu cries because Takeru won’t be with him to have that feeling power. He’ll be helpless without Takeru. But Takeru’s hug power comes to the rescue and that eases Ayumu’s worry. Takeru will always be with Ayumu, in his heart. 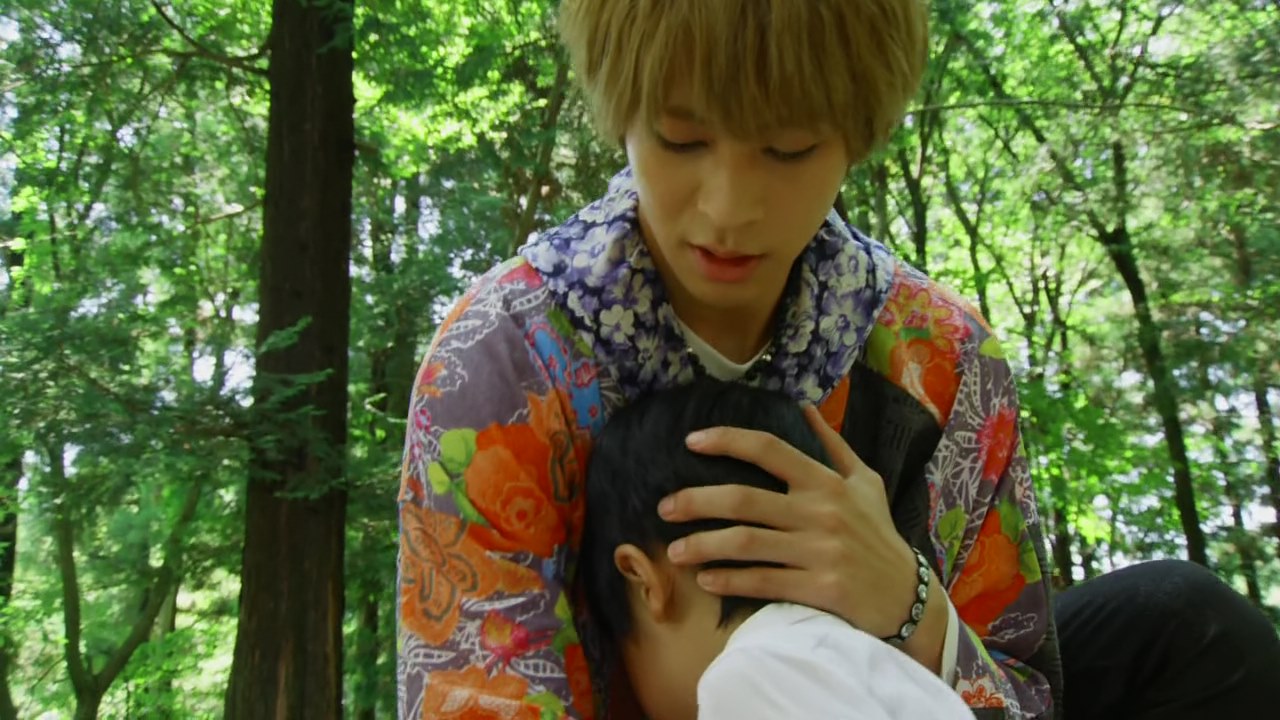 Takeru believes in Ayumu. Ayumu is satisfied with what Takeru has shown him, just as he was told. Ayumu says he’ll connect feelings too and backs into an eye gate.

With a thanks, Ayumu disappears. Takeru knows they’ll meet again in the future.

Alain, Makoto and Kanon look out over the dark, red G World. They are confident they will change the world and create the future.

Back at the temple, no one wants to help Onari, Grampa Sennin takes over the temple, Akari does science things and Takeru has to finish school.

Oh boy. What was this episode even. Completely unnecessary. It did absolutely nothing for either Ghost or Ex-Aid.

This might have been the most pointless of the Kamen Rider epilogues since they started them. Whereas the other epilogues actually added to their respective stories and added a little to various characters, this Ghost epilogue might have even made characters worse than they were last episode.

Oh well. Ghost is over over. It will be nice to revisit the characters next year in the versus movie. But otherwise, it’s been a disappointing year. Congrats to the cast and crew on successfully completing the series. But man, do I wish Ghost had been better.

Good Ol’ Review: Sit Back and Just Hop Along for the Ride on “Kamen Rider Zi-O Over Quartzer”