As a big Amazing Race fan, I always like to check out the international franchises of the show. (Also since Amazing Race US has been on such a decline in recent years.)

It’s always interesting to see the differences and similarities to the same basic TAR format. However sometimes, the language barrier has been an obstacle for me to really get into a foreign, non-English speaking TAR. That’s the main reason I haven’t gotten into Israel’s HaMerotz LaMillion which many have praised for being one of the best franchises. Another reason is their ridiculously long Legs spanning anywhere from two to four episodes, more than an hour each.

The fact that not all of these international TARs are readily available online is also a setback. Which is why I’ve very much appreciated The Amazing Race Vietnam for having full episodes on their official YouTube channel unblocked for the world to enjoy. (See that TV5 and Amazing Race Philippines?) But again, the language barrier keeps me from getting fully engaged in a non-English speaking TAR while the longer, slower episodes end up being the deal breaker.

When China’s second Amazing Race franchise (the first was The Amazing Race: China Rush) premiered in 2014, I was definitely going to give it a shot.

I recognized a few people from the all-celebrity cast and was pleasantly surprised to hear many of the teams regularly speaking in English. But the show just felt different. Sure, the format was intact and the show was obviously recognizable as The Amazing Race.

But the overall vibe of the show felt off. The editing made the show feel very slow, the tasks were a little basic and Legs were as linear as you could ever get on TAR. The teams, while still very likeable even with a language barrier, didn’t seem very competitive. Maybe one or two teams you could easily see running in a normal format TAR, but many of the teams in both seasons 1 and 2 weren’t engaging enough to really make up for the modified elements of the Race which only made the series feel all the more awkward.

Some of those modifications included bringing back eliminated teams or introducing brand new teams in the middle of the Race as well as filming the Race in chunks with weeks in between them instead of one continuous, non-stop Race.

When you’re used to a format or routine after 15 years, these are pretty drastic changes.

Ultimately, the slow editing, long episodes and linear Legs made the show feel more like a chore to watch. (And if TAR China at only 90 minutes felt long, how would regularly watching HaMerotz LaMillion feel?!)

However, I was still happy to learn that the franchise would return for a 3rd season this year. And I, as I always make a point to do, would give the Chinese TAR another shot.

Before this 3rd season premiered, it was revealed that the series would officially be titled The Amazing Race China and use the original theme music and opening credits sequence. That turned out to be a harbinger of things to come. And it was all positive!

First off, The Amazing Race China 3 just looked and felt different from the first two seasons. It featured better and tighter editing. The episodes were more fast-paced despite a 90-minute runtime (without commercials). The familiar Amazing Race/Lee Sanders scoring mixed in with fresh, original music helped too.

The biggest drawback to longer Legs with more tasks is that they can become too linear. And linear Legs are one of the things that’s driven TARUS’ steep decline.

But unlike other international TARs that feature long, jam packed Legs, TAR China 3’s Legs were the complete opposite. Leg design was absolutely amazing this season. Tasks were difficult and challenging, while still being fun and enjoyable. That fostered some great competition and revealed great parity among the teams. (More on the excellent casting later.)

Many of the tasks from this season may be very familiar for dedicated TAR fans. Even the smallest of tweaks to recycled tasks that appeared on TARUS and other franchises made them feel fresh and exciting.

There wasn’t a Leg where a team just dominated all the way through. Teams fell behind or pulled ahead numerous times. Placement changes were frequent (and illustrated wonderfully by the helpful on-screen leaderboard). The leaderboard also showed that there wasn’t any kind of creative editing to create faux competition. Teams really were that close to each other most of the Race.

TAR China 3’s Legs and tasks were more challenging than anything TARUS and even TAR Canada have thrown at teams lately.

Some of the best tasks from this season:
-Acrobatic Road Block at Beijing National Stadium
-Any of the dancing/performing tasks
-Ninja Road Block
-Shooting Road Block in Italy
-Best use of Ferris Wheel for a task in Atlanta
-Monster truck Face Off in Atlanta
-Balloon dress in a cactus field in Mexico
-Teotihuacan puzzle
-Final memory task in Rio

And because of these great tasks and Leg design, any concern about the generic route of Olympic cities (including returning to Greece for the 2nd time in TAR China’s three-season history) just went away.

The Olympics theme sounded strange and limiting at first. But the route and theme just worked so well. The Olympic connections to tasks weren’t forced or contrived. Even the track and field events felt like natural fits within the Legs.

For any Amazing Race, casting is always important. And TAR China 3 had a winning cast.

The Amazing Race China has made no qualms about being focused on celebrities. Something that may frighten TAR fans in other countries, TAR China’s casting has been pretty solid over the three seasons. It’s a big accomplishment when TAR China is able to cast actual celebrities. People that the general public, even people who may not be Chinese, would be familiar with.

That did not change with TAR China 3. Casting Olympians and actual Olympic medalists was a nice touch. But what’s been amazing about TAR China’s casting and show itself is that they don’t let up in terms of tasks and challenges just because they have celebrities.

Other than filming Legs in chunks with breaks in between, providing free McDonald’s every Leg and comfortable hotel rooms between Legs, these teams still have to perform incredibly different tasks. And again, these tasks have been more challenging and with a greater number of such than TARUS.

But it was evident these teams, no matter how famous or wealthy, still gave their 100%. No divas or pretension from any of the teams. You could see everyone wanted to compete and wanted to win, and they enjoyed every minute of it.

That’s another very refreshing aspect I haven’t seen on TAR in a long time.

Arguably, TAR China had everything TAR Canada 4 should have had. And that’s probably why I enjoyed and had more fun watching TAR China than Canada this Summer.

The Amazing Race China 3 delivered in every aspect. Great teams, great competition, great Legs/Leg design, great tasks, great editing. Every minute was exciting and fun. And that’s coming from someone who doesn’t understand Chinese! Imagine how much more fun if I did understand the language!

But I am so happy The Amazing Race China was able to fill my TAR hunger this summer. After a lackluster TAR28 and a solid, if unexciting TAR Canada 4, TAR China 3 really blew my expectations out of the water and made me have the most fun I’ve had watching The Amazing Race since TAR25. I think The Amazing Race US and CBS can learn from TAR China 3.

So don’t let the language barrier discourage you from watching. For TAR fans or anyone who just wants to enjoy a fun adventure, The Amazing Race China is definitely worth watching.

Here’s to the next season of The Amazing Race China! 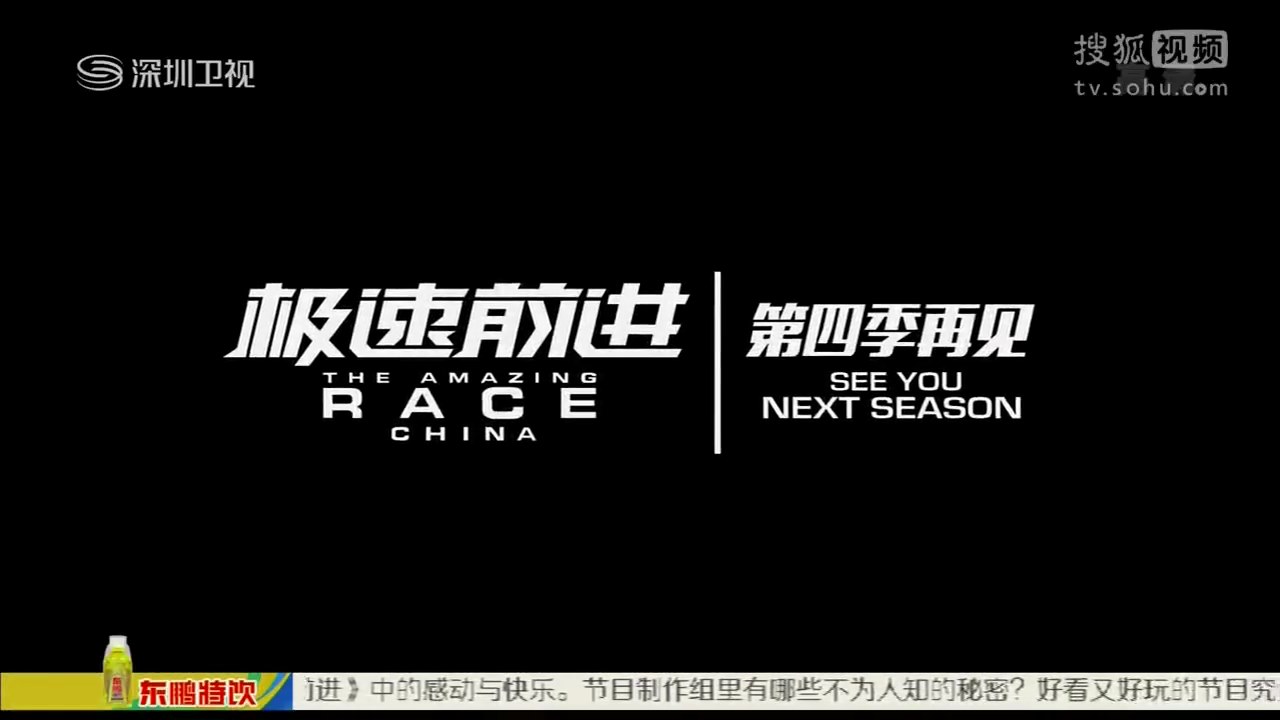 I really can’t even rank the teams because I liked and enjoyed every single one of them. I do, however, have to place Jin Xing & Hans right at the top. They were absolutely awesome. Jin Xing especially was very fun right from the start. She was a hilarious, sassy character who contrast well with Hans who was like the sidekick who’d get his own zingers in as well. Jin Xing & Hans for TAR: International All-Stars please!

Jingjing & Kenneth are like the nice, but competitive married couple. No bickering, no drama. Just a happy married couple who Raced very well all season long. It was a good win for them.

I don’t remember Liu Chang & Jin Dachuan to be so amazing in season 1 that they’d warrant an invite back two years later. But they were fun this season. An alpha-male who never dominated, per se, despite their high placements each Leg. Ultimately likeable and charming and a great finish for them, improving on their season 1 placement.

Vanness & Melody were the great sibling team who weren’t necessarily Wondertwins, but very competitive, charming and had a great relationship with each other. But of course, they weren’t without some tense moments that only a brother and sister could have as well. A tough way for them to go out, but a hard fought Race by them.

Zhang Zhehan & Zhang Sifan were the other “hunks” of the Race, this time actors instead of models like Liu Chang & Jin Dachuan. But they didn’t have a pretension of being handsome, young, popular actors. They were down to earth and ready to Race. Another unfortunate way to end their Race as well. But awesome to see them fighting to the end.

Huang Tingting & Sun Rui could’ve easily just been the girly girls, idol singers who are scared of everything and high maintenance. That’s the typical variety show archetype for female idols in Korea and Japan at least. But instead, they were tough competitors who powered through tasks, didn’t whine or complain and were actually ready to roll up their sleeves and just Race.

The same can be said for news anchors Zhang Meixi & Zang Yafei. Being comfortable behind a news desk is definitely different from being on a competitive Race around the world. While I was sad they were the first ones out, in those two Legs, they were competitive and Raced with lots of heart. No giving up from them either. Many teams from other TARs could learn a thing or two from them.

While it was unfortunate Ji Longxiang had to drop out of the Race, Liu Xiang & Xu Qifeng managed to step it up just when they needed to. A slow and steady Race for them. While it’s unfortunate they quit that final Road Block, ran a strong Race. And more power to Liu Xiang who had to face unfair criticism about dressing up for a task this Race, but still continue all the way to 3rd Place.