Recap: The Amazing Race Canada 4, Episode 10 – "My sneakers are two sizes too small!"

Teams will now take one of two buses to Saint John, New Brunswick. Before hopping on the bus, Jillian manages to get new sneakers from locals, but they’re a little snug.

Once there with their one Loonie on their BMO Cashback MasterCard, they will find the all-new 2016 Chevrolet Spark waiting downtown. That clue tells teams to drive to the City Market, find a Hotels.com kiosk and use the Hotels.com app to deliver gift baskets to five different nearby hotels.

Steph & Kristen exchange their five tickets for the next clue revealing the Detour: 1867 or 1879.
In 1867, teams must make their way to Canada’s oldest and largest independent brewery, Moosehead Brewery. They will choose a unique label and then quickly pull out enough bottles from a production line with the same label to fill five cases.
In 1879, teams will head to Crosby’s Molasses where they will create 650g of molasses taffy.

All teams choose molasses. Steph & Kristen get enough molasses and open the next clue revealing a Face Off.

For this Face Off, teams will play par-3 12th hole at Algonquin Golf Course.

Joel & Ashley’s molasses is incorrect and that allows Jillian & Emmett to get in front of them. Frankie & Amy are in last and they’ve incorrectly measured ingredients. It turns out it doesn’t matter and they get approved.

Joel & Ashley manage to arrive at the golf course before Jillian & Emmet and they face Steph & Kristen. Joel & Ashley are pretty good at golf and they win the Face Off.

They can now head to Kingsbrae Garden where they find the Road Block: Who can make sense of this clue?

For this Road Block, teams will be blindfolded and guided by their partners through the Scents and Sensitivity Garden where they will use only their hands and nose to learn the English names of 15 specific plants. They will then lead themselves down a path to another garden with the plants which they will use to identify them. 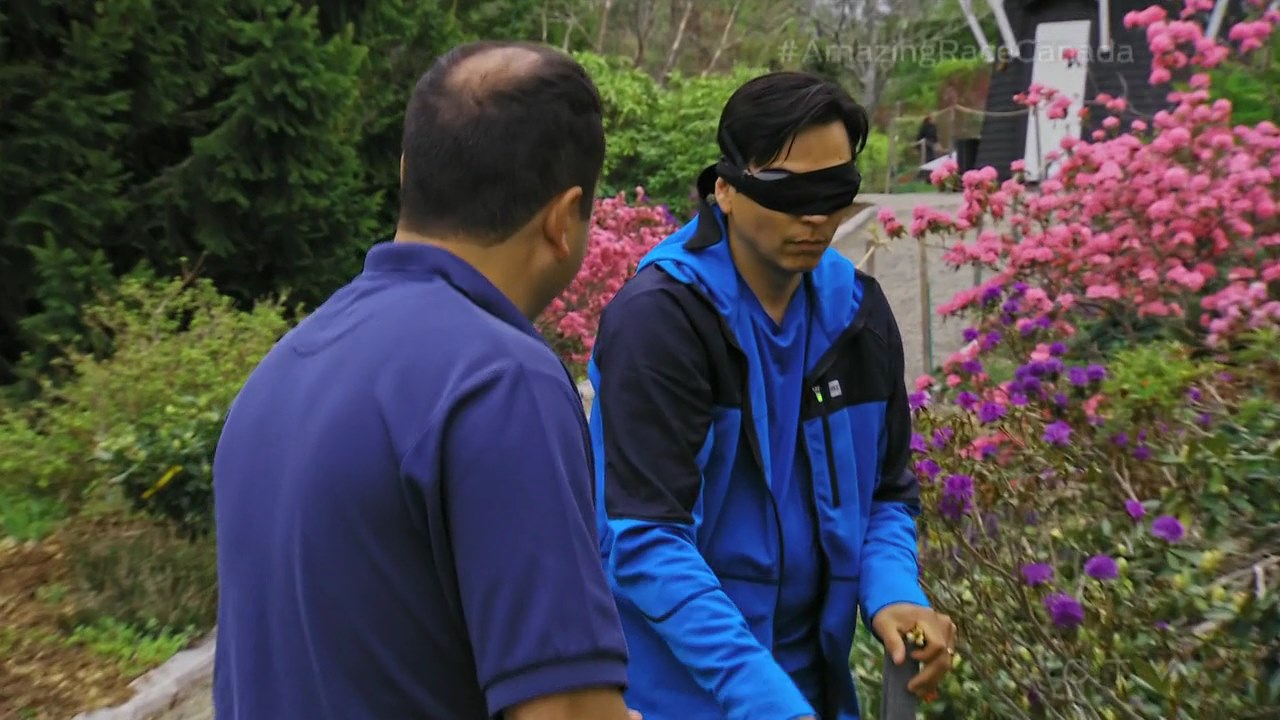 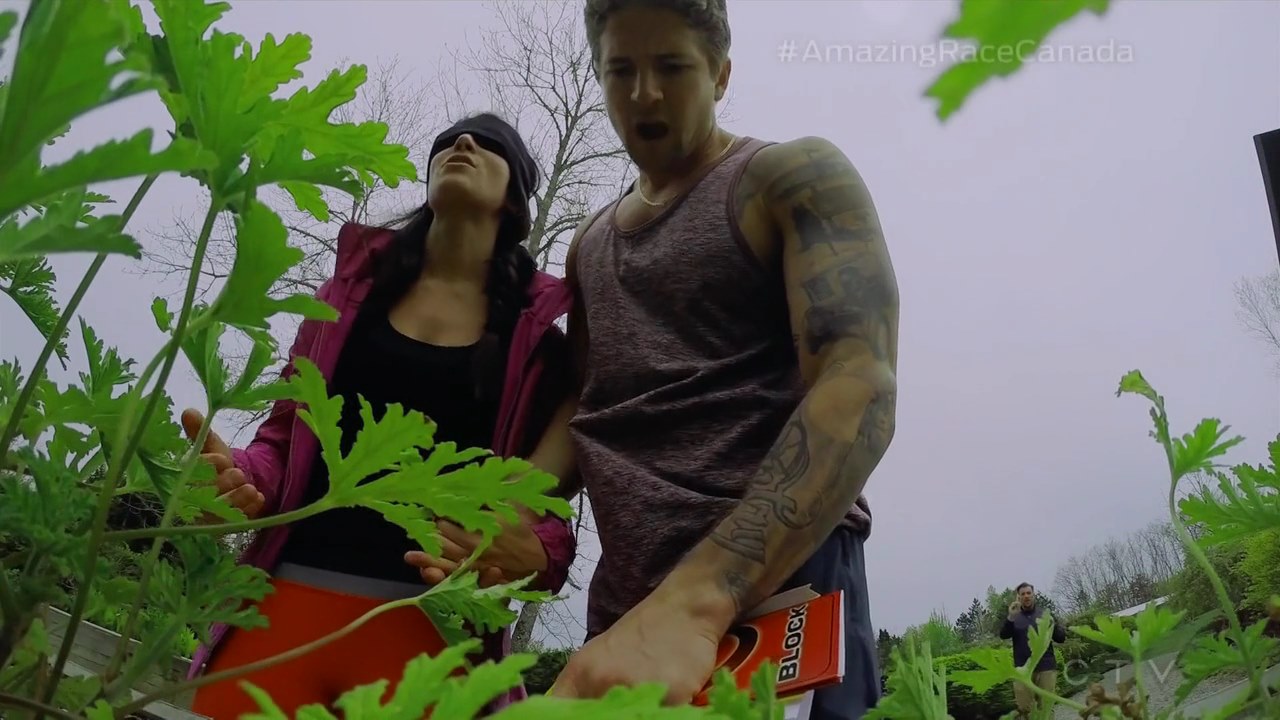 Joel decides to do this Road Block.

Back at the Face Off, Frankie & Amy lose their 2nd one and must wait out their penalty.

At the Road Block, Joel only gets 7 out 15 on his first attempt. Steph is now frustrated with the task and regrets doing it. Jillian and Amy are required to do this Road Block.

Jillian & Emmett think they have to memorize the scientific Latin names of the plants.

Frankie & Amy arrive and hearing Jillian & Emmett saying the funny words, they also think to memorize the scientific names over the English. Joel & Ashley hear them and realize they must be quiet and not let them on to their mistake.

Steph is on her 4th attempt and gets all 15 correct. She and Kristen can now use OnStar’s hands-free calling system to call Jon to get their next clue. Jon tells them to head to the Pit Stop in St. Andrews By-the-Sea. The last team WILL be eliminated.

Steph & Kristen officially check in as Team #1 and win a trip to Sydney, Australia.

Amy goes on her first attempt and the guy tells her she’s using the wrong language. They reread the clue and realize it’s supposed to be English. Amy is frustrated and has to take a moment and calm down.

Jillian goes on her first attempt and she is also told about using the wrong language. Jillian starts to cry. “We’re in big trouble.”

A confused Frankie leads Amy to the roped path. Frankie asks Ashley if they have to learn both and Ashley says they weren’t sure either so they learned both too.

She adds that Steph & Kristen were doing that as well.

Frankie & Amy decide to go back and make sure Amy’s got both names down.

Joel is on his 10th attempt and he finally gets the thumbs up. He and Ashley head to the Mat to check in as Team #2.

An emotional Amy heads back to her mother.

Jillian & Emmett step on the Mat as Team #3 and the last team into the Final Leg.

Frankie & Amy head to the Mat in last place and are officially eliminated by Jon.

This was an insane episode. As a Leg, pretty meh. But the tension built up this episode like I have not ever seen on The Amazing Race Canada before.

The highlight (for some, maybe the low-light) was certainly the Road Block. Going into it, I was like “Really? This is the Road Block on the penultimate Leg?” But then we got the insanity.

That pause when Jillian learns she’s using the wrong language was one of the most hilariously heartbreaking moments on any TAR I’ve ever seen. It was madness. THEN we got Ashley being absolutely sav lying to Frankie & Amy. Wow! That really was crazy.

I mean, it’s a simple case of READ YOUR CLUE really. And the clue seemed to be pretty clear that it was English they needed to learn.

Anyway, more on what I think about Ashley and the rest of the teams down below. Back to this Leg.

I think this would be a fine early Leg. The Hotels.com task should really take place earlier. And then we got another penultimate Leg Face Off which wasn’t as bad as others. But still, it has no place on a penultimate Leg.

The Detour seemed alright. It definitely felt like TAR Canada running out of tasks in the country. But teams all choosing the molasses shows there’s something wrong with that Detour design.

And back to the Road Block, it’s not a bad task. It’s actually pretty good. But I think it’s a task that would fit better on an earlier Leg as well.

Overall, it was a pretty basic Leg in terms of design made linear by that Face Off and the Road Block. But the teams certainly helped elevate the episode to more than just meh. And at least it wasn’t as horrible and embarrassing as last year’s criminal penultimate Leg and episode.

I am very happy to see Joel & Ashley make it to the final Leg. I hope they win and represent a much better parent-child TAR winner. You know what I mean? (*seasonandwinnerthatmustnotbenamed!*) They’ve kind of lost steam as an enjoyable team over the course of this season. But Ashley really put her and Joel right at the top of my TAR Canada list after that move at the Road Block. It was hardcore. The very definition of #sav and #savage. It was so cool and yet so cruel at the same time. Ashley definitely showed she’s an awesome actress, that’s for sure. I admit I may be biased since I’ve always liked Joel & Ashley. It was a pretty rough thing to do, lying and all. But it’s not the end of The Amazing Race world. I think there have been worse things and lies done on the Race before. And Ashley makes a good point about other teams lying this season. It’s part of the game. But I don’t mind being a hypocrite here if I ever was upset at a team I disliked or hated lied. =D

Anyway… Frankie & Amy just really had a terrible Leg. They also lost steam for me over the course of the Race. They started out with such great potential. But making it to the Final 4 is certainly not easy. They did well and were able to keep themselves in the Race, while having a couple of very, very good moments throughout. Still, I wish I were more excited about them as the Race went on.

This is the Jillian & Emmett I wanted to see more of during the Race. They were hilarious all Leg while still able to do well. I might not want to see them win, but I’m alright with them making it to the Final. Steph & Kristen definitely made a strong case for them to win the whole thing. But it’s hard not to compare them to Natalie & Meaghan who were much more exciting and engaging while dominating the Race.

Frankie: “I wanna be in the black.”

Ashley: “This is the best show ever.”

Jillian: “My sneakers are two sizes too small!”

Jillian: “This will be the single biggest mistake we made.”

Emmett: “It feels like a big ball of snot.”

Emmett: “We’re going to get a ball right in the head.”

Recap: The Amazing Race Canada 8, Episode 11 – “This win is for absolutely all of us.” + Season Wrap-up

Recap: The Amazing Race Canada 8, Episode 10 – Is That a Wild Peacock?

Recap: The Amazing Race Canada 8, Episode 8 – “This is not ‘The Amazing Friends Canada.'”