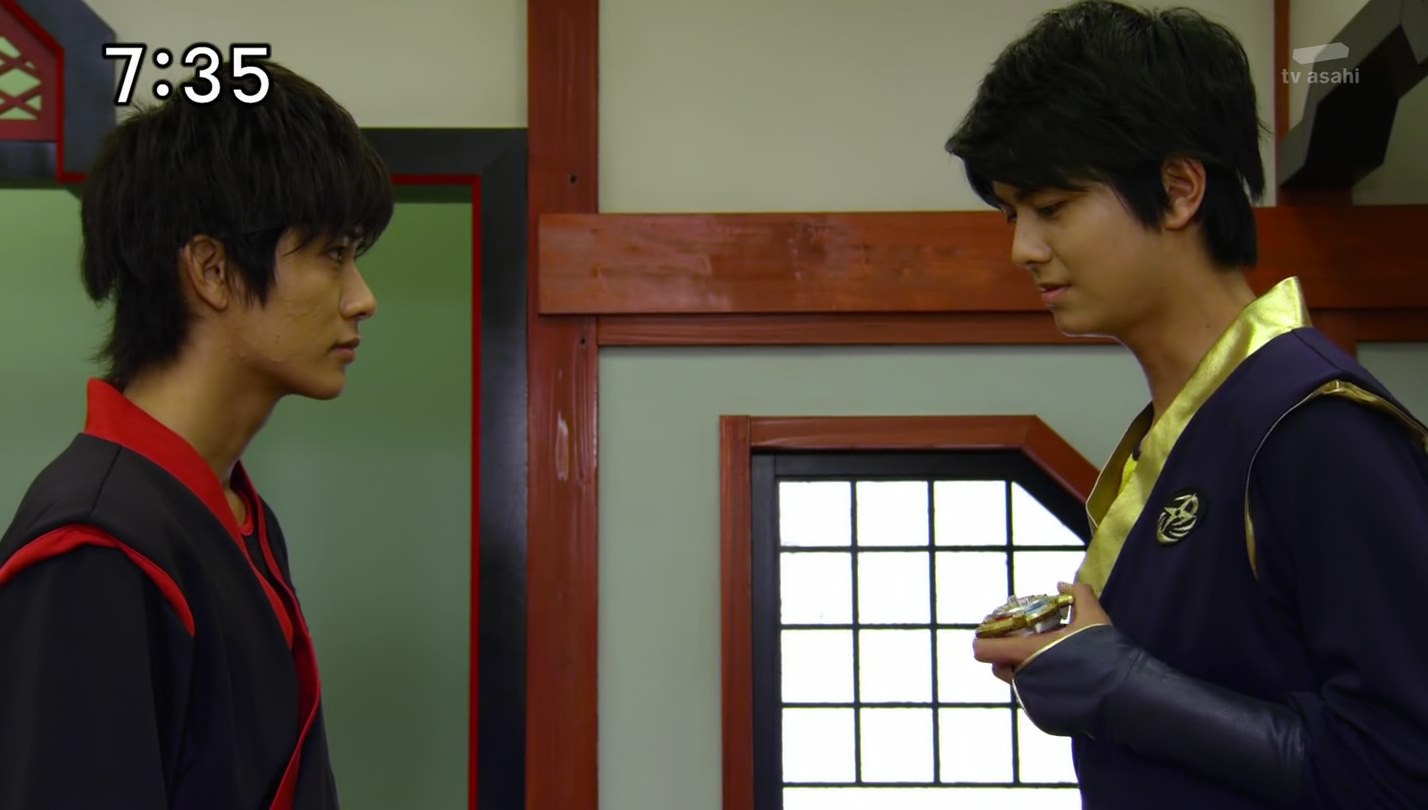 Grandpa has officially welcomed Kinji as an apprentice student and he decides to be their teacher for today. He tells them the Ninpou they’ve used so far has been just the basics and that they’ll need to learn more advanced techniques now. But since Kinji is not up to their level yet, they must all review the basics.

While Kyuuemon has revived Lady Ariake no Kata, the Ninningers try helping Kinji along. But he says he will learn the basics on his own instead.

Kinji heads to the park. He sees a little boy is working hard at training as well (pitching, in his case) and that motivates him. But Kinji still has trouble.

The cousins follow him to the park. They know Kinji taught himself thunder and wind techniques, which are much more advanced, thus making it a little hard for him to try the simpler ones.

The Ninningers see two boys teasing the little pitcher, but he says it doesn’t bother him since his dream is to be a pro player some day. He tells Kinji they should both do their best.

A sealing shuriken has attached to a woman’s purse to create Youkai Baku who eats up people’s dreams. 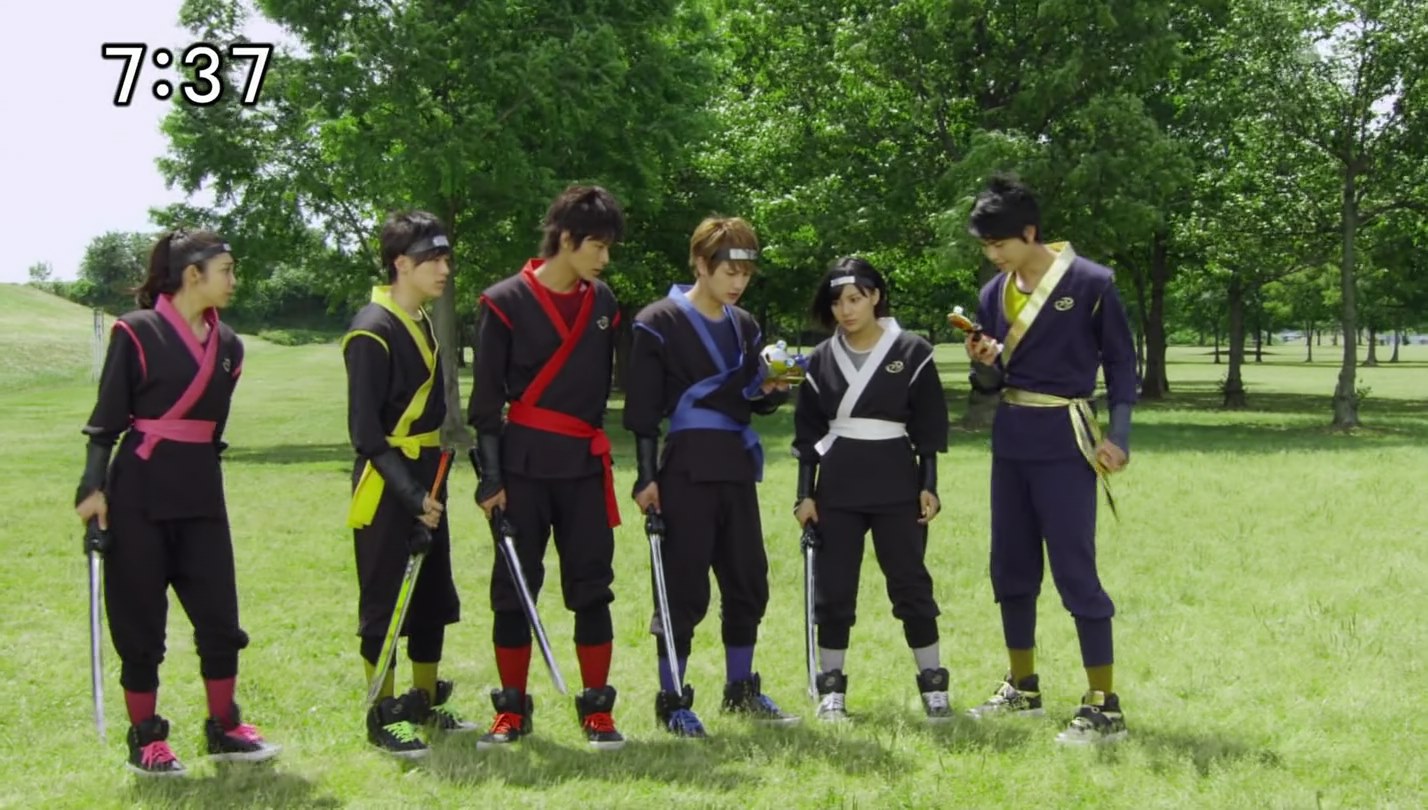 Ariake no Kata introduces herself as Kibaoni Gengetsu’s wife before ordering Baku to gather more fear. 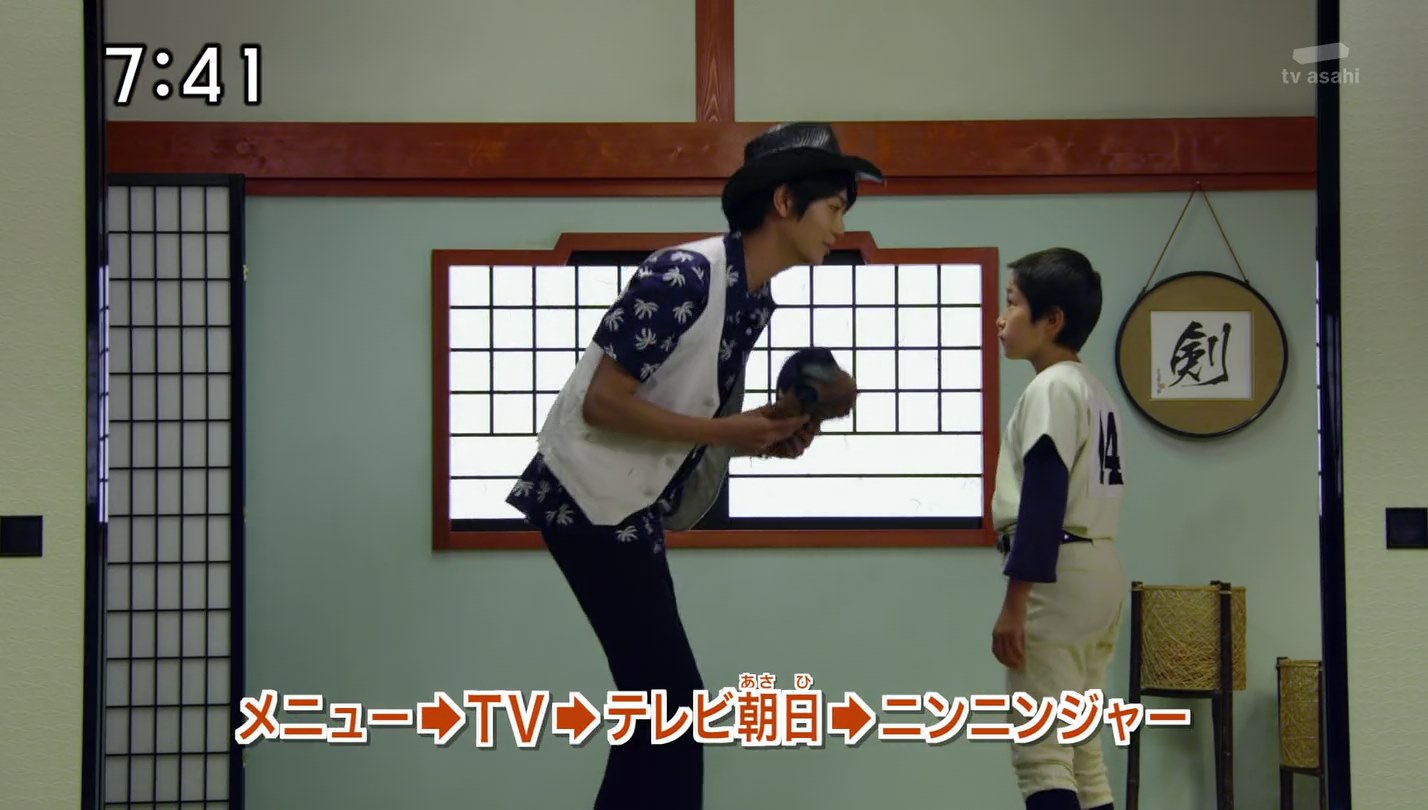 In the meantime, the Ninningers have brought Takaharu and the little boy back to the dojomanse. Takaharu is in just his boxers and tells everyone he’s looking for a new job.

Kinji tries to encourage the little boy who insists he doesn’t care about baseball anymore.

Takaharu says he’s found the perfect job in the paper: no experience needed for guys who are muscular and don’t think. 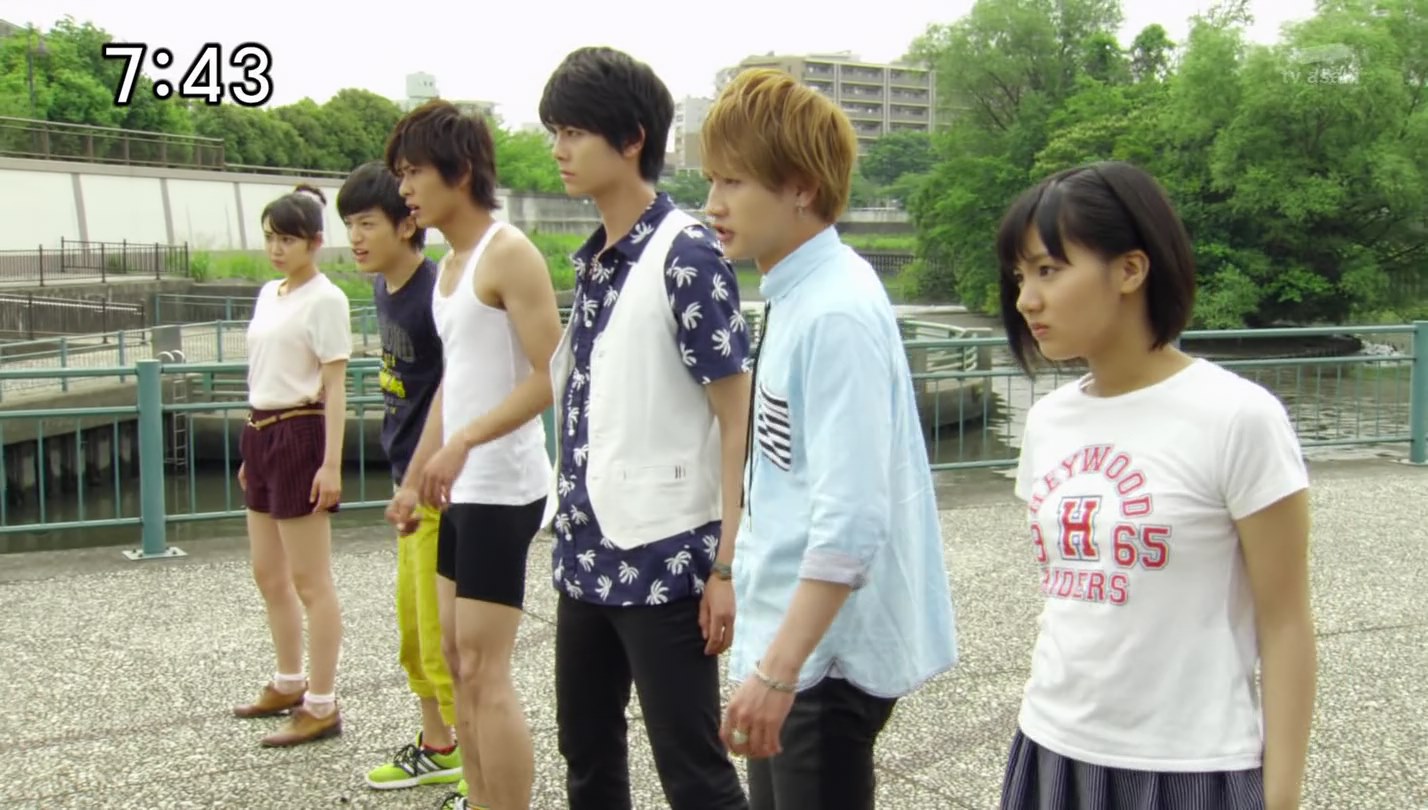 But Kinji is determined to stop the Youkai from taking people’s dreams. He won’t stand for it. The others follow him with Nagi and Fuuka dragging Takaharu along.

They find Baku and henge. Except Takharu who says he doesn’t have to henge to fight.

Baku decides to use Takaharu’s dream to give the Jukkarage some ninja powers. They fight and easily take care of the Jukkarages.

Kinji has an idea. Seeing as how Baku uses the eaten dreams to battle, they get the Youkai to challenge them to baseball instead. Kinji hopes they can retrieve the boy’s baseball dream this way too.

Baku takes them to a baseball stadium.

Takaharu is excited about baseball. Yakumo waves his wand and gives him a uniform.

They start the game and it is clear early on that anything goes as Baku uses Youkai tricks to score. The Ninningers decide to fight fire with fire and use Ninjutsu as well.

But at the top of the 9th, Kibaoni Army is up 5 to 2. Full count. Bases loaded. Kinji, who has been pitching all game, decides to have the boy, Kitabeppu, take the mound instead.

Kinji persuades Kitabeppu to just give it a try and maybe his dream will return. Kinji says people with dreams are the strongest. Kitabeppu heads to the mound and manages to strike out Baku.

It’s the Ninningers’ turn. Bottom of the 9th. Bases loaded once again.

Takaharu is at the plate and the others tell him to henge and finish this.

Takaharu manages to hit a grand slam and everyone is zapped back to reality. Takaharu and Kitabeppu start feeling a little better.

Takaharu goes Chozetsu and the Ninningers quickly finish off Baku. That returns the dreams to Takaharu and Kitabeppu.

Ariake no Kata can’t believe this absurdity. She orders Masakage to do something so he signals Kyuuemon to embiggen Baku.

The Ninningers hop into ShurikenJin and Bison King.

Baku uses his dream-eating beam to take all the Ninningers’ dreams this time. Kinji attacks Baku and the dreams fly out of him and into balls which land at Kitabeppu’s feet. He pitches the red ball back to the Ninningers and Takaharu snaps out of it to summon Lion Ha-Oh Castle. 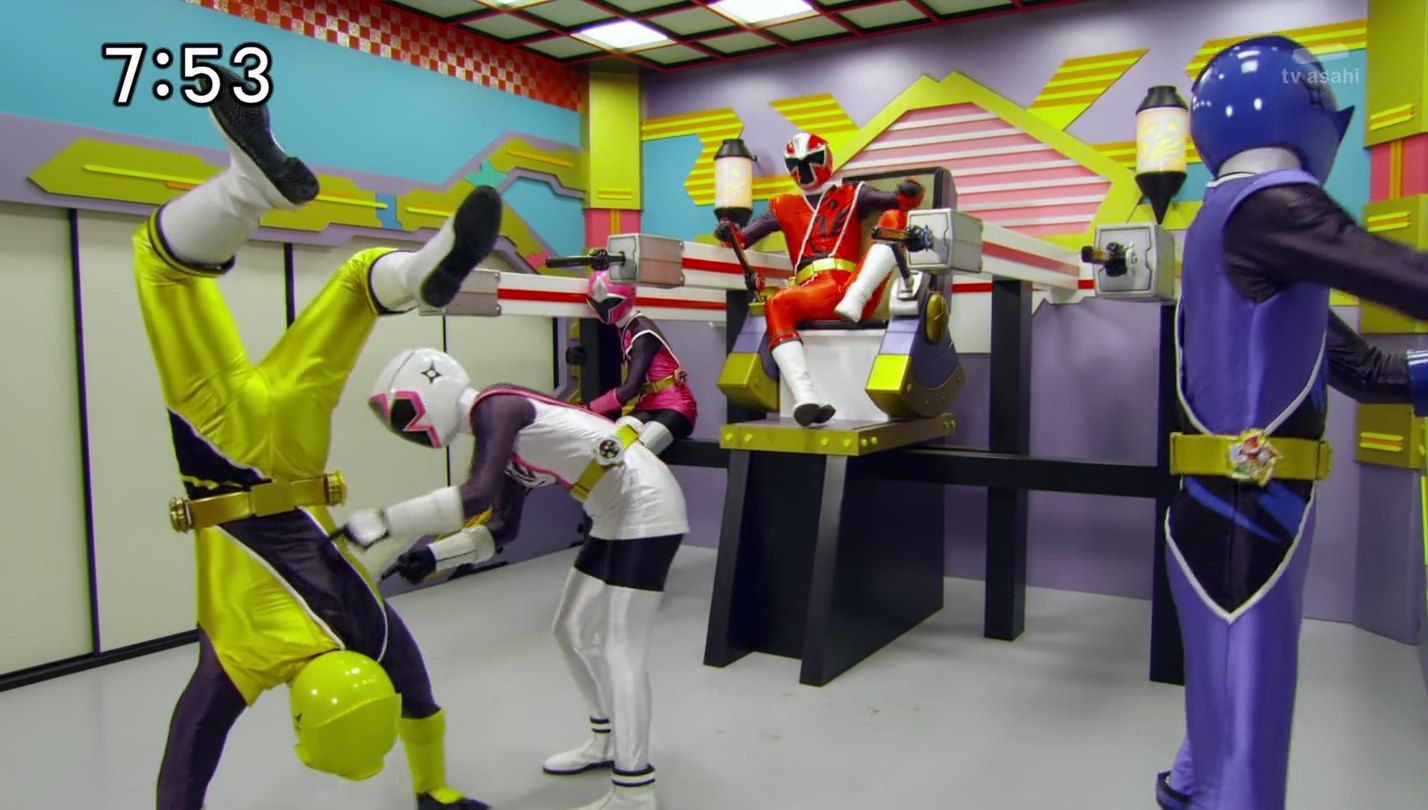 Takaharu jumps into Lion Ha-Oh and manages to block the dream-eating beam and deflect it back to Baku. That allows him to use a Lion Transcendental Slash to finish Baku off.

Everyone is back to normal.

Kinji and Kitabeppu motivate each other to follow their dreams.

Takaharu says they fight for their dreams, but also fight to protect everyone else’s too.

A solid episode. Maybe filler, but it was fun enough. The baseball game was fun. And it was interesting to see Kinji still not be as ready to be in a team as one might expect. It’s good to point out and remind us that he’s taught himself everything he knows. So he may be a good fighter, but rough around the edges and not classically trained.

Ariake no Kata gives off a typical “wife” villain vibe. I hope there’s more to her, but I won’t be holding my breath.

Overall solid episode which I enjoyed.