Recap: Kamen Rider Drive, Episode 21 – What Can Be Said About the Unusual Dead?

Otta is telling the SID about five different murders happening almost simultaneously in different locations around the city. There doesn’t seem to be any monsters involved, but he’s been put on the case of one of the murders so he won’t be around for a while. Kyu excuses himself to go check on something at home.

Otta shows the rest of them a picture of a suspicious biker who was seen wandering near the scene. It’s Chase!

Shinnosuke and Kiriko show Gou and Belt-san the picture. Gou says his big bro and sis should wake up and realize Chase is nothing but a killing machine. He challenges Shin-niisan in a race to find Chase first. If Gou does, then he’ll crush him with mach speed.

Shinnosuke tells Gou to stop with the pointless bravado. None of this will make Kiriko feel any better. On the contrary, Gou says, he thinks this is what’s best for his big sister.

Gou leaves. Belt-san says he agrees with him. With Medic as the new Reaper, Belt-san fears Mashin Chaser’s programming has been corrupted even further to the point that it would be difficult to turn him back.

Shinnosuke can’t believe Belt-san would want the first Kamen Rider who fought with him during the Global Freeze be destroyed as easy as that.

Shinnosuke says he’s with Kiriko and wants to believe in Chase too. But if he really starts harming people, then Shinnosuke will have to take care of him. Kiriko says she understands.

The idols are by the water. Medic lies to Heart and says in addition to killing her reapers, the Kamen Riders were responsible for killing 072. Which is why it is time for Chase to finish them off for good. She’s given him some kind of upgrade and he is ready to finally defeat the Kamen Riders. Heart is excited.

But Brain wonders just what Medic is up to now.

Shinnosuke and Kiriko arrive and Chase henshins. The Heaviness strikes just as Gou jumps in.

Otta is excited to see the white Kamen Rider. But Shinnosuke also henshins and Otta sees there are indeed two.

Gou goes Dead Heat, but Chase sends out a blast of Heaviness that affects Gou anyway. Chase uses Chaser Spider to knock Gou around. Kiriko comes running and aims her gun at Chase just as he approaches Gou for a final strike. 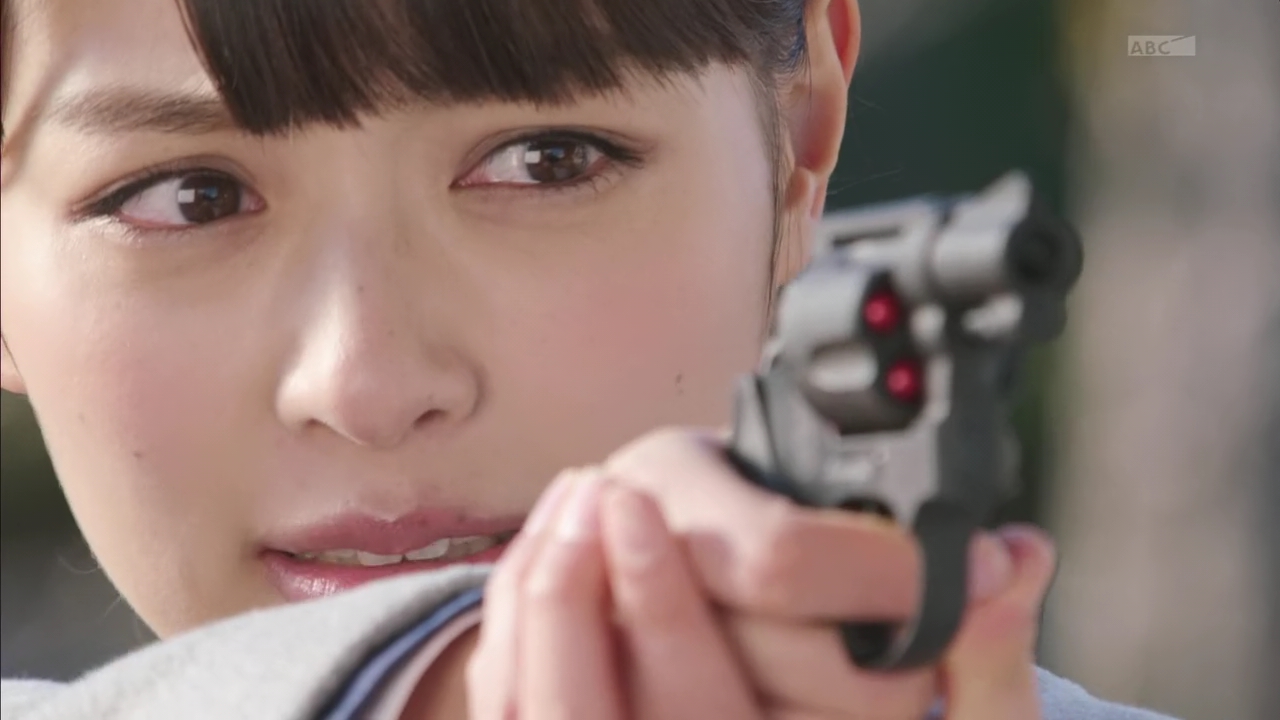 Kiriko is hesitating. She remembers Proto Drive saving her the night of the Global Freeze. She freezes right now as Chase gets ready to finish Gou off.

But Shinnosuke arrives already in Technic to stop Chase. Gou is reaching the danger level, so he downhenshins.

“Are you really hurting humans now?!” Shinnosuke asks Chase. He tries to get Chase to remember he was Proto Drive and how deep inside, he has the will to protect humans. Chase asserts that he only protects the Roidmude and will take any life necessary to do so.

She tells Chase to withdraw and he does. She jumps down and transforms into her evolved form to stop Shinnosuke and Gou from chasing after Chase. Three of her Reapers appear and fight them.

Medic uses her tentacle to modify one of her Reapers on the spot by giving him a gun for an arm.

Brain is watching from nearby. So Medic can modify and upgrade. Does that mean she’s done something to Chase’s body as well?

Medic leaves with two of her Reapers while the gun-armed one remains for Gou and Shinnosuke to easily take care of.

Back at the SID, Otta comes in with drawings of the FOUR Kamen Riders he believes exists. Anyway, Shinnosuke suddenly recognizes one of the murdered victims from the scene of the Bolt case. All these victims must be whom the Roidmude originally copied and are now being disposed of.

But how does that explain the simultaneous times of death? Gou asks.

Otta shows them a composite sketch of Chase and asks them to look for him in his place.

Gou takes the photo and approaches Shinnosuke saying he only thinks someone else killed these five because he doesn’t want to believe Chase did it.

Chief Jun says they have no evidence though. That is, until Kyu comes running in. He explains that he’s found a way to track Roidmudes. Their spirit, their core, is able to scour the internet to search for suitable humans to copy. That’s why he found the trail of 072 while analyzing his blog. And that’s how he found the same data trail leading to these five murder victims.

It proves that the Roidmude had been tracking them.

Shinnosuke is happy they’ve now found another way to track the Roidmude using something other than Gravity Shift particles.

Shinnosuke and Kiriko head to the Pit to tell Belt-san who proposes they split the Shift Cars into five teams to investigate each of the victims’ situations.

As the Shift Cars fan out into the city, they are suddenly attacked. By Medic. She blows her purple breath onto them.

Meanwhile, Brain watches as Chase polishes his gun. “So it’s time?” Brain asks. Chase says this is indeed the time he will finally crush the Kamen Riders.

Brain offers to give him a little something-something to help.

Shinnosuke and Kiriko are in Tridoron and Belt-san says there’s an SOS from Justice Hunter. They hurry.

Meanwhile, Gou has found Chase. But Medic pops in and knocks Gou off his bike allowing Chase to drive off.

Heart appears as well and wants to have some fun. Gou decides to go Dead Heat. They fight.

Justice Hunter appears in front of Tridoron and they stop. But when Shinnosuke and Kiriko get out, Justice Hunter attacks them then leads them right into a trap.

The other Shift Cars appear and Belt-san sees they are being controlled. Chase appears and says this was all planned by Medic to allow them to settle things once and for all. Medic admits to Gou that those dead bodies were used as bait knowing that the Shift Cars would be split up to investigate.

Heart says cutting Shinnosuke off from the Shift Cars will allow Chase to deal the final blow.

Chase henshins and unleashes a Gravity Shift. He sets Burning Solar to finish them off, but Shift Wild and Shift Technic arrive to free Shinnosuke and Kiriko from the Heaviness.

Shinnosuke henshins directly to Wild and he and Chase fight. 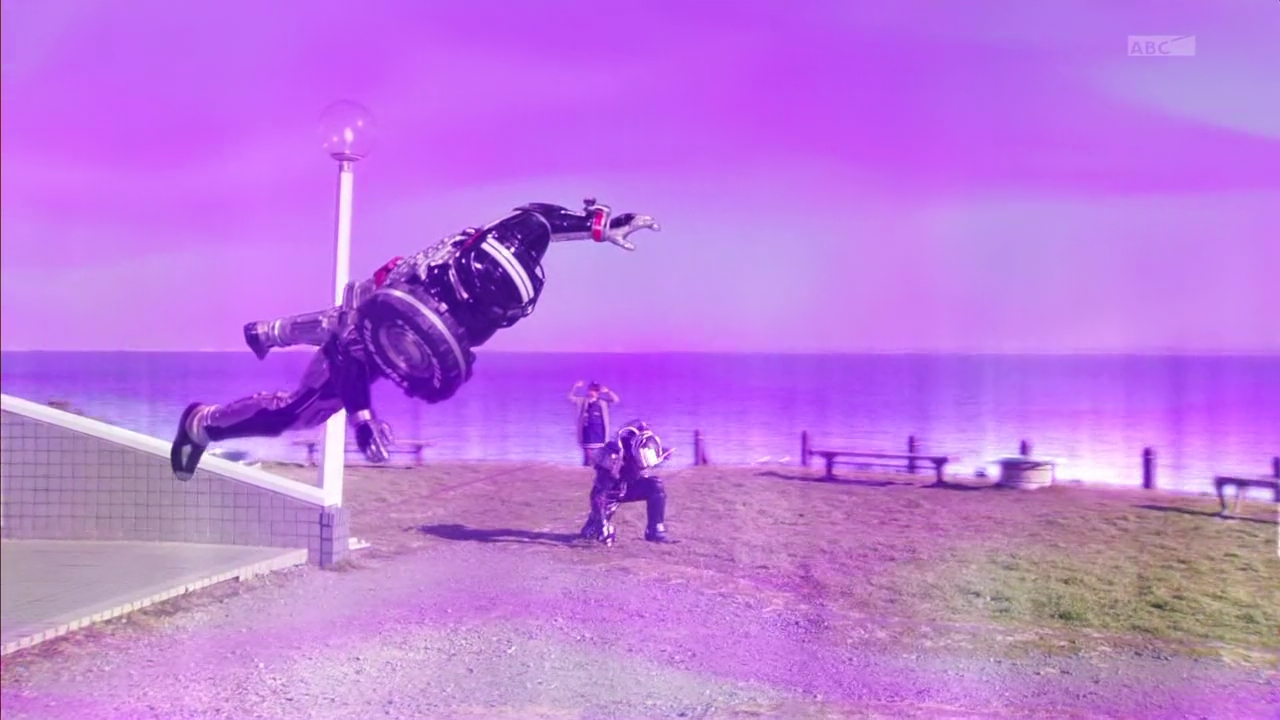 Suddenly, Chase uses his Break Gunner to initiate a new power. He slams the ground and a strange energy field envelops them. Gou sees the strange light.

Shinnosuke finds he can’t even move. Belt-san says this is a pressure even greater than a Gravity Shift.

“This eternal silence… is a world known only to the two of us. That is, until the moment I end your life!”

Dead Heat manages to help Shinnosuke move a little more freely, though still heavy. Chase tosses and shoots at Shinnosuke. He then inserts Chaser Spider to deliver a final blow.

But Shinnosuke calls out. “Have you really become a murderous machine? You once saved Kiriko’s life! Don’t you care that she’ll die too?!”

Chase begins twitching with his head pains, but fights it, pointing his Break Gunner back at Shinnosuke.

Belt-san says this is do or die. It’s time for the new Shift Car that he’s kept hidden from Shinnosuke. There are no other options left, however using it without training is even more dangerous than Dead Heat!

Belt-san sees Shinnosuke is in top gear. Chase uses Chaser Bat and Chaser Cobra for a Triple Tune. He shoots at Shinnosuke with the Shift Cars adding extra punches.

But emerging from the huge fireball…

Pretty good episode. I enjoyed it. Though I think we’ve been promised the decisive battle between Drive and Chase almost every week. lol

At the same time, it’s a typical build up to another power-up which is fine. Whether or not we see any movement on the story front, we’ll see next week.

The most interesting thing for me this episode though was when Kiriko actually hesitated to shoot Chase (which wouldn’t have even left a scratch on him anyway) instead of saving her BROTHER? Wow! Right? Like, she can be head over heels in love with Chase or whatever, but we’ve seen that her relationship with Gou should trump that easily. Regardless of Chase being her rain-soaked Knight.

That scene really stood out to me. I don’t know if it was poor writing, disregarding the characters for a “dramatic” moment or are the really implying the usually awesome Kiriko would think twice about saving her little brother. (They’re all each other has, right?)

I wouldn’t be surprised if it was the latter because after the first few weeks of Gou’s introduction, the show’s been very focused on planting the seeds for Chase’s “redemption” arc and it’s mainly been Kiriko doing the planting with Shinnosuke joining in after last week and 072. At the same time, making Gou out to be the cocky, heartless hothead who doesn’t want to give poor Chase a chance.

On the flipside, the idols always hanging out in dark places can get very amusing. Especially with scenes like Brain sending a thrill up Chase’s body in a romantic candlelit room. What’s the target audience again? lol