Misti & Jim are happy to have The Save. Tim & Te Jay and Kym & Alli share a taxi to the airport. Brooke & Robbie are glad they were able to show they weren’t dumb wrestlers. Amy & Maya give Bethany a pair of shoes after she lost one of them in the last Leg. These are the six teams on the first flight. 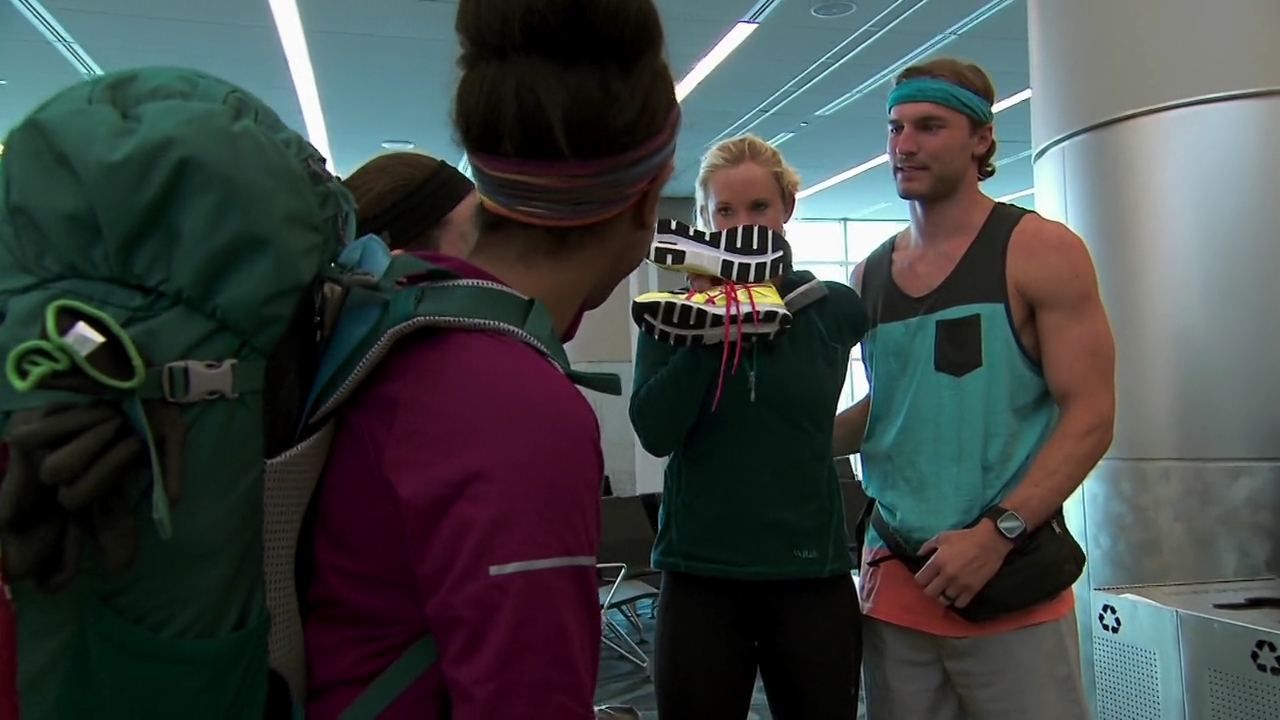 On the 2nd flight are Dennis & Isabelle, Shelley & Nici and the penaltied Keith & Whitney and Michael & Scott

Once in London, teams must receive their next clue at the Tower Bridge from the Pearly King and Queen.

And that clue reveals the Detour.
In About Face, teams will join the Queen’s guard at Somerset House and perform a traditional changing of the guard. After dressing up, they will choose a drill instructor who will teach them the intricate series of steps they must perform while following commands.
In Pancake Race, teams will dress up as chefs and cook a perfect pancake which they will then flip in the pan as they run one lap around a race course at Victoria Gardens in under 1 minute and 15 seconds and without dropping it. 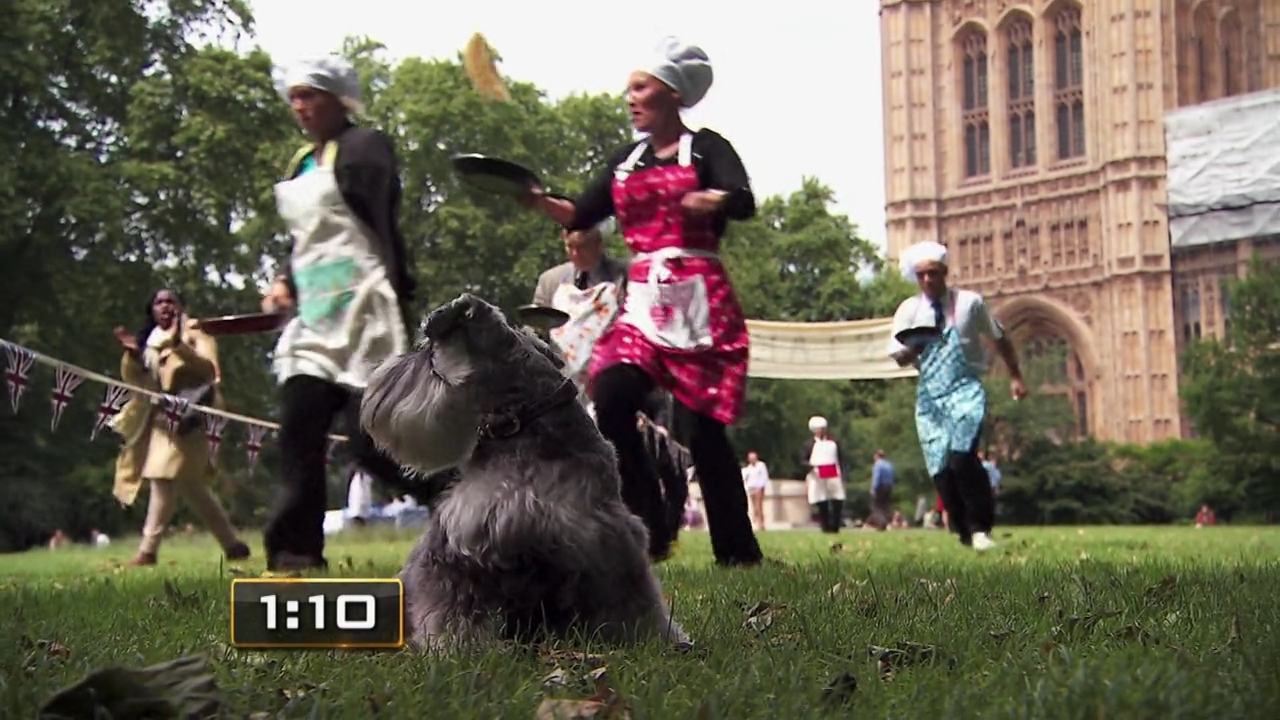 While the new guards start their training, Adam & Bethany quickly get the thumbs up on their pancakes before they join in the race and easily reach the finish line where they are given the next clue.

After the Detour, teams must hop on a train at Paddington Station to Oxford where they will find the next clue under Magdalen Bridge.

Over at About Face, Misti & Jim and Kym & Alli give the performance a try, but they fail their first attempt and get a scolding from the commander.

The last group of teams arrive in London and head to the Tower Bridge. With their military experience, Shelley & Nici choose About Face. Keith & Whitney, Dennis & Isabelle and Michael & Scott choose pancakes.

Misti & Jim and Kym & Alli go for their 2nd attempts and are approved by the strict commander. Kym thanks him with a surprise kiss. The remaining first flight teams begin feeling the pressure when Shelley & Nici arrive.

At the pancakes, Keith & Whitney head onto the race course first, but they aren’t able to finish before the time is up so now they have to start over. Michael & Scott’s pancakes don’t even pass inspection, while Dennis & Isabelle give it a go.

Back at Somerset House, Tim & Te Jay and Brooke & Robbie only anger the commander, so they have to go again. Shelley & Nici fail their first attempt too, but they feel them being superfans who have watched and followed Phil for 14 years should help them get ahead of the other teams who are not as “superfanny” as they are. 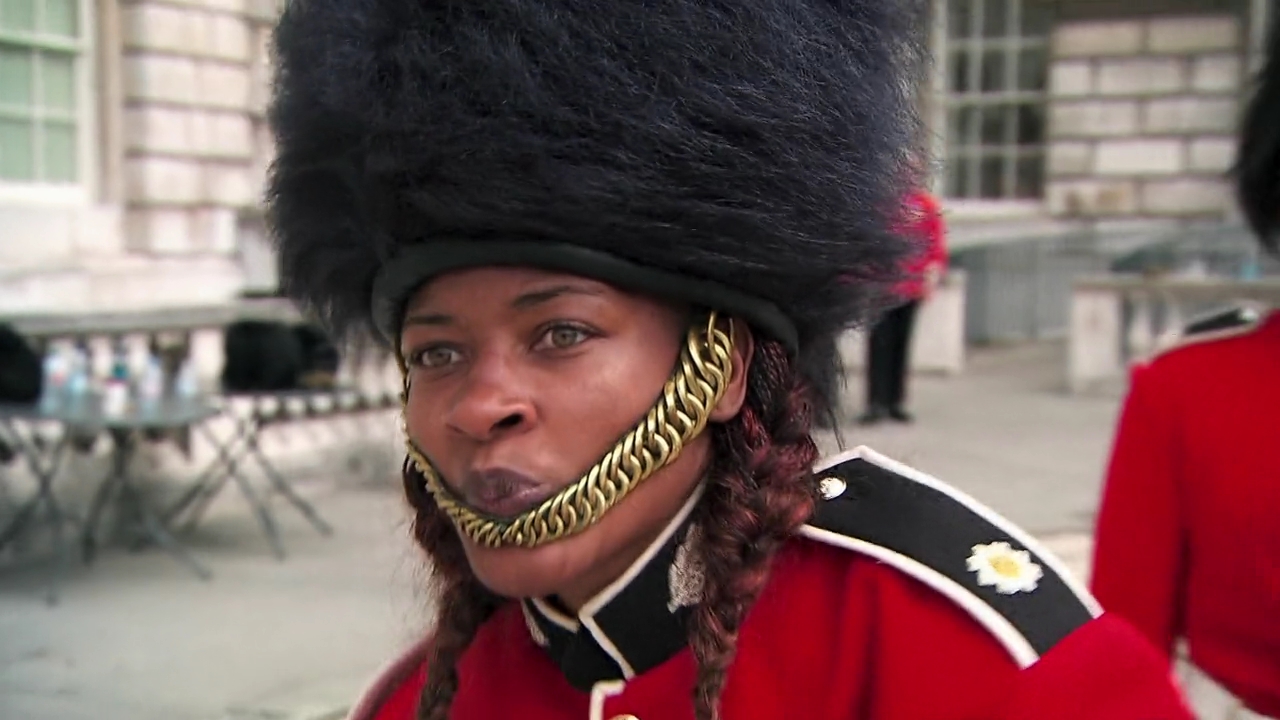 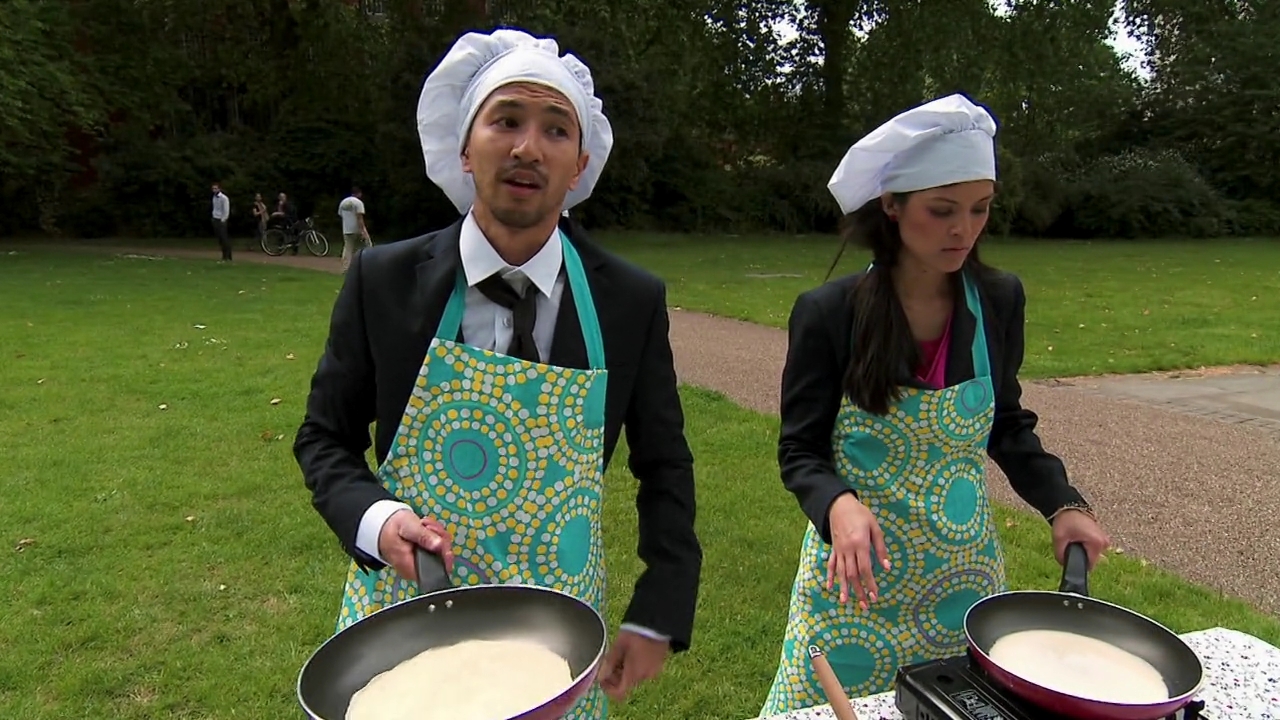 But Dennis & Isabelle, who get started on their first pancake run, are also superfans who have watched every episode, studied every team’s strategy and even joined archery and Crossfit just to prepare for the Race.

They don’t finish before the time is up and Keith laughs to which Whitney says to “Be nice.”

Tim & Te Jay, Amy & Maya and Shelley & Nici get approved on their 2nd attempts, leaving Brooke & Robbie the last ones at that side of the Detour. Keith & Whitney get the next clue, leaving Dennis & Isabelle and Michael & Scott.

Over in Oxford, Adam & Bethany run by Phil as they get the next clue telling teams to punt.

One team member will propel the boat, known as a punt by standing on the flat Cambridge end while the other stands on the opposite Oxford end. Once teams have made one lap around Magdalen College Island, they will receive the next clue. 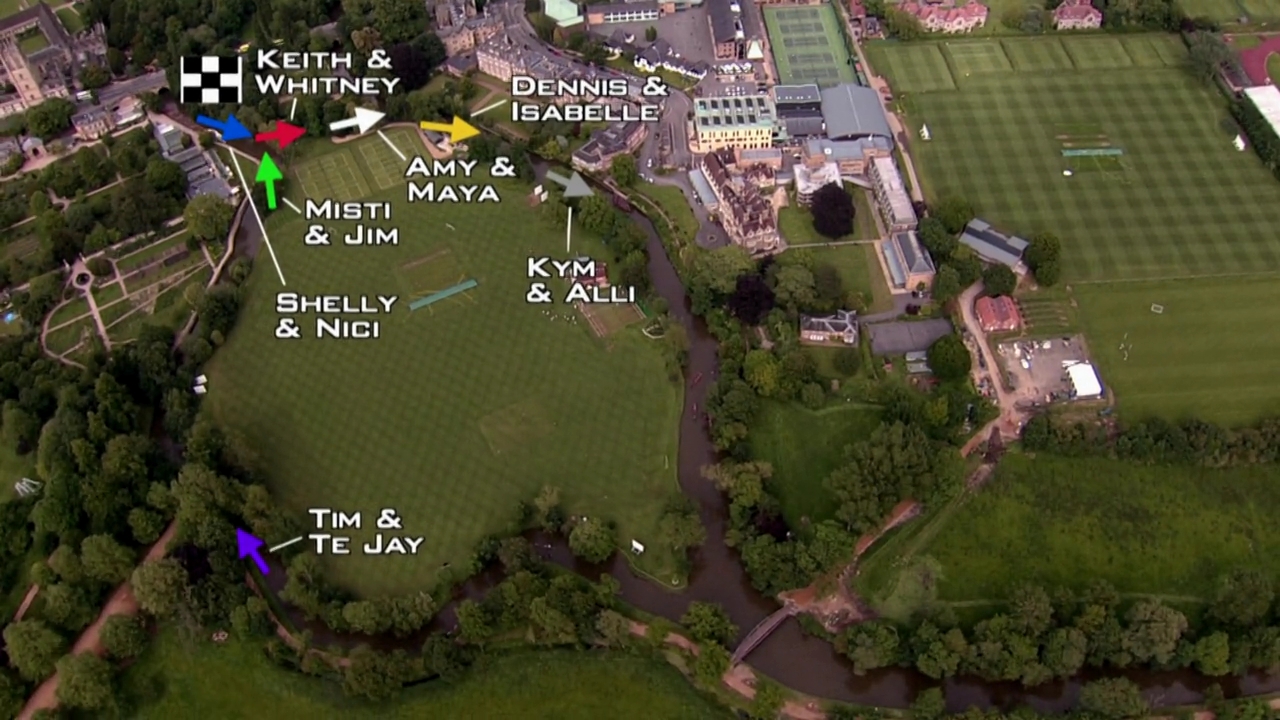 At the punting, Adam & Bethany are still in the lead. They must now make their way to Christ Church College where they will “tip their bowler” to find their next clue inside.

Misti & Jim arrive at the dock, but they are told by the punting master that they have been doing it wrong and backwards with the punter on the wrong end. So they must head back and start over, as do Kym & Alli who are right behind them.

But the next group of teams have just arrived and it is so crowded, Misti & Jim bump into Keith & Whitney’s punt making Whitney fall into the water.

At Christ Church College, Adam & Bethany are given a bowler hat and an umbrella. And inside the umbrella, they are given the opportunity to search for the Express Pass at The Bear Inn or to head to the Pit Stop.

Adam & Bethany decide to go for the Express Pass. Once they have it safely in their possession, they realize their clue is inside their hat: Churchill’s Birthplace. Teams must figure out that is Blenheim Palace.

Misti & Jim and Kym & Alli are close behind. 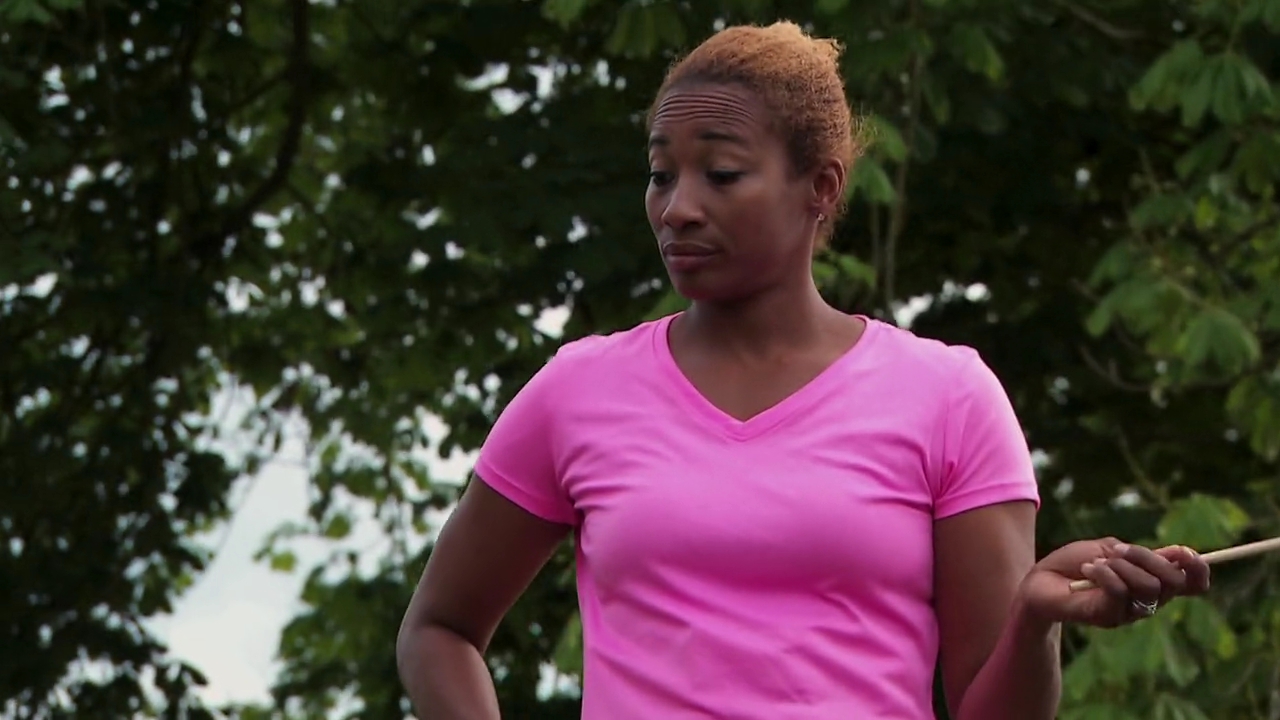 At the punting, Keith & Whitney finish next while formerly last place Michael & Scott have now passed a few other teams who are struggling. Several other teams fall in the water while Nici decides to pee over the side of the boat, much to the enjoyment of the English locals.

At Blenheim Palace, Adam & Bethany step on the Mat and Phil officially checks them in as Team #1. They win a trip for 2 to Sweden.

Brooke & Robbie pass Dennis & Isabelle who have no idea how to navigate the current. Michael & Scott arrive on the Mat in 6th while the wrestlers run past Amy & Maya to finish 7th and 8th, respectively. 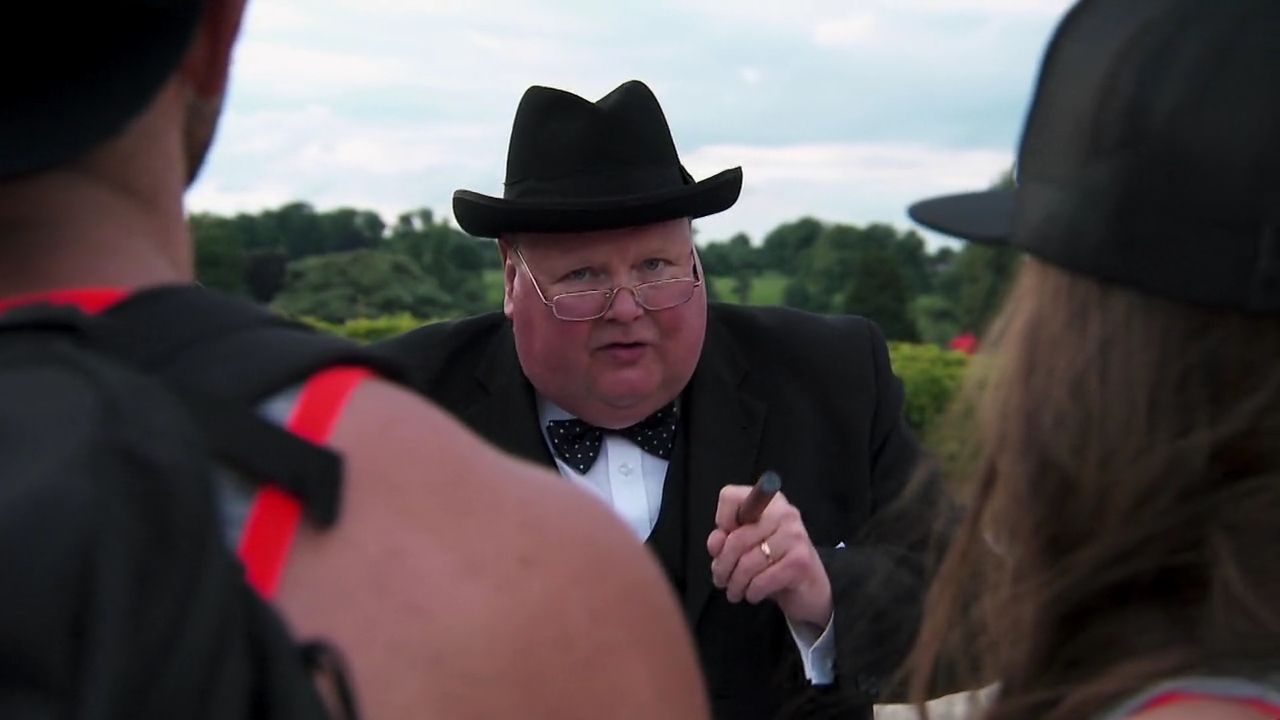 That leaves the two superfan teams who are struggling mightily. Shelley and a frustrated and in tears Nici finish the punting in 9th with Dennis & Isabelle now in last place.

It’s a mad dash to the Pit Stop. Shelley has a cramp in her Leg, but a crying Nici implores her mother to run. Isabelle also starts to cry and both teams are in tears as they hop into taxis. 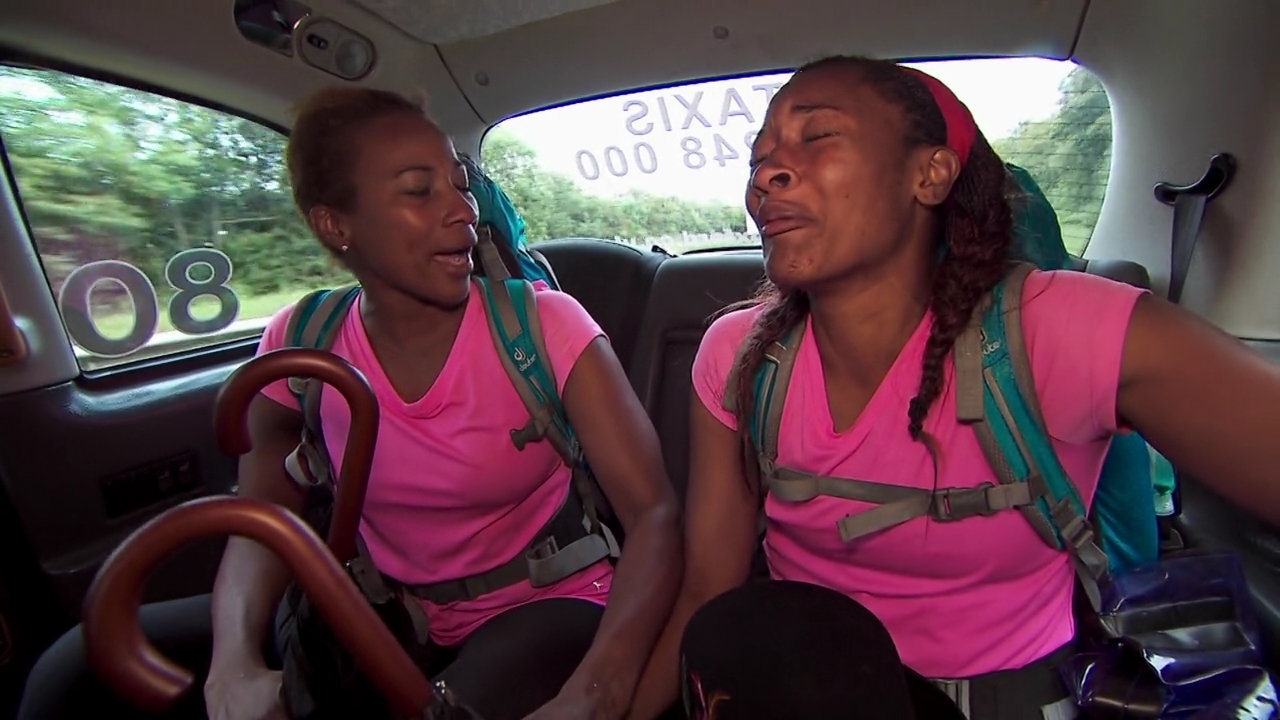 Shelley & Nici manage to get to the Mat in 9th place and are more than relieved to still be in the Race.

Dennis tries to comfort a very distraught Isabelle as Phil tells them they are last and eliminated. 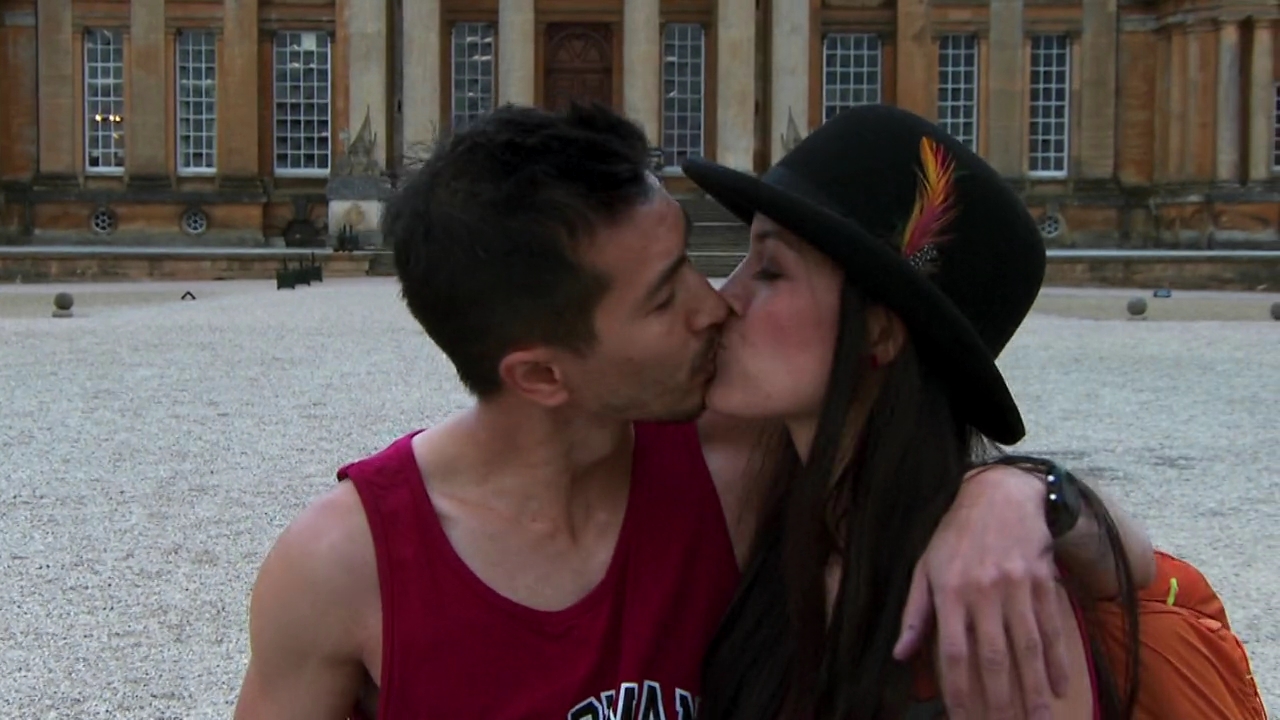 Oh. Well that was an abrupt end to the Leg.

It was great to be in London for a full Leg. But I wish they did more than just a Detour. The Detour took up half the episode, yet at the same time we barely got to enjoy either the grumpy commander or running around with pancakes as much as we should have. It actually felt really odd.

The best part of the episode was the epic crying at the end and the incredible drama of a foot and taxi Race to the Pit Stop. First, I have never seen anyone break down as much as Nici did in this episode. Not even Rachel’s fun and good-ness. Also, TAR24 had no such Pit Stop drama. But that abrupt end with Dennis & Isabelle and the abrupt cuts during the episode the abrupt cut to commercial while Michael & Scott were at the Detour all felt really off.

It was an okay Leg, but something about the episode itself. Throw in Phil appearing on the race course again (and in a less natural way than the first leg) and it was just weird all around. And are they seriously not going to show Phil telling teams what place they are? No official check-ins? No no no.

“Winston Churchill” was fun though.

The Express Pass “detour” is pretty much what I had in mind when I came up with the mechanics of a Roundabout. Getting the chance to earn an Express Pass or Fast Forward or other reward or continue on with the Race. Kinda disappointed that it was just them walking over to pick it up. And they still got a trip too.

Dennis & Isabelle are amazing. They may just be the worst 2nd boots ever. They had so much potential. Just look at these deleted scenes from Leg 1!

And here’s them in this Leg:

They were already pretty amazing on the show, providing most of the quotables these first two episodes. But if we got to see them acting like this on the show?! OMG, they would shoot right up to the top of my all-time faves list. Like, seriously. Superfans of the Race AND determined to compete AND can bring some hilariously fun drama. What’s not to like? So this elimination is the worst for me in a long time. So sad. Ugh. I think that’s why I’m not so hot on this episode, to be honest. lol

Tim & Te Jay got less screen time in this episode, but they still delivered in the short scenes we did get of them. They’ve shown they are very competitive. Which is awesome. And of course, they’re still having fun too.

Shelley & Nici! With no more Dennis & Isabelle, I hope Shelley & Nici carry the superfan flag much longer. Nici’s breakdown at the end was absolutely epic. She totally topped any of Rachel’s epic meltdowns. And I love Rachel. But Nici peeing in the water?! Move over Tyson! lol They’re great. I am definitely hoping they go very, very far in the Race, if not to the end.

Brooke & Robbie have been the comeback kids these first two Legs. That bodes well for them. But I definitely want to see them stepping it up Race-wise. There will come a time when they may not be able to catch up. Amy & Maya were almost invisible this Leg, which is unfortunate. What little bits we saw of them too were great. They’re like your spunky little kid sister who wants to play. That makes them very endearing and rootable to me.

Kym & Alli are definitely coming into their own with this Leg. They are fierce Racers, but also capable of some hilarious fun, like Kym kissing the commander. Adam & Bethany are falling into the boring couple slot, which I’m sad about. But at least they’re not turning her into a sob story like a certain team from the past.

Misti & Jim were just meh this Leg. Whitney is much more likeable than Keith is. And Michael & Scott overtaking everyone just annoyed me. (Dennis & Isabelle doe!!!!! ='( )

Isabelle: “We’ve been basically studying for The Amazing Race, as if this is like the final exam for life.”

Commander: “Don’t collapse on my square. Be gone! Get away!”

Dennis: “Honey! You can’t say switch when I just fell into a thorn.”
Isabelle: “A million dollars hurts.”

They’re back!
Over 500 HD Episode Caps from this episode are now available at
photobucket/xangatheamazingracecaps3