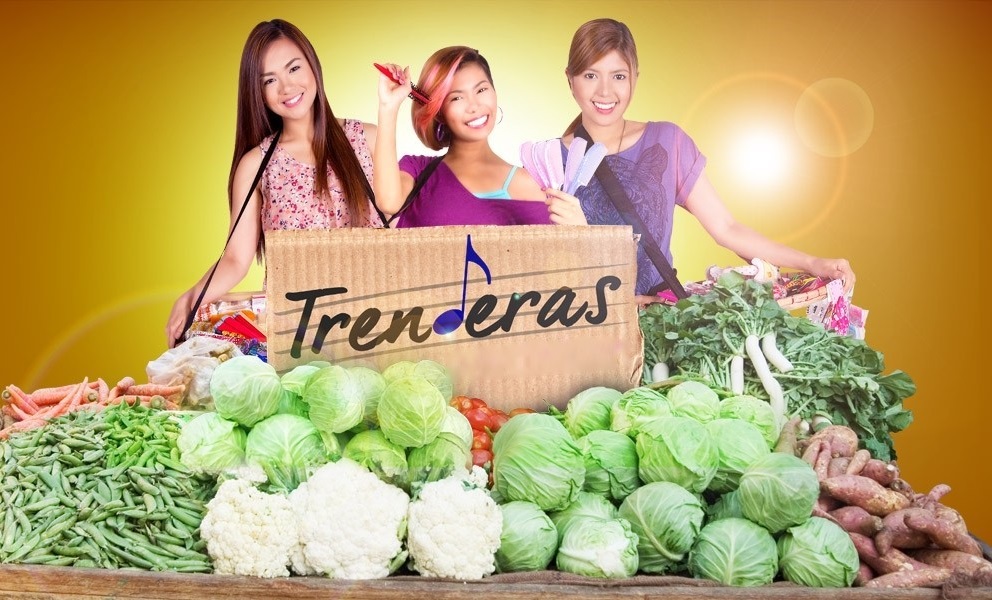 After the excellent Beki Boxer and the unique thriller Jasmine, TV5 presents another fresh television offering with the musical series Trenderas.

Starring Isabelle de Leon, Katrina Velarde and Lara Maigue, Trenderas tells the story of three young, talented singers and best friends in their quest to become the Philippines’ next singing stars. The title, a portmanteau of the words “Trending” and “Tinderas” explains their humble beginnings as palangke vendors who apparently hit it big when a performance of theirs goes viral.

But that’s to be revealed later. The pilot episode introduces us to our eclectic mix of main and supporting characters through the blending of musical performances and flashbacks during the auditions of the fictional Pinoy Pop Icon reality-singing competition where the three friends (now rivals) are vying for one spot on the live shows.

The interesting mix in the pilot is one of the reasons Trenderas is fresh and exciting. But it is also one of the reasons it had trouble even making it to air, as well as a likely hindrance to it connecting to the Filipino audience.

While announced months ago, showbiz tsismis columns reported TV5’s struggle in finding a way to market and promote the series. And after seeing the pilot episode, one can see why. It has become ever more apparent lately that Filipino audiences are averse to anything other than the same cookie-cutter formulas.

And Trenderas certainly sets itself apart from other scripted primetime offerings as well as previous attempts at musical dramas in the past. From remakes of classic films like Bituing Walang Ningning to the standard rags-to-riches tales of GMA’s Diva and Biritera or the disaster that was ABS-CBN’s 1DOL, music-infused Filipino dramas have been a subpar-leaning mixed bag.

Based on its first episode at least, Trenderas is something much fresher than any of the recent musical attempts on Philippine TV. Pluses include its excellent and talented cast and, maybe more importantly, an indie film sensibility in its visuals and presentation which give it a raw feel as opposed to forced polish and melodrama. In fact, the premise might even work the best as a feature film.

Though originally developed as a daily teleserye, its eventual and current incarnation as a one-hour weekly drama may suit the story just as well. And is another aspect that separates it from the rest of the pack.

Trenderas has a lot of charm and the musical performances were cleverly used in the first episode to introduce us to our main characters. As both part of the episode’s plot and as an almost expository soundtrack, the songs chosen and performed felt organic and natural instead of random and contrived.

There’s no doubt Isabella de Leon, Katrina Velarde and Lara Maigue as the title characters are amazingly talented singers. And their chemistry is immediately evident thanks to contrasting scenes of the current tension between them and the flashbacks to happier times.

The trio of Kitkat, K Brosas and Cacai Bautista cannot go unmentioned either. These three scene stealers have already proven over the years that they are both talented comediennes and singers. And they are absolutely put to good use here, letting them do what they do best; wowing you with their vocals and making you laugh with their quips. Their short face-offs with our three Trenderas in the episode actually help develop our title characters even more while still being absolutely hilarious on their own.

Trenderas‘ indie sensibility, creative set-up, genuinely toe-tapping musical numbers and talented cast are all qualities that make it deserving of success. Unfortunately, a lot of that may also be reasons why the mainstream Filipino audience may be unable to connect with it.

But that doesn’t take away from Trenderas‘ legitimate potential that can hopefully be fully realized even if it doesn’t necessarily translate to ratings success.

Good Ol’ Review: ENA’s Fun and Engaging “Unlock My Boss” Has a Lot of Heart