Medusa calls Sora “Gremlin,” but says she won’t trust him until he does “the work.”

Rinko is already back at work, getting the bad guys to confess to their crimes. An older woman arrives at the station hoping for help.

Across town, Haruto and Shunpei are at the donut cart when they see Kosuke primping. He says he’s waiting for Rinko who called him to meet and he’s happily excited for what he thinks is a date.

Rinko arrives… with his grandmother.

Haruto, Shunpei and Rinko listen in as Kosuke and his Granny talk. Apparently, he’s actually a rich boy. She asks why she didn’t even hear from him after returning from the ruins. And what about college? She tells him to return home. Shunpei tries to tell her about Kosuke being a mage, but he stops him.

Granny is pretty strict, so Kosuke can’t tell her about needing to devour Phantoms so he won’t die. Instead, he runs for it. Haruto and Rinko chase after him with Shunpei left behind to take care of Granny.

Medusa meets with the Phantom, Weretiger about a new Gate she’s found.

Shunpei takes Granny sightseeing, but apologizes for troubling him all because of Kosuke. She gives him a little frog charm to help him return safely from travels. Suddenly, Weretiger appears in front of them, pointing at Granny being a Gate.

Shunpei tries to protect Granny until the others arrive, but gets thrown aside. Haruto henshins and Kosuke goes into position to as well, but stops himself.

Haruto’s having trouble just as Weretiger summons Ghouls, so Kosuke runs up the stairs out of sight to quietly henshin.

Kosuke jumps back down to save Shunpei, Rinko and Granny from the Ghouls and turns his attention to Weretiger. But he realizes Granny might recognize his voice.

So he decides to pretend he’s a girl.

He fights Weretiger as a female Kamen Rider Beast. And when Haruto joins in, the Phantom retreats.

Haruto dehenshins and rejoins the others while Kosuke says bye and skips away. This is all very amusing for Sora. 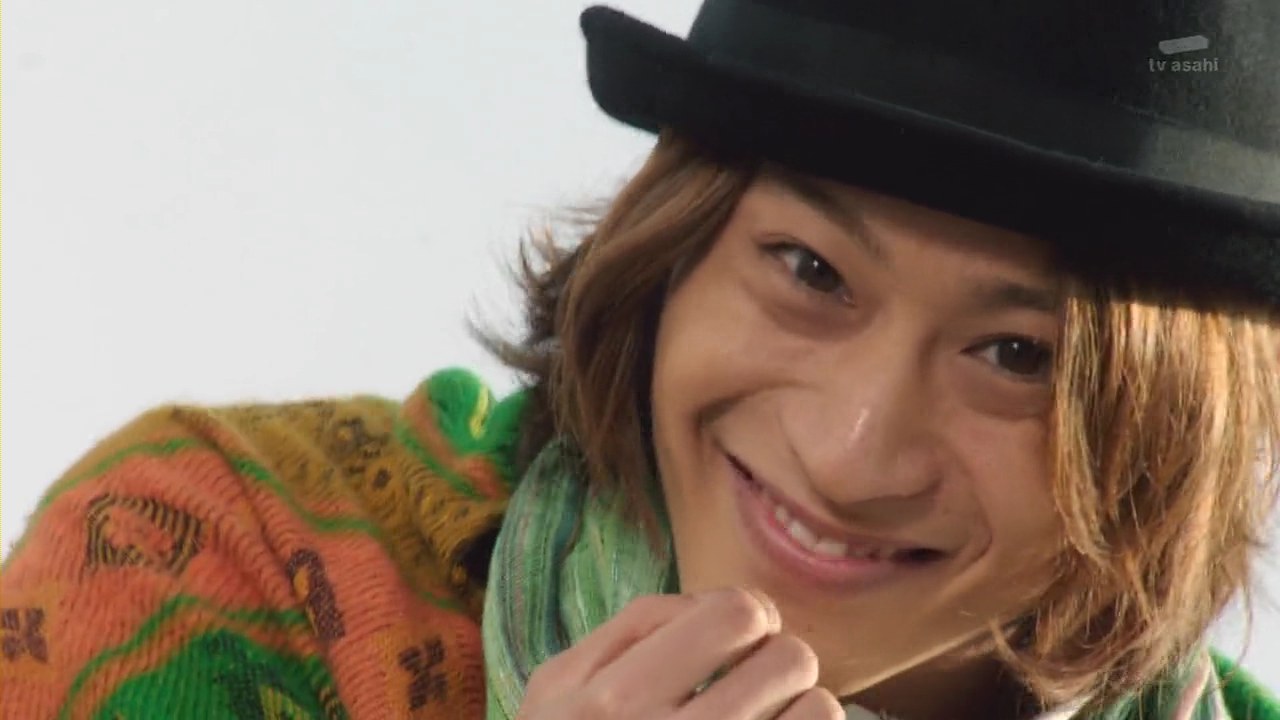 They take Granny back to the shop and explain everything, except that Kosuke is Kamen Rider Beast. He shuffles Wajima away before he can mention it and tries to take Koyomi shopping when Granny thinks she’s the magical girl beast.

How obnoxious, Granny says. She tells him to calm down, but he says none of this would’ve happened if she had just stayed in Fukui instead of coming to Toyko.

I’ll return as long as you’re with me, she replies.

That evening, Kosuke is at his camp eating a cup of noodles alone. Haruto comes and says he should’ve eaten with them. Back at the shop, Shunpei gives Granny a massage. She apologizes for bothering him again, but he says it’s okay. He’s a grandma’s boy and was always spoiled by his own granny before she passed away when he was in middle school.

Must be nice to have a loving grandson, she says, because Kosuke doesn’t even like her.

Kosuke tells Haruto about Granny being against everything he did as a kid, including wanting to be an archaeologist.

He was such a reckless kid, she tells Shunpei, that she couldn’t help but be strict. It’s only natural he’d distance himself from her.

Not so, Shunpei says. Kosuke only wants he to return to Fukui for her own safety and besides he already save… er, in any case, Kosuke probably doesn’t hate her.

Kosuke asks Haruto see Granny off for him.

Meanwhile, Sora meets Weretiger who is stumped at how to drive Granny the Gate to despair. Sora tells him about Beast not wanting her to know he’s a mage.

Next morning, Haruto and Shunpei are accompanying Granny to the station. Shunpei says Kosuke should’ve at least said goodbye and Granny says she doesn’t expect it from him and thinks they’re more reliable anyway. 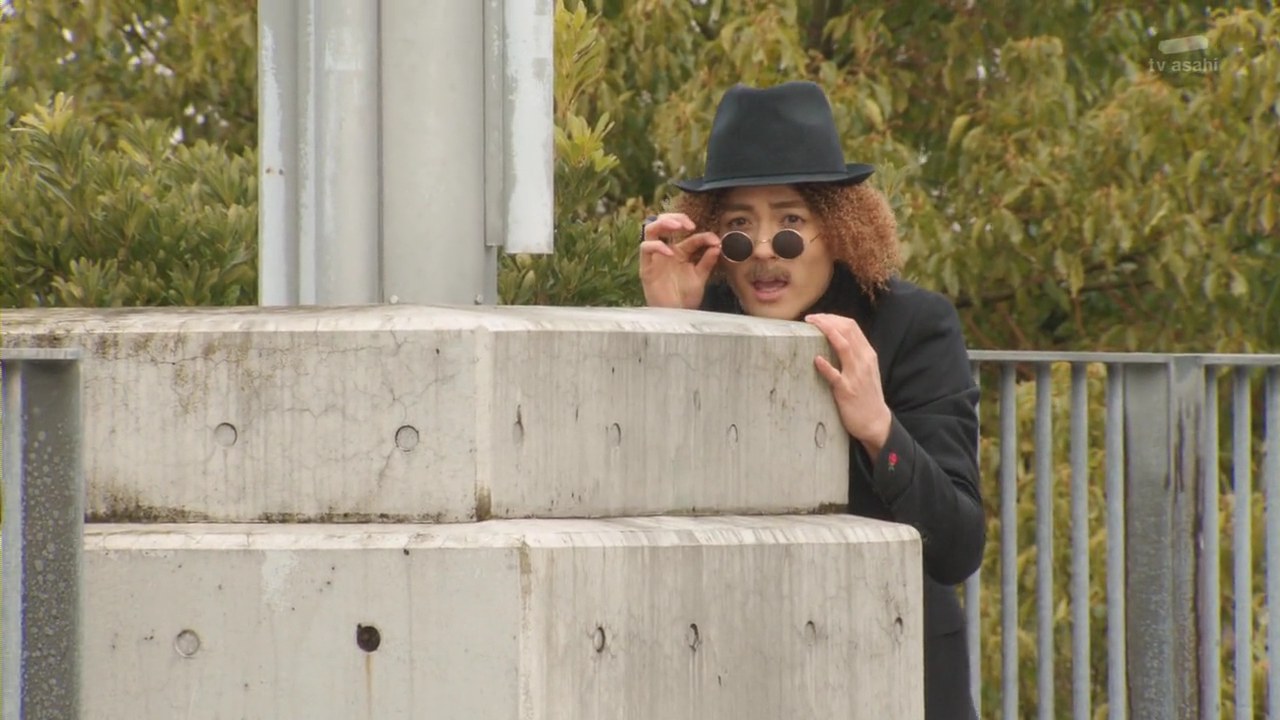 But Kosuke, in a full disguise, follows them.

They get on the bus to the station, but the driver closes the doors before Haruto can get on. Shunpei tells the driver, but it turns out to be the Phantom. Haruto tries to chase after it, but it’s no use.

Weretiger recklessly drives the bus and unleashes Ghouls in the bus. Shunpei takes out the frog charm Granny gave him and tries to fight them off, but just gets knocked back.

Kosuke just can’t sit and watch so he gets up and fights the Ghouls. His disguise gets knocked off and Granny sees him. 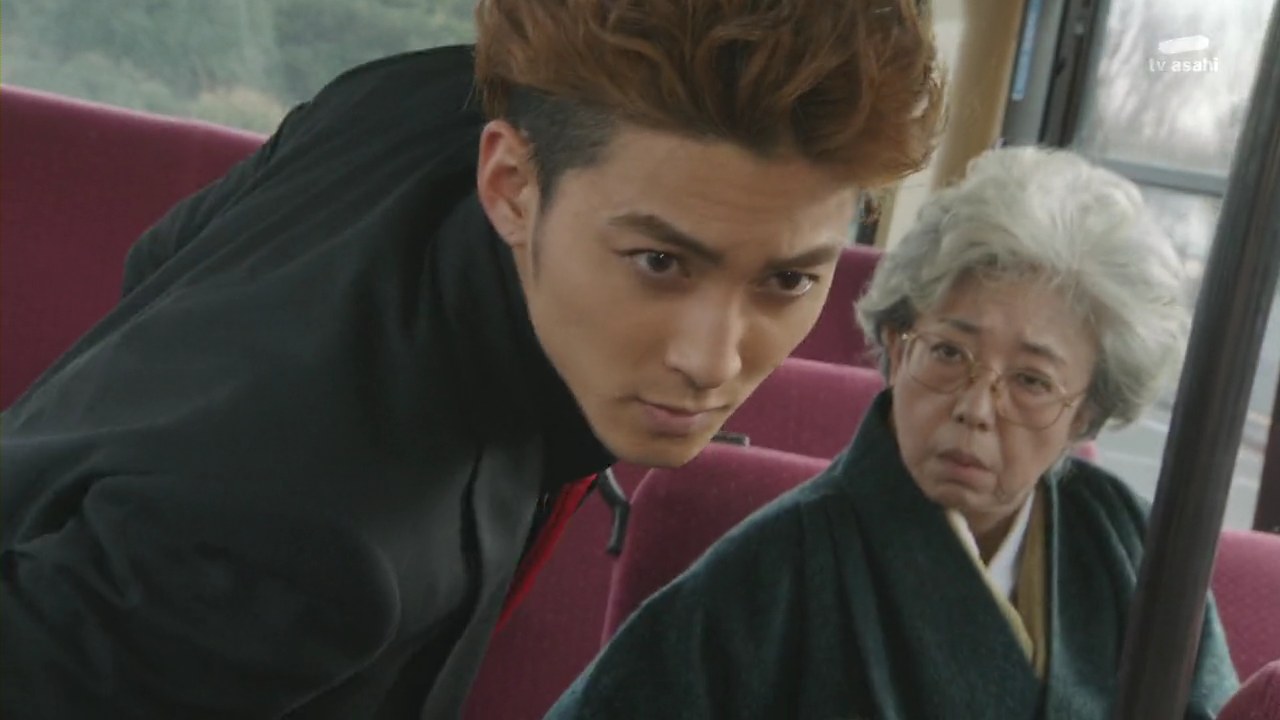 Nothing he can do now. He tells Granny to save the scolding for later and henshins.

He continues fighting off the Ghouls as Haruto catches up on his bike to stop the bus. The passengers hurry off the bus and Shunpei stays with Granny as they watch Haruto go Water and Kosuke use Chameleo.

After dispatching the Ghouls, they turn to Weretiger. But a quick shot from the Phantom causes Haruto and Kosuke’s rings to fly into the air switch. Kosuke tries using Haruto’s ring, but it won’t insert into his belt. Haruto scans Kosuke’s ring, but for him, it works.

Cool, can I have it, Haruto asks, but Kosuke takes out his Buffa ring instead and asks Haruto to let him eat the big meal today.

Upon hearing that, Granny recalls the Phantom’s words from earlier and realizes Kosuke is the mage that needs to devour Phantoms or die. She walks toward Weretiger.

Go ahead and drive me to despair, she says, I won’t run or hide.

Now that’s more like it, the Phantom replies as he charges towards her. Shunpei quickly gets up and pushes Granny out of the way, absorbing a big blow from Weretiger and falling unconscious. 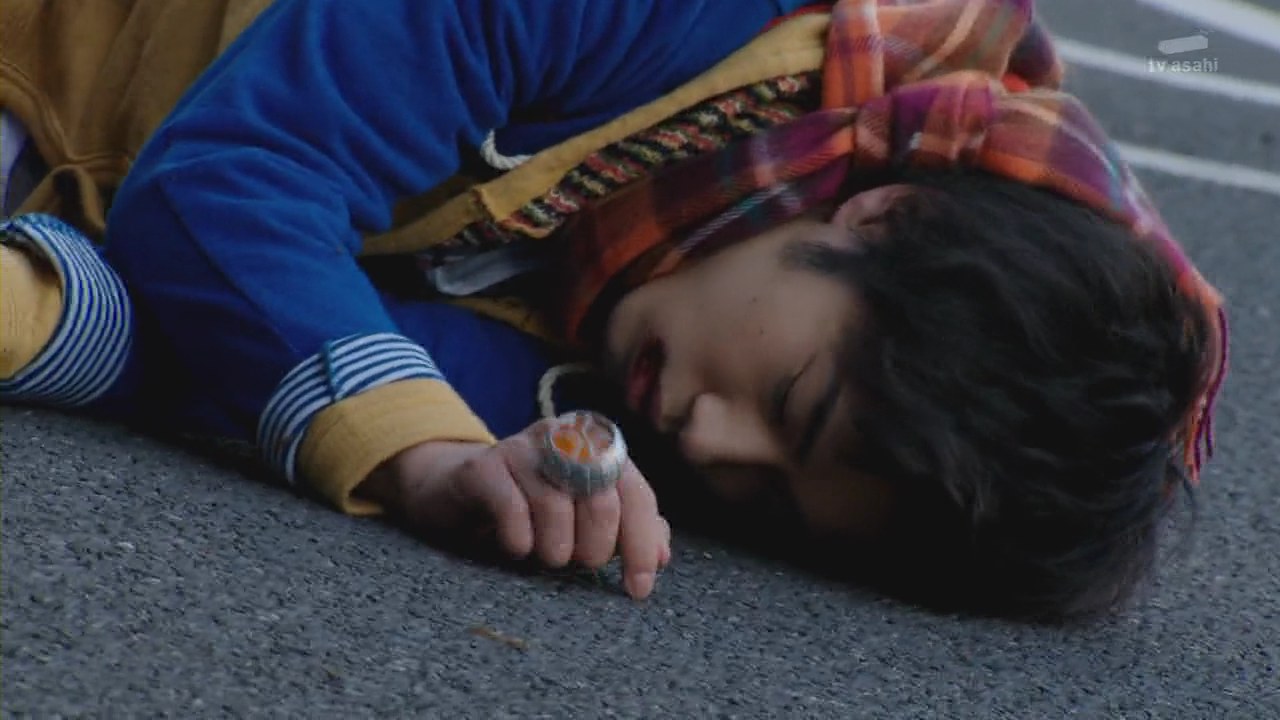 Haruto gets up to check on him, but Sora steps in front of Shunpei. He giggles, things are getting interesting! 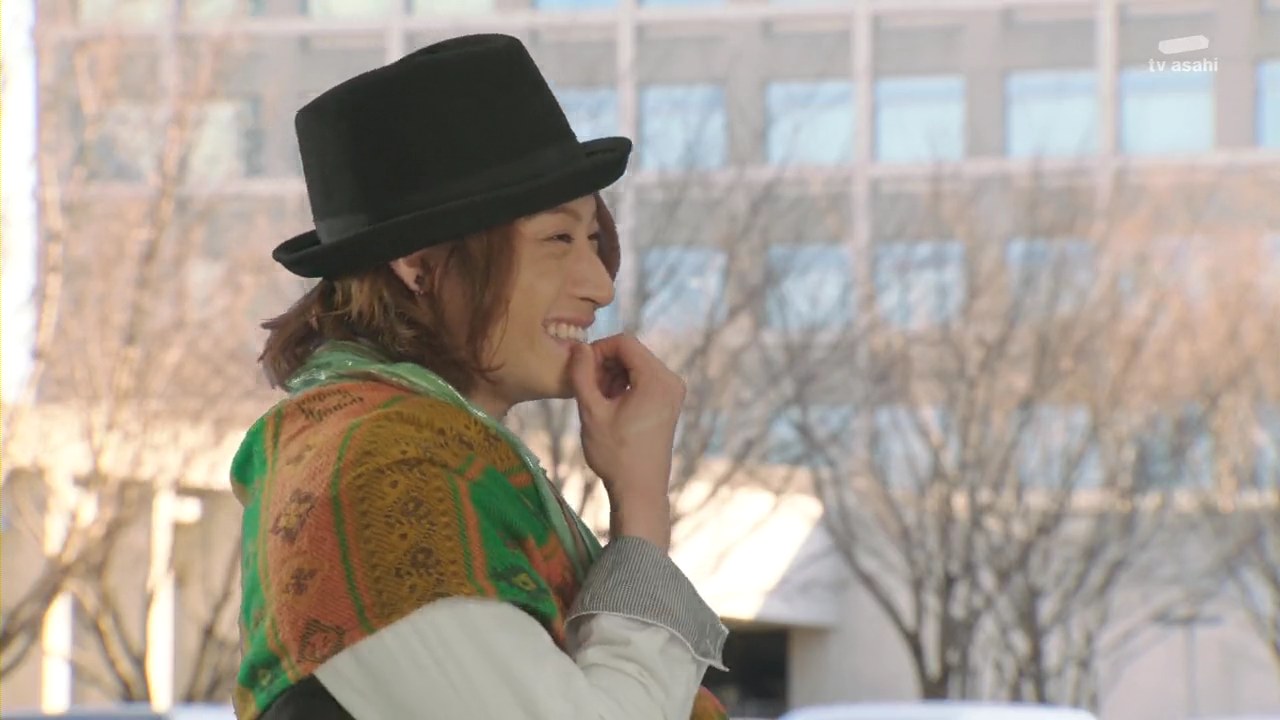 Sora offers a trade. Shunpei for Granny. Granny gets up, willing to offer herself, but Kosuke shakes his head ‘No.’

If Kosuke doesn’t bring Granny to him alone, then Shunpei dies. He giggles again before he, Shunpei and Weretiger disappear in flames.

Episode Thoughts
A very good episode. I always like seeing these Power Rangers and Sentai members and Kamen Riders actually have families. And Granny is awesome. Gutsy Granny.

I see they are now going to put each one of the gang in trouble now? That’s not a bad idea. First Rinko, now Shunpei, I’m sure Koyomi and Wajima are next, maybe even the donut duo. (I hope, at least!)

I’m gonna miss Phoenix, but Sora is definitely a great addition. He’ll kill you for, literally, shits and giggles. Like, literally. Should be interesting to see more from him.

A big chuckle at Kosuke’s big ass in the Beast suit and a big tear at the final scene. I like those combos.