Recap: The Amazing Race 4, Episode 5 – “You Are Just Deliberately Trying to Make Us Lose!” 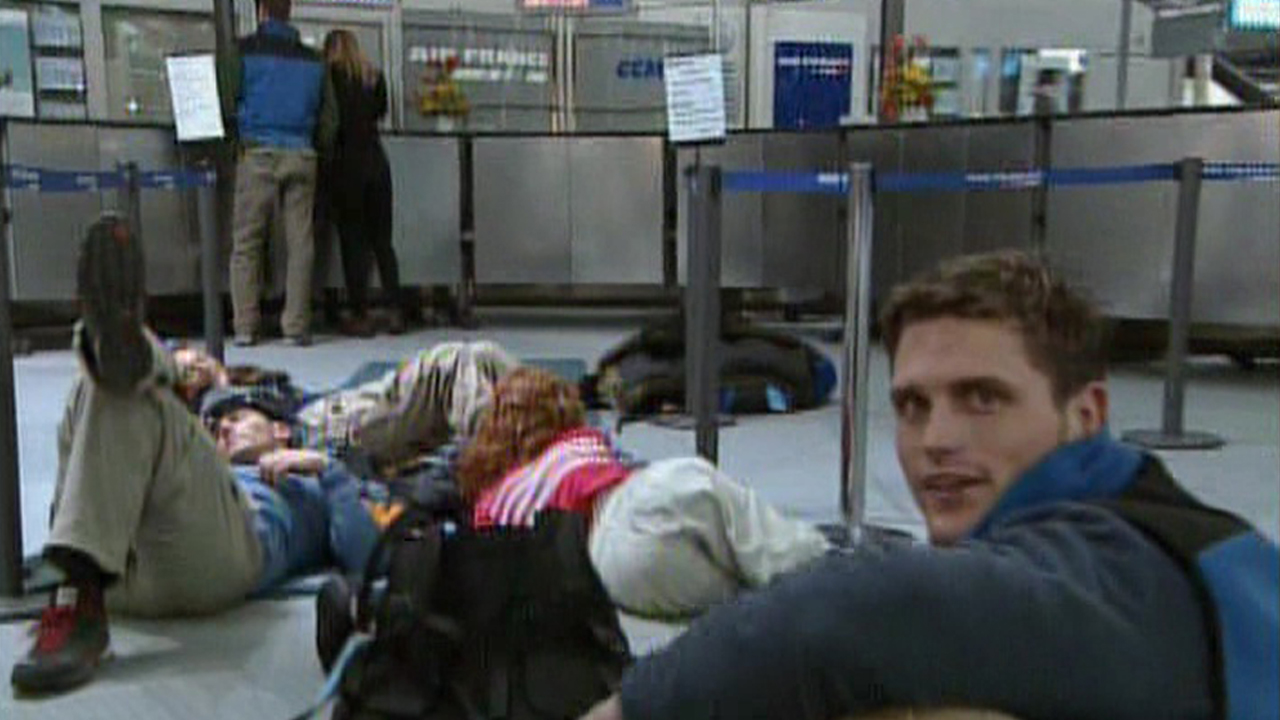 Teams must now fly to Amsterdam, the Netherlands with $90 more for the fifth Leg of the Race. All teams are bunched up at the Marseilles Airport.

With the others in line at Air France, Reichen & Chip ask Tian & Jaree (who are first in line) if they would be able to buy them tickets. Tian says sure. Millie overhears, confronts them and decides she, Chuck and alliance-mates Jon & Al should go to British Airways instead.

When the ticket counter opens, Tian & Jaree learn there are only four seats left on the flight. Reichen & Chip confirm Tian will be buying tickets for them, but Tian says they’ll have to ask Kelly & Jon who are next in line. Jon says there’s no cutting or he’ll punch their eye out.

Reichen & Chip decide to not deal with the drama and will rely on their physical superiority to pass them anyway.

While Tian & Jaree and Kelly & Jon are able to book a flight via Paris-CDG, David & Jeff and Steve & Dave have to fly into Orly and then take a taxi to CDG with a one-hour connection. The other teams are on British Airways via London.

While David & Jeff and BFGs get stuck in Paris traffic, the other teams are already in Amsterdam. They must make their way to Magere Brug for their next clue.

Millie & Chuck hop into a taxi and arrive before the other teams who take the train. They open the clue directing them to choose a boat to drive to the Scheepvaart Museum.

Millie & Chuck are still sitting at the pier when the other teams arrive and catch up. Meanwhile, David & Jeff and Steve & Dave miss their connecting flight and must now change over to a KLM flight. 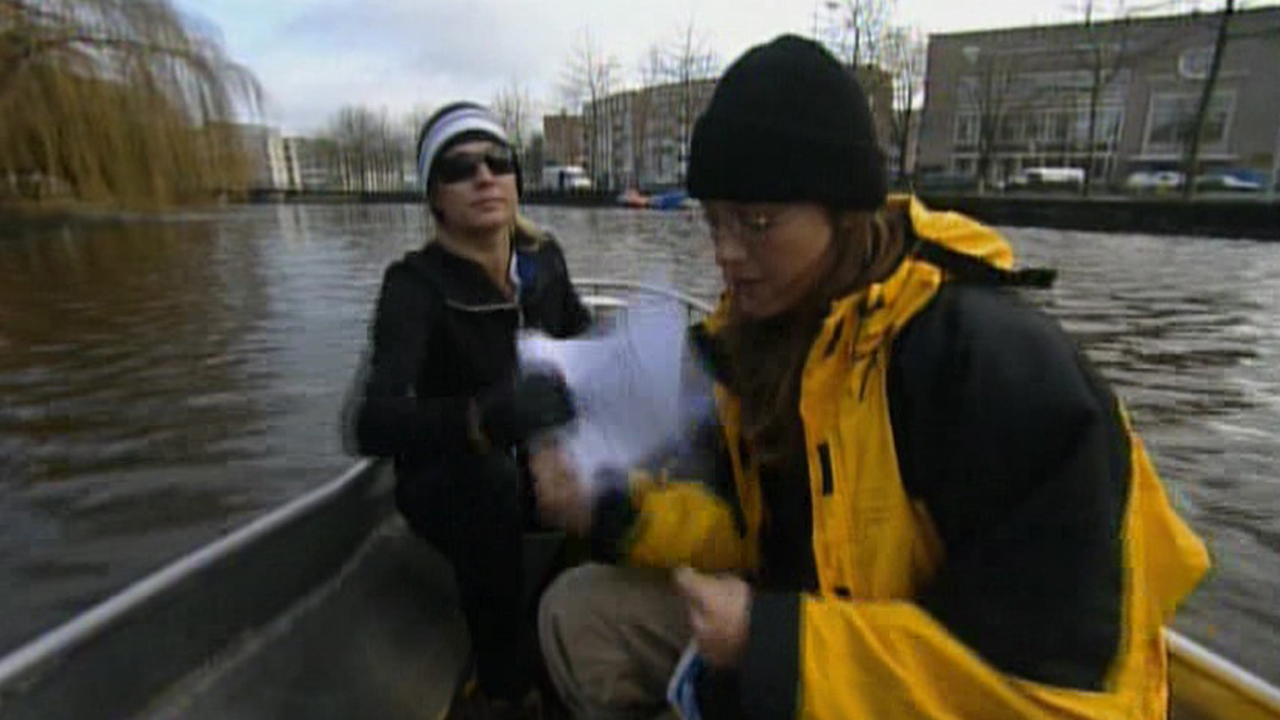 On the waterways of Amsterdam, some teams struggle with directions. Including Tian & Jaree who get into a tense argument over the map.

That allows Jon & Al to arrive at the museum first. They open the clue revealing the Detour: 500 Kilograms or 15 feet. In 500 kilograms, teams will drive to Alkmaar Cheese Market, put on clogs and use a wooden stretcher to carry cheese to be weighed. Once they have exactly 500 kg of cheese, they will receive the next clue. In 15 feet, teams must drive to a ranch where they must dig barehanded in cow manure to search for their next clue.

Millie believes they are way behind now. So she tells Chuck they should consider the Fast Forward. For this Fast Forward, Millie & Chuck must head to Molen Van Sloten Windmill where they will get strapped onto a windmill sail and get spun for 10 revolutions. They easily complete the task and can now head to the Pit Stop at Kasteel Muiderslot. They officially check in as Team #1 and win a cruise to Mexico on Royal Caribbean’s Vision of the Seas. 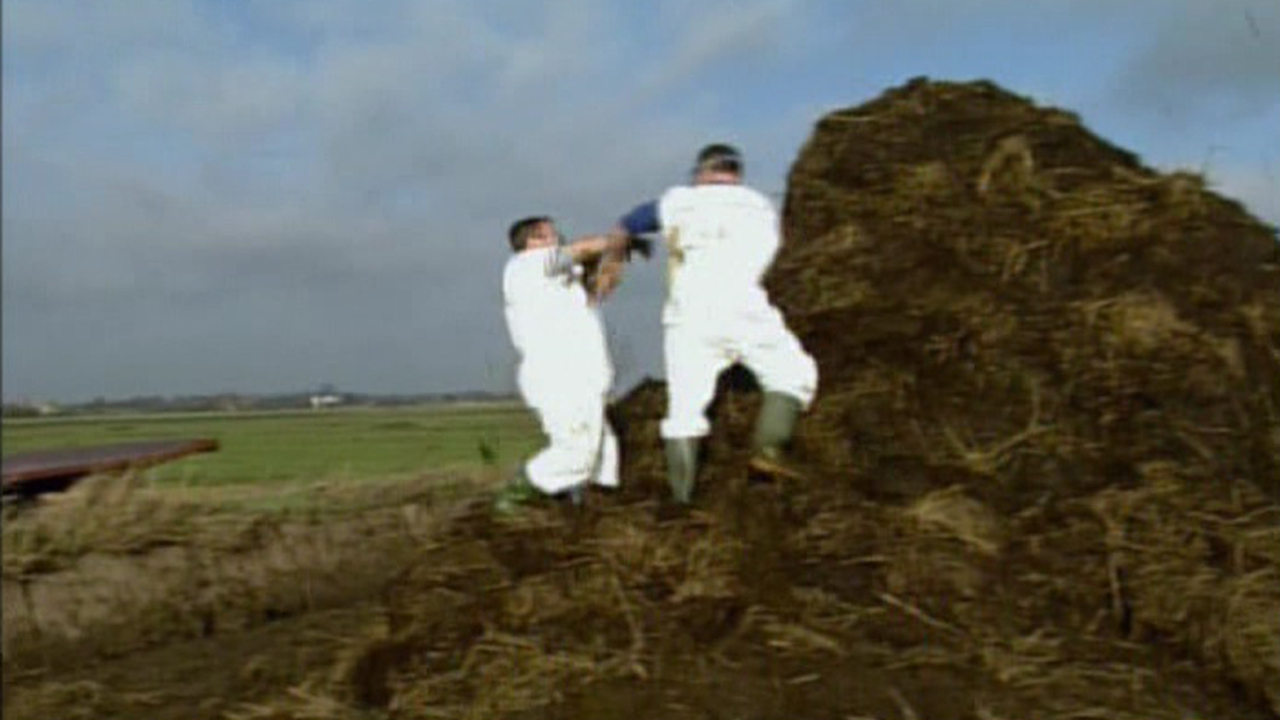 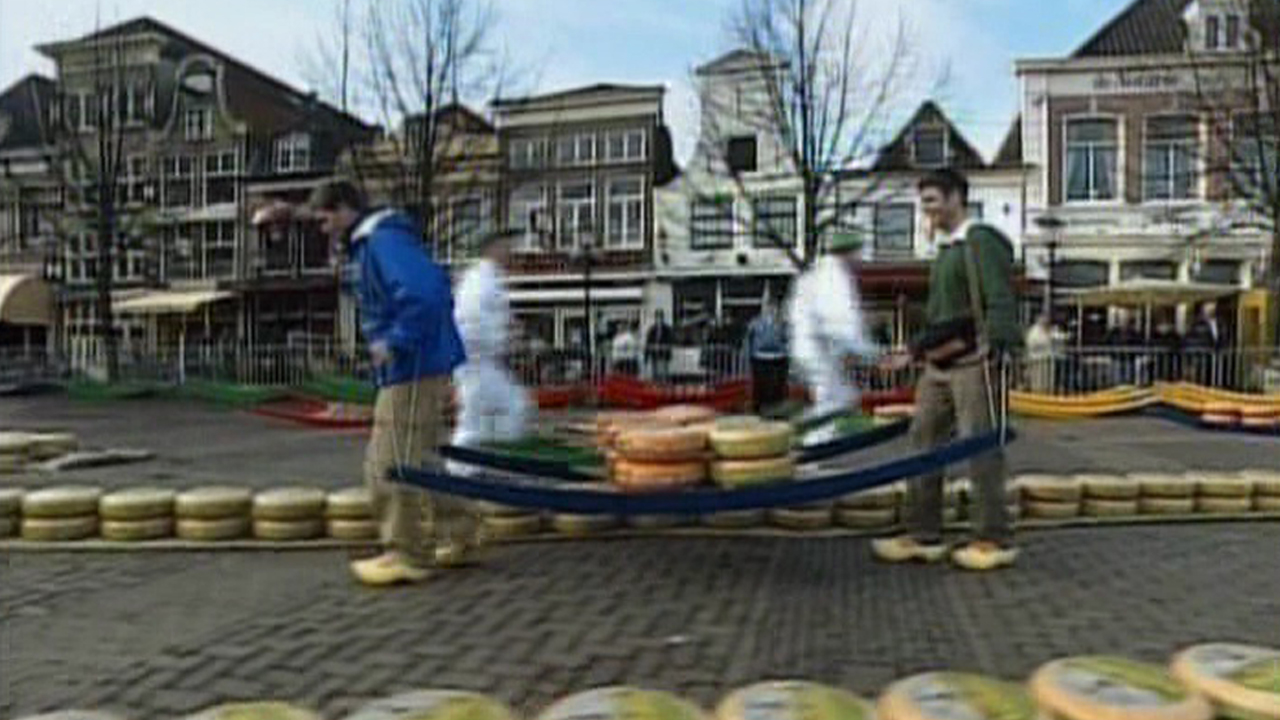 Jon & Al, having chosen the manure, stay in the lead and can now drive to The Smoker Statue in Monnickendam. Kelly & Jon arrive just as Jon & Al are leaving. Reichen & Chip, meanwhile, choose the cheese.

Jon & Al arrive at the Smoker and find the Road Block. For this Road Block, teams must hop in a boat and catch 25 live eels to place in a marked container. Al decides to do it.

Jon & Al leave and head to the Pit Stop as Team #2. Kelly’s Jon decides to do the Road Block and he and they eventually reach the Mat in 3rd.

Back at the manure, Monica & Sheree get their car stuck in the mud and need a local to pull them out. They catch up to Reichen & Chip at the Road Block. Reichen and Sheree choose to do it. 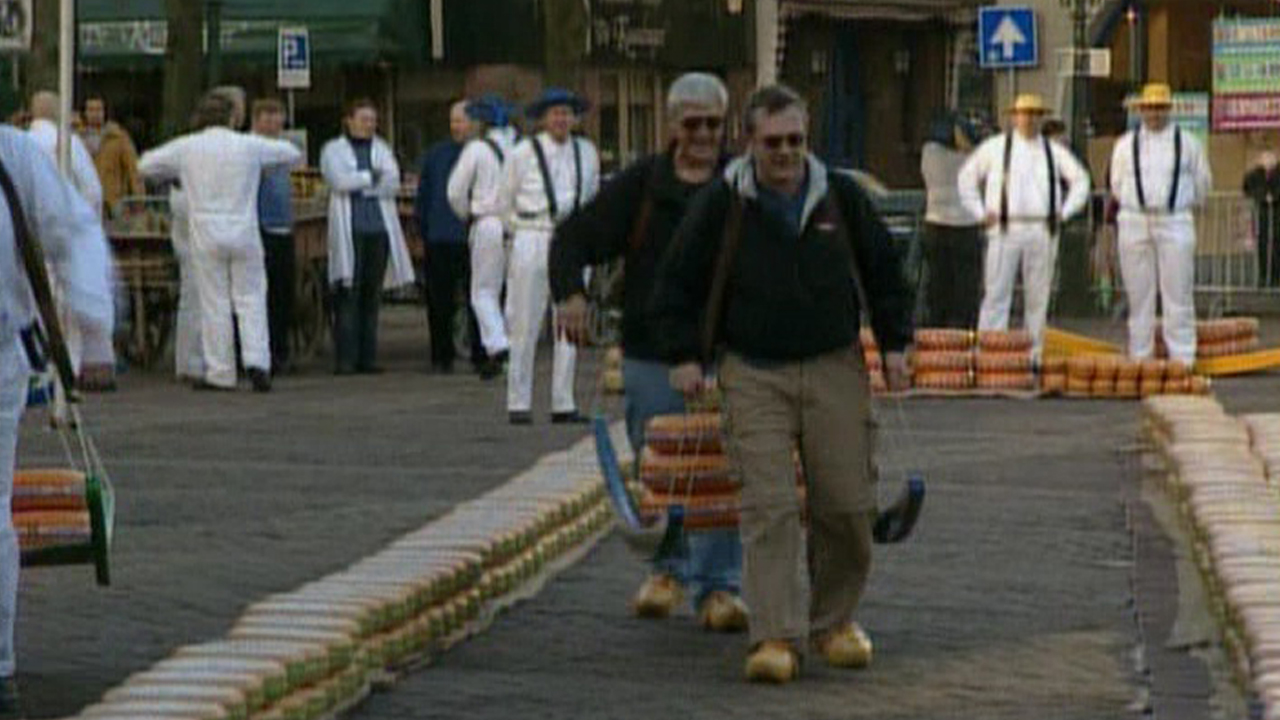 Reichen & Chip and Monica & Sheree, driving to the Pit Stop together, check in as Teams 4 and 5.

Tian & Jaree continue arguing and arrive at the manure when David & Jeff leave. The BFGs finish their cheese.

Jeff’s David does the Road Block while Jaree gets Tian to do it even though she hasn’t done one yet. David & Jeff and Tian & Jaree reach the Pit Stop and check in as Teams 6 and 7. 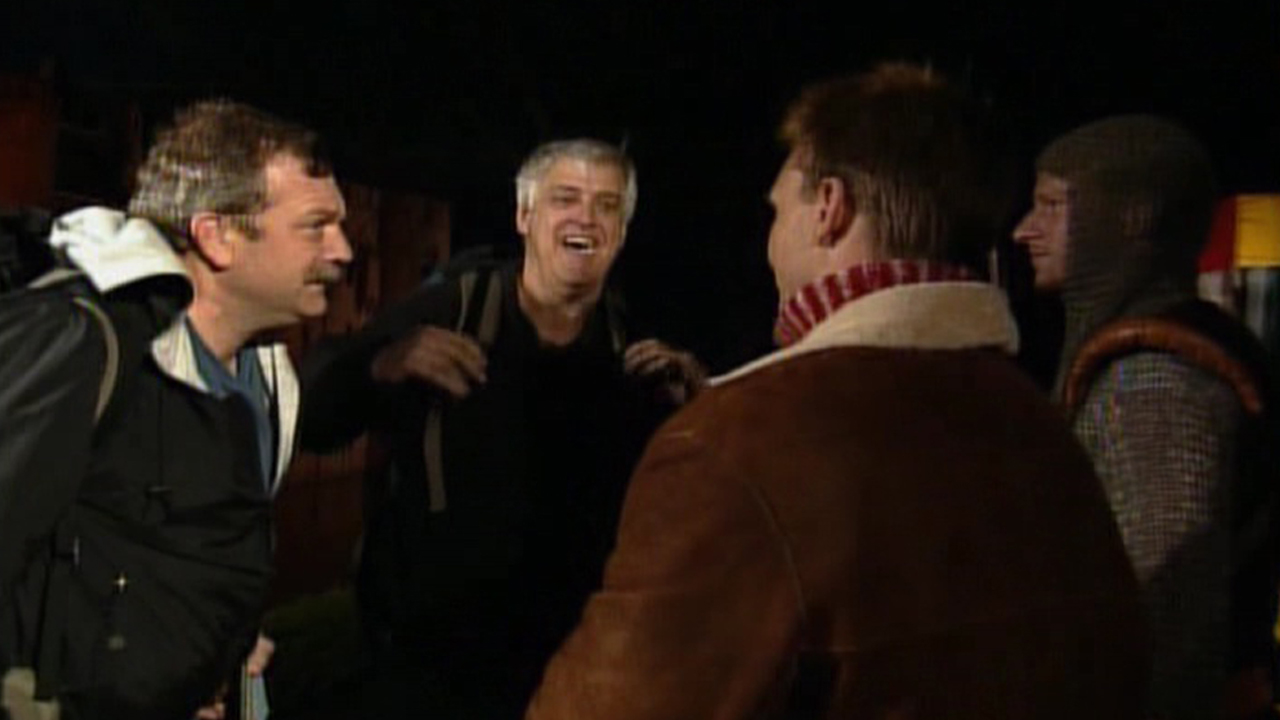 Recap: The #AmazingRace 4, Episode 5 – "You Are Just Deliberately Trying to Make Us Lose!" – https://t.co/fLWSVttcIm pic.twitter.com/kgjbzfYKAE

Another good episode and some better Leg design this week. The teams are definitely delivering on their own though. It’s very refreshing since in recent seasons, TAR has had to manufacture fake personalities to cover for their poor casting. Not so in TAR4.

Anyway! Let’s get to this Leg. A little more airport drama this time, but an appropriate amount. Still, it would’ve been better to see all teams side-by-side once they arrived in Amsterdam. I think if it were any HD Era cast in this Leg? It would be a horribly boring episode.

The boat task was a good Active Route Info task that has been absent in the other Legs so far. And seeing teams struggle and provide some nice bickering drama was good.

Both Detours were pretty good, but seemed kind of unbalanced with distance and ease. The Road Block was also okay. A simple, straightforward task.

But again, the main attraction is really the teams. The dynamics within each team and with other teams are so interesting. And I can’t think of any other season where there’s that much material from the teams.

The bubbling frustration and tension with Tian & Jaree definitely reached a boiling point here. Yet they’re still able to do reasonably well in spite of their differences.

Kelly & Jon are improving each week as Racers. Which is great when paired with their hilarious personalities. Steve & Dave are a great team as well that while not physically the strongest team, they are able to be fun and funny without feeling forced.

Reichen & Chip were a little more quiet this week than they have been. The moment at the airport with Jon is definitely just a taste of things to come. Monica & Sheree continue to do well under the radar. And their relationship with Reichen & Chip is nice to watch too.

Millie & Chuck are probably the most multi-layered characters of the season. From their virginity to the tension between them and their alliance ways and the brewing rivalry with Kelly & Jon; they’re definitely an important part of this season.

Jon & Al and David & Jeff are pretty much the normal, middle of the road teams so far. Which certainly puts them in a good position moving forward.

Kelly: “He’s very handsome, but he does look like second stage of werewolf.”

2 thoughts on “Recap: The Amazing Race 4, Episode 5 – “You Are Just Deliberately Trying to Make Us Lose!””