Hiiro, Taiga, Kiriya and Kuroto confront Papa Dan after learning of Parado’s death. Emu handed Hyper Muteki to them to use, but with its limited 10 second rule for them, it was of no help. Kuroto, ensuring the Gashat’s safety, retreats leaving the other guys to be forced to dehenshin after a Pause. They also find their Gashats and Driver have been taken by Papa Dan, but he says they can still play Chronicle as Ride Players if they like.

Later, Papa Dan gets a call from Johnny Maxima to confirm he has the Drivers and Gashats he ordered.

An exasperated Poppy asks Emu why he killed Parado. He brings her up to the roof to explain. He says he and Parado’s hearts are connected, so he felt what Parado felt in his heart.

Emu henshins to Mighty Brothers XX and the Ore brother is actually Parado, safe and sound. Emu says he absorbed Parado into his body before he died to save him.

They both dehenshin. Emu says they are even now and that Parado must now know how truly terrifying death really is. Parado doesn’t want to hear any more, so he leaves.

Graphite is relieved to see Parado back, apparently fine. But Poppy has followed him here. She says Emu fought Parado for real just so he could know what impending death feels like. Poppy adds that she knows Parado admires Emu and wants to become human like him. That’s why he always talks about his heart and how it feels. Graphite says that’s absurd.

But Poppy knows Parado wishes he were more than just a programmed game character. He wanted to be a human with a heart who can have friends. That’s why he made his own Driver so he could play with Emu.

Graphite slaps Poppy to the ground and says Bugsters cannot coexist with humans. Humanity is their enemy that they must cut down.

But Poppy says if humans are all dead, they’ll have no one to play with. That’s why Bugsters should get along with human players so they can all have fun playing with each other.

Graphite turns to Parado and says not to believe Poppy. Instead, believe that he will be able to defeat Emu next time they face off. “Enough,” Parado says, “Stop it.”

Parado gets up and leaves. 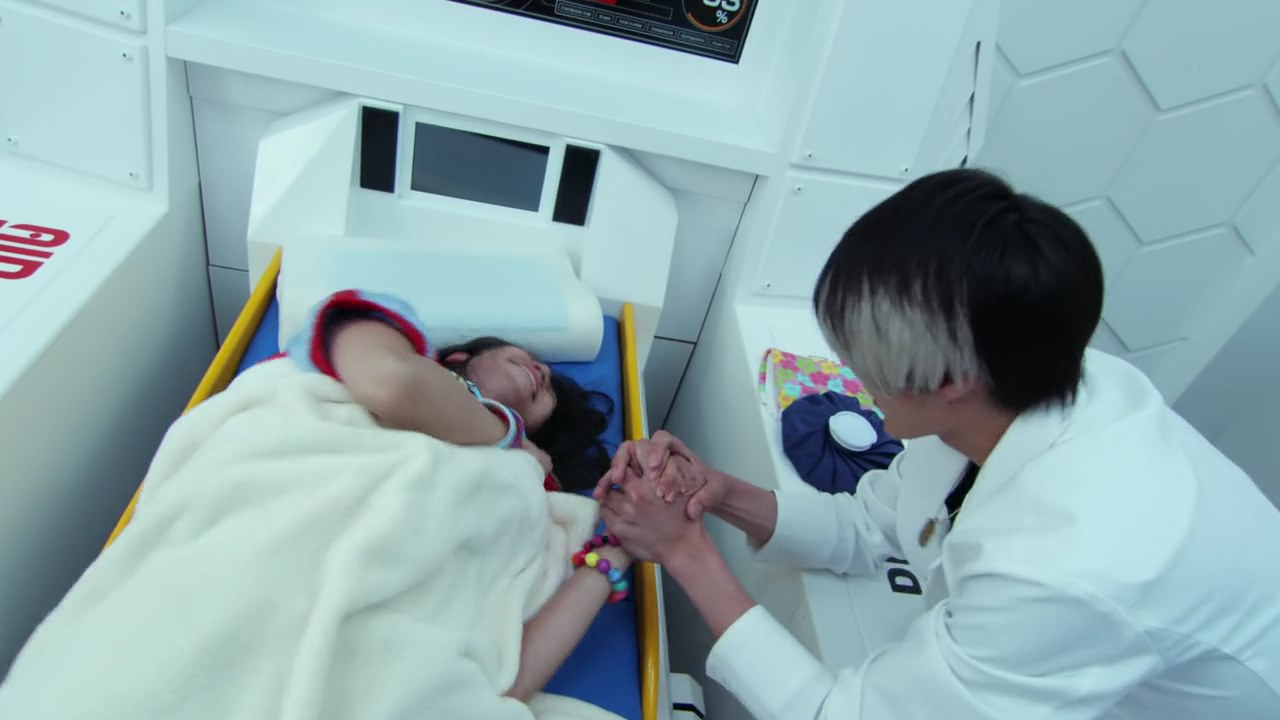 Down in the CR, Nico is running out of time. She struggles as she admits that she joined Chronicle just so she could defeat other players and be the best. Taiga tightly holds he hand in his.

Meanwhile, Poppy has just told Hiiro, Kiriya and Kuroto that Parado is alive. She is sure Emu will be able to save Nico-chan.

Up on the roof, Parado approaches Emu. He puts on a happy face and says he just wants to play with Emu. Emu says Parado didn’t have to kill people if he wanted to play. Parado explains that it was only so Emu would give it his all when they played as he really enjoyed playing with him so very much. It was a joyous feeling. 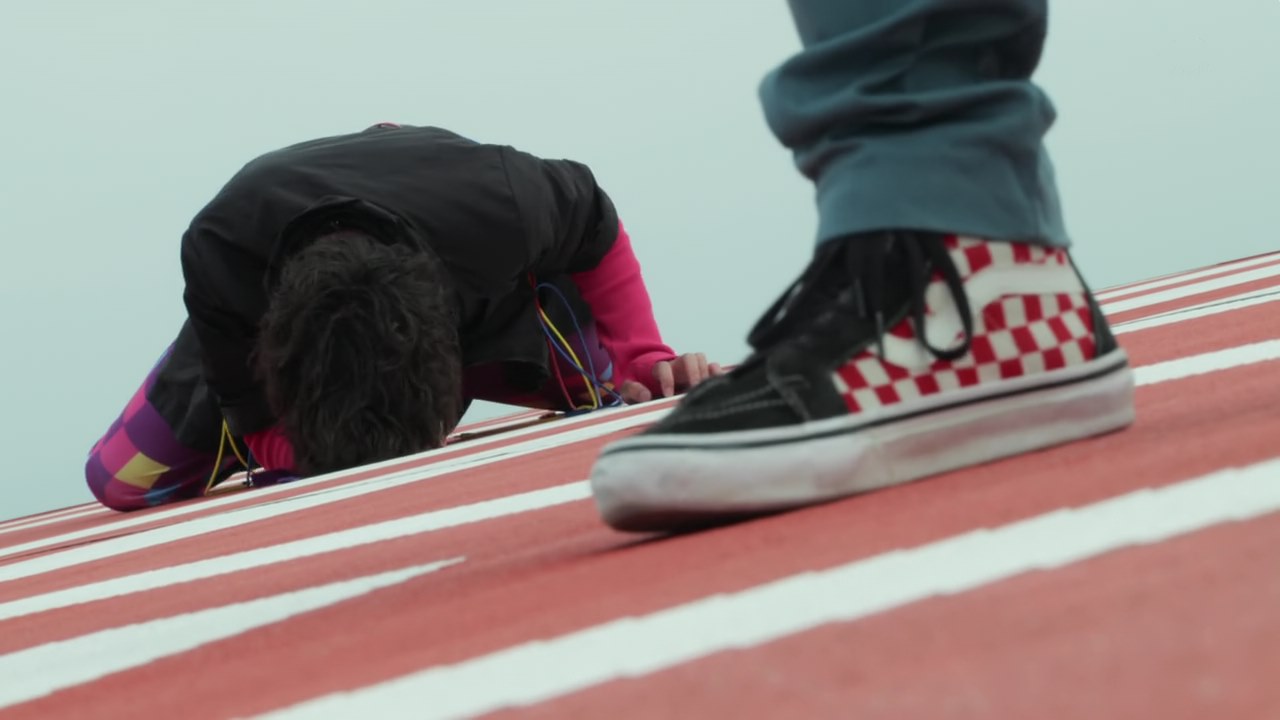 Parado’s happy smile turns into sadness as he relates his conflicted feelings, including what he felt when Emu was about to kill him. Parado falls to his knees in tears, admitting he was afraid.

Emu does his best to keep himself from exploding as Parado continues.

Parado says he never knew the meaning of a life that couldn’t be Continued and did not realize what he was doing had that finality. He repeatedly says “I’m sorry.”

Emu says every patient he’s ever met knew the fear of death and knew the value of their lives. He turns to Parado and says now, he too should know the same. That lives are irreplaceable. “You have a heart,” Emu says.

Parado asks why Emu is being so nice to him, especially when he’s a virus that is infecting him right now. Emu says his Game Disease comes from his personality. It is a part of him and since he brought Parado into this world, he is responsible. He will face him, share his sins and atone for them.

Emu asks Parado to promise him not to take any more lives and to fight together to save lives.

In the deep water, Emu reaches out for Parado’s hand…

Papa Dan is excited that Chronicle is ready to take over the world. But first, he has to face Emu and Parado who approach, together.

Parado says he will co-op play with Emu from now on. Papa Dan henshins with the hope of putting their games out of print.

Parado splits in two and is able to control the power up coins before Papa Dan can use them. That allows Emu to get in a couple of attacks to wear him down further.

Finally, Emu and Parado deliver a Hyper Critical Sparking and a Perfect Knock Out Critical Bomber at Papa Dan which destroys the Chronicle Gashat.

Papa Dan is incredulous. Something suddenly activates in his DNA. His big clocks starts turning counterclockwise and a Reset is announced. Both Emu and Parado dehenshin for some reason. Kuroto notices the Hyper Muteki Gashat is gone.

Not only that, the Chronicle Gashat is back and intact.

Well this is certainly the point of no return for the show. You present probably the best episode to illustrate the importance of life and the finality of death, you better not go back and use some kind of power up/reset button/system recovery/backup data hocus pocus to start bringing people back to life just to have a happy ending of some sort.

This was really a great episode too to use the contrast of video games and medicine/real life to help drive home the points about life and death. And it certainly did a much better job in one episode than pretty much all of Ghost, to be completely honest. lol

I was hoping we’d get that scene of Emu reaching out to “save” Parado in the water. I was expecting it, though ready to be let down if we didn’t get it. But we did. And it wasn’t any less effective by expecting it to happen. That was really a great sequence, starting with Parado appearing with a happy face only to completely break down while Emu stifles his anger/frustration/everything he’s kept inside all this time. Culminating with that familiar, though effective shot(s) of the two former adversaries, now teaming up. It was great.

Poppy’s expository speech in the warehouse scene with Parado and Graphite helped to tie everything together. That is, all the pieces that have been sprinkled throughout the season about Parado’s disregard of life, his recent fear of death, not wanting to be used merely as a plaything/pawn, simply being able to have fun with friends, wanting a sort of free will and freedom, being human (?) and realizing he wanted a life that was worth saving.

The idea of wanting to become “human” too is the kind of story I wished for the Roidmude in Drive. And it’s interesting to consider that, as he pointed out, he is just a virus. But now can feel a heart and have emotions. He doesn’t have to be resigned to the idea of being a mere video game villain whose only reason for existence is to be defeated and killed over and over again. He can have more meaning in life. And him realizing that in this episode was a nice way to sort of wrap up his main story.

But this reboot, restart thing. Like I said last week, I have no idea where this idea is heading. Of course initially, it undid the huge victory by Emu and Parado’s cooperative play. And maybe turned back time to where the Hyper Muteki Gashat doesn’t exist. But I certainly hope it’s more than that. We’ll see next week.

Also next week, it’s the “decisive” battle with Graphite. I hope we get at least one scene of Parado trying to “convert” Graphite and drag him over to the light. I have no idea if it really will be his last episode. But if it is, I hope it’ll be a satisfying conclusion to I think one of the more underdeveloped plot threads of the season.

I won’t even touch the Johnny Maxima stuff. I have no idea how important or not he is to the series itself, so I’ll just let that play out.

Overall, I think this was a great episode.