Recap: Kamen Rider Drive, Episode 13 – Why Won't My Brother Put On the Brakes?

Everyone’s at the Pit as Belt-san talks to his former teacher Harley Hendrickson in the US asking about Gou. Apparently, Gou has cut his training short and returned to Japan on his own. Harley-sensei says Mach is complete, but still very dangerous. Harley-sensei asks Belt-san to please watch over Gou.

Rinna explains to Shinnosuke that Mach was developed with next generation system to surpass even Drive. And Gou was picked to be the user.

But Kiriko is not happy. She shakes Belt-san demanding to know why he secretly decided to make her otouto a Kamen Rider. Shinnosuke tries to get Kiriko to calm down.

Gou sees them and says they look great together and would make a great picture. He’s happy his pretty, but stiff sister has found a nice guy for herself.

Kiriko and Shinnosuke separate as Gou smirks and flips around the Pit. Gou says he’ll call Shinnosuke “Shin-niisan” from now on.

Gou’s neechan and new niisan get defensive and try to explain they don’t have that kind of relationship. Gou gets on his bike and just laughs.

Later, Kiriko and Gou visit their parents’ memorials. Kiriko says they should go home now, but Gou says while he knows she cleaned the apartment for him, he’ll find his own place.

“I know I’m a troublemaker, but I really do love you, Neechan. In this world, all we have is each other.”

Before Kiriko can process her brother’s sincere words, Shinnosuke calls as the Gravity Shift wristbands have popped up again.

This time, it is being used by a trio of masked robbers who call themselves the Heaviness Gang and are planning to rob a bank at noon. Rinna believes the wristband is some kind of terminal to allow the Roidmude to distribute his Gravity Shift ability. Shinnosuke thinks they must be selling the bands from somewhere. 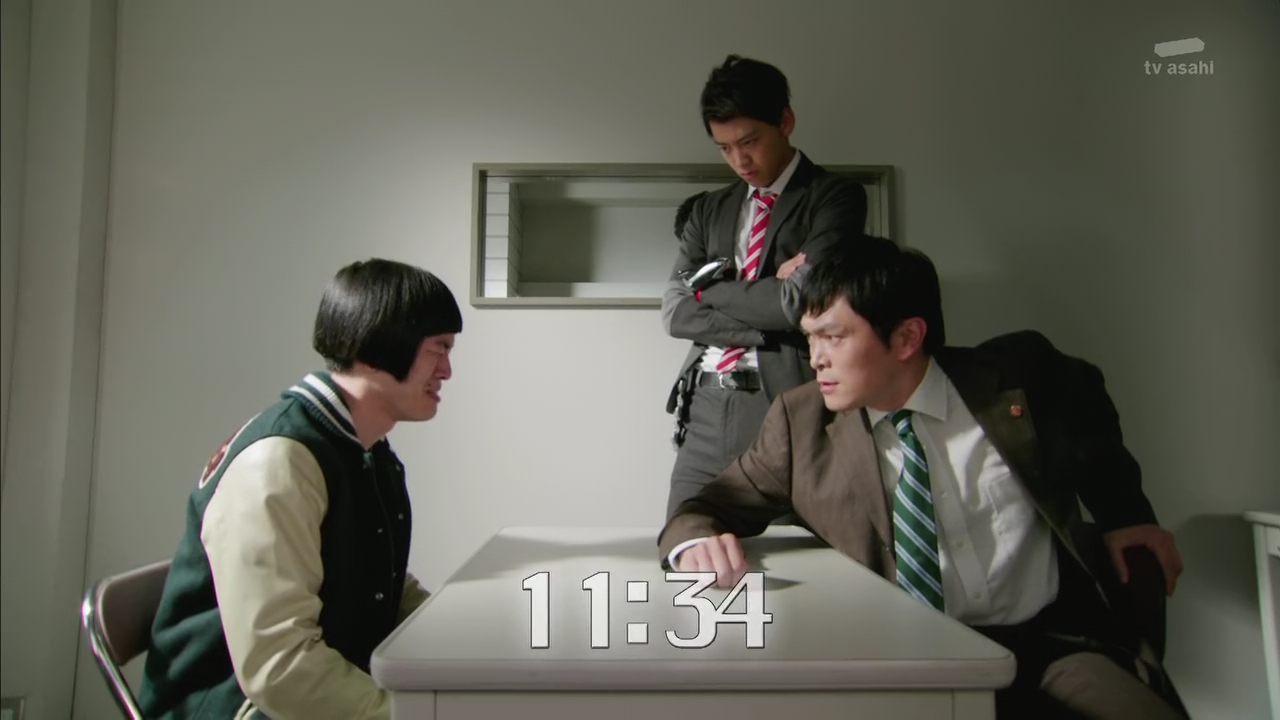 Shinnosuke and Otta interrogate Todokawa, but he has no memory of even buying the band. Shinnosuke says perhaps the bands erase memory when used.

“No matter how horrible a person is, if you kill him, then you’re as bad as him. Don’t ever sink to that level ever again!”

Over at their latest hideaway, the Roidmude idol group bosses are discussing how horrible the humans can be after watching another display in the Heaviness Gang.

Medic dances around and says all this publicity is great for 018’s band business especially since Gunman and 018 took on bodies of two brothers who work in the underworld.

“I already know all of that!” Heart says, annoyed.

Heart says they must protect 018 so he can evolve and asks Chase to do it. 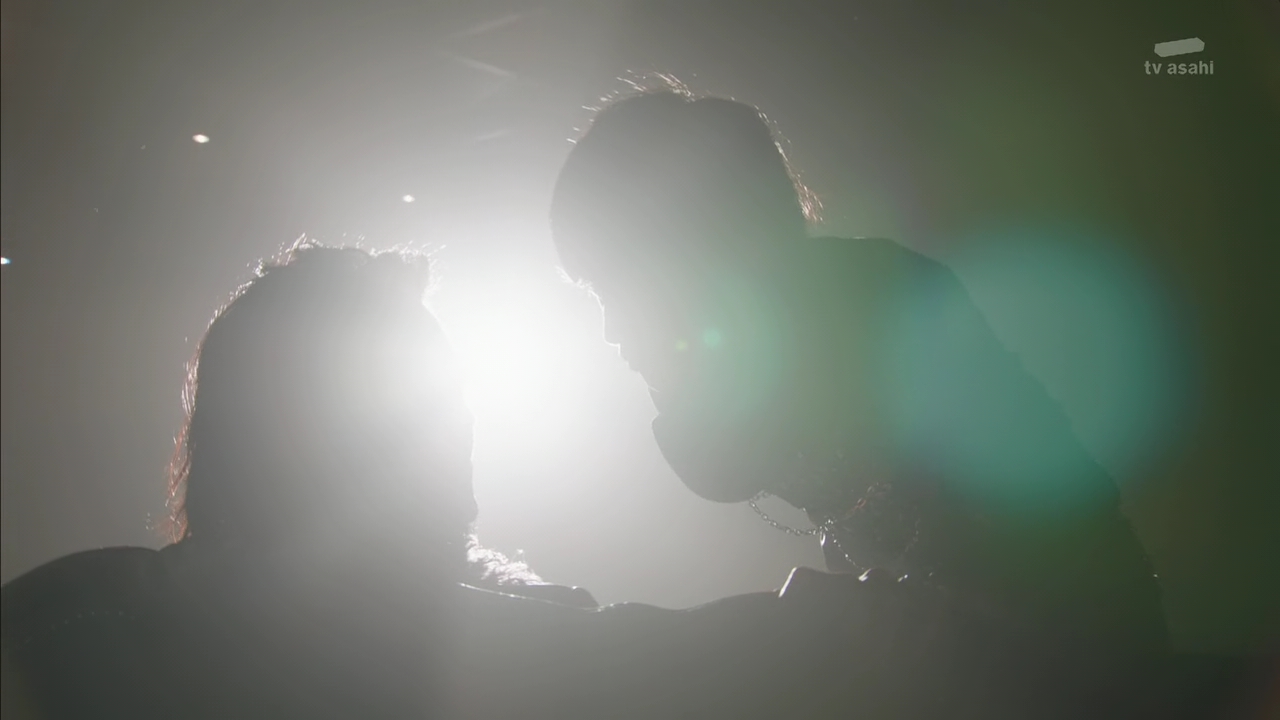 But first, Chase says he saw his number for the first time and wants to know who he is. What he is. Especially as he has no memory before the Global Freeze.

Heart says Chase is a “great warrior” and that Zero is a glorious, honorable number. Chase needn’t worry and should just fight for now.

Otta and Kiriko are at the targeted bank with a wall of police in riot gear ready for the Heaviness Gang’s arrival. Shinnosuke is there with Tridoron as well.

But as the Heaviness Gang drives to the bank, Gou, already henshined and on his bike, stops them in their path.

He activates a Gravity Shift Controller Limiter and the Heaviness arrives, also affecting the three Heaviness Gang members. Shinnosuke hurries into Tridoron and Belt-san says this Heaviness is not from the band’s Gravity Shift.

Shinnosuke henshins and hurries over. Gou has already removed the bands from the three gang members and Shinnosuke realizes Gou activated the Gravity Shift.

Shinnosuke jumps out of Tridoron and he and Gou fight.

“Gou! Do you know how afraid the people are of the Heaviness?!”

Fine, Gou says as he de-henshins. “That’s why we’ve got to destroy the bands, right?”

Shinnosuke de-henshins as well and says that even if it is for a good cause, if they use the Gravity Shift on people, they are the same as the Roidmude. They should not sink to their level.

Gou says his Shin-niisan is pretty serious. But if they use the enemy’s power to fight them, aren’t they monsters too? They’re already at their level. If they can beat their enemies that way…

Shin-niisan has no time to answer as Kiriko arrives.

Back at the SID, Chief Jun has returned from golfing with the important people and sees they are in the middle of something. Shinnosuke says they’re just dealing with some obstruction of justice. Otta tells Chief Jun the kid’s Kiriko’s little brother.

“Ah! What a naughty boy! You shouldn’t have let him tag along in the first place.” 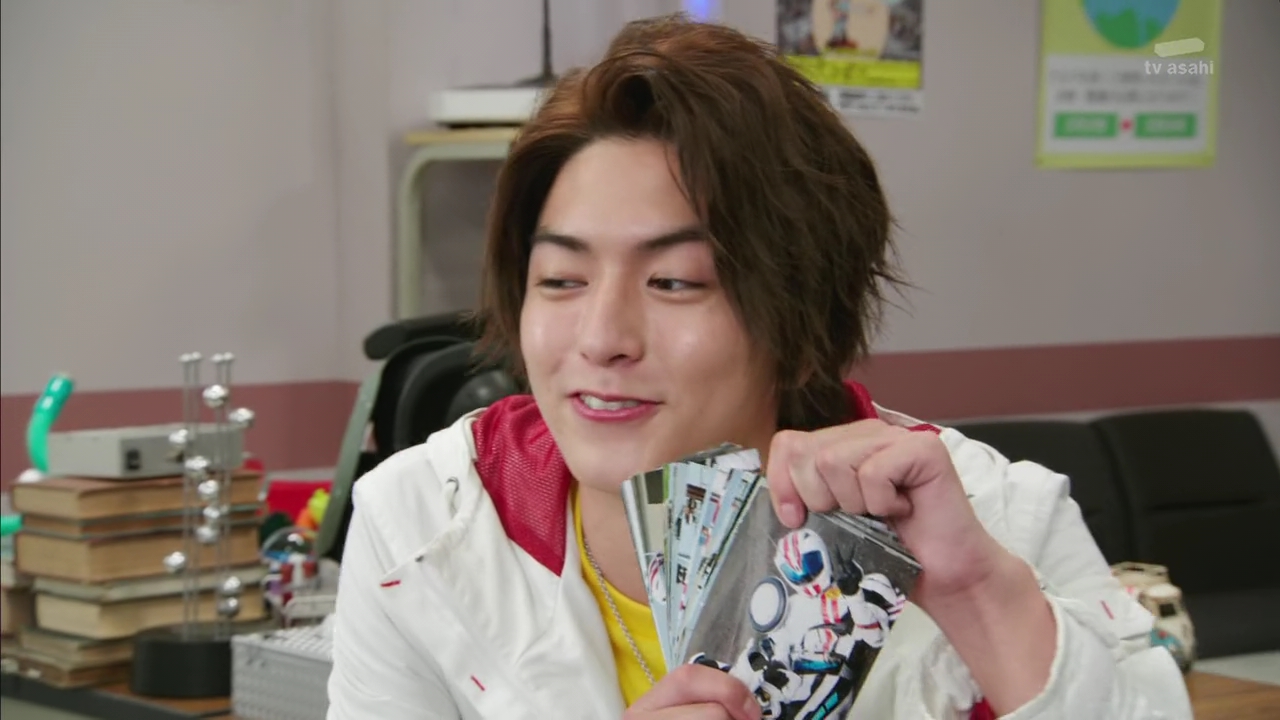 Kiriko apologizes, but Gou introduces himself to the Chief and says he’ll be dropping by the SID often from now on. He’s even brought some exclusive photos…

Of the Kamen Rider!

Chief Jun, Otta and Kyu are all very excited. 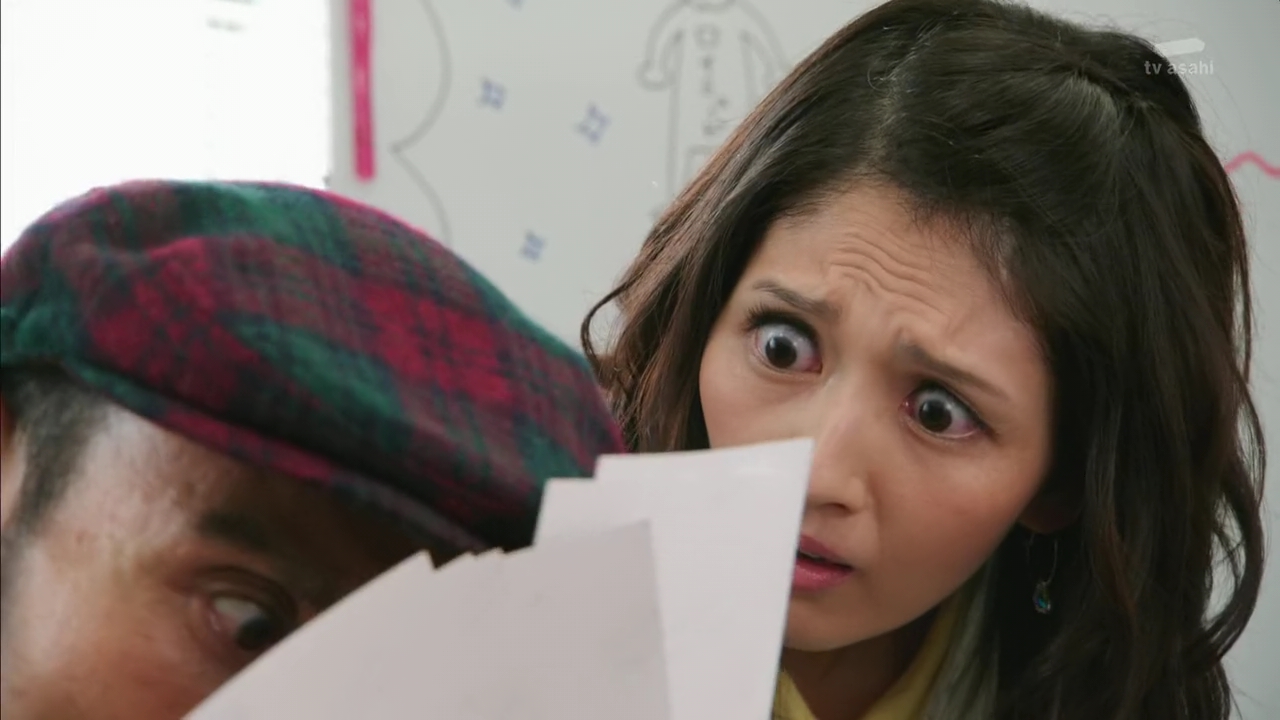 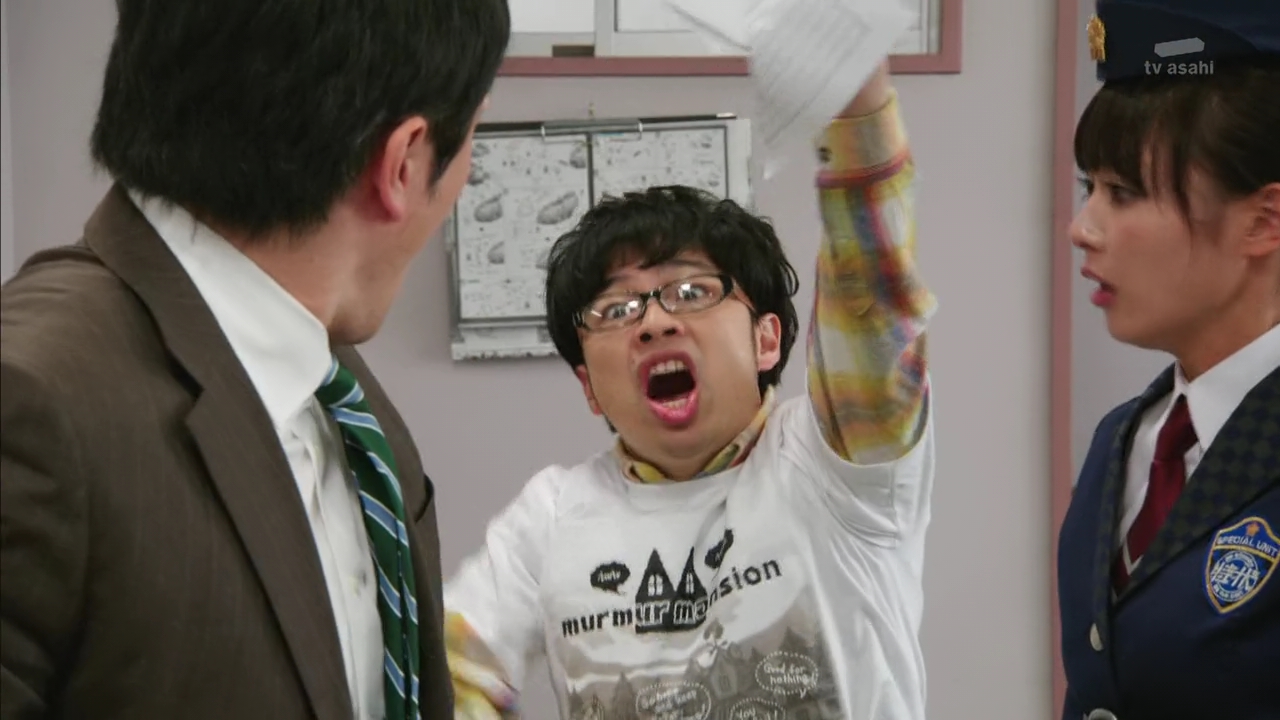 Otta is shocked that the Kamen Rider is all white! Kyu rips Otta’s original drawing of the green/red/black Kamen Rider. 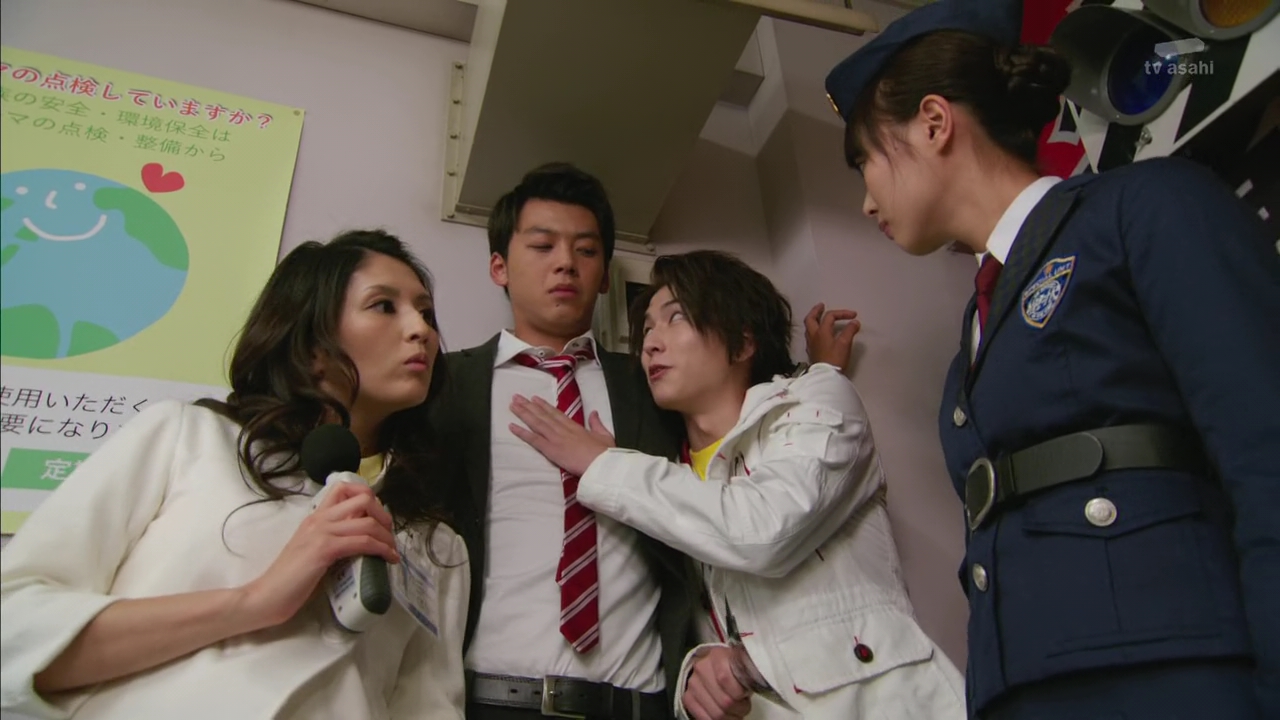 Shinnosuke drags Gou outside and Kiriko and Rinna follow. How did he get those photos? Gou says he set up the camera and the Signal Bikes took the pictures for him.

Gou says Drive being a police officer has its advantages, but it has disadvantages as well since Gou can do things Shinnosuke may not be able to in his position.

Gou takes two flowers from his jacket. “Now for the fun to start.” 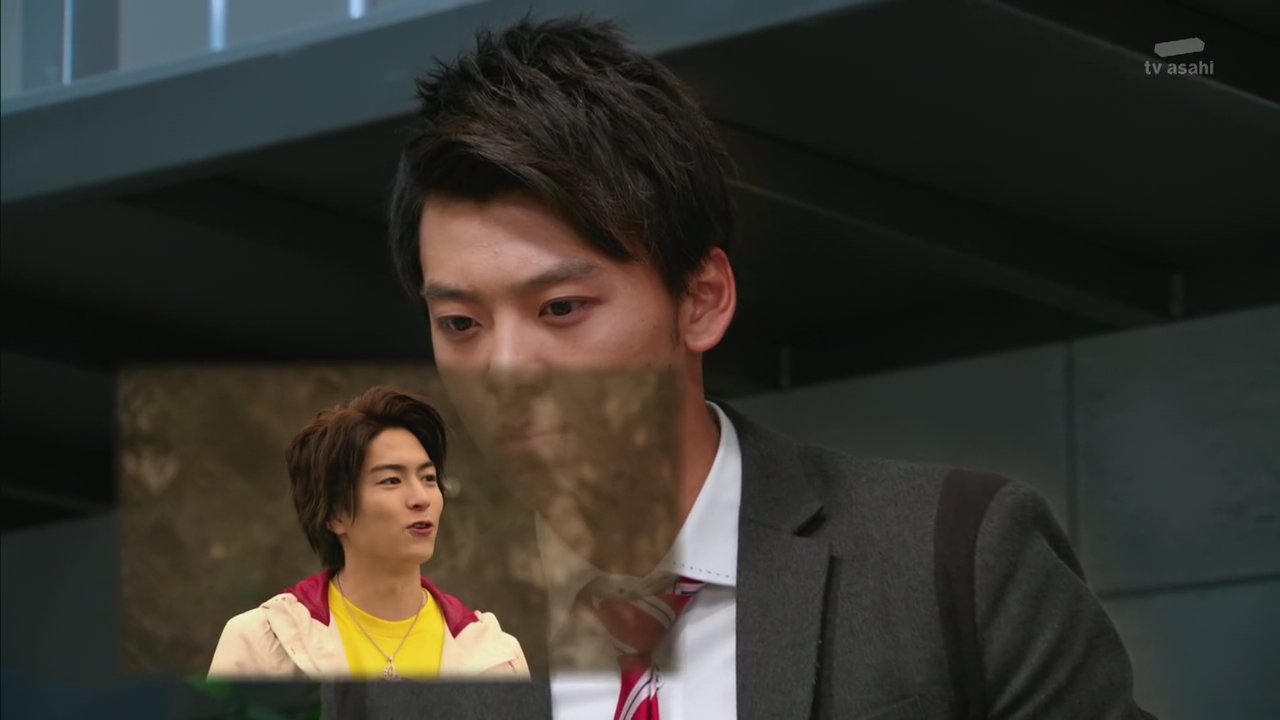 Back at the Pit, Belt-san says Mach Driver Flame has its own supportive AI. In exchange for greater offensive capabilities, it puts a greater burden on the user than Drive does.

An ambiguously acting Rinna snaps out of it and tells them that Professor Harley was looking for a way to reduce the strain on the user. But then why did Gou run back to Japan instead of waiting?

That gets Shinnosuke into top gear. “That idiot!”
Shinnosuke asks the Shift Cars to look for Gou. 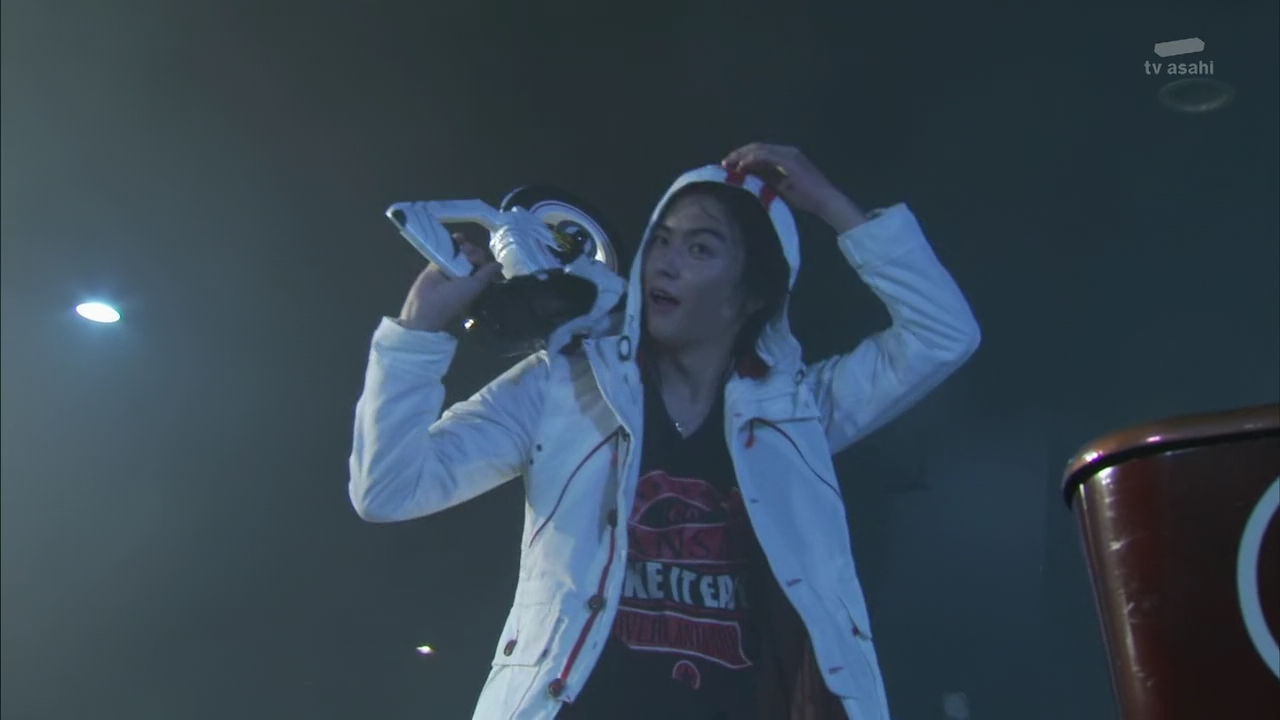 Wearing a hood and sunglasses to cover his face, Gou goes to where Gunman and 018 are, posing as someone who wants to buy a band.

Chase, here as bodyguard, tosses a pool stick at 018, revealing the money is fake. Gou shoots. Gunman fires back.

Gunman tries to initiate a Gravity Shift, but it doesn’t work. Chase realizes he is the Kamen Rider. He goes Mashin and chases Gou outside.

Chase, Gunman and 018 continue shooting at Gou. Gunman tries another Gravity Shift and this time it appears to slow Gou down. But before their bullets can hit him, Tridoron blocks them. 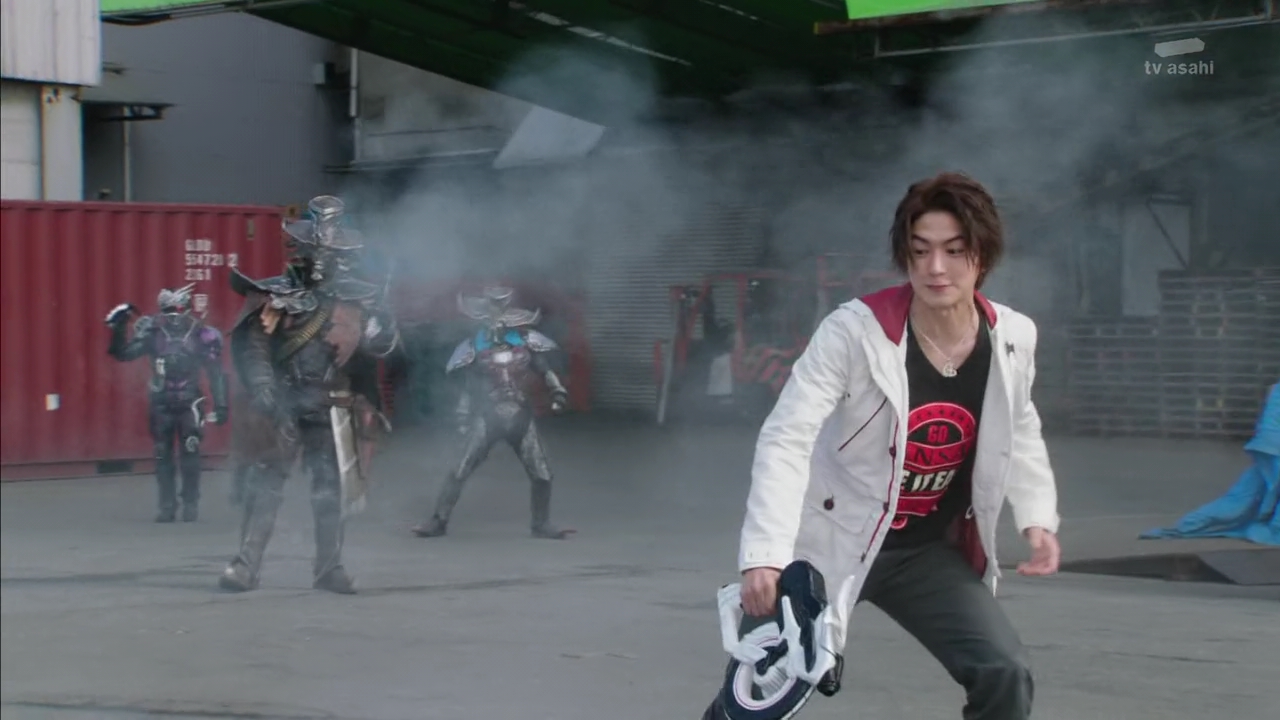 Kiriko returns fire. Seeing her, Chase gets a headache of some sort. Shinnosuke pulls Gou behind some crates.

Shin-niisan explains how he figured out what Gou was planning to do, including having already tangled with Gunman and 018 in America. 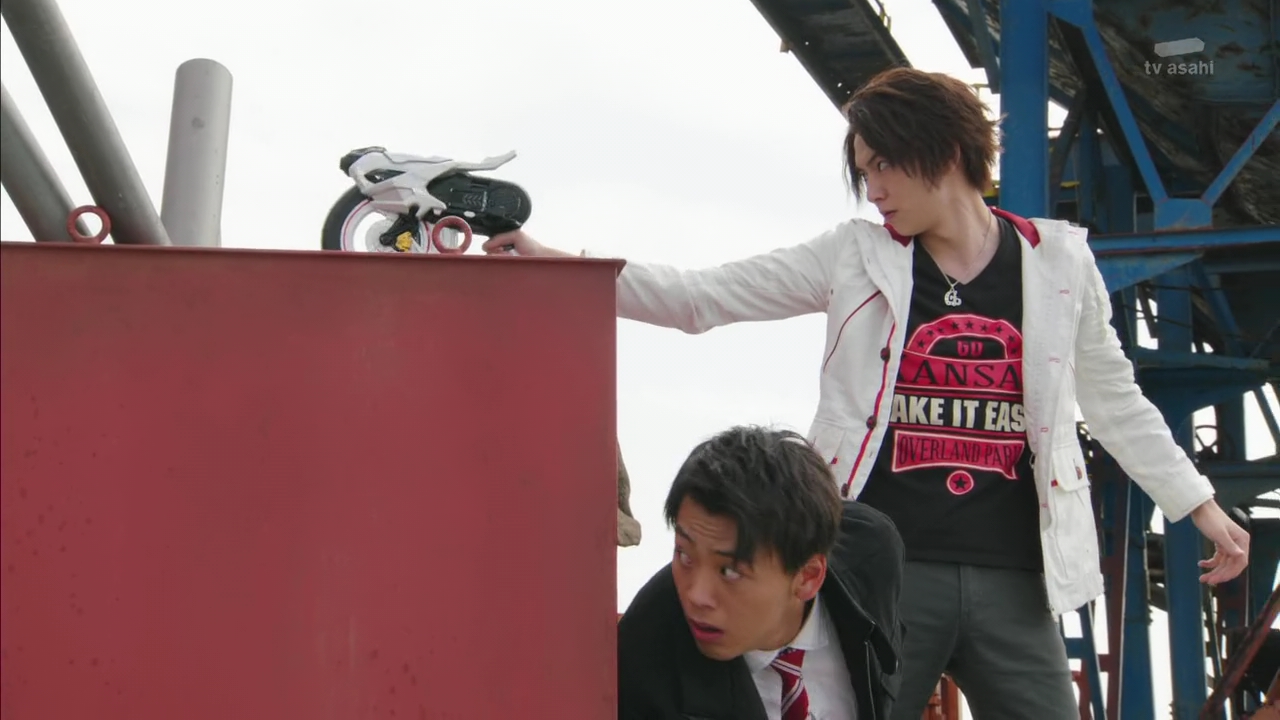 Gou is very impressed by his niisan. He shoots at 018, giving Shinnosuke time to henshin.

Gunman tells Chase to snap out of it and Chase and Shinnosuke fight.

Gunman and 018 corner Gou and Shinnosuke wonders why he doesn’t henshin. 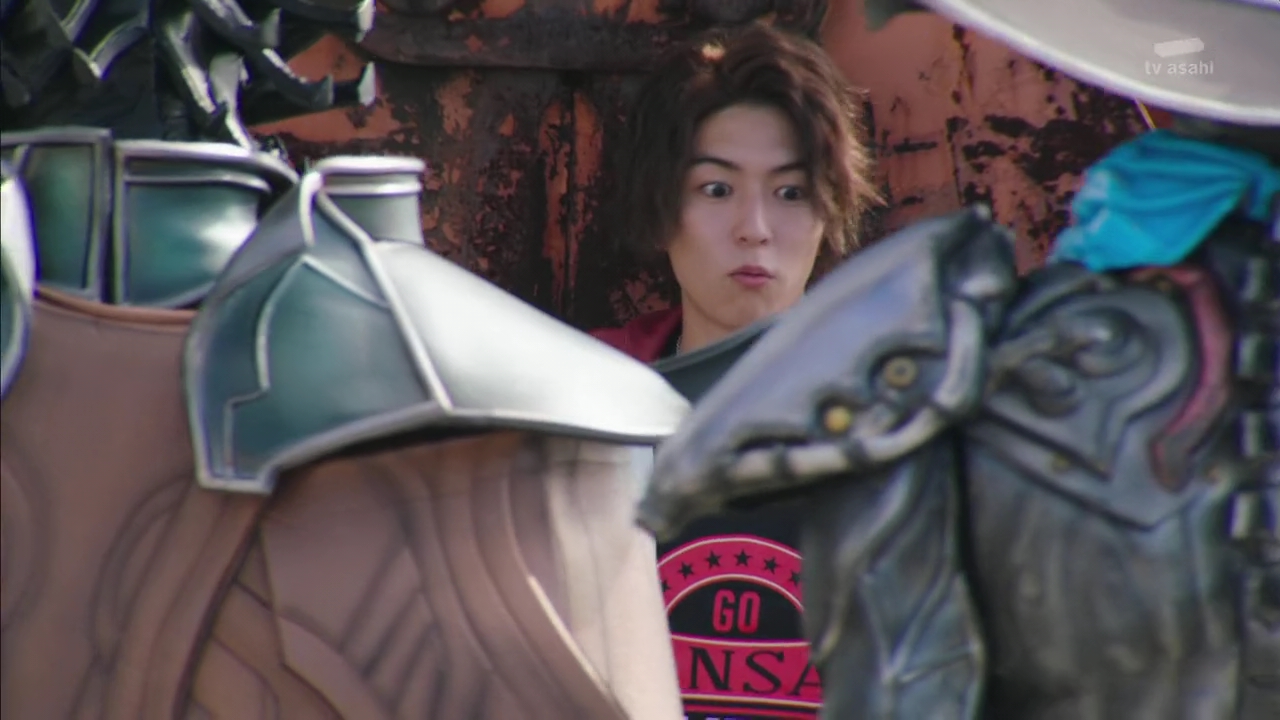 Gunman continues shooting at Gou as he runs. Kiriko comes flying in to return fire and her shots hit 018 right in the eyes.

018 initiates a Gravity Shift and both Kiriko and Gou are affected.

Signal Bikes arrive allowing Gou and Kiriko to move freely. He shoots at 018 and the bands drop out of him. 018 had been using several of them at the same time to try and slow his movement, but Gou was just holding back until he figured out the brother’s power.

Gou tells Kiriko to stand back. Kiriko doesn’t want to leave her brother. 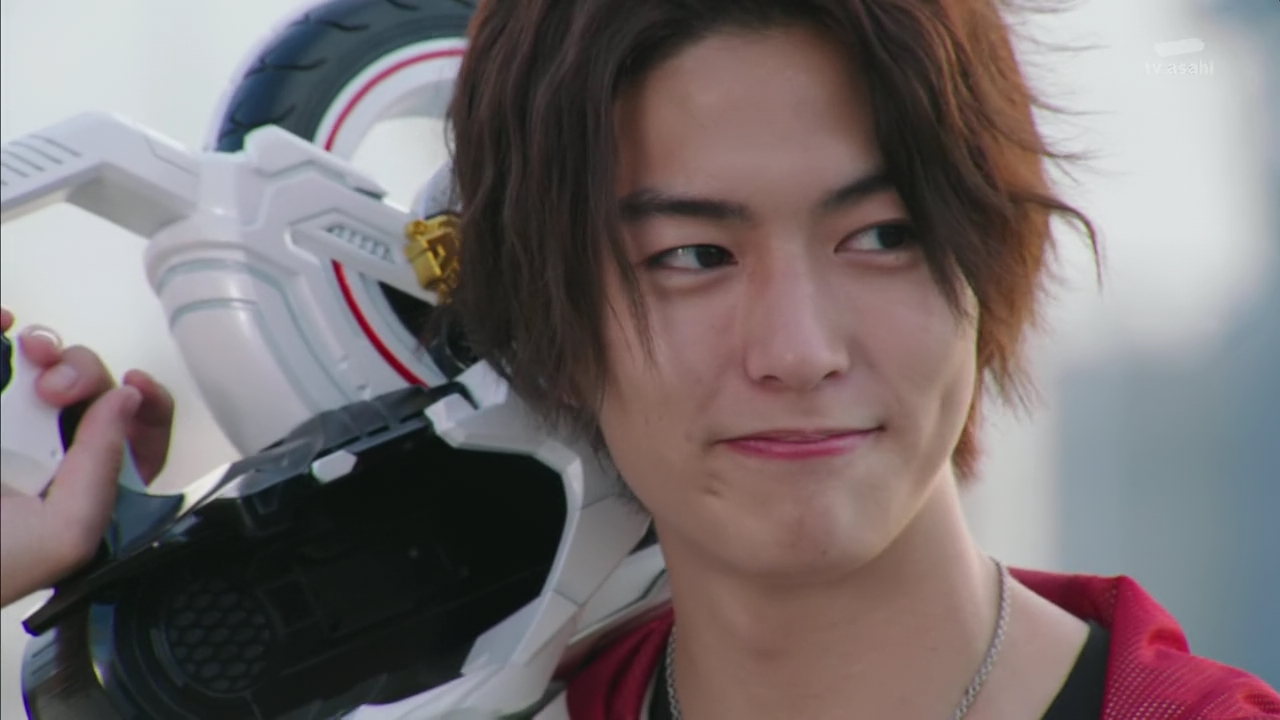 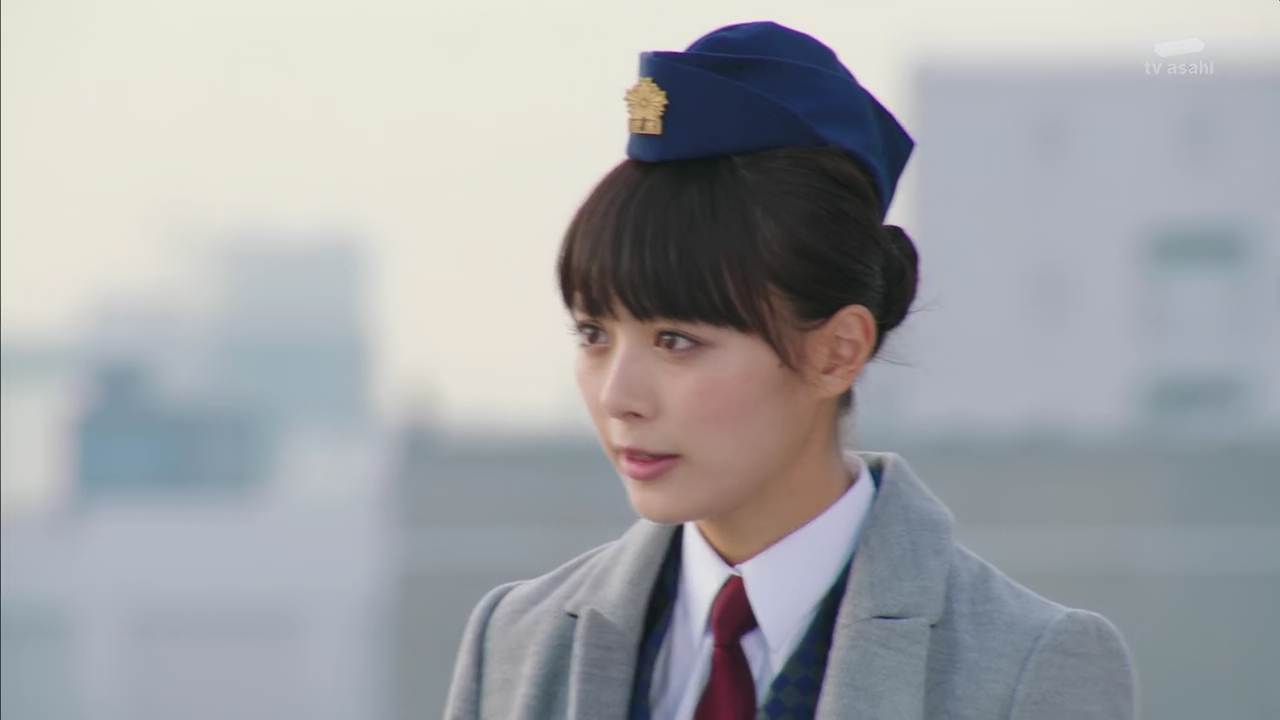 Kiriko gets to safety and Gou henshins.

Gou then proceeds to handily take care of the brothers. He uses the Danger Signal Bike and a big black shark-like thing pops out and chews on the Roidmudes.

Gou then uses the Stop Signal Bike and sends a big electrical stop sign towards them.

“It’s getting a little uncomfortable, so let’s finish this quickly, eh?”

Chase wants to turn his attention to Mach, but Medic appears and whisks him away, saying Gunman and 018’s cores cannot be revived. 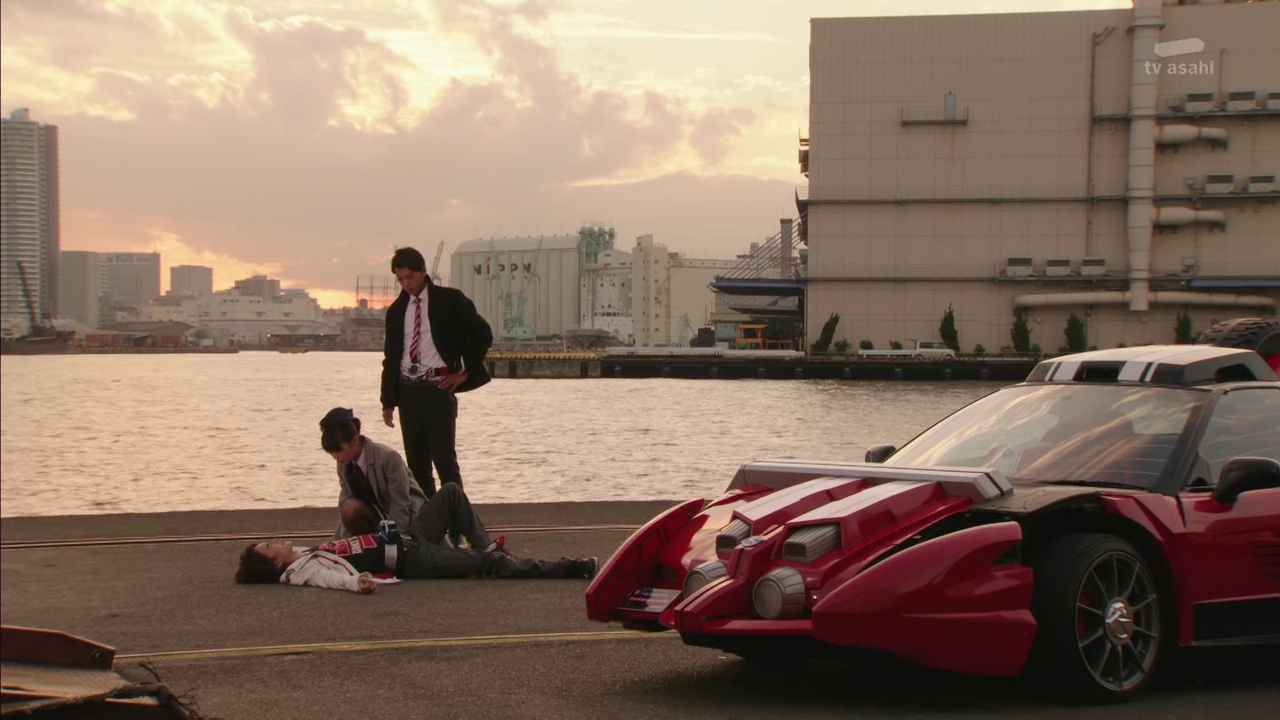 An exhausted Gou de-henshins and lays on the floor. He asks how many enemies are left and Belt-san says 88.

Gou drops fast asleep. “Such a goofball,” Kiriko says. But Shinnosuke says he’s not so sure. He’s not just some reckless thrill seeker. “There’s more to him than meets the eye.”

Back at the station cafeteria, the ladies are very smitten with Gou as he’s taken some nice pictures of them. They also want to see some pics of the Kamen Rider. 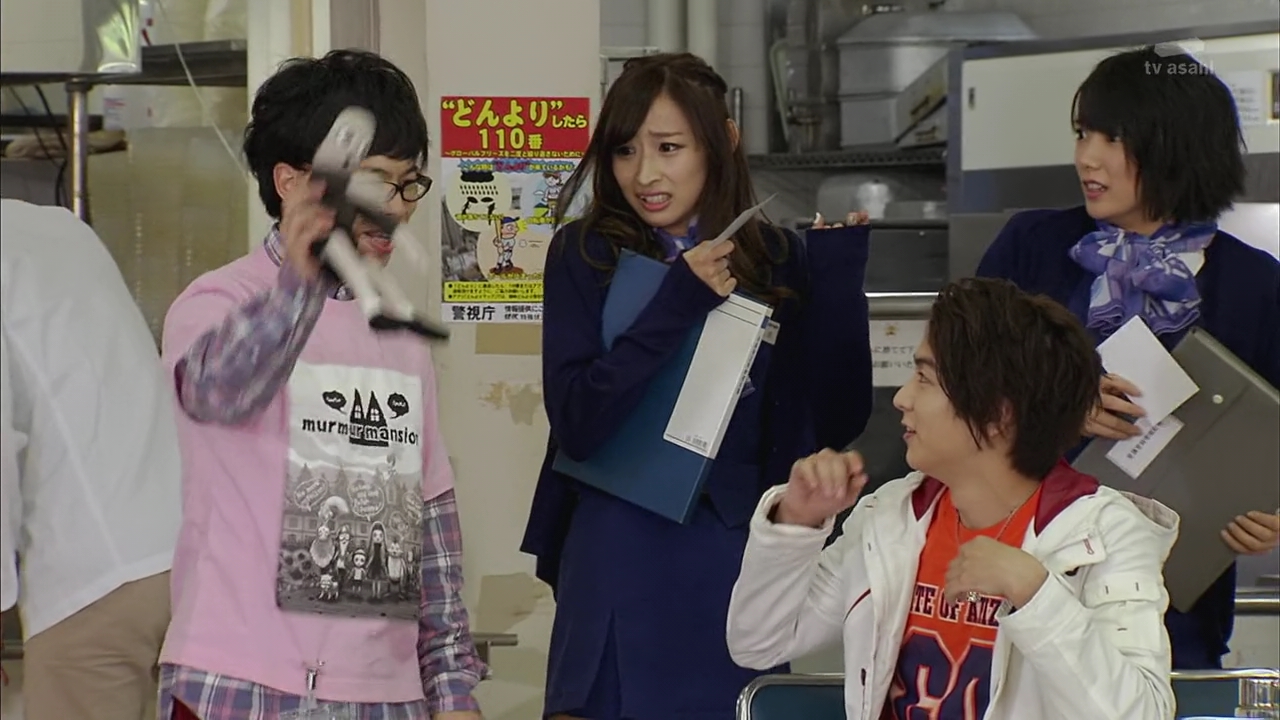 Kyu pops in and says he wants to see too. The girls start attacking him for being so creepy and gross.

Gou calls him “Niisan” again, but this time Shinnosuke says he doesn’t mind if Gou thinks of him as an older brother.

“You’d have been in serious trouble if I hadn’t made it in time. So I’ve got to keep my eye on you. I’ll be your brakes.”
“I wonder if you can keep up with me, Shin-niisan.”
“There’s no way a car enthusiast like me will get left behind by some biker. I won’t lose.”

Gou and his Shin-niisan bump fists.

Gou is awesome! He’s so much fun to watch. I loved seeing him be all badass when he was shooting up the pool hall hideaway. It’s fun seeing him play around and basically troll his new big bro and everyone else around him. But it was also nice to see him and Kiriko visit their parents and have a nice, calmer moment between them. It helped to add a little bit of depth to Gou other than being just cocky, mischievous and awesome.

And he’s a Shinnosuke-Kiriko shipper too lol.

Learning more about the Mach Driver and other people Belt-san has worked with helps expand the universe. Definitely some great teases for Gou’s story moving forward.

With Mr. 000 Chase, I think it’s become pretty obvious he’s connected to Kiriko in some way. And him mentioning losing his pre-Global Freeze memory just adds to the possibility that he is Proto Drive.

Speaking of Gravity Shifts, what were they trying to do with not using the usual slow-mo effect for the Heaviness? Yes, Gou was just trying to figure out what the Roidmudes were doing. But then he and Kiriko both were supposedly affected by the Heaviness. Doesn’t Kiriko wear a holster with Shift Cars all the time? And if they really were affected by those extra bands of Heaviness, why not use the usual effect instead of having the actors pretend to slow down?

But I guess it’s not just him since most everyone does the strange faces and double takes. I guess just a random quirk for the season. And I love fun, random things. lol