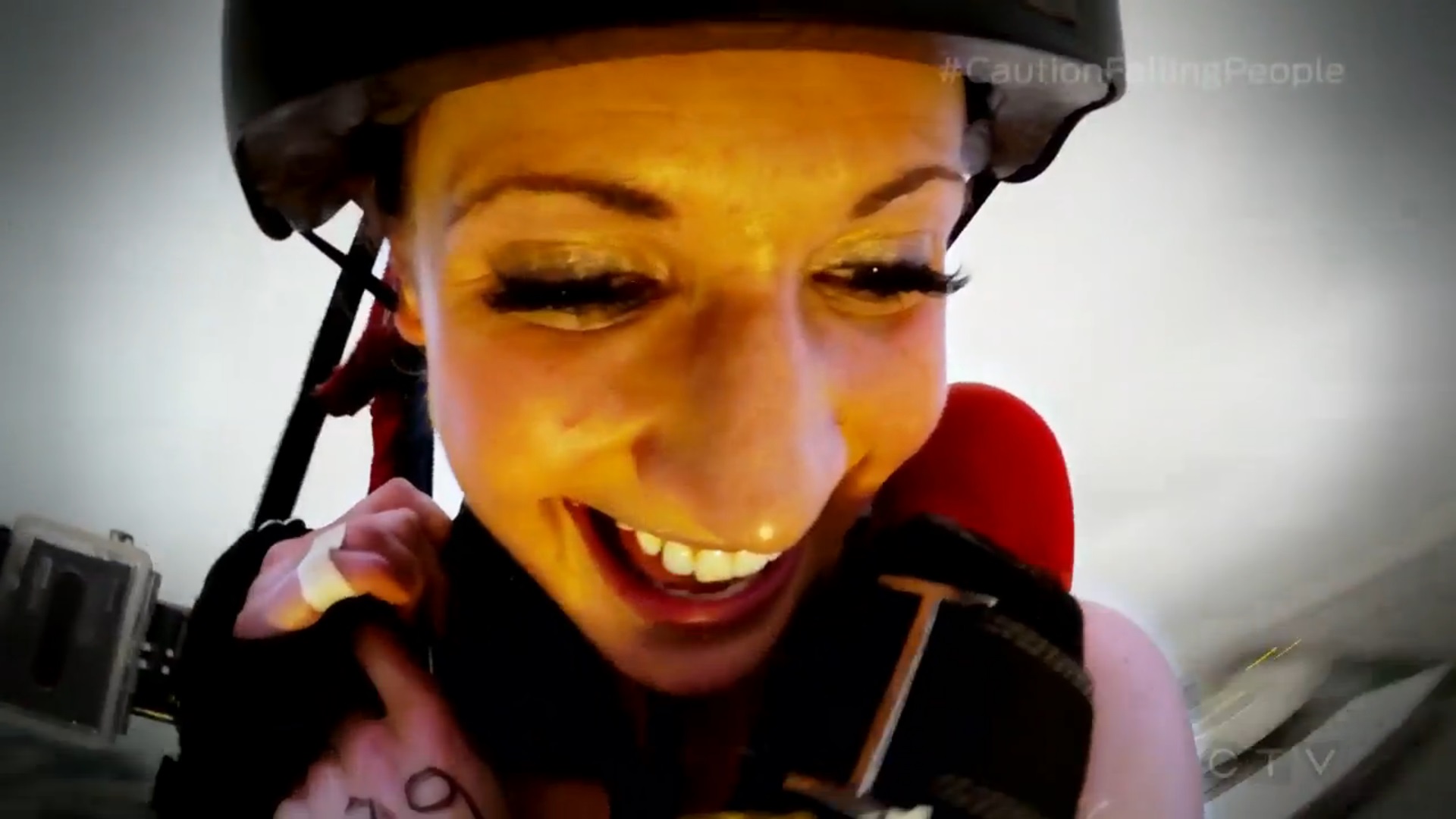 Teams begin the 4th Leg of the Race by hopping on a high speed ferry to Macau. There is a sign-up sheet at the TurboJET ferry terminal for two ferries, leaving at 4pm and 4:30pm.

Once teams arrive in Macau, they must head to the A-Ma Temple and take part in a traditional Buddhist ceremony to ward off evil spirits by lighting a string of firecrackers.

At the line for the taxi, Natalie & Meaghan work their charm on the man at the front, allowing them to bypass the queue and hop in a cab first. Pierre & Michel try to just cut in line, but Cormac & Nicole who are next in line will not have any of that.

Natalie & Meaghan stay in the lead and after they complete the ritual, they must head to Macau Tower. The other three teams are close behind as the 2nd ferry arrives.

For this Road Block, teams must jump 764 feet off the Macau Tower in the world’s highest bungee jump.

Meaghan decides to do the Road Block and they finish before any other team even arrives. They open the next clue pointing them to the shop selling almond biscuits on Happiness Street.

Michel, Cormac and Rob just start to fall out of the Tower as the 2nd ferry teams just finish the ritual at the temple. They all hurry to hop into taxis and Jinder, (a pantsless) Mickey and Rex manage to catch up at the Road Block. Alain & Audrey fall to last as they decide to run it instead of waiting for a taxi. 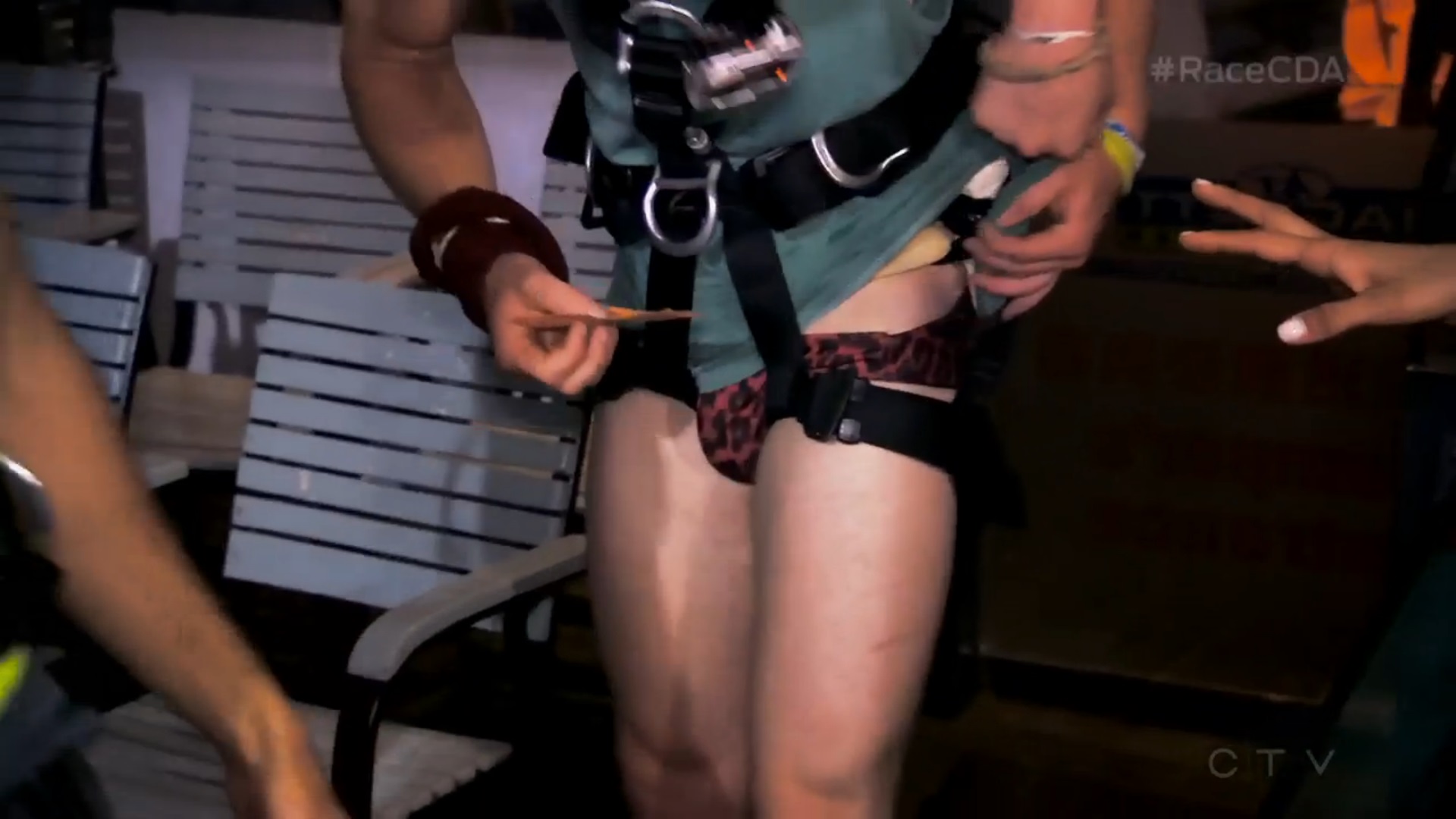 Natalie & Meaghan are having trouble finding the biscuit shop. Pierre & Michel, who hope to get the extra Express Pass, propose they work together. They trust each other, both being national athletes.

They finally find the clue and they find the Detour.
In Stamp It, teams will head to the Ruins of St. Paul’s to collect a blank scroll. They will then search for six shrines nearby, each with a different Chinese Good Fortune emblem which they must stamp on their scroll.
In Stomp It, teams head to Senado Square, don Portuguese costumes and perform a traditional Macanese folk dance. 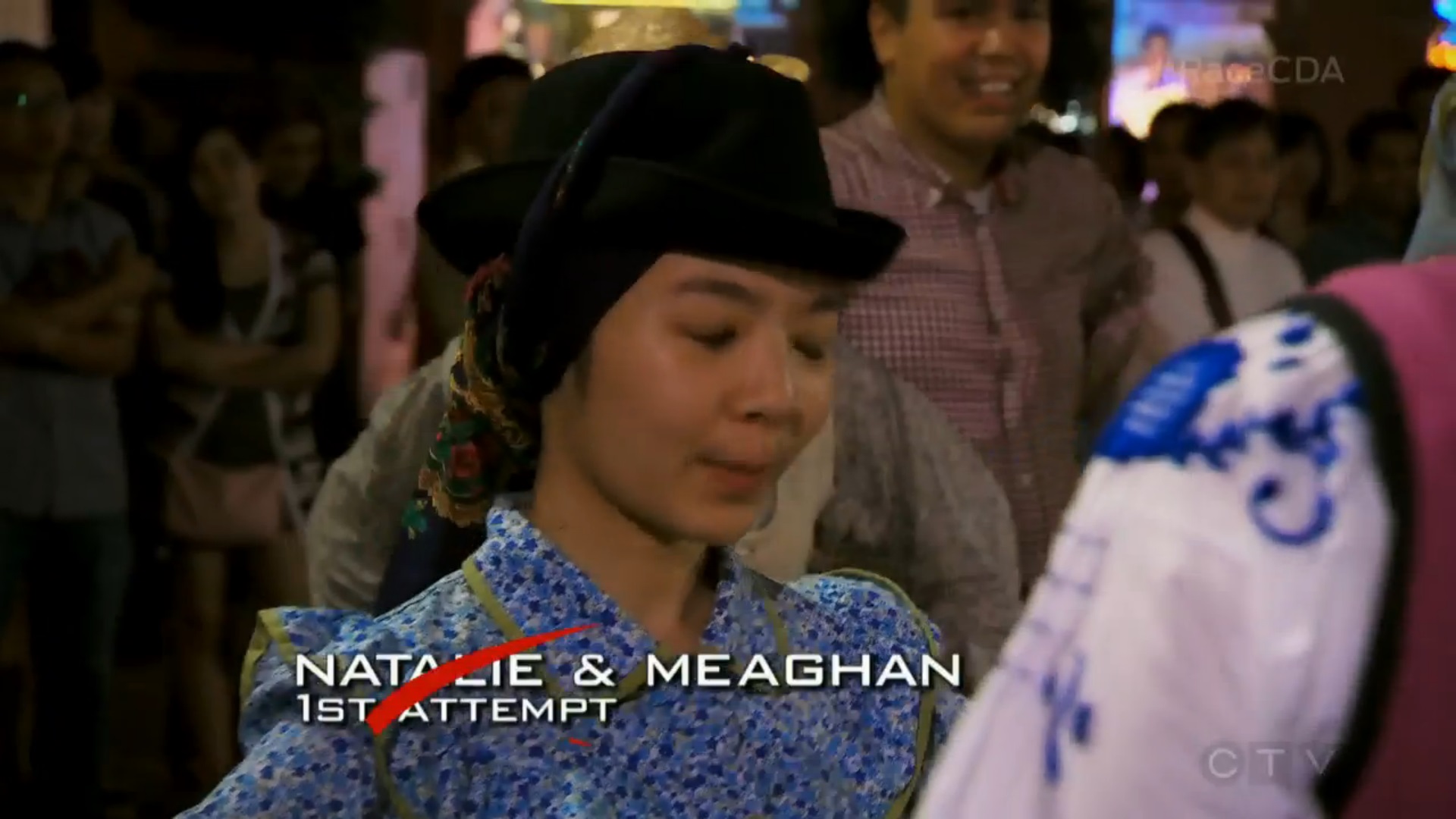 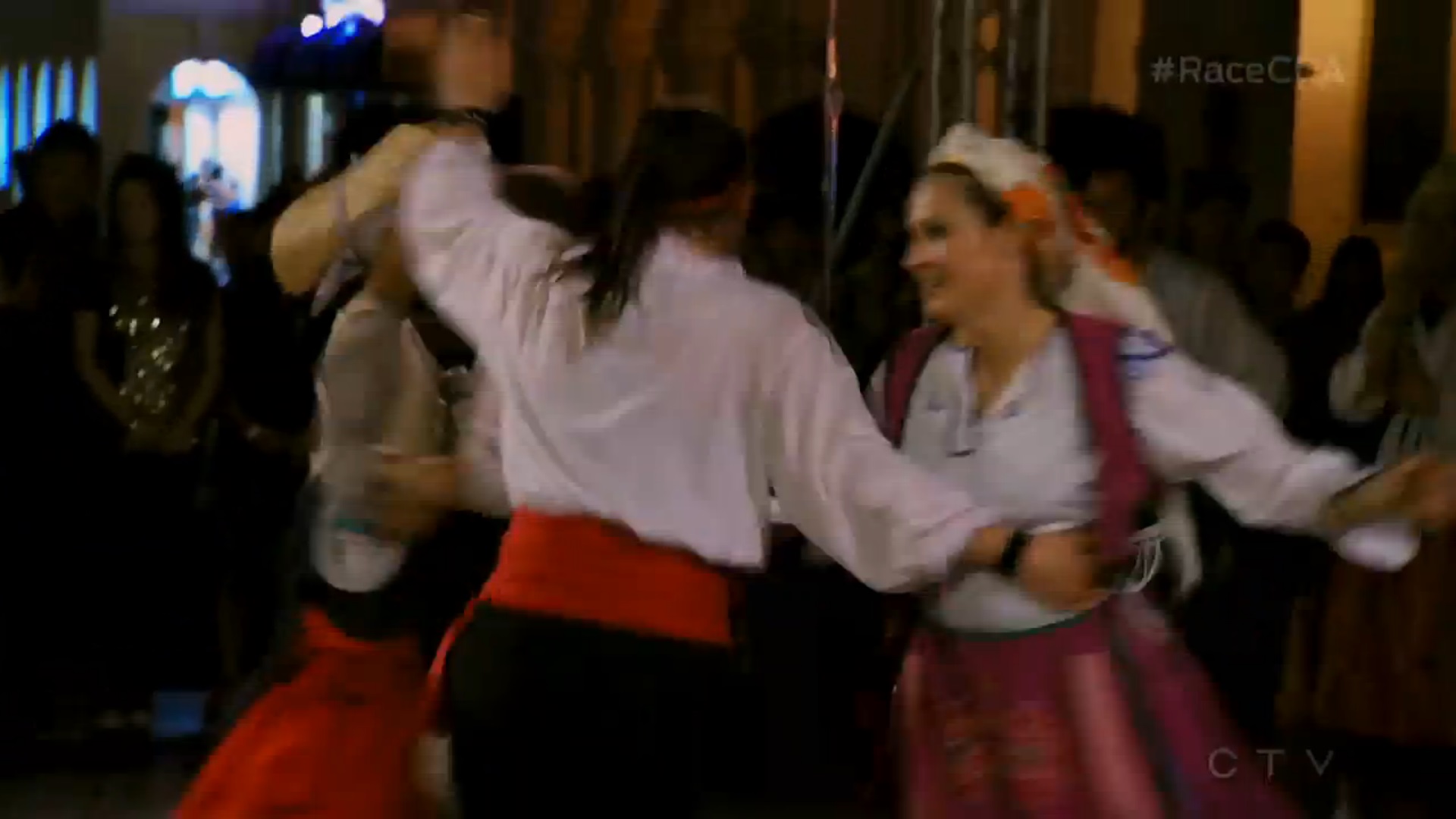 Meaghan is nervous about her being sucky at dancing while the twins are their usual ruffled French-speaking selves trying to get the hang of the dance. Natalie insists they try it out and they go, but they also get the thumbs down.

While Sukhi & Jinder walk right past the clue box at the almond biscuit shop, Ryan & Rob and Cormac & Nicole head to the Stomp It Detour.

Meaghan doesn’t like to learn in the circle even as Natalie believes they can learn more by trying it out. On their 3rd attempt, they get the thumbs up and they head to the Grand Lapa Hotel and learn how to play Fan-Tan by observing a game in progress. Once they’re able to get the hang of the game and satisfy the pit boss, they’ll get the next clue.

Sukhi & Jinder and Mickey & Pete still haven’t found the almond shop and they try to ask Rex & Bob who don’t tell them anything. Jinder again walks by the clue box, but they just leave until Mickey & Pete are the ones who find it later. Alain & Audrey also miss the cluebox on first look.

Pierre & Michel get the dance on their 6th attempt and head to try and catch up to the Olympians.

Sukhi & Jinder and Mickey & Pete watch Cormac & Nicole attempting the dancing and they decide to just switch Detours. Alain & Audrey arrive and decide it might be better to do the stamps as well.

Ryan & Rob get the dance on the 3rd attempt and are off. Rex & Bob get it on their 4th attempt. That leaves Cormac & Nicole alone at the dancing, but they get the thumbs up on their 6th attempt.

Natalie & Meaghan finally understand Fan-Tan and get the next clue telling them to navigate Macau’s underground paths starting at the Hotel Lisboa to find a hidden entrance to the Plaza de Ferreira do Amaral near the Grand Lisboa Hotel, the Pit Stop for this Leg of the Race.

Meanwhile, Mickey & Pete, Sukhi & Jinder and Alain & Audrey finish their Detour and head to the Fan-Tan. All the teams are there. Sukhi & Jinder are lost and try to ask others for help. 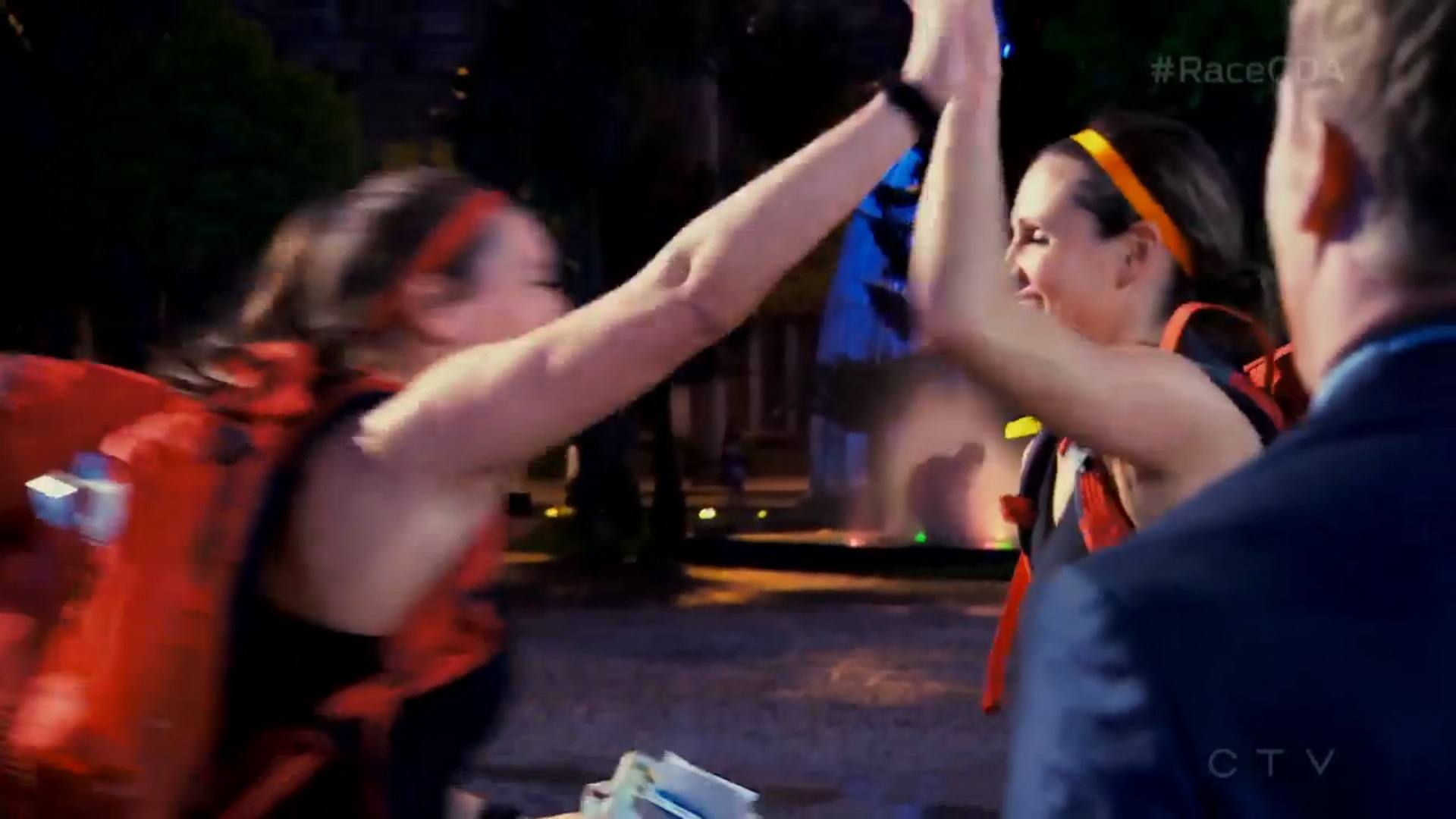 Natalie & Meaghan finally find Jon and they officially claim their 4th first place out of 4 Legs of the Race. They win a trip onboard Air Canada’s new Dreamliner to Tokyo and also $3000.

At the Fan-Tan, Rex & Bob figure it out, while also helping Alain & Audrey and they are off, followed by Cormac & Nicole. Rex & Bob finish 3rd and Cormac & Nicole take 4th. Pierre & Michel leave next and find Jon in 5th. Mickey & Pete take 6th.

Sukhi & Jinder try to ask Alain & Audrey for a clue, but as the last teams, Audrey says No Way. The couple gets the thumbs up and they leave.

After 5 minutes, Sukhi & Jinder finally finish and they hurry to find a taxi. It’s a foot race, but Alain & Audrey finish 7th.

Sukhi & Jinder are in last place, but Jon tells them this is a Non-Elimination Leg.

Episode Thoughts
A very exciting and another full episode and Leg. Again, it is awesome for TARC to head out of Canada. Kinda sad they’re heading back next week, but Air Canada limitations I guess.

The ferry separation was unnecessary. But the firecracker task was good. The Road Block was fine and the Detour equally balanced.

That cluebox in the random almond shop though was tricky hilarious. And that Fan-Tan… don’t even ask me to explain it. I have no idea.

It was great to set-up the Leg to be run at night in Macau. Just like having the TAR24 final Leg should’ve been awesome in Las Vegas at night, but when you have horrible tasks and two horrible teams, well, then that’s a waste.

A great, solid, exciting episode. Though I must say, I’m starting to definitely form my opinions on the teams.

Sukhi & Jinder are absolutely hilarious. They’re not that dumb, as they’ve shown in the previous Legs. But seeing their desperation this Leg coupled with their cluebox tunnelvision was hilarious to watch. I definitely am happy this was a Non-Elimination Leg and I hope they can recover fast.

I need more Alain & Audrey French meltdowns! That is when they are most fun and enjoyable. A team winning four Legs in a row, especially the first four Legs would really be annoying and upsetting most of the time, but Natalie & Meaghan are really working for those wins. And they are still great personalities, especially now with them being frazzled and tense this episode. Makes the competition more interesting if the dominant team isn’t some absolutely perfect team.

Mickey & Pete continue to be a fun team. I’m going to need more French scheming from Pierre & Michel. And Rex & Bob were okay.

Cormac & Nicole were fine as well, though they are steering a little too close to Dave & Connor’s exposition habit. Too much talking and commentary over no action. And Ryan & Rob are still pretty bland.